You people have no idea.

I have been waiting nearly ten years for this place to reopen. Not that I necessarily had high hopes for it or that I’m a huge Harry C. Barnes fan – it was more the principle of the thing. 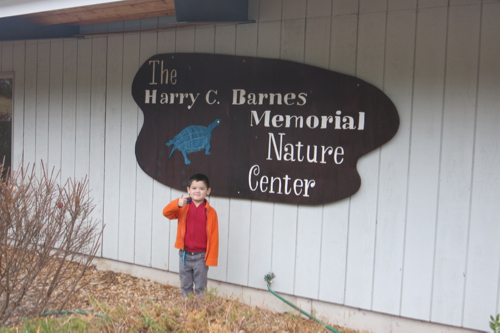 And again in 2008 when I revisted the trails there. 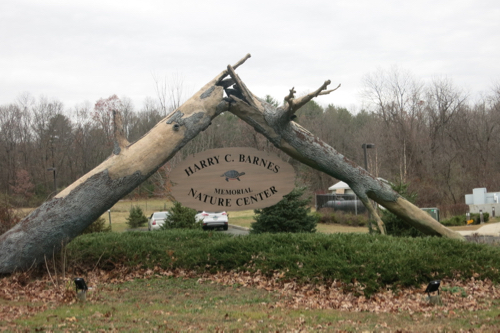 Online, they always promised they were “remodeling” and would reopen “soon.”

By 2012, I’d given up. But they hadn’t. Someone kept paying the bill for their website, so I kept them on my watch list.

I even drove in the parking lot a few times over the years to see if there had been any progress that I could see.

Then, amazingly, I got a note from an online friend/reader alerting me that this place had reopened! I almost didn’t believe it, but it was true. 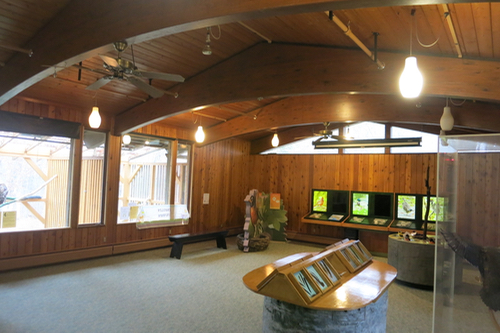 And here we are. At the Harry C. Barnes Nature Center on suburban Shrub Road in Bristol, CT. And you had no idea this thing even existed, let alone that I’ve been feverishly following its glacial progress for nearly a decade.

And speaking of parties… I happened to take my boys to the Barnes Nature Center during an Owl Party! 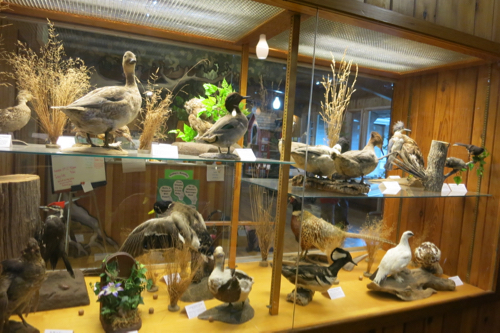 We had just finished a hike up in Burlington and I drove past this place to see if they were open. (No, this type of basic information was not listed on their website.) They were! And their marquee said they were having an Owl Party.

We drove down to grab some lunch in Bristol’s downtown first, and then returned.

First, and most importantly, the refurbished interior looks great. Really, really nice. There is still some work to be done, as the art gallery and Children’s Discovery Room are not yet open. So for now the center is three rooms that roughly break down thusly: One for the live animals, one for the stuffed birds, and one for the gift shop.

As this was the Owl Party, the whole day was about birds. The Barnes Nature Center is huge on birds. As one who enjoys the birds, that’s fine with me. 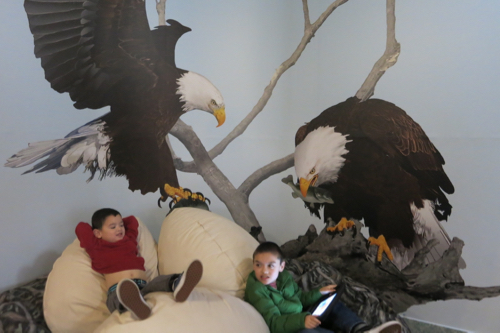 Their signature “thing” seems to be the giant eagle wall painting with the “nest.” I couldn’t quite get the perfect angle for a half-decent picture though. Still, this was kind of perfect for Damian to sit and chill out on.

If only every museum had a quiet corner with soft seating for our special needs population. Thanks Barnes Nature Center!

Calvin and I ventured around the room and first took in the two dead mouse exhibits. The first one was an artistic take on the history of altar sacrifice. 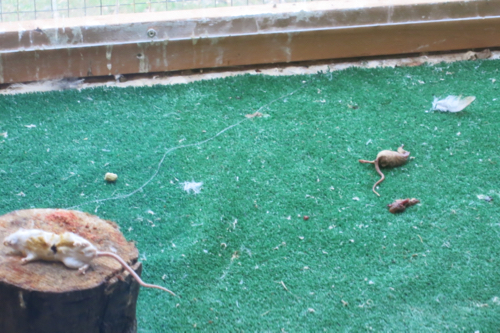 The second one was a bit more blunt; a modern interpretation of the classic “Three Blind Mice” that every child knows. 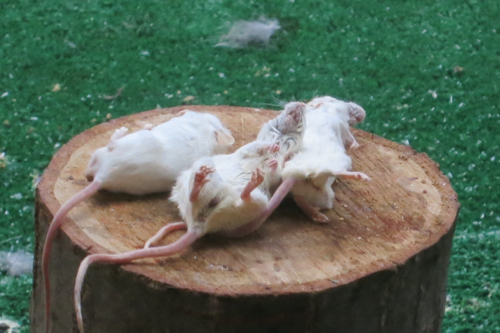 I applaud the Barnes again for being so cutting edge. Look out for next year’s Damien Hirst exhibits here in Bristol.

Interestingly, the Barnes mixes these avant-garde explorations of life and what it all means with some birds of prey. 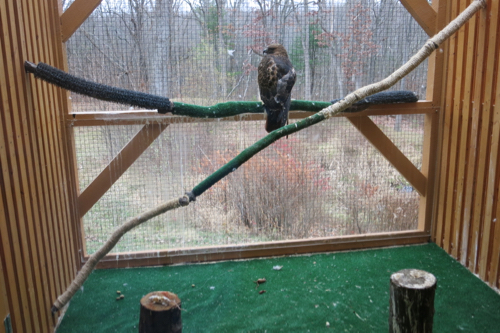 The star of the show, at least or the Owl Party we were accidentally attending, was HOODini, the Barred Owl. 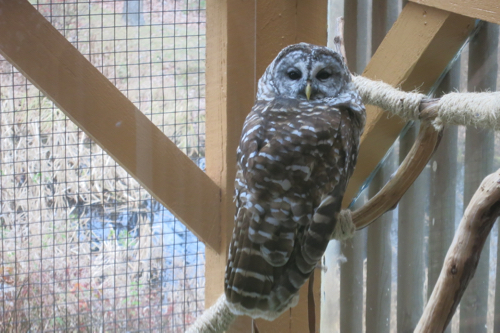 HOOdini really is a beautiful bird. Owls are just so rad. I’ve only seen a few in the wild around Connecticut, and have been so excited each time.

The “bird room” as I’ll call it, featured a bunch of magnetic bird beak/claw puzzles that Calvin rather enjoyed. As with all exhibits like this at every museum, one bird was broken and a couple pieces were missing. Fortunately, my kids are old museum pros so it wasn’t a big deal. 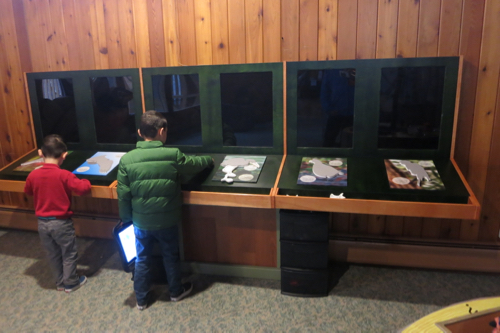 Damian found the plushy birds to his liking. When Damian is being “sweet,” he often does this thing where he puts whatever he “loves” up to his cheek in a “loving” way. Here, he felt the need to show the oriole some love: 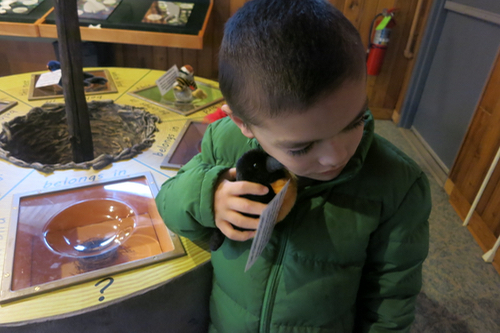 Calvin and I talked about the skulls for a while, as he’s starting to understand life and death and internal organs and comparative anatomy.

Wait, what? You don’t believe me? It’s totally true. 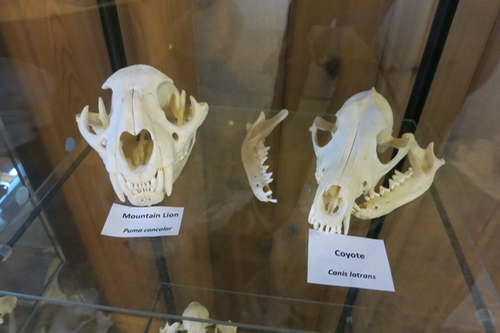 Over on the other side of the Barnes are the live animals as well as some other stuff. At this point, Calvin had been offered Owl Party cake a few times by the wonderfully kind staff, so all he was doing was going through the motions to get a piece of cake.

Anyway, here are some of the animals: 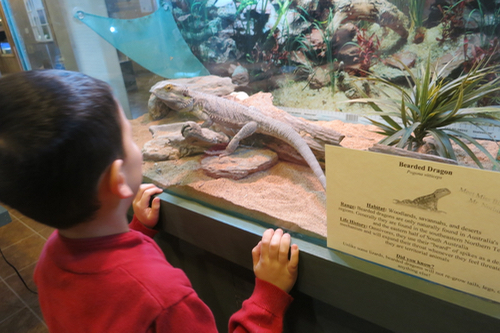 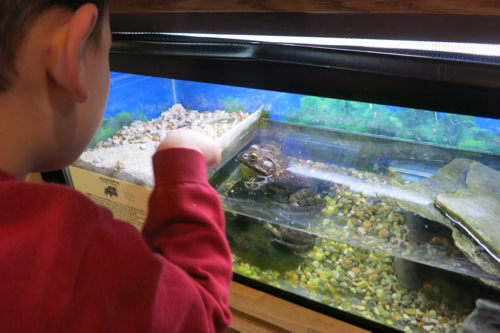 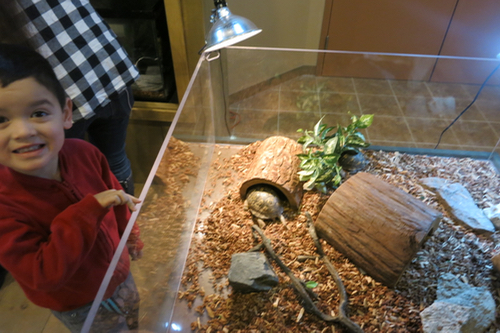 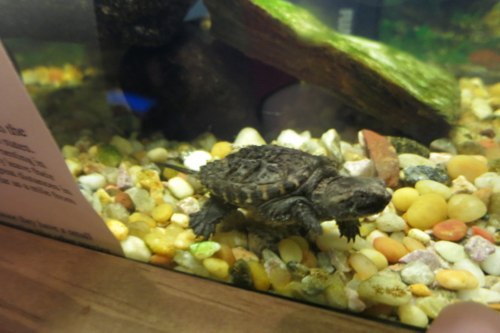 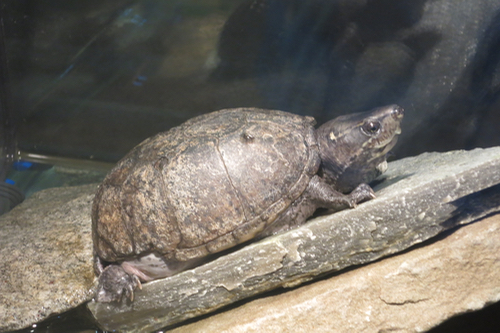 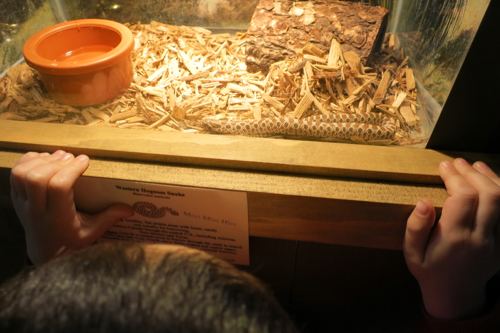 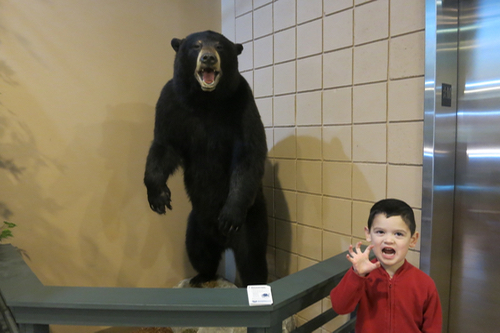 And I’m not sure why the Barnes features not only a mountain lion skull, but a full-on mounted mountain lion. Every other mounted animal on display here, I think, lives in Connecticut. By featuring this feline, I’m sure every fifth peson leaves here thinking we have a thriving mountain lion population. 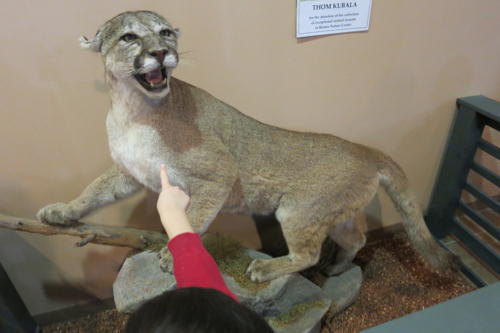 Anyway, there are some great hands-on things here, touching on all sorts of natural phenomena like magnetism and geology and anatomy and the like. I really enjoyed poking around this stuff with Calvin and watching him figure stuff out and learn. I think that’s kind of what parenting is all about.

That… and finally letting the child eat that dang piece of Owl Party cake. 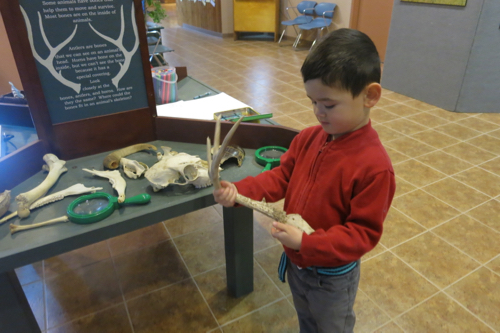 We started on an Owl Party Art Project, but Damian had reached the end of his rope, so we finished up and hit the road. 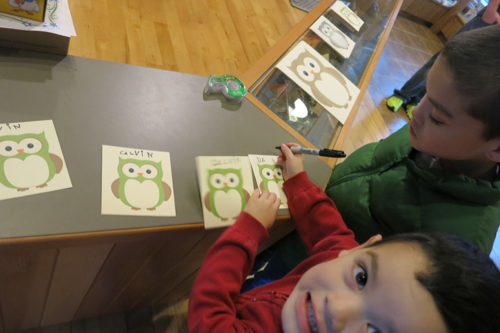 I’m very glad to see that the Barnes is reopened and apparently still growing and expanding. I didn’t ask about the forthcoming art gallery and Discovery Room, but they appeared to be nearing completion.

The trails here are really neat and the Tunxis black dot out back can carry you up to Massachusetts if you want it to – and really, you should.

Just watch out for all those mountain lions in Barkhamsted. 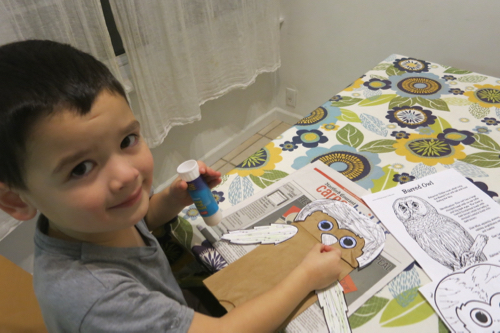 He enjoyed this much more than his face is telling you, I swear