2015 Update: A few of the Tunxis Trails in Burlington got a makeover in 2014, but not this one. So changes on this page are relatively few, thank goodness. But I’ve made them and now this page makes sense with the current trail revisions. Though now, 7 years after I wrote this page, the Barnes Nature Center is still closed is finally open in 2015! And we visited!.] 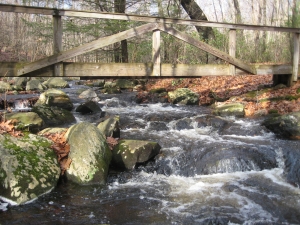 This little trail was my final trail in the jumble of Burlington area Tunxis Trail. For that reason, I’ll always love it.

You see, there are 8 trails here totaling somewhere over 30 miles I’d guess. I don’t feel like adding it up right now. After knocking out the 5 miles still needed on the Tunxis Yellow Dot in town, Rob Y spotted my car so I could finish up with this short trail. I never felt like doing the out-and-back myself and since the Barnes Nature Center at the Eastern end of the trail is closed for a while for remodeling, I couldn’t make it a family thing either. 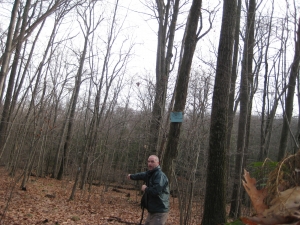 This was my chance, and I took it. I had low expectations of this trail going in – and I was stupid for that. This trail is really very nice and definitely fun – and a lot more challenging that I’d thought. I figured I’d almost jog the trail, call it a day, and hit the road.

After Rob dropped me off along East Chippens Hill Road, I entered the woods on the Yellow Dot Trail, followed it for about 25 feet, and hit the Nature Center Connector trailhead. There are three signs here showing directions and mileages for all the different Tunxis Trails in the area. This signage is very impressive, especially over there in a lightly hiked area. 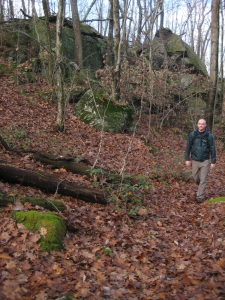 The purpose, if you will, of this little trail is to connect the Tunxis Trail network and Sessions Woods Nature Center to the Barnes Nature Center which is just over the town line in Bristol. Lest you think this would therefore be a simple little jaunt through the woods – as I did – I’m here to tell you it’s not. I had envisioned doing this with my wife and child to go to the nature center, and I’m quite glad I didn’t. 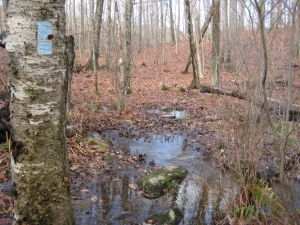 The first bit of the trail was soggy if not filled with standing or running water. Water and leaves and hills don’t mix well, but it was no biggie. There is, according to the book, a view: 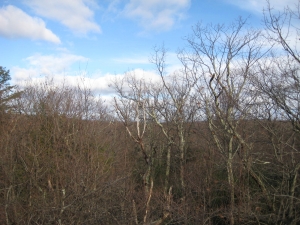 As you can see, it’s not the best one around town. After about three-quarters of a mile, the trail traverses the “Great Wall.” The Walk Book merely describes this as a big ol’ rock formation for the most part. I was completely surprised how much scrambling I was forced to do here. I judge these things by how often I had to use my hands – and the Great Wall had my hands on rocks and trees about six times. Yeah, my toddler would not have fared too well. 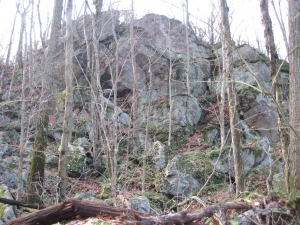 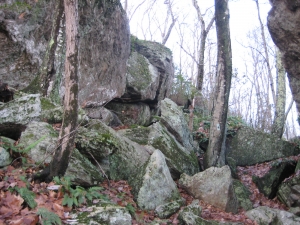 Of course, in my world, this makes for a better hike. This Great Wall thing is most certainly one of the least visited landmarks in the whole Burlington Tunxis system, but it’s worth the trek. It’s really cool; only a few shades less cool than the far more popular “Mile of Ledges” a couple miles to the west. 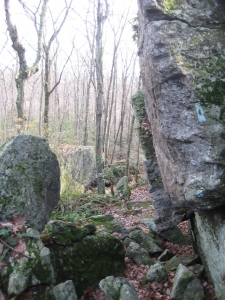 Once past that excitement, the trail took me down to a large brook called Negro Hill Brook. I dipped into Sessions Woods land for about 8 seconds before following the brook along its eastward path. And I got to thinking… Barack Obama just won the presidency and here I was hiking along Negro Hill Brook beside Negro Hill (in a town where only 0.59% of the population is black) on a trail marked by conspicuously black dots.

It all seemed to come together for me somehow. I was moved. 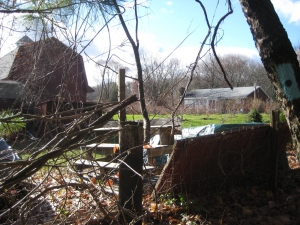 Moved to cross Route 69 via a barbed wired stile and hook back up with Negro Hill Brook as it wound its way behind houses and over rocks. The trail was really quite slippery here, but I was never in danger. Oddly, when the trail crosses South Main Street (an oddly named road here in town, as it’s only about an eighth of a mile long with a few buildings along it), it goes right through the parking lot of some machine repair shop of some sort. 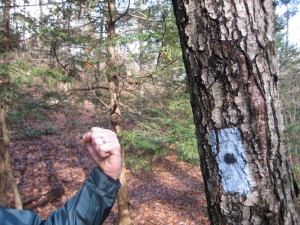 Let’s take a moment to delve into the history of the “Negro” names. I’ve consulted the excellent Burlington history page [2015: No longer exists] again and learn that it actually used to be called, you guessed it, N-word Hill and N-word Hill Brook. So now it’s Negro. Ahh, progress. (Actually, some folks have taken to calling it Falls Mountain Brook these days.) 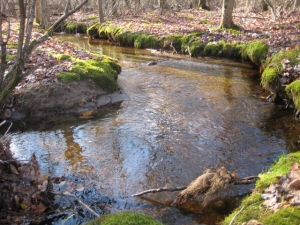 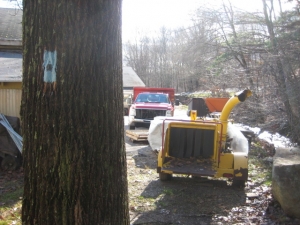 The trail took me through this parking lot

After that, the trail cozies up with the brook which is pretty cool; the brook here winds back and forth wildly and supposedly contains wild brook trout. Despite recent rains and the general wetness of the woods, the trail was actually pretty dry through here, and someone has nicely built us hikers plenty of bridges over the second half of the trail. 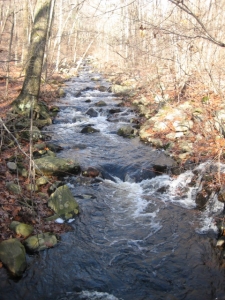 The last bit is sandwiched between the backyards of some houses to the west and the Barnes Nature Preserve to the East. It would have been nice to check out the nature center at the end of my day, but that will have to wait. 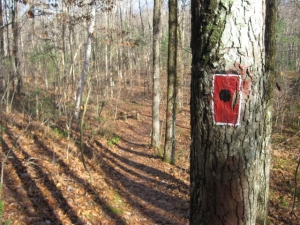 One of the Nature Preserve’s side trails. That blaze takes some serious commitment.

Again, this was my last bit of Tunxis Trail in Burlington, a town with tons of great hiking. I highly recommend that you spend a good amount of time exploring the woods here as well. And only then will you fully appreciate the excitement seen below: 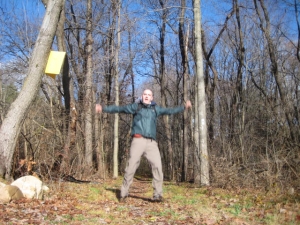