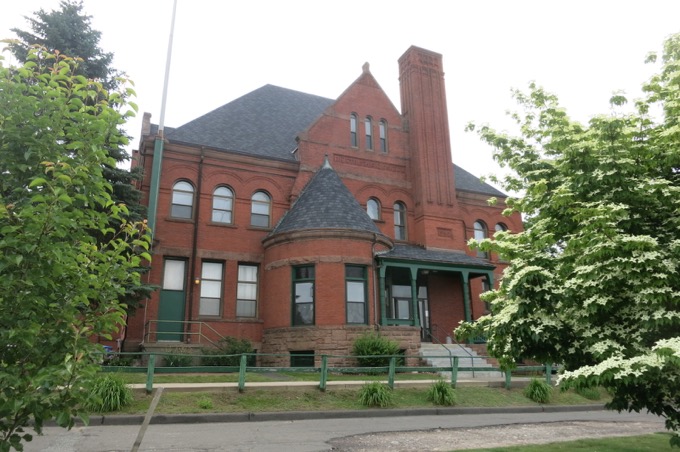 This was made easy by the fact that Bristol packs several museums into single buildings. Not just here at the Bristol Historical Society, but also over at the The New England Carousel Museum. Time it right, and you can hit not one, not two, but… eight museums in those two buildings!

(Yes, I’m stretching the definition of “museum” for my purposes, but my point remains.) 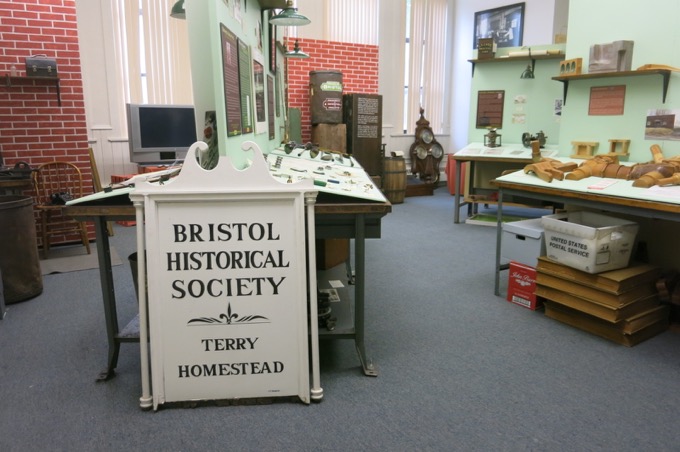 The Bristol Historical Society Museum is located in Bristol’s first high school on the corner of Summer and Center Streets. The brick Victorian building is built in the style known as Richardsonian Romanesque and it is fairly stunning. Built in 1894, it catches a lot of people by surprise who can be grumbly about certain parts of Bristol.

In addition to the town’s historical society museum, it houses the Bristol Sports Hall of Fame, the Bristol Memorial Military Museum, and the Witch’s Dungeon Classic Movie Museum. That last one moved here at some point after being housed in a trailer for decades across town. While I’m sure everyone welcomes the change – no more waiting outside in the long, cold line – it surely lost a bit of its kitschy appeal with the move inside. My 2006 visit was… interesting. 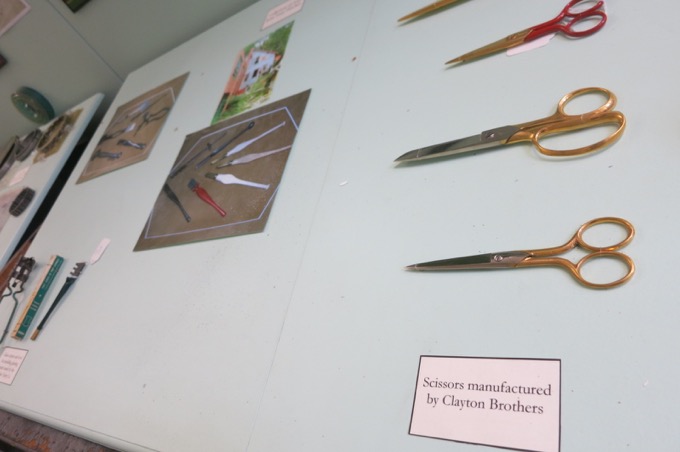 That museum only open on weekends in September and October, so Calvin – my partner for the day – wouldn’t get to enjoy the movie monsters. However, the BHS did have a few movie make-up and creature displays out as an homage.

While the building itself is rather huge, the history museum was scrunched into a couple small rooms during my visit. There’s a chance, I suppose, that it has expanded a bit and your experience will be a bit more organized, but I’m not sure.

Many town history museums are similarly set up: Too much stuff in too small of a space. How does one display the town’s impressive industrial past comprehensively if one only has a small room or two? 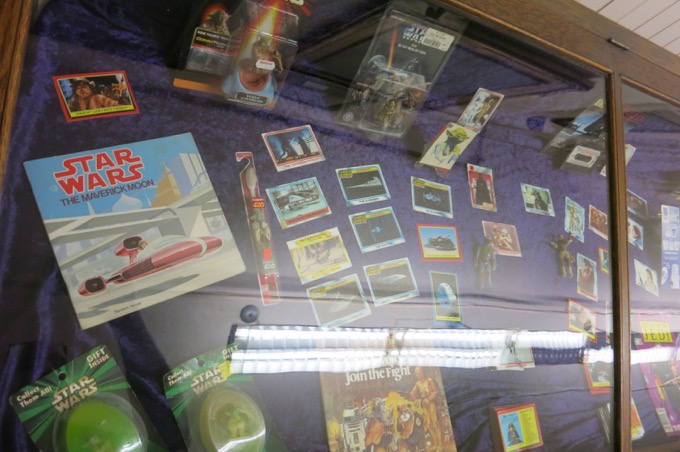 And now does one engage a five-year-old in such a place? One really smart way is to have a random display case of Star Wars collectibles for some reason. This draws ’em in. Gets ’em excited. Makes ’em think the whole place is going to be similarly awesome.

It’s brilliant. From there, our very attentive guide was able to convince Calvin that an old piano was really interesting, because look at these pedals here… 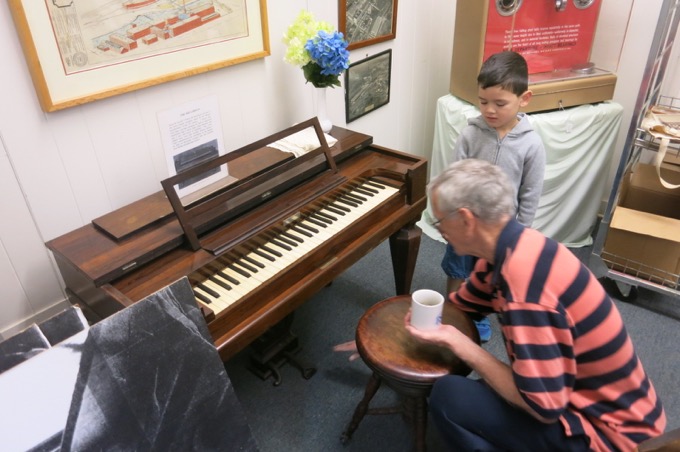 … and as the gentleman bent down to show how the pedals worked and changed the tone or pitch or whatever of the antique piano and then rose back up to see the joy on my young son’s face, and – 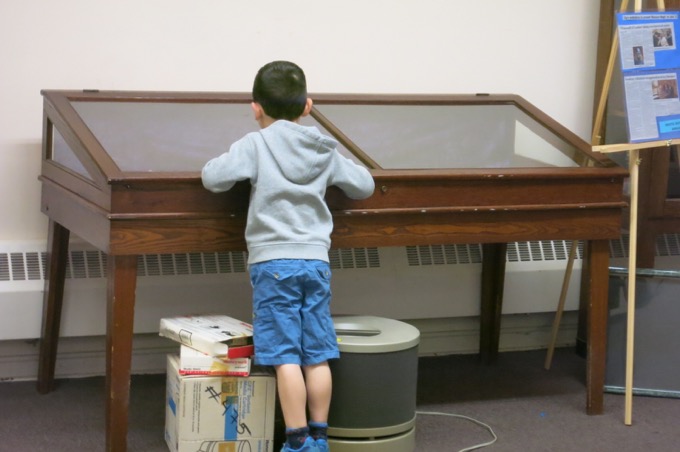 He’ll tell you what he’s gonna do. He’s gonna get Calvin back over to a different display. This time it was about the old trolley line that used to run through Bristol! Kids love trains and trolleys! 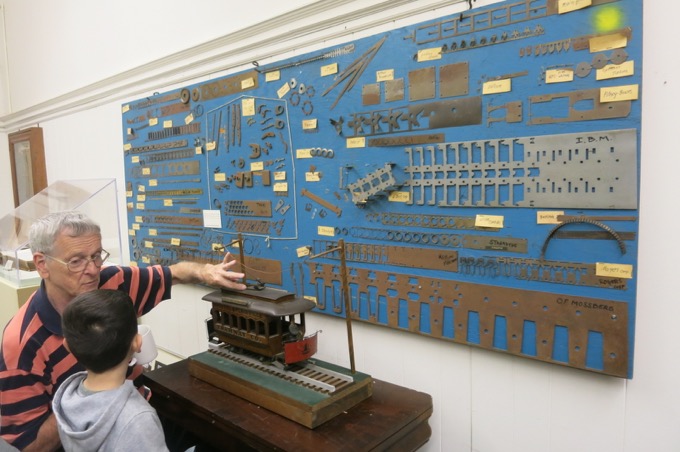 Calvin feigned interest in how the electricity flowed from the lines above the trolleys and how there were no cars back in the day and how it cost a nickel or whatever and how mechanized transportation changed the world in ways no one envisisioned, and –

Yoda. Chewy. Han. They had lightsabers and made the Kessel Run in less than twelve parsecs. Trolley, schmolley. Sorry sir, whattareyougonna do?

He’ll tell you what he’s gonna do. He’s gonna give up, that’s what he’s gonna do. “Hey Calvin, buddy, I’ve got something to show you that you’re really going to flip over!” Calvin glanced at me with “that look” but complied with our guide and followed him over to a forgotten corner of the place. With downcast eyes he slowly approached the new display case, looked up, and – 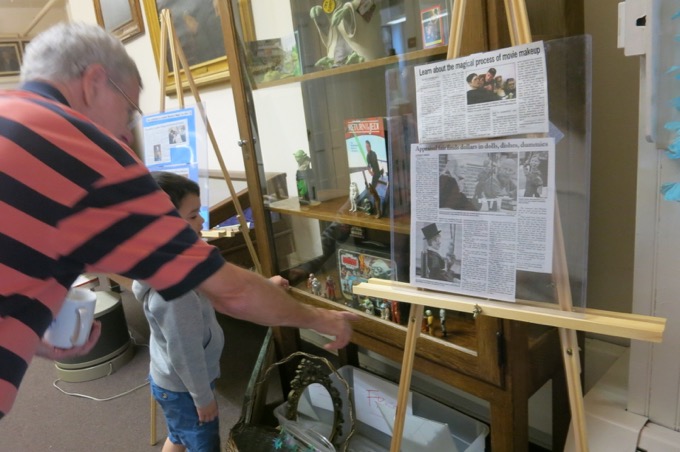 Whoa! More Star Wars stuff at the Bristol Historical Society Museum for some random reason! While those two discussed the Sith family line, I was able to poke around a bit on my own. There was a heavy focus on Bristol’s industrial prowess.

The exhibit was titled “Made in Bristol: Ingenuity+Invention+Industry.” A sign exclaimed, “People born in times more recent are often unaware of the number of products conceived and manufactured during Bristol’s industrial heyday.” In other words, “kids these days and their Star Wars.” 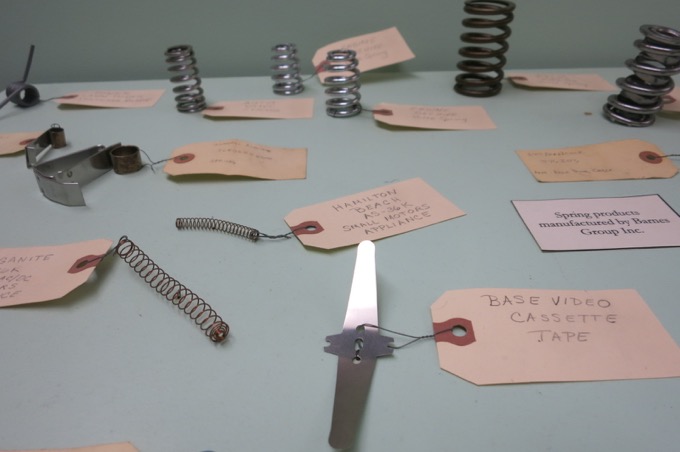 The museum set out to pay homage not just to the people who founded these factories and industries, but to those who worked in the factories as well. Which is nice, I suppose.

A big name in these parts is Case – Joel Tiffany Case to be specific. He was the main architect of Bristol’s beautiful Federal Hill houses, but was also an inventor and businessman in town. 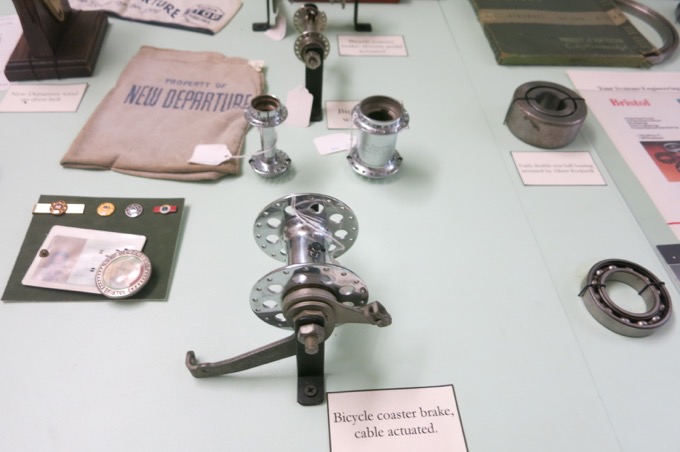 Case was into water wheels and grinding mills. He filed patents for these water-powered inventions and ran into some issues early on. But he forged ahead, partnered with J.H. Sessions (another big name ’round here) and created the Case Wheel and Mill Company that proved quite successful.

Another hugely successful Bristol company was New Departure. It’s also, perhaps, the best example of what’s happened to Connecticut industry and manufacturing from the late 19th century through today. 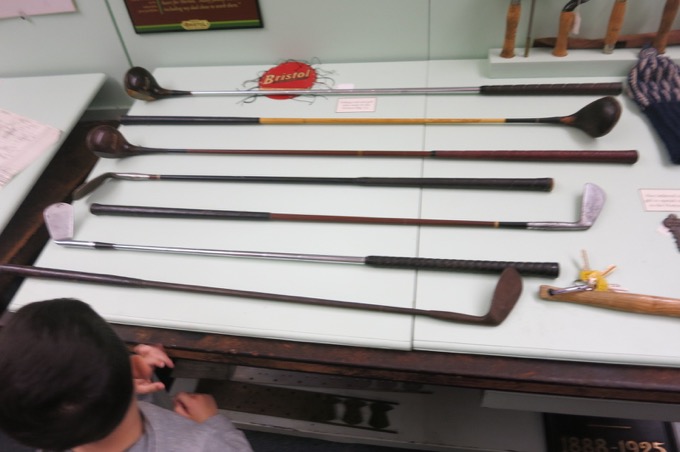 Two guys came to Bristol from Florida, drawn to its skilled clock-making industry. They invented a new kind of doorbell and set up shop. Then they invented the coaster brake for bicycles and expanded to a much larger factory. On a trip to Germany, one of the founders noted that ball bearings there were superior to what was being made in the US.

So he set out to make better ball bearings and was successful. So successful, that now the company was based in a massive Bristol complex making tons of money. The new auto industry was buying their ball bearings almost exclusively. It became Bristol’s largest employer for 50 years. 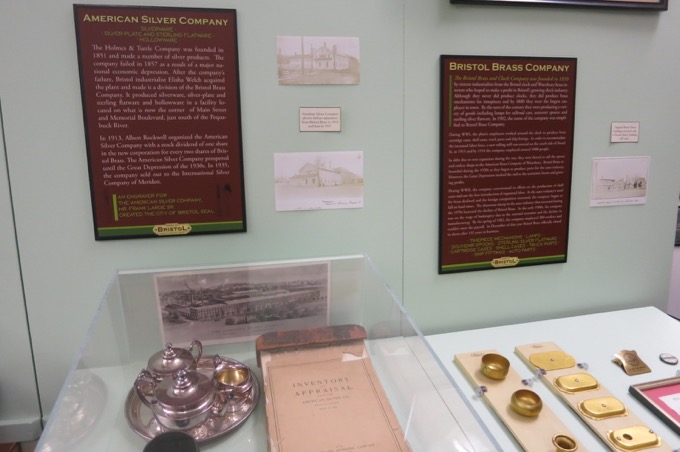 In 1919, New Departure effectively became part of General Motors. During World War II, the company became the world’s largest producer of precision bearings for planes, ships, jeeps and tanks, employing 11,000 people in the war effort. See? This was a massively impressive company!

In 1965, General Motors constructed a $15 million, 1.2 million-square-foot factory on Chippens Hill for its ball bearing, roller clutch and water pump business. The new factory opened in 1969. What could go wrong?!

Other than GM announcing the plant’s closure in 1994. The building was converted into rental space for various businesses, but supposedly remains the largest industrial building under one roof in New England. Which… is crazy. 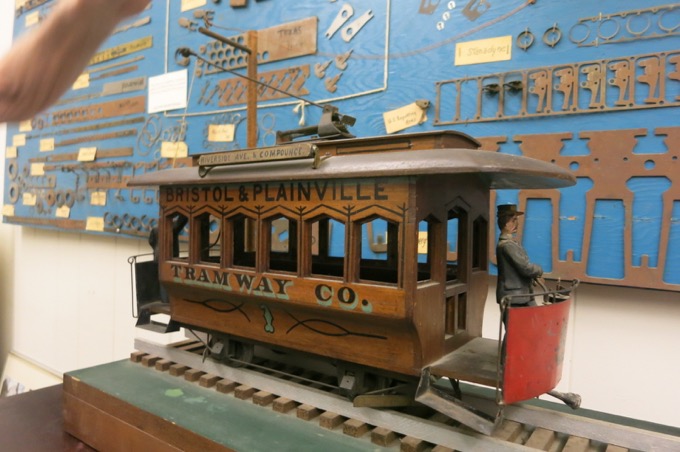 And I’d be remiss if I didn’t mention the Barnes Group. And happily, the Barnes Group is still active and profitable in Bristol after 150 years! Wallace Barnes started it back in 1857 with gumption, guile, and acumen. (It’s a long story, but he basically bartered and cajoled his way into making hoop skirts in an efficient and profitable way which led to spring manufacture which led to today being a global manufacturer of complex fabricated and precision machined components and assemblies for OEM turbine engines, airframe and industrial gas turbine builders, and the military. 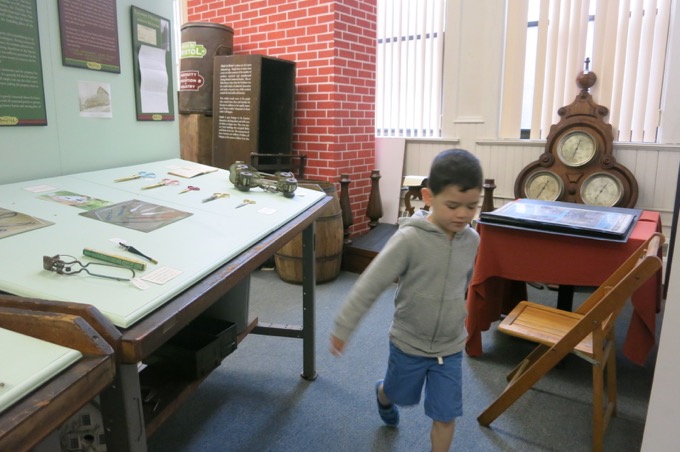 I’m happy to end this page on that positive note. Bristol has taken a lot of tough hits over the last half century, but there are beacons of success and hope all around the town. ESPN, obviously, but also The Barnes Group and Firefly Brewing and an ever hopeful downtown revitalization program.

Oh, and the Bristol Historical Society Museum with its landspeeders. Of course. 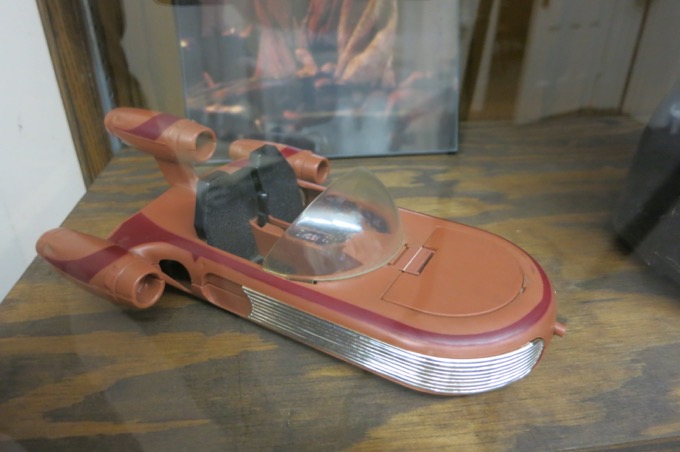