My visit up to Somers was perhaps one of my most random forays ever done for this website. One fine Saturday I remember just putting Damian down to nap and telling Hoang I had to just “go.” When you have a special needs child and you’ve just spent 6 hours entertaining him, sometimes taking off for two hours is just what the doctor ordered.

And since my visit was random, I promise that this write-up will be equally so. 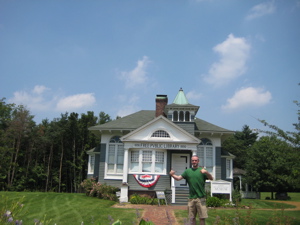 I noticed that this place had a rare open day, so I pointed my car north and took off. I don’t think I had ever been to Somers with intent before. From what I saw, it seemed just like all the other northern rural east of the Connecticut Connecticut towns. The Shenipsit Trail does traverse Soapstone Mountain here, which looks to be very pretty.

I found the museum easily and entered. This was yet another one of those places where I was the only visitor in the one room, so taking pictures and notes still just seems so… so difficult to do. As a result, my pictures are of the “quick with no flash” variety, hence the blurriness and lack of attention to detail. But you’ve seen these things before… at just about every other town historical society museum. Their (2008) website boasts displays of the following: 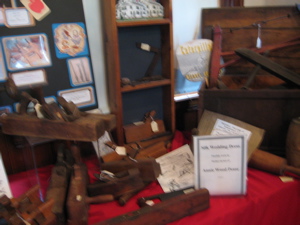 Interestingly, there was a small room off the main room wherein all sorts of Somers goodies were available for sale. Not (yet) being a big Somers fan, I didn’t purchase anything. But at this point, one of the women sought me out to probe… I’m used to this by now, however.

But she (Carole Pyne) was very nice. We talked about CTMQ for a while and she proudly showed my the photo album depicting the move of the old Somers Library to the current location of the building on the Somers Common – now the museum. Quite honestly, that was the most interesting thing about my visit – a few years ago excavators moved this entire building a good ways to preserve it. 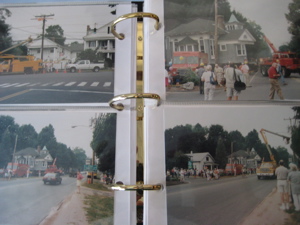 I don’t know what this means, but the brochure also mentions a horse from Somers that was ridden by Stonewall Jackson at the Battle of Chancellorsville. I probably should have talked to Ms. Pyne some more. Because my entire notes from this visit are: “Old tools/dresses. Gotz Doll – “African girl.” 1951 CT Valley HL. Old PO stuff. Alice Woods Pease. Percoski Rm And store. Somersville mill and shirts, coats. wool – cashmere – posters. Blacksmith. Ice tongs. William Collins portrait.” 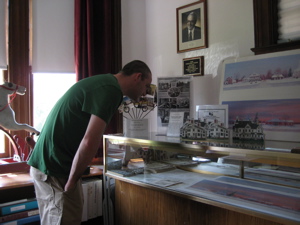 (Stonewall Jackson – Old Sorrel – formerly a Union officer’s mount, was acquired by Jackson at Harpers Ferry when she was about eleven years old. Because the mare was so small that Jackson’s feet nearly dragged the ground, she was often known as Little Sorrel. Little Sorrel Lane in Somers, Connecticut, commemorates the animal Jackson was riding when he was mortally wounded.) 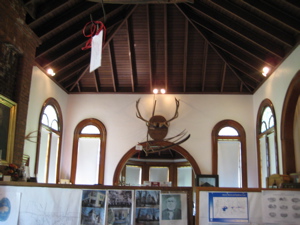 Now… don’t you feel like you’ve been there? No? Okay, here’s a pared down article that Ms. Pyne was kind enough to email to me after my visit. This was written by Allison Brooks Collins, Architectural Conservator in 1998 and at least explains my last “William Collins portrait” note. It also explains a heck of a lot more about the building itself:

Searching for buried treasure in Somers? Too late! Somers Historical Society, Inc. has already seized the most priceless gem in town–The Free Public Library, an 1896 structure endowed not only with sparkling style, but also with “moving” history. In fact, the Society’s headquarters, now hailed The Somers Historical Society Museum, has recently ascended from neglect to prominence as a result of its relocation from its original site on 547 Main Street to the newly-founded Somers Common on 11 Battle Street, Somers. There, perched atop a small knoll, this one-and-a-half story architectural jewel, with its copper-encrusted turret and flora-entangled art glass, beams and beckons with its distinctive style and its equally distinguished history. 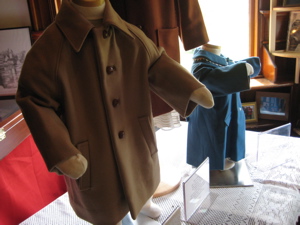 Eighty-six-year-old Laurinda Collins Whitney (then of Brookline Massachusetts) erected The Free Public Library on Main Street in 1896 in reverent memorial to her father, William Collins… From 1896 until 1965, the structure functioned as the sole public library for the town of Somers. Later, it served as a display and storage facility for The Somers Historical Society, Inc., remaining as such until September 5, 1996. On that monumental occasion, the building’s compelling past was translated, quite literally, into “moving” history; the structure was gingerly transported from its original Main Street site and deposited at the summit of Somers Common, where it resides today as The Somers Historical Society Museum. 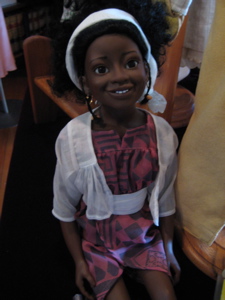 Stylistically, the National Register of Historic Places has designated this structure as “eclectic.” Indeed, its architecture defies classification as any one distinct style. Instead, it fuses signature traits from a multitude of styles, primarily Colonial Revival and Queen Anne with vestiges of Georgian and Greek Revival interspersed. The Georgian (18th c.) Influence, for instance, can be witnessed in the moderately-pitched hip roof, the centralized chimney, and the dentilated cornice. However, the Greek Revival style seems to have inspired the central porch pediment, the emphatic entablature (series of moldings) below, and the pair of smooth, Roman Doric columns which flank the front facade. 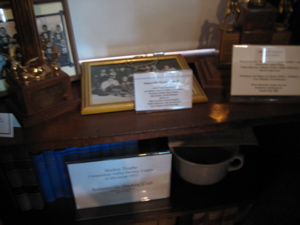 In the grand Victorian tradition, the building exhibits the asymmetrical massing so typical of the picturesque Queen Anne style, embraced by the American culture from 1880-1910. The design further references the Queen Anne style in that it strives to vigorously dispel the monotony of flat surfaces, it walls being enlivened not only by a square, arcaded turret, but also by flared bay and bow windows. In addition, the substantial roof overhang, the eave-line brackets, and the shingled/paneled wall surfaces also serve to infuse the exterior with Queen Anne vitality.

Structurally, the museum melds a multiplicity of construction techniques, ranged from Queen Anne balloon framing, which permitted animated and angular facades, to more traditional timber framing, which predominated up until the mid-nineteenth century. As for the building’s fenestration, its windows are as eclectic and ribald as the structure itself. Among the most striking in the collection are the recently-restored, blind arch windows which portray, in opalescent art glass, a golden lamp, superimposed over a globe and festooned with ribbons and vines.

Accompanying these leaded panels on the front facade is an equally striking bow window; each of its three sash windows possesses sixteen bull’s-eye panes over a single curved pane. From colored glass to curved glass to configuration of panes (multiple over single), these windows herald the Queen Anne style, while the pairing of windows hallmarks the Colonial Revival style (in pure, original Colonial, windows appeared individually). This intermingling of Queen Anne and Colonial Revival is quite typical because these styles were introduced more or less concurrently in the last two decades of then nineteenth century. One architectural critic has been observed, “The Early Colonial Revival borrowed eighteenth century details and applied them to simplified Queen Anne” –a statement which confirms this building’s derivation from a medley of styles.

Thus, historically and stylistically, this architectural treasure no longer remains buried. So put away this treasure map and experience this marvel firsthand. As one seventy-eight -year-old Somers native commented during the 1996 relocation, “I spent half my life in there. That was the most popular place in town…Natives of this town are proud of this building.” May it “sparkle and move” for generations to come!

Agreed. Now if you can figure out when to visit, by all means – get up to Somers! 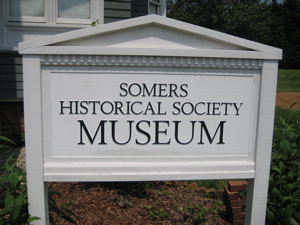