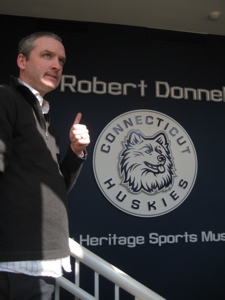 Man, this place is so classy it should be called the Husky Hermitage Sports Museum. And that’s sort of a problem… But more on that later.

I started out my day of UConn museum-going at the Lodewick Visitor’s Center (which was a dirt patch when I was in school.) I learned a few fun facts about UConn there. Facts like: UConn has stood as the top public university in New England for ten consecutive years! Forty percent of Storrs freshmen entering UConn in the fall of 2007 were ranked in the top 10 percent of their high school class! And, Minority freshman enrollment at Storrs and the regional campuses has doubled since 1996! That must mean there are 22 African-Americans there now! Progress!

This sparkling new center is a nice way to start anyone’s day in Storrs and even though I knew my itinerary for the day, it was good to get my bearings and a new campus map – especially since the campus is pretty much completely different from my days here 15 years ago. 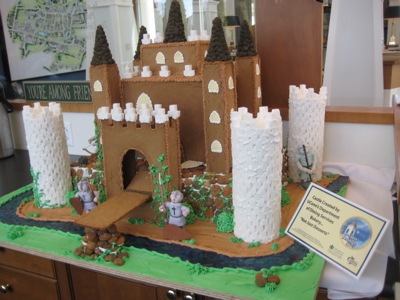 My favorite display in the Lodewick: A food castle made by the top-notch dining staff! Why? I have no idea.

By the way, it was just pointed out to me that I’ve now lived half my life in Delaware and half in Connecticut (18 years each.) That’s kind of cool… Sure is a better age related stat than when I took Damian to a UConn football game and my friend Twilley noted – after we enjoyed watching the cheerleaders for a few minutes – “Those freshman cheerleaders are closer in age to Damian (who was 2) than to you!” (who was 35.) 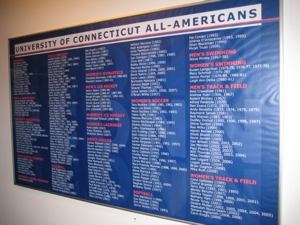 Talk about a punch in the gut. Then again, it wouldn’t matter as Damian’s cute factor is 10 time my own anyway. And speaking of getting older, walking around my alma mater as a 36 year old is kind of weird. I felt a little creepy so I pretended in my head that I was a hot young professor. I should have worn fake glasses and a sports jacket with patches on the elbows.

I trudged up the hill to the (also) newly expanded UConn Alumni Center and was reminded quickly of my long – always freezing cold – walks to class around here. With Gampel Pavilion gleaming in the distance, as well as the new field hockey/track complex and the recently mothballed football stadium (in favor of the brand new football stadium in East Hartford), I entered the Alumni Center. 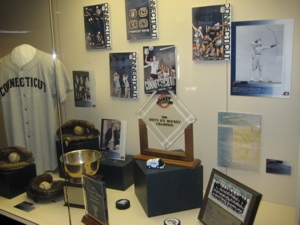 If you sense a theme here, you’re on the ball. Everything at UConn is new in the last 10 years. Much of it is sports-related, but I must give credit to the state and the university for also dumping a few hundred million dollars into the academics and the infrastructure as well. It’s really quite impressive and pretty much the only positive legacy our felonious former governor Roland left us. 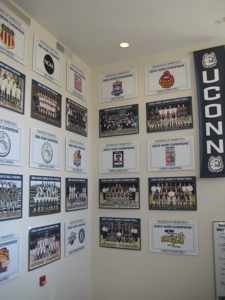 And yet, there is one point I must complain about. As I entered the J. Robert Donnelly Husky Heritage Sports Museum, which was at least subsidized in part by one J. Robert Donnelly (who knows, he may have footed the entire bill), I was struck by how modern, clean and large it was. It’s very impressive… Sort of like the Hermitage.

But just a week or two before my campus trek, UConn released some disheartening news regarding the potential closure of two campus museums. The previously visited Connecticut Natural History Museum and the William Benton Museum of Art – on my itinerary later in the day. More scare tactics perhaps, but I noted that no one dared suggest the closure of the sports museum. Or, blasphemy! reducing a few money-losing sports teams (which they all actually are, save perhaps men’s basketball.) Anyway… 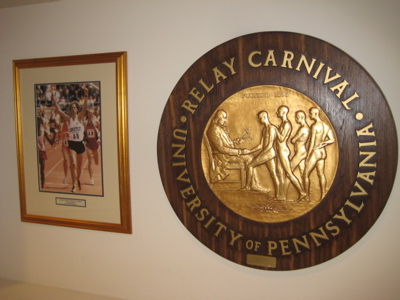 Anyone else fascinated by the, um, “interesting” Penn Relays insignia?

The museum is far, far more than just a monument to the school’s basketball successes. They try their best to show the excellence of ALL 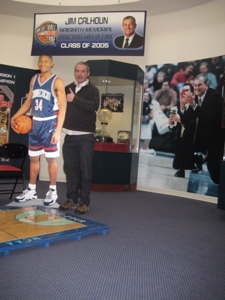 the sports programs, though let’s be honest; there are many reaches here. I’m just going to lift (and edit heavily) text from the museum’s website here on out to make this easier on us all.

The visitors’ UConn experience of the 2700 square foot museum begins with the University of Connecticut “National Champions” Gallery. This unique museum addition, located in the entrance foyer of the Husky Heritage Sports Museum, was unveiled in December of 2004 and will serve as a permanent tribute to all University of Connecticut varsity teams that climbed to the mountaintop and earned the right to be called National Champions.

I love how sports cliche’s work there way into the museum site’s text. “Climbed to the mountaintop!” 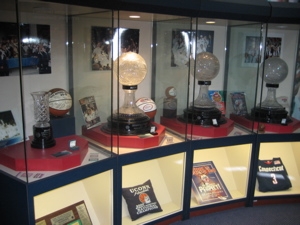 Quick quiz. I’ll give you the five women’s basketball titles (which surely will grow to six and seven in 2010 and 2011) and the two awesome men’s titles. Name one of the other five. Go. Stuck? If you’re from these parts and care a little bit about sports, I hope you at least said “men’s soccer at some point, I think,” in your head.

Oh yeah, I almost forgot. Less than two weeks after visiting this museum I was headed to Panera just down the road from my house. Imagine my glee when I saw none other than Rebecca Lobo entering McDonalds right next door! I went to the car, grabbed the camera and went into McDonalds too. I secretly took this picture and then stood there not wanting anything from the horrorshow that is McDonalds, which left me feeling pretty silly. 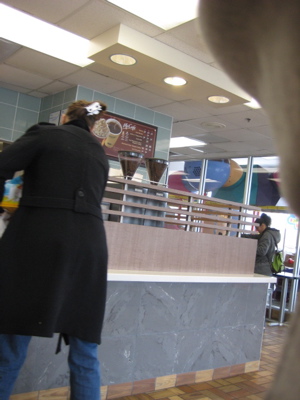 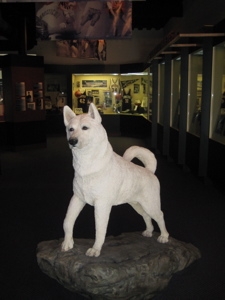 Upon entering the Husky Heritage Sports Museum, visitors are greeted by a full figure statue of Jonathan, the legendary mascot of all Husky athletic teams. I must interject here to note that the Husky became UConn’s mascot in 1934, after the University’s name changed from Connecticut Agricultural College to Connecticut State College, and athletic teams could no longer be called “Aggies.”

The Alumni Association board of directors, one of whom had found a Husky pup at a Connecticut breeder’s, put the question of a mascot to a student vote, and the students voted overwhelmingly to accept the dog as the new mascot. I have read a slightly conflicting account that the mascot came about as a pun; UConn/Yukon from which huskies come. I like that story and I’m sticking to it. 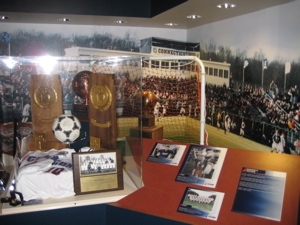 A contest to name the mascot led to the tag Jonathan, after Connecticut’s Revolutionary War-era governor, Jonathan Trumbull.

A tour of the various sections of the Husky Heritage Sports Museum is a walk down memory lane for long-time followers of Connecticut athletics. For fans just becoming acquainted with UConn’s tradition of excellence, the various themes and areas of the museum, when woven together, narrate a complete and compelling sport-by-sport story line. The growth and development of Connecticut athletics is traced via text, photographs and select artifacts from its humble beginnings in the 1890s to its present day ranking among the elite major college athletic programs in the nation. 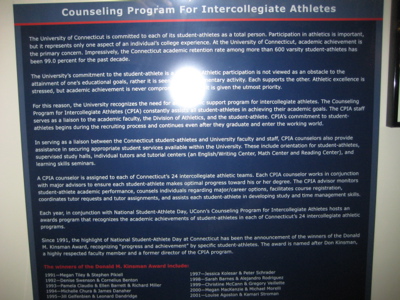 Ah, the joke of the “student athlete.”

Included among the “must see” memorabilia in the Husky Heritage Sports Museum main concourse are the various NCAA National Championship trophies; the 1950s era baseball gloves belonging to Connecticut’s three Dropo brothers-including Walt Dropo’s first baseman’s mitt when he was the American League Rookie of the Year with the Boston Red Sox in 1950; the 1935 Ramnapping Trophy, awarding annually to the winner of the Connecticut-Rhode Island football game; a 1931 football signed by the entire Connecticut squad; team photos of Connecticut’s first men’s (1901) and women’s (1902) basketball squads; and the giant shoes of basketball players Shea Ralph and Jake Voskuhl. Note: I added that last bit because it’s funny. 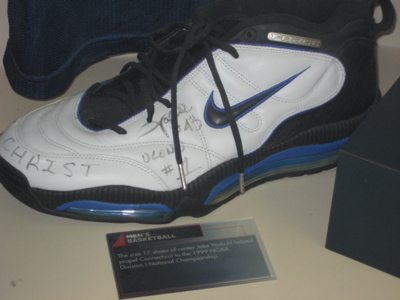 The pinnacle achievement of UConn’s seven NCAA National Championships in both men’s and women’s basketball is preserved and promoted in a unique circular sanctuary—the Connecticut Basketball Rotunda. Visitors must remove their caps and shoes in reverence of the hallowed basketball programs. A blind eye must be turned to the various misdeeds of the men’s program and the felons who have put a ball through a hoop with aplomb over the years. (It seems the women’s team is slowly catching on to tradition, as alumnus all-American Diana Taurasi was just nabbed for DUI in Arizona.) 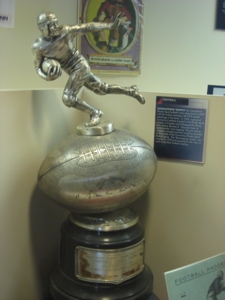 The Ol’ 1935 Ramnapping Trophy – apologies to Heisman – so named for kidnapping the Rhodies mascot, the ram

Championship trophies and related artifacts that chronicle UConn’s men’s and women’s national titles are prominently featured in the rotunda, as are life-size cutouts of Husky All-American stars Ray Allen and Rebecca Lobo. Celebratory paintings of head coaches Jim Calhoun and Geno Auriemma are on display along with a one-of-a-kind watercolor team photo of the 25-member UConn Men’s Basketball All-Century team. 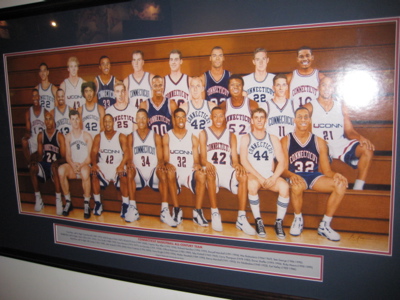 Pretty cool: All the best UConn ballers on one team

Also within the Husky Heritage Sports Museum experience is a six-screen video wall offering behind-the-scenes looks at various UConn Athletics “winning moments” as captured on a variety of Husky highlight films and documentaries. 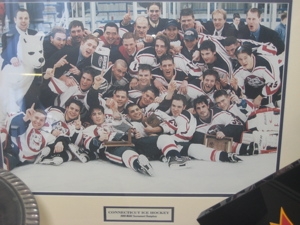 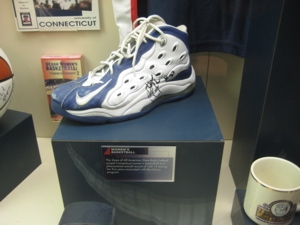 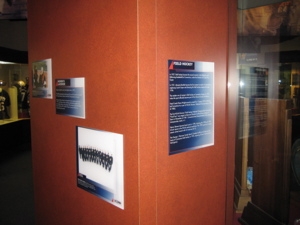 Yay! Sports no one cares about! 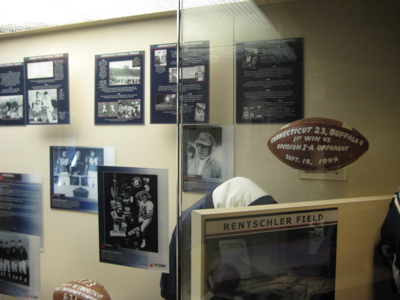 Each display case of memorabilia and every historical photograph located within the walls of the J. Robert Donnelly Husky Heritage Sports Museum describe a portion of a truly remarkable story. 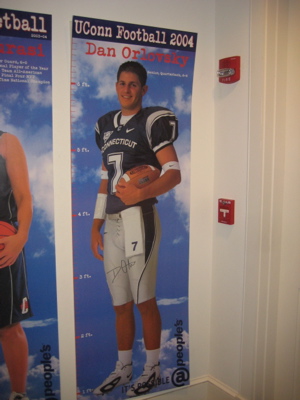 Another remarkable story: UConn’s Dan Orlovsky has a pro career – Unfortunately defined by this boneheaded play

That story of the teams, the coaches, and student-athletes who have been part of the rich history that constitutes the University of Connecticut athletic experience is now being told on a daily basis at UConn’s Husky Heritage Sports Museum. 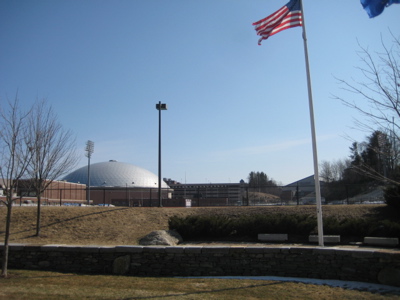 Gampel Pavilion from the museum’s front door. We called it “The Boob” for obvious college-boy reasons, but it never caught on. 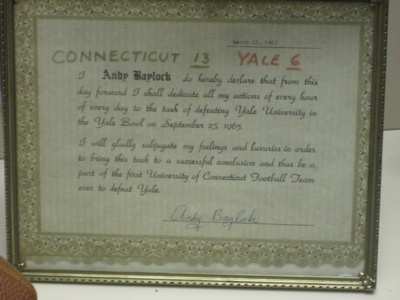 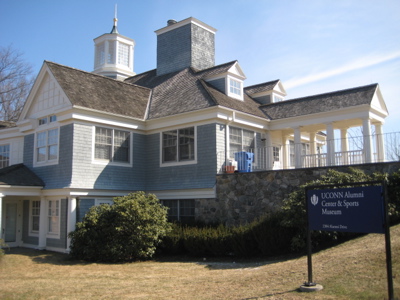