Since I put this page together and after the museum closed, the company was revived and continues to live on: The Hitchcock Chair Company

I’m not into classic Americana furniture in the least, nor will I ever be. I’ll take a Le Corbusier Chair or Barcelona Chair any day over a throwback to Colonial America. But I’m not in the majority. Apparently, The Hitchcock Chair Company positively boomed back in its heyday and most people still know what a “Hitchcock Chair” is. I don’t, and I guess I never will since the company folded recently – as well as the museum across the street. 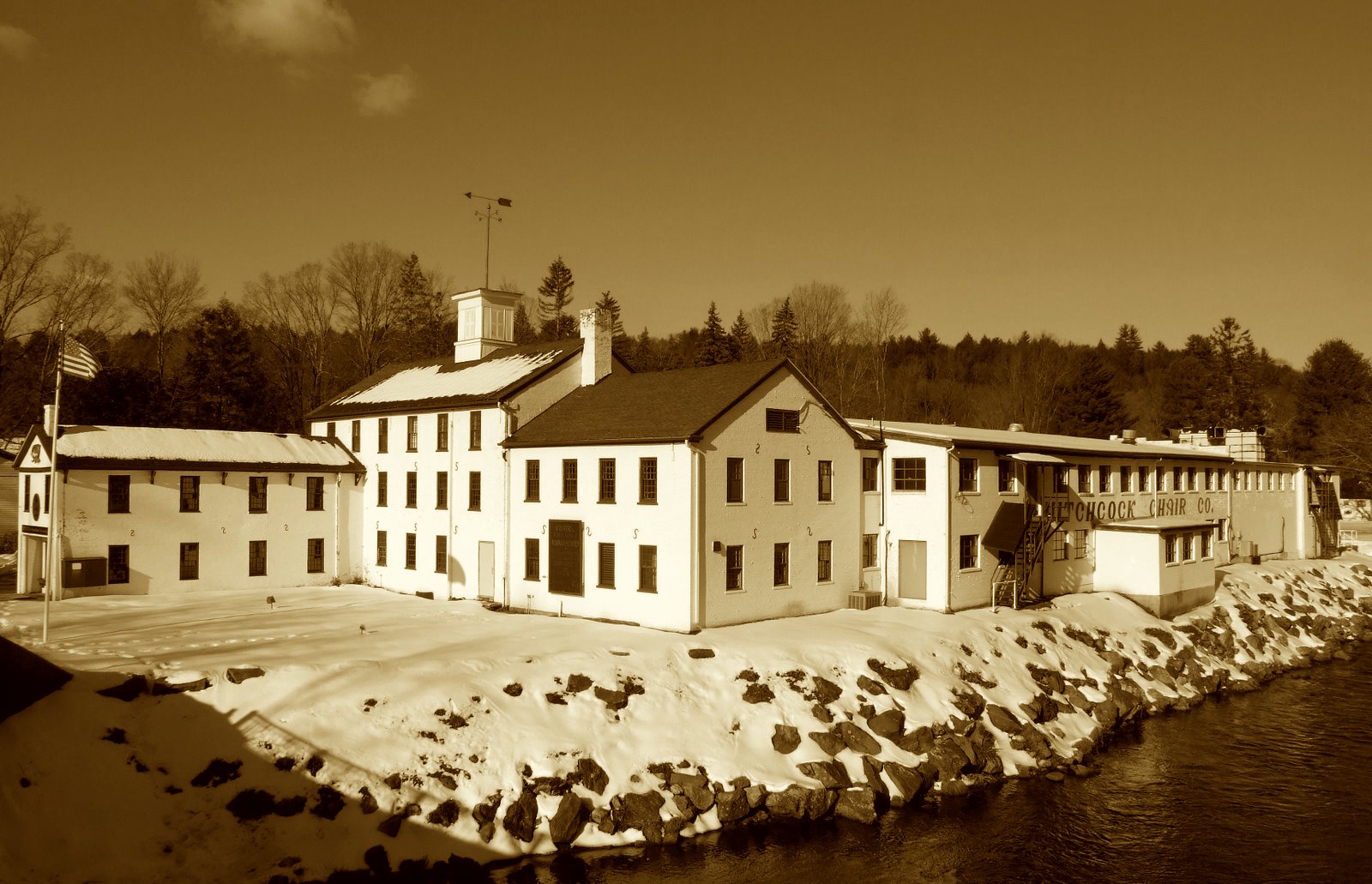 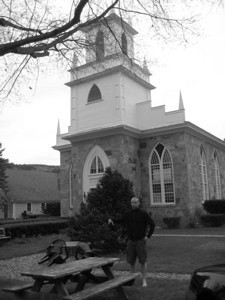 There are a TON of articles about the company, its history, its closure, and its museum-cum-glass blowing artist’s studio. Despite my ignorance about Hitchcock chairs, some of this stuff is really pretty interesting. And regardless, the drive to the Riverton section of Barkhamsted is one of the best in Connecticut, no matter which direction you approach. 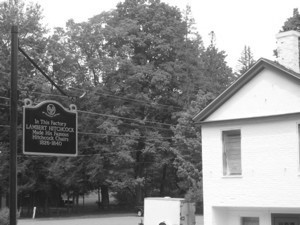 This is a very good history of the company, from American Heritage.

The few people whose names are today synonymous with furniture styles mostly worked for the rich, but one of them, Lambert Hitchcock, achieved fame by being the first to mass-produce furniture. By the late 1820s, when his factory was turning out 15,000 affordable, black-lacquered, brightly stenciled chairs a year, Hitchcocks could be found in countless homes. They still can, for the company has had two lives. But now its second incarnation has been put up for sale, and chairs with the famous name are again an endangered species.

In 1818, after a cabinetmaking apprenticeship, Lambert Hitchcock began producing chair parts at a sawmill on the Farmington River, in northwest Connecticut. Probably inspired by Eli Terry, who some 20 miles south had already begun using interchangeable wooden components to make inexpensive clocks, he soon began assembling completed chairs. Within a few years his village had been renamed for him, and the style and durability of his creations, which were marked L.Hitchcock.Hitchcocks-ville.Conn.Warranted., had made him America’s leading chair manufacturer. He went on to become a state senator before his death in 1852 at the age of 57. His factory shut down in 1864, and Hitchcocksville soon was renamed Riverton.

In 1946 a dissatisfied West Hartford shoe-store owner named John Kenney came to Riverton on a fishing trip. He happened to wade into a pool adjoining the derelict Hitchcock factory, which hadn’t produced a chair in more than 80 years. Seemingly possessed by Lambert Hitchcock’s spirit, he immediately began scouring antiques shops in search of items that would reveal more about the man and his career.

“By and large,” Kenney wrote, “the dealers understood my quest.” “Hitchcocks,” they stated emphatically and without exception, “sell as fast as we find ’em. Everybody wants those chairs, especially the ones with the name still on the backs… In time the inspired Kenney managed to buy the old factory and in it proceeded to build a highly successful operation providing brand-new nineteenth-century chairs to twentiethcentury customers. He also continued his zealous search for historic Hitchcock memorabilia. That, too, was a success, and in 1972 he converted the Union Episcopal Church, a stone’s throw from the factory, to a company museum.

Besides thoroughly documenting Hitchcock’s life and career, Kenney’s 1971 book, The Hitchcock Chair, chronicles his own experiences in the furniture trade. One particularly hair-raising episode occurred during a devastating 1955 deluge. Kenney and a handful of employees who refused to leave spent the night on the factory’s second floor after an August hurricane and a burst dam caused the Farmington River to flood. The next day, with water swirling just a few feet below them, they were rescued. Kenney, like a ship’s captain, stayed put until all hands were on solid ground. Before climbing out a window, he stuffed his pockets with documents from the company safe, including an insurance policy that proved worthless because it didn’t cover floods, then slid down a sagging rope into the rushing current. He was immediately propelled downstream, but a second rope secured around his waist saved his life.

Kenney was certain “gigantic rents would split the factory walls asunder,” and he watched from the opposite bank as the river crested. But to his joy, the building “remained upright and intact” [after] the giant foundation stones laid by Lambert Hitchcock a hundred and thirty years previously played their most important part in all that time.

The Hitchcock Chair Company experienced difficulties after Kenney’s death in 1983. The closing of its museum a few years ago, and the dispersal of its contents to several institutions, including the Connecticut Historical Society, was a clear distress signal, and the announcement that the brand name and the wholesale operation providing Hitchcock products to dealers nationwide were for sale, partly because of overseas competition, was quickly followed by news that the company’s four retail stores would be shuttered. Its flagship outlet in the old Riverton factory, now empty, had been a mecca for loyal Hitchcock customers, and Carol Sterpka, the manager and a longtime company employee, told me that some traveled long distances year after year to visit. A few who came for this year’s final clearance, she said, shed tears.