Let me first try to explain the slightly confusing aspect of the Windsor Historical Society. As they are responsible for telling the long history of Connecticut’s oldest town (or second oldest to Wethersfield, who knows), they have to do it through multiple properties. This page is about their headquarters. The main building. The event space. The free one. 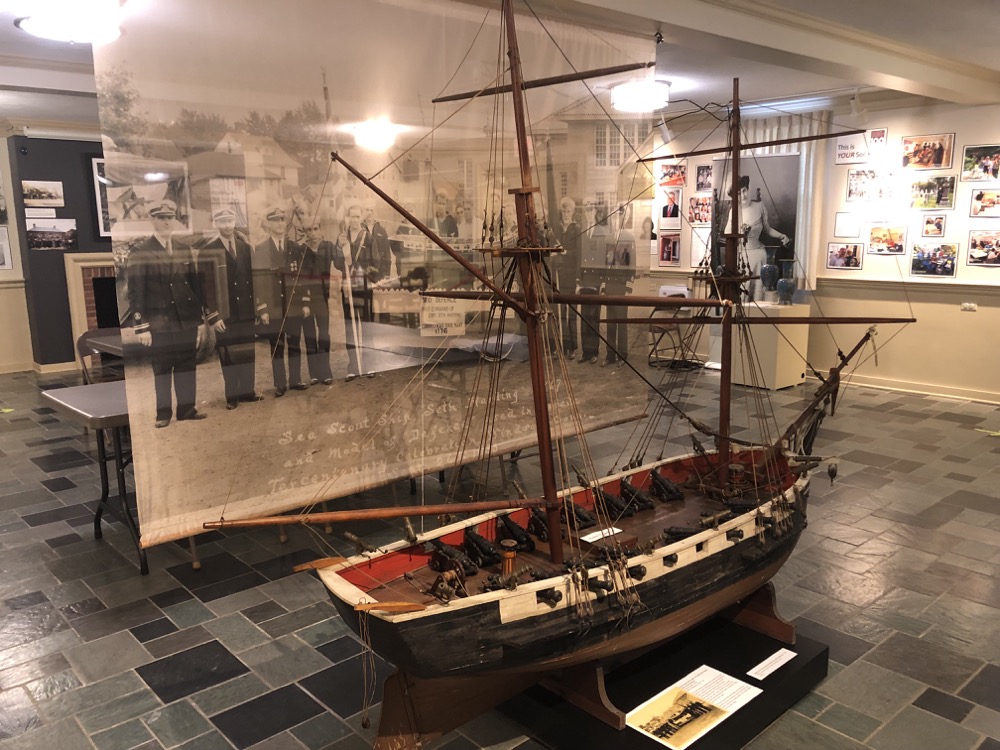 The Strong-Howard and Chaffee Houses are both right next to this place, but those historic houses have their own, separate stories to tell. While you’re in town touring historic houses, you might as well hit up The Oliver Ellsworth Homestead as well, but that’s owned and operated by DAR, not the historical society. I’m sure they all get along beautifully.

Not only does the town itself has a load of history, the historical society has a load of it as well. I happened to visit in 2021, the organization’s 100th anniversary. I was greeted and immediately urged to check out the brand new exhibit about… itself. The exhibit recounts the Society’s history, celebrating the many people and stories that led to it becoming one of the “premier local history organizations in Connecticut”. 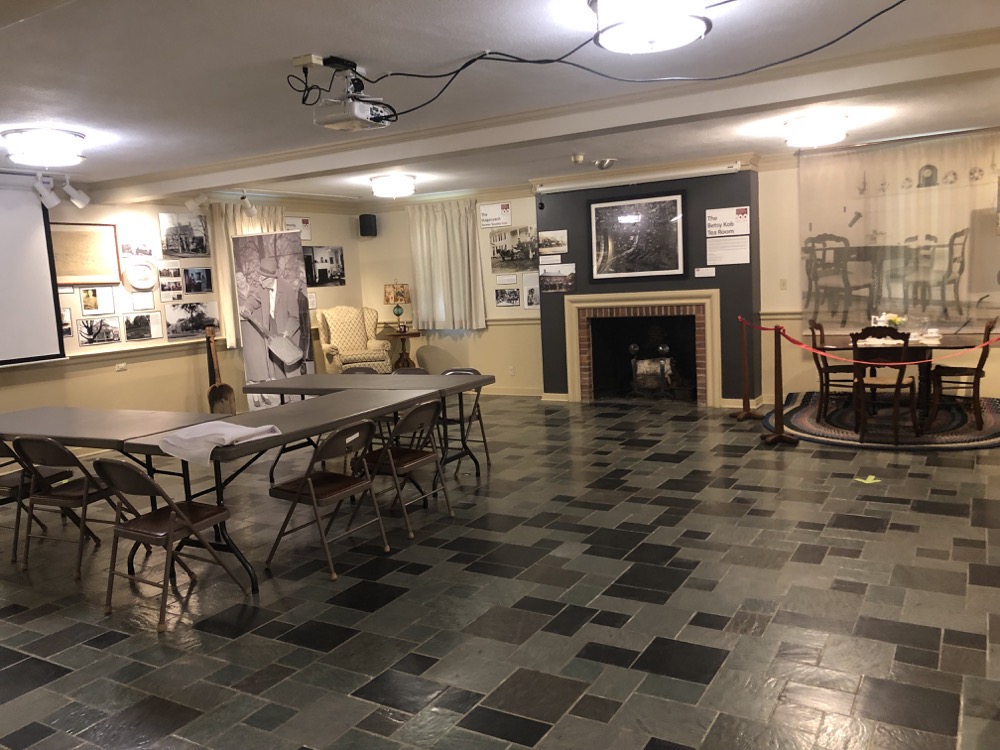 No one can fault the Society for celebrating a century of existence. The folks that started the effort back then had vision and an understanding that preservation was as important then as it is now. The exhibit walked me through past presidents, members, and important acquisitions and decisions along the way.

The Society’s original bylaws included plans for the town’s tercentennial celebration in 1933. Yeah, that’s right people reading this from non-old US states. Windsor turned 300 in 1933. (Non-Americans, keep your mouths shut, thanks.) This was a huge to-do in town; a 4-day celebration with parades and church services and speeches. That’s… um… let’s hope for something just as exciting in 2033. 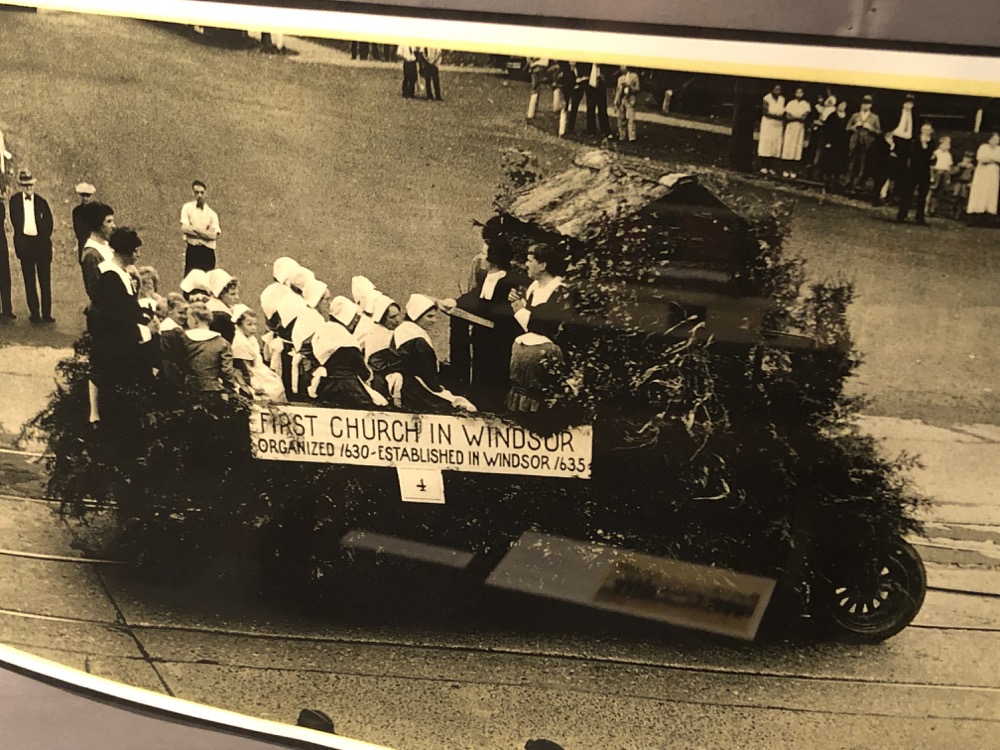 It’s kind of crazy to me that the Society has held some of its historic houses for a hundred years as well. The exhibit showed me what the Strong-Howard House was like back then, and it kind of looks the same as it looks now. Which, I think, is sort of the point of a historic house museum, as long as the subject predates the old pictures of it. Right?

Actually, the Society operated the Betsy Kob Tea Room out of that historic house slash research center slash museum back in the 1930’s as a way to make money. I have no idea if that was a unique idea or not, but it seems like it probably was. 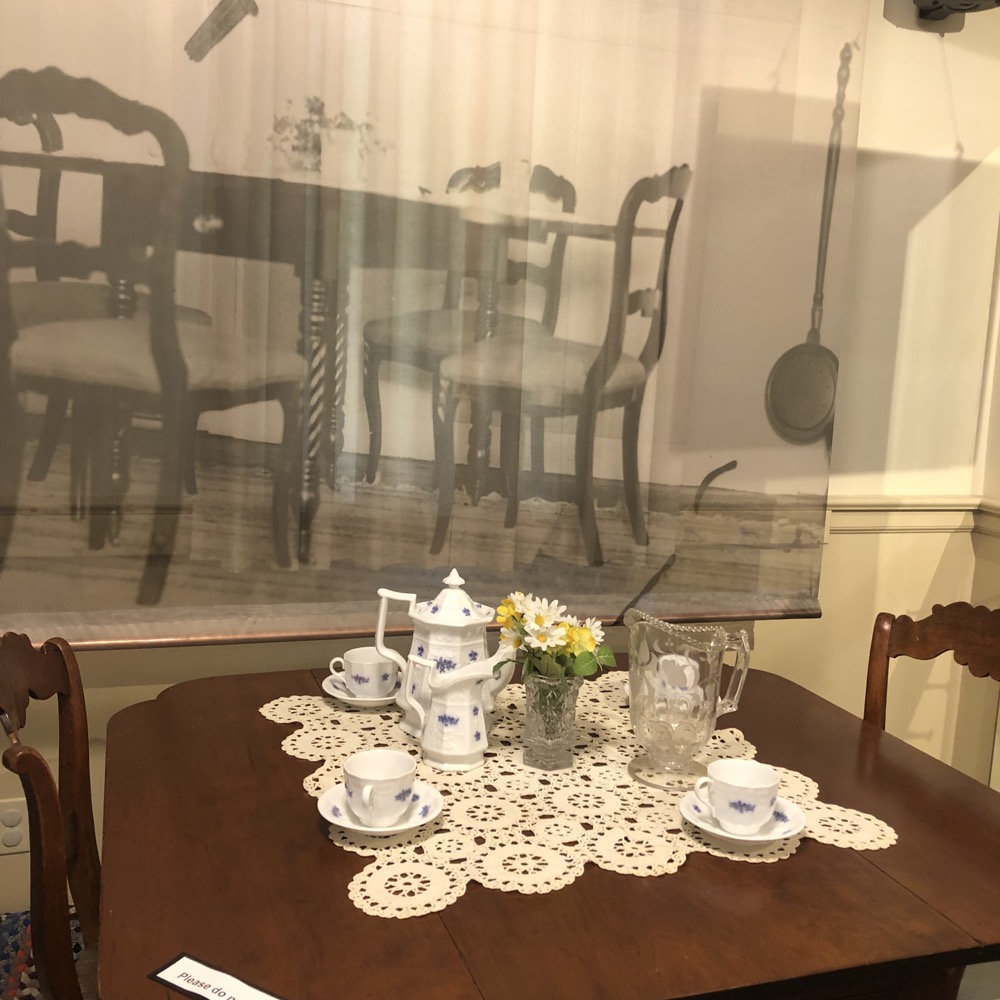 Here’s a weird thing. A founding member was Princess Julia Grant Cantacuzene Speransky. She was the granddaughter of Ulysses S. Grant. She married a Russian prince, who was the grandson of Czar Nicholas I. I guess that’s not that weird. She was wealthy and traveled a lot and donated some random stuff to the collection that had nothing to do with Windsor. I think the Society just likes the royal and presidential connection of a founding member. Makes them more “premier” I suppose.

Let’s see… oh, it’s a piece of Plymouth Rock! Its provenance is assured by a sign saying, essentially, “the dude who gave us this assures us it’s legit.” And since Windsor was founded so early, it goes without saying that those founders came from the Plymouth in Massachusetts, so this is a cool artifact. 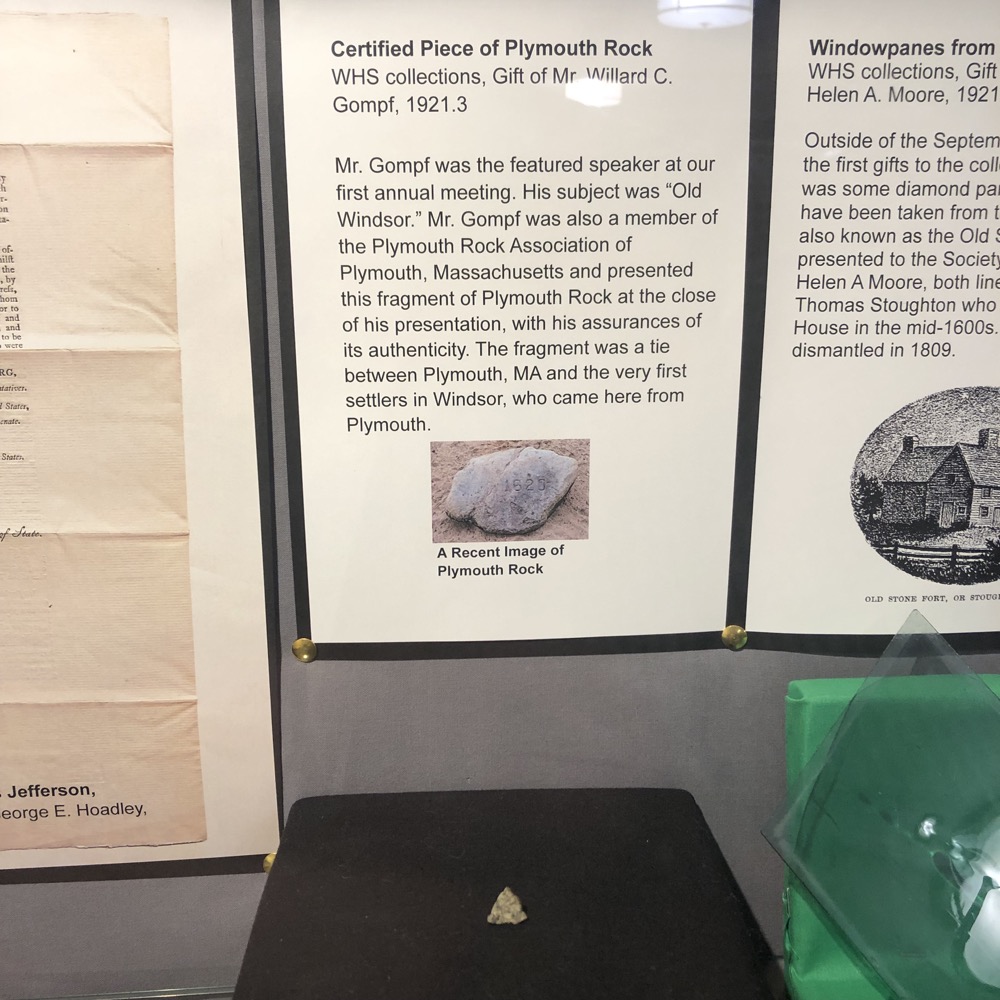 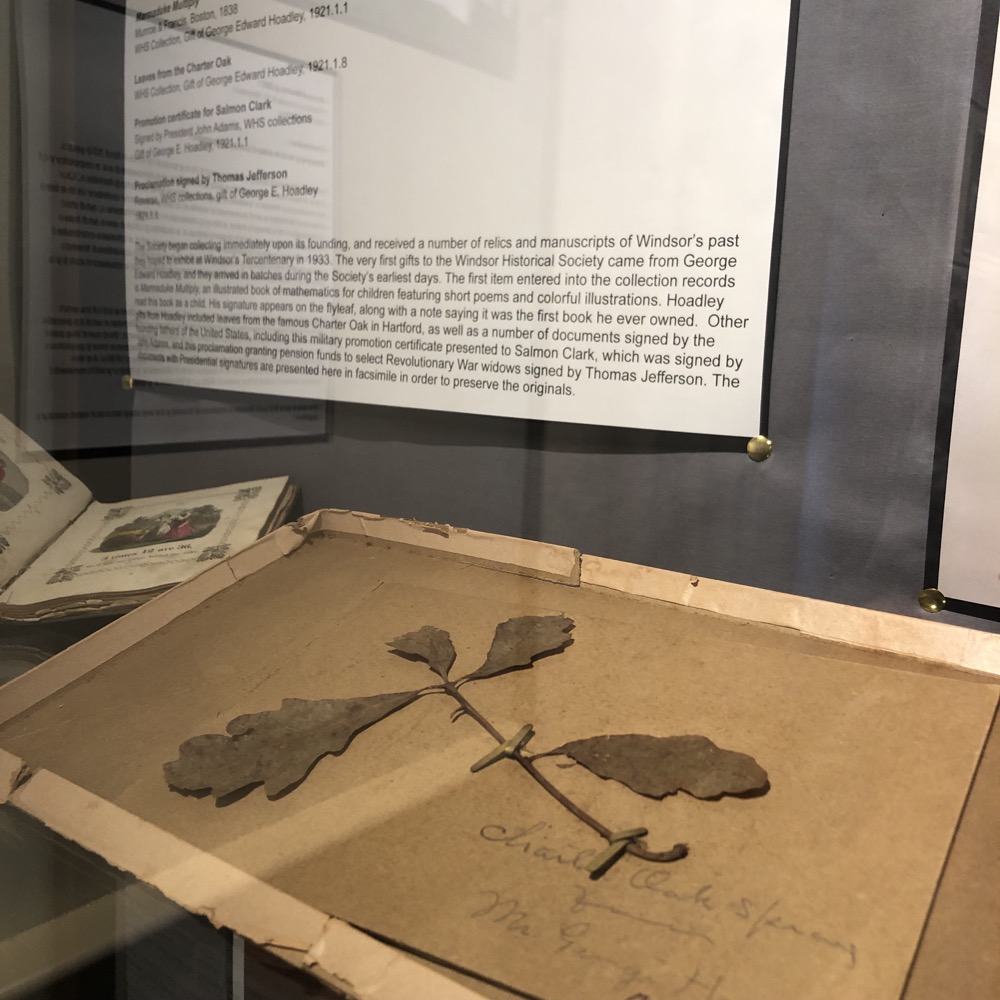 There are signed documents from Thomas Jefferson and George Washington. There are some pressed leaves from the Charter Oak. An original sign from Bissell’s Ferry, said to be the “oldest ferry in the United States.”

The “100th Anniversary” exhibit was a nice gift to themselves in a way – much deserved and interesting enough for someone like me who has no connection to Windsor nor its historical society. There are two other rooms here, both permanent exhibits about the town’s history. Windsor matter-of-factly claims to be Connecticut’s oldest settlement, and I like the way they go about that. 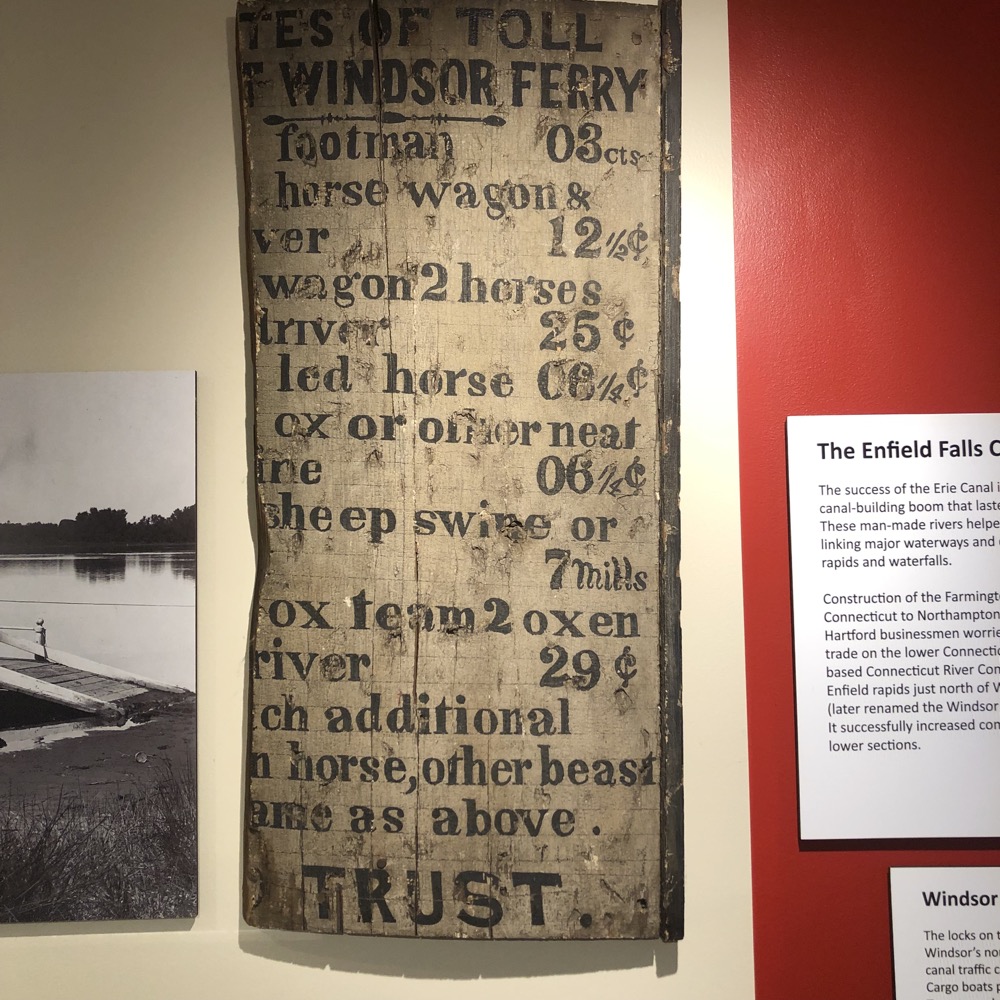 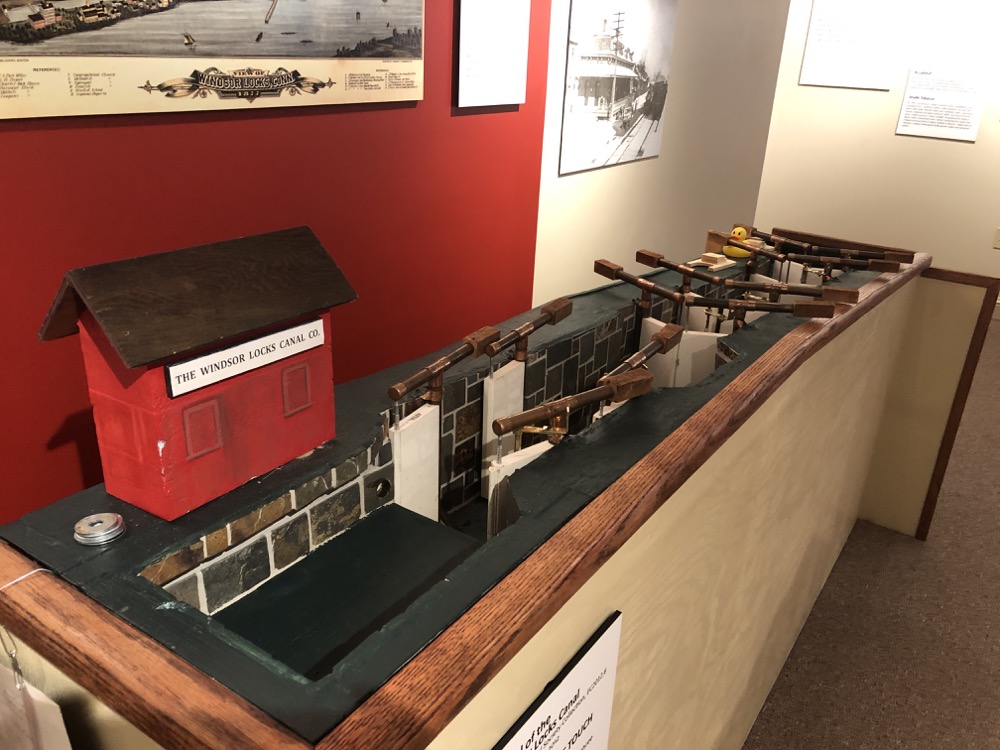 The competition down the river seems to make a bigger deal out of it, which is just a bad look. I’m on the Windsor Train.

The museum does a good job making it clear that Native Americans lived here well before white people. They do claim that the local natives sought out the new English settlers in Plymouth to come down and start living in Windsor in an effort to help protect them against the aggressive Pequots and Mohawks there were always fighting around them. Sounds apocryphal to me, but what do I know?

There was little interest from the English in Massachusetts until 1633, when word reached them that the Dutch had established a trading post in what is now Hartford. Now, the pressure was on to establish an English outpost on the Connecticut River, a major transportation artery with headwaters far to the north, providing access to promising fur trade. A party of Plymouth settlers under the leadership of William Holmes sailed upriver past the Dutch fort in Hartford, arriving on September 26, 1633 to establish a trading post just south of where the Farmington River joins the Connecticut. Within the next two years, two other groups of settlers would arrive, the first from Dorchester, Massachusetts and the second, a group that had just migrated from England under the auspices of Lord Saltonstall. 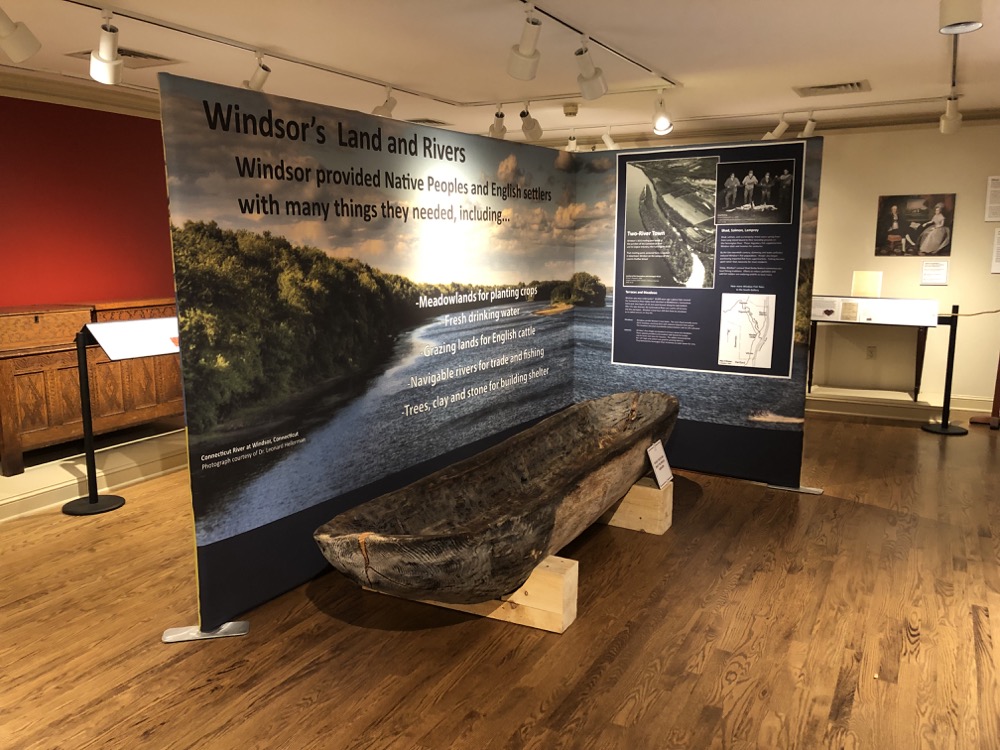 By 1635, English groups had established plantations or towns at Dorchester (renamed Windsor), Newtowne (renamed Hartford) and Watertowne (renamed Wethersfield). In April of 1636, representatives from the three towns held a court in Hartford, an alliance that would evolve into the Colony of Connecticut. One year later, that same court authorized an “offensive war” against the Pequot under the command of Captain John Mason of Windsor. In Windsor, a palisade was hastily erected for protection. Settlers within the palisaded area temporarily gave up their home lots to accommodate families moving in from outside the Palisado. The quick and brutal engagement between the River Town and Pequot forces under the command of Captain Mason resulted in decimation of the Pequot peoples. Windsor’s palisade was gone by 1640 although reference to it remains to this day in Windsor’s Palisado Green. 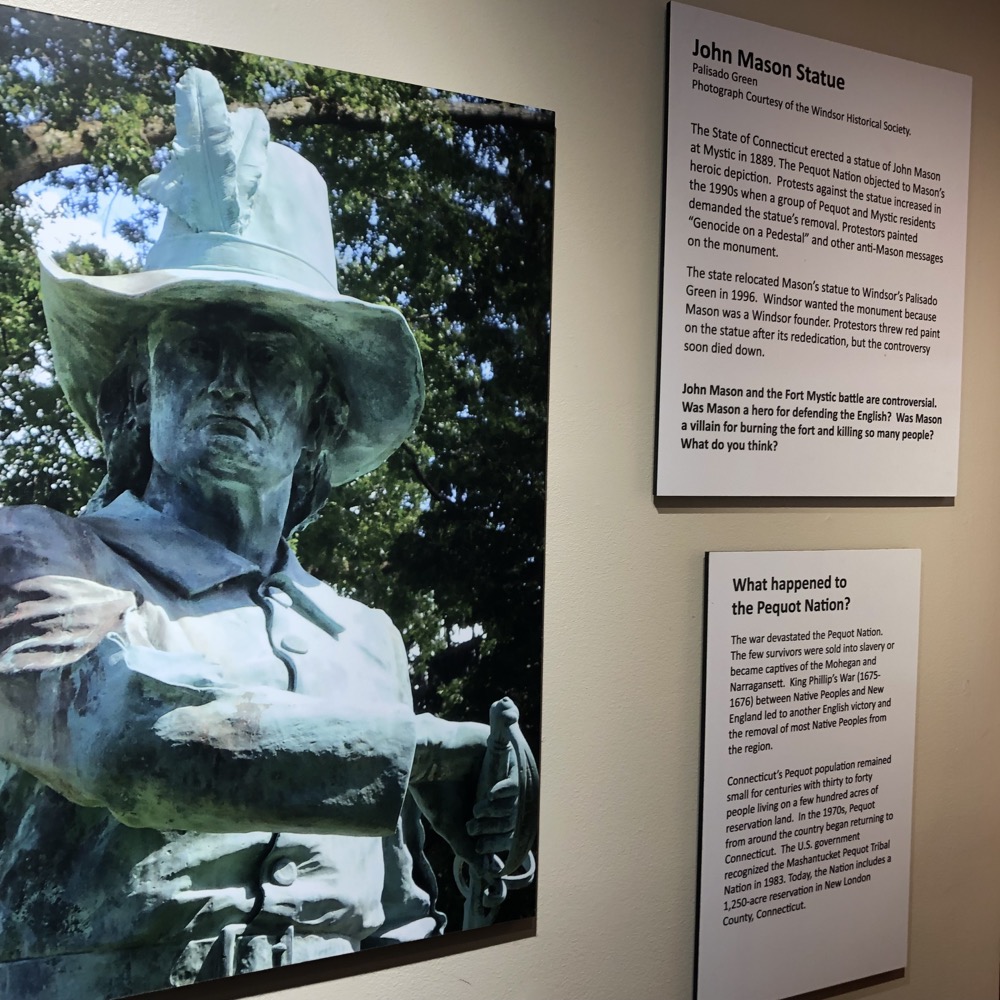 Ah. Captain John Mason. He’ll have his statue torn down eventually, as Windsor’s most infamous son. The current day Pequots successfully had it removed from Norwich and now he’s back in Windsor. Sure, he incinerated a bunch of Pequot women and children, but war is hell I guess. The story of his statue is here, with lots of interesting reader comments.

You know I love my cartographic history. Windsor used to be huge. How huge? This huge: 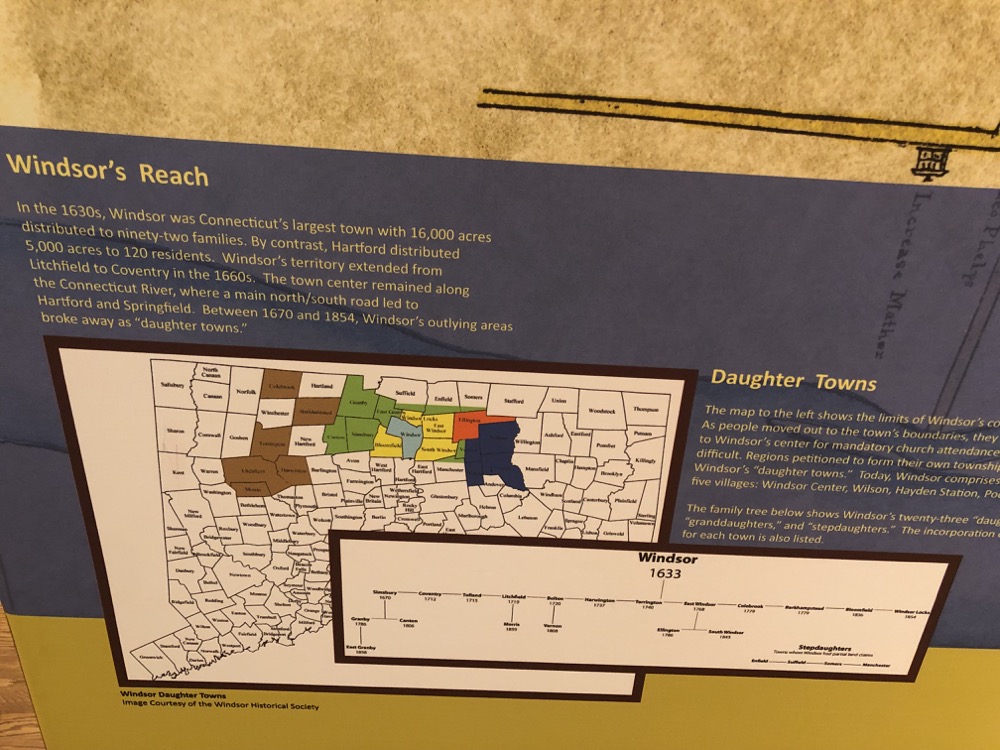 Here’s your reminder that Harwinton, way out west, is so-named because it was borne of Hartford, Windsor, and Farmington.

Over the centuries, Windsor spawned all those “daughter towns” and consolidated itself to what it is today. Still a “river town,” whose commerce has changed drastically in three centuries. From fur trading and fishing to other river industries to farming (especially tobacco) to what it is today: a suburban town with TWO giant Amazon distribution centers as well as other faceless businesses along Day Hill Road. 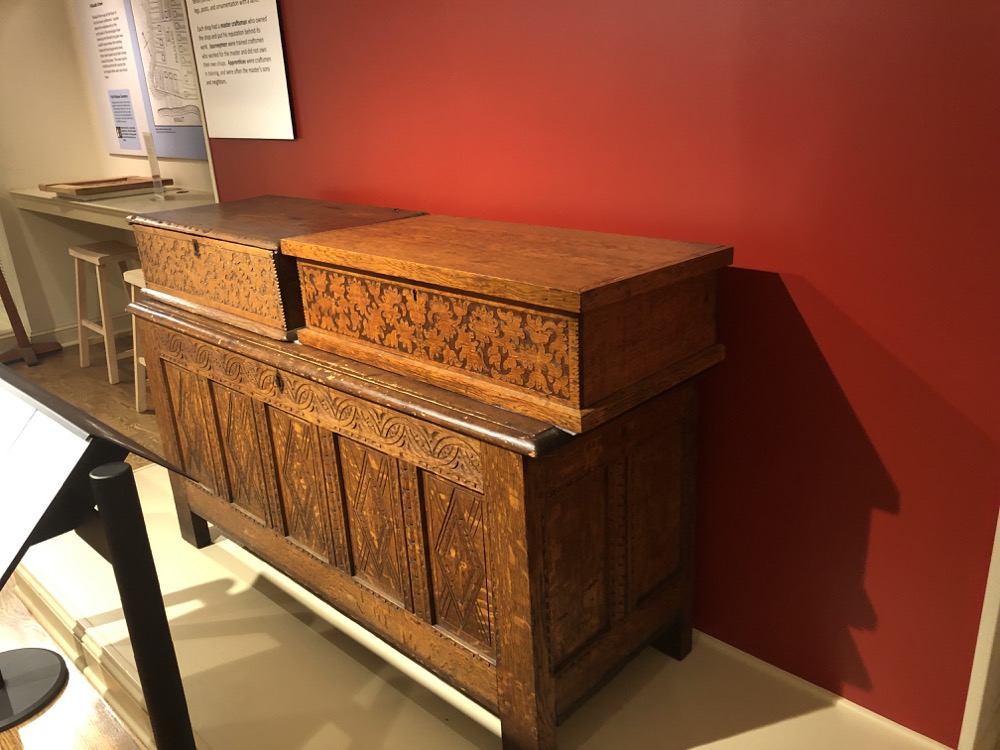 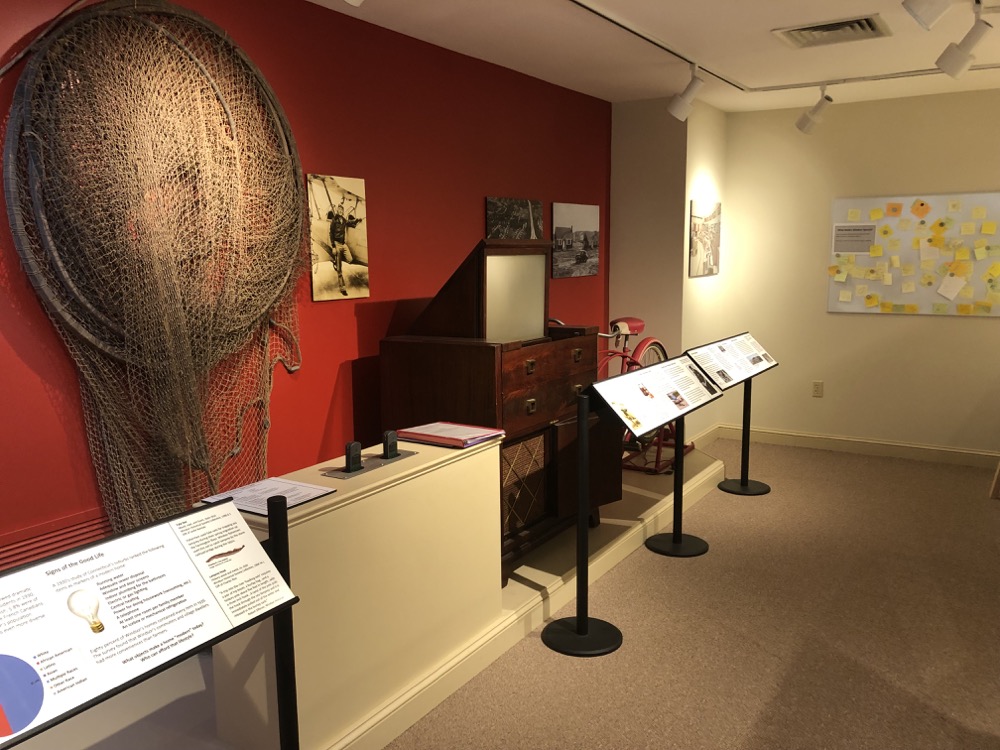 One business no longer on Day Hill Road was Combustion Engineering. I can’t be the only person who finds the fact that this company did nuclear research and actually built a nuclear reactor here in the 1960’s fascinating. Yes, there was a nuclear reactor in Windsor. Not many Connecticut towns can say that. 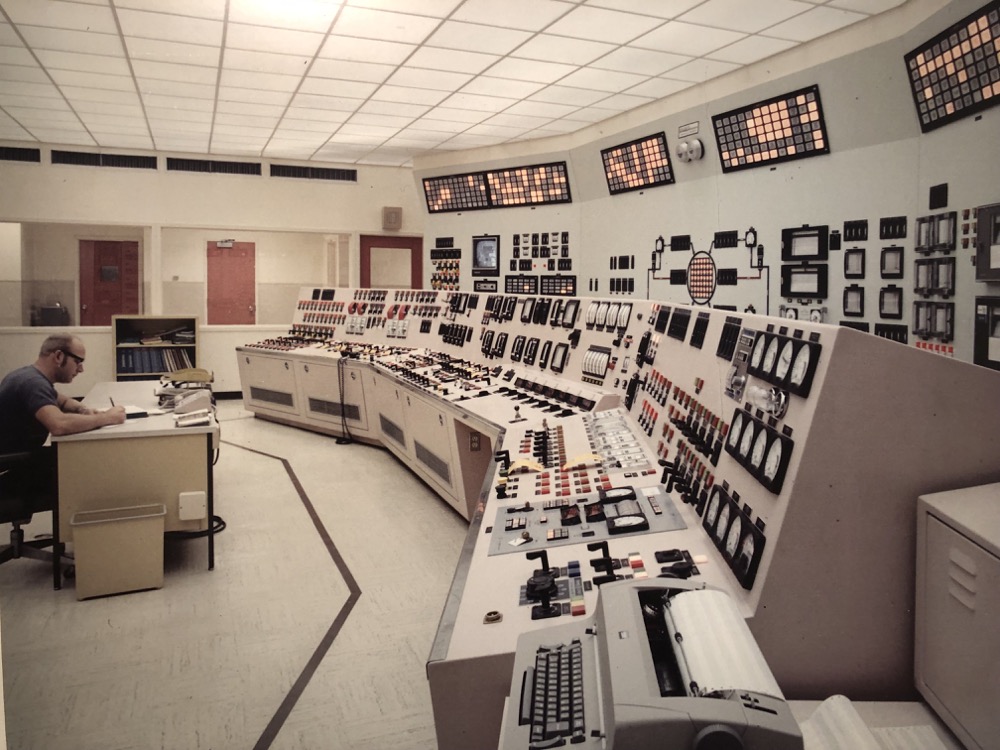 Just some guy monitoring nuclear stuff in Windsor in 1960. 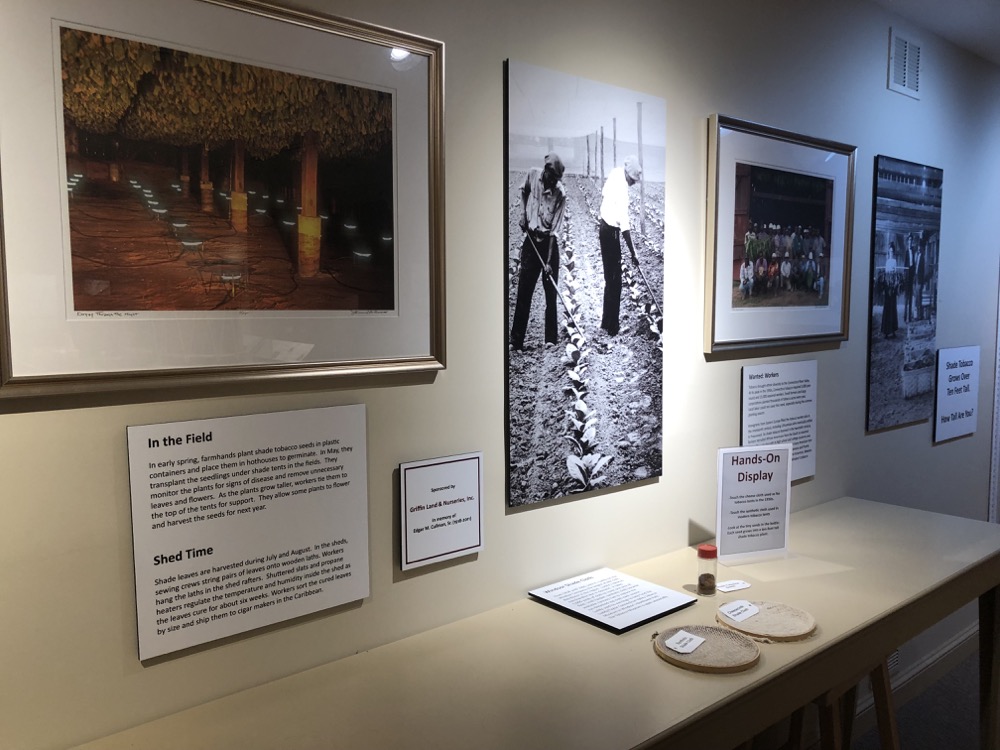 And not many Connecticut towns can say this either:

In the past fifty years, Windsor’s population has continued to diversify. Increasing numbers of people moving from Hartford to the suburbs were members of minority groups. Windsor’s African-American population increased more than tenfold between 1970 and 2000, reaching about 27% of the town’s population. That year, median income for Windsor’s black households was larger than for its white households. 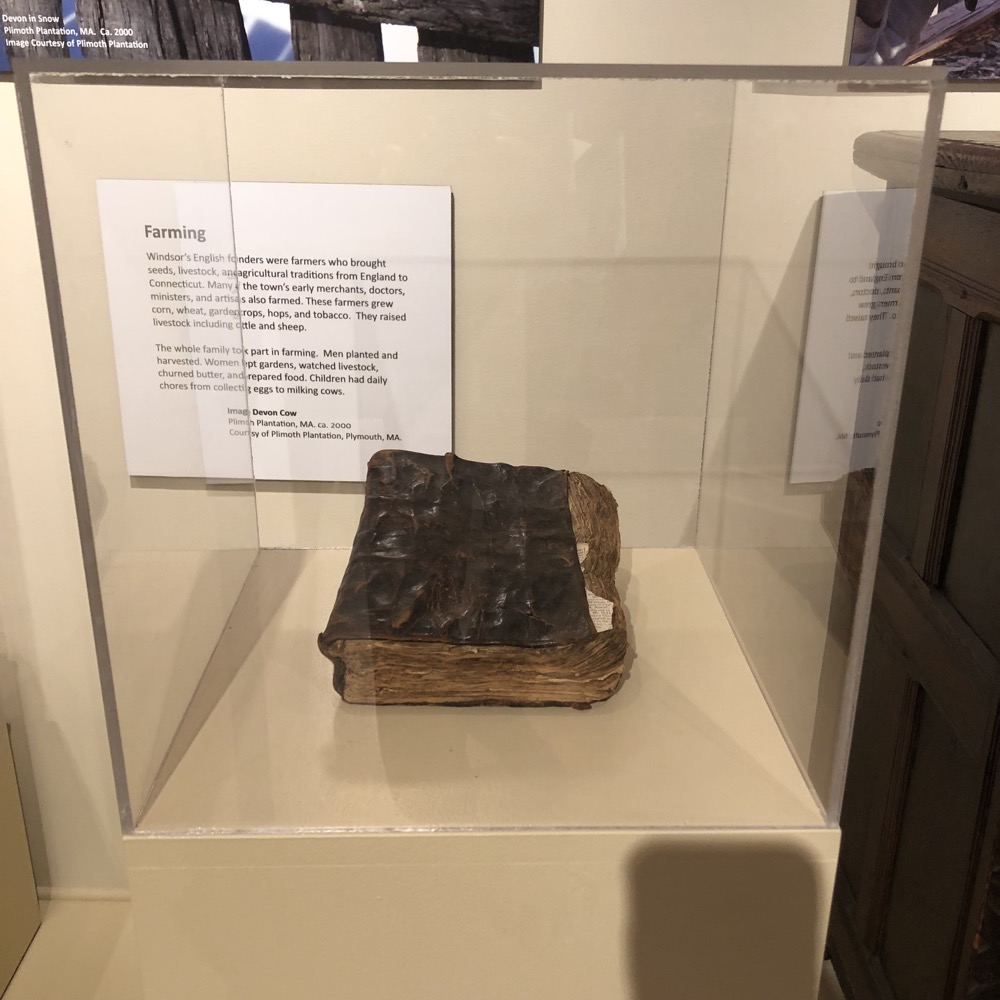 Geneva Bible from 1599(!) from a Dorchester, MA puritan family

My older son goes to a specialized school in Windsor. I worked in Windsor in the 1990’s when Aetna moved me from downtown Hartford to one of the “faceless buildings” here, then again for another company for a while (another “faceless building on Day Hill Road”) and then back again after my LEGO years in Enfield. I patronize the town’s library during my lunches sometimes and I buy food from its restaurants (lacking as that scene may be). There’s a lot more to the town than many people realize, but heck, after nearly 400 years of existence, there had better be. 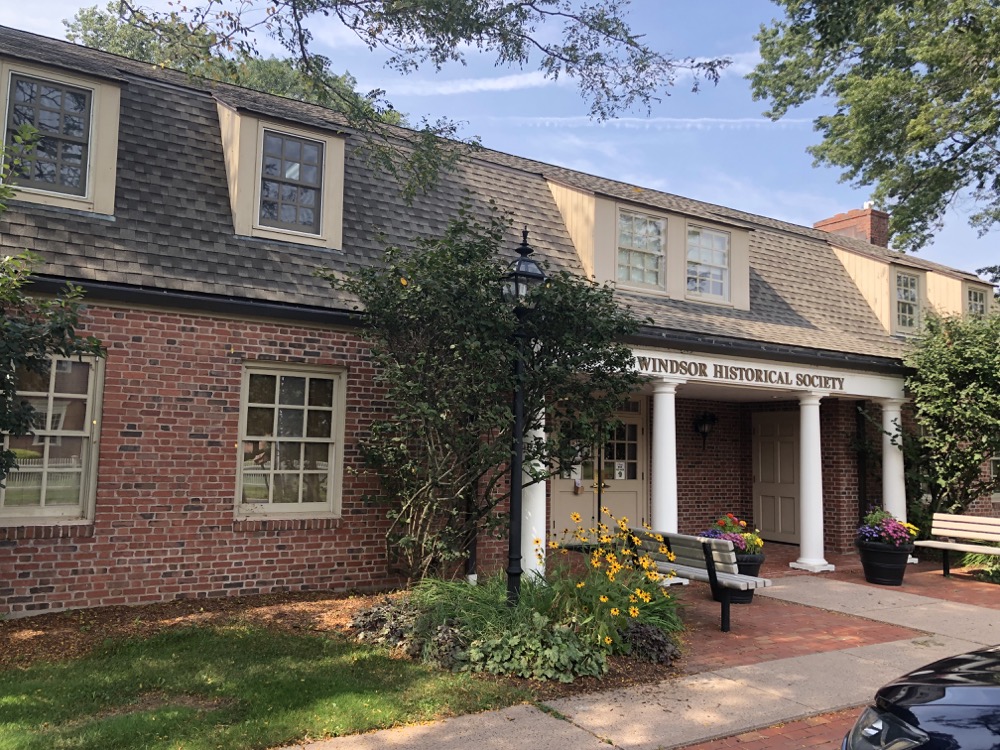