I’ve gone crazy lately with multiple posts from Windsor. It stands to reason, of course, as Windsor does stake its claim as Connecticut’s Oldest Town. There are a bunch of museums in Windsor – most conveniently located on the green surrounding this statue – and other fascinating things such as the site of the oldest ferry in the US (right up the road),the oldest legible gravestone in the US and the oldest parish in the new world (both right across the street from the Mason statue). 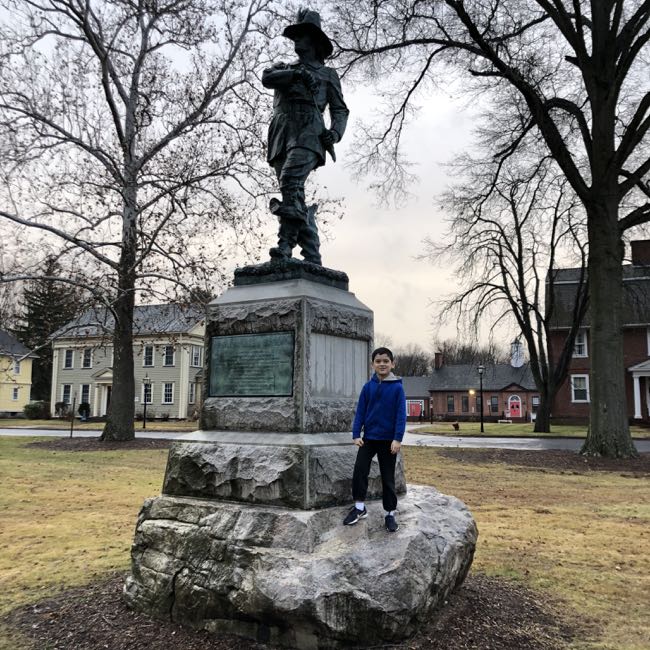 But, for me, I think this statue of a guy whom you may have never heard of in the middle of Palisado Green is my favorite CTMQ Curiosity of the bunch. His story is interesting on many levels; crisscrossing the state from Windsor to Norwich and back to Windsor again, stirring up anger and passion centuries after his life, he’s been vandalized and pilloried – all this for a guy who, again, you may know nothing about. Let’s change that.

How much do you know about the Pequot War? I’ve mentioned it here and there on CTMQ, but figure it will get the full treatment down the road at the Mashantucket Pequot Museum down on the tribal lands. The war was essentially a four year series of guerilla attacks and skirmishes throughout Connecticut and Massachusetts between the (roughly) English Puritan/Narragansett/Mohegan faction versus the Dutch/Pequot alliance. It was brutal and is often noted as a turning point of colonial fortunes.

It was more or less a gang war over trade routes and materials. In the 1630s, the Connecticut River Valley was in turmoil. The Pequot aggressively worked to extend their area of control, at the expense of the Wampanoag to the north, the Narragansett to the east, the Connecticut River Valley Algonquians and Mohegan to the west, and the Algonquian peoples of present-day Long Island to the south. All of these contended with one another for dominance and control of the European trade. 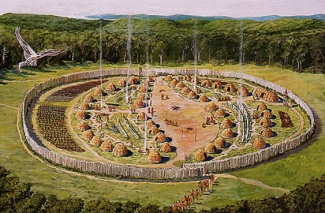 The Dutch and the English were also striving to extend the reach of their trade into the interior in order to achieve dominance in the lush, fertile region. By 1636, the Dutch had fortified their trading post, and the English had built a trading fort at Saybrook. English Puritans from Massachusetts Bay and Plymouth colonies had settled at the newly established river towns of Windsor, Hartford, and Wethersfield.

The stage was set and things were about to get ugly. In 1634, John Stone, a smuggler, privateer, and slaver, and seven of his crewmen were killed by the Western Niantic, tributary clients of the Pequot, in retaliation for atrocities committed by the Dutch, and by Stone. A principal Pequot Sachem, Tatobem, had boarded a Dutch vessel to trade. Instead of conducting trade, the Dutch seized the Sachem and demanded a substantial ransom for his safe return. The Pequot quickly sent a bushel of wampum, and received Tatobem’s corpse in return.

Then on July 20, 1636, a respected trader named John Oldham was attacked on a trading voyage to Block Island. He and several of his crew were killed and his ship looted by Narragansett-allied Indians who sought to discourage English settlers from trading with their Pequot rivals. In the weeks that followed, colonial officials from Massachusetts Bay, Rhode Island, and Connecticut, assumed the Narragansett were the likely culprits. Knowing that the Indians of Block Island were allies of the Eastern Niantic, who in turn were allied with the Narragansett, Puritan officials became equally suspicious of the Narragansett. Even so, the colonial English response to Oldham’s death, the last in a series of escalating incidents, has traditionally been viewed as the beginning of the Pequot War. 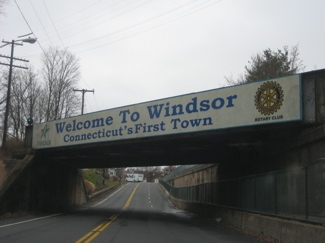 Smaller battles continued, with deaths on both sides. Through the fall and winter, Fort Saybrook was effectively besieged. Any who ventured outside were killed. As spring arrived in 1637, the Pequot stepped up their raids on Connecticut Colony towns. On April 23, Wongunk chief Sequin attacked Wethersfield with Pequot help, killing six men and three women, a number of cattle and horses, and taking captive two young girls (the daughters of Abraham Swain, later ransomed by Dutch traders). In all, the towns lost about 30 settlers.

In May, leaders of Connecticut Colony’s river towns met in Hartford, raised a militia, and placed Captain John Mason, who was not a Puritan, in command. Mason set out with 90 militia and 70 Mohegan warriors under Uncas to repay the Pequot.

And this is where the notorious and infamous John Mason made his mark. Believing that the English had returned to Boston, the Pequot sachem Sassacus took several hundred of his warriors to make another raid on Hartford. But John Mason had only gone to visit the Narragansett, who joined him with several hundred warriors. Several allied Niantic warriors also joined Mason’s group. On May 26, 1637, with a force up to about 400 fighting men, Mason attacked Misistuck by surprise. He estimated that “six or seven Hundred” Pequot were there when his forces assaulted the palisade. Some 150 warriors had accompanied Sassacus, so that Mystic’s inhabitants were largely Pequot women and children. Surrounding the palisade, Mason ordered that the enclosure be set on fire. 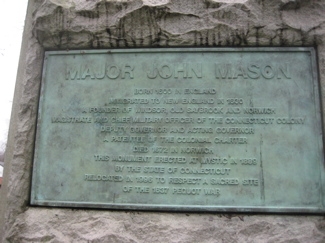 Justifying his conduct later, Mason declared that the holocaust against the Pequot was also the act of a God who “laughed his Enemies and the Enemies of his People to scorn making the Pequot as a fiery Oven . . . Thus did the Lord judge among the Heathen, filling Mystic with dead Bodies.” Mason also insisted that should any Pequot attempt to escape the flames, that they too should be killed. Of the 600 to 700 Pequot at Mystic that day, only seven were taken prisoner while another seven made it into the woods to escape. 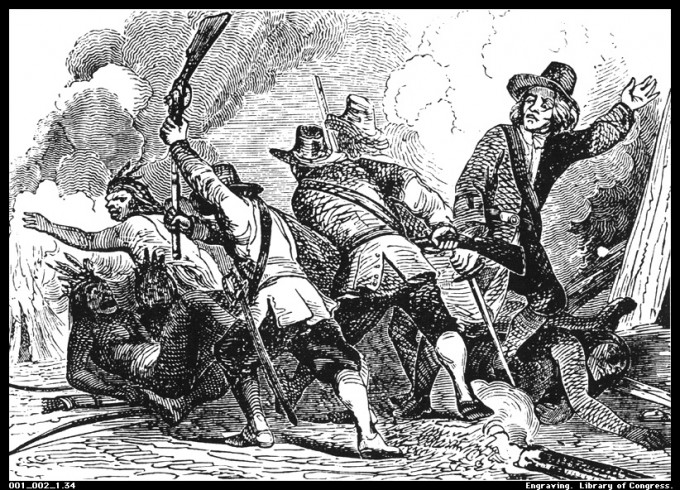 The Narragansett and Mohegan warriors who had fought alongside John Mason and John Underhill’s colonial militia were horrified by the actions and “manner of the Englishmen’s fight… because it is too furious, and slays too many men.” Repulsed by the “total war” tactics of the Puritan English, and the horrors that they had witnessed, the Narragansett returned home.

The slaughter at Mystic broke the Pequot, and deprived them of their allies. I’ll get more into this war on another post, as I’m supposed to be focusing on this John Mason character. I mean, an honorary statue of a mass murderer who disgusted those who fought alongside him? (By the way, Sarah Vowell also discusses this stuff in her awesome The Wordy Shipmates.

So, what’s the story with the statue?

The statue came to Windsor in 1995 after a long and heated debate with the Pequot Tribal Council and the Groton Town Council over its bloody history and its celebration of a man, whom the Pequots argued was responsible for the near genocide of their tribe.

“That statue is still a lightning rod,” said Kevin McBride, the director of research at the Mashantucket Pequot Museum and Research Center. “It continues to be vandalized to this day.” 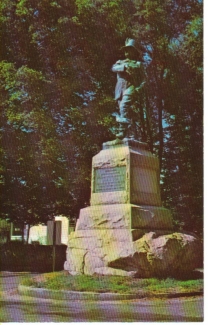 A 9-foot-tall statue of Mason was erected and placed at the site of the massacre in Groton (here he is, above, at his former perch in Groton). In 1991, Lone Wolf Jackson, a Pequot tribal council member, petitioned the Groton Town Council to have the statue removed. The statue was subject to repeated vandalism and red paint was spread over Mason’s hands with the word “murderer” scrawled over the statute.

What ensued was years of wrangling between the tribal members and the Town Council over what to do with the statue, and a peace was finally brokered to move the statue to its current home in Windsor, where Mason lived most of his life and is considered to be one of the town’s founders. He also is considered a hero for defending the town of Wethersfield against a raid by Pequots.

“It was certainly a contested issue,” said Jason Mancini, another researcher from the Pequot Museum. “The tribe was adamant to not have that statue there.” Not only was the tribe upset that
the state had designated the site of the massacre as an appropriate place for the monument, but a plaque that characterized Mason’s actions as “heroic victory” was a slap in the face to local Pequot descendants.

The statue was moved to Windsor in 1995, and the editorializing on the original plaque was discarded and replaced with neutral wording, describing how the statue came to town.

Windsor Historical Society President Christine Ermenc said the statue has become a teaching tool for residents and local students interested in learning more about the Mystic massacre and the history of their town.

While she doesn’t recall specific incidents of vandalism in Windsor, there have been times since she’s been president of the society in which the statue’s hands have been painted red.

2016 Update: I hope you’re still reading this page, because this is good stuff. Were you, like me, wondering what happened to the original plaque? The one with the insensitive verbiage that was replaced upon the move to Windsor?

Well, I found it: 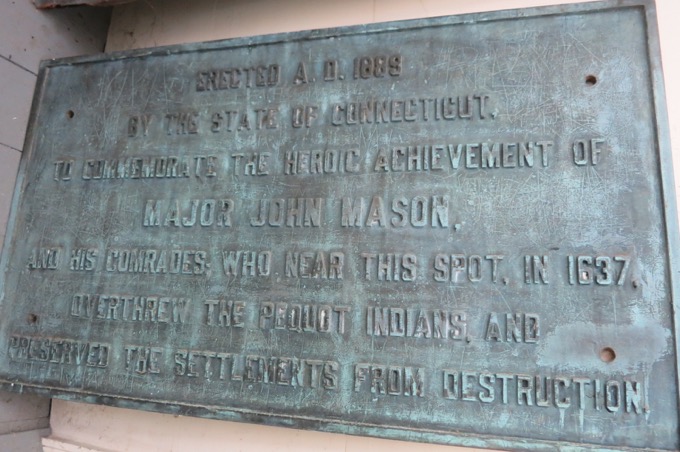 It was located at the Portersville Academy in Groton! I was given free reign to poke around, so poke around I did. I opened up a closet and – HOLY CRAP! The original John Mason Statue plaque!

I excitedly shared this with a couple friends who care about this stuff and we were all equally giddy.

That’s all I’ve got, but it was really cool finding it.

Lastly, there are two sides to every story – no matter how old. You can find plenty of Mason fans/apologists around the Internet and in the comments below.