I know you all just love when I insist on geolocating things in either Groton or Stonington and refuse to say “Mystic.” Even now, with the Mystic River Historical Society of… Mystic. Look, it’s in Groton. 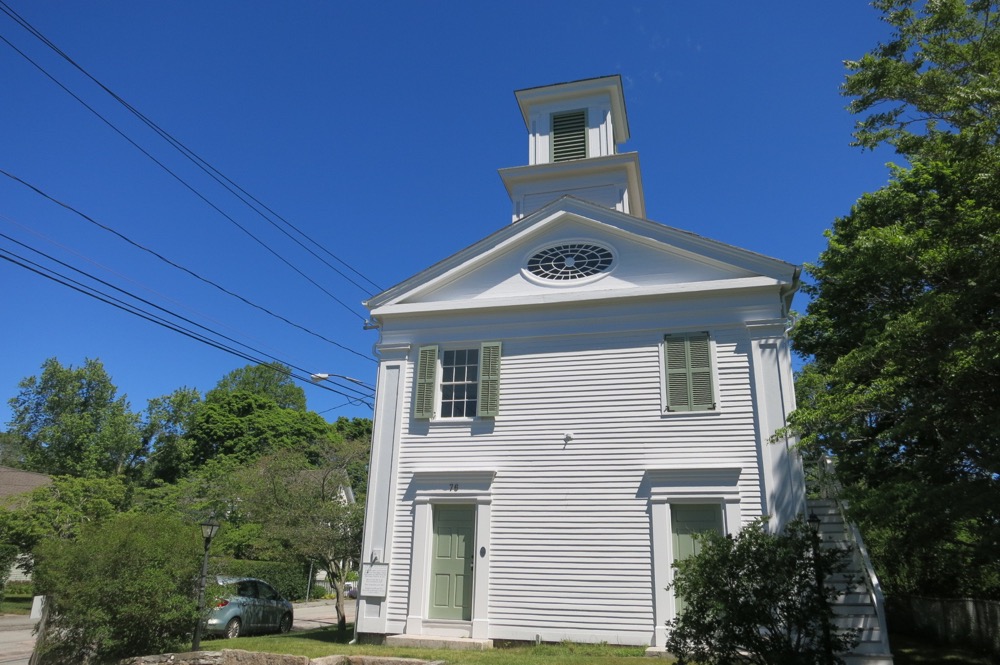 Groton, Groton, Groton. Of course Mystic has come to define a place in both towns – a beautiful, cool, historic, touristy place, sure – but Groton is Groton and Stonington is Stonington. So there.

The Mystic River Historical Society, founded in 1973, owns an ever-growing collection of Mystic-related historical books, maps, photographs, and other documents and artifacts contributed by the community. We house these collections in the William A. Downes Archives Building, erected by the Society specifically to provide a safe environment for them. 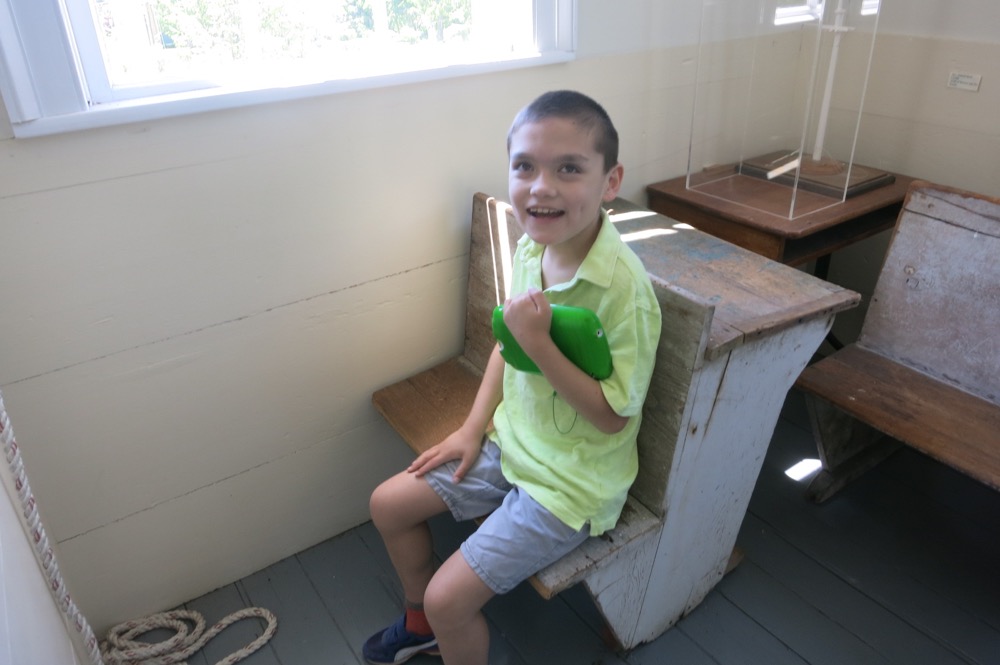 That doesn’t sound too very exciting. But Damian and I popped in to say hello and poke around. Since I’m not from the area and have no interest in old land deeds from town, we quickly asked for access to the Society’s other building next door.

Yes, this little historical society that preserves the history of a fake Connecticut town also owns the Portersville Academy, purchased from the Town of Groton in 1975 and partially restored. This historical building serves as the Society’s education and outreach space, and this is where we, as non-residents, were much more interested in visiting. A schoolroom of the 1840’s has been recreated upstairs, and historical displays form a backdrop for educational activities downstairs. 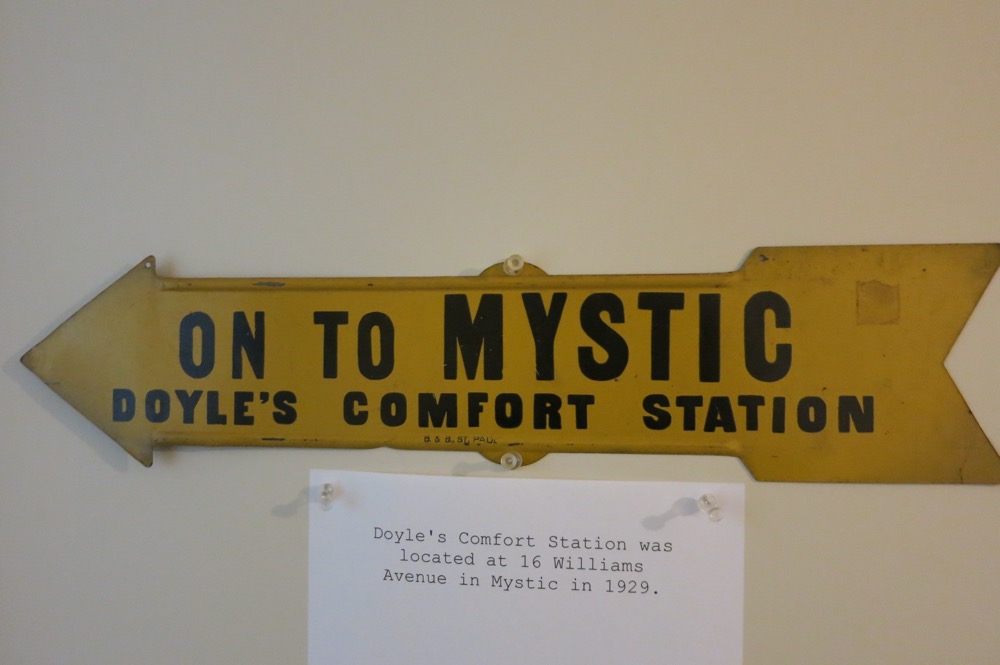 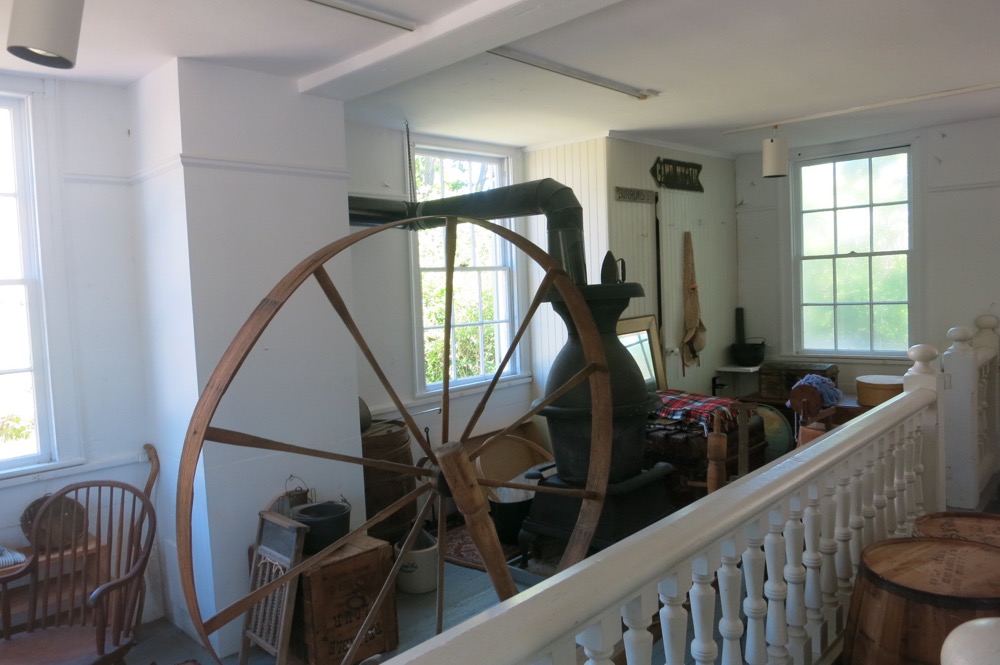 The absolute best part of our visit was that the very kind gentleman who unlocked the Academy building for us simply said, “have at it, I’m going back to my comfortable chair in the Downes Archives Building.” That’s music to my ears, especially with Damian in tow. We had the run of the place.

Portersville Academy was built in 1839 by Amos Clift as the Fifth District School and originally stood further up High Street just north of Union Baptist Church. In 1887 the Town of Groton bought the building and moved it to its present site. It was used as a District Hall for a number of years, eventually falling into disrepair before the Society acquired it. 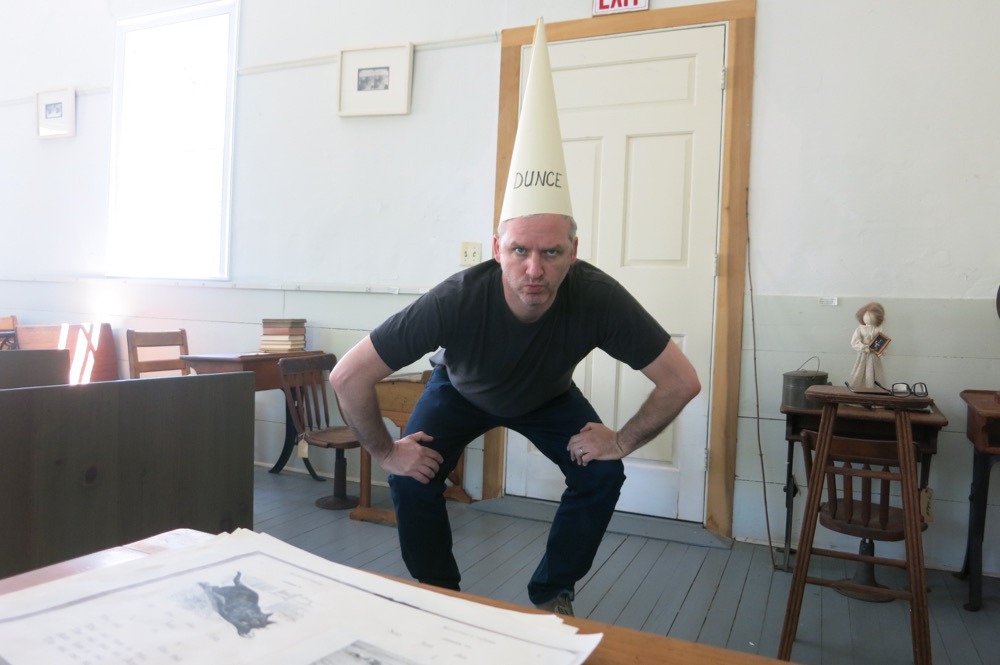 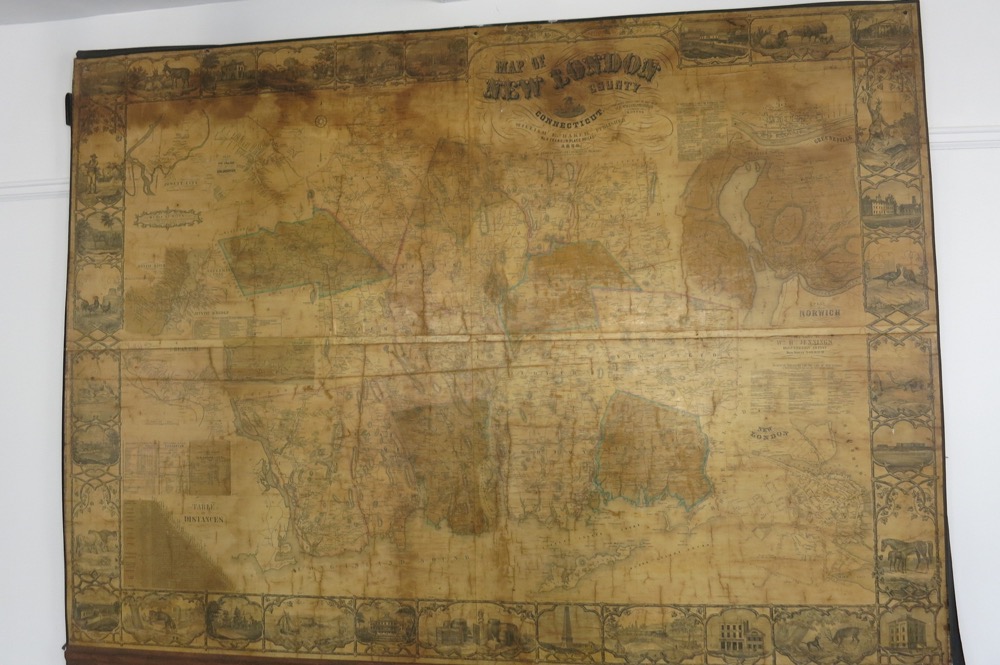 Back in the day, this part of Mystic (Groton near the Mystic River) was called Portersville. That doesn’t quite have the same ring to it, I’ll admit.

The Society and town has done a wonderful job restoring this old building. At the time of our visit in 2016, there wasn’t too much displayed downstairs. I don’t know if they were between exhibits or if that’s just the way it is. But the spinning wheel and needlework art piece and a few random signs didn’t really tell us too much about the history of the place.

Not that it matters, as Groton has plenty of other museums for that. Portersville Academy is pretty much focused on the old schoolhouse thing, and that’s fine. They’ve done a great job with that – as you can see in the pictures. 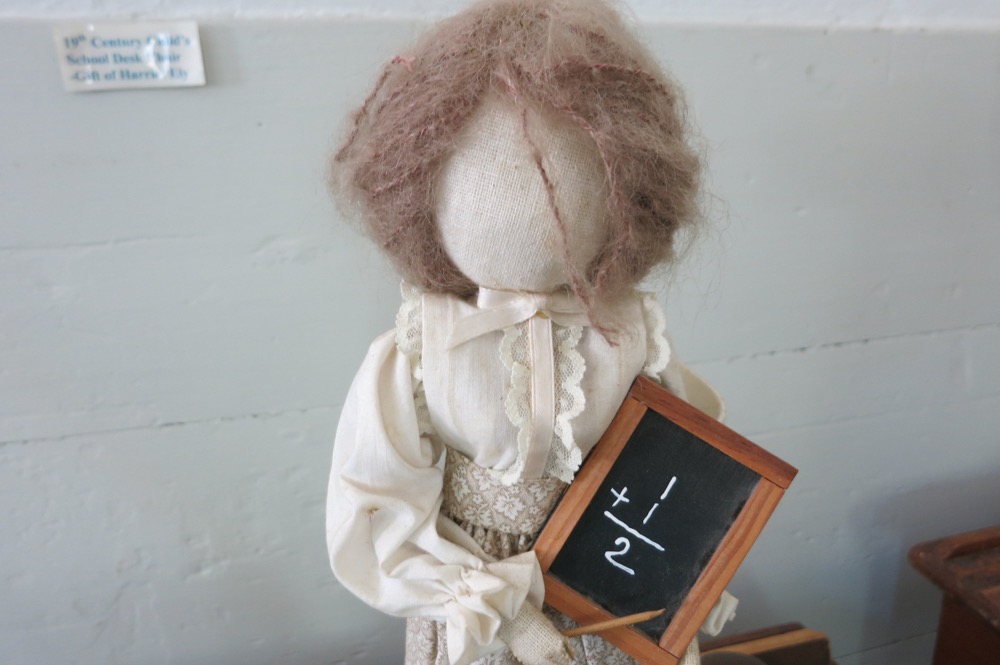 Have you ever seen the movie “Mystic River” – or read Dennis Lehane’s novel upon which it was based? The title references Boston’s slightly more famous (maybe? I mean, the Charles gets all the pub in Boston) river. It’s a story about a bunch of Irish-American men with a shared past. That past includes some very, very dark experiences that haunt them into their still-intertwined adult lives.

It’s a good movie. Skeletons in their collective closet. 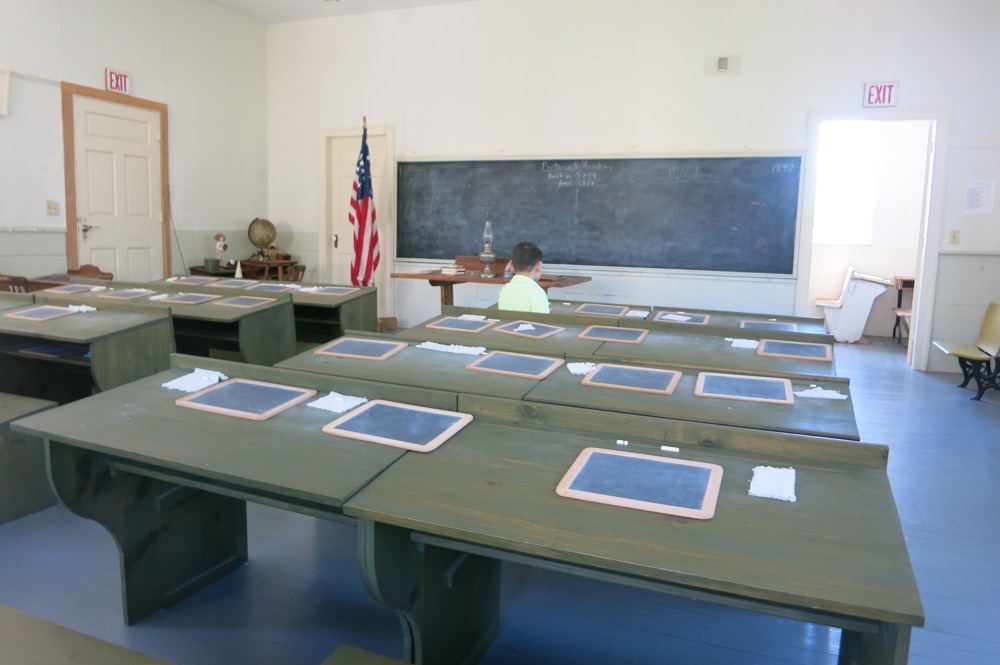 As Damian sat in old desks and perhaps thought about slate and chalk instead of the fancy smartboards and computers he’s familiar with, I took advantage of the Society’s trust in me. I opened a closet door, up there, on the second floor of the Portersville Academy, a small museum only accessible a few hours per week and only on weekdays.

I didn’t expect to find anything of any interest to me. So imagine my surprise when I moved an old American flag over to the left and saw this: 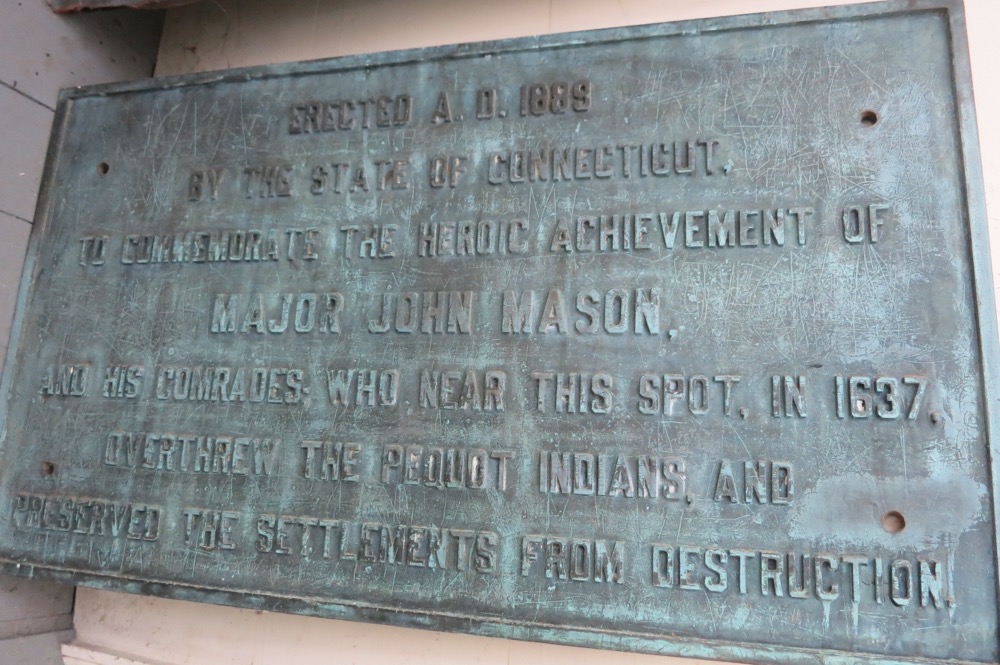 Ho. Lee. Crap. Talk about a skeleton in a (quite literal) closet.

If you know, you know. If you don’t, well, I’m not going to be the one to provide you with the full story here, but I’ll give you the gist.

This is an old metal plaque that clearly used to be attached to the infamous statue of the infamous Major John Mason. It commemorates his “overthrow” of the native Pequots nearby in 1637 during the so-called Pequot War. There is still some debate, I guess, on Mason’s role and what exactly happened, but it has come to be accepted that his tactic was essentially sociopathic mass-murder. 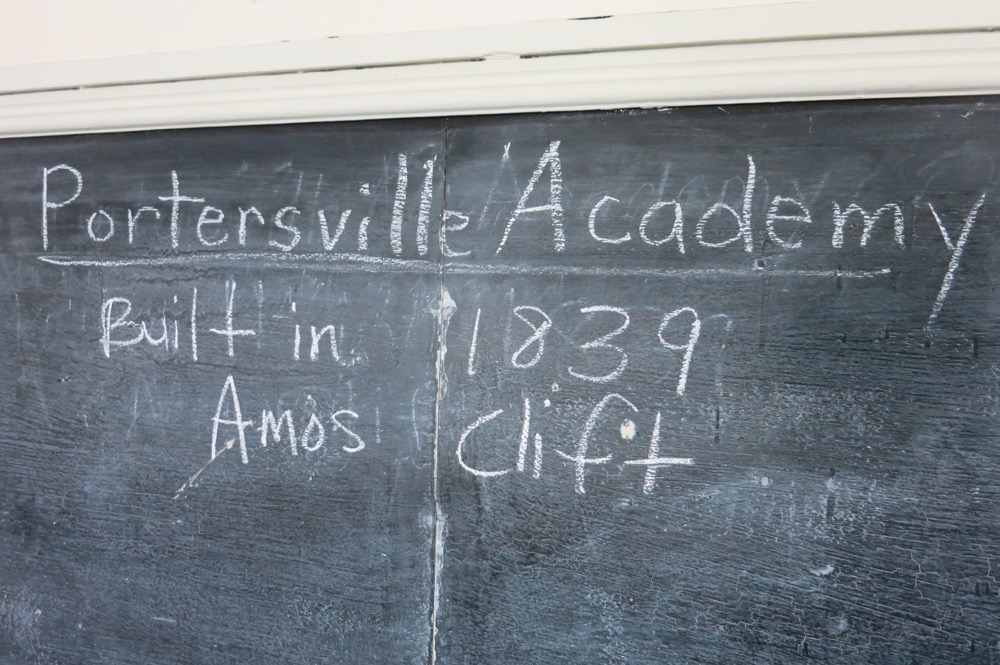 Now, granted, the colonialists would say they were being threatened. And war is hell. I have a page on the John Mason statue, here. Here’s an excerpt:

Believing that the English had returned to Boston, the Pequot sachem Sassacus took several hundred of his warriors to make another raid on Hartford. But John Mason had only gone to visit the Narragansett, who joined him with several hundred warriors. Several allied Niantic warriors also joined Mason’s group. On May 26, 1637, with a force up to about 400 fighting men, Mason attacked Misistuck by surprise. He estimated that “six or seven Hundred” Pequot were there when his forces assaulted the palisade. Some 150 warriors had accompanied Sassacus, so that Mystic’s inhabitants were largely Pequot women and children. Surrounding the palisade, Mason ordered that the enclosure be set on fire.

Justifying his conduct later, Mason declared that the holocaust against the Pequot was also the act of a God who “laughed his Enemies and the Enemies of his People to scorn making the Pequot as a fiery Oven . . . Thus did the Lord judge among the Heathen, filling Mystic with dead Bodies.” Mason also insisted that should any Pequot attempt to escape the flames, that they too should be killed. Of the 600 to 700 Pequot at Mystic that day, only seven were taken prisoner while another seven made it into the woods to escape. 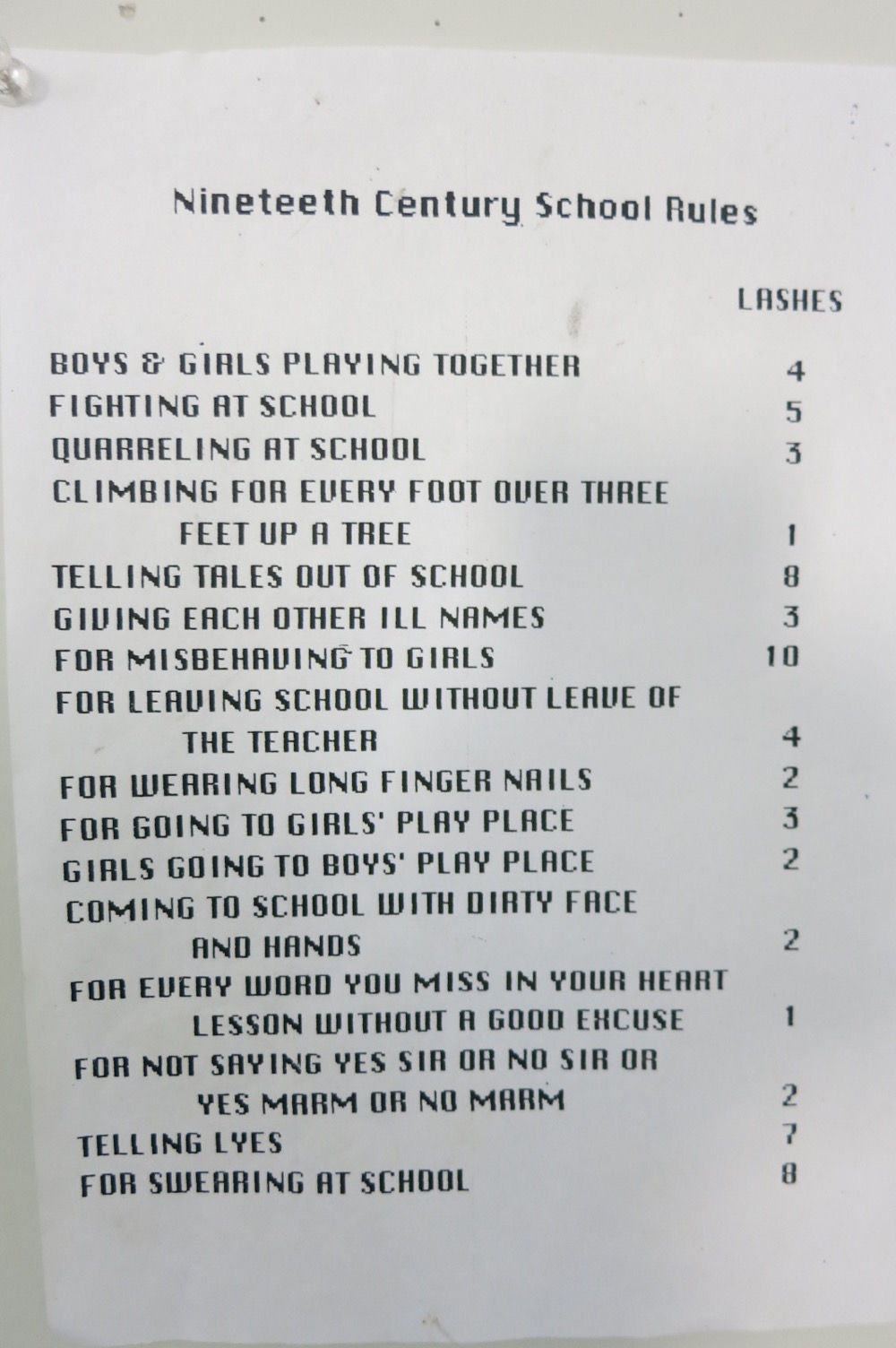 A lot to unpack here

So for years, the John Mason statue stood in Groton with a plaque honoring his “heroics.” At some point, the plaque was removed as even the most pro-John Mason crowd (which exists, and will find this page and comment someday) perhaps felt a little uneasy about the wording. Local Pequots successfully convinced Groton that they didn’t want to see the guy put on a pedestal (I love all the metaphors on this page come to literal life), so it was moved to Windsor, Mason’s home town.

Someone from the Mystic Historical Society thought to save the plaque – as they should have. It is absolutely a piece of important history. They could, someday, put together an entire history based on the plaque’s wording alone. How attitudes towards the native holocaust have slowly changed. How colonialism had its dark sides. How the English settlers screwed so many millions of Native Americans and how we, as a country, continued murdering and sickening entire populations into the 20th century. 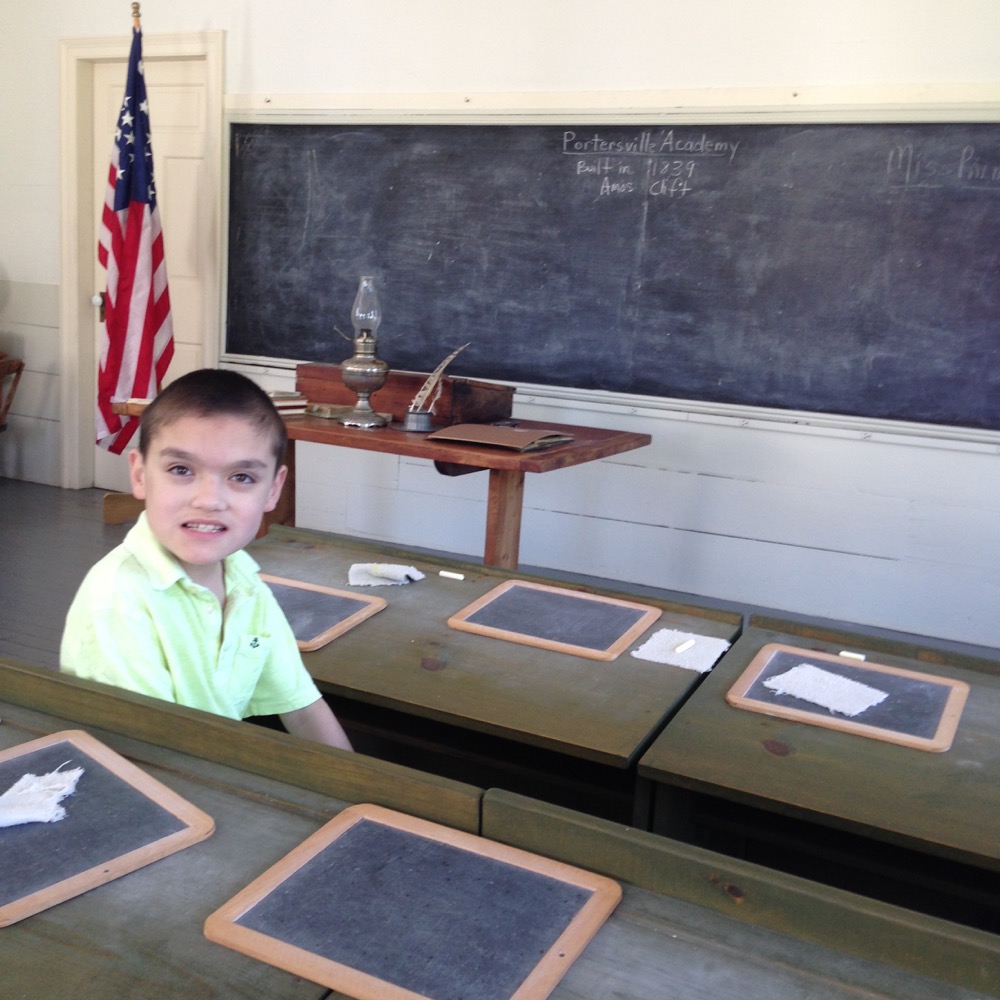 Is the plaque still in that closet? I have no idea. But that’s not how skeletons in closets work anyway. They’re always there… whether they’re physically there or not.

But I thank the Mystic River Historical Society for their preservation efforts and for allowing me to snoop around their Portersville Academy untethered. 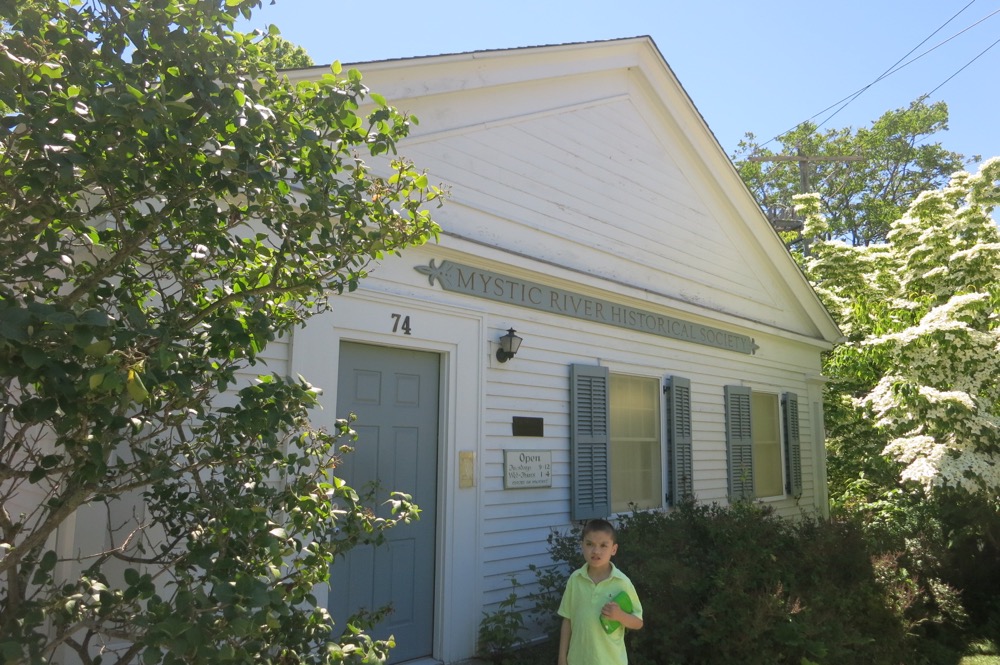