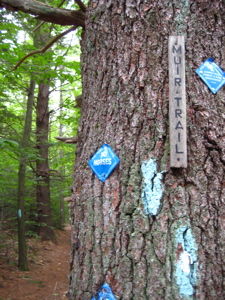 “These beautiful days much enrich all my life. They do not exist as mere pictures… but they saturate themselves into every part of the body and live always.” – John Muir.

Why is there a short little rarely hiked trail in Torrington named after John Muir? I have no idea, but upon reflection, I think every state should have a trail through the woods named in his honor. Of course, out west in in California their little 211 mile John Muir Trail merely summits the highest peak in the lower 48 (Mount Whitney at 14,505 feet) and courses through three little National Parks – Kings Canyon, Sequoia, and something called Yosemite. Whatever.

Our John Muir Trail merely moves the decimal point (2.11 Miles long) and chooses to (almost) summit the highest peak in all of Torrington (Walnut Mountain at 1,325 feet) and also traverses into State Parks – Burr Pond and something called Sunnybrook State Park. So there. 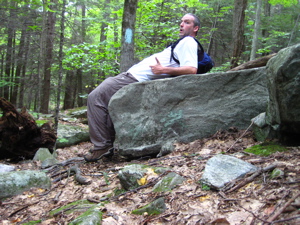 “In every walk with nature one receives far more than he seeks.” – John Muir

John Muir was an incredibly important man in our country’s history – even though he was Scottish. Well, to people like me anyway. He was pretty much our first vocal environmental activist. He has no connection to Connecticut except for his relationship with Gifford Pinchot. Long time CTMQ readers remember Pinchot was born here in Simsbury and went on to Yale and then became an important conservationist with the US Government. (CTMQ’s visit to the Pinchot Sycamore, CT’s largest tree.) 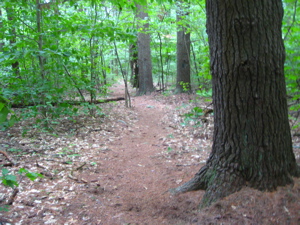 Pinchot and Muir were tight, but then had a falling out over an issue that still burns today: Muir was a preservationist and Pinchot a conservationist. That friendship ended late in the summer of 1897 when Pinchot released a statement to a Seattle newspaper supporting sheep grazing in forest reserves. Muir confronted Pinchot and demanded an explanation. When Pinchot reiterated his position Muir told him “I don’t want any thing more to do with you.” This philosophical divide soon expanded and split the conservation movement into two camps: the preservationists, led by Muir, and Pinchot’s camp, who co-opted the term “conservation.” Muir was deeply opposed to commercializing 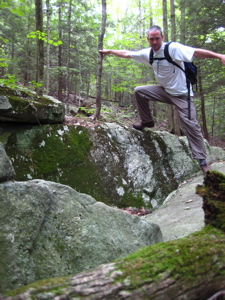 nature. The two men debated their positions in popular magazines for years. Muir argued for the preservation of the land’s spiritual and uplifting values; Pinchot saw conservation as a means of managing for the sustainable commercial use of what he prized: the nation’s natural resources.

I find this interesting stuff… and too bad both lost out miserably to corporatization anyway. And speaking of vast changes in the last 100 years, Muir was also the guy who took Teddy Roosevelt into the wilderness of Yosemite: After entering the park and seeing the magnificent splendor of the valley, the president asked Muir to show him the real Yosemite. Muir and Roosevelt set off largely by themselves and camped in the backcountry. While circling around a fire, the duo talked late into the night, slept in the brisk open air of Glacier Point and were dusted by a fresh snowfall in the morningâ€”a night Roosevelt never would forget. 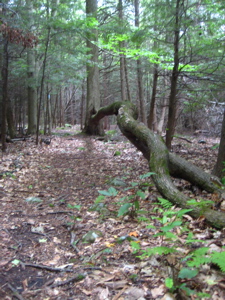 It’s really just a connector trail between the two state parks. I started off on the northern end up at Burr Pond, off of Starks Road. The first bit of the Muir Trail meanders pleasantly through a white pine grove. The trail itself is super soft here and has that nice “hiking through the pines” feel to it.

Of course, a ton of these trees had garish fluorescent orange numbers spray painted on them, probably slated for removal. John Muir would not be pleased. 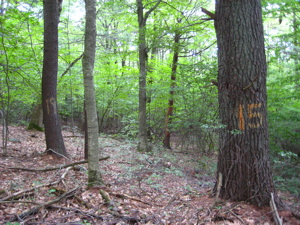 “I never saw a discontented tree. They grip the ground as though they liked it, and though fast rooted they travel about as far as we do.” – John Muir 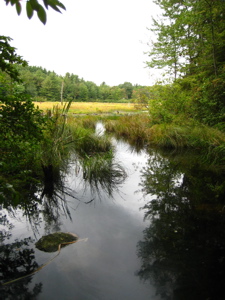 I then passed a great swamp… but it wasn’t really all that great. (Strangely, the Walk Book calls it a “great swamp.”) I thought it was merely okay. After the swamp I began steadily climbing up Walnut Mountain and crossed the rutted Buttrick Road, then the worse-off Guerdat Road. (I also crossed Devaux Road… are the French big here in Torrington?) The climb up is gradual and slight – and the trail doesn’t actually go to the summit proper. There is a side trail, but no view, so I skipped it. I’d be coming back this way in about 90 minutes again anyway, so I had another chance.

Up, over, then down the mountain, now headed west towads Sunnybrook State Park. This is the best part of the trail; not because it was downhill, but because there are many more rocks and cool formations to see here. There are also a bunch of streams that feed the Naugatuck River and I found myself enjoying this last three-quarters of a mile. 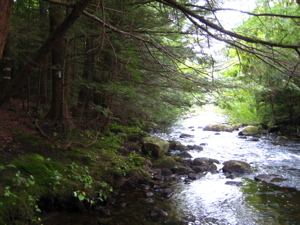 The Muir trail does partner up with the Naugatuck for a short bit and passes a seeming random stone monument in the woods, in memory of Jay Bacca. He and his wife Lorrie built the Alain and May White trails I’d be hiking next in the state park. Quite frankly, I don’t really understand the saying: 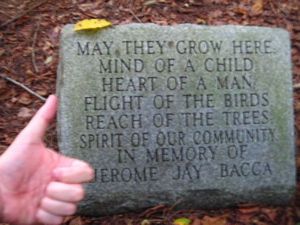 But I’m dumb. Shortly after the monument, I climbed some rather precarious stone steps up to cross the fairly busy Newfield Road before dropping back into a pine grove and finishing up at the Sunnybrook State Park parking lot.

Maybe I sound a little jaded about this trail because I hiked it twice (having had to return back up to my car), but I don’t mean to. It’s a nice little trail, a bit more poorly marked and cleared than most other CT 400(825) trails I’ve hiked though. And the thought of connecting two state park trail systems with a trail is… well, John Muir would have approved, that’s for sure.

Continue on to the Alain and May White Nature Trails in Sunnybrook State Park. 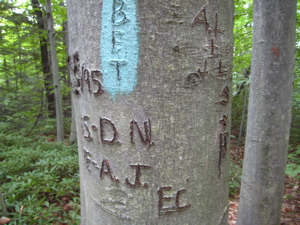 “The gross heathenism of civilization has generally destroyed nature, and poetry, and all that is spiritual.” – John Muir 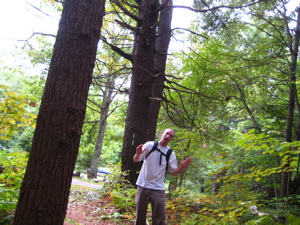 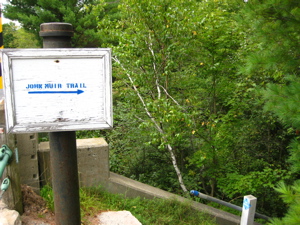