CTMQ > Everything Else > Religious > Labyrinth at Wisdom House

The Truly Wise Just Walk to the Middle
The Labyrinth at Wisdom House, Litchfield
December 4, 2010

I’ve admitted before that I don’t really “get” labyrinths. (Here, where Damian, Damian’s plaid pants and I visit the Holy Family Retreat labyrinth in Farmington.) At least that one was pretty darn cool and had some nice stone work. This one, down a steep hill in Litchfield off of route 118 was pretty dull. 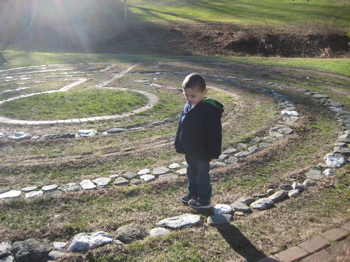 But, a labyrinth is a labyrinth and it’s not like these things are all over the place. And so, on a day after visiting a church in Middlebury (Gingerbread Village in full effect) and an Abbey in Bethlehem to see the coolest crèche in the world, we decided to keep the God theme going with a peaceful visit to the Wisdom House.

(Y’know, you could do a whole Christian God day following this route… On this same weekend, you can also stop by the Bethlehem Christmas Town Festival (we did that last year), stop in at the first theology school in the US at the Bellamy House in Bethlehem, and be sure to check out the most photographed church in New England or the country or something (Been there, done that), check out the singular Lourdes in Litchfield (CTMQ’s wondrous visit) and then ending your spiritual journey here, at the little labyrinth to collect your thoughts.) 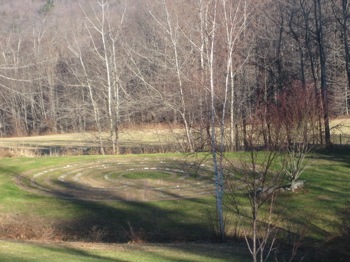 Seriously, that would make a pretty interesting full day, all with a decidedly Christian theme. Some Catholic, some Protestant, all fascinating. And now that I think about it, it’s easy enough to get onto route 8 south down to Waterbury from the labyrinth and head up to Holy Land, always a wonderful diversion.

We parked and Hoang decided to let her boys have all the labyrinthine fun. So, what is this place exactly?

Wisdom House is the interfaith center which welcomes women and men who value seeking and learning in a contemplative environment. The center is a ministry of the Daughters of Wisdom of the United States Province.

Okay. I have no idea what that means… So let’s go straight to the Daughters of Wisdom themselves… 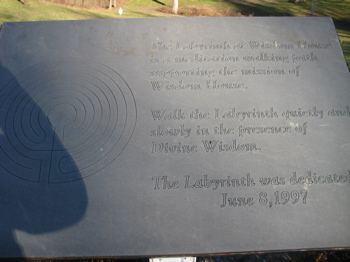 The spirituality of the Daughters of Wisdom is that of seeking Wisdom in ordinary, everyday experience.

As Daughters of Wisdom, we see all reality— creation, humankind, the joys and struggles of life—as interconnected sacred reality. For more than 300 years, we have ministered to countless women, men, and children, desiring to share with all our heritage of Wisdom spirituality.

We follow in the spiritual footsteps of our co-founders, St. Louis Marie de Montfort and Blessed Marie Louise Trichet. At the beginning of the 18th century in France, they were captivated by Divine Wisdom. Flowing from their inspiration, Wisdom spirituality is an invitation to seek and contemplate Wisdom present in a world that hungers for meaning, justice, and compassion.

Okay. No one can argue that. What lovely sentiment. But we were only there for the labyrinth.

Wisdom House is home to a classical 7-circuit labyrinth which is open for guests. If you would like to visit please call and reserve a time to come and walk the labyrinth. A donation of $5 per person is suggested. We would be happy to provide an introduction in the event that you or your group would be interested in an overview and some history. The labyrinth is best appreciated in daylight hours and since it is outdoors, weather is a consideration.

What? I’m sorry to the nuns, but I didn’t read that they wanted 5 bucks from us for walking around their grounds. I would pay yo hear about the history of the thing though, just not with Damian around. So maybe someday when I come back for the art gallery, we’ll do it the right way. For now, Damian was only interested in running down the (rather) steep hill. I love this picture: 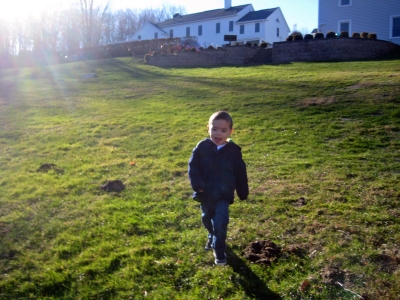 The labyrinth is one of the first outdoor ones in Connecticut. The Wisdom House website claims they are located in the “foothills of the Berkshires.” That’s a bit of a stretch, but I’ll let it slide. It was so cool to share these 15 or 20 minutes with my son. He rarely enjoys just… just playing and running around outside. To see the joy on his face in the afternoon sun – while doing absolutely nothing – was just great. I love these moments with Damian.

While I reminisce, let’s learn some more about the grounds:

As a country retreat and conference center, Wisdom House spans 54 acres of meadows, woods and brooks. Indoor and outdoor sanctuary areas and labyrinth encourage meditation, prayer and creative thinking. This property, originally known as Spruce Brook Farm, was purchased in 1949 by the Daughters of Wisdom from the family of Margaret and Frederick Busk. The Busk family estate became a convent and novitiate for the Daughters of Wisdom, and was named Mary Immaculate Novitiate. In 1960, the center also housed Seat of Wisdom College and in 1967, the center began its transition into an interfaith retreat center with the presence of a Buddhist retreat. 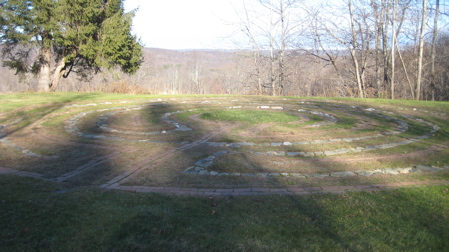 This place just gets more confusing with each thing I learn about it.

Wisdom House has several buildings on its campus, the oldest, with fireplace dates back to 1770. The barn, built circa 1925, is now a meeting room. The colonial brick building, an outdoor swimming pool, 50 acres of meadows and forests, all comprise the campus of Wisdom House. 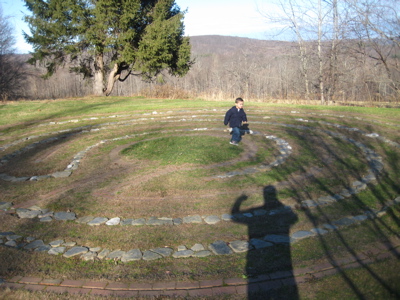 Okay, that’s enough. Back to the labyrinth.

Truth is, I don’t really have all that much more to say about it. It’s pretty much flush to the ground as you can see and let’s be honest: I’d feel like a real goofball walking the actual path one is supposed to walk to get to the center. Damian felt the same way as he hop-hop-hopped to the center and simply just kept asking to run down the hill again.

Before trudging back up, though, we walked around the grounds a little bit and went to the Jesus shrine thing tucked in the back corner of the property. Damian doesn’t quite yet understand the purpose of these things: 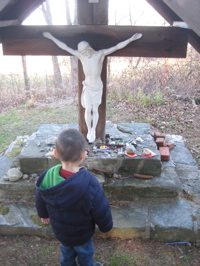 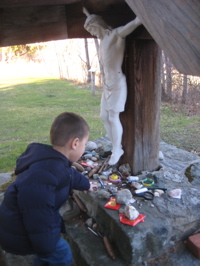 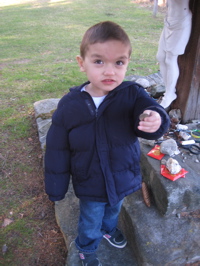 My kid cracks me up.

We went back up the hill (which Damian climbed all on his own, almost amazing enough for me to ascribe a miracle to it) only to bumble-run back down it again. It was grand. And mama missed it all, resting up in the car.

A few days later I was asking Damian if he remembered the fun we had “running down the hill” and he nodded and then said “mama” while doing his questioning pantomime. In other words, “yes, I remember and it was indeed fun, but where was mama?”

Cracks me up, that kid.