I know you all have felt that indescribable rush of learning that there’s a museum within a museum. There’s nothing quite like that “two for one” feeling. At the New England Carousel Museum in Bristol, it’s even better – or at least it was in 2016. There were three distinct museums under one roof! 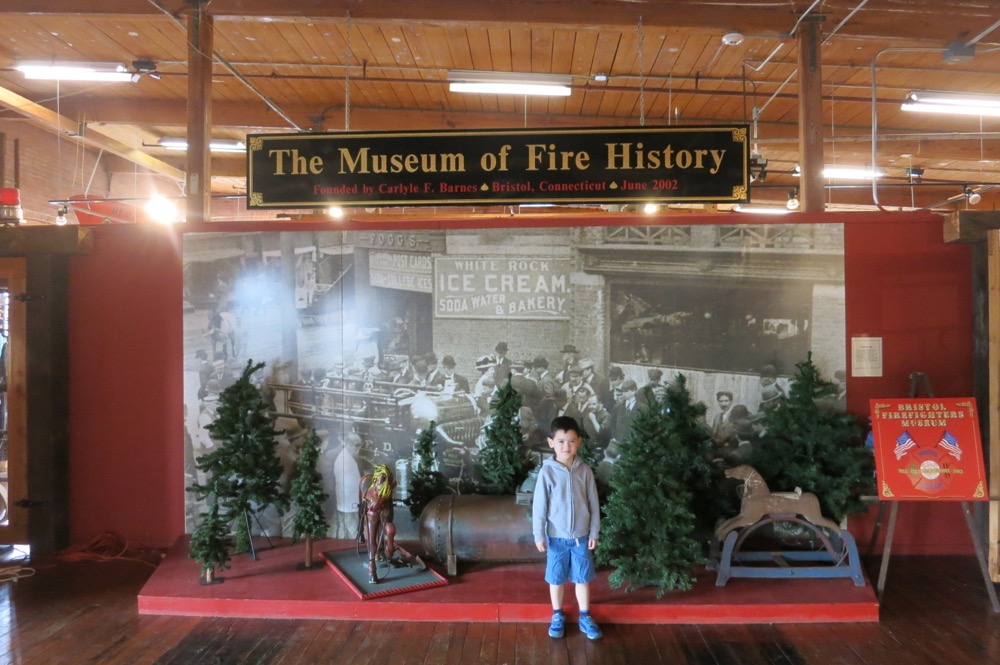 Praise be! And the Museum of Fire History is a large and very worthwhile museum on its own, situated on the second floor of the building that houses the Carousel Museum. There are a dozen or so fire museums in Connecticut, and this is one of the better ones.

And the craziest thing is, it’s almost all from one man’s personal collection: Carlyle “Hap” Barnes. Barnes’ great-great grandfather started the Bristol fire brigade in the 1800’s. His father did something with the fire department. Hap was involved as well. (No word on if younger Barneses exist in Bristol and what their vocations and avocations are.) 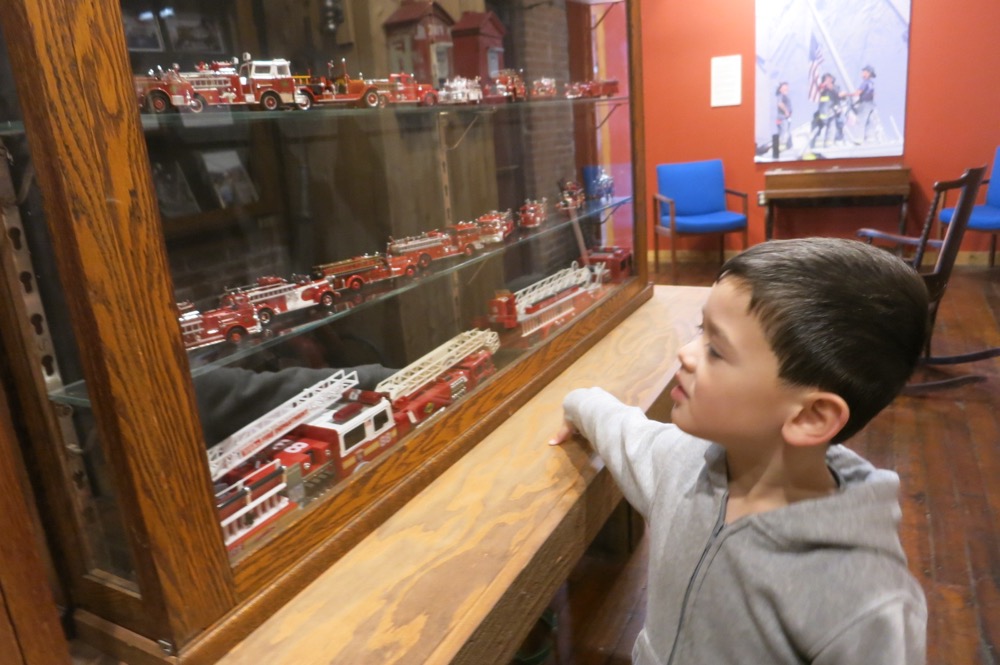 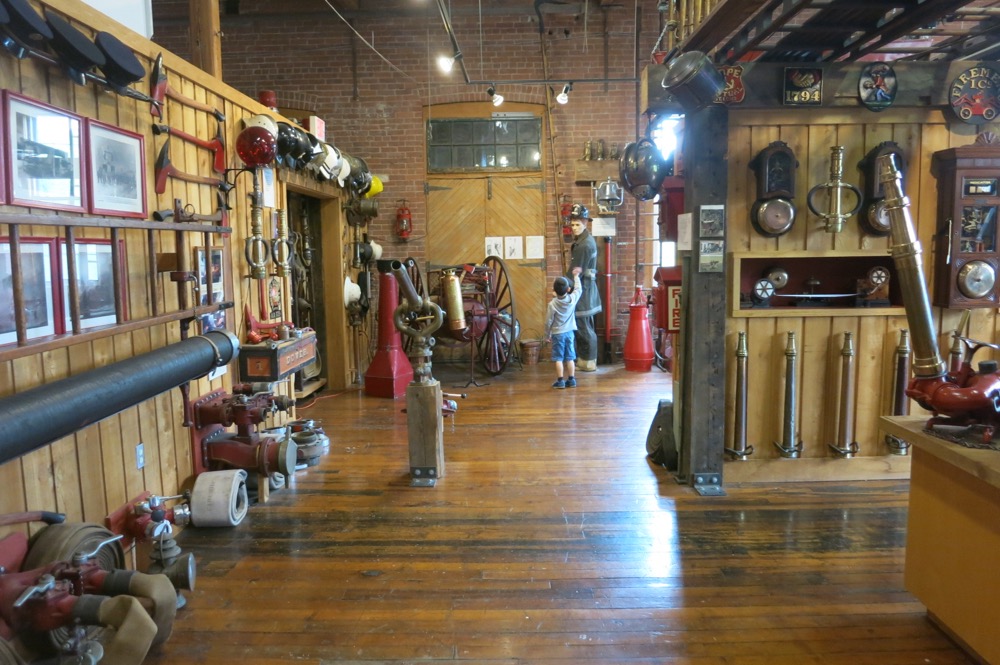 Yes, apparently this massive collection of firefighting equipment and history was housed in Hap’s basement at one time. I believe it was displayed neatly and he welcomed people to come and view it back in the 1990’s. In 2002 he donated the whole thing with the support of the Barnes Foundation.

The funny thing is I don’t know if Hap Barnes was any relation to the Barnes family of the Barnes Company (and Foundation) that is nearly synonymous with Bristol. Let’s say… yes? And that’s how a person had enough space to display all of this in his basement? 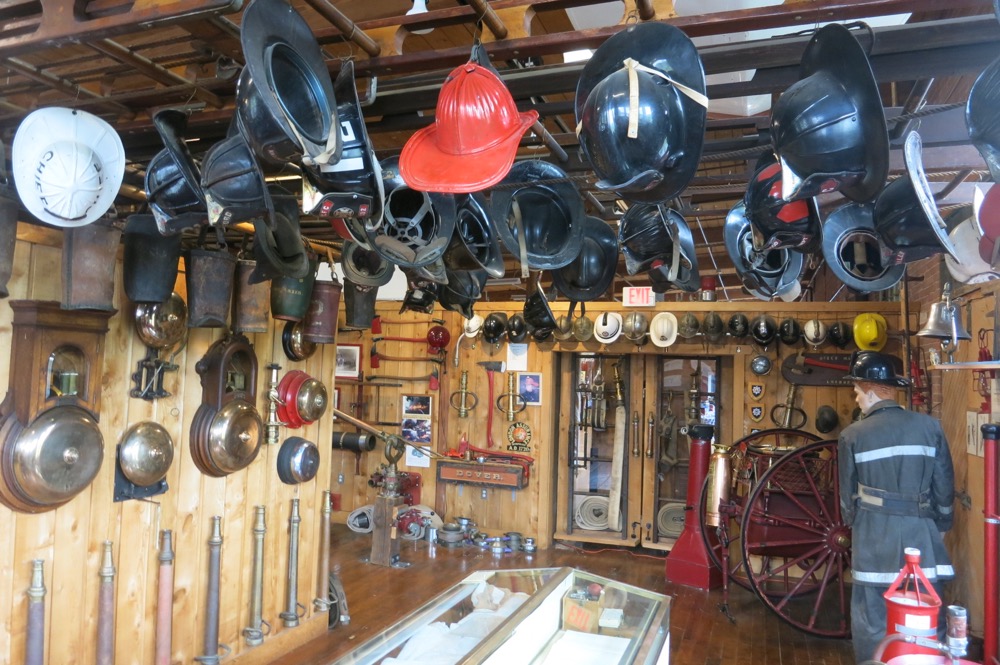 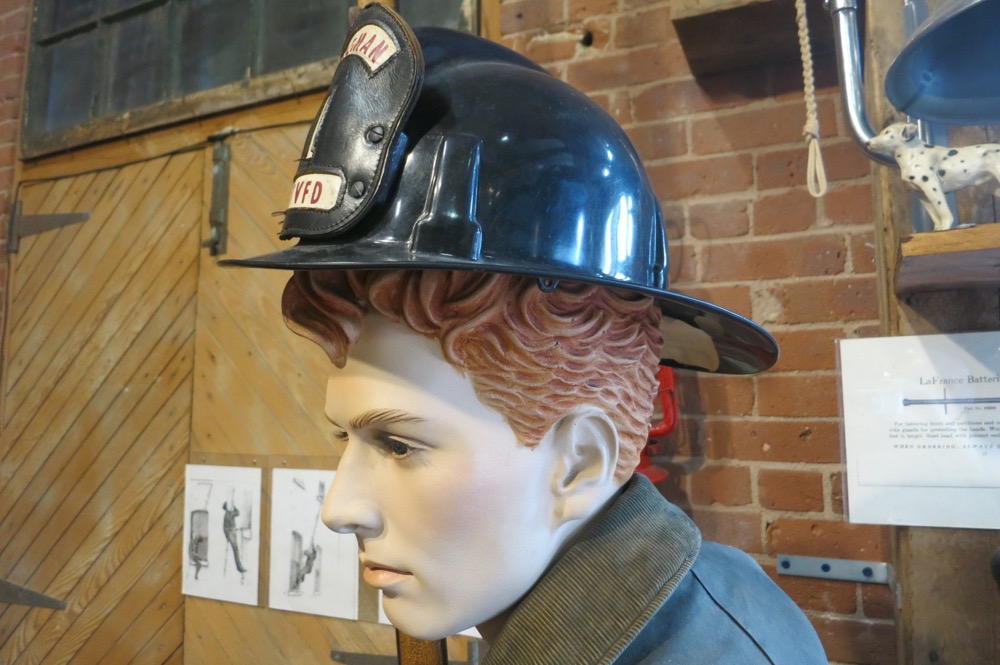 Ah, yes. I was right. Hap Barnes was a retired executive from the Barnes Group, the international manufacturing company based in Bristol. Hap served as the corporation’s president and CEO and later as chairman of its Board of Directors.

Not everything here is from Bristol or even Connecticut. There are some international pieces as well as stuff from other states. That makes this place unique among the other fire museums around the state.

Discover a fascinating array of fire-fighting and fire house signaling equipment and memorabilia. Wonderfully displayed with alarms to sound, levers to pull and uniforms to try on. The Museum of Fire History is the perfect location for preschool group to learn and discuss fire safety. Let our guides and retired Firefighters meet and teach your group how these tools and techniques save lives every day! 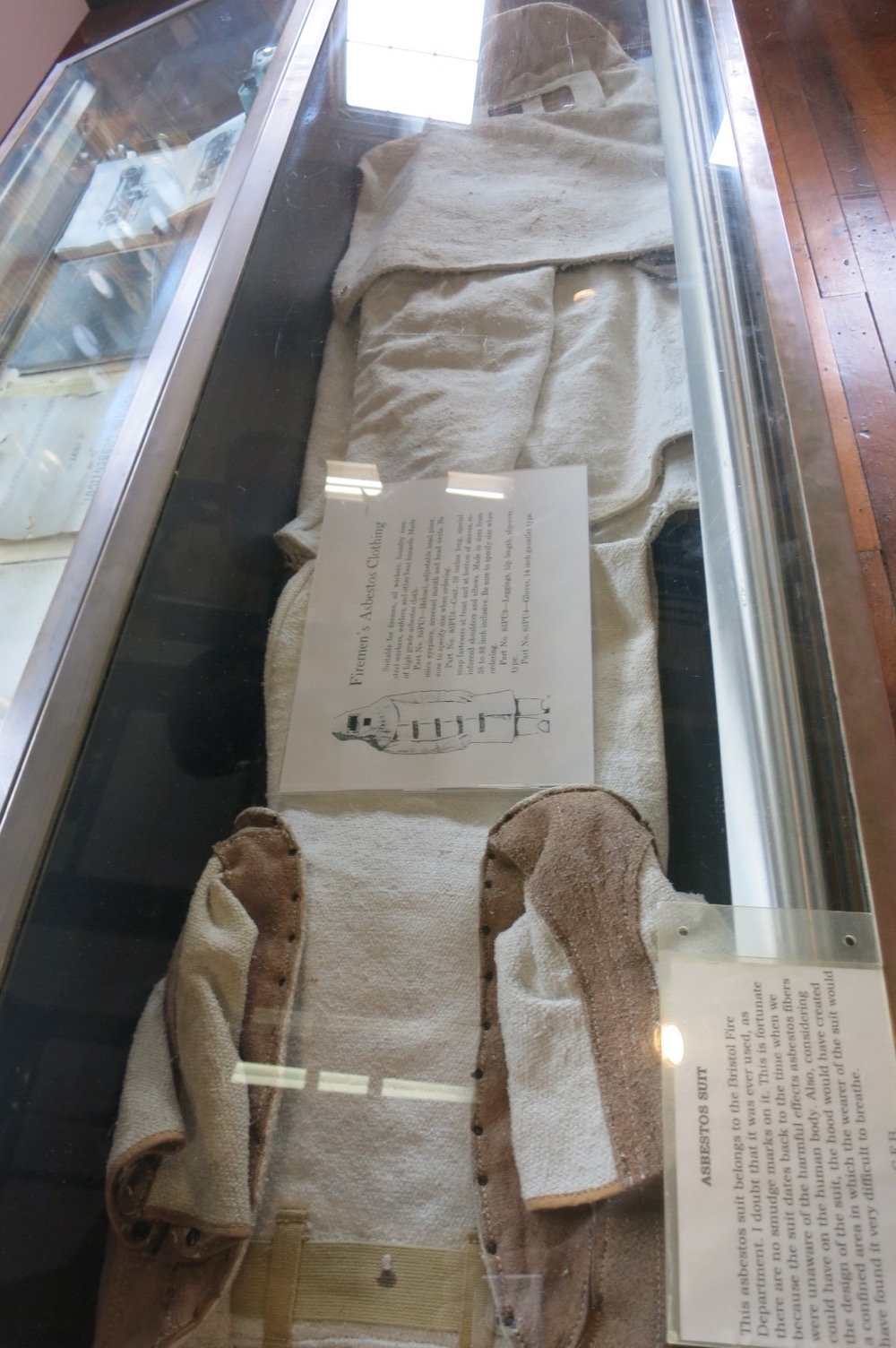 How did this come about? Let’s hear from Hap himself.

“Back in 1948 at Wesleyan University, I began chasing fires, due, I think in part, to my family history. My great-great grandfather and two other men started the Bristol Fire Department in 1953. It must be in my blood. I had the opportunity to be appointed to the Bristol Board of Fire Commissioners in 1957 served until December of 1993. During that time, and started collecting fire memorabilia – helmets, gongs, nozzles and much more, placing them on the ground floor of a home we built in 1965. This home included a game room with a bar, the front of which simulated the back end of a fire truck. In recent years, the collection had grown to the point where my wife Betty wondered what we were going to do with all of it and wished we could put it somewhere where more people could see and enjoy it. Over the years we had though, half heartedly, of opening a restaurant and calling it ‘The Bell and Siren.’ Fortunately, that never materialized, particularly since neither of us had restaurant experience.” 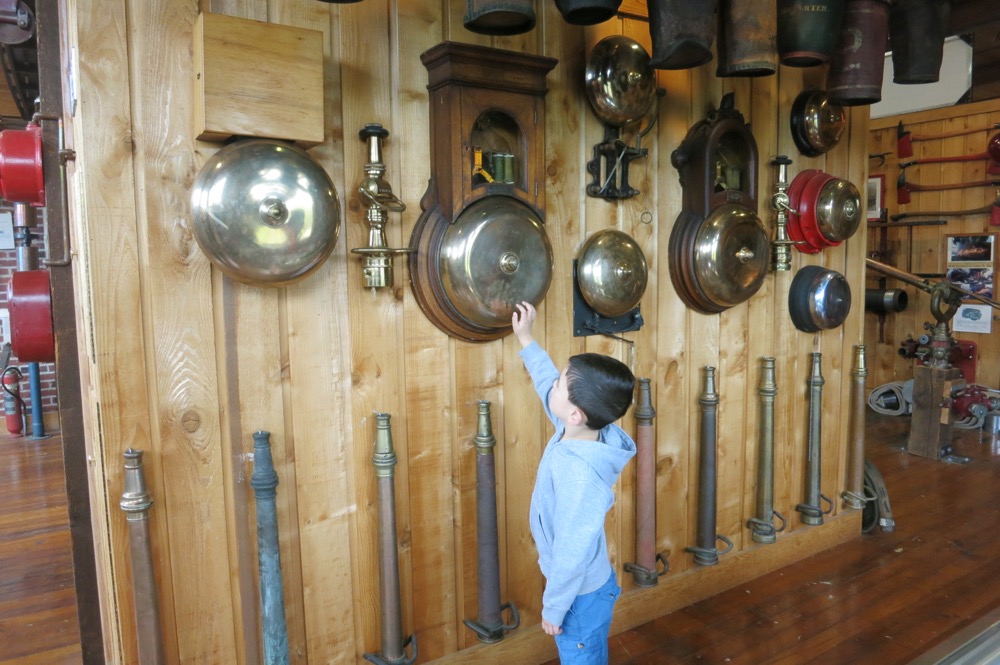 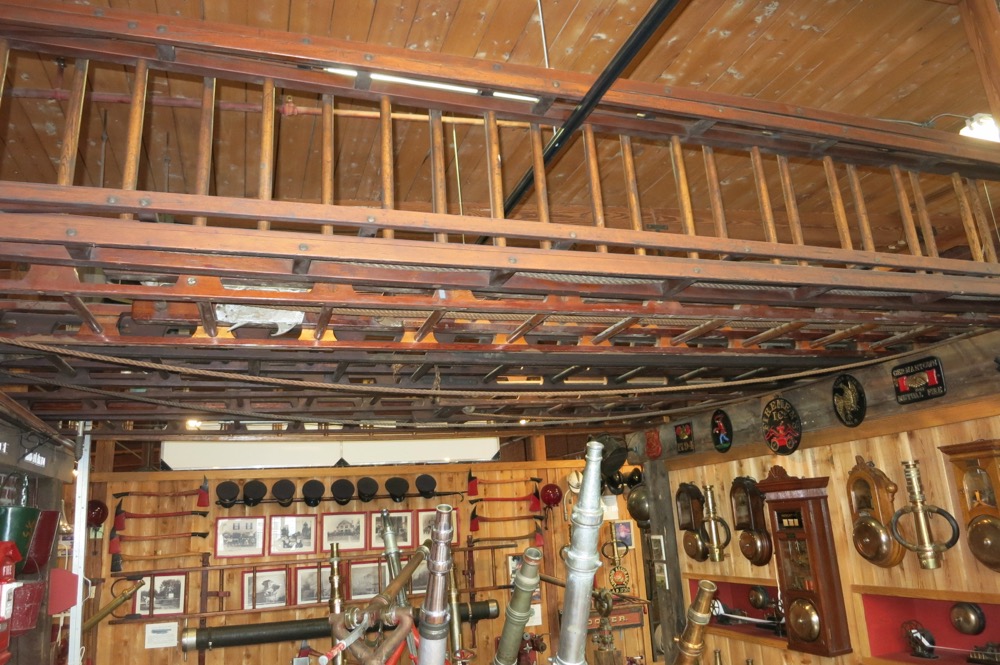 The museum features fire department and firefighting antiques and equipment and firehouse memorabilia and collectibles dating back to the mid-1800’s. In addition, the museum features the documents, artifacts, photos, and equipment from which the history of the Bristol Fire Department can be traced. The city of Bristol has donated some artifacts and documents as well.

It’s an incredibly rich collection. Of course, the mere fact that five-year-olds can make an ear-splitting din over and over is what we came here for. 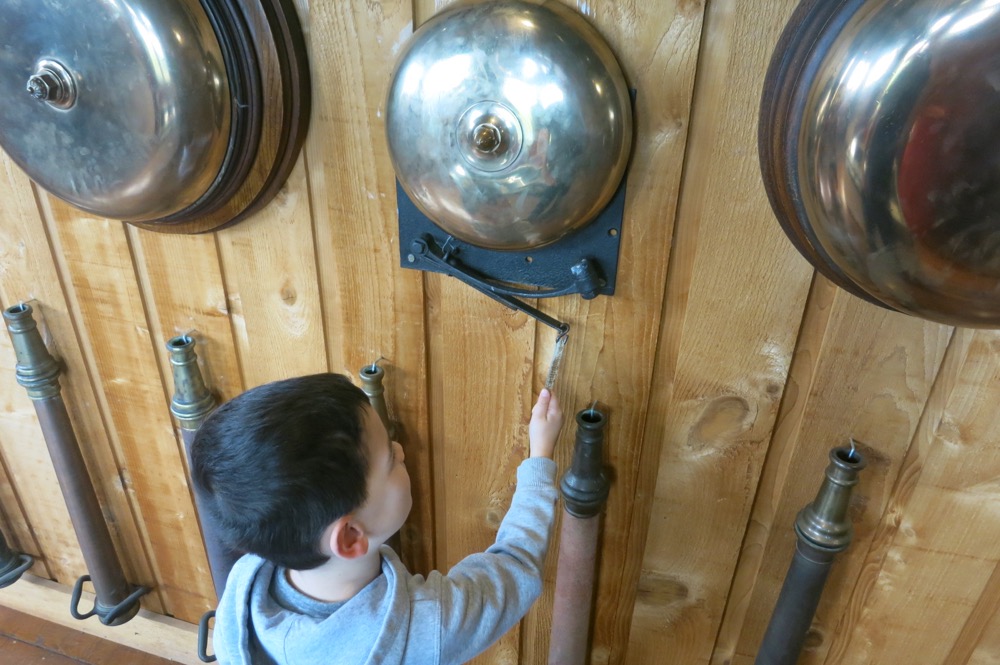 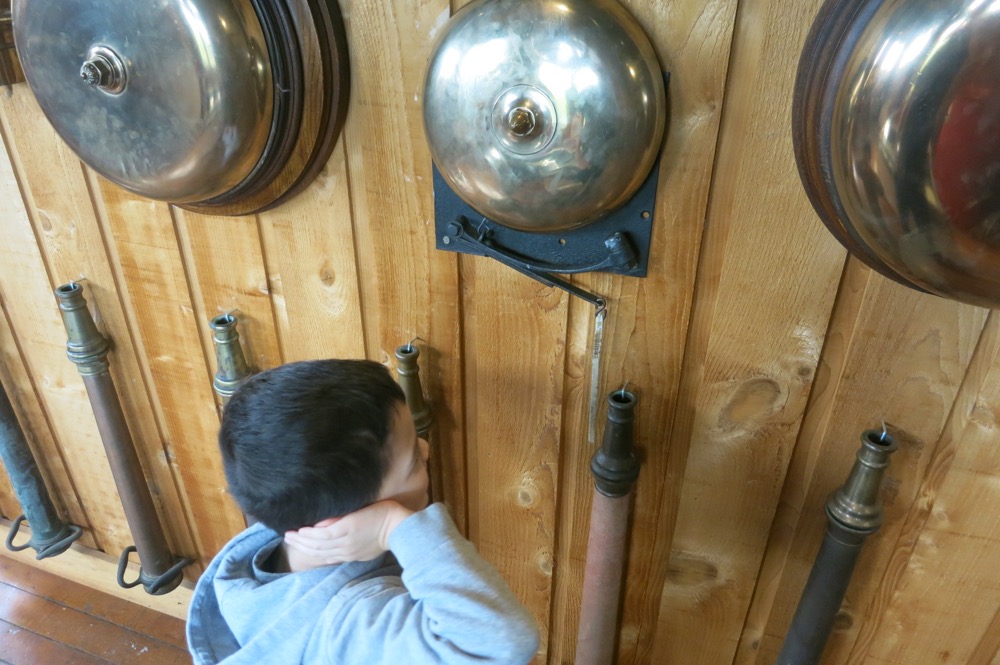 Gee, that was fun.

Moving on, because surely my five-year-old got enough of the clatter, and – 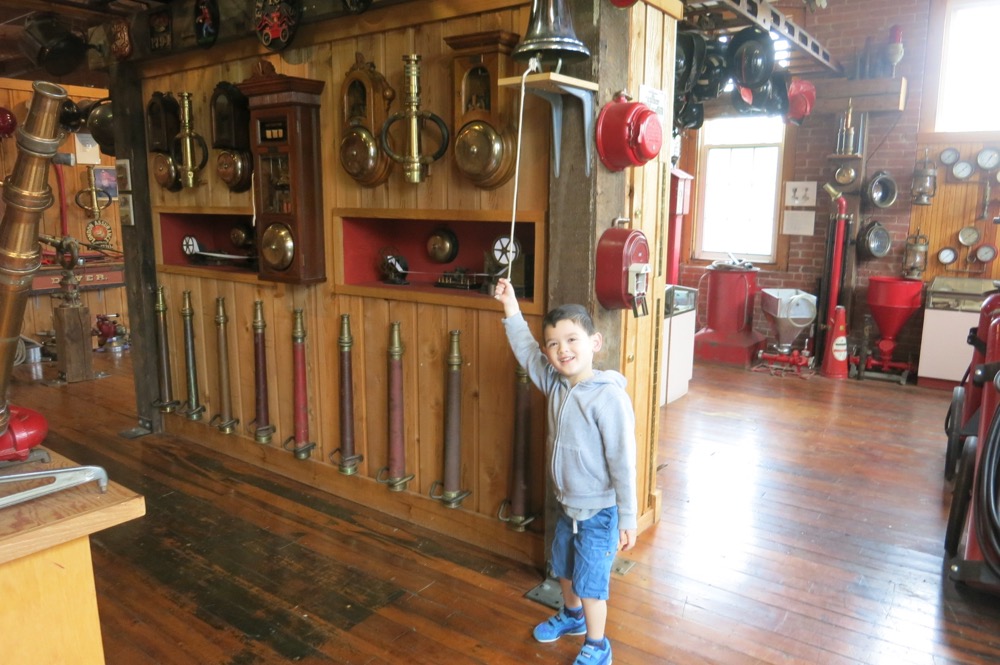 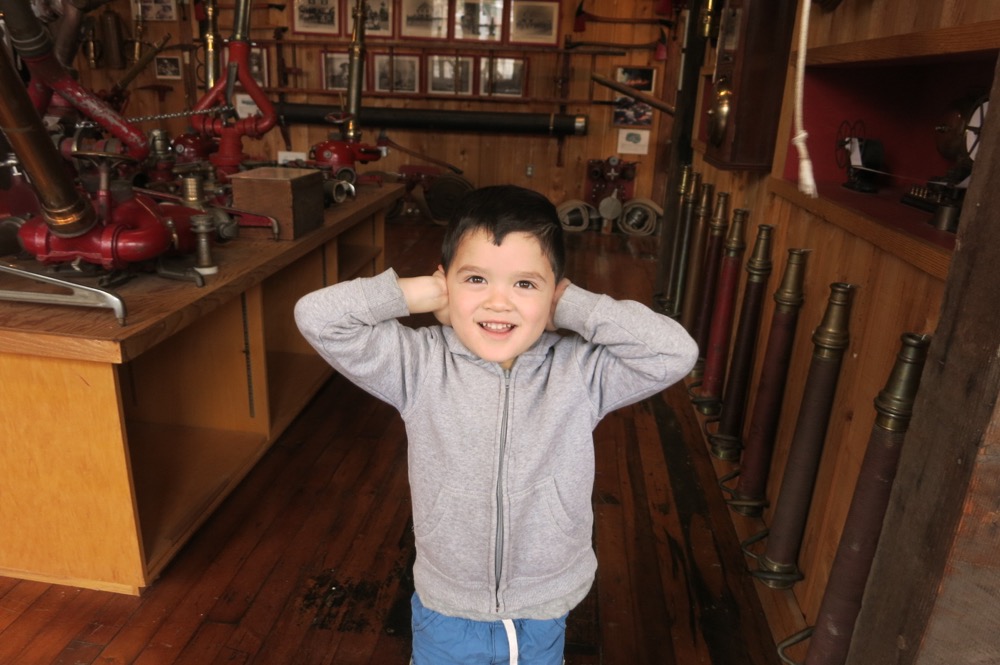 My word. I’m over here trying to read about the code signal transmitters and tape registers and take up reels! (Seriously. There were rather cool inventions back in the day, and I believe the museum has working machines that tour groups can use.)

Before the advent of radio communication between a dispatcher at headquarters and the outlying fire stations, a code signal transmitter was essential to the fire alarm system. The transmitter could be manually set to operate the alarm and recording equipment, and its purpose was threefold. It was to sound alarms received by telephone, alarms from sources other than fire alarm boxes, and to sound alarms for special purposes and emergencies. 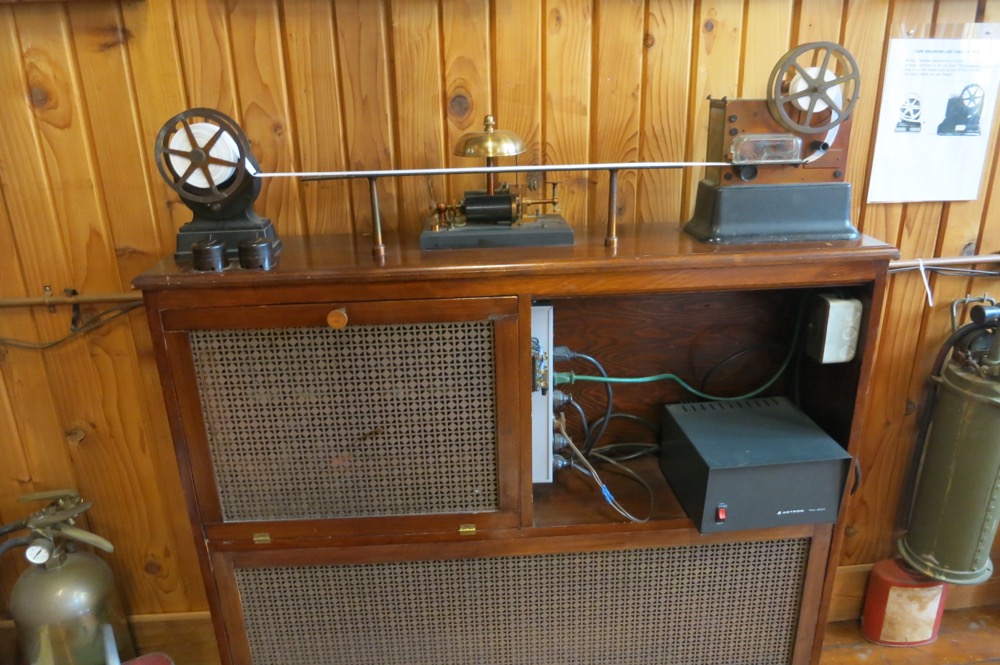 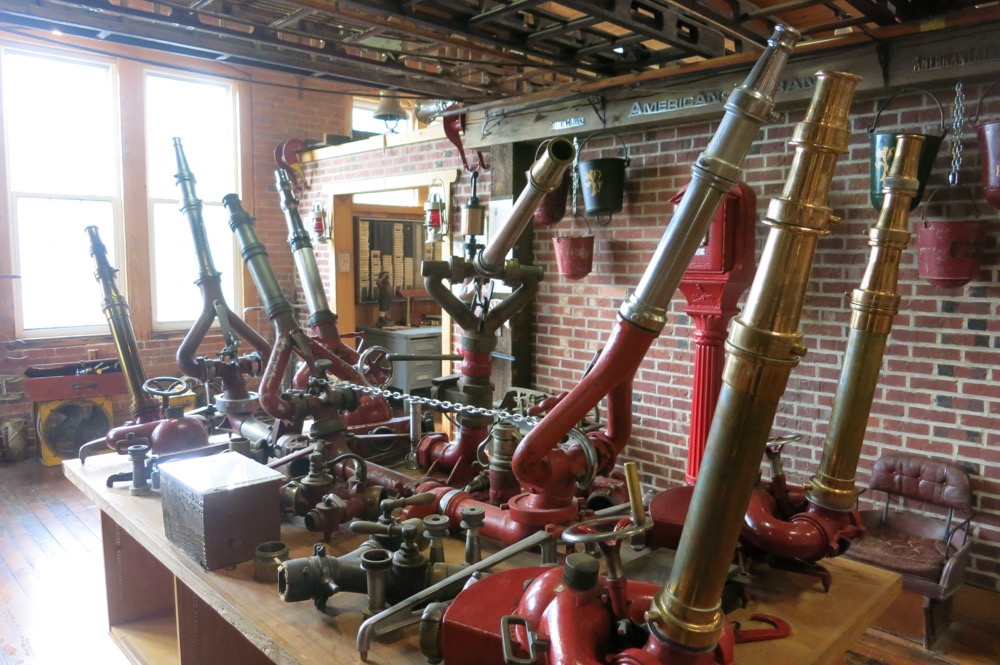 I’m happy to see you too.

Detachable code wheels formulate the code signals. Each wheel corresponds by code the location number of each fire alarm box connected to the system. When an alarm is sounded that did not originate at a fire alarm box, the code wheel that corresponds to the alarm box nearest the scene of the fire is selected. It is then placed on the transmitter mechanism and with a pull on the lever, the alarm is transmitted to the various outlying station.

Okay, that’s enough. This particular fire museum is large, clean, and very well presented. It could be the definitive fire museum in Connecticut. So be sure to head upstairs after you’re all done with the carousels and stuff on the first floor. If only to make some serious noise. 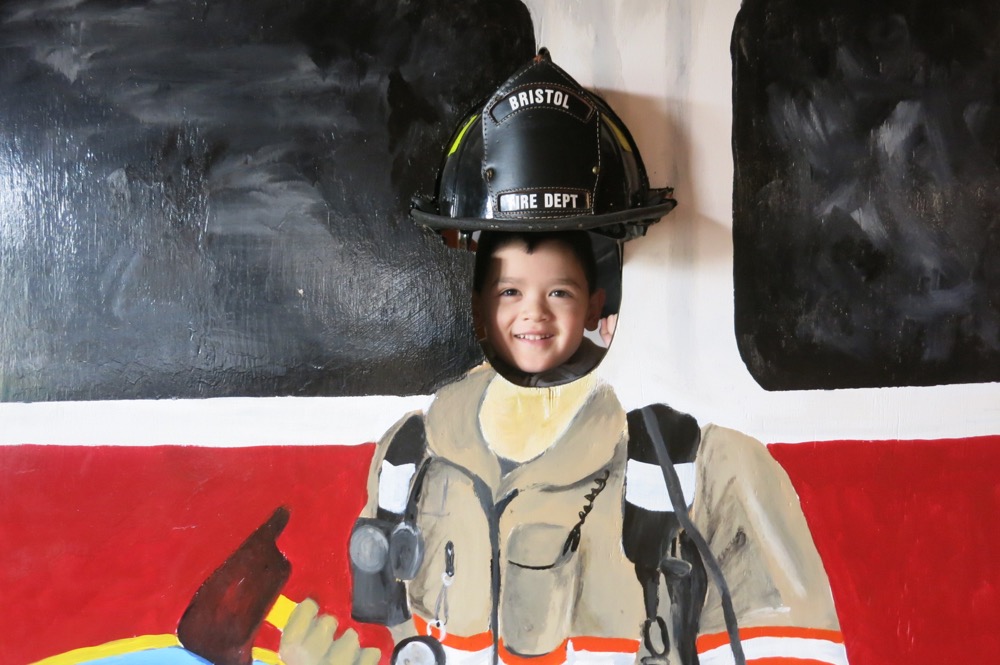