Be honest with yourself; if someone said, “hey, let’s go check out that ravine in Vernon,” what would you think?

You’d think that person is either lying, crazy, or both. 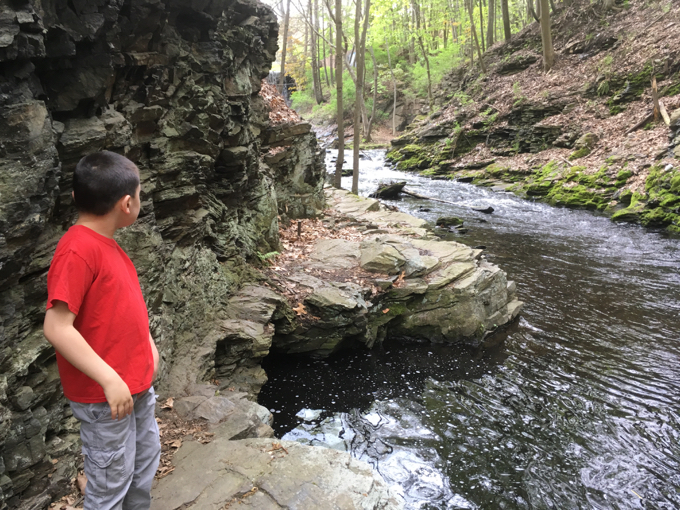 Well, the ravine is real. And it’s spectacular.

Okay, that last bit isn’t true… though, since we’re talking about Vernon, Connecticut – mere yards from I-84 – it kind of is in a relative sense. 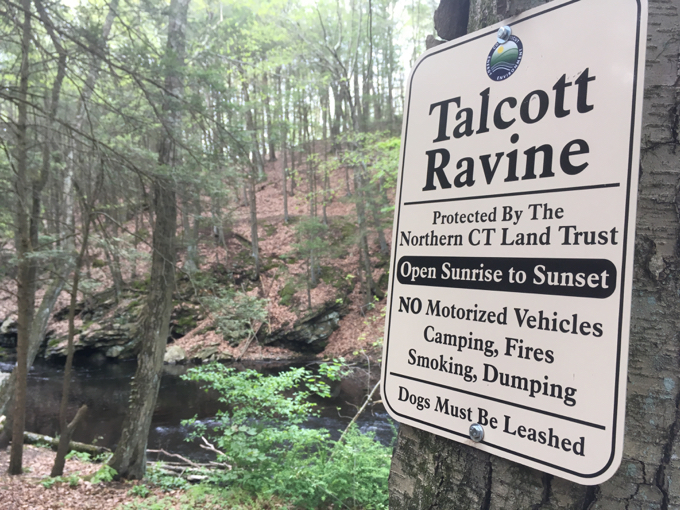 The best part is that while I was walking down the flat path next to Tankerhoosen River, I was thinking, “ravine? C’mon now. There’s no ravine here.” And even after you skim this page and look at the pictures, you’ll be thinking the same thing if you take this same walk. 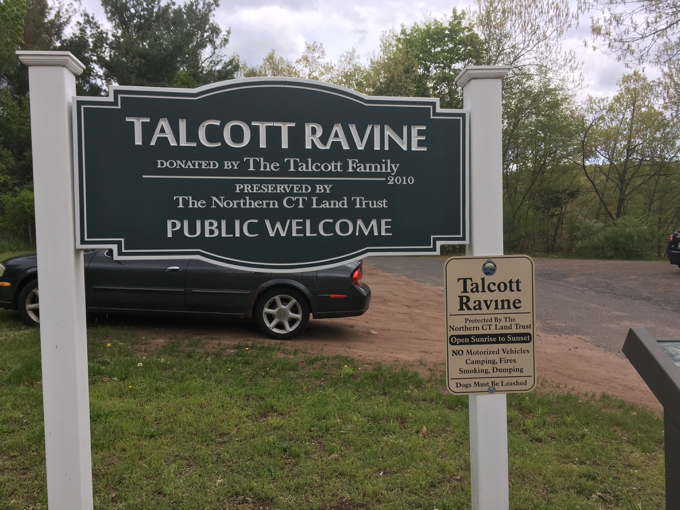 The trail begins at the Main Street cul-du-sac in the Talcottville section of Vernon. This is the first weird thing… Vernon’s Main Street is a short little dead-end off of route 83. 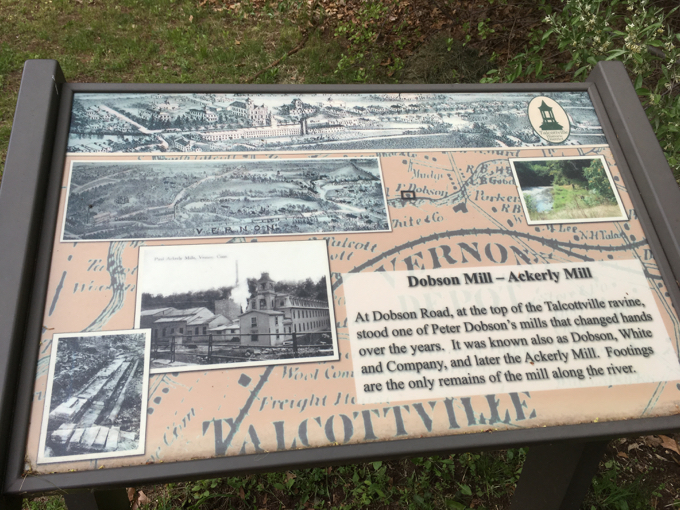 I can only assume this is a historical relic of the town’s industrial past. To reach the trailhead, you must drive through the Talcottville Historic District. 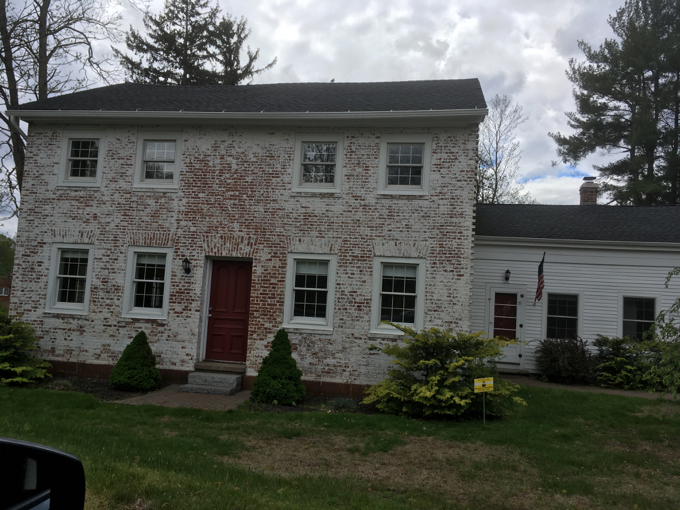 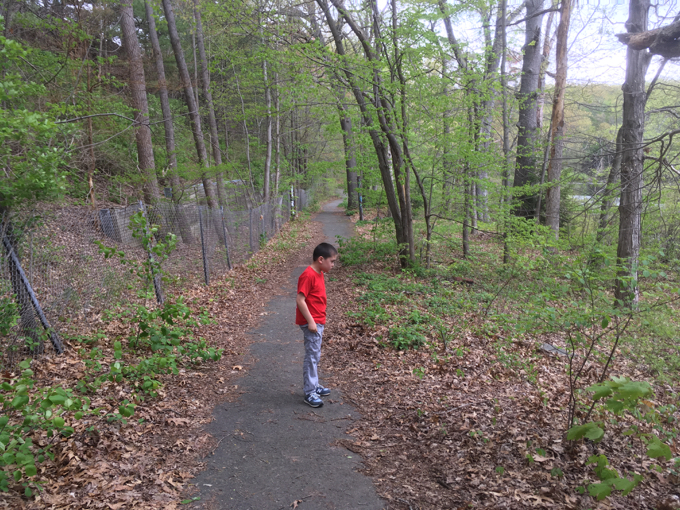 From what I could see, they’ve done a good job with signage. Every other house/building/natural feature has a sign explaining what it was back in the day. That link in the preceding paragraph explains it all for you if you are interested. 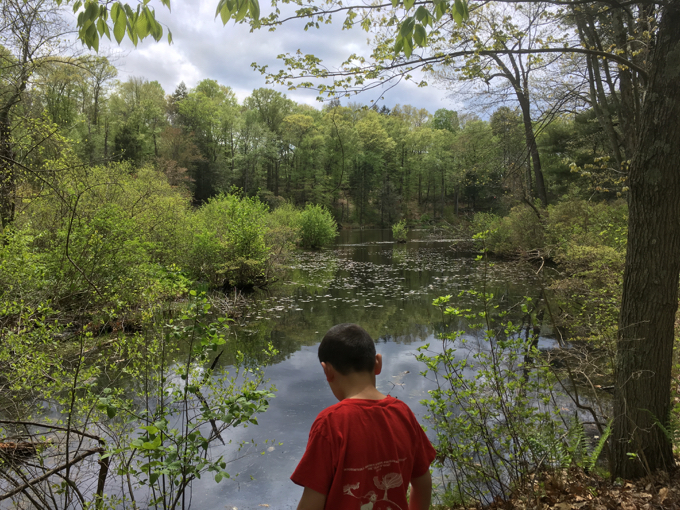 The hike: the parking area is quite large and for whatever reason, there were a bunch of lone people in cars texting. I didn’t get a sketchy vibe at all, but it did strike me as a little weird. 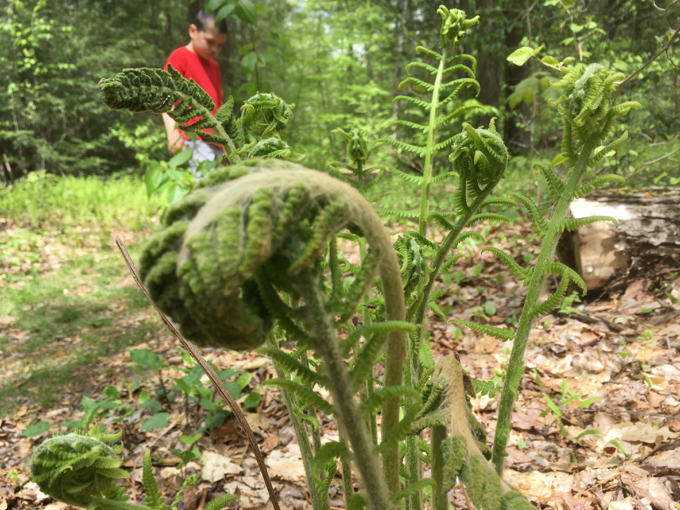 The first stretch of the trail is paved and flat and travels alongside Talcottville Pond. It is also right alongside I-84, but is fairly well-hidden by the walls up the hill. 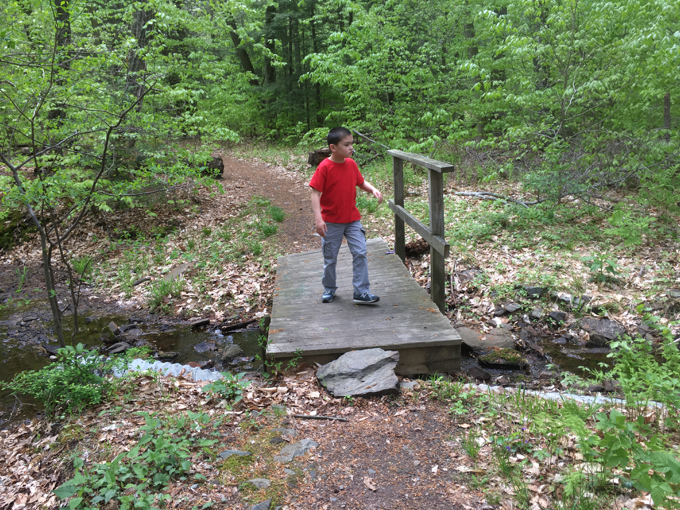 After the pond/marsh area, there is a nice stretch along the Tankerhoosen through some white pines and hemlock. The river here is more of a river and the trail is more of a trail. 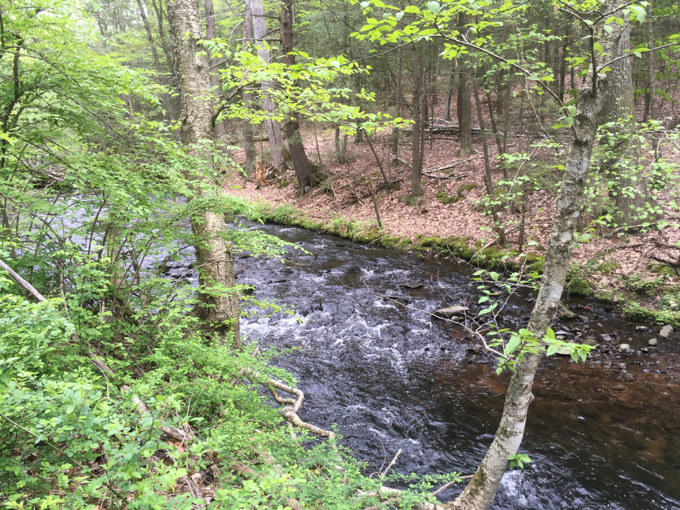 There’s a split near some remnants of factory walls (or something). One trail heads up the hill and the other continues along the river. We chose the river walk. 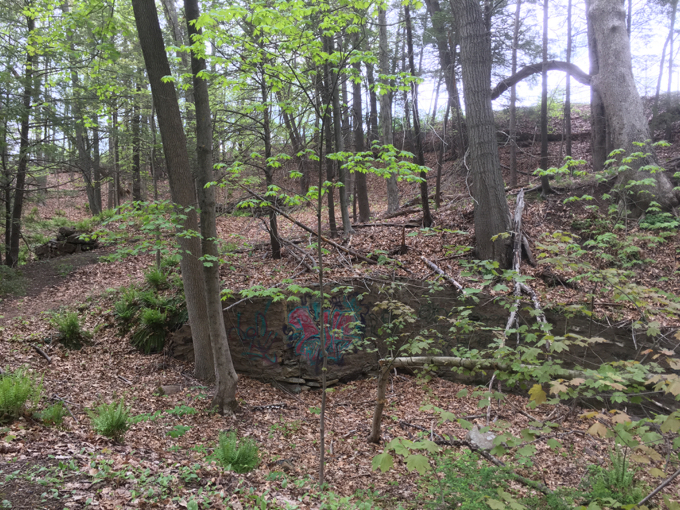 Then, all of a sudden, a wall of rock appears! And a fake CT cave! (It’s just a hollow area in the rock face that I’m sure appears on some CT Cave list somewhere, but I’m going to ignore it.) 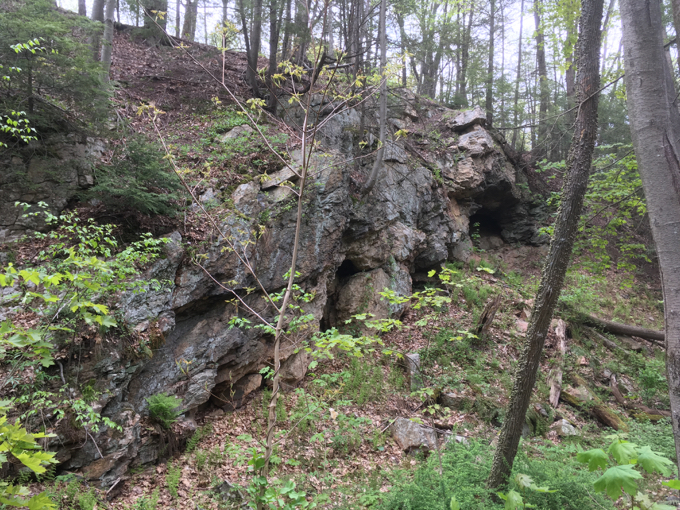 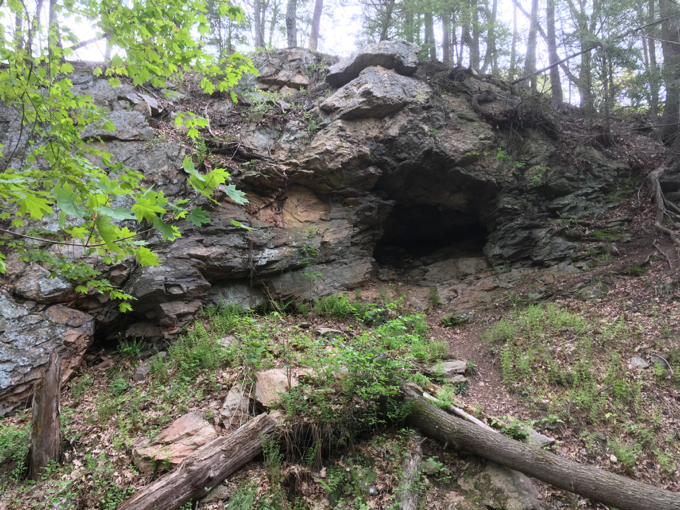 That was cool… but then it got really cool. Seemingly out of nowhere… a ravine! A gorge! 20+ foot high rock faces along the river! 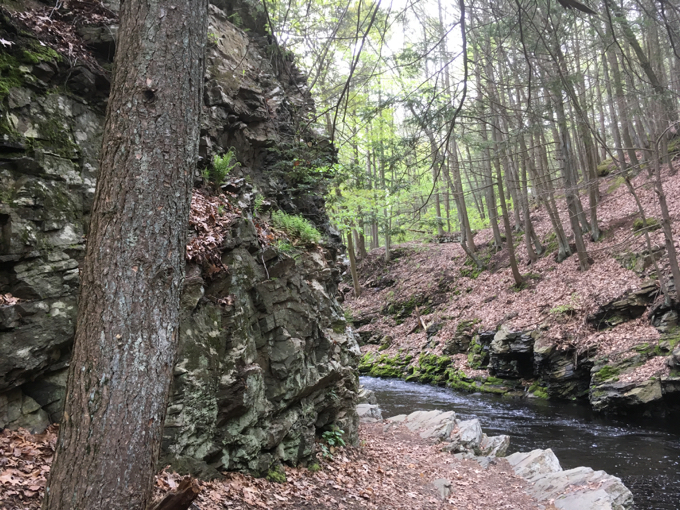 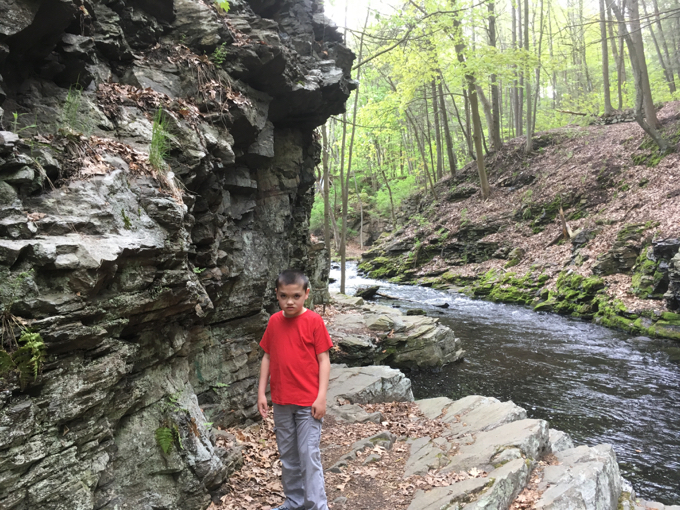 For those of you who don’t know, Damian is not the surest of foot. As the trail narrowed between the cliff and the river, I got a bit nervous for him. This is not something he enjoys, to say the least. 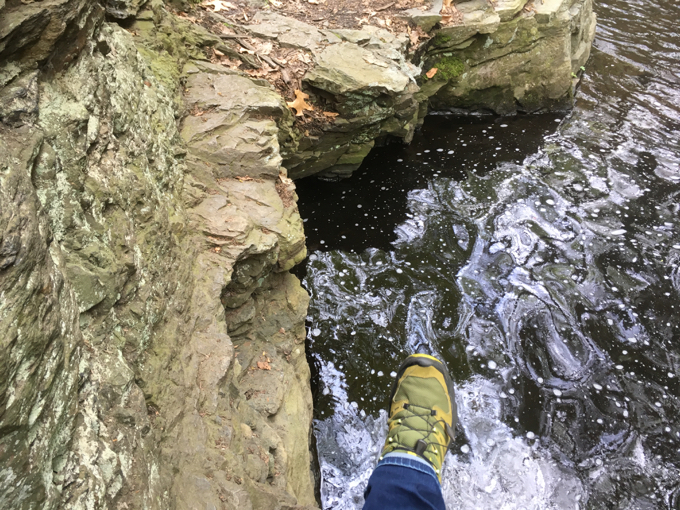 But he did great!

The trail more or less ends here – or at least it does for a disabled 11-yr-old, that’s for sure. I could have made the traverse, but obviously that wasn’t going to happen with Damian in tow. 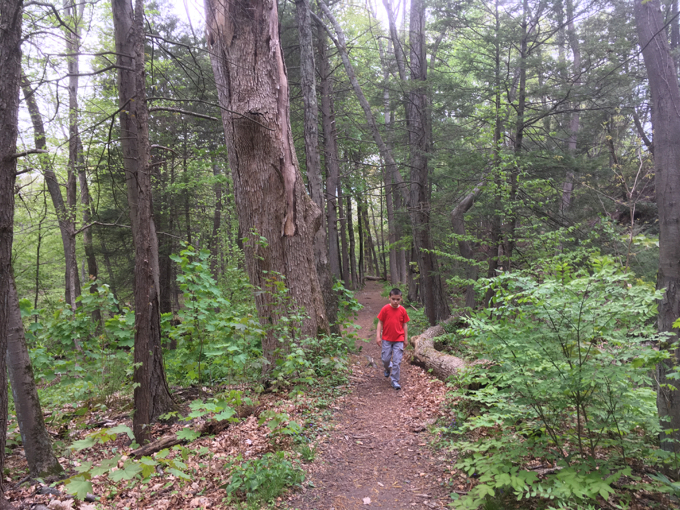 I’m still sort of marveling that this place exists where it does. The upper trail obviously skips this whole Class 4 free climbing experience. It takes hikers over the cliffs and then steeply down the other side to take in the dammed falls there. 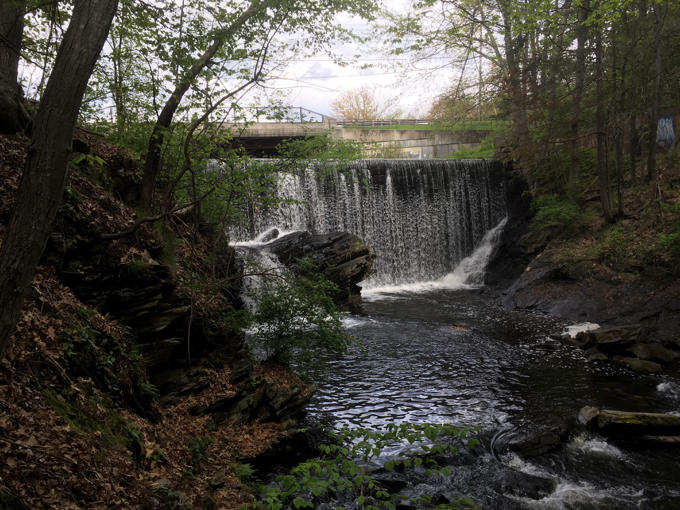 This is a remnant of the old mills (I assume) and across the river lies the crumbling ruins of Ackerly’s Mill. It’s a nice little area. You can access the falls directly by parking off of Dobson Road, but I don’t really recommend that as it requires you to sort of jump a curb with your car.

I wrote some more about the falls here. 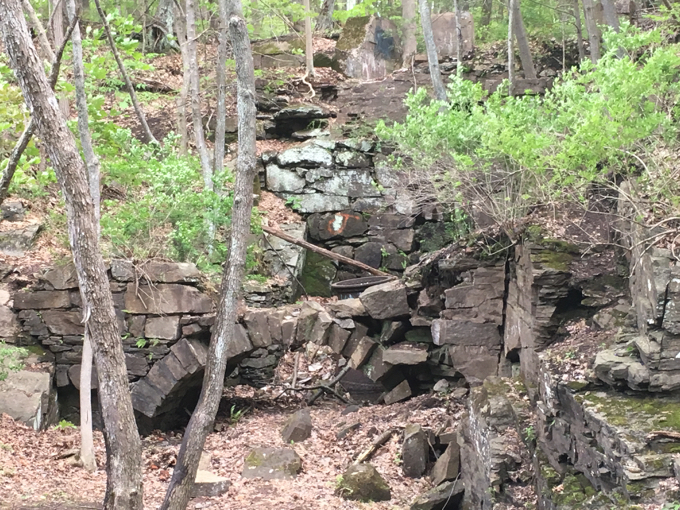 You actually hike a loop here. It requires a little road walk after the falls and then you return to your car via the rail trail and another road walk all the way up Main Street. Normally I’d say this is silly, but the historical import and signage along the last stretch through Talcottville make it worthwhile.