There are very few pages out of the (literally!) thousands here on CTMQ where I don’t actually do the thing I’m writing about. This is one of those rare pages and I’m not even a little bit sore about it. 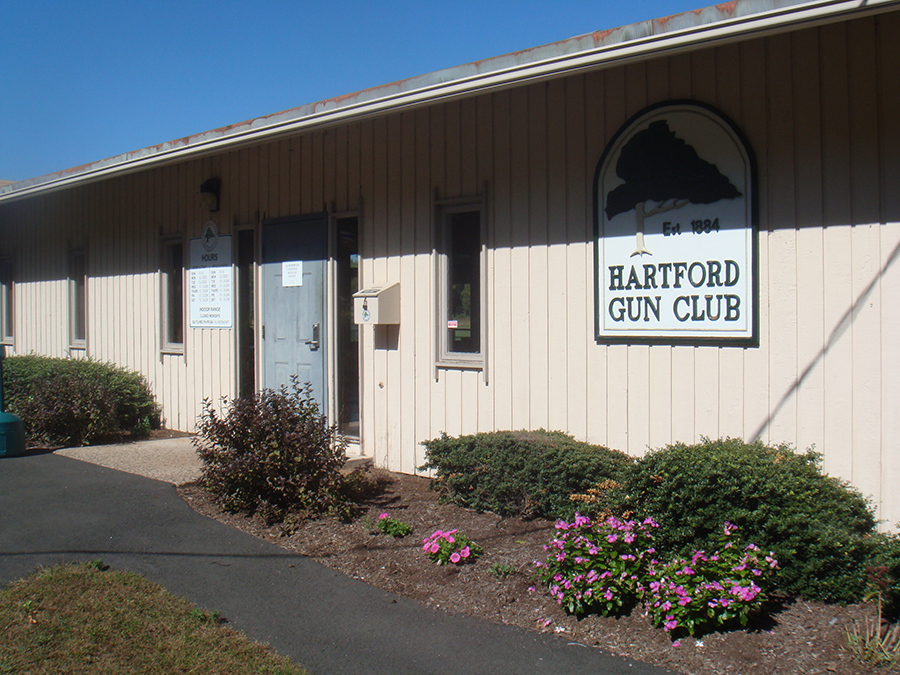 Okay, maybe I am a little. I’ve mulled over finding a way to check out the guts of the operation at the Hartford Gun Club for a few years. Did I want to go full bore (gun reference!) and find a friend who is a member and maybe even shoot some stuff? No, as I don’t have any licensing to shoot anything.

Did I want to simply reach out and say, “hey guys, I have no interest in shooting guns but I am very interested in your impressive history, so can I get a tour or something?” I was going to do this but then decided that a quick drive into their property in addition to their website was good enough for me. And surely it’s good enough for you.

Or so I’m telling myself. Because I’m just not into guns. At all. Now let me be clear: Hunting is fine. It doesn’t seem fun to me, but I’ve no issue at all with it, as long as we’re talking real hunting with skill like for meat or culling herds or whatever. I’ve been a proponent of killing as many white tailed deer as safely possible in Connecticut. Go for it. 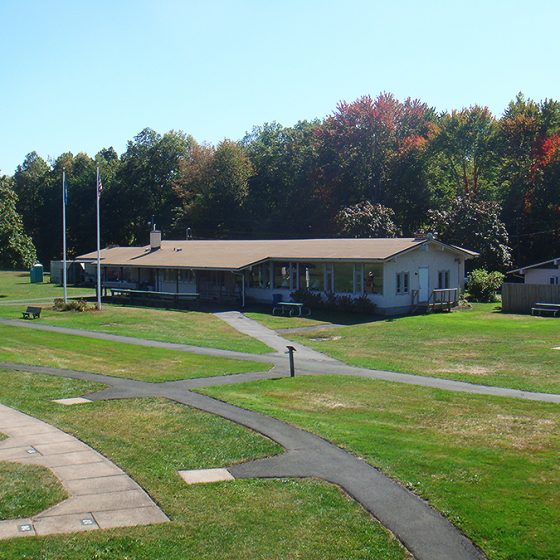 Unfortunately in America, guns are used to hunt humans far too often. I’m very much against hunting humans. I have no idea why so many people feel the need to have arsenals in their homes and the “real ‘Mericans” who open carry compensatory guns on their hips to go shopping at WalMart make my brain melt.

But the Hartford Gun Club is a celebration of sport shooting. And that’s fine. I highlight lots of hobbies and collections and things which I’m not remotely interested on CTMQ all the time. This is merely another one.

I’ve driven by the club many dozens of times and am always made happy that they tout their historic bona fides out on route 187 proudly. And they should be proud; not only are they the oldest private gun club in America, they were founded by the famous Colt family! 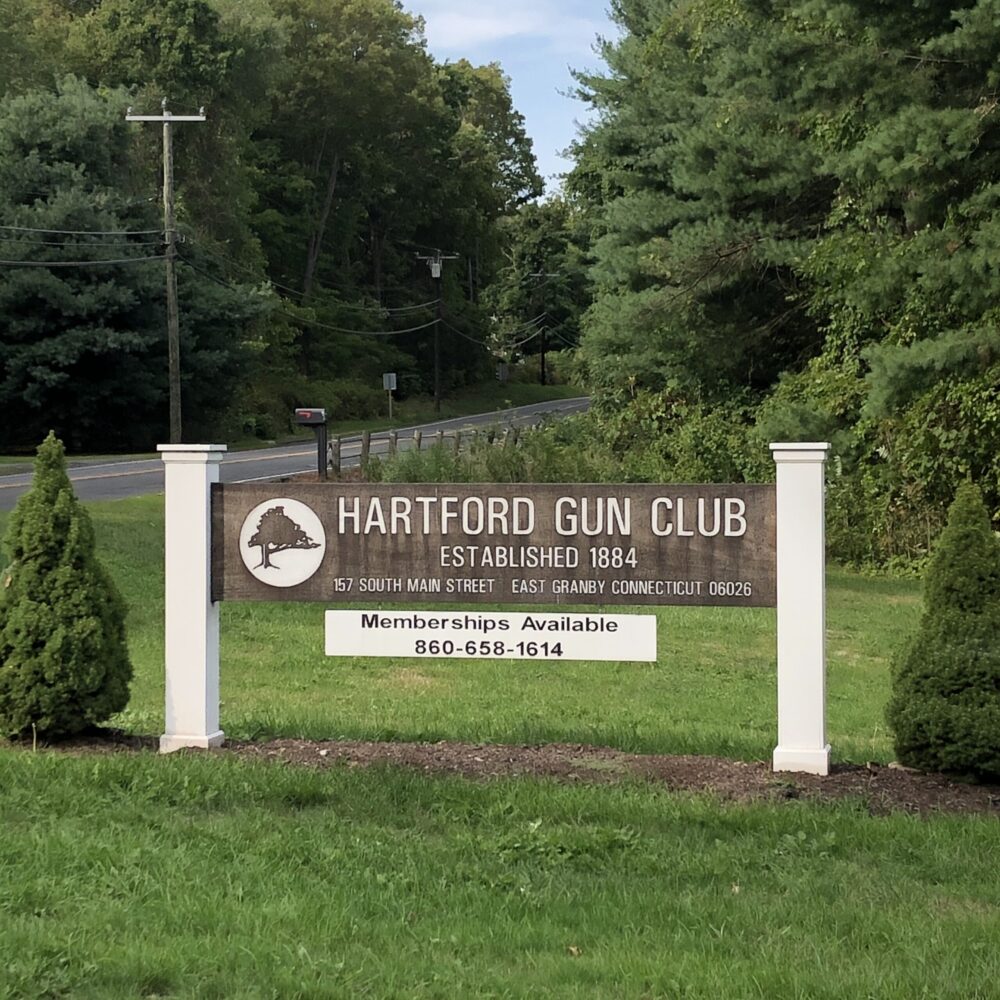 Yup, originally created by the Hartford-area gun manufacturing Colts, the club was known first as the Hartford Rifle Club. After a short stint in Hartford, they moved to Farmington and, ironically, changed their name to the present day Hartford Gun Club. They lasted there until 1971 when the imperialistic state eminently domained a GUN CLUB to build what is now the UConn Medical Center.

I wonder if they were mad about that. They wound up in East Granby where they remain today. But let’s back up again, because as with all of these “oldest in America” claims, the details are in the semantics. The Hartford Gun Club is the home of the Hartford Rifle Club (founded in 1864) and is the descendant of Samuel Colt’s Hammerless Pistol Club. I guess “Hammerless Pistol Club” wouldn’t draw too many fans these days. 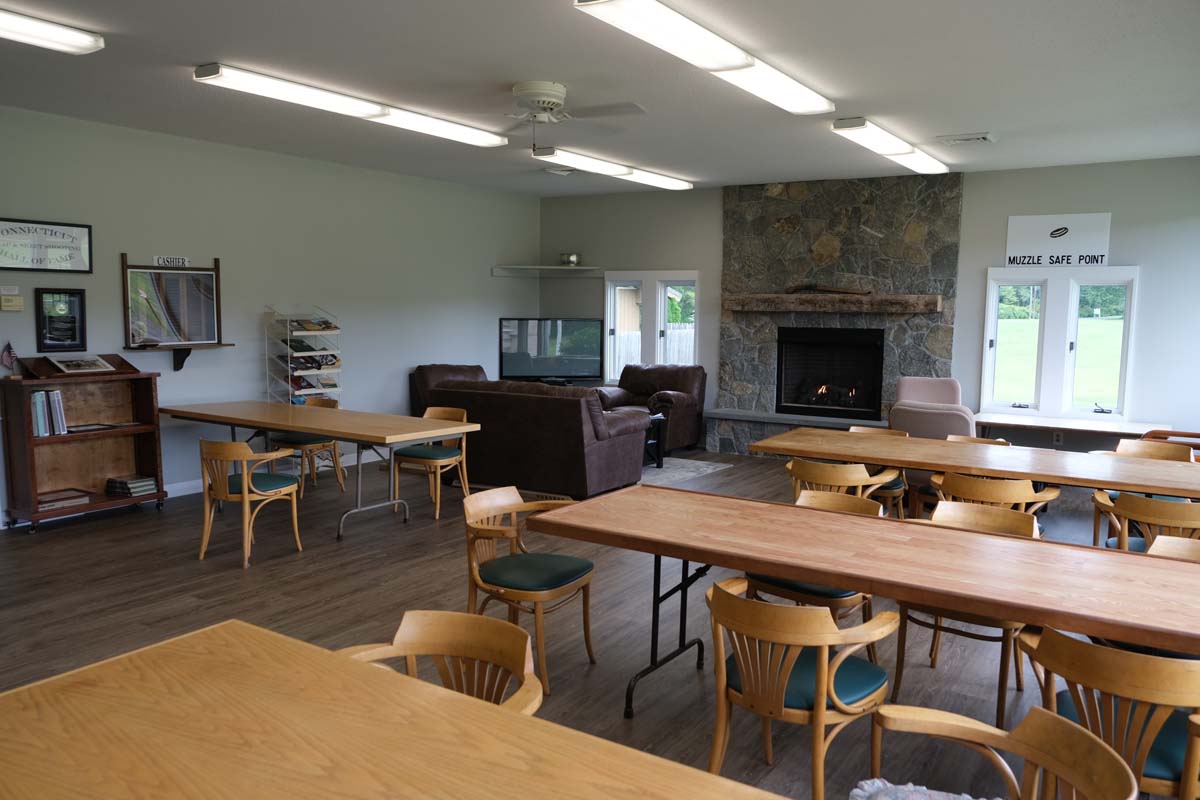 “FITASC,” you ASC? Me too. And I wonder how many Club members know that this is the Fédération Internationale de Tir aux Armes Sportives de Chasse? I think it’s pretty cool that it retains its French aristocracy roots. That’s the International Federation of Hunting Sports Arms when literally translated. Which sounds pretty awkward. 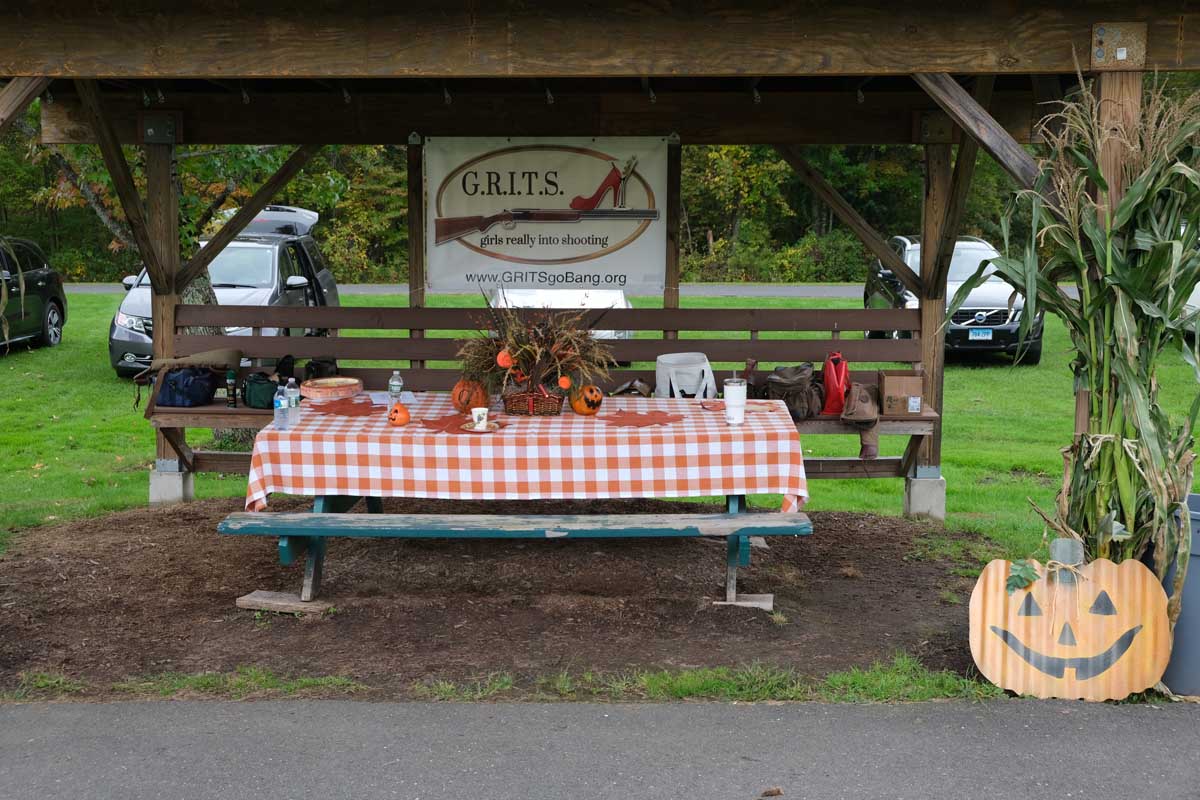 But it reminds me of giggling in 7th grade French class upon learning that an arm – the body part, not the gun – is un bras. Ah, oui, nothing quite like the unbridled joy of a 7th grade boy thinking about bras.

But we’re here for guns, not women’s undergarments. If you’re interested in this place and don’t know anything like me, the Club will take care of you and hook you up with certified instructors to provide instruction. For those of you who know how to shoot stuff and have all of your proper licenses… 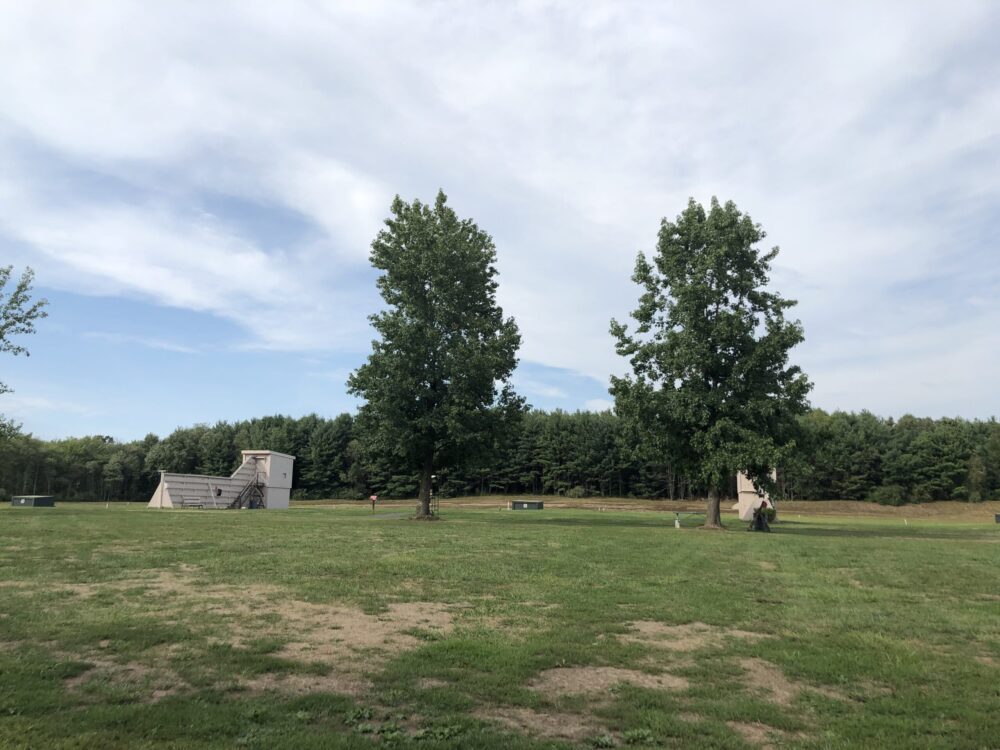 Man, not only are they open year-round, but open to midnight as well? Their neighbors must be so happy about that. To be fair, when the club moved to East Granby, there were no neighbors. Since then, the town has been growing and adding housing, including this neighborhood right behind the range: 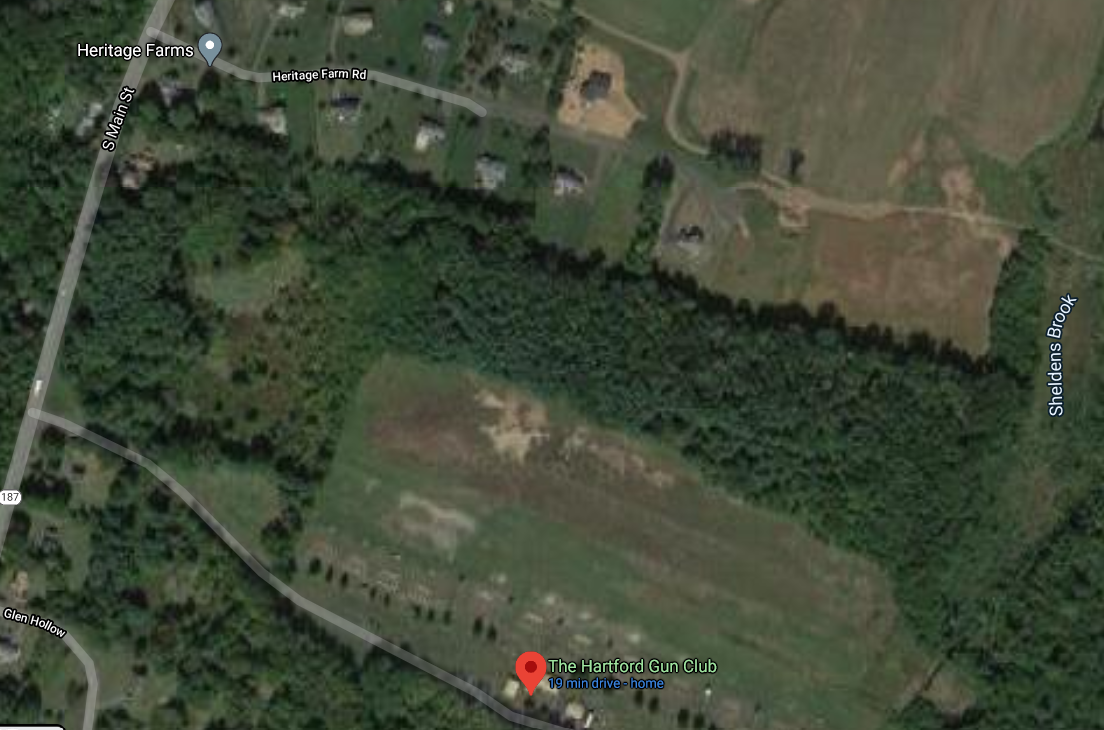 It would really be something if these people complain about the noise. (They’re also right below the landing path for Bradley International Airport which is less than a mile away. My word, that’s a tough sell.) I can report that you can hear the reports (I did it again!) for miles. But hey, they’ve been shooting stuff here since 1971 and planes have been landing at Bradley for far longer – and none of these houses were here 30 years ago. (And it’s only the indoor range open to midnight.)

The Club is very keen to highlight their safety measures on their website which I appreciate. They are also self-aware regarding some of the public’s perception of gun culture. 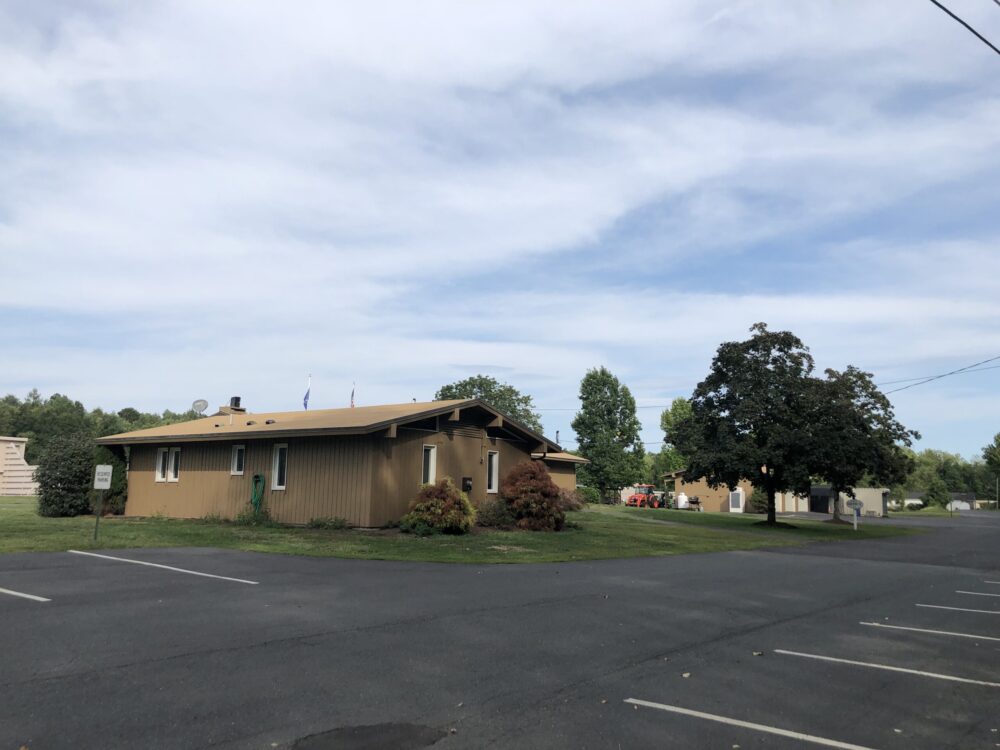 “We want people to understand that we’re not hooligans. It’s not what you see on TV,” said club president Regis Koontz. “Our goal here is to bring people in to see what sport shooting is all about, and contribute to public safety.”

The rich history of gun inventions and gun manufacturing in Connecticut is important and speaks volumes about our state’s ingenuity and precision parts prowess. Guns contributed greatly to Connecticut’s early successes and no one can ignore that. But I also can’t ignore Sandy Hook. Y’know? How’s this: I hate guns and the NRA and gun violence but I respect the Hartford Gun Club and the skill and discipline of sport shooting as well as the history of gun invention and manufacturing in Connecticut.

Bang up job, this.

A few pictures above are from The Hartford Gun Club. 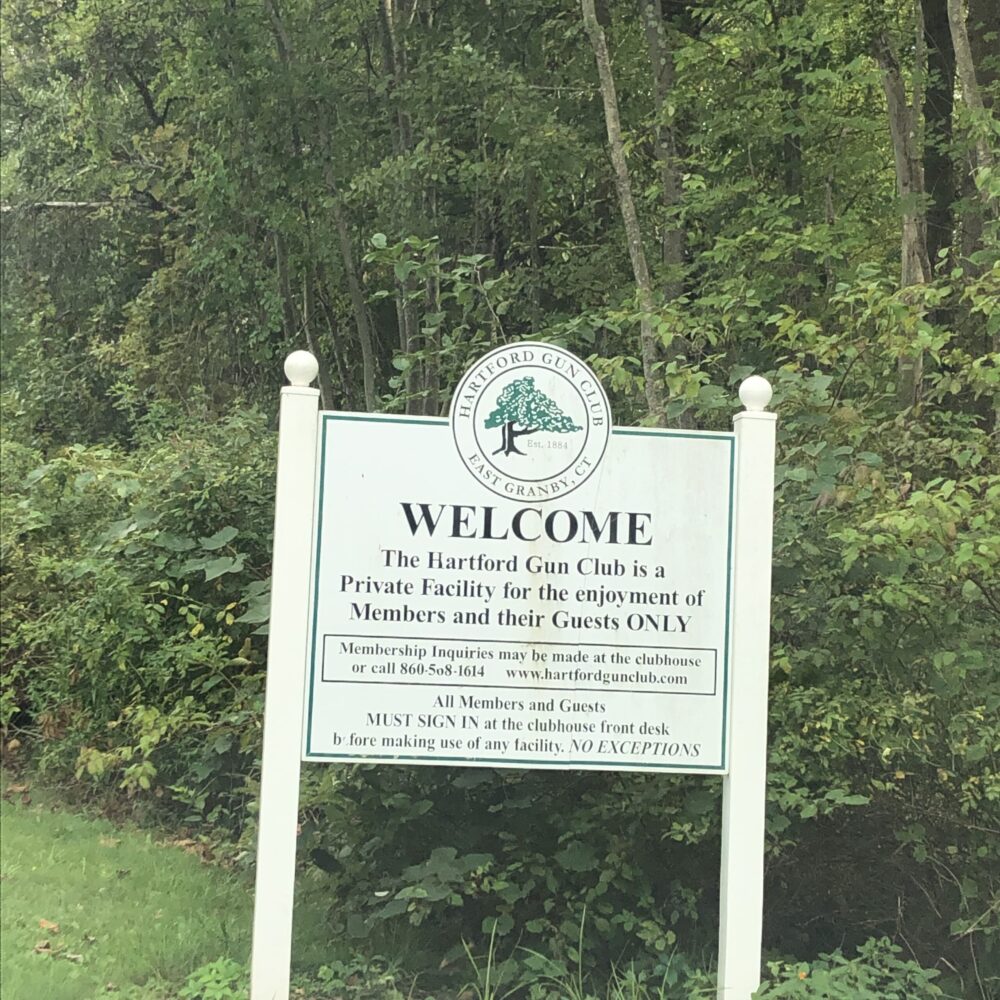