This is the ASME Landmark that really got me interested in this little list of eight nine rather random engineering achievements in Connecticut. Two reasons: One, Jacobs Manufacturing is only a few minutes from my office and two, I’d read a bit about the company in the heartbreaking book, Smoke, Fire and Angels. Long, depressing story short: The dump truck that killed six people in horrific crash at the bottom of Avon Mountain (right near my house) was not equipped with a Jake Brake. 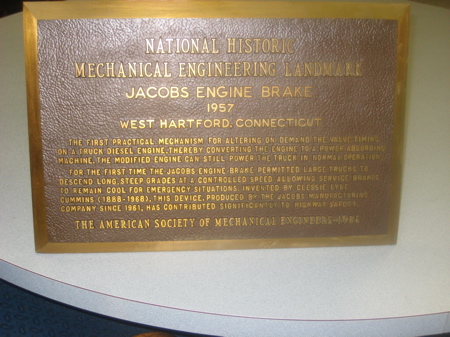 It looks like they used to be in West Hartford

“Okay,” you say, “I’m sure many trucks aren’t.” True, but get this: The Jacobs employee parking lot abuts the trucking company parking lot from which the deadly brakeless truck came. Adding sad irony to that is that one of the six killed that day was a Jacobs employee. That’s just (really sad) craziness.

Now you may be asking why this matters – well, the so-called Jake Brake could very well have saved those lives that horrific day. It works by slowing those big trucks down on downhills by retarding the whole piston/combustion process. You know when you hear a truck making rather loud, staccato noises that sound like it’s falling apart? That’s actually the Jake Brake. (And its loudness is why you’ll sometimes see “NO JAKE BRAKE” signs; this is for local noise ordinances. Large trucks can remain at a stable speed using the Jake Brake and not even touching their brakes. Yup, and this thing was perfected here – and is still manufactured here – in Bloomfield, CT.

I wrote an email asking the anonymous emailbox if they knew about their ASME award and the next thing I knew, I was invited to go see it myself! I happened to have my camera so after work I stopped by and was treated to a mini-tour of Jacobs by a very pleasant man named Paul. Heck, he even held up the plaque for my picture – AND didn’t really make fun of me for wanting to see it (to my face anyway). 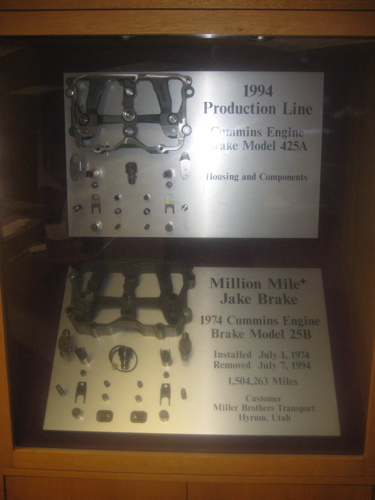 Paul explained how they will re-do their lobby and give the award a bit more prominence. He also said that they have the original Cummins Engine (or something) in storage equipped with the Jake Brake. You really should read the first few pages of the pdf below – the story of how this relatively simple thing works (turning the diesel engine into an retarder) is pretty cool, but the story of how Cummins (still an important name in engine stuff) came to invent the Jake Brake is fascinating. Seriously.

More about . . .
The Jake Brake permits large trucks to descend long, steep grades at a controlled speed. It was the first practical mechanism for altering on demand the valve timing on a truck diesel engine, thereby converting the engine to a power absorbing machine. The modified engine can continue to power the truck in normal operation, allowing service brakes to remain cool for emergency situations. Invented by Clessie Lyle Cummins (1886-1968), this device (produced by the Jacobs manufacturing company since 1961) has contributed significantly to highway safety. 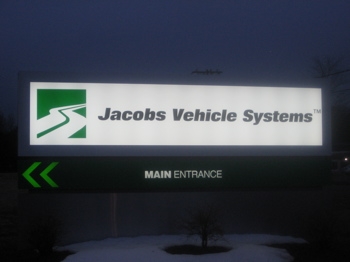