This is interesting. This little colonial shop sticks out like a sore thumb here at the confluence of a bunch of busy streets in Middletown. And aside from Wesleyan University, it seems to be the most widely known of all the Heritage Trail sites – or at least what was produced here is. 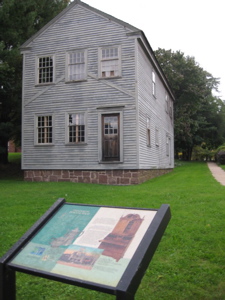 I can’t really find anything online about this actual building, except for some long-winded town records stating that they won’t knock it down for new apartments. But there is a TON out there about Danforth pewter. Members of the Danforth family were involved in the production of pewter and Britannia metal from the 1730s to the 1840s. Nineteen individuals from five generations of the family were pewterers and/or metalsmiths in some capacity.

That is merely one brief paragraph from just one website dedicated to the rich Danforth family pewtering past. Read about Danforth pewter til your eyes bleed. What’s funny is that in all that, they say that the family stopped producing one hundred years ago.

While Thomas Danforth II was among the finest Revolutionary era pewtersmiths in New England, the family tradition continues TODAY in Vermont. The Danforth Company is still going strong and produces all of your pewter needs. 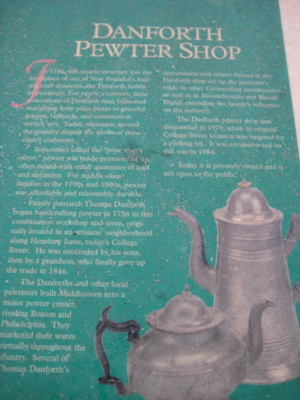 Pewter is a funny word when you say it several times out loud. Go ahead, try it. If curious, pewter is a metal alloy, traditionally between 85 and 99 percent tin, with the remainder consisting of copper and antimony, acting as hardeners. An example of how the Danforths ARE pewter, when googling just the word “pewter,” they are the second hit after the Wiki page.

Back to Thomas Danforth… He began handcrafting pewter in 1756 in this combination workshop and store, originally located in an artisan’s neighborhood along College Street. Middletown rivaled Boston and Philadelphia in pewter production back then. Even so, the town dismantled it in 1979 in favor of a parking lot. Five years later it was reconstructed here (which is why it looks so out of place I guess) and is privately owned and not open to the public.

No matter, you can get your fill of Danforth pewter at museums all around the country.