For friends and long-time readers, it will come as no surprise to read that I-Love I-Park. I have always been drawn to outdoor sculpture/art parks the world over. Andy Goldsworthy is one of my favorite artists and Storm King in the Hudson Valley is a place I always recommend to people exploring the region in and around Connecticut. I love the freedom of space, the temporal nature of… well… nature. And I love large scale pieces. I-Park in East Haddam, just north of Devil’s Hopyard State Park, has all of this. 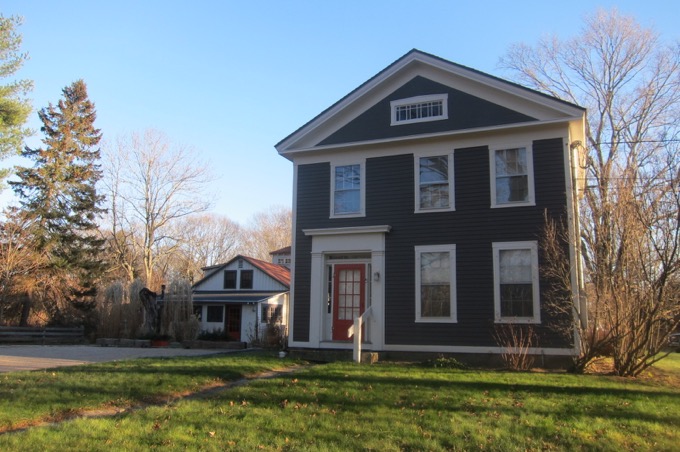 If I had the time, I’d revisit I-Park annually. Because it offers a different experience every year. If not two times per year. I guess if you’re not familiar with I-Park, you are probably wondering what it is.

I-Park is both an open-air and a closed-studio laboratory for individual creative pursuits in the fields of music composition/sound art, the visual arts, architecture, moving image, creative writing and landscape/garden/ecological design. 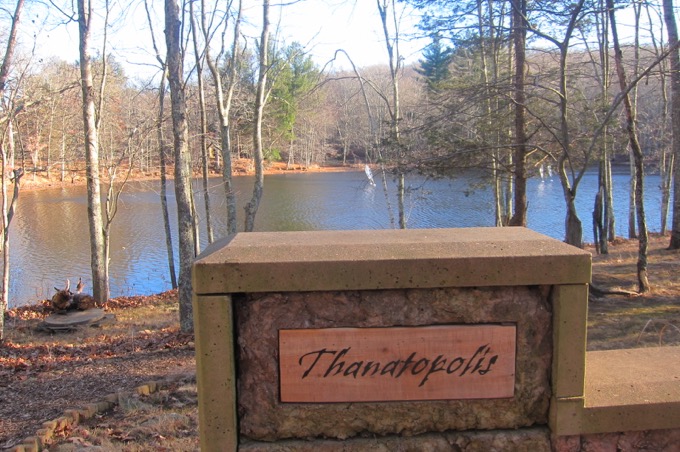 Well there you go. If you asked me, I’d say, “It’s this place in the woods in East Haddam that brings in artists to live there for a little while to create various forms of art for the public to enjoy.” I tend to distill and simply high-minded artsy explanations of things, and –

From insights developed in the laboratory setting, it also develops and sponsors specially-themed cross-disciplinary projects of cultural significance – and brings these discoveries to light in the public domain.

I-Park supports these individual and collaborative investigations through its international artists-in-residence program, the aesthetic engagement of its natural and built environments and with on-site exhibitions, performances and collegial exchanges. 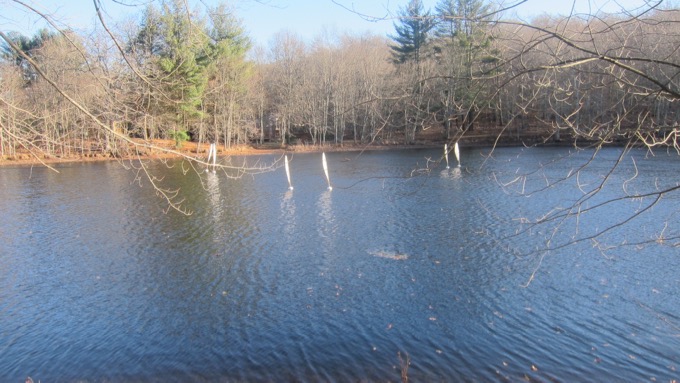 Every year, I-Park sends the call out for artists in a panoply of disciplines to submit for an artist-in-resident position. From music/sound art to creative writing to electronic/new media to architectural/landscape design, I-Park sponsors six different artists every month from May to December to come and live in one of their little cottages for a few months to… do what they do. The groups of six hang out and have a “deeply shared experience,” to use I-Park’s vernacular. Residents are given a private bedroom in a renovated 1840s farmhouse, a private studio, and chef-prepared dinners four nights a week. This seems like a pretty good gig. 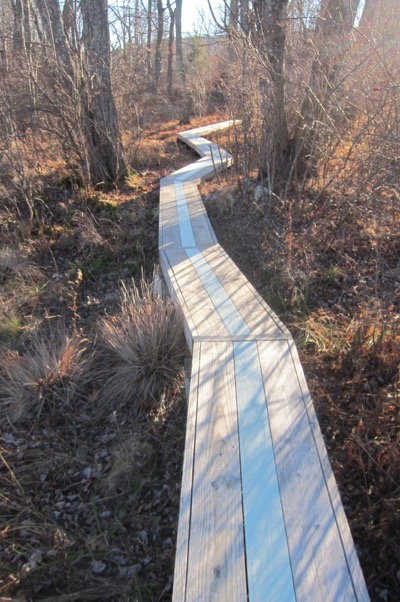 But it gets better!

Shared amenities include a communal kitchen, common area, library, wireless internet, and a workshop outfitted with tools, materials, equipment and an electric kiln. The music studios are equipped with pianos, digital keyboards, hardware for recording, sequencing and sound manipulation, and a collection of percussion and obscure instruments. The residency is self-directed and non-judgmental. You decide what you’re going to work on and when. I-Park’s resourceful staff is devoted to providing each artist with a fulfilling, productive and comfortable residency experience. We welcome ambitious installation projects on the I-Park grounds, and will furnish materials, equipment and labor for approved projects. 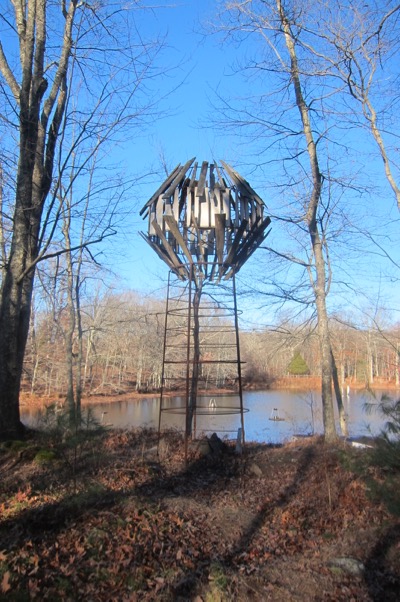 Man, that is an awesome way to spend a month. I would totally do that if life allowed it. Just go chill in my private bedroom and putz around online all day, writing the same amount that I do now. Rad. Anyway, each residency concludes with an Open Studios event, in which members of the public are invited to meet the artists, experience their work and explore the I-Park grounds. And that’s exactly what I did on a bone-chilling late November day. 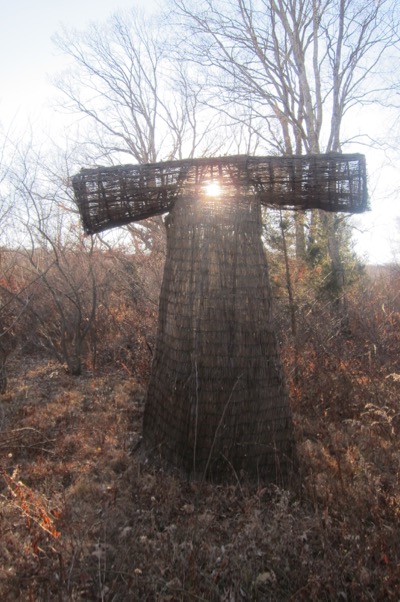 It was really cool that I wasn’t alone either. Several dozen others braved the weather with me – and here, that means actually walking around the grounds fully experiencing it. Let’s get to it. 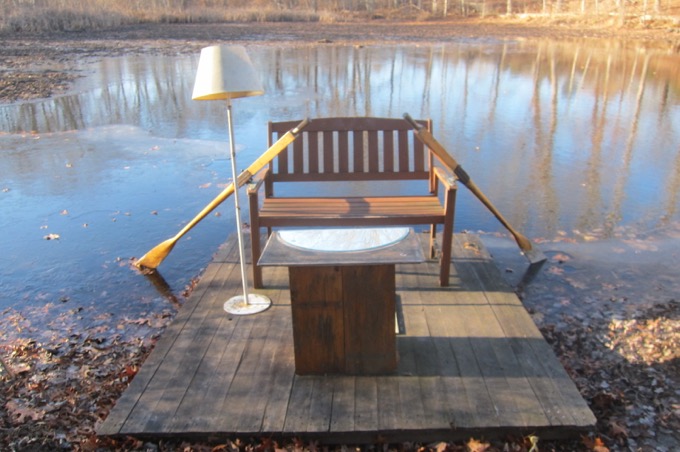 It’s hard to sort out the installations here, simply because when you visit, there are the new ones by the most recent residents and then there are the ones that are still there from previous residences. Some installations are more ephemeral than others. Some are meant to slowly sink back into the natural environment over a longer period of time. Some are immediately removed. And that, to me, is the beauty of this place.

One “installation” that has survived since 2002 is Mie’s Trail. The trail takes walkers through the woods and around – and into – an abandoned gravel pit. The idea here is simply to expose people to a basic ecology lesson: forest succession. 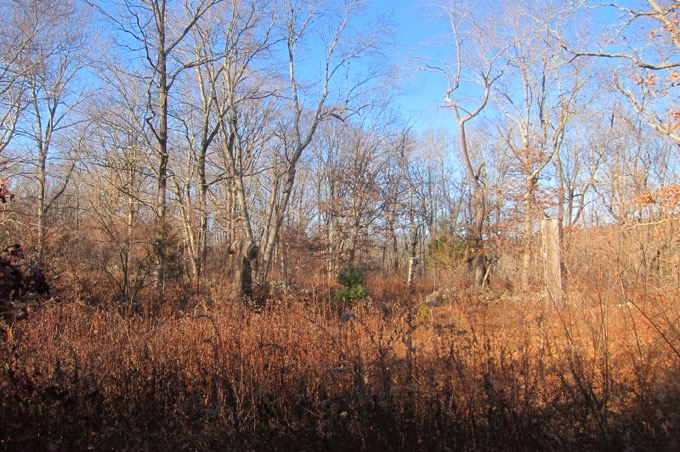 Through Mie’s gentle editing, a series of ‘gardens’ have emerged from the underbrush and detritus of nature’s steady cycles. Mie has returned to I-Park each year since to maintain and refine the piece. In 2009, the scale of the project was significantly expanded when the gravel pit proper was joined to Mie’s Trail to form the Gravel Pit Preserve, a space now dedicated to environmental preservation and observation. The rerouted trail traverses the gravel pit itself and gives the walker a more up-close and immediate exposure to nature’s regenerative forces at work. 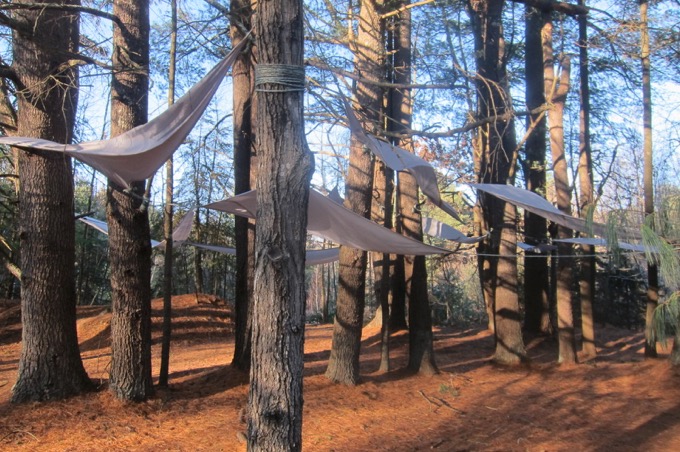 She cleared a trail in woods that used to be quarried. Sure, I’ve seen the same a million times, but I’ll give her credit for keeping up with it for nearly two decades and for making it a “thing” at I-Park. There are trail maps provided and everything. 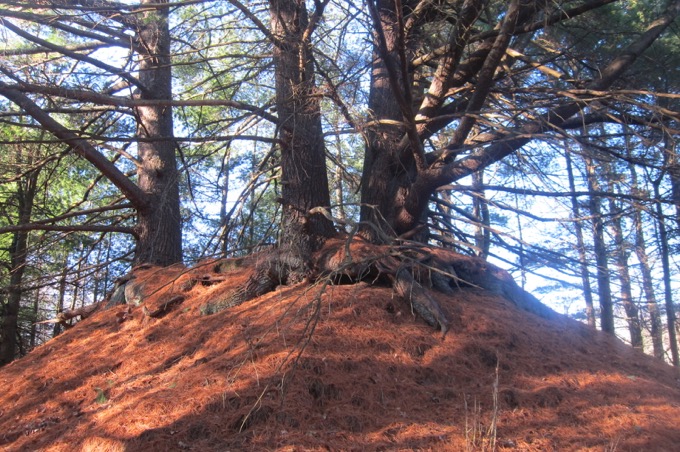 Again, this is a bit confusing because Mie’s Trail, which is an installation here, is dotted along the way with other installations – most of them are situated close to the outbuildings though. Art. Whattareyougonnado?

I’ll tell you whatI’mgonnado… I’m gonna check this place out. And I’ll start with what was, I think, my favorite installation. 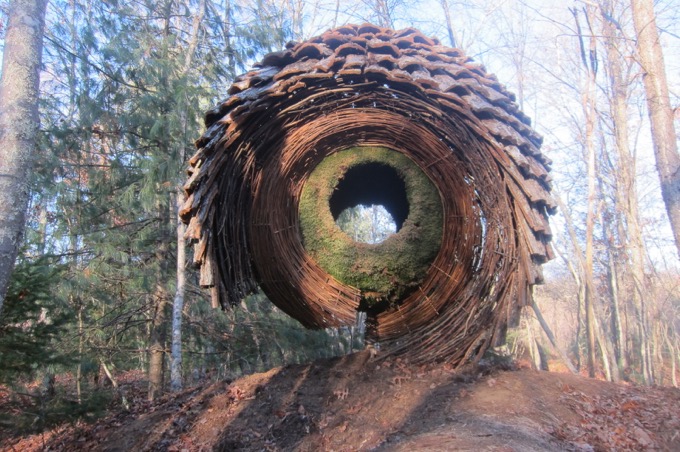 It was called The Journey and the artist was Tim Norris from the UK. Tim used reclaimed reinforcement bar that he salvaged on the I-Park grounds. (This place used to house an architectural salvage yard apparently.) Red oak bark was used as armature and the living soft moss bed inside seemed to offer protection and shelter. 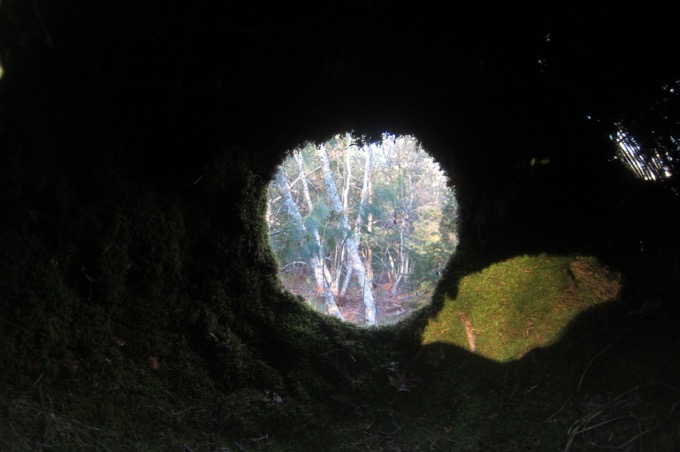 I-Park noted that Mr. Norris’s sculptures “aim to encourage a sense of interaction: either by sitting within, clambering over, or wandering through and inside.” I just think this thing is so cool. I love it. I also love my “second favorite” installation just as much.

It was called The Constant by Adam Frelin and on the surface, it’s not all that exciting. But this very large format photograph was a weatherproof print in a Connecticut winter-proof frame. 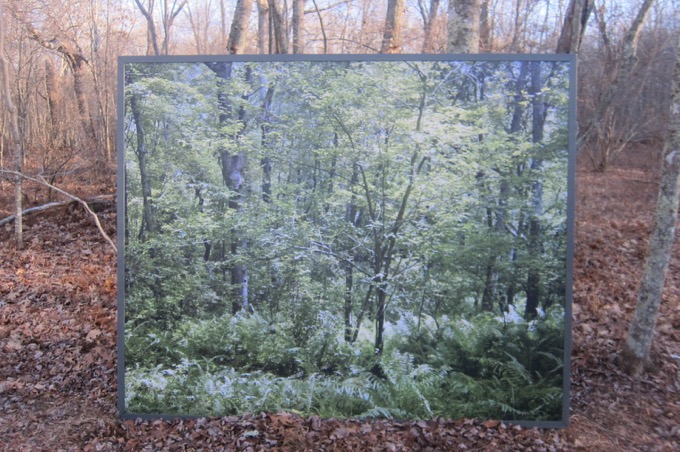 The photo itself is indeed from I-Park, but not exactly where it was set. Says Frelin, “the image aims to respond to the entirety of the forest as opposed to a specific spot. Leaning against a tree, its display is meant to feel provisional, as if it could easily be moved and yet its relation to its surroundings would remain the same. As the season’s change, how the image relates to the landscape will vary from being similar in appearance (in summer) to dramatically different (in winter). Within this setting, this photograph will act as a constant, drawing attention away from itself and toward the change that surrounds it.”

Like, check out how cool it looks in the winter: 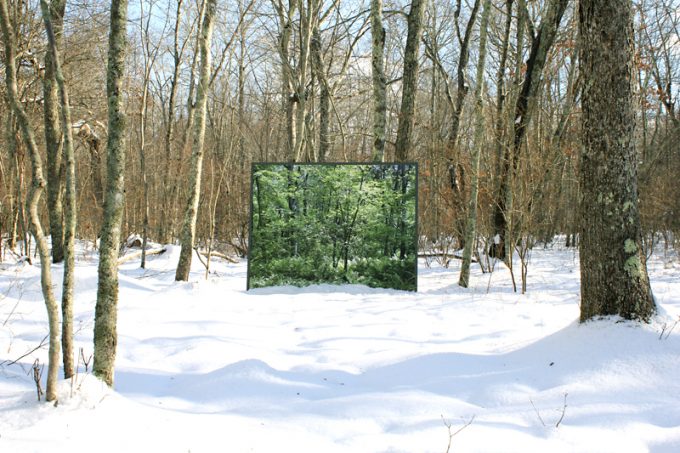 Don’t worry, I’m not going to explain each and every piece I saw… and while I didn’t love them all, I did find it quite fun to walk down the trail not having any idea what would confront me around the next corner.

Let’s check out Tatiana Ferahian’s Clytia. It’s a bunch of sunglass frames suspended in the air with invisible nylon threading. The work pays tribute to Clytia — the nymph born to Oceanus and Tethys in Greek mythology, who fell deeply in love with the Son-god but the feeling was never reciprocated. She thus became so fixated on him that she transformed into a sunflower that would always follow the path of the sun. (“Son-god” was in the artist’s own write-up and I honestly have no idea if it should be “Son” or “Sun.”) 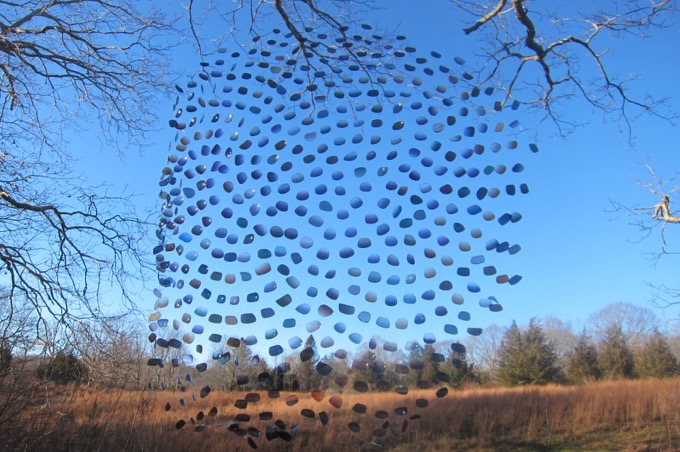 The frames are said to be in the “natural pattern of sunflower seeds,” whatever that means. The funny thing is that when I came upon the installation, I would have guessed that the idea was something to do with migrating birds or a swarm of bugs or something. But now we know it’s all about a Greek goddess I’ve never heard of. I learn a lot from art. 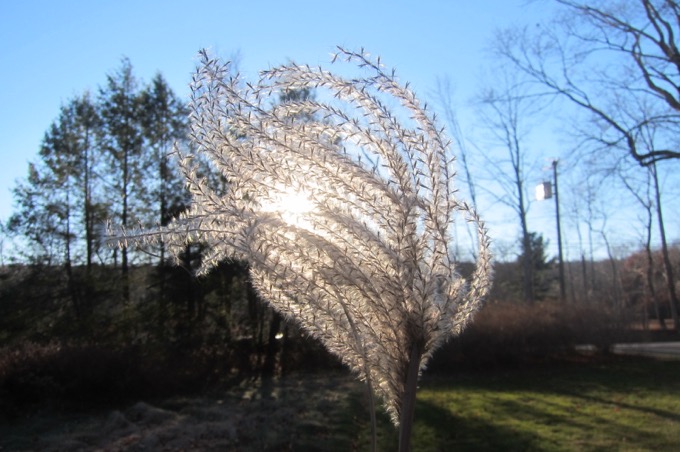 Nature itself is the most beautiful thing

Man, it was cold on my walk. I know I said that there were a bunch of people here, but only a few ventured very far to see all of the outdoor installations. I-Park has several indoor gathering spaces and they were heated. They even had hot chocolate and later I learned that the smart people were just hanging out there. As for me, I kept pushing forward, taking in giant baskets in trees that reminded me of birds’ nests: 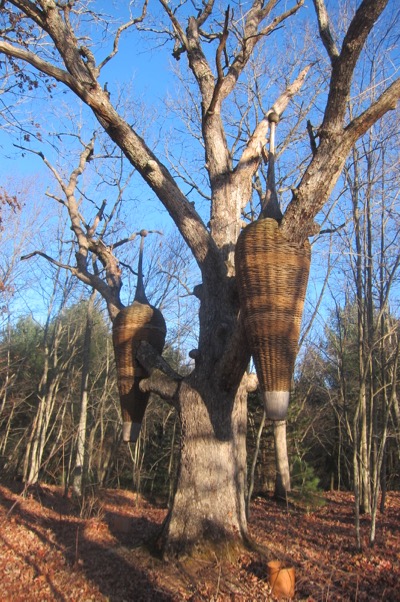 I rather enjoyed the sculpted mudskippers on the side of a tree – a tree of the same exact color. 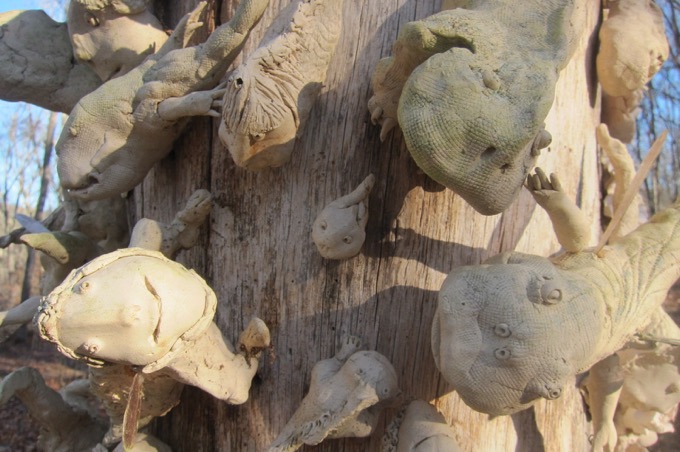 There are often sound installations here that are likely either fleeting or simply non-functional in single digit weather. There are floating installations on the lake and there are earthen installations that slowly erode over the years. But there are also “indoor” artists as well – like the writers I’ve mentioned. These men and women get to hang out in a cute little cabin and just do their thing. I got to check out the cabins and they were nice. All the buildings here are nice. 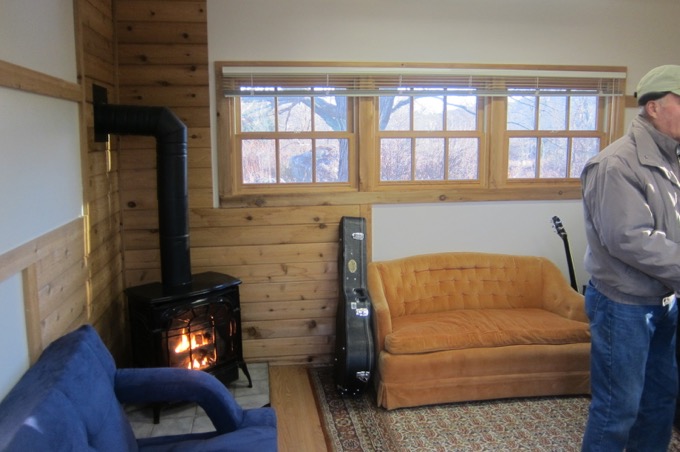 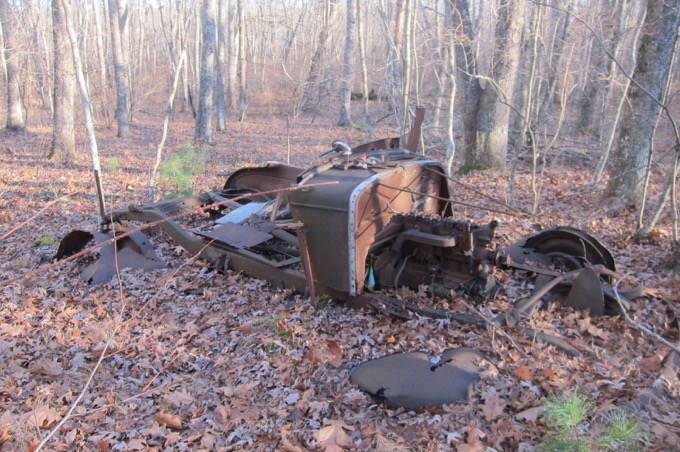 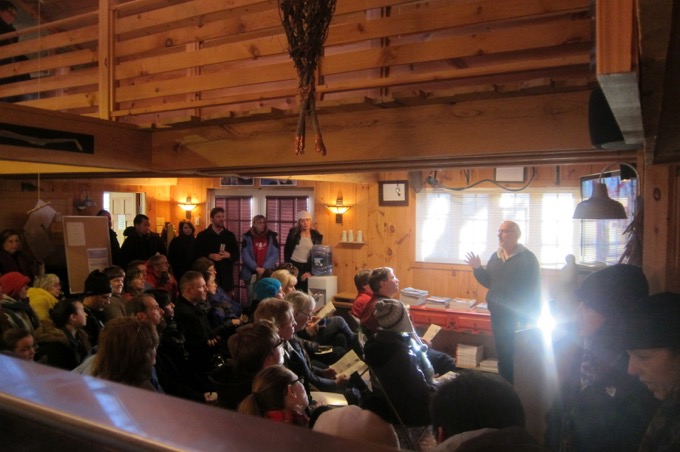 And the people were very nice too. I was given much credit for being one of – if not THE – only folks to walk the full grounds. Shout out to me.

The true beauty of I-Park, to me, is that if you visit the next open house after reading the page, it won’t be completely different, but will be very different. Each season, each year, it changes a bit. Every decade? Perhaps it will be 90% different from the decade before, but if you know where to look, you’ll perhaps find vestiges of what once was. I love the transient nature of that; it’s, well, it’s nature, right?

As the guy going to the 800 or so museums in Connecticut, I can’t really revisit many. I-Park is one of the very few that definitely will… and more than once. 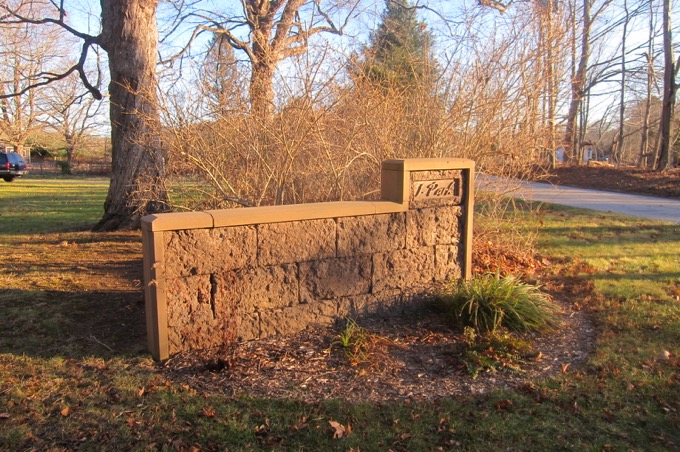