Richard Alsop IV House
National Historic Landmark
301 High St., Middletown (House is owned by Wesleyan and you can maybe check it out with a guide)

Funny – I’ve been inside this NHL and had no idea. You see, Wesleyan’s Davison Art Center is located inside this beautiful old house, and I visited that a while back. I knew the house contained some pretty darn cool and unique artwork and design… But I didn’t know it was NHL-worthy. And it took the WhoeverDecidesTheseThings people a good long while to do so – it was designated a U.S. National Historic Landmark on January 16, 2009. So recent! Exciting! 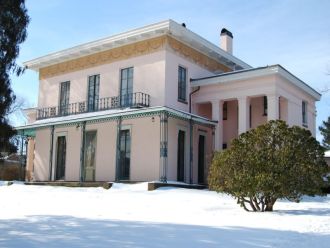 Clearly I didn’t write any of the below. Nor do I understand much of it. But hey, here you are…

The Richard Alsop IV House, also known as Alsop House, is a historic home in Middletown. This stately mansion faces east towards the Connecticut River from the west side of High Street opposite the intersection of Court Street. It is set back from the street atop a rise. A high iron fence borders the property along High Street. This house makes an important contribution to the elegance and high style which characterized High Street as the preferred residential area in nineteenth-century Middletown.

The Alsop house was built in 1838-1839 by Richard Alsop IV for his twice-widowed mother, Mrs. Maria (Alsop) Dana. The firm of Platt & Benne of New Haven was evidently responsible for the design, although it is possible that they drew their inspiration from Ithiel Town’s own home in New Haven, which may account for the similarities of the two structures as well as for a former attribution of the Alsop House to Town himself. The well-known Middletown builders, Barzllai Sage and Isaac W. Baldwin, performed the masonry and carpentry work, respectively. The house remained in the hands of Alsop family until its acquisition in 1948 by Wesleyan University.

This house is significant architecturally for its transitional Greek-Tuscan Italianate appearance. The cubical, two-story, central block with overhanging eaves is flanked by colonnaded one-and-a-half story wings. A awg and tassel design decorates the frieze of the central block, which also displays a veranda supported by delicate ironwork and surmounted by an intricate balustrade. 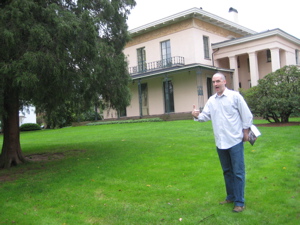 A rear colonnaded wing which originally housed servant’s quarters and service facility has been enclosed. At the west end of this wing are attached an art gallery of recent construction and the art library, originally the stable.

The interior of the Alsop house is noted for its decorative wall paintings. The stair hall displays trompe l’oeil painting of figures in niches, while the parlors, dining room and morning-room feature oil-on-plaster paintings. The parlor paintings are classically derived and some subjects are Raphaelesque in origin. In the morning room the formal classicism of the parlors is replaced by scenes derived from the “rural” Italian tradition of wall decoration. Local birds and insects are featured in these scenes. The dining room displays a painted frieze.

The main rooms of the house are furnished with period antiques and provide a suitable atmosphere in which to display the wall painting.