Some readers are probably aware of my dislike for Connecticut’s town fairs. I can report that my dislike has morphed into more curiosity than anything. Like, why do people love these things? Is it anything more than bumping into local friends? What is the real allure? 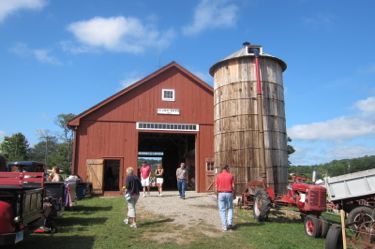 For me, the allure of these things is simple: Rarely open museums. Several town fairs have them from Orange to Durham to Berlin to yes, Woodstock. And really, since I now have two little boys and a wife who happens to love fried fair food, there’s no reason not to go and have a good time.

Woodstock’s is one of Connecticut’s older fairs and 2012 was the 152nd year of the fair. That’s a lot of fairs over a lot of years. 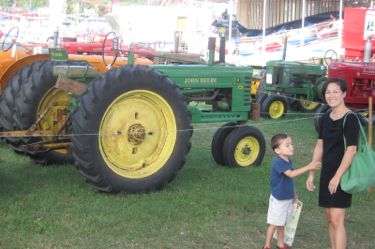 I’ve just read up on the history of the fair and enjoyed something from the first official fair year of of 1859:

…that first year that the pens for the livestock were made of rails and slabs tied together with old discarded telegraph wire. Everyone was climbing to the top of the pens to see the cattle and began to stir them up with whatever they had in hand, be it a cane, umbrella or whip. You can imagine what happened as a result of this agitation of these hungry, tired animals. Two bulls charged the barricade and carried the pens that enclosed them along with the people on them. Excited spectators, men, women and children were all mixed up with cattle, horses, sheep and swine. Despite this episode the Fair was declared a success. 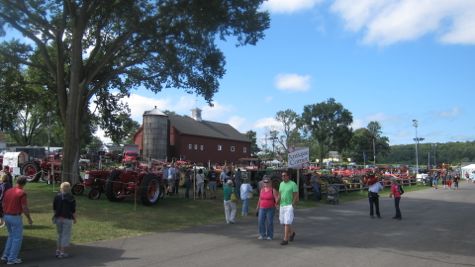 We poked around the typical fair stuff, all the while making our way back to the Brunn Barn Museum complex. As we neared, we began to appreciate the rather huge and impressive tractor collection.

Not just tractors, but old steam engines and such, row after row after row. As we approached Brunn Barn – and the museum proper, I was sidetracked by things like old chainsaws and old lawnmowers: 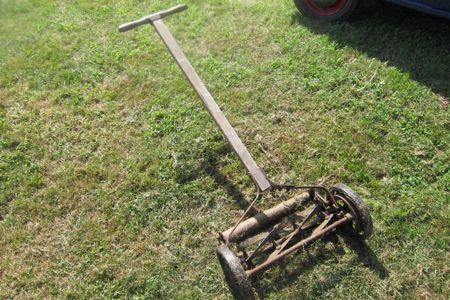 My favorite part of that thing is that by the looks of it, it had been recently used. Like, the guy cut the grass on the way over to its designated display area. Anyway, while Damian and Calvin enjoyed the loud splurting steam engines, I checked out the historic silo. 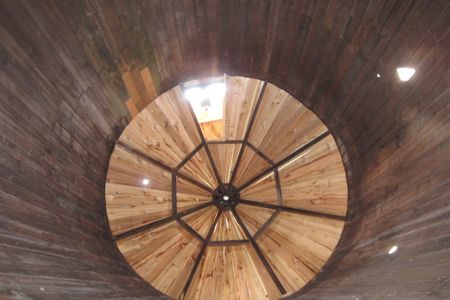 It’s pretty cool. There’s an old “ensilage cutter and blower” here that I believe was operational. Back in the day these machines were used to chop up the feed corn and spray it into the silos in a specific way so as to most efficiently store the corn to break down into mush to provide the most energy to feed the cows.

Ok, that doesn’t sound so cool, but the silo is all wood and I liked the Etsy-ness of it. Like, OMG, retro wooden silo! 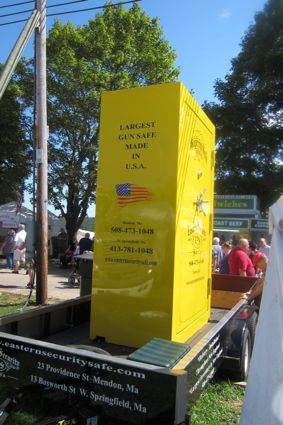 The barn/farm museum itself didn’t provide any surprises to this barn/farm museum veteran family. But it did feature some cool antique tools with fun purposes, like this cherry pitter below. Were cherries back in the day giant and impossible to remove pits from? Because really, this seems like an extreme piece of machinery for such a task. 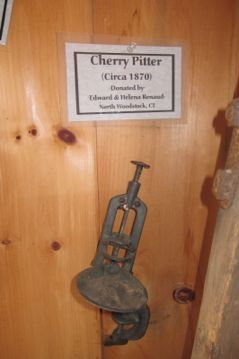 There were a few cows and goats in the barn, because there are always cows and goats in these barns. It was cute to watch Calvin bumble around them – especially in his “European” leather sandals (as Hoang calls them). As she was scrolling through these pictures today, she thought it was just wonderful that her two sons wore those things out in public for some reason. 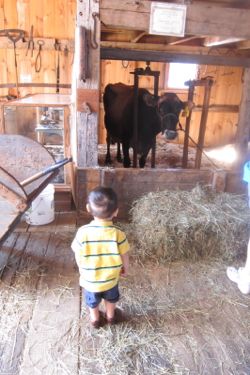 Here is some good info about the barn I’m ill-equipped to tell you myself:

The Brunn Barn Agricultural Museum opened its doors during the 2005 Woodstock Fair, culminating five years of planning by a committee that recognized a community need for a structure that could house agricultural artifacts indigenous to northeastern Connecticut. The committee decided to find or build a barn representative of barn that might have been constructed in Woodstock during the time period 1865 to 1950. The barn, which houses a collection of old machinery and equipment, was originally located about one half mile south of its present site on the fairgrounds. It at one time belonged to the Brunn family of New York who had a summer estate in Woodstock; the barn serving to house the livestock kept there. The barn was dismantled and reconstructed on the fairgrounds during the fall of 2004 and spring of 2005. Many of the items on display were donated by area residents. We hope that new material will be donated on a regular basis to provide fairgoers with new, fresh exhibits every year. In 2007 the Woodstock Fair Association received an Award of Merit from The Connecticut Trust for Historic Preservation for its work in preserving a barn of historic interest. 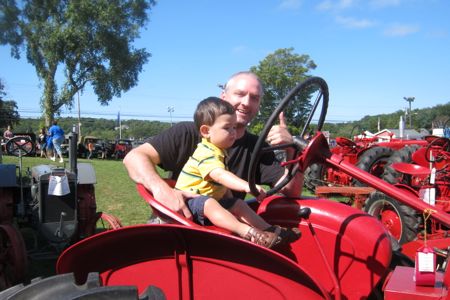 The barn museum held the “original” Woodstock Fair starter bell. It’s just an old bell that used to signal the start of various horse races and whatnot. I only mention this because some old Woodstock guys were discussing the bell underneath it with reverence. The fair used to really focus around these races, but obviously it has moved beyond that. 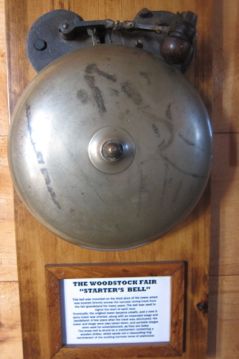 Up next were some lightning rods. How effective could these things be? 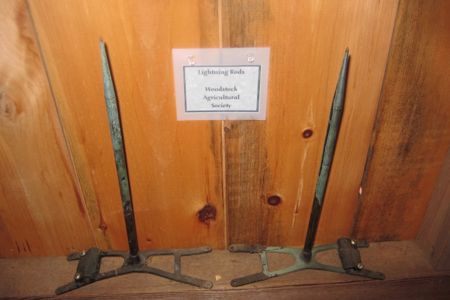 They seem pretty short to me. I don’t think I’d want them protecting me. Didn’t people back in the day think bigger was better?

I don’t know, but they did think that lard presses were important: 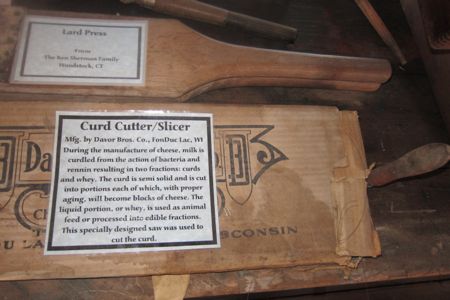 I always thought all fairs were the same. Now that I’ve been to a few, I still think they are all the same. But I also thought they all sort of competed with each other because in my ignorance, I thought other families went to other town fairs beyond their own. 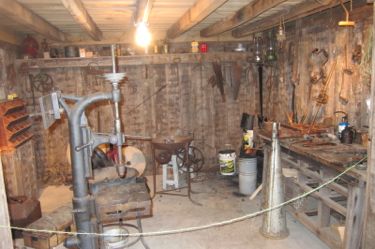 I’ve since learned that’s pretty much not the case at all. When we show up in Woodstock (!), it turns out that there aren’t many West Hartford people there. (But, I should mention, we did run into a family we knew there – from West Hartford.) 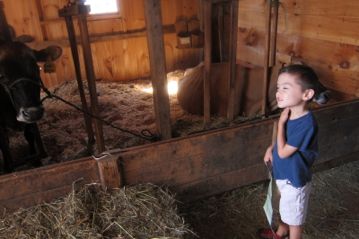 Anyway, my point is that I would have thought – had I ever bothered to think about it – that the fairs competed with each other. Now, I know they don’t feature the same main musical acts, which makes sense, but I now know they DO feature the same chick brooders. 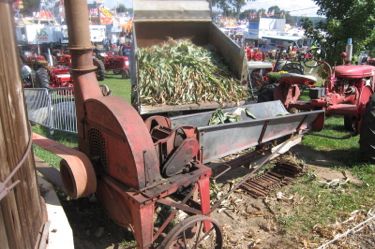 I know that I’ve always protected my brooding to get chicks way about me, but apparently the mighty Durham Fair donated/shared their chick brooder with the almost-as-mighty Woodstock Fair.

Here it is. The Durham Fair’s chick brooder donated to the Woodstock Fair. Why? I don’t know: 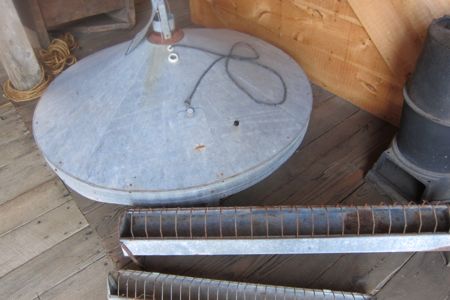 That was pretty much it for the main part of the barn museum. We went outside into the glorious early September sunshine and found ourselves amidst an incredibly impressive antique car show.

Hoang loves “cute” little roadsters, so the Triumph was, for her, quite a triumph. There was a quirkly little 1929 Worthington Tractor that was converted into a sort of woody wagon type thing. Despite the “Do Not Touch” sign, some random old guy was there encouraging Damian to climb on in. 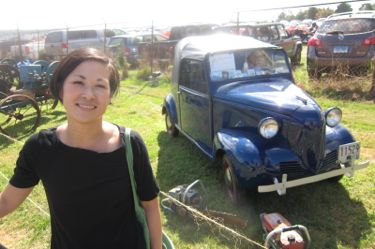 Unfortunately, Damian was being Damian and pretty much went through a quick SMS behavioral episode, hitting himself in the head and screaming “No!” over and over. The poor old guy was quite justifiably confused and I felt kind of bad but didn’t really have time to explain the situation. 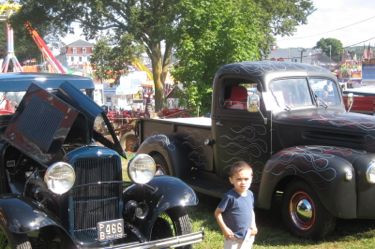 We made our way to the “under-barn” portion of the museum that not many others make the effort to do. Once there, I learned why. There’s really not all the much to it – a blacksmith forge circa 1860 “reputed” to have been used during the civil war, according to the sign.

While I appreciate any hedging when it comes to historical accuracy, if it’s from 1860, can’t we be fairly certain it was used during the Civil War?

There was also an old timey kitchen set up down underneath the barn too. 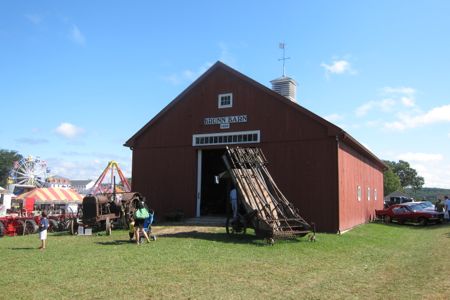 Is this a museum worth paying the twelve bucks just to walk through the fair to get to? No, don’t be silly. But when one considers the attendant antique tractors and cars, it begins to approach that cost. (And of course that twelve bucks gets you access to all the other stuff people go to town fairs for.) 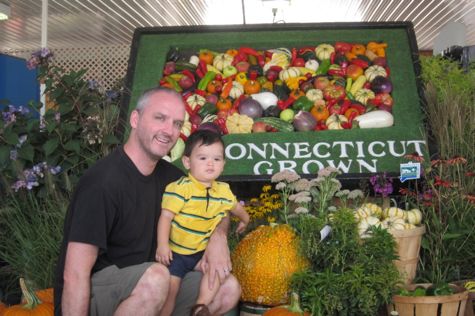