Now this place just looks like a National Historic Landmark. I’d stopped by in the midst of my Middletown Heritage Trail experience and wussed out on poking around inside. Now I know I should have… Especially since it was built with illegal opium money! 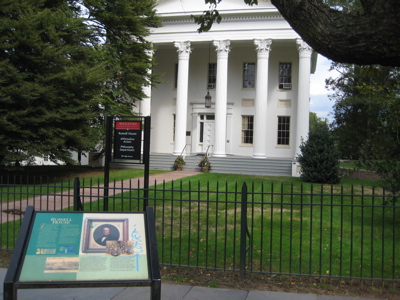 The Samuel Wadsworth Russell House in Middletown is a landmark Greek revival mansion built in 1828. It is now owned by Wesleyan University. In 1970, the Russell House was listed on the National Register of Historic Places and it was declared a National Historic Landmark in 2001.

Clearly I didn’t write any of the stuff below. Nor do I understand it, but hey, here you are…

This building was erected in 1828 for Samuel Russell (1789-1862). Russell founded the trading firm of Russell & Company in Canton, China after serving there as trading representative of the Providence, Rhode Island firm of Edward Carrington & Company. Between 1818 and 1831 Russell’s fortune was made in the illegal yet highly profitable importation of Turkish and Bengal opium into the port of Canton and the exportation of fine teas and silks from there to Europe and the United States. In 1828 when his house was built Russell was in Canton, and his friend Samuel D. Hubbard worked with Mrs. Russell to supervise the building of the house. In 1831 Russell returned to Middletown and his new home where he resided until his death in 1862.

The Russell House was designed by Ithiel Town, one of the period’s foremost architects and major proponent of the Greek Revival style in America. David Hoadley (of Curtis and Hoadley), a prominent New Haven builder-architect, superintended the construction. The house has the form of a Greek temple with six full height Corinthian columns supporting a heavy entablature and low flushboarded pediment. The front (west) wall has five bays with recessed panels between the first and second story windows except in the center bay, where pilasters support a high entablature over the double entrance door. This doorway is surrounded by side and overlights whose frames are decorated with fretwork. The windows on the two-bay side facades are separated vertically by panels like those on the front. Stucco scribed to resemble large block ashlar covers the brick masonry walls. The house has a brownstone foundation supported by load bearing masonry walls and a gable roof.

An antemion decorative motif is used on the portico column capitals, front corner pilasters, and in the attic window screen covers. The heavy entablature has three bands in the architrave; a band of foliated molding under the plain frieze; and a denticulated cornice defined by a bead and reel molding and an elaborate crown molding. Around 1855 the rear portico was enclosed and is now divided by six pilasters (originally square pillars) into five bays of windows with small protruding balconies in the end bays. A two story north wing, added around 1855, is attributed to Alexander Jackson Davis, a former partner of Ithiel Town. Although not consistent with the symmetry of the whole, it is treated sympathetically through the use of identical pilasters and entablature. 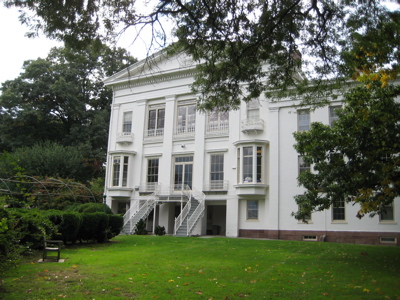 The Russell estate occupied all of the block bounded by High, Court, Pearl and Washington Streets. Extensive grounds behind Russell House sloping down to Pearl Street were planted with formal gardens which included boxwood imported from England and plants brought from China by Samuel Russell. A double stair of intricate ironwork was added to the rear of the house at the time the portico was enclosed. It leads from the first floor down to the garden lawn.

The interior is divided by a spacious center hall with two rooms on either side. A stairway with landing is at the end of the hall. The four chimney stacks are placed in the outside wall of each of the rooms off the hall. The south parlors communicate through a set of folding doors, while the original north rooms have been opened up to provide a single large space.

Close attention to detail characterizes the decorative treatment throughout the interior. Trompe l’oeil wall paintings simulate paneling on the walls of the north main rooms, entrance hall, and stair-well. Similarly elaborate decoration is seen in the marble fireplaces with Ionic columns supporting the mantelpieces, and in the recessed paneling of the doors and folding window shutters. A wide frieze and heavy cornice of decorative plaster define the high ceilings of the interior.

The Russell House represents a significant stage in the development of Greek Revival architecture in America, In his work Town and Davis, Architects, Roger Hale Newton mentions the Russell House as “indicative of the hand of Town in its undeniable sophistication.” Professor Talbot Hamlin places its design “in the richest Greek vein” and also states that “its Corinthian columns and open plan are urban and magnificent rather than in the simple old tradition.” Newton elaborates on the latter point when he states that the communicating suite of parlors with their grand scale “may have reflected an urban development quite contrary… to the prevailing modern provincial places.” The Russell House demonstrates an early attempt by Ithiel Town to match the sophisticated design of an imposing Greek temple form with a compatible interior plan suited to living and entertaining on a grand scale. This plan was used in Town and Davis’ later work in New York, and its successful application to the temple form provided a basis for vernacular interpretations of the Greek Revival style which dominated residential construction until the advent of picturesque architecture.

The construction of the Russell House in 1828 established a standard of luxury and elegance for the residential architecture on High Street during the 19th and early 20th centuries. Although many other imposing homes were built in this area of Middletown, the Russell House was never surpassed in sophistication and grandeur. It stands a monument to the personal qualities of Samuel Russell and to the exciting era of the China trade when Russell carried Middletown’s mercantile tradition to its greatest heights.

The mansion faces west from the southeast corner of High and Washington Streets. The large scale of execution and the imposing qualities of the architecture enable this building to dominate the surrounding area. High Street during the 19th and early 20th centuries was the most prestigious residential area in Middletown. It is now part of the campus of Wesleyan University.

After remaining in the Russell family for five generations, the house was deeded to Wesleyan in 1937 by Thomas Macdonough Russell, Jr. It was known as Honors College until 1996. The building is currently being used as an events facility and home to the University’s Philosophy department.