Q. What’s the best way to engage a 5-year old at a succession of art galleries?

A. Chocolate toilets and butt cheeks. 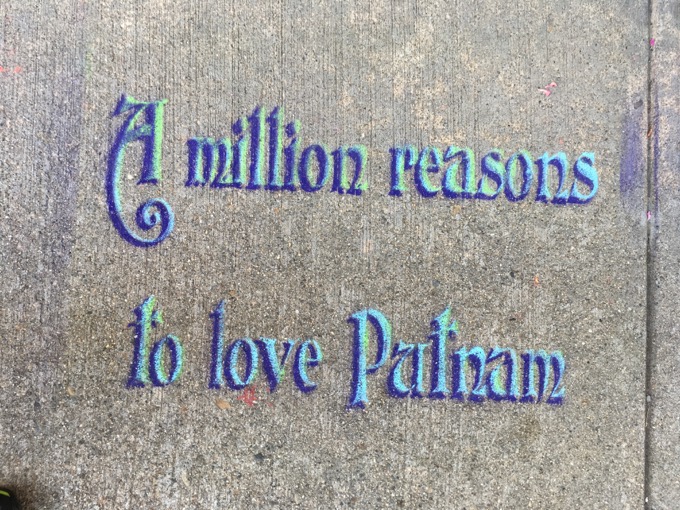 It’s simple, really. And thankfully, the town of Putnam dutifully… doodyfully?… came through for us.

Putnam has been going through a little renaissance of sorts over the past few years. I know nothing of local politics or attitudes, but for a tiny post-industrial town along the Quinebaug River entrenched in the Quiet Corner, they seem to be making a push to be sort of hip. 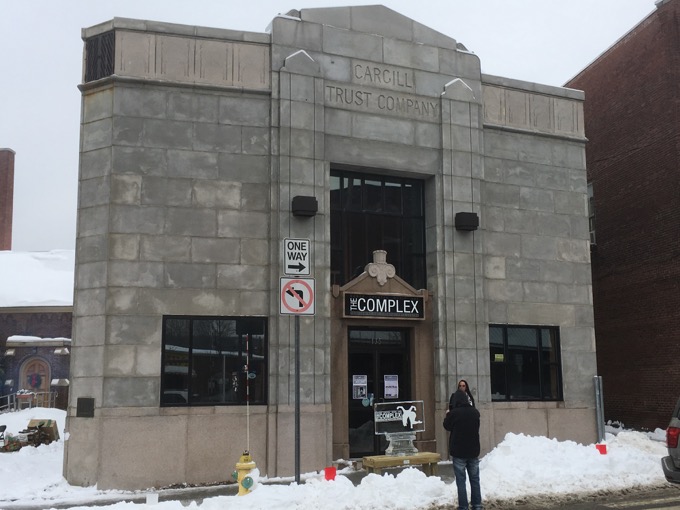 They have town-wide Fire & Ice Festival. And a giant car show in August. And what appears to be a growing arts scene. Yes, li’l ol’ Putnam has several art galleries in its downtown area. Not only that, there is a coffee shop with an art gallery! And a bar with an art gallery! And probably much more for a visitor to Putnam to discover… like a bunch of neat little “fairy doors” hidden around downtown. 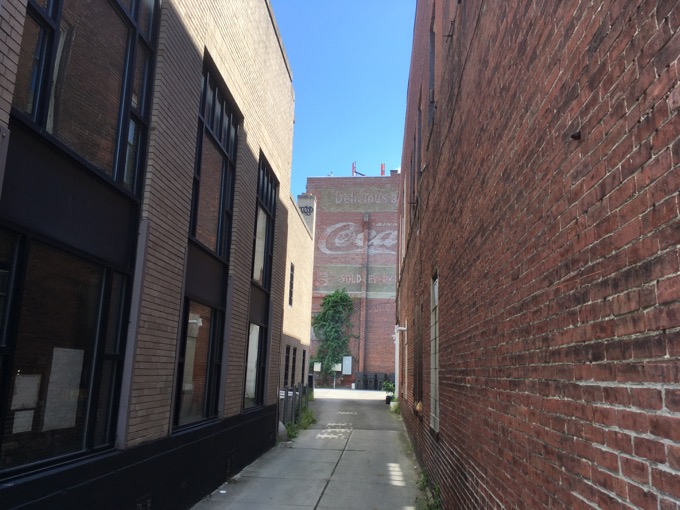 Putnam still has an old Coke ad visible down an alley

When we went to the Fire & Ice Festival, we ducked into a few of the galleries to get warm, get fed, and get our bearings. Okay, that last one isn’t true… downtown Putnam consists of 2 blocks and maybe three streets.

The Silver Circle Gallery is interesting in that it exists in a wide hallway between some restaurants and shops. 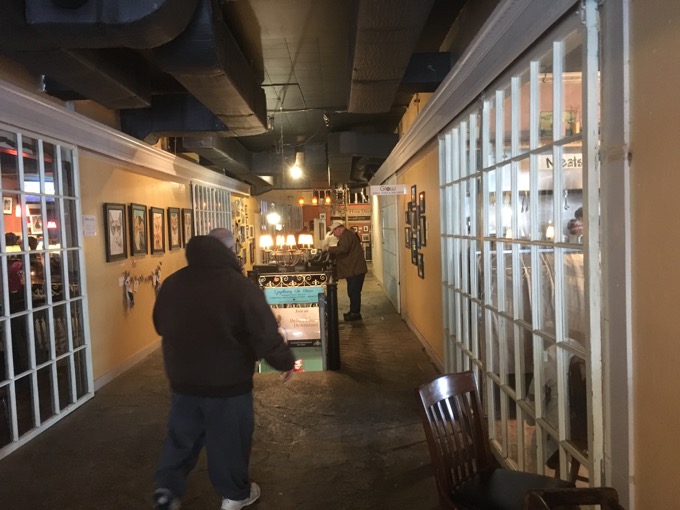 It features local artists and at times, they are there to chat and sell their stuff.

My first visit to the Silver Circle was actually in October 2016 after a rainy Sky’s the Limit hike in Thompson. This is when Calvin first saw his favorite featured art in his life: 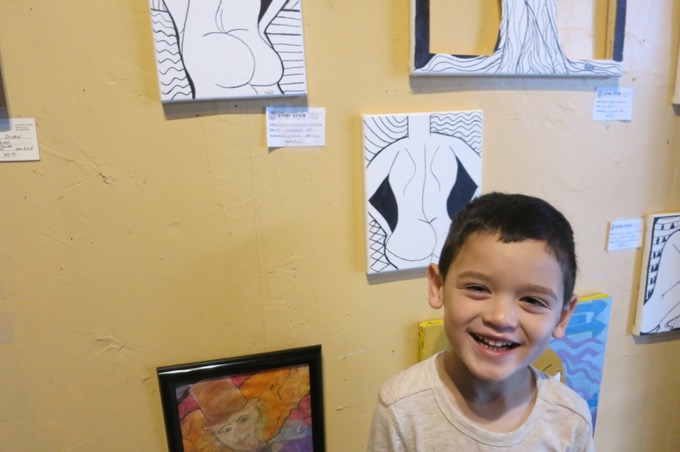 Then, a few months later, we visited again during the aforementioned Fire & Ice Festival. Calvin could not have been more excited to show the work to Hoang… practically dragging her into the hallway. 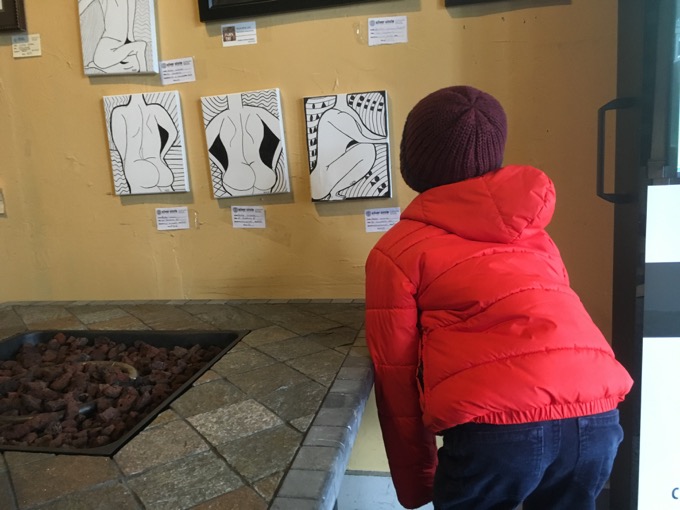 Pure joy. The artist’s name is Heather Lechene if anyone wants to get Calvin something for his birthday.

On our third (and final) visit to Putnam, while searching for the town’s neat little Fairy Doors (more on them below), Calvin went into the gallery in search of his favorite painting. 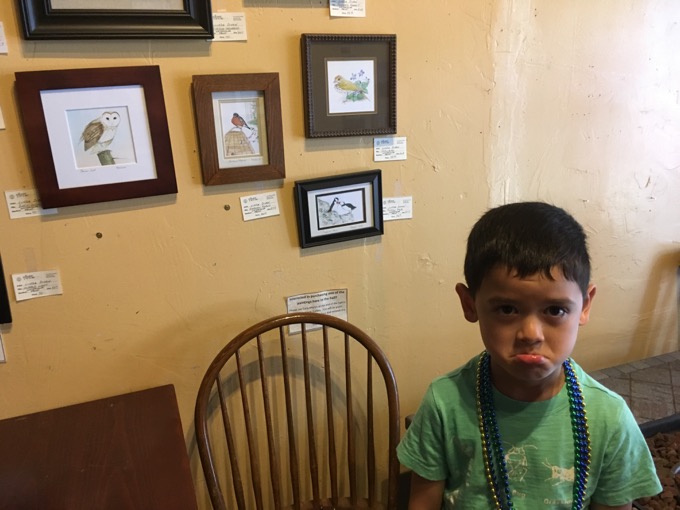 As if the butt cheeks weren’t enough, there was a chocolate sculpting competition during the February Fire & Ice Festival. I think this took place at … I’m not sure. Some extension of the COMPLEX theater/arts space?

Anyway, there were chocolate sculptures. Some were really good: 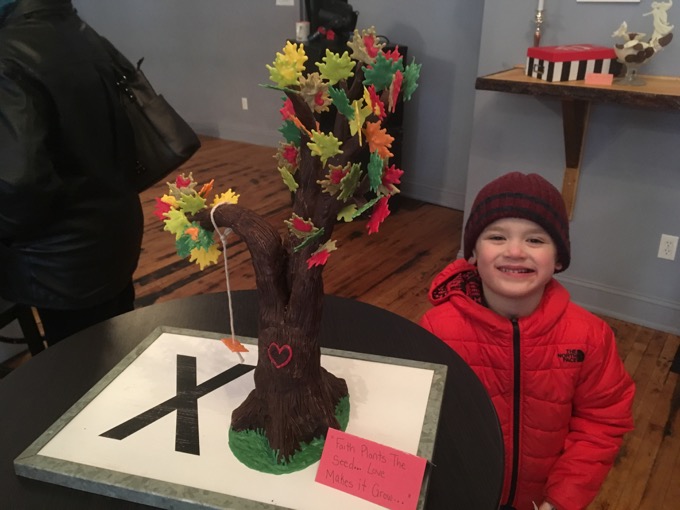 Some were pretty good: 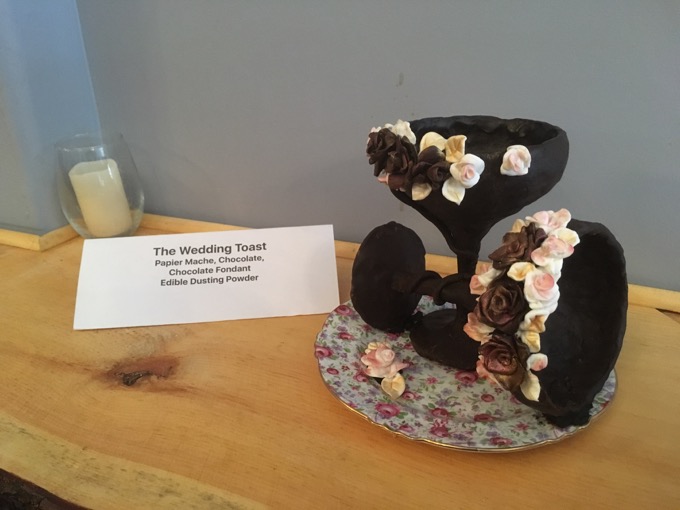 Some were merely okay and the picture was out of focus but I’m publishing it because the picture reminds this writer of that awesome Japanese game show where contestants must bite things that may or may not be chocolate. (You really should click that link.) 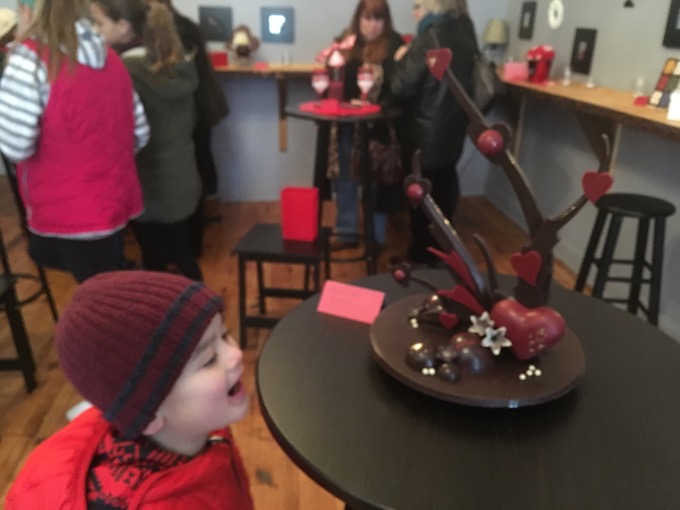 And one made Calvin’s day: 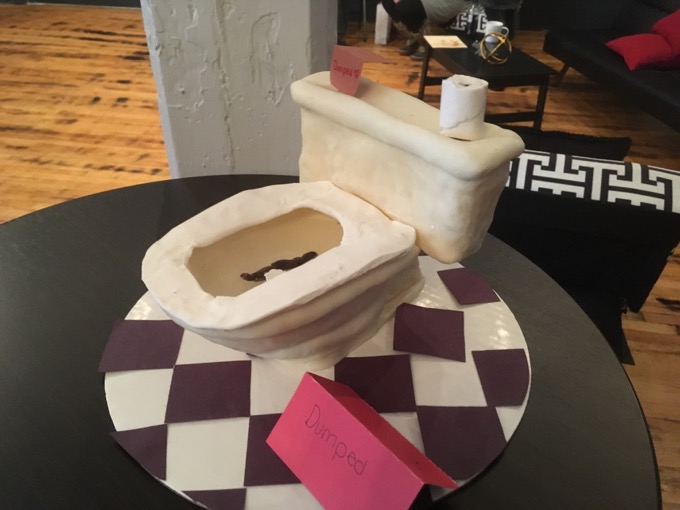 I am not sure what would possess one to spend the time and energy it took to make this thing, but there you go. And yes, that is a choco-turd you see in the bowl.

Putnam is a magical town. 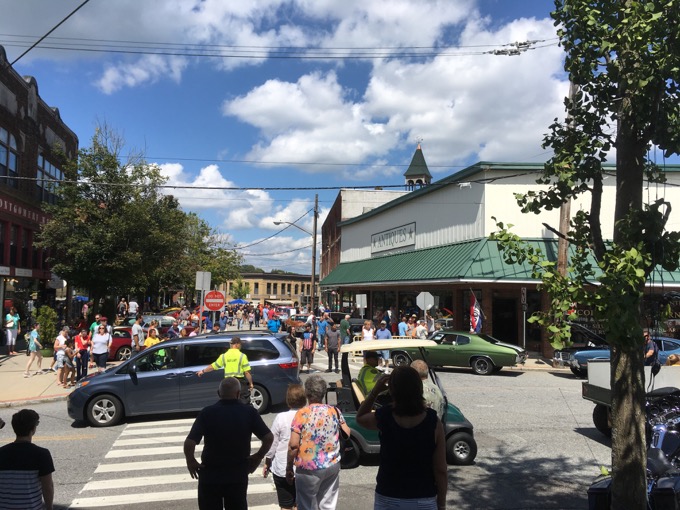 Another place with an art gallery in Putnam is The Stomping Ground Café… which I can only assume is awesome, because it was packed on the two days in town that I noticed it.

One of those days was in August, when I brought my boys out here to “complete” the town. One thing on our agenda was finding the famous Putnam Fairy Houses! 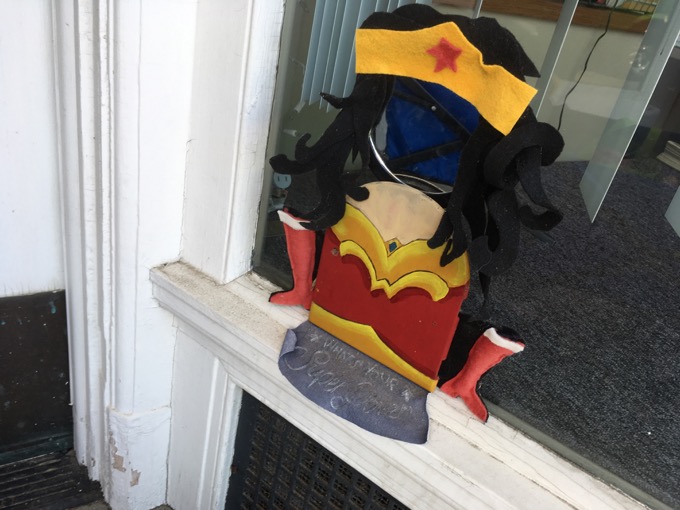 I’m not going to bother with how or why this fun little street art project began, but will settle for just telling you that it exists.

Right in broad daylight, at over a dozen businesses along Main Street, there have been fairy houses for a few years. 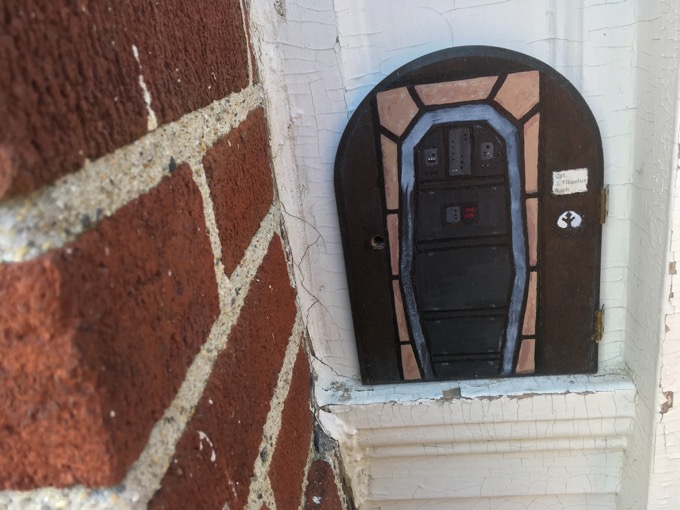 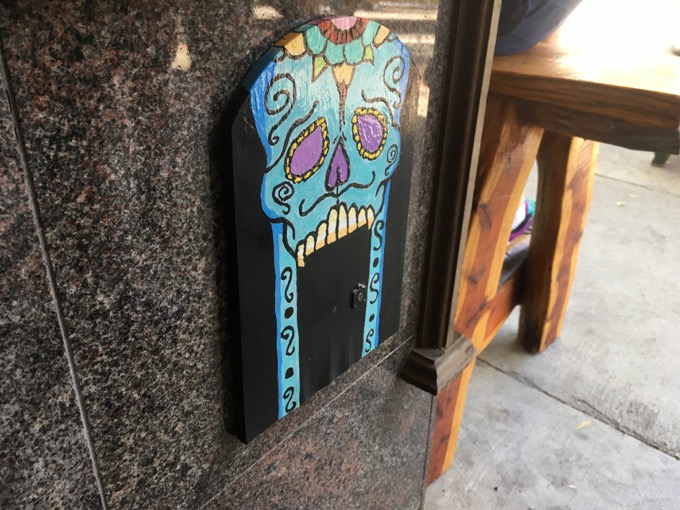 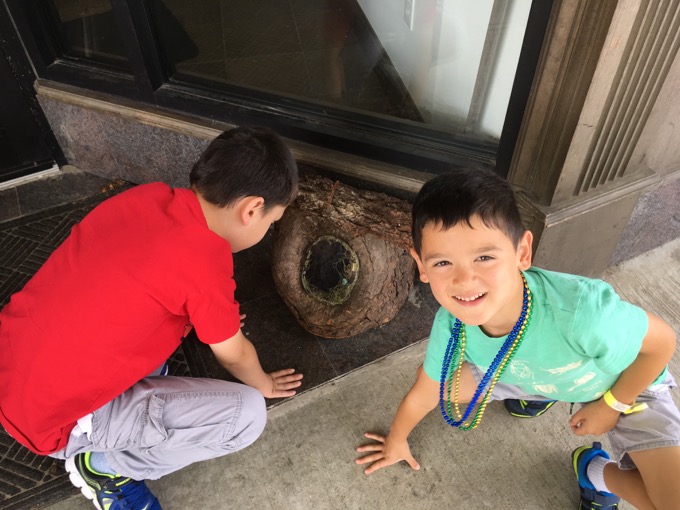 As I wrap up everything to do here, I’ve come to really appreciate its uniqueness and how it seems to be reinventing itself.