Would I bother with this place if not for my goal to completely complete Vernon?

No. Of course not.

You better bet your bippy I am. 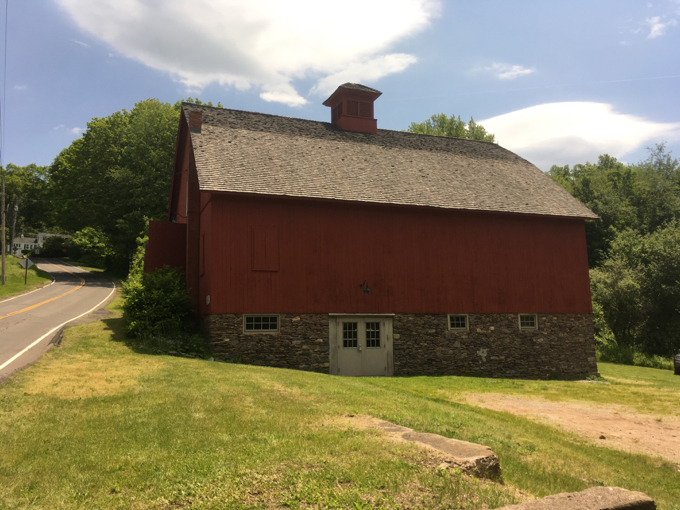 The Friends of Valley Falls are creating a Heritage Center in the stable that will tell the story of Valley Falls Park and Farm. Funds have been raised, renovations being made to accommodate visitors and displays created to tell the story. The area is rich with history, but the focus will be on the Beach family and gentleman’s farm era.

Even in its infancy, the buildings at the Farm are pretty cool. The owners of the property were giving the tours and believe it or not, I wasn’t alone. 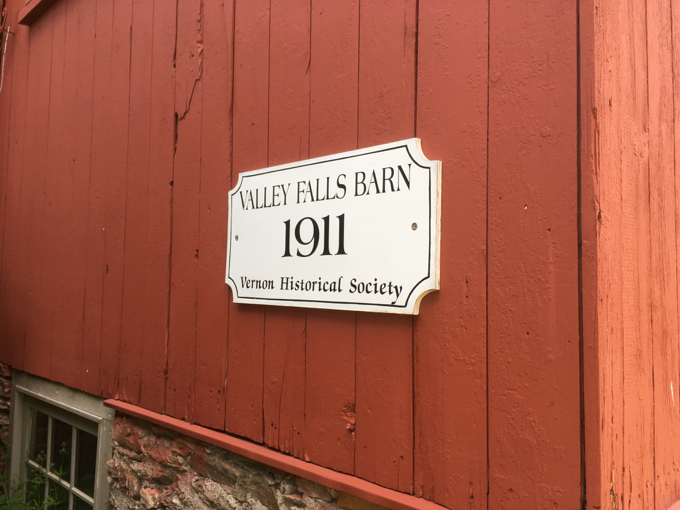 The Farm sort of overlooks the Valley Falls swimming area near the park’s main entrance. There is much hiking to do here and the Shenipsit Trail passes nearby as well. There is a historic 1850’s farmhouse and six other building on the property.

Valley Falls Farm is owned by the Friends of Valley Falls with the exception of the Red Barn, which is part of Valley Falls Park. Its history is intertwined with that of the park. It gets more confusing because when I spoke to the man during the little tour, it seemed like he owned the joint himself… but I guess he was from the Friends group. 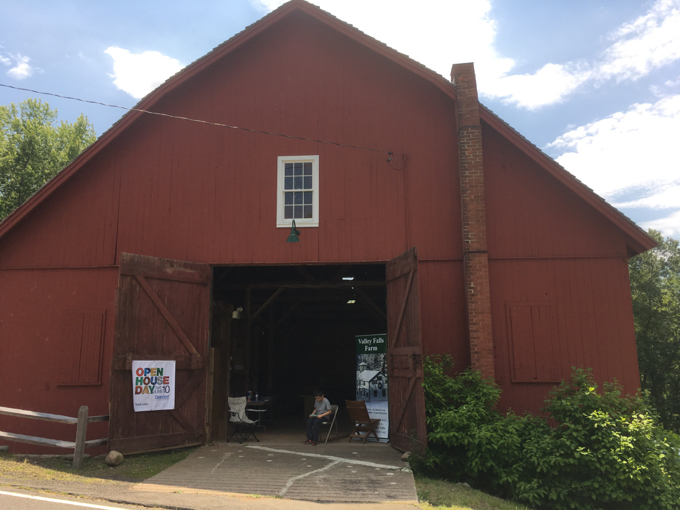 I’m just going to highlight some stuff here. If you really want to know more about the place, go here. My favorite things I learned during my tour were that the property was once owned by some guy named Count Munchow and that the first scientific description of glaciation happened very nearby.

The farmhouse was contructed about 1850 during the ownership of Anson Lyman. The Valley Falls Barn is a late timber frame structure, with all of its timbers, braces and lumber cut with a circular saw. I’m not sure why that matters to anyone, but it’s clear the barn was built a bit later than the house. The barn, as all old timey barns do, burned down around the turn of the 20th century. 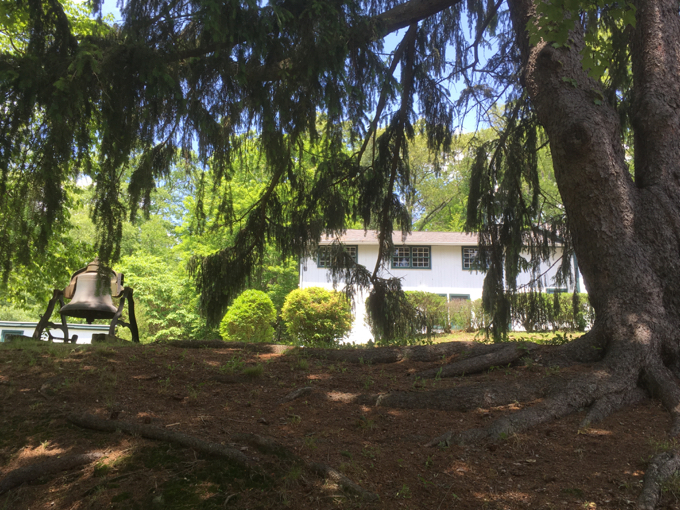 The stable is the largest structure here, and the most impressive. Good ol’ Count Hans Munchow had this carriage house built in the early 20th century. Munchow was all about his fancy horses and used to ride them through downtown Rockville. I’m sure no one thought that pretentious at the time.

Munchow was supposedly from Hungarian aristocracy. He is credited with rebuilding the barn which is now part of Valley Falls Park. Only two years later, Munchow transferred this property to his wife, including tax liens and an attachment. He apparently left Vernon (supposedly to go to Hollywood to produce motion pictures) and within a year of that transfer (1913) his wife sold the property and left Vernon too. 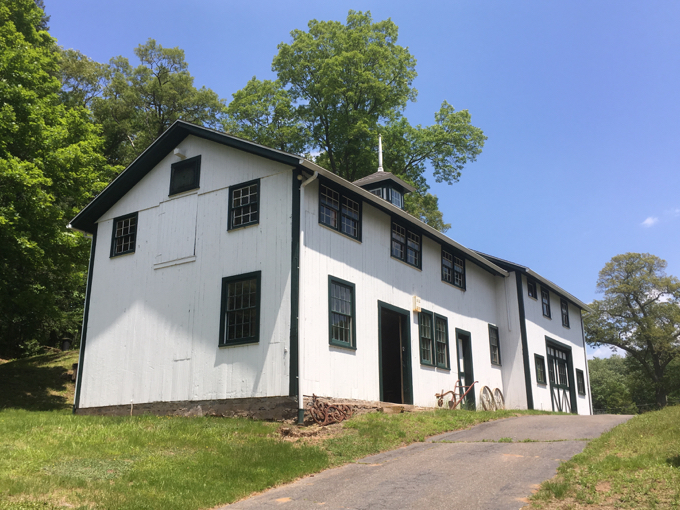 The Stables; soon to be the Heritage Center

The Beach family came to own the property and kept it up nicely. The family’s year round home was located on Woodland Street, Hartford, not far from the Mark Twain/Samuel Clemens home.

During the 1960’s the hayloft of the stable was converted to a tavern-type room. Today, the room is used in the summer for our Friends of Valley Falls board meetings and it will someday be the main exhibit space for the museum. 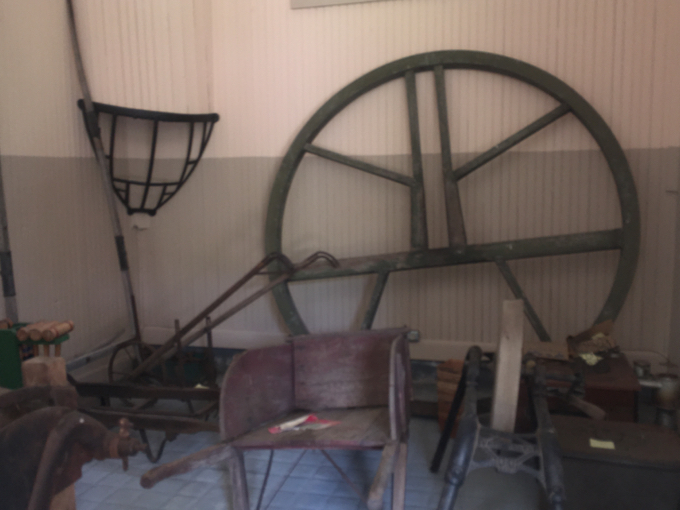 There’s also an icehouse on the property. Ice was harvested from the lake and kept cool in the semi-underground little building. I like that a couple Norway spruces stand tall over the structure providing some shade. Look out for the original ice cutting tools in the future museum!

Can’t forget the manure shed and the piggery. In short, pigs were raised here. Pigs poop. A sloped, underground conduit was built to move the poop away via gravity from the pigs and into the manure shed. I found that to be pretty cool. 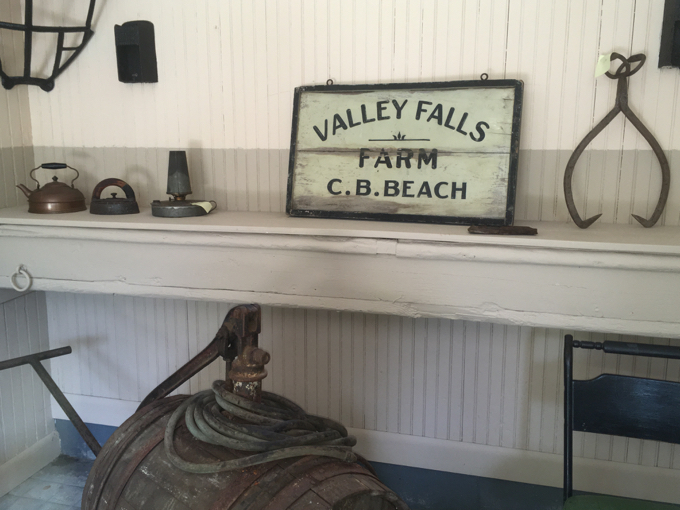 Last but not… actually, yeah, these are the least interesting – a cold cellar, a woodshed, and a couple cold frames round out the buildings on the property. I don’t mean to diminish any of this place, as it’s really cool everything still exists to some degree of authenticity. It’s a pretty area and I have high hopes for a future museum here.

And the cold cellar is rad. Built right into the side of the hill with proper ventilation and whatnot. It reminds me of one of Connecticut’s coolest businesses – Horse Ridge Cellars’ Cold War Wine Bunker – which I’ve visted. 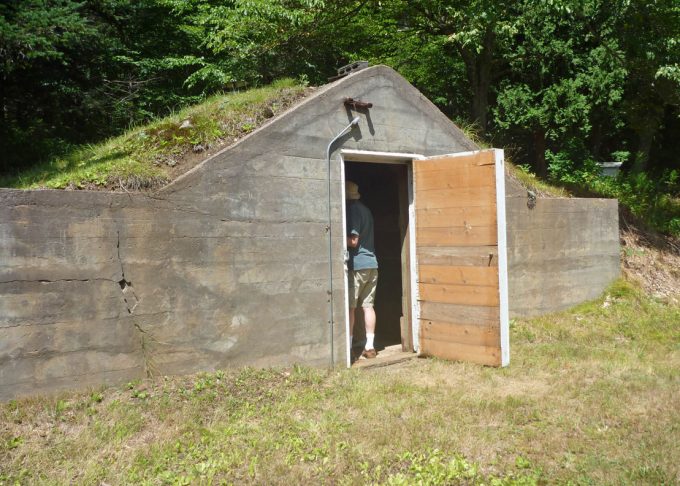 The Cold Cellar from the Tankerhoosen folks

As I was talking with the guy and impressing him with my vast knowledge of Mundane Vernon (that stand of Tamaracks at the Belding WMA! The Vernon Depot Outdoor Museum! That super short Main Street across town!) he dropped a bomb on me.

That just up the Tankerhoosen River lies the spot where some guy got the idea for the very first time about glaciation! Wow. My genial host seemed surprised at my interest in this. In fairness, he had no idea that I’ve seen literally dozens and dozens of museums just like Valley Falls Farm Heritage Center. 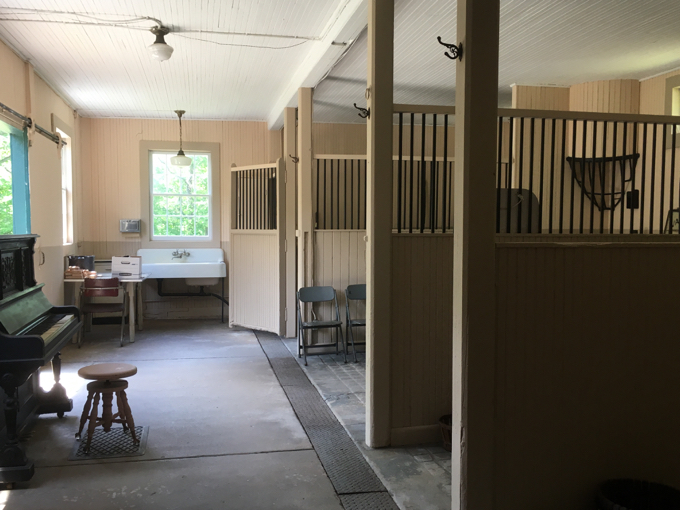 So check this out… If you read about the local mills on the Talcott Ravine page or anywhere else, you know that Vernon was a hotbed of mills. One of those early businessmen was a guy named Peter Dobson.

While his crew were digging some land to build a new mill, Dobson noticed something over and over. Information comes from here:

… Peter Dobson made the observations, which led to his suggestion of what has been called “the glacial theory”, in explanation of certain marks and appearances on the surfaces of large stones, found in various places on both sides of the Atlantic, – a theory which has been adopted generally by geologists in Europe and America. 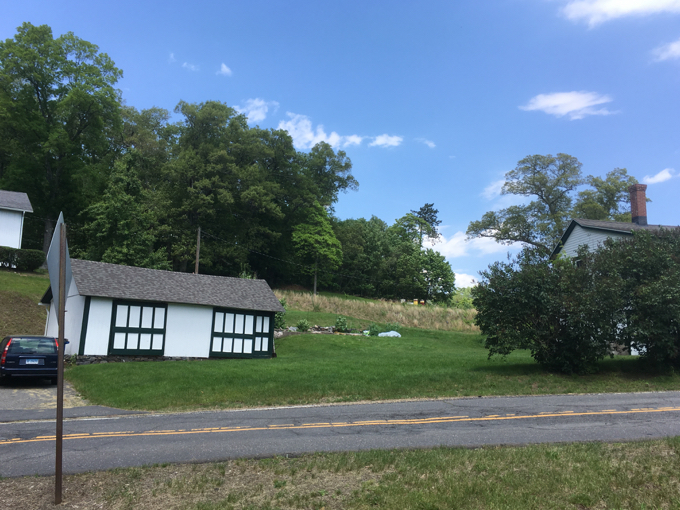 Just so we’re clear, Dobson wasn’t a scientist let alone a geologist. And it’s not like the geologists of the day weren’t curious about certain consistencies they were finding in different parts of the world. Then this mill owner guy in Vernon, Connecticut figures it out.

The suggestion of this theory was first made by Mr. Dobson in a letter addressed by him to Professor Benjamin Silliman, under date of November 21, 1825, and was published in the “American Journal of Science” for July 1826.

Oh man! Benjamin Silliman! Now there’s a Nutmegger you should know. I won’t even get started on him, but props to Dobson for knowing who to go to.

Plug: My friend Cathryn Prince wrote A Professor, A President, and A Meteor: The Birth of American Science which explores Silliman’s life and how his discoveries were accepted in Jeffersonian times. Go buy it. 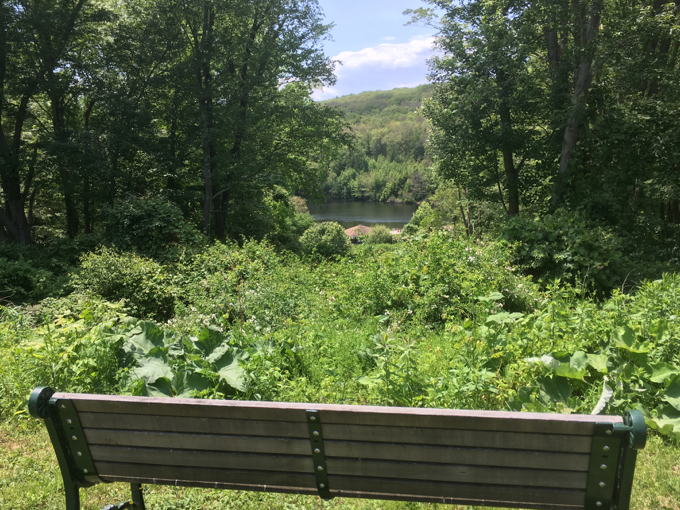 We American wrote so much better back in the day:

In this letter Mr. Dobson wrote: “I have had occasion to dig up a great number of boulders of red sandstone and of the conglomerate kind, in erecting a cotton manufactory, and it is not uncommon to find them worn smooth on the under side, as if by their having been dragged over rocks and gravelly earth in one steady direction. On examination, the exhibit scratches and furrows on the abraded part. I think that we cannot account for these appearances unless we call in the aid of ice along with water, and that they have been worn by being suspended and carried in ice over rocks and earth under water.”

I know this has nothing in the world to do with Valley Falls Farm, but whatever. Perhaps they’ll read this page and when they get their exhibits in order, they’ll add something about Dobson’s contribution to science. I happen to think it’s hugely important and cool. 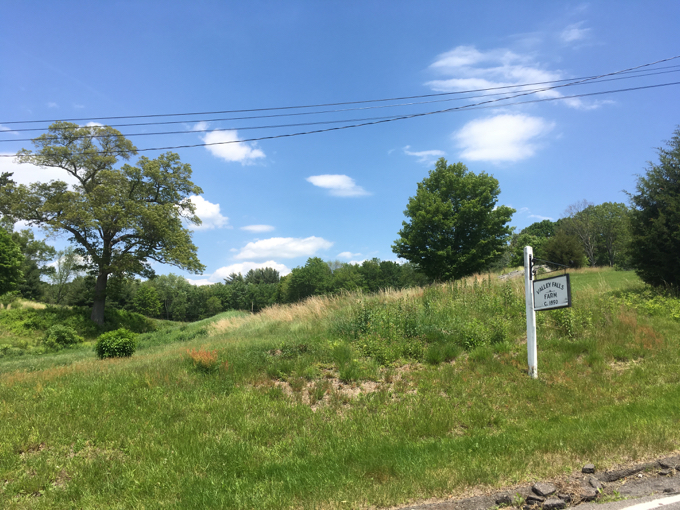 For real; this guy upended the world of geology 170 years ago!

Referring to this letter, Sir Roderick I. Murchison, one of the most eminent scientists of this [19th] century, in an address he delivered before the Geological Society of London, February 18, 1842, spoke of it as “a short clear, and modest statement, which, though little more than a page in length, contains the essence of the modified glacial theory, at which we have arrived after so much debate.” He added: “I take leave of the glacial theory in congratulating American science on having the original author of the best glacial theory, though his name had escaped notice, and in recommending to you the terse argument of Peter Dobson, a previous acquaintance with which might have saved volumes of disputations on both sides of the Atlantic.” 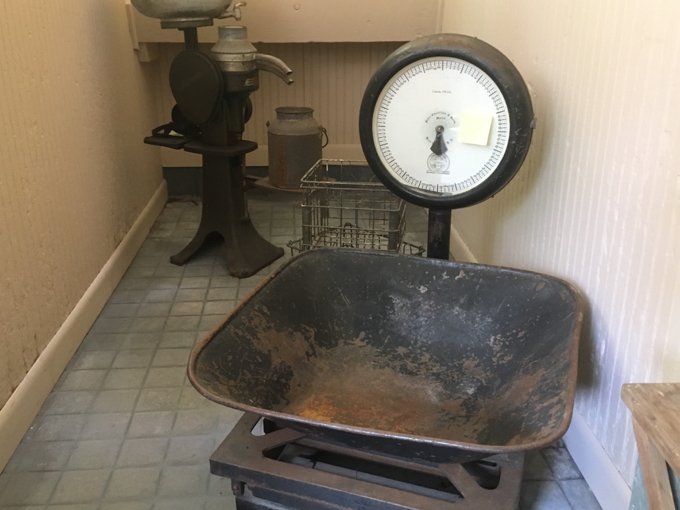