There are a lot of museums in Connecticut with the word “Academy” in their names. Somewhere around 10. You can probably figure out why… there were lots of academies that served a town’s children that then became too small to do so but the building was a municipal building and therefore didn’t get knocked down right away and then were sold cheaply to the local historical society decades later, annnnnd here we are. 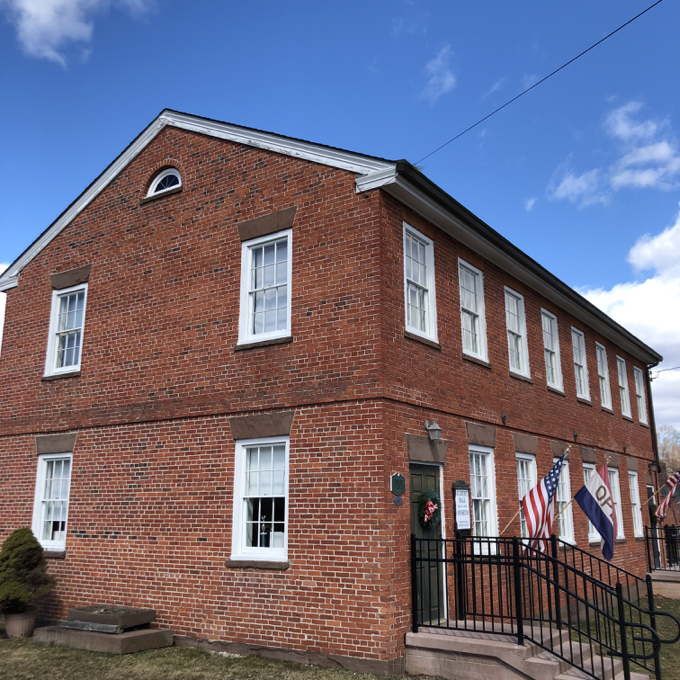 At Rocky Hill’s Academy Hall Museum. On a lovely random March Saturday with Damian when I know we’ll be alone in the little one-room museum and there wouldn’t be any behavior issues for him and we opened the door and…

Oh crud. It’s a St. Patrick’s Day party, Rocky Hill Historical Society style. Not good (with Damian.) But I forged ahead. There were several little kids who were forced to be there during my visit, and another kid showing up with an iPad is quite interesting to other little kids. 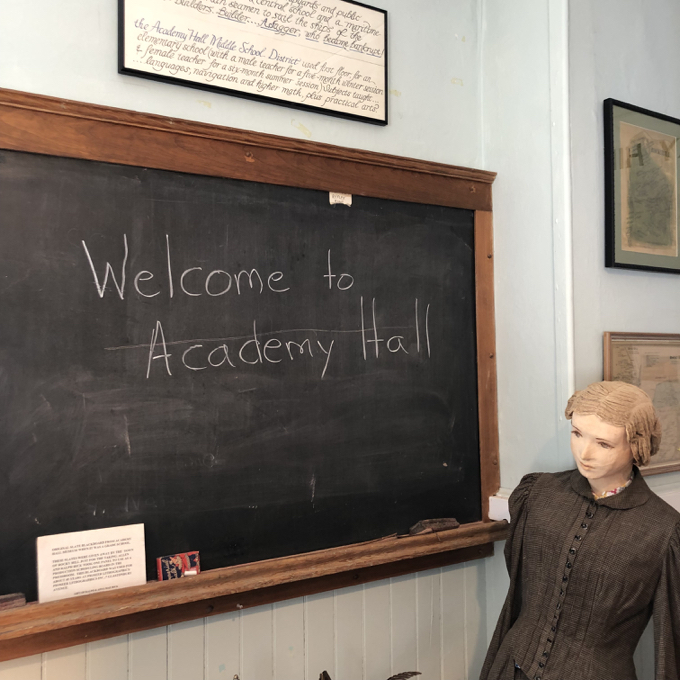 But my little kid is 13 and… let’s just say I was incredibly wary about the situation. Damian has been known to, um, react harshly to other kids looking at his iPad. I did not want this to happen and I hate his Smith-Magenis Syndrome. 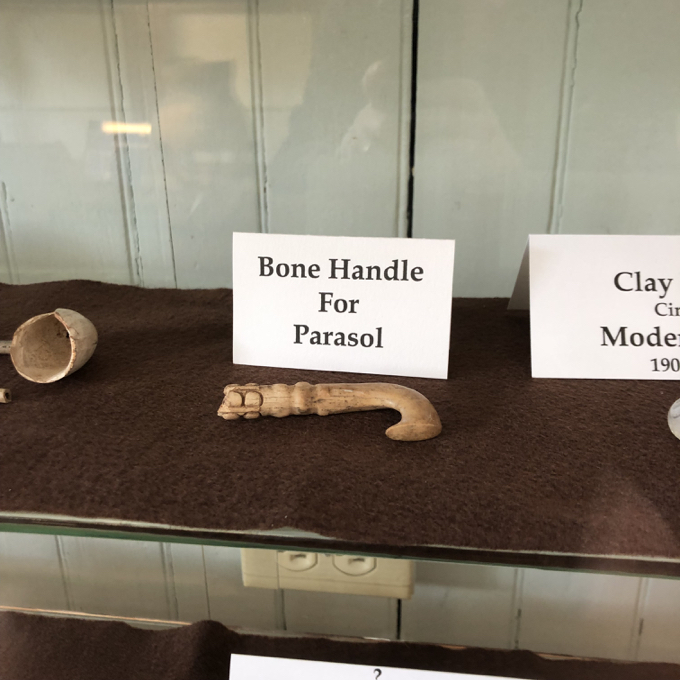 (If you’re confused – and you should be – Damian says he wants to go to places like this because its places like this where I allow him to have his iPad to keep him occupied while I do my thing. He certainly has no interest in Rocky Hill’s history or, really, any history. But it’s a nice win-win for both of us in a sense. I get to museums and he gets to play his iPad games.)

Damian found a chair sort of away from the fray and I began poking around. Of course, since this is the Rocky Hill Historical Society St. Patrick’s Day Bash, everyone there knew everyone else. Except, well, except for the weird guy and his iPad playing son, that is. 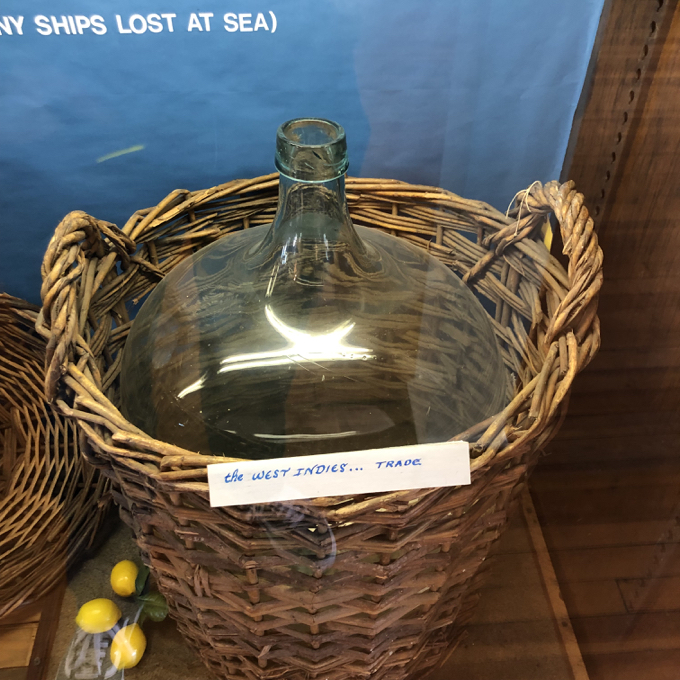 I was greeted like a conquering hero. The volunteers who help out around here were quite pleased that we had stopped in. Many offers of help were made. Irish desserts were served. A small tour was proffered. Meanwhile, I just kept an eye on Damian and tried to take in the town’s history.

To be clear, I wasn’t rude or anything. I explained the situation and then the wonderfully nice woman told me she used to be a schoolteacher – docents are all retired teachers it seems – and don’t worry about Damian, and – okay, okay. You’ve never met a kid like mine, but let’s do this. What’s a shad horn? 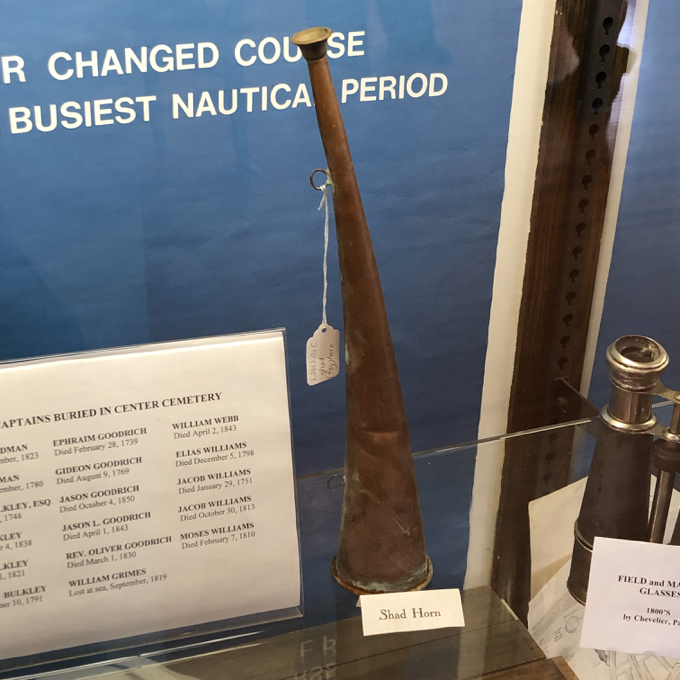 Wait. What? I have one question about one prominently displayed item and… nothing? Bill? 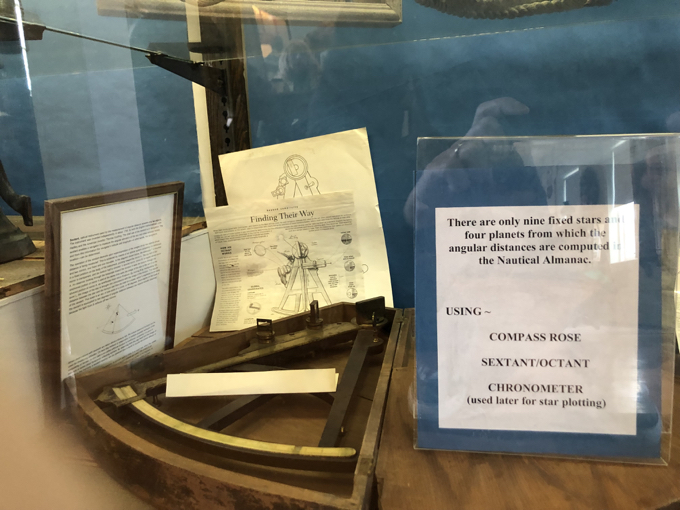 My innocuous little question turned into an all hands on deck quest. Bill and Betty and Sue (not their real names to protect the innocent… and because I have no idea what their real names are) were on the case. Scrambling around, whispering my question amongst the crowd. 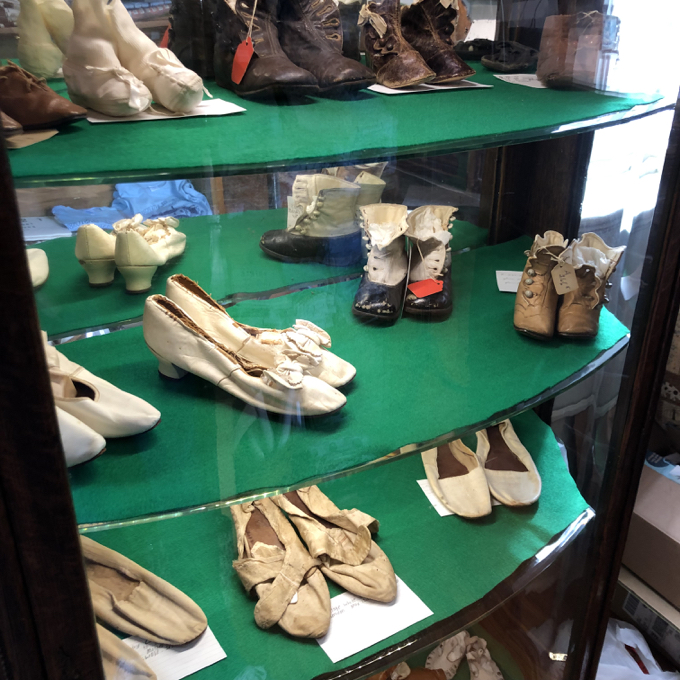 This was bonkers. As everyone tried to find me an answer, I continued absorbing the rest of the museum. There’s a section about dinosaurs and fossils… which you’d expect. After all, Rocky Hill is the home of Dinosaur State Park. I was showing Damian some fossil imprints when I was interrupted to get a shad horn update. 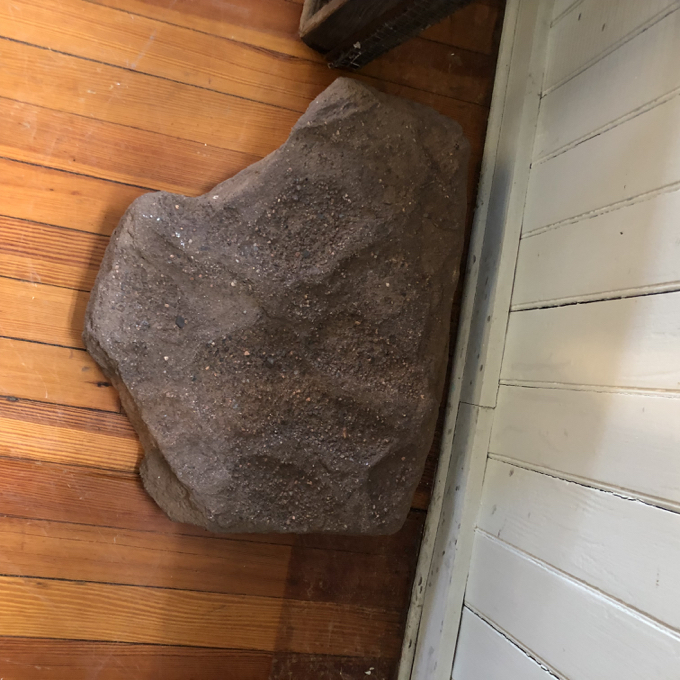 “Thanks,” I said, as I turned to the Native American artifact section. The museum does a good job going back – way back – in local history. Like 800 years back. Which is cool, as that’s when some of the artifacts found by farmers digging up their land date to. 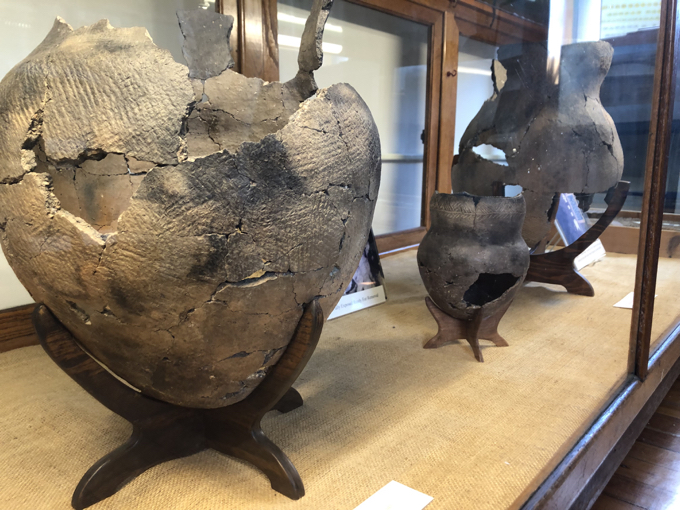 When I poked around online for some Rocky Hill history flavor to add to this page, I came across a document titled “A Brief History of Rocky Hill.” Cool. That ought to help me out. Let’s see… let’s go back to the beginning of this brief document…

Oh. So it’s going to be like that, eh, Rocky Hill? By “brief” you mean back to the Singularity? Sheesh. I’ll spare you CTMQ readers and jump right from dinosaurs to Native Americans to… the Rocky Hill – Glastonbury Ferry.

One of the first non-museum things I did for this website and as you surely know, it’s the nation’s oldest continuously operating ferry service! The original ferry, which dates back to 1655, was a small raft pushed across the river using long poles. 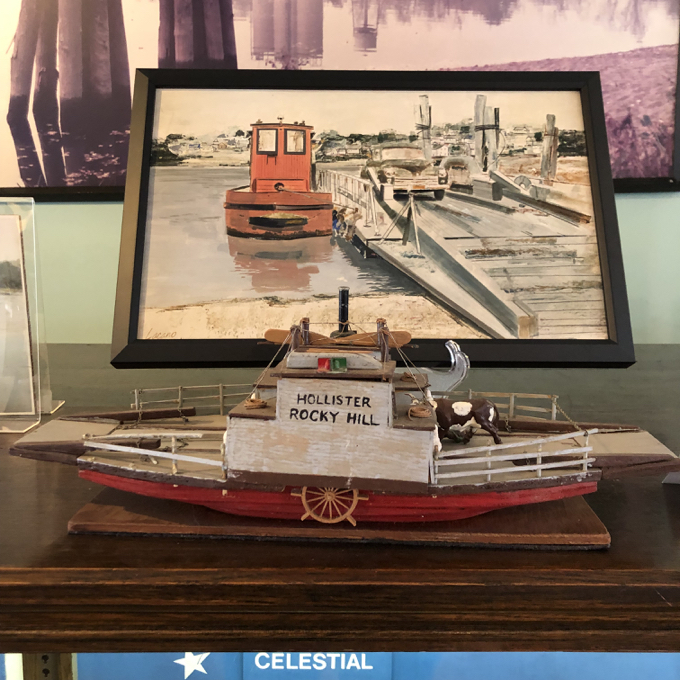 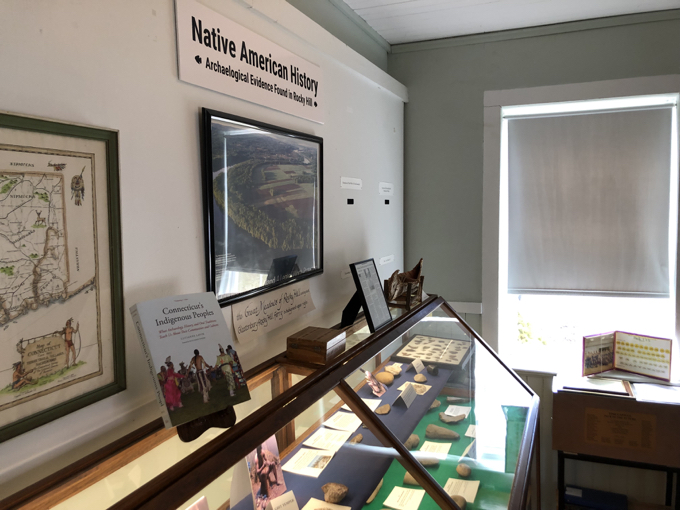 There’s also an old pay phone. A “1950’s Automatic Electric Paystation Telephone.” And check this out. Back in the day you could pick up the receiver and connect to an operator. She (and it was always a she) would connect you to whomever and you wouldn’t have had to deposit coins until that party answers. 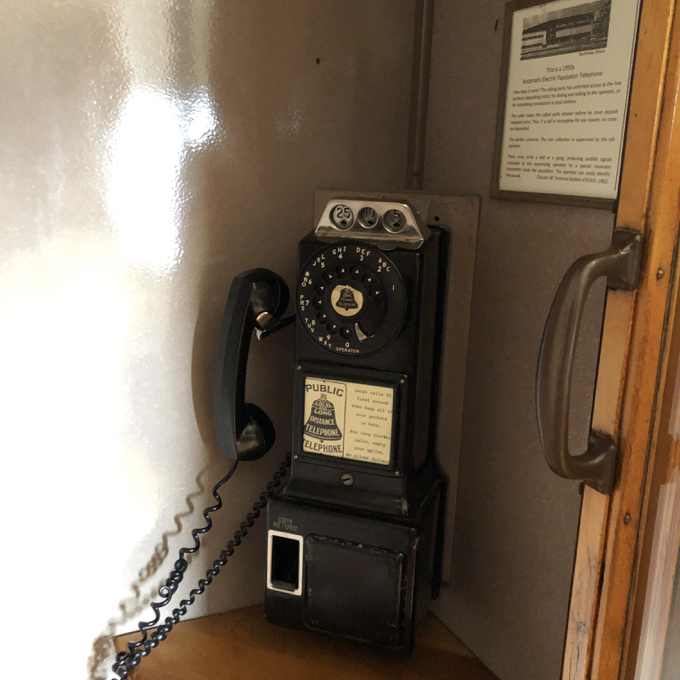 Fancy that. The operator would say, “One nickel” or whatever and the nickel would go in and its size would make it hit a certain bell that would transmit that tone to the operator to know you had made good. Amazing that those tones were literally what was used for decades (as all good phreakers know, of course.) 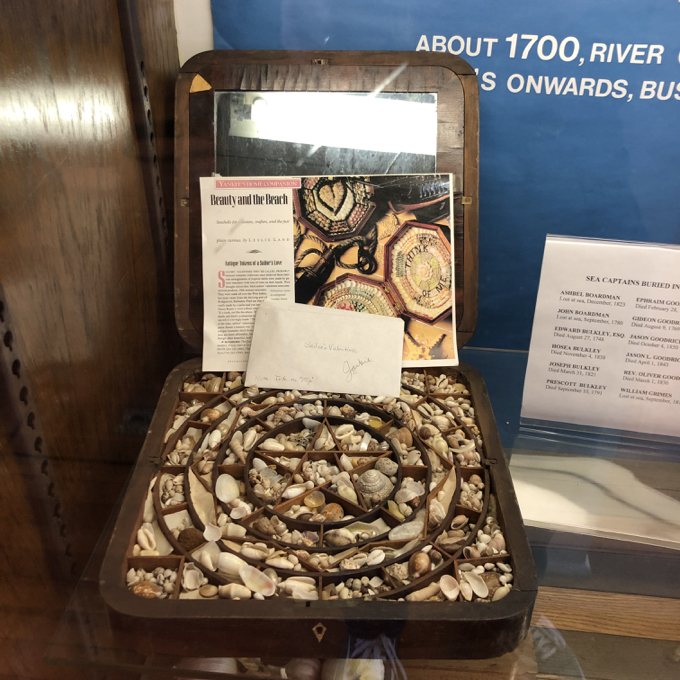 When I think of Rocky Hill, I think of the ferry first and foremost and then lots of river-related stuff. I’ll also now think of Academy Hall and Rocky Hill’s fine historical society. Neat little museum with very kind and helpful folks.

The town is kind of too far north to have had much of a ship building past, and is too small and close to Hartford to have been a major port of any sort. For Rocky Hill, the river was mostly a great source of fertile soil and some shad I guess.

Did someone say shad? As in… a shad horn? 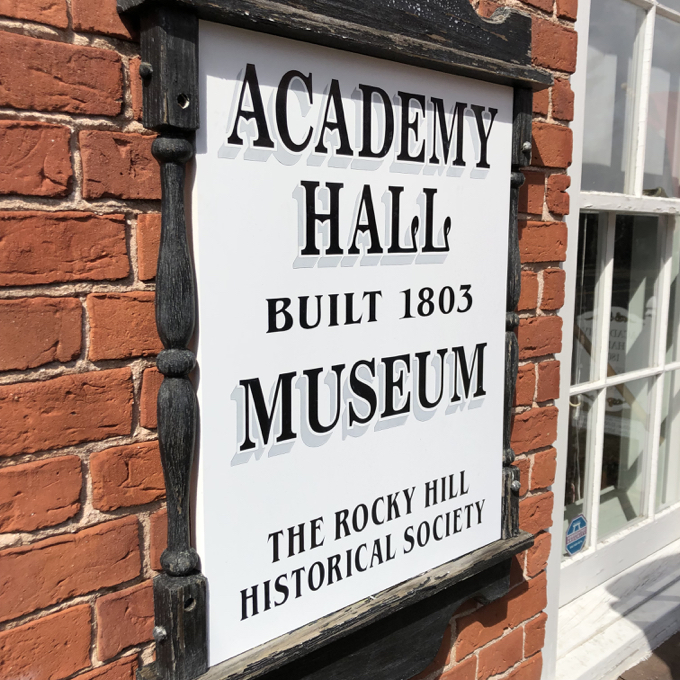