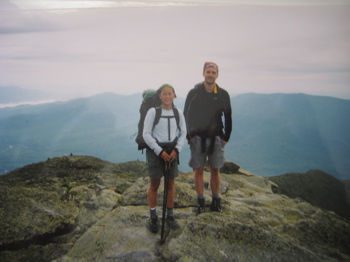 [Note: these pictures are pictures of pictures since my scanner hasn’t worked for about 5 years. They actually came out fairly well without my even trying.]

So yeah, you get it… Madison is the 5th highest peak east of the Rockies and north of the Smokies. And I’ve summited it four times by my recollection. But since according to CTMQ rules, nothing I’ve ever done exists before meeting Hoang, let’s say I’ve only stood on the peak once. (Though I’d like to mention I first climbed it at age 11 with a full pack in in pea soup fog conditions in 1984 thank you very much.) 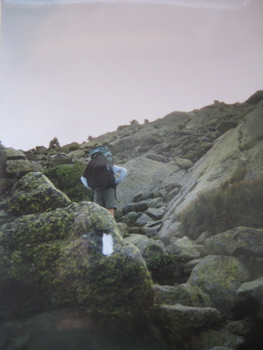 I’m really only writing this up to get some content for my NEHH (New England Hundred Highest) list section. Hoang and I climbed it during one of the best weeks of my life – when I convinced her that 5 days climbing in the White Mountains would be fun. She did awesome and the weather was pretty good most of the time and you know what? It WAS fun. No matter what she says.

The annoying part of peakbagging is that they don’t really count unless you stand on the true summits. (Our highpointing works the same way, of course.) So on my four hikes through the Whites, I’ve had to scour the maps to see which mountains we actually summited. That number is rather low I’m afraid… And aside from Washington and Madison, I’m a bit sketchy on the 12 or so others – actually, I’m more than sketchy, I’m sure I’ve only skirted the summits. Oh well, I guess I’ll just have to get up there again sometime. 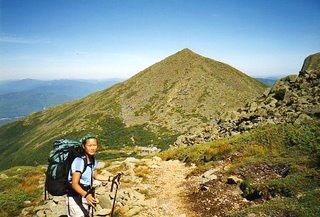 Madison, from the shoulder of Adams

But the Appalachian Trail actually DOES top out at the true Madison summit. Hoang and I stayed at Madison Hut down in the col between Madison and Adams – a beast of a climb that I distinctly recall staring up at all four times I’ve passed below the summit saying, “I’m glad 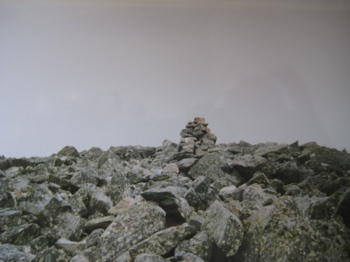 the trail I’m hiking doesn’t go up that.” (Adams is the second highest peak around, about 400 feet less than Washington.)

After a perfect weather day, we enjoyed a wonderful sunset behind Adams and had a rather silly night in the hut (chronicled here, in the Mount Washington report) but arose ready for the immediate climb up Madison. Unfortunately, the typical clouds had rolled in for our Madison day.

The climb looks daunting when you’re coming down Adams facing up to it. But the three times I’ve done it from the west, I’ve never felt it was too bad at all. (From the southeast at Pinkhan Notch, it’s a looooong slog up, but with some beautiful ridgeline hiking at least.) Note:
As with most White Mountain peaks, there are more than one trail to hike up it. I’ve only done the Appalachian Trail to Madison. 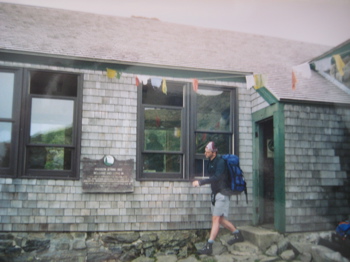 Since coming out of Madison Hut, the climb is the very first thing you do, Hoang and I were on top before we really knew what hit us. 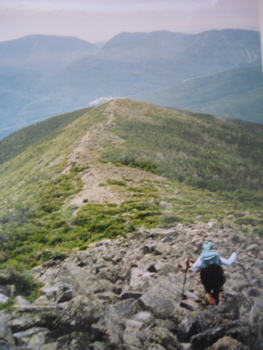 Hoang was elated because this was the last day of our journey and once on top of Madison, it’s nothing but down, down, down (as Hoang shows here, to the right) for almost 8 miles to Pinkham Notch – and our car.

I love Madison and I especially love Madison Hut. It’s the most remote hut and sitting in between Adams and Madison makes visitors feel so small in the grand scheme of things.

Will I summit Madison again for this particular list? Maybe… If only to get some better pictures. And by the way, mountains in the Presidential Range are named for U.S. presidents, with the tallest mountain â€” Mt. Washington â€” named for the first president, the second tallest â€” Mt. Adams â€” for the second president, and so on. However due to a surveying error, Mt. Monroe is actually 22 feet (6.7 m) taller than Mt. Madison, which is not the correct order of presidents.