This is the greatest museum not only in Connecticut, but in the world. I love Glastonbury’s Museum on the Green and all my readers must flock to it in droves and genuflect before the great brick building. Come… Drink the Green Kool-Aid. 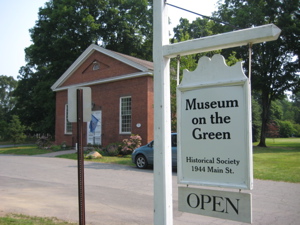 No? Okay, I’ll come clean; this is really just another little one-room town museum much like all the rest. BUT, it does have a rather unique name for some reason. One worth spending a couple paragraphs riffing on.

My first stop on a day-long museum-fest, the Museum on the Green had proven somewhat elusive in the past. Located in South Glastonbury off of Main Street, it looks more like one of those non-descript municipal buildings that dot the Connecticut landscape. Glastonbury is also a former hometown of yours truly, during those tumultuous post-college, pre-real job/marriage years. The ones I prefer to forget, for the most part. 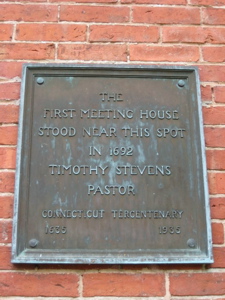 But it’s a lovely town, one that is highly regarded and formerly populated by the likes of Oprah sycophant Gayle King. There are acres of hillside orchards and rattlesnakes still live in a small pocket in town. But that’s today – I was here to learn about the history of the centrally located place and the people who started it all.

For an overview, I’ll let their site speak for itself:

The building that serves as our main museum was built between 1839 and 1840 as the Town House. It was built by Parley Bidwell, who probably designed it, as well…

It has been said that the Museum’s building was built of ballast bricks, possibly from North Africa. Because there was more than one brickyard in Glastonbury, this may be not be the case. 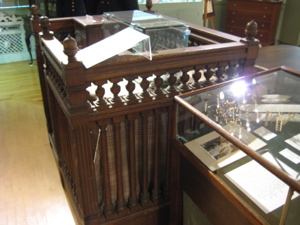 This building is the first secular Town Hall and served for 100 years. Before there was a separation of Church and State, the first Meeting House stood on this spot and served as both Church and Town House. The adjacent cemetery is from that church. The first school was also located on the Green. Livestock grazed on the Town Green and the Militia practiced here. There was a pig pound on the edge of the Green, keeping pigs out of the crops and preventing the damage they did.

A painting of Joseph Wright hangs near the entrance to the Museum. He was a Yale graduate, a farmer, a shad fisherman, and a Deacon of First Church where he started the first Sunday School. He owned a home on Wrighy’s Island (currently part of the Meadows), where he lived in the summer and raised potatoes, corn, and straw for brooms for his own family and for sale. His second home still stands on the corner Main Street and Meadow Lane. 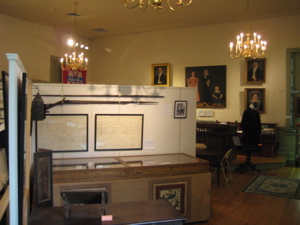 Joseph Wright kept complete and thorough diaries, noting changes in the river, local events of the 1800’s including harvest balls, sleigh rides, and sailing and steam ships. It is from Deacon Wright’s diaries that so much has been learned of Glastenbury during his lifetime. The original diaries, as well as transcripts, are kept at the Museum.

Hmm, okay. That didn’t exactly inspire… But that’s just the building. It’s what’s IN the building that counts! I was greeted by a middle-aged man in wire-rimmed glasses who asked the question: “Why are you here?” Fair enough… But since today was Open House Day, and everything was free, I had an easy out. He let me roam free and offered himself up for any questions. 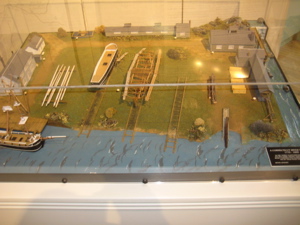 Up first: the shipyard diorama. As the Glastonbury Historical Society writes,

[The diorama] gives a sketch of how a ship was built. It is based on Roswell Hollister’s Log Landing Shipyard. Ships built at Glastonbury could not be large, ocean-going vessels because of the sandbar at the mouth of the Connecticut River. Smaller ships, used for trade along the coastlines and to Caribbean Islands, had shallower drafts and could pass over the sandbar.

Shipbuilding required supplies, and many industries grew up in Glastonbury to meet those needs. One of these was the South Glastonbury Anchor Works, later known as Pratt’s Forge. The anchor on the bottom shelf of the display case is an example of a small Pratt’s Forge anchor. The photographs show anchors as heavy as 3,900 pounds, which were also made at the Forge and shipped to New York for use on ocean going vessels. 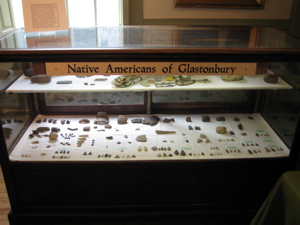 In the display case are many items used by sailors. The logbook is from the whaler, the Alert, and kept by Hezekiah Hale of Glastonbury. On each day a whale was killed, Hezekiah stamped a picture of a whale.

There is a display of old maps (which I love) and the requisite Native American Corner. Again, I’ll let them explain the display:

The Native Americans of Glastonbury were members of Algonkian-speaking tribes. They lived in clans of approximately100 individuals, each group ruled by a sachem. Clans took names from features of the land where they were centered. Naubucs lived in the Plains to the East, the flat area at the North End of town. Nayaugs lived near the Noisy Water, at the mouth of Roaring Brook. Wongonks lived at the Bend in the River, where the Connecticut River turned in the 1600’s. The tribes were peaceful and agricultural. 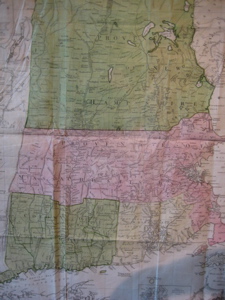 In the summer, clans lived along the river in Longhouses like the model on the table, made of saplings and bark or woven mats. In winter, they moved to the hills and lived in South- or West- facing caves. The artifacts from the Phillips Dig were found in such a cave in East Glastonbury. The cases contain many examples of stone implements and clay pottery created by the tribes, as well as contact material; items which were probably received in trade from colonists who settled in the area.

Note the pottery along the back of the bottom shelf. The oldest piece was made between 1,000 and 1 BC. On the right of the top shelf is a soapstone dish. It is very rare that one is found whole. Dishes carved from soapstone were used before Native Americans learned to make clay pottery. 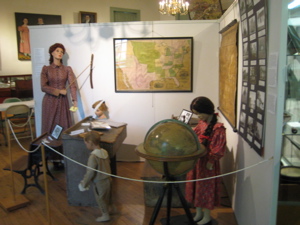 Neat. I have been out to a Native American soapstone quarry in People’s Forest in Barkhamsted. My, the GHS website is incredibly thorough in its explanations of the museum’s exhibits. I better start editing heavily. Let’s move up to the Colonial days:

Glastonbury was purchased from the sachem, Sowheag, and his clan in 1636 for 12 yards of trading cloth. In 1639, surveyors laid out 34 strips of land running 6 miles north to south and 3 miles from the river into the wilderness… This was the First Survey in Connecticut. An interpretation of it hangs on the wall over the display case. For 50 years, this land was known as Naubuc Farms and was part of Wethersfield. In 1650, the General Court granted permission to form a militia. In 1673, an additional four miles to the east, known as East Farms, was purchased. The 34 households living in this area built a Meeting House on the site of this Museum and hired Timothy Stevens as a minister. Permission was granted to them in 1690 to form a town, and in 1693, Glassenbury was incorporated. 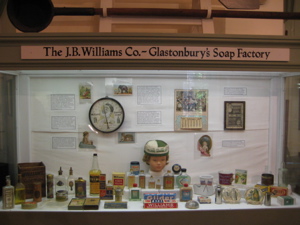 It was apparently called “Glassenbury” and “Glastenbury” at different points as well. There are also some totally random old things here. “The spoon mold, dating from 1710, is one of the oldest known American made spoon molds still in existence.” And, “A sample of the wallpaper in the photo is beside it. It was the first wallpaper in Glastonbury, imported from England in 1738. The leaded window glass is from the Talcott house and is one of a very few examples of Colonial leaded glass known to exist.”

Good stuff. There is a large section devoted to early industry (shipbuilding, mills, farms, etc) but this bit bears mentioning:

Glassenbury Glass Works was located in the Wassuc section, south of Buck’s Corners on New London Turnpike near the entrance to Route 2. The industry was started in 1816 as a spin-off of the Pitkin Glass Factory in Manchester. It closed in 1830. Examples of its products are in the case. 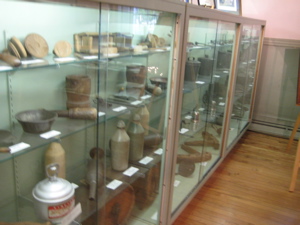 Ah, yes. The ol’ Pitkin Glass Factory! I’ve been there! The JB Williams Soap Company was also started here back in 1840. Never heard of it? Well, shame on you for it is believed to be the first commercial soap manufacturing business in the world. Although shaving soap was their first product, they also made ink and shoe blacking. Products made by the J.B. Williams Company included Williams ‘Lectric Shave and Aqua Velva! I find that kind of funny for some dumb reason.

Man, the GHS website is massively informational – I am only skimming the surface here with my quotations. I’d skip over the Civil War displays, but then I’d be skipping Glastonbury’s most famous son: Gideon Welles. Welles served as Secretary of the Navy in the Cabinet of Abraham Lincoln. He is considered the Father of the Modern Navy and is responsible for the development of Iron Clad ships. 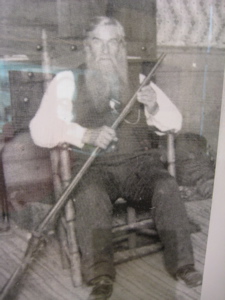 Gideon Welles was a Glastonbury Tax Gatherer, editor of the Hartford Times, representative to the State Legislature from Hartford, and Hartford Postmaster. President Abraham Lincoln became aware of Gideon Welles through his newspaper articles. An early supporter of Lincoln, Welles knew he would be asked to serve in Lincoln’s cabinet and hoped to serve as Postmaster General. Because of Welles’ shipbuilding knowledge, Lincoln named him Secretary of the Navy. Gideon Welles served under Presidents Lincoln and Johnson from 1861 until 1869. It is said that he and Admiral Farragut planned the Battle of Mobile Bay on the front porch of the Welles Home on Hebron Avenue.

There are displays about local feldspar mining and the hugely successful Hale Farms. The latter story is really quite interesting but my report is already far too long. I’ll condense the story: In 1866, John Howard Hale and his brother, George, planted their first strawberries on a sandy hillside on the family’s 200-year-old farm. They borrowed a push cart from a neighbor, which they later purchased for $1, and had modest success selling their berries from it. They worked really hard and then found an old peach tree that still bore fruit. The planted more and just before their creditors were about to take their land, they hit paydirt and made a peach profit. 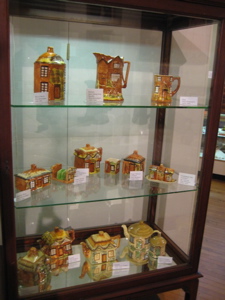 They became quite rich and led the way for peach hybridization and production. The same sort of story also applies to a chicken farmer from town, Frank Saglio, who started Arbor Acres. Other successful business from town included a tannery and Frank “Bert” Harriman is acknowledged as a forerunner of modern aviation.

His story is an amazing one – he built his own seaplane and bi-planes and tri-planes and flew them around town around the same time the Wright Brothers were applying their trade. Contracts were agreed upon with the Navy and other countries, but never materialized. It’s a plum crazy story, but Harriman invented many things during his lifetime and again, you should really read up on the man.

There’s more! In 1846, Frederick and Joseph Curtis built the first factory for making Britanniaware or “German Silver” in the United States. This is a white metal which is+ an alloy of copper, zinc, and nickel. 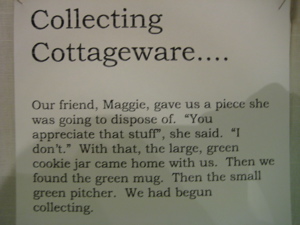 There’s a bit about the Smith Sisters. Their former home is on the Connecticut Underground Railroad and is a National Historic Landmark.

Wow! What a fact packed little museum! I’m on overload, so I’ll end it here… And drink some more green Kool-Aid – but before I do, I must mention that it being Open House Day, I was given two little booklets. One is a self guided tour of Glastonbury’s Main Street and the other is one titled, “Trees of interest on Main Street.” Both are excellently written and provided me several minutes of interesting reading while waiting for the nearby oldest continuously operating ferry in the country that I was off to next. 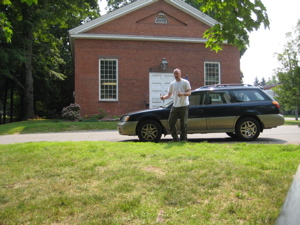 The Historical Society of Glastonbury