With Damian in the midst of a week long “Winter Break” from preschool, I can take him wherever I darn well please. Today, it was Sessions Woods Nature Center; the only nature center I’m aware of in Connecticut that is closed on weekends. It should also be noted that their web presence is abysmal (in 2009 anyway). 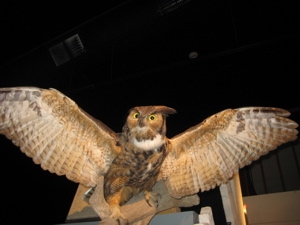 I don’t know where the name “Sessions Woods” came from, but it is rather stilted. I’d been here a few times prior to this visit. Twice I parked in their lot for a couple Tunxis Trail hikes as the trail passes through their land. I went orienteering there years ago. I’ve attended a couple meetings there about our blue trails and forest management. But now I had Damian and a camera. NOW it would be for real. 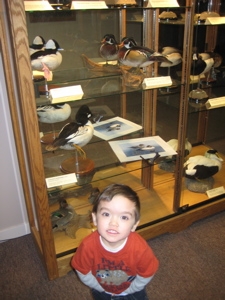 The Wildlife Division of the state Department of Environmental Protection established the Sessions Woods Wildlife Management Area (WMA) in Burlington. The purchase was made possible with the help of sportsmen-generated Federal Aid in Wildlife Restoration funds. More than just a tract of natural land set aside for wildlife, Sessions Woods WMA introduces visitors to wildlife and natural resources management through various educational programs, demonstration sites, self-guided hiking trails, and displays. Visitors will develop a better understanding of the Wildlife Division’s role in managing Connecticut’s wildlife populations, as well as learn about what they can do to have a positive impact on the future of Connecticut’s wildlife and other natural resources.

Sessions Woods WMA focuses on conservation education, with facilities to bring school groups, the general public and natural resource professionals from throughout Connecticut and the region to participate in educational programs, demonstrations, and workshops pertaining to wildlife and natural resource management. These facilities include an education center with an exhibit area and a large meeting room, as well as interpretive trails, habitat management demonstration areas, and a backyard wildlife habitat area. Sessions Woods WMA offers conservation education programming that uses the expertise of Wildlife Division and other DEP natural resource management staff. 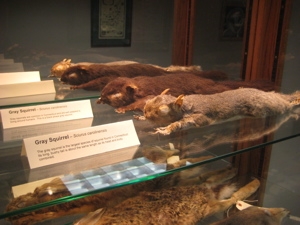 The only good squirrel is a dead squirrel

That information was from the Sessions website… I never write two such informative paragraphs in a row. Since it was about 10 degrees outside and all the trails were covered with ice and snow, we’ll focus on the indoor “education center” as they call it. I call it a nature museum – and a darn good one at that. 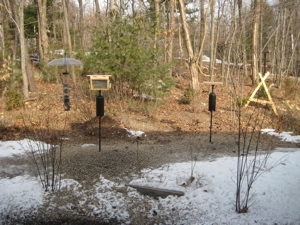 Even before entering the large exhibit area, Damian and I checked out the display cases out in the hallway. There are several taxidermy cases and a skull/skeleton one filled with pretty much every bird and rodent one might find here in central Connecticut. 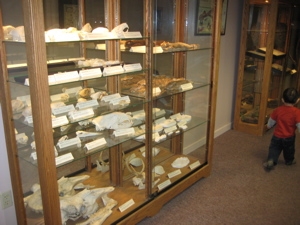 Please excuse Damian’s hands-down-pants poses. He doesn’t yet know that that is reserved for watching TV on the couch. Also, you may notice (yet again) that he points with his middle finger. He’s been doing it since he learned to point and still does it all the time. I don’t know if its some quirk of his genetic anomaly or if it’s just my clown son being unique again.

After the hallway we entered the very large exhibit area. It’s almost too large, as an entire corner and balcony area were currently unused – though it looked as though that would be changing soon with some new displays. 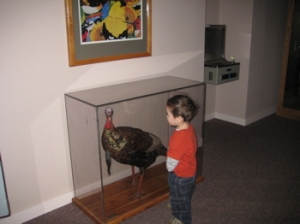 Hello Turkey. Say ‘Hello’ to your mother for me.

The way Damian flits about willy-nilly has clouded my memory with how the displays are presented, because I experienced them so piecemeal. But I will try. Starting with our favorite… 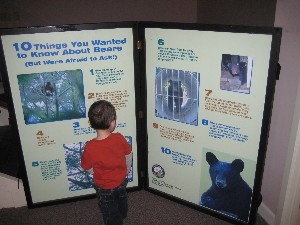 BEARS! Ah, yes, Bears! Black bears, of course, as that’s what we have here in Connecticut. There is an excellently informative display here about bears: 10 Things You Wanted to Know About Bears (But Were Afraid to Ask).

I wonder who is afraid to ask about bears? Notable is their number 10 factoid: 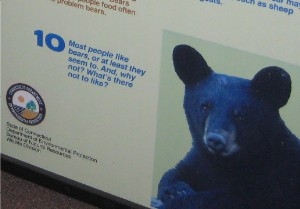 Oh REALLY?! Even though they are Godless Killing Machines? Someone alert Colbert to this Bear Propaganda. Even Damian looked up warily at the two bears lording over the room: 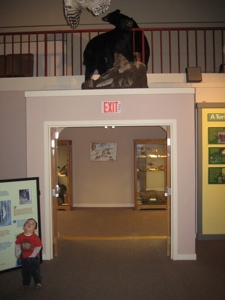 As one last nod to Stephen Colbert, “Moving on…” Yes, moving on to the other displays around the room. Right across from the bears is a large display about our wild turkeys. I can attest that Connecticut has a thriving turkey population, bordering on excessive. In fact, though I can’t find the article anymore, there was a story here in my hometown of a rafter of turkeys – yes, a group of turkeys is called a rafter – attacked a mailman and kept him from his appointed rounds about a mile from my house. 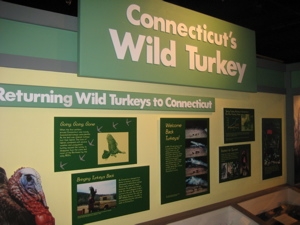 By the way, baby turkeys are called “poults.” So chicks and poults are different but both grow up to be poultry. Hm.

Sessions Woods has a cool little diorama showing how state biologists use rocket nets to capture the birds. In my vast experience encountering them in the woods here, I can attest that capturing them must be difficult. 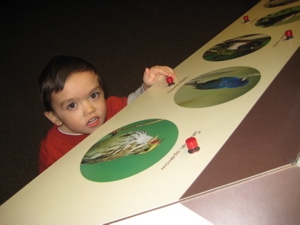 There is another informative display all about wild animal scat. Large high-quality pictures of various scat. I often encounter scat on my hikes and often wonder from whence it came. I’m most interested in rare scat – like bobcat and moose for instance. 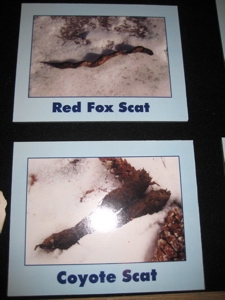 There are some very nicely presented stuffed animals here. A bobcat, a beaver, a doe, a deer, a female deer… We cruised by the large window to view the birds feeding outside for a while and then turned our attention to some of the more educational displays. 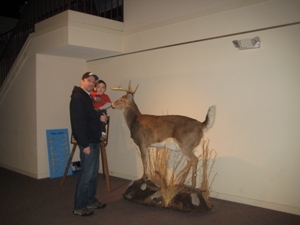 I was impressed with the information on forest succession. I still haven’t landed on a firm opinion of forest management techniques and this didn’t really sway me one way or another, but it’s always interesting to learn about how much of a science true forestry can be. 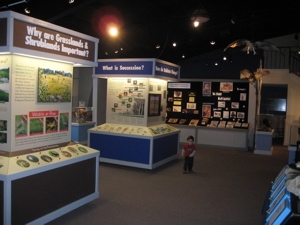 The display also discusses the various niches and which animals thrive in them and why. There wasn’t too much about Connecticut’s trend towards development and destruction, but it was certainly implied via the bear and coyote displays.

Ah yes, coyotes. Do we have too many or too few? Kitten owners and chicken farmers would say that one is too many. Attacked-by-turkey mailmen would say too few. Let’s take a coyote quiz: 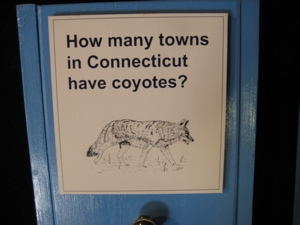 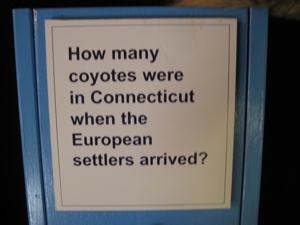 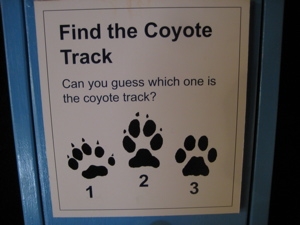 Bonus question – Name all three tracks above and win a prize. (Answers at bottom).

A large kiosk with buttons that allowed Damian to press and hear various bird songs was a hit. I particularly liked the Woodcock mating ritual exhibit. I’ve yet to see one in the wild – let alone one courting – so this was pretty cool. Apparently the sound the males make while trying to attract females is called a “peent.” So yeah, woodcocks peent. Go figure. 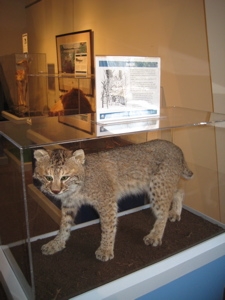 There is a little side room here with activity tables and items to touch and “play” with. Actually, I’m not sure “play” is the operative word, but it is for us.

So what’s the poop on this room? Why… More poop! 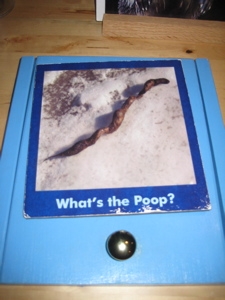 Give up? Red Fox again… didn’t you learn anything a minute ago? Sheesh. (There must be a surplus of red fox scat in Burlington.)

There are tons of boxes and containers filled with cool things to check out here. All sorts of feathers and track casts and bugs and furs and pelts. As I placed a dead coyote around my neck like a stole, I was struck by the fact that women of a certain class actually wear things like this as fashion. I’m not sure it’s a look even Hoang could pull off. But Damian seems to enjoy it: 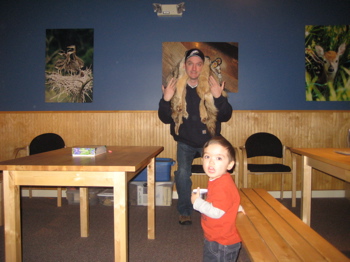 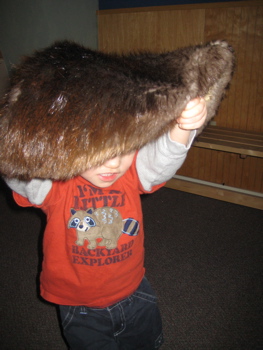 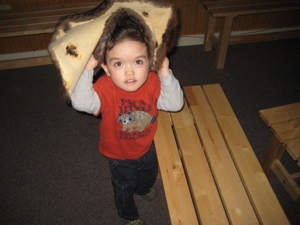 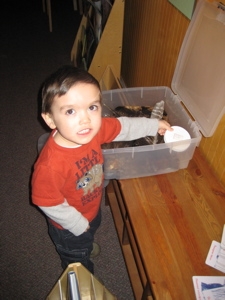 After leaving the activity room, Damian felt the need to wander every inch of the building. There are a bunch of offices here, of course, but also a large meeting room. After gathering up some brochures to read at his leisure, Damian decided it was a good time to kick back and relax to read up on the state of Connecticut’s deer culling program. 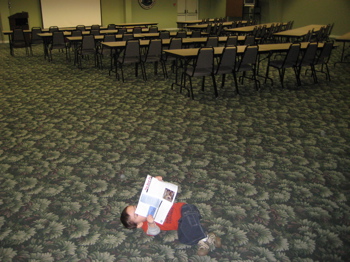 We had great fun inside, but our time there was done and it was time to check out some of the frozen grounds outside.

As I said earlier, it was far too cold to walk around too much, but we tried. Demonstrations of wildlife and habitat management practices are featured along the Beaver Pond Trail, Deer Sign Trail, and in the Backyard Habitat Demonstration Area. 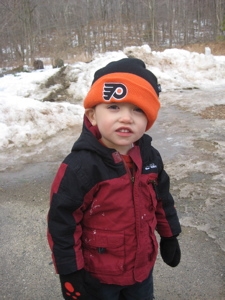 Most of that stuff isn’t worth checking out in the dead of winter anyway. But we trudged along the side of the building to the garden area and Damian had great fun “slippy sliding” on the ice patches. As we made our way along slowly, a family (Mom, Grandma, 2 kids) joined us on their way to a real hike. Um, really? 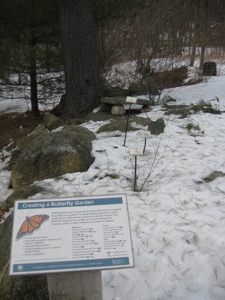 The trails were complete ice and snow and these people had on sneakers. And Grandma was, you know, a grandma. One step off the plowed walkway and they turned tail. I don’t know what they were thinking. 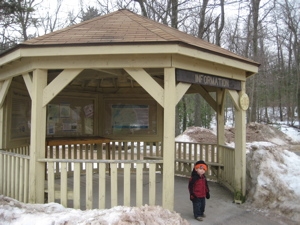 The land here is really cool and there are interpretive signs throughout the wildlife management area. There are some pictures in the links below but as I always do, I recommend you get out there yourowndarnselves to check it out.

Answers: All 169 towns have coyotes! There were NO coyotes here back in the day. 1. Fisher 2. Coyote 3. Bobcat 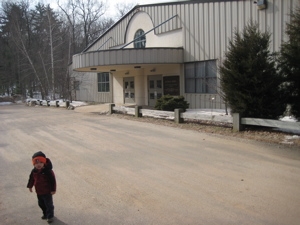