One of my good friends grew up in North Stamford and over the many years of writing CTMQ, she has asked once or twice if I’d been to Bartlett Aboretum yet. She hasn’t lived in the US for over a decade but this place was very close to her childhood home and I think it’s sentimental to her. For me, it’s Brandywine Creek State Park in northern Delaware. For her, it’s Bartlett. We all have our place. 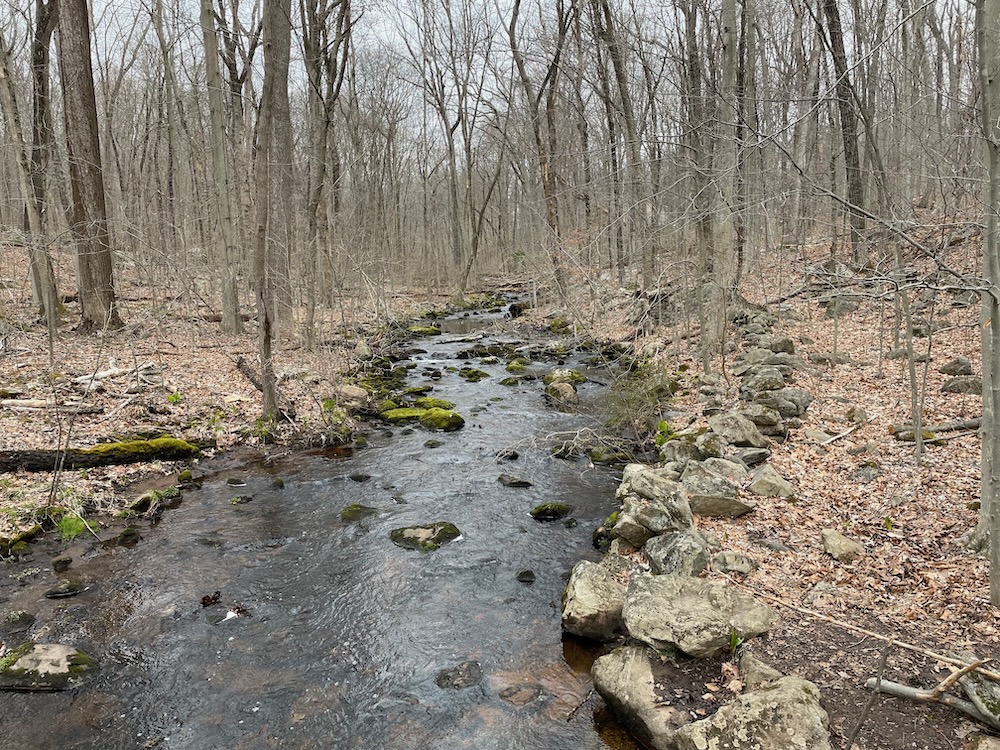 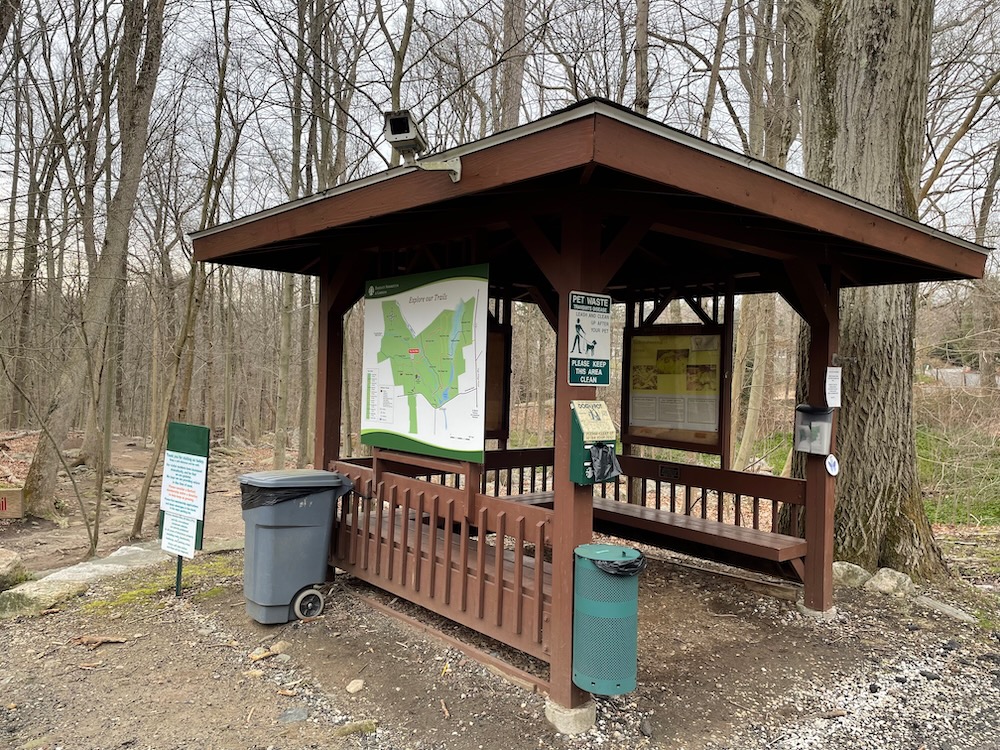 And you can do worse than this place. Squished into North Stamford’s mansions closer to Bedford, NY than Long Island Sound, it’s a miracle this place even exists. And it’s not super tiny either, at 93 acres.

Okay, that doesn’t sound that large, but when you consider the price of land in lower Fairfield County, 93 acres of protected woodland is pretty impressive.

In 1913, Francis A. Bartlett, a well known dendrologist acquired 30 acres of North Stamford woodlands to use as his residence. Oh sure, you laugh… as if there is even such a thing as a “well known dendrologist.” Well, Bartlett started his training school and research laboratory on his 30 acres and founded a little company called Bartlett Tree Experts. You’ve likely heard of them, as they now have over 100 offices worldwide and are considered one of the top businesses in the industry. (But no, Francis Bartlett had nothing to do with Bartlett pears. 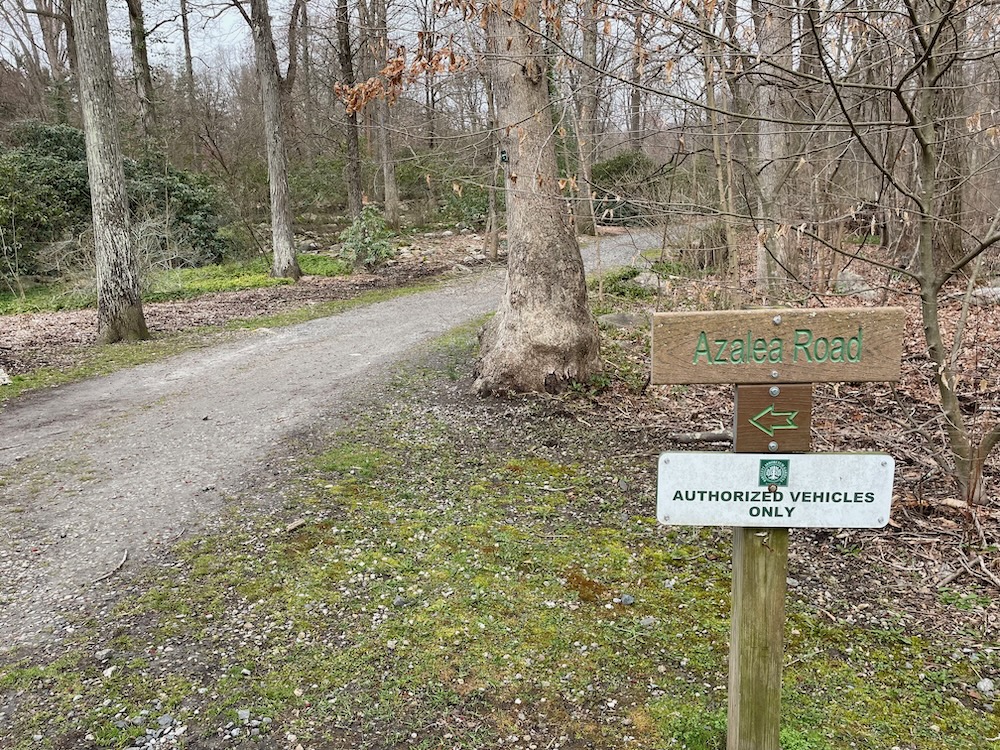 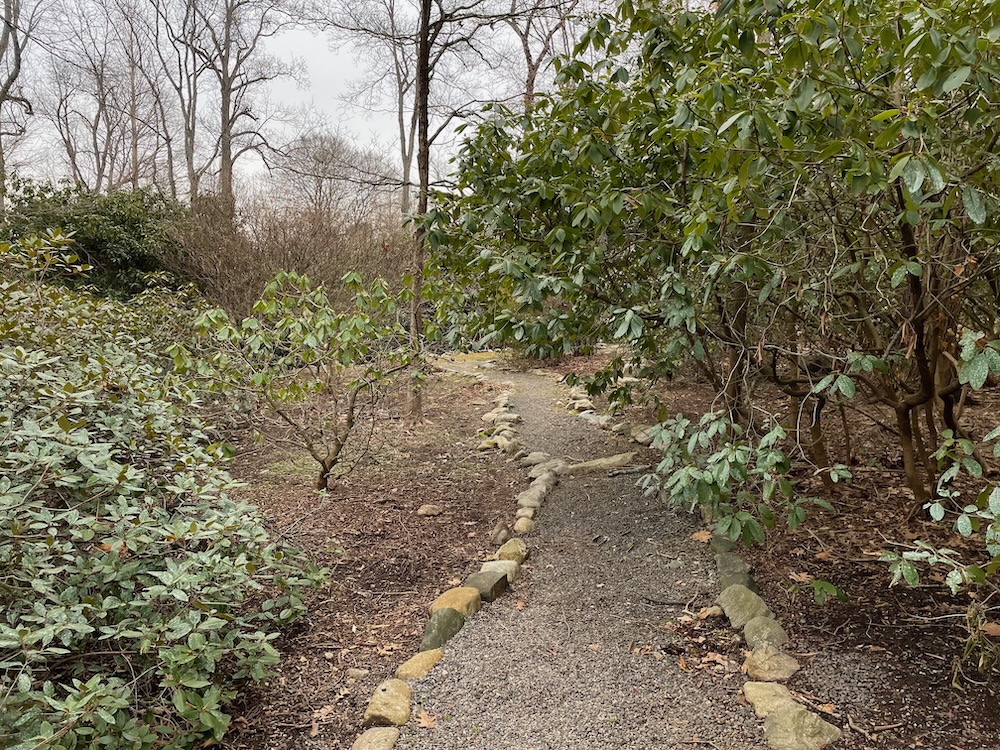 (But the Bartlett pear name is kind of funny in an “American Exceptionalism” kind of way. In 1799 some guy named James Carter imported several Williams pear trees into the United States, and they were planted on the grounds of Thomas Brewer in Roxbury, Massachusetts. The Williams pear had been around for centuries in Europe. The Massachusetts estate was later acquired by Enoch Bartlett of Dorchester. Unaware of their origin, Bartlett named the pears after himself and introduced the variety into the United States. It was not realized that Bartlett and Williams Pears were the same until 1828, when new trees arrived from Europe, but whatever. Bartlett pears they are.)

Back to our 20th century Bartlett; over the years he assembled a large number of woody plant specimens on the property from all over the world in particular from North America, Europe and Asia. By 1965, Mr. Bartlett’s research laboratory had moved to North Carolina and his Stamford home, which then covered some 64 acres, was purchased by the State of Connecticut in 1965 and opened to the public in 1966. The property was the State Arboretum for a bit, then it was transferred around to various gatekeepers when finally, in 2002, it was acquired by Stamford and gained some more acreage. 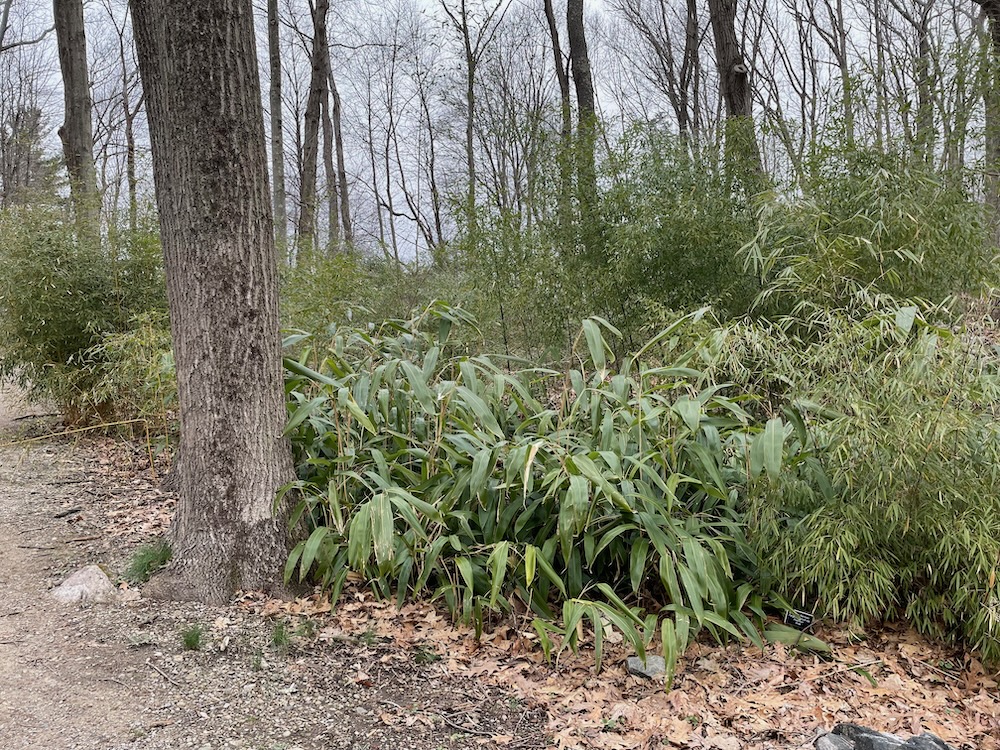 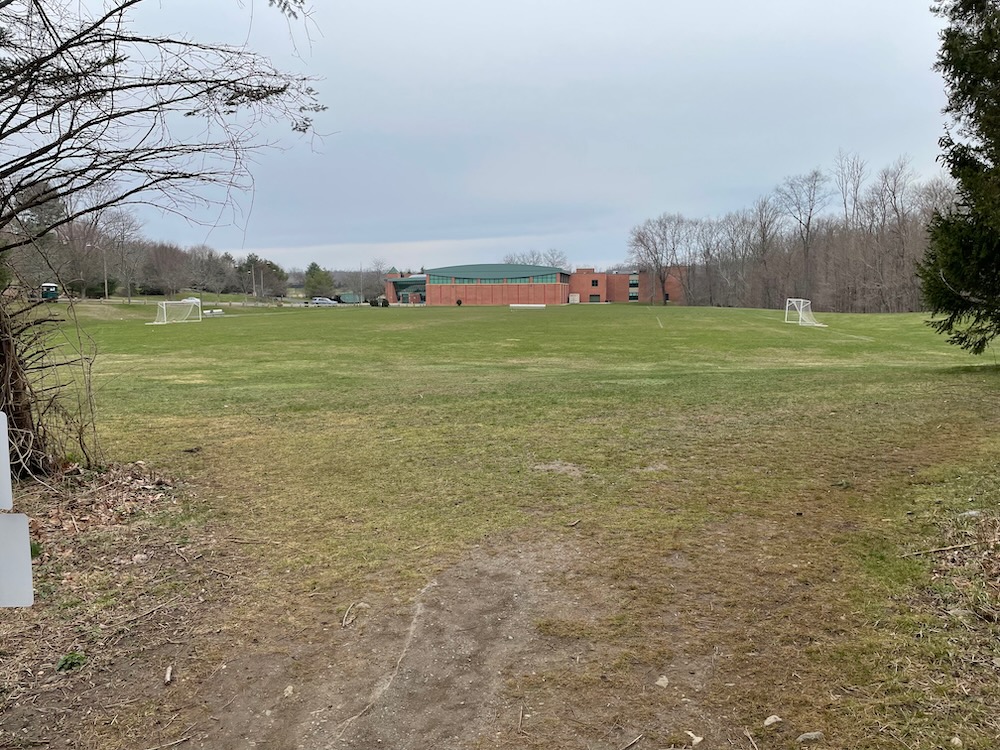 Which brings us to today. I visited on a drizzly Sunday morning in April and more or less had the place to myself. There are a bunch of trails to walk – too many, actually – and many gardens to enjoy. Let’s get going already.

I drove in to the more central and large parking lot and set out on the western loop first. Right down Azalea Road. When these plants are in bloom, this short and easy walk must be stunning. I poked around the Mehlquist Gardens here. There are many paths spoked off of the main trail that weave their way through the gardens. 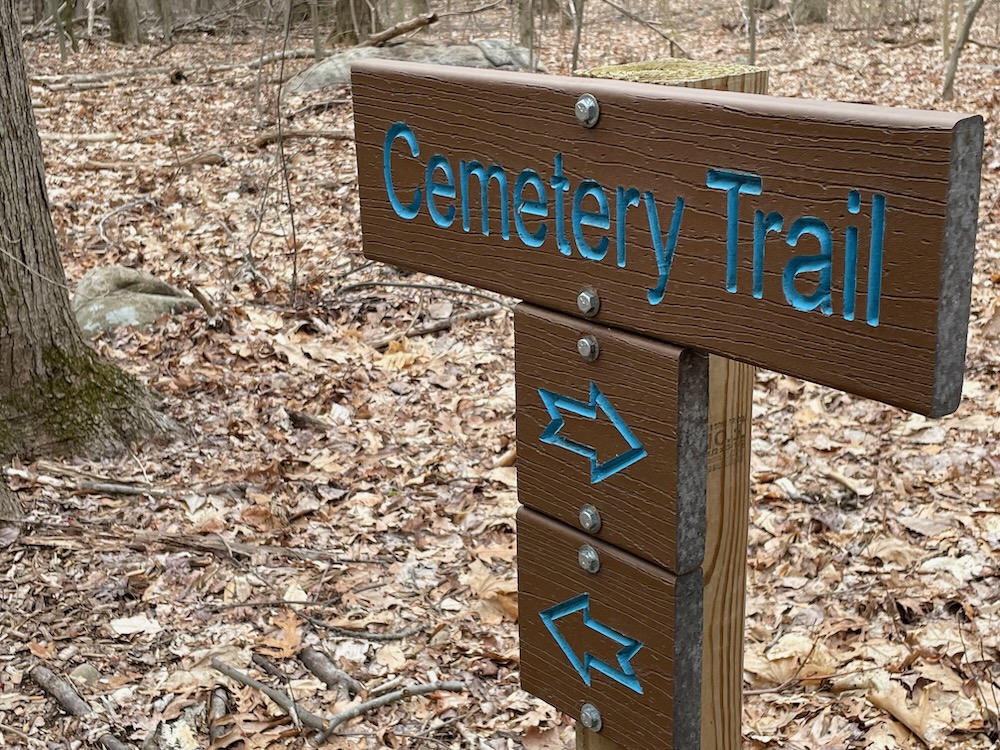 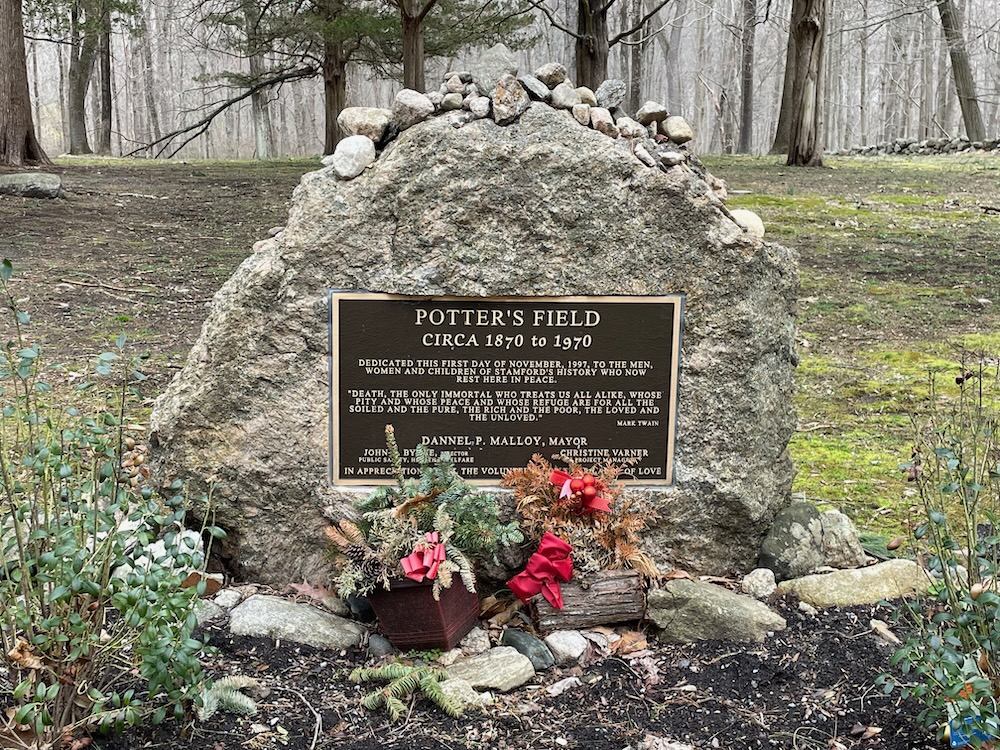 Dr. Gustav Mehlquist is credited with developing hardy high quality rhododendrons and azaleas, but the garden is also home to Highbush Blueberries, Japanese Andromeda, Enkianthus, and Mountain Laurel, the Connecticut state flower, under the canopy of several hardwood trees. It’s a highlight of the entire property.

I made my way to the western end of the park which brought me out to a middle school. A quick crossover and I was heading back to the parking lot on the Cemetery Trail. 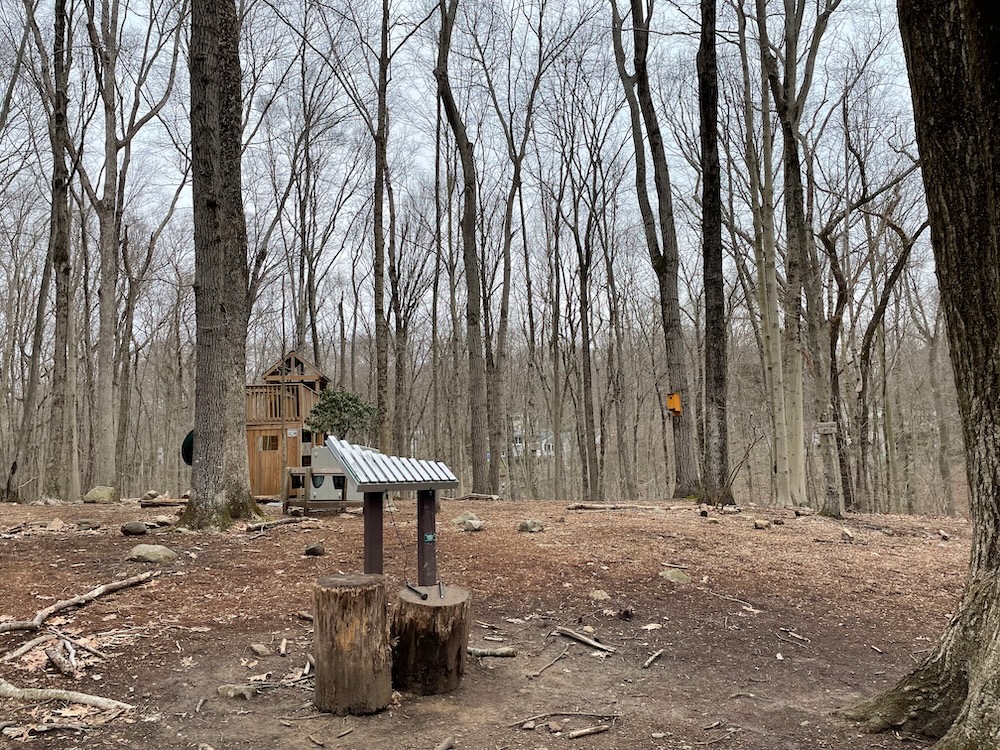 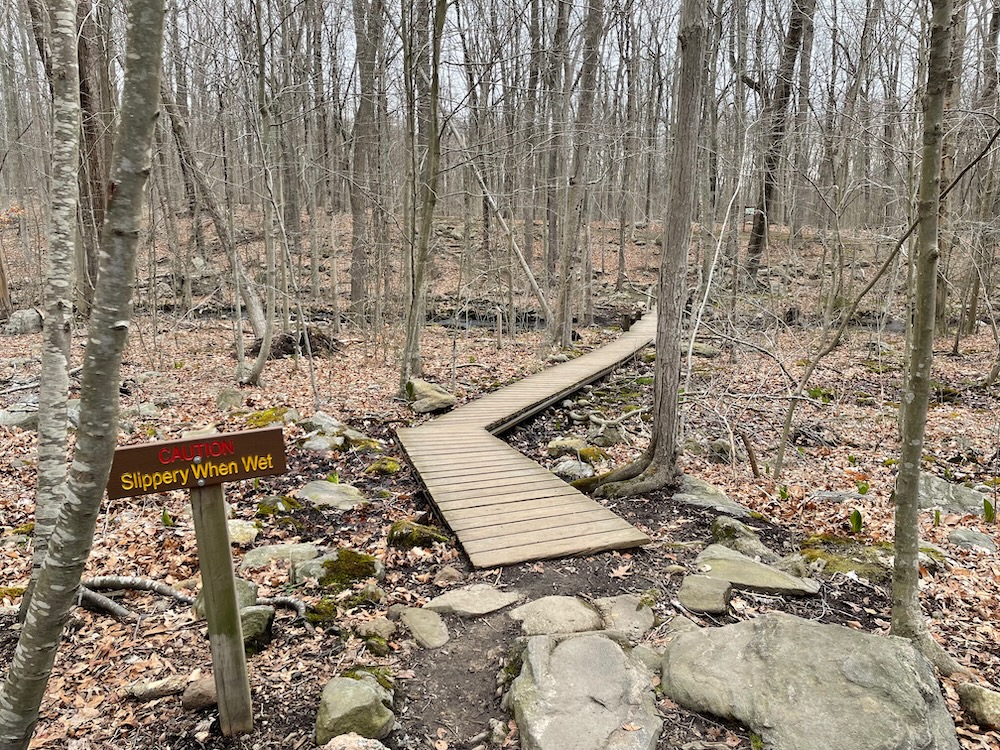 The trail gets its name from Potter’s Field, where Stamford’s indigent were buried for a century until 1970. Since the 1990s, a group of interested volunteers have been uncovering grave markers – small concrete blocks marked with numbers – and studying the history and identification of those buried here. An effort was led in 1997 to clear and help restore the grounds that had fallen into neglect since the cemetery’s closure.

That’s nice. What I was noticing is now that I wasn’t on “Azalea Road” but rather a more trail-like trail, is that the trails here suffer from overuse and a lack of… I don’t know… control?

The paths are often deeply rutted and eroded; corners have been cut and wet areas avoided, leading to 10-foot wide trails in places. The Arboretum is overseen mostly by volunteers, and getting this problem under control is nearly impossible. Really, the only way to begin fixing the issue is complete trail closures, and that’s going to be really, really tough here. 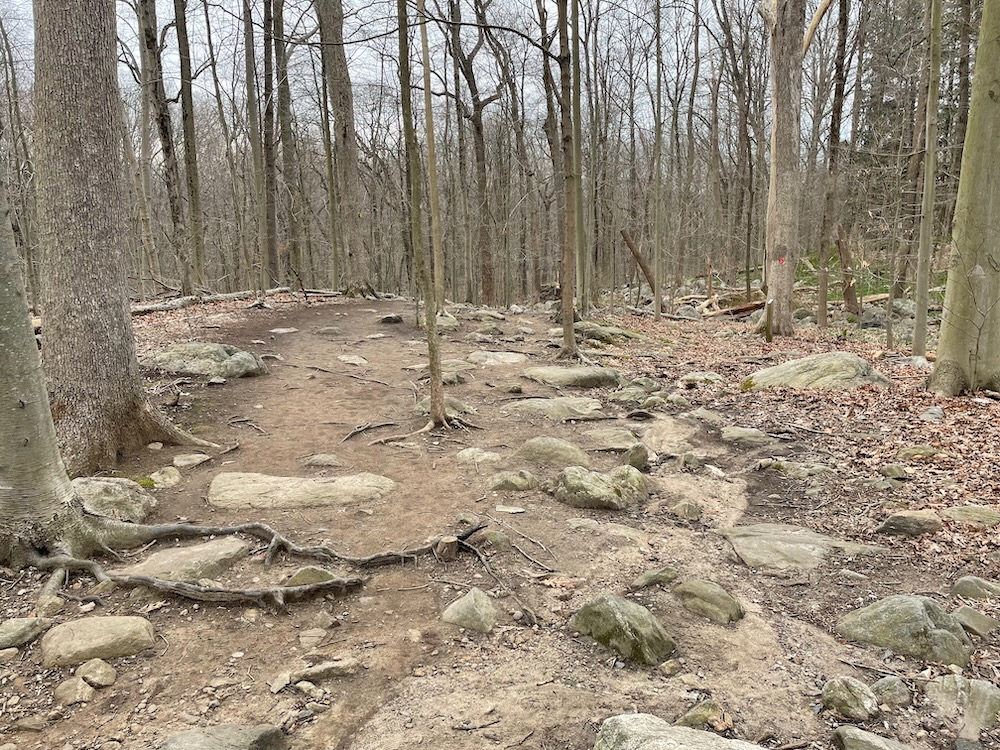 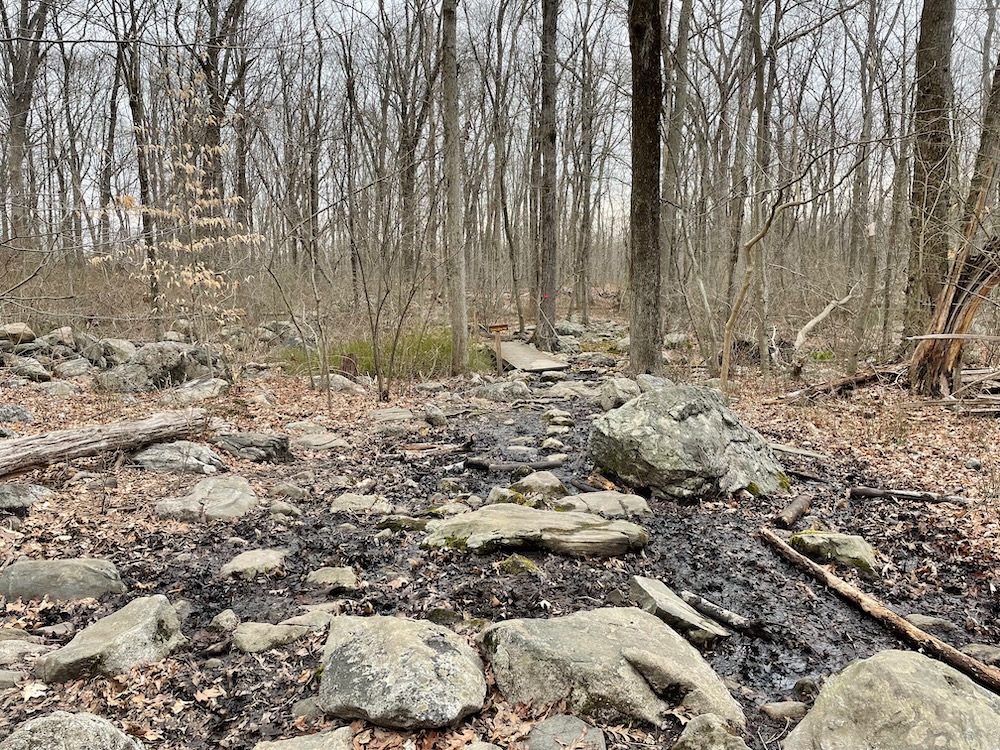 The Cemetery Trail takes kids to a woodland playscape. How are you going to close that?

Across the parking lot and into the eastern section of the arboretum. There are half a dozen different trails here, all signed and blazed well. Erosion and over- and misuse are prevalent issues over here as well. 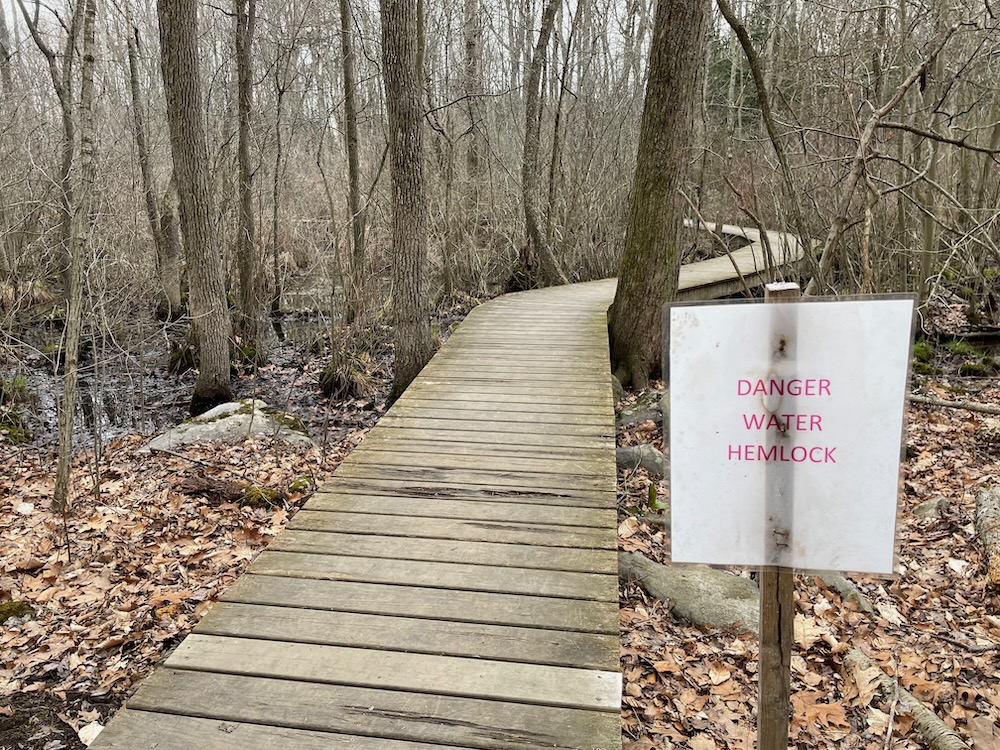 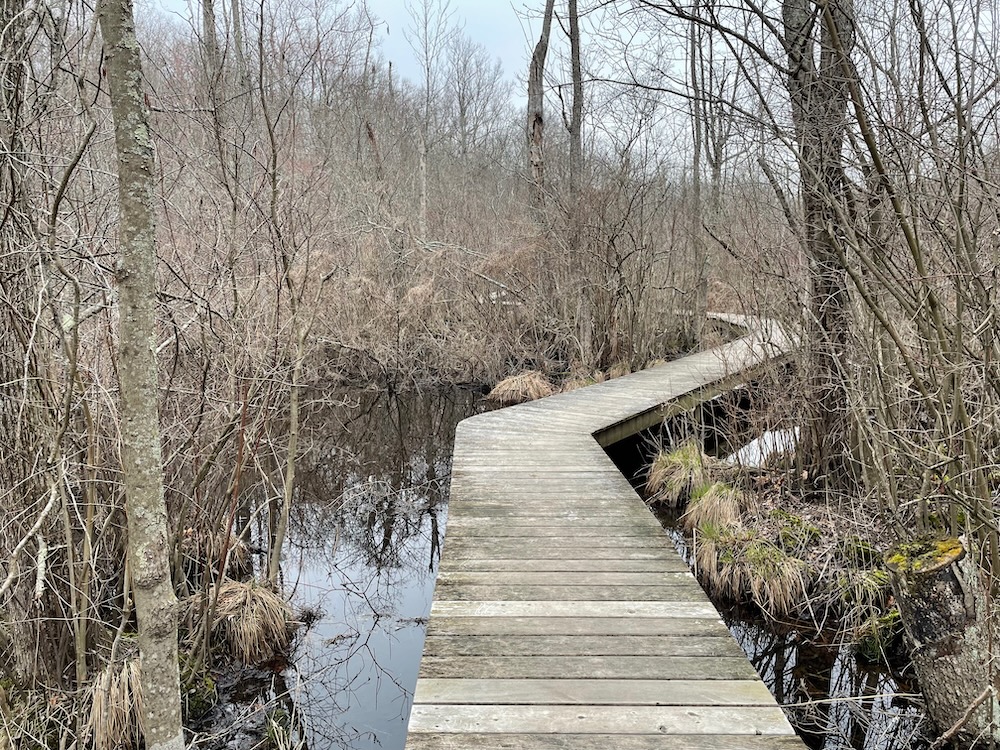 I walked the Red Oak Trail to the Tulip Tree Trail to the Wetland Loop. The first two are standard woodland trails that took me to edge of the property (again). But the Wetland Walk included a rather impressive boardwalk across a lively marsh.

After the boardwalks, I headed through a hemlock grove on the Hemlock Trail, swung around to the Black Birch Trail – again, right up against a large home’s back yard, took down the Pond Trail, now at the eastern end of the Arboretum across the street from yes, yet another large house – here, I’ll just show you one: 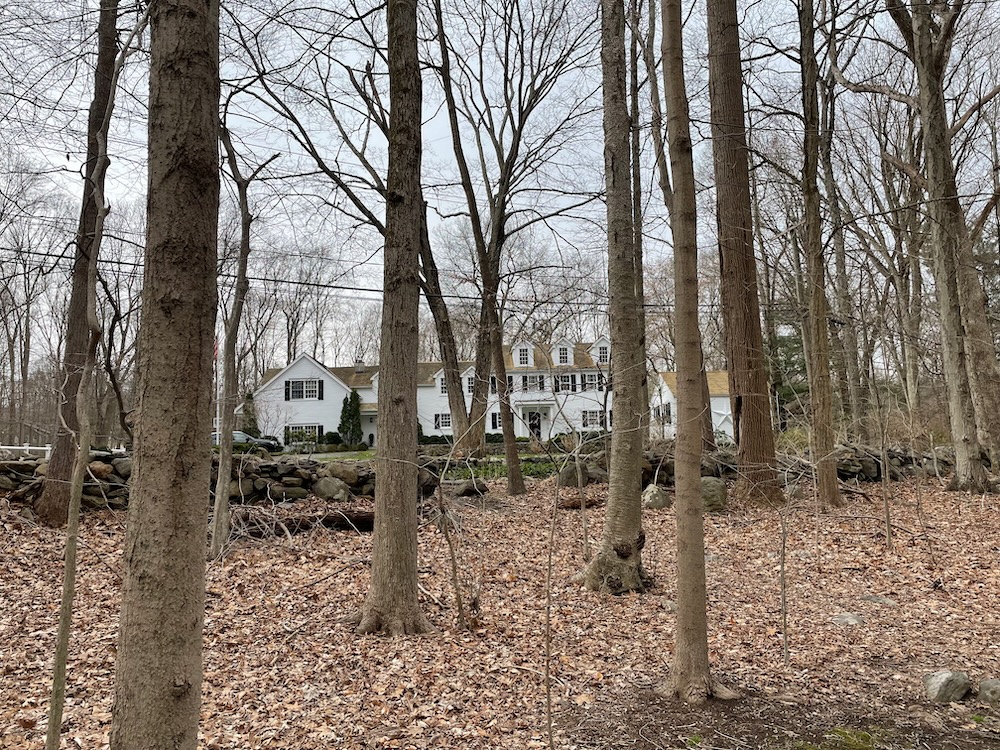 This isn’t a unique thing at all, as many, many trails skirt expensive homes all over the state. There’s just something a little different here because the whole place is hemmed in by them. Well, except for the middle school I guess.

After passing the little pond, I headed up the Brook Trail to ultimately rejoin the Red Oak Trail which took me back to my car. As I’ve said, the trails are well marked and there are kiosks all over the place, so even the most directionally challenged person will be fine here. The issue is trail erosion and all the cut-corners and such. I hope the Arboretum can get a handle on it somehow, someday, because in about ten years it’s going to be a real mess in places. 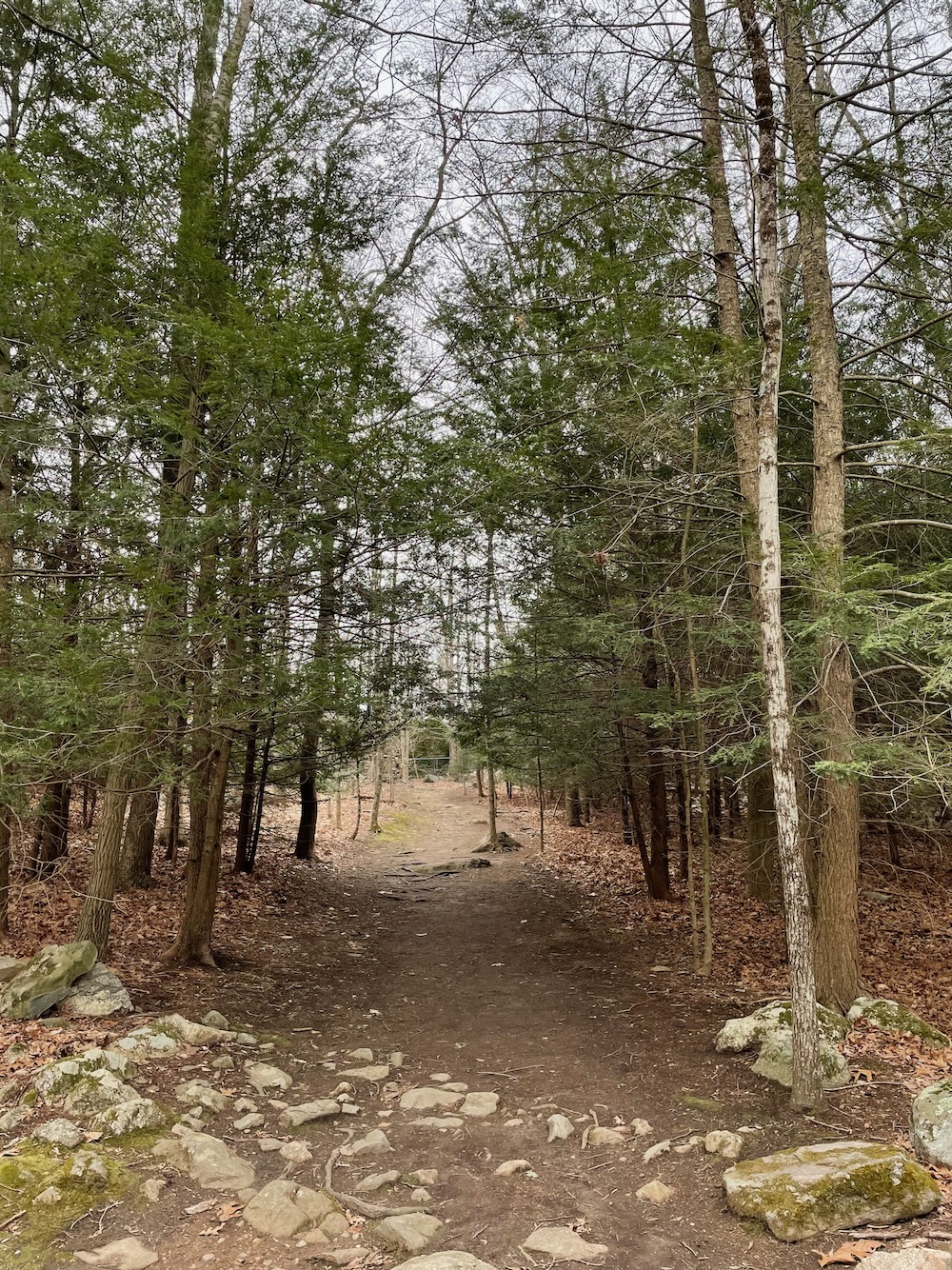 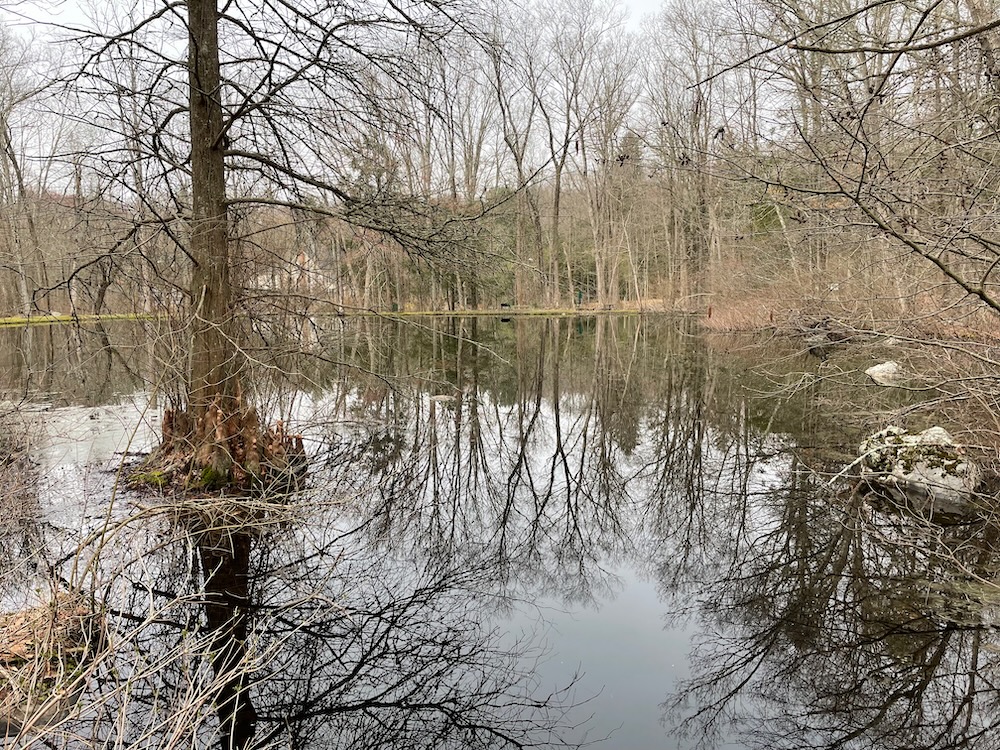 I went to check out some of the gardens before taking off. There are several and they’re all impressive. Some highlights include a vegetable and fruit garden, the Jane B. Heisinger Wildflower Garden, the Kate and Robert Bartlett, Jr. Magnolia Collection, the Nut Tree Collection, the Witches’ Broom Collection, a large Herb Garden with over 100 species, a really cool Fern Collection, and a Pinetum. There’s also a large dwarf conifer collection that has been allowed to expand beyond its original plot and now, decades later, the Arboretum hopes that it will become a reference garden for dwarf conifer fans from all over the world. 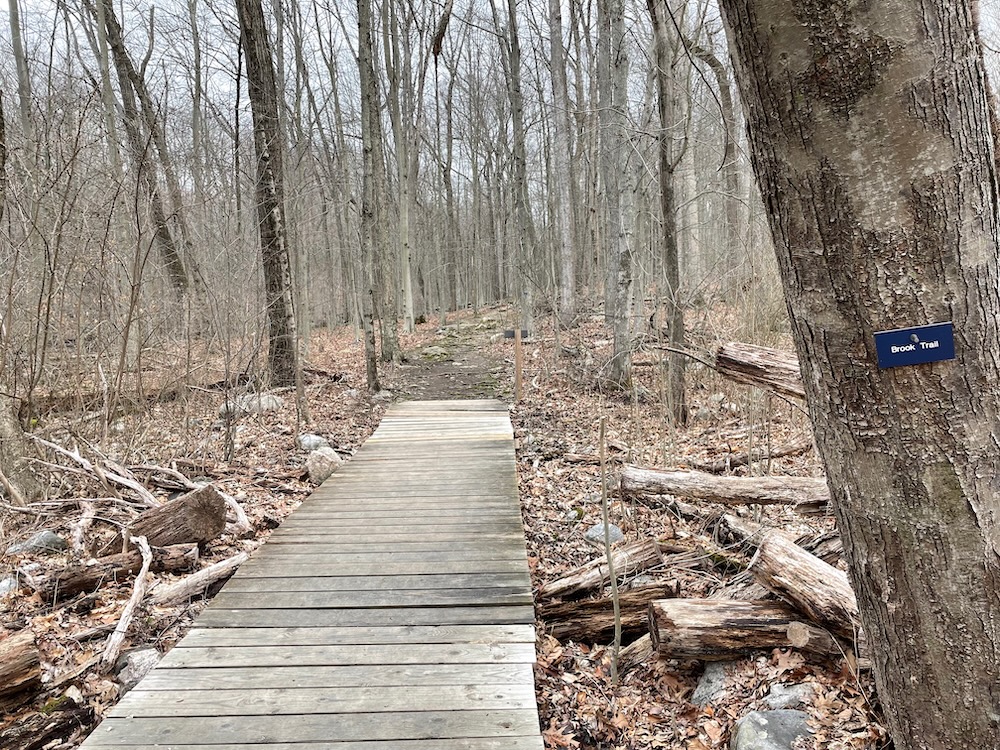 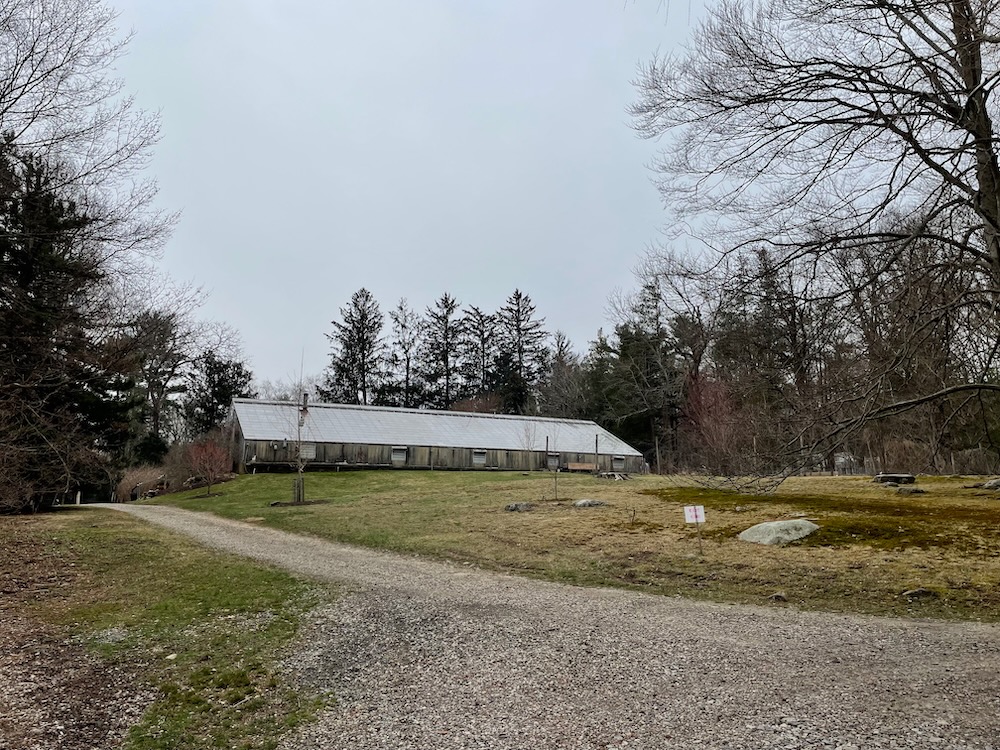 The Arboretum and gardens are still used for study and experimentation, just as the property’s namesake would want it. The whole joint is free and there’s an “educational center” that is probably worth checking out when it’s open.

The trails and gardens here provide a nice escape from the hustle and bustle of Stamford and I’m sure the residents appreciate it. Heck, I’m not from here and I appreciate it. 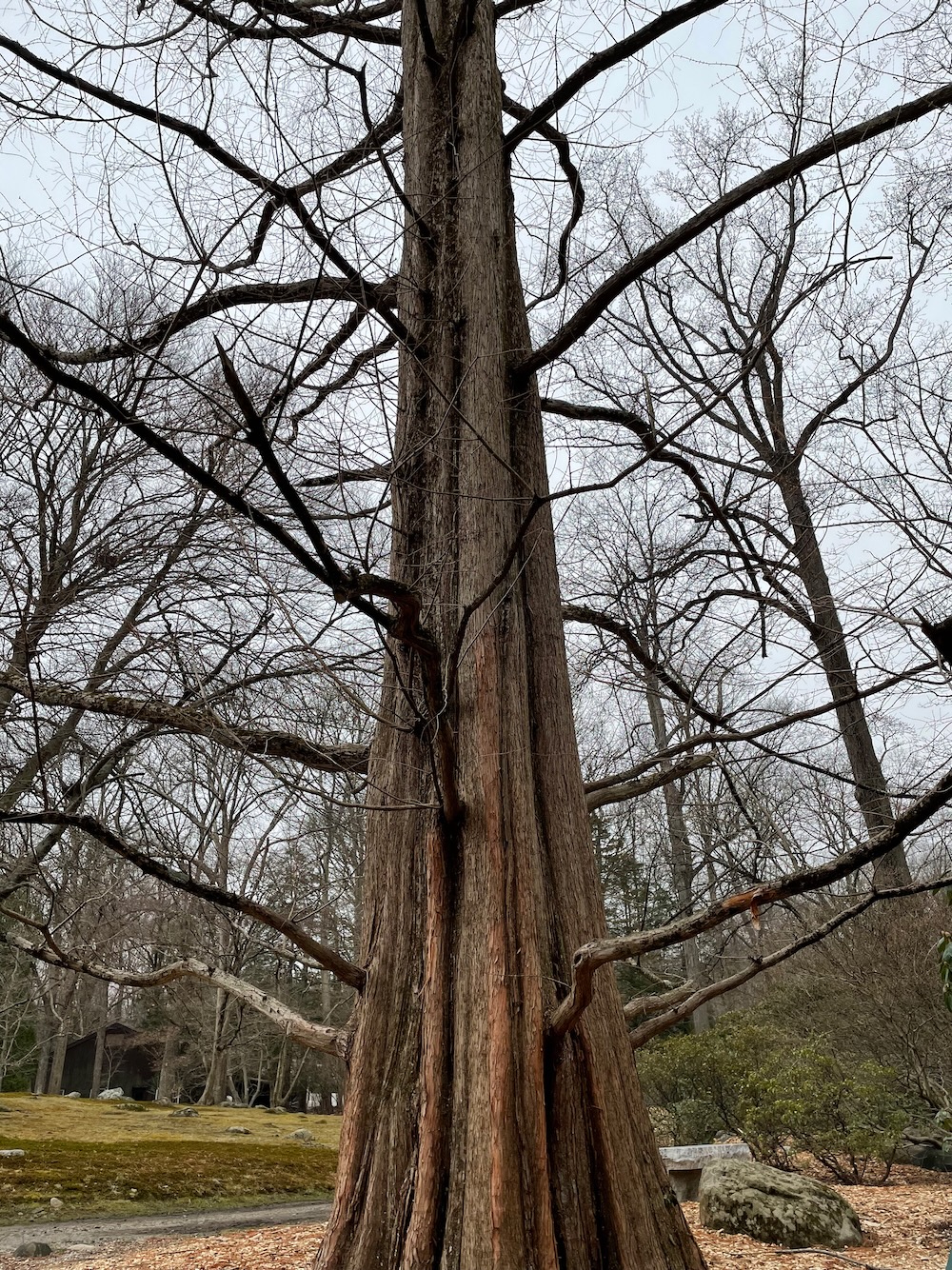