Bigelow Hollow is geographically a little weird. The state park itself is pretty small, but pretty much everyone who goes up to Union to enjoy the trails and lakes assumes it’s just “the whole thing.” It’s not. “The whole thing” is mostly Nipmuck State Forest, but on the ground it’s pretty seamless and it’s all beautiful, rugged, and remote, so no one cares. 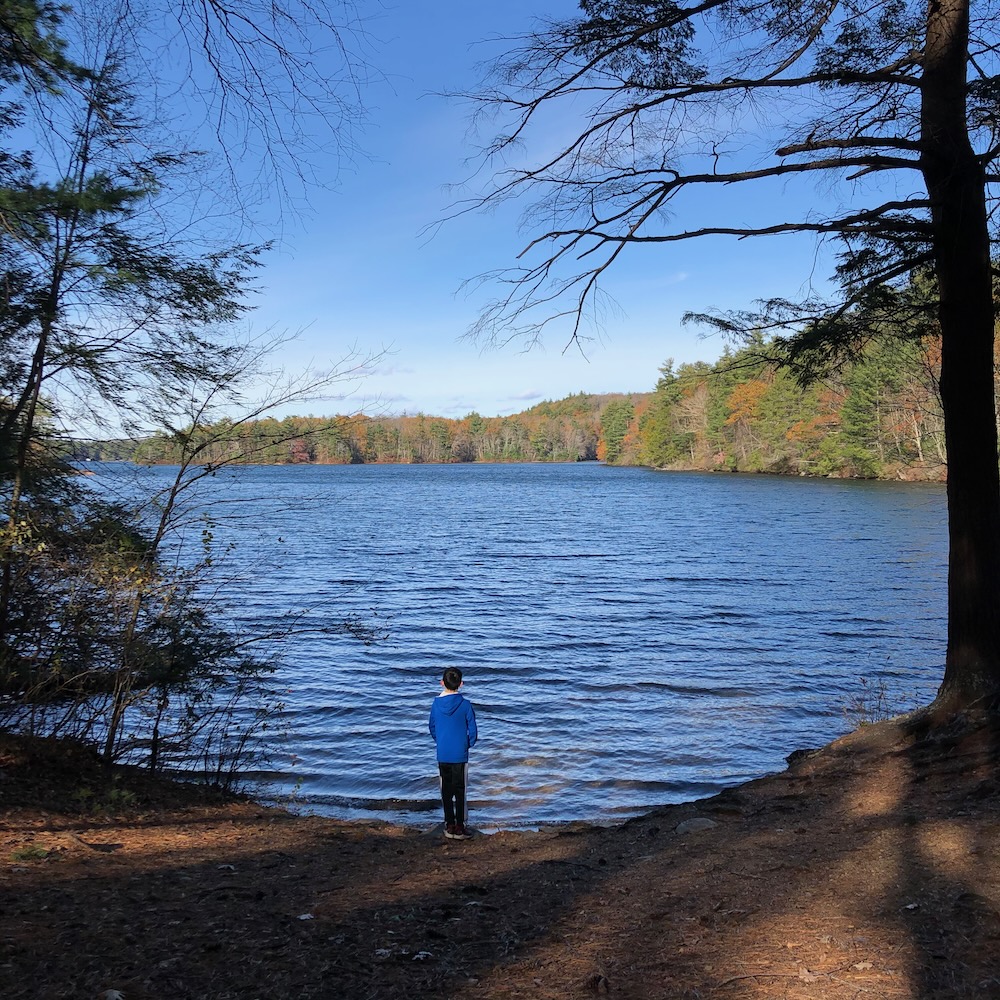 But for CTMQ purposes, I’ve split up my pages in and around the park into west (mostly the state park) and north and east (mostly the state forest) and the Nipmuck Trail a little of the former, a lot of the latter. I won’t even mention that the eastern trails take you into Woodstock and – gasp! – Massachusetts. 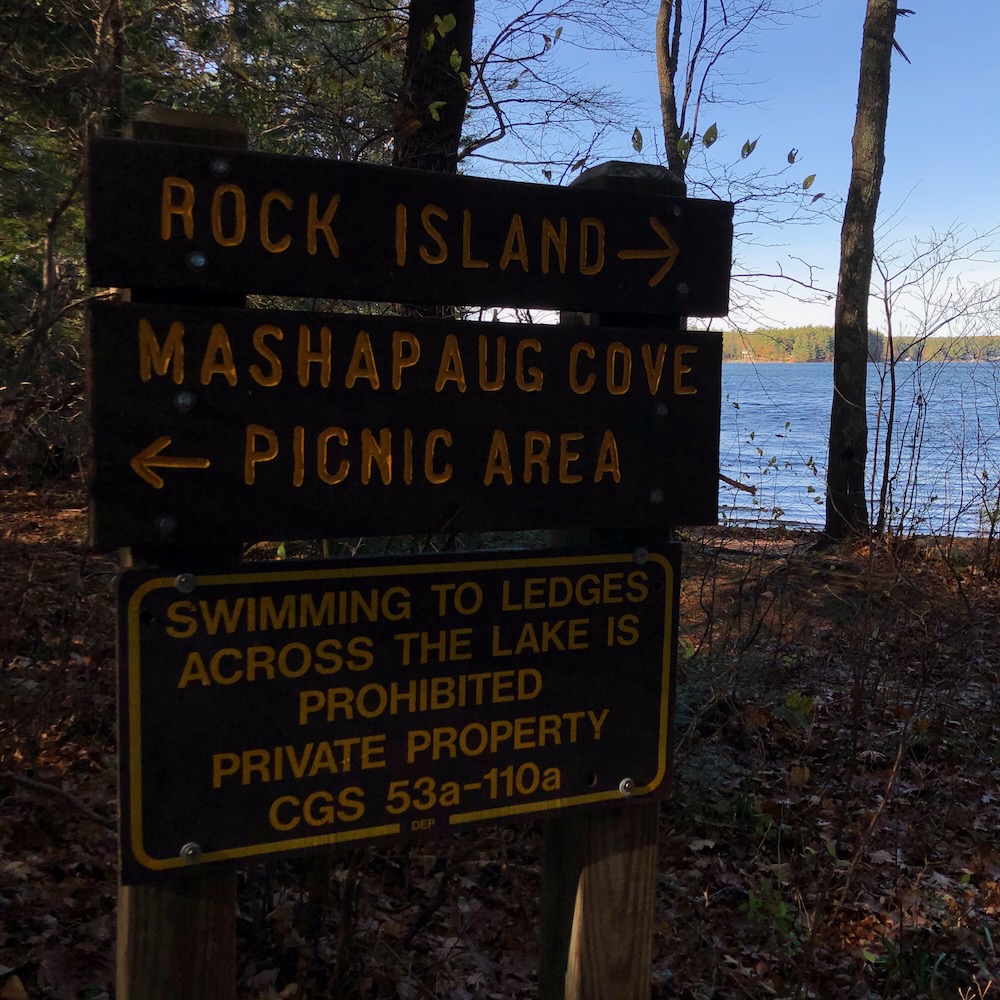 Although it’s no joking matter, I often joke that Bigelow Hollow is where people go to get lost. Like, literally lost in the woods. Lots of people get lost up here a lot. I have some hypotheses as to why this is.

People come here to picnic near one of the three beautiful pristine lakes. They go for a walk only to find that those walks are much more difficult than they’d anticipated. They didn’t bring water or a jacket and panic and get lost. 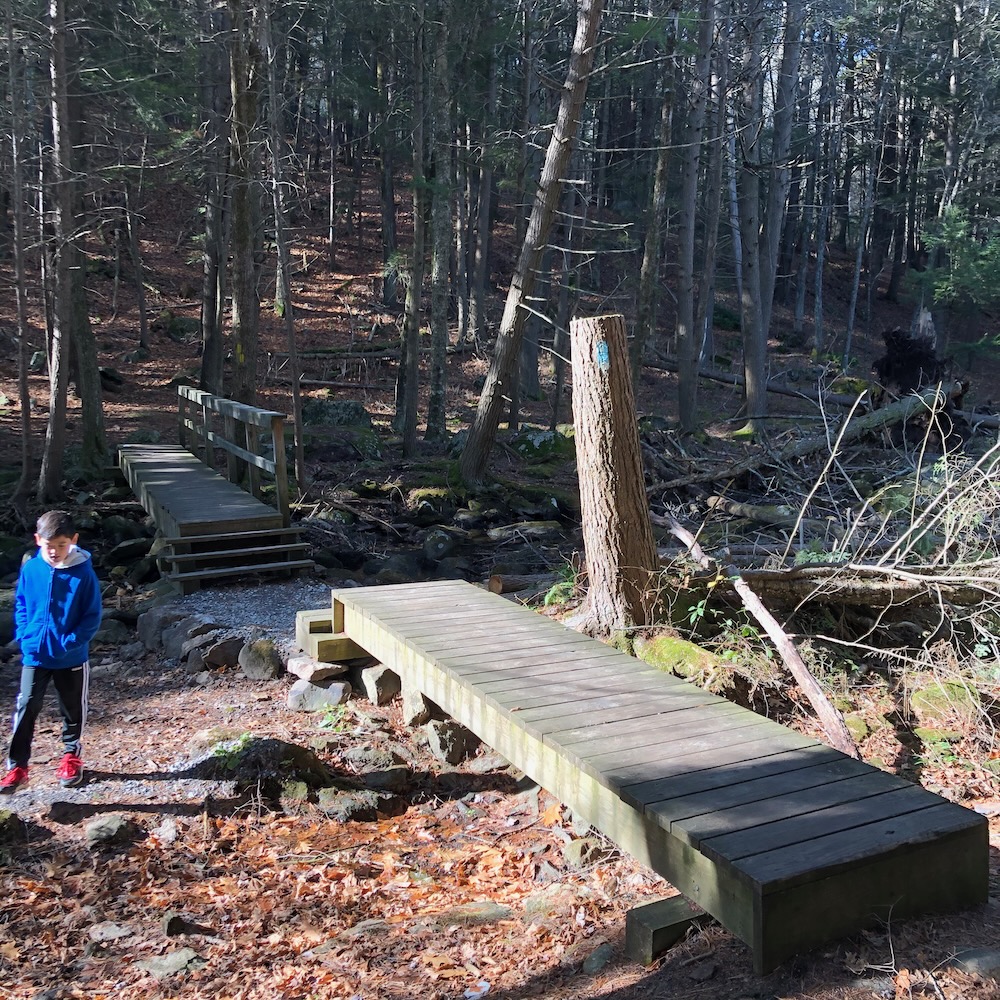 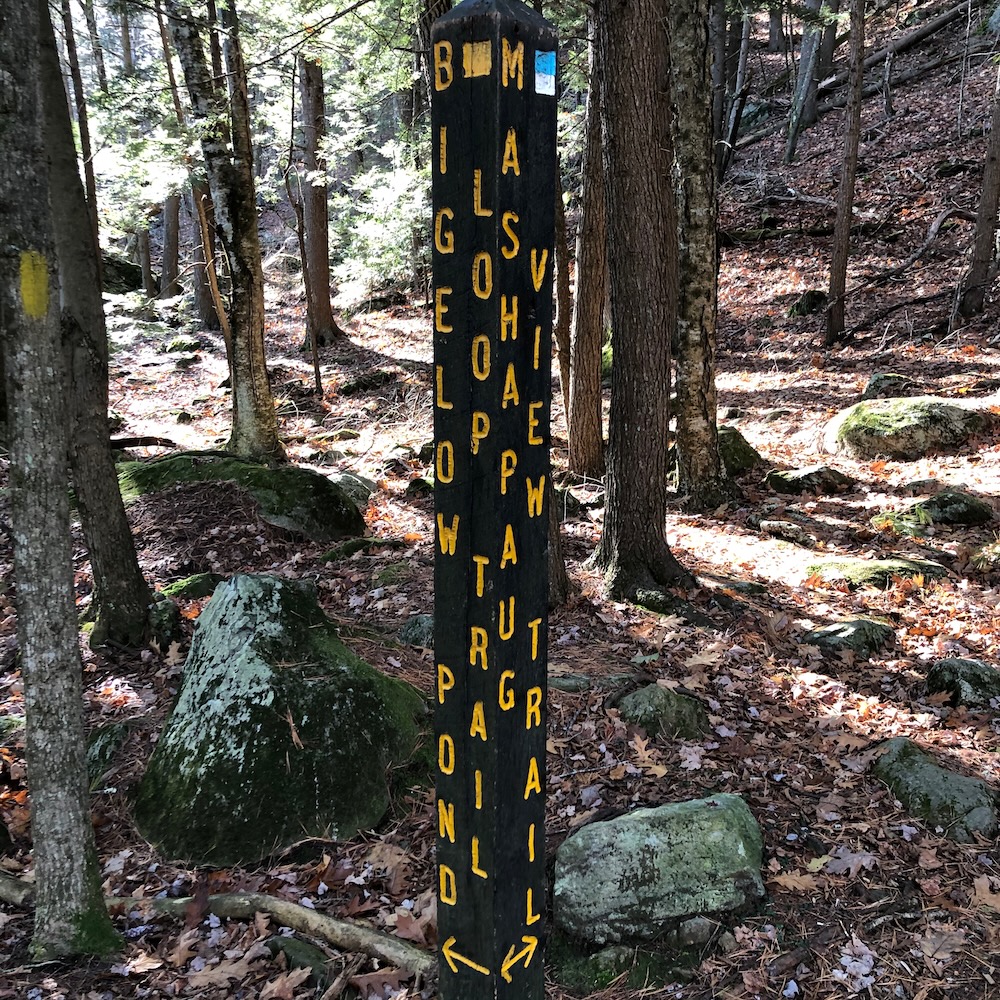 The trails often involve lots of twists and turns around and over large rock features. People get lost as a result.

There are many versions of area trail maps and many don’t include the network of forest roads. This confuses a lot of people and some get lost.

There’s no cell service anywhere here north of the entrance. People rely too much on their smartphones and don’t think to download a map and wind up getting lost. 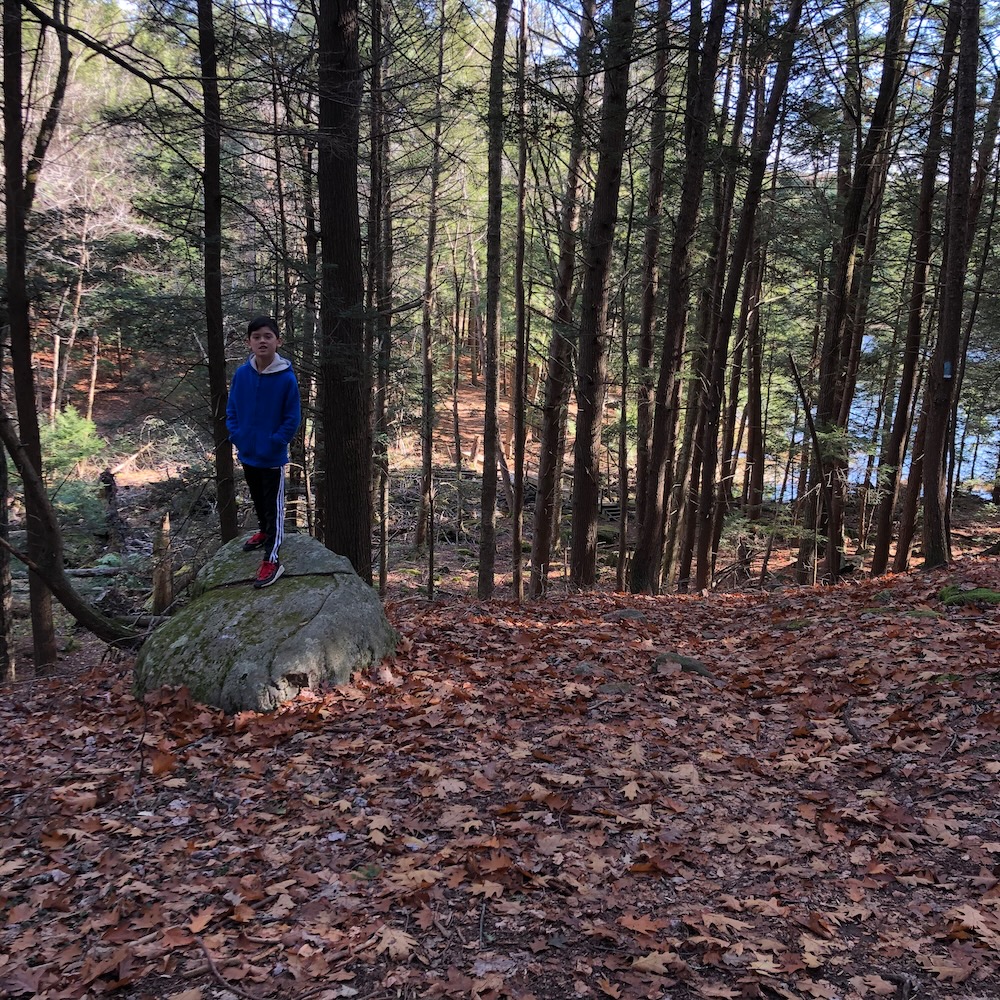 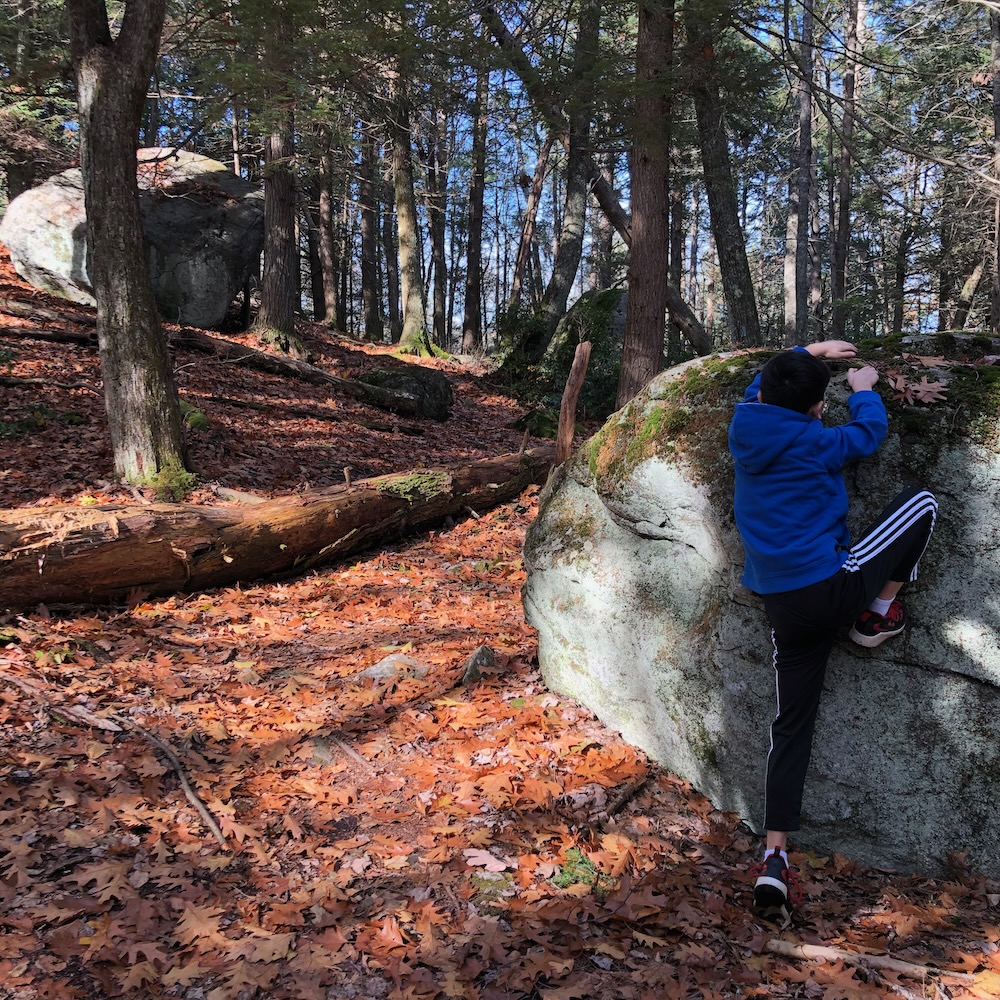 And lastly, some of the lesser-traveled trails aren’t blazed perfectly all the time. In fact, just a mile or so into our walk, Calvin and I completely lost the trail. I’ve been hiking for 40 years, 30 on my own. I had a paper map and a downloaded map. I kinda know what I’m doing, but for five minutes, we wandered in circles around massive boulders with another woman and her dog looking for the trail.

For real. This never happens to me. It was crazy. Such is the deep woods mystery of Bigelow Hollow.

But don’t let any of the above dissuade you from coming up here to hike. It’s one of the best properties in the entire state at which to do so. And the Mashapaug Pond Trail offers a good, moderately challenging introduction.

It begins at the largest parking area in the park and shares some space with the yellow-blazed Bigelow Pond Trail near the picnic area. Cross a bridge and head north – into the dark woods. 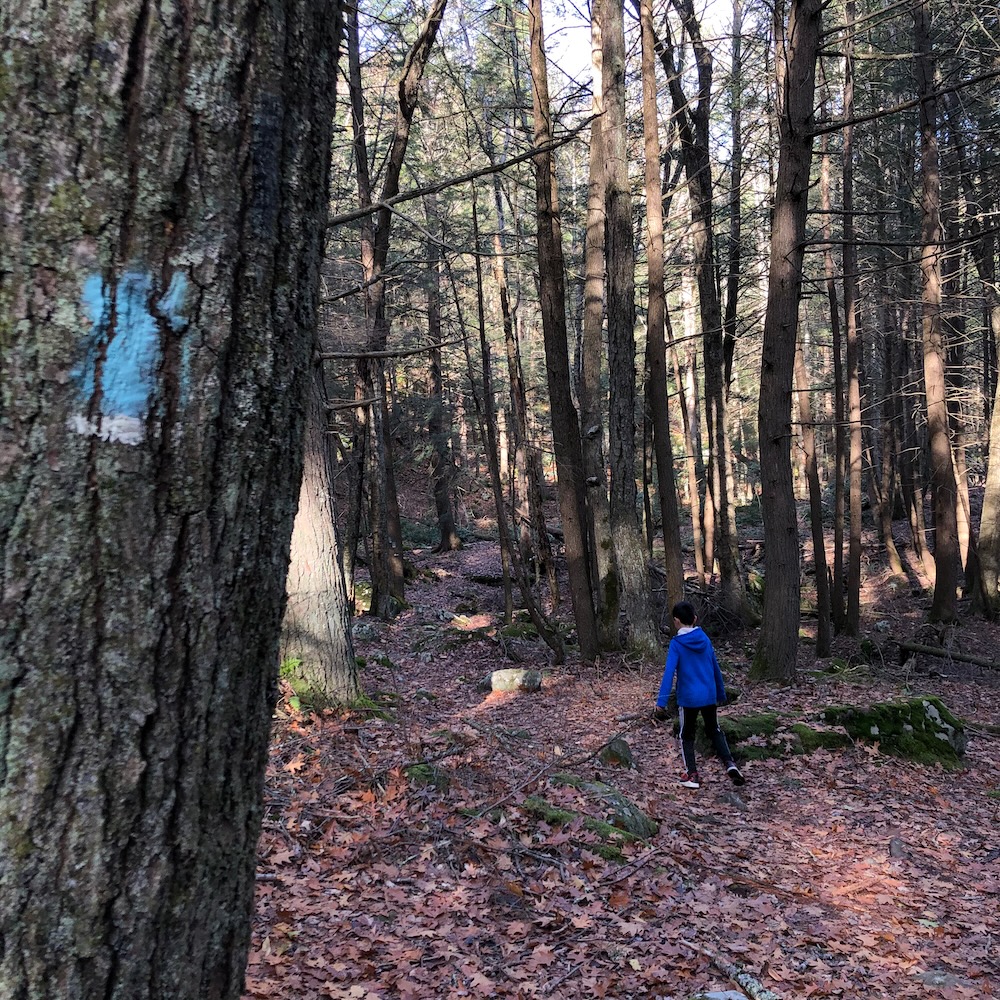 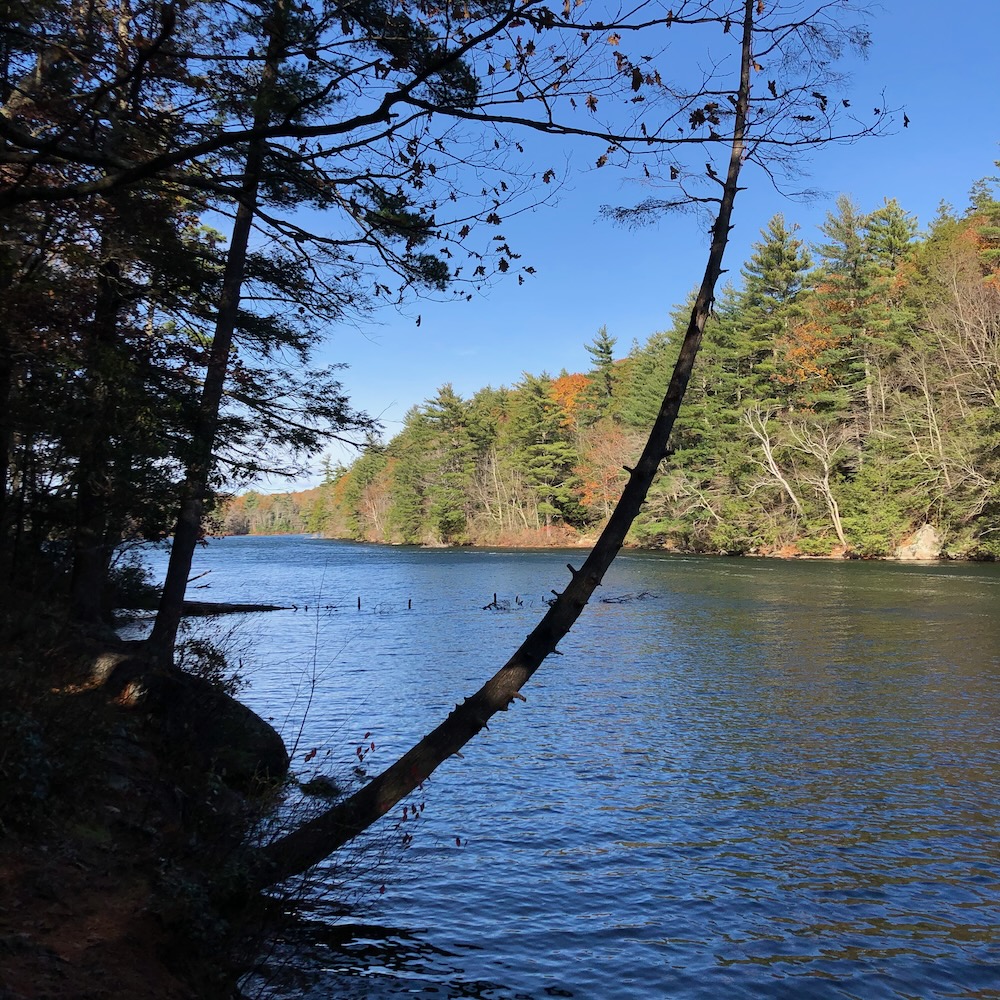 Everything is bigger at Bigelow Hollow. The white pines are taller and the white oaks are massive. This is the rare place in the state that hasn’t been logged for a long, long time and the trees give hikers a glimpse into what old growth forest could look like if such forests existed around here.

Something else that exists here in spades is a lot of that magical temperate forest zone where white and red pines hug the shoreline of a large pond. Soft footfalls and that distinct coniferous forest smell envelope you as you gaze across an ice cold, crystal clear pond. I love it. And this loop trail courses near the water for a good half a mile or so. A side trail took us out to Rock Island (second picture below) which is a worthy 10 minute diversion. Trust me. 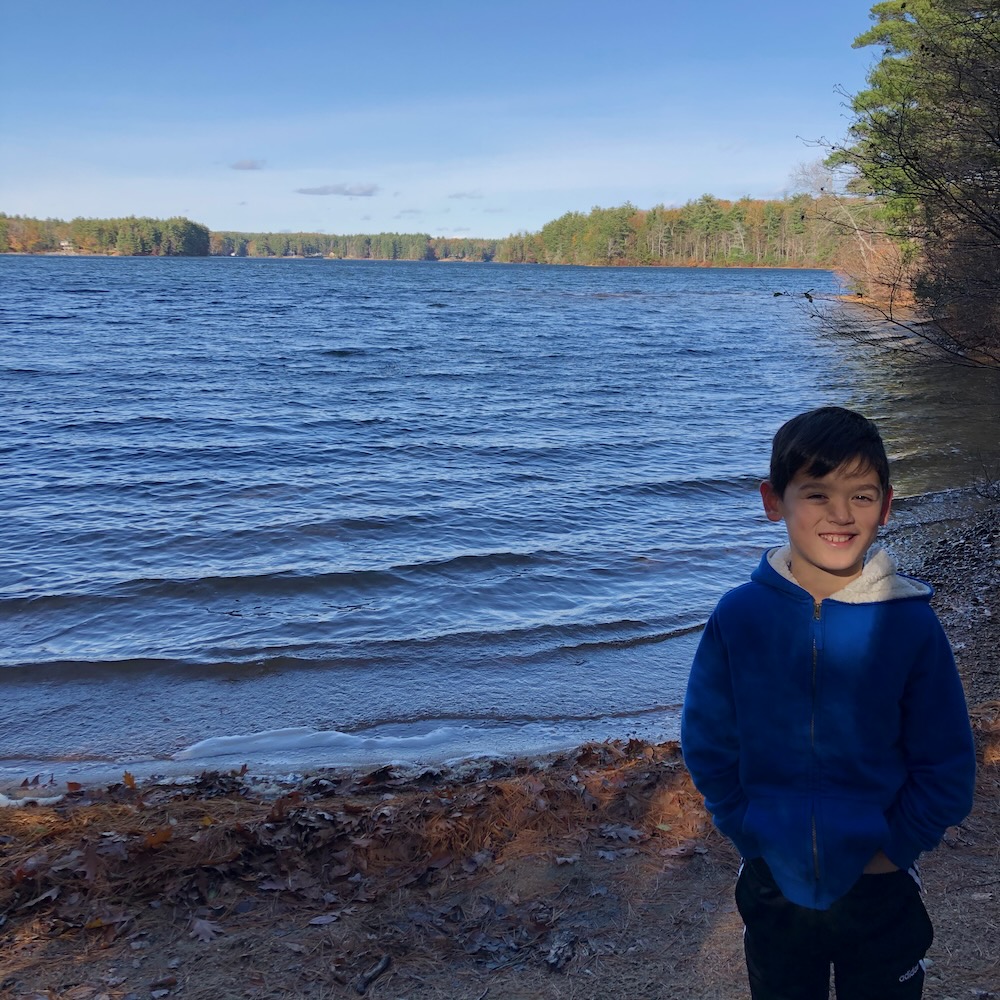 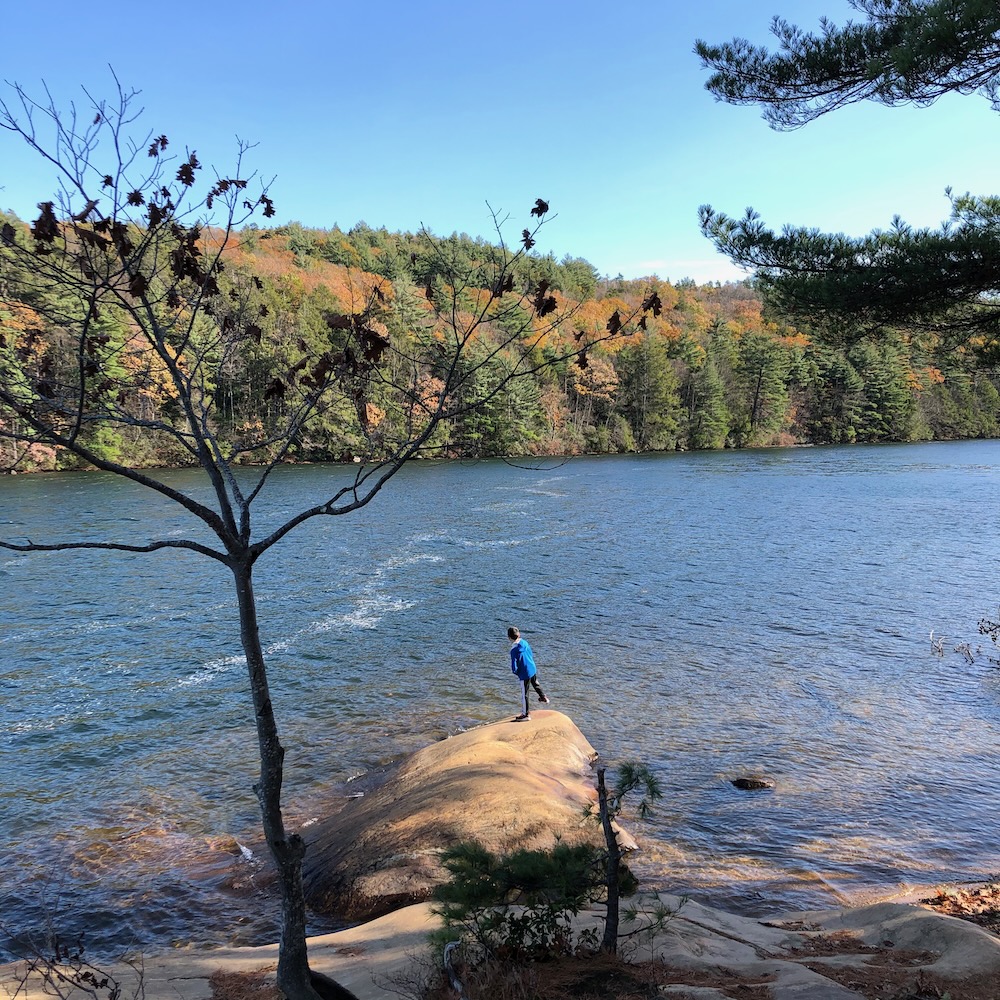 There are small cottages and houses at the northern end of the pond, but not here in the state park, so that’s nice. I just read that two state records were set from fish caught at Mashapaug. The heaviest largemouth bass ever caught in Connecticut in 1961 (12 lbs. 14 oz.), and the heaviest channel catfish ever caught in the state was caught here in 2004 (29 lbs. 39 oz.). Cool.

The trail turns west away from the water and begins a rocky up and down walk through what feels like some of the most remote trail in the state. It’s not, really, as I-84 isn’t too far west – although it’s one of the least busy stretches of the interstate between Sturbridge and upstate New York. 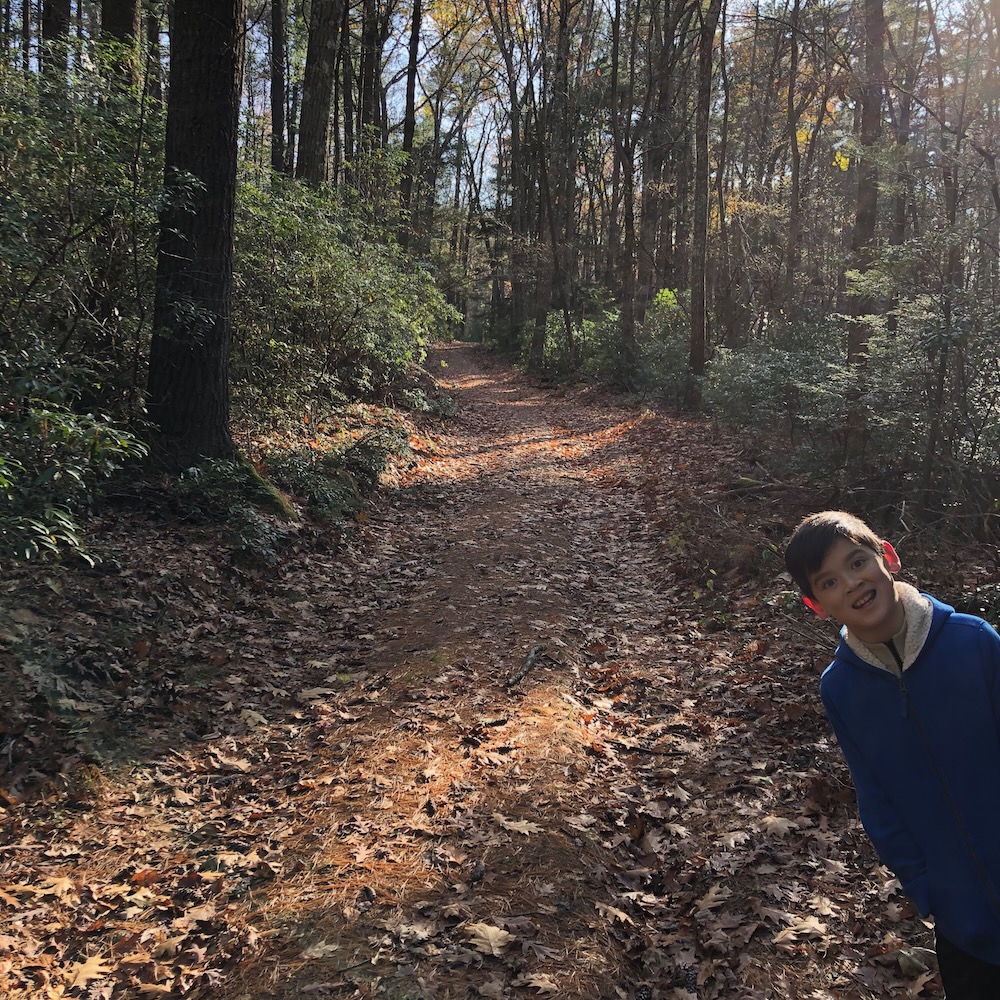 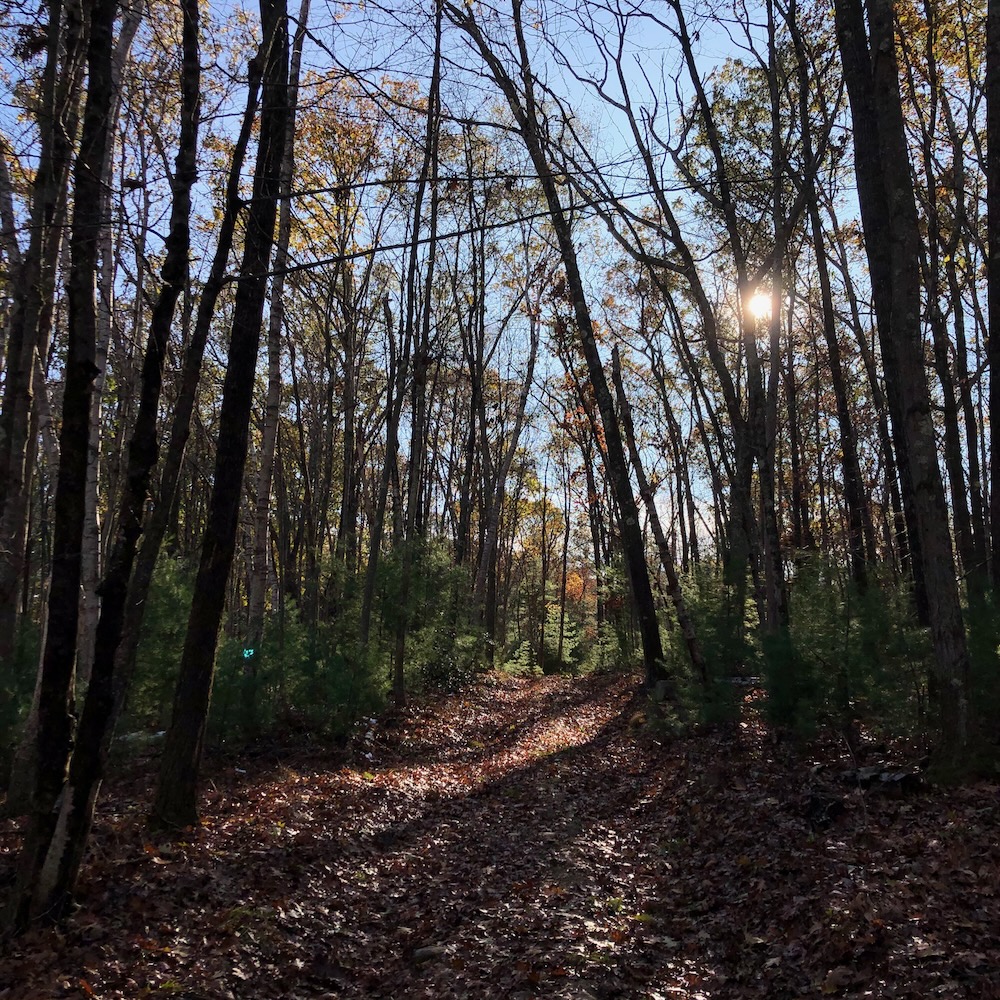 Some of the trail was closed for state forest logging, and Calvin particularly enjoyed the careful signage in what feels like the middle of nowhere. Above I wrote that the transition from state park to forest was “seamless.” I lied. The demarcation is quite clear, not just with the typical yellow-banded stripes at the state forest border, but with little wooden signs which I’ll admit, were quite absurd in their number.

At least it gave me something to talk about with my son to distract him from the PUDS (pointless ups and downs). We finally turned east in the last stretch of the loop; more large boulders, some wetland areas, and some stream crossings. 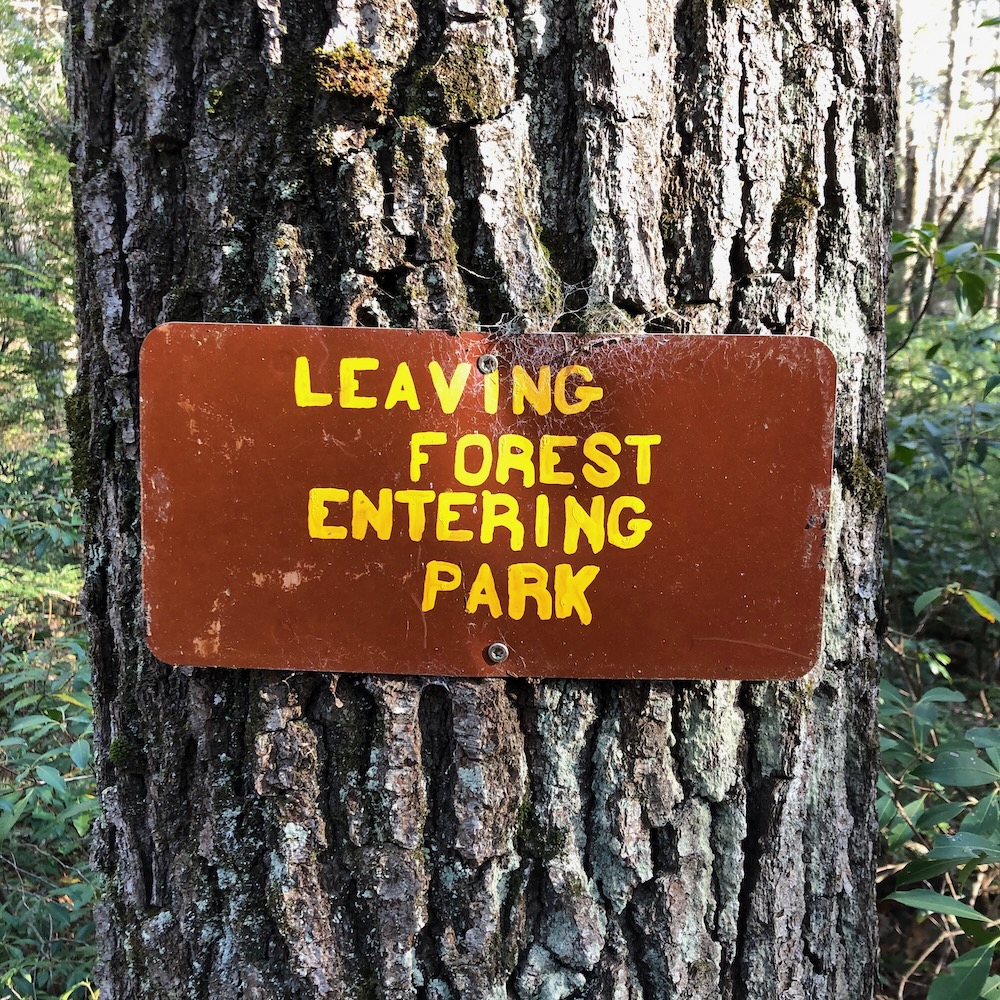 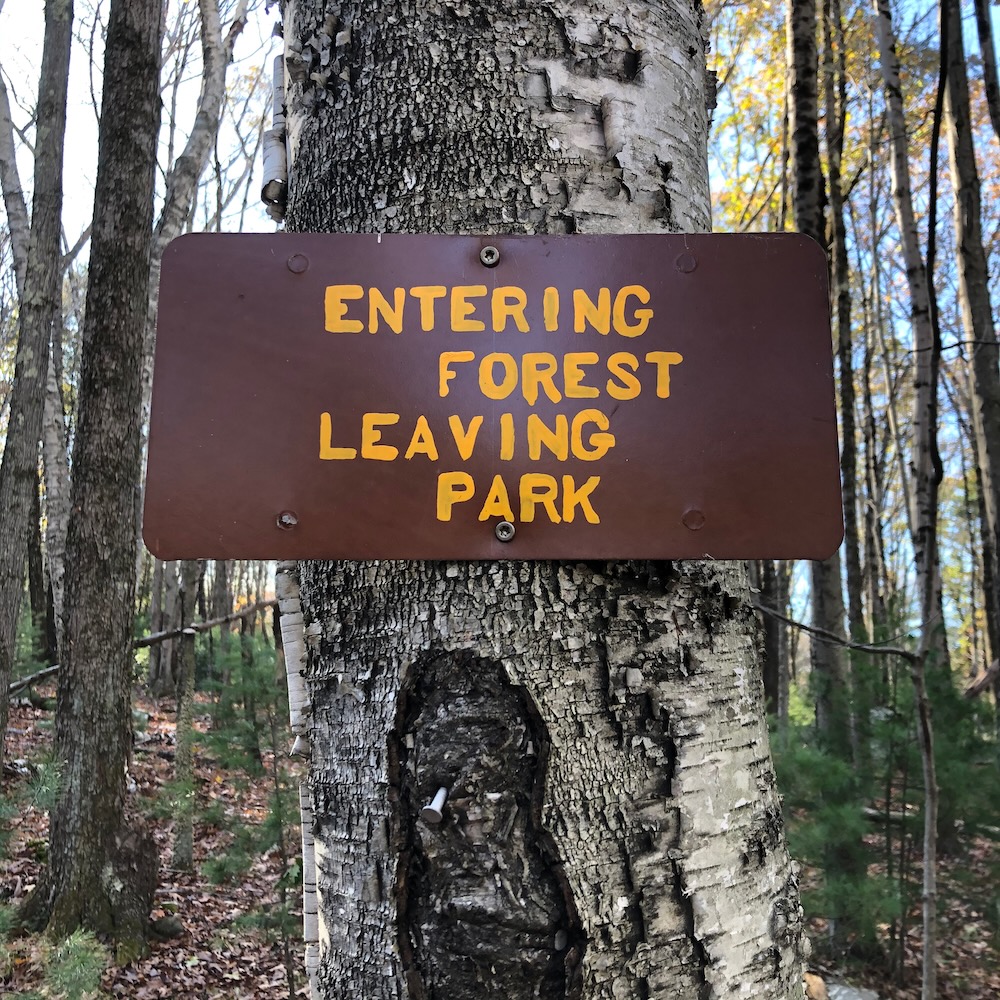 The orangey late autumn sun cast long shadows in the woods – woods we seemingly had to ourselves – and for a short while, I felt as I’d felt as a 13-year-old falling in love with hiking. No cell service, no traffic sounds, the pure smell of the woods, and proper lack of conversation; allowing each of us to be alone in our thoughts.

Bigelow Hollow allows this and I love it.

We completed the loop and I scuttled the plan to hike the shorter Bigelow Pond Loop Trail due to the detour and reroute we had done. This is a fairly taxing five miles and Union always feels like it’s four hours from home rather than one. So we hit the road and I bided my time until I got back up here to finish with the state park trails. 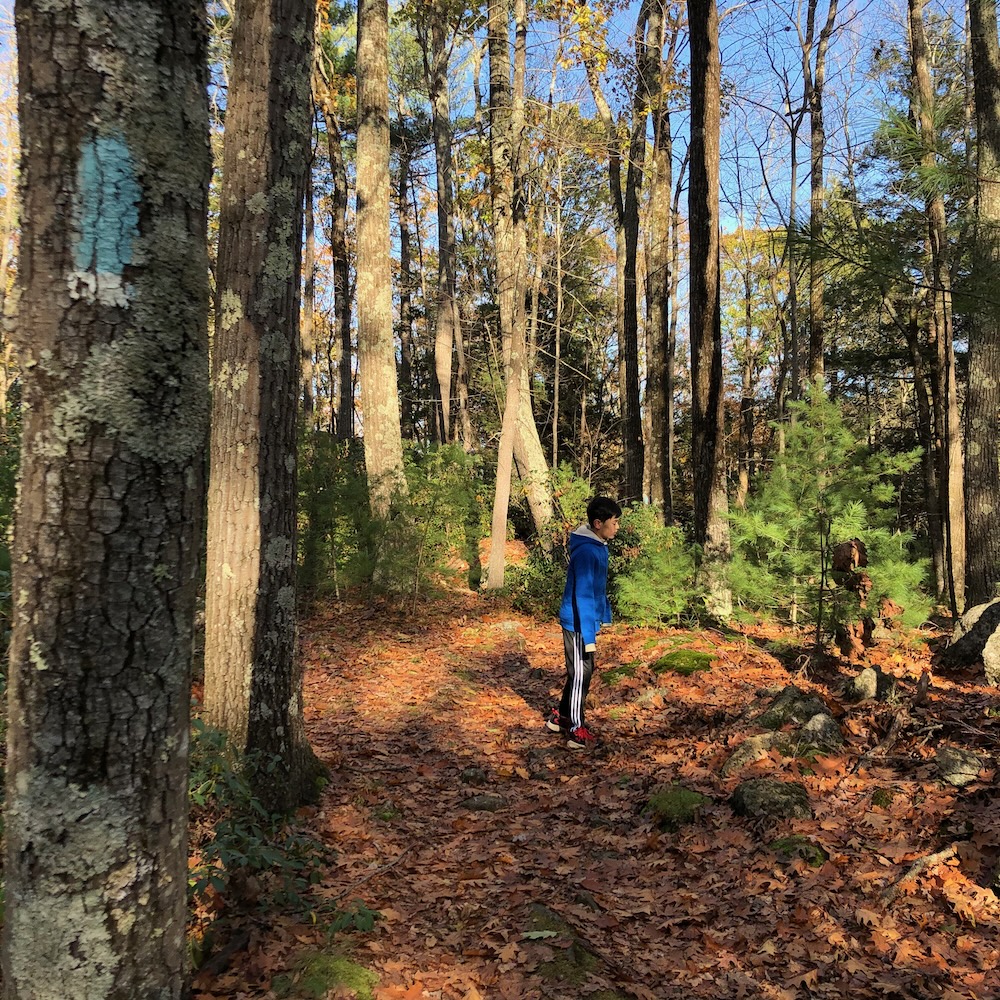 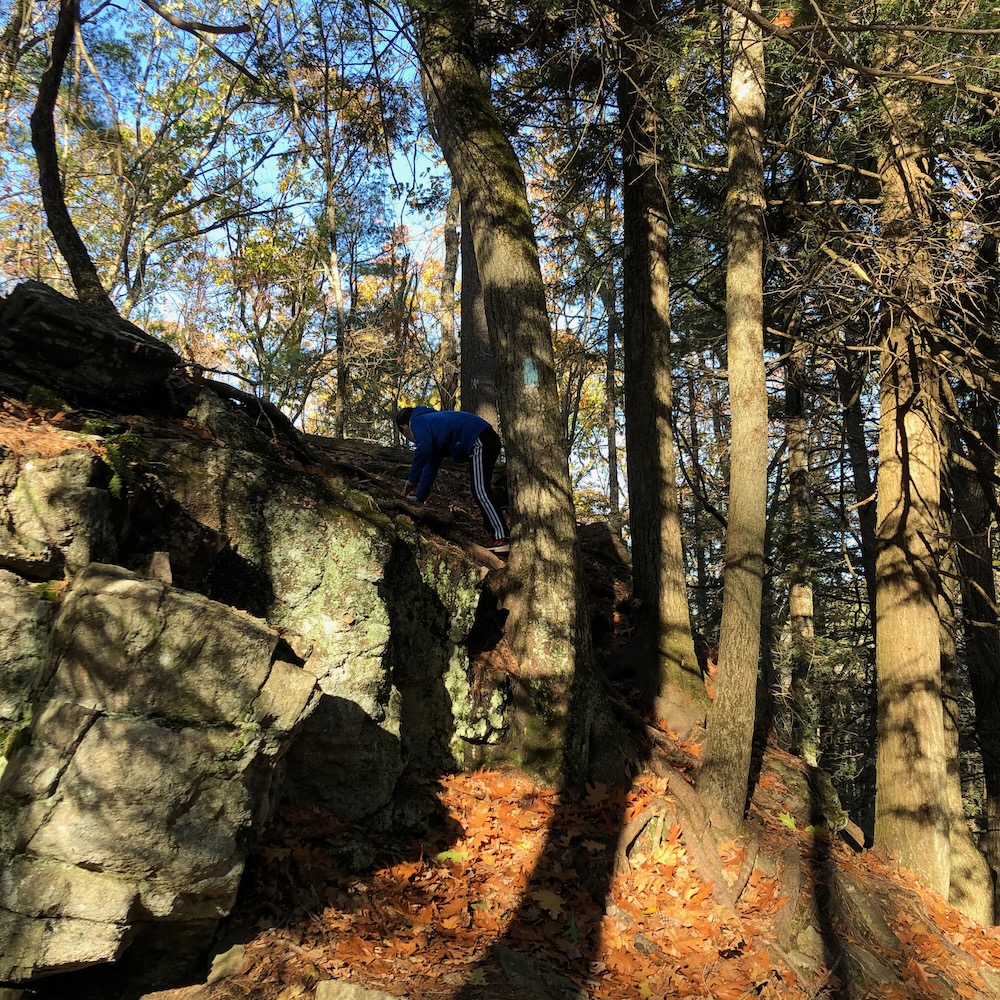 Juneteenth will become an annual hiking day for me, as long as I work for a company that gives me the early summer day off. The boys are busy with camp and school, so off I go. Back up to Union and Bigelow Hollow State Park.

I hiked the northern leg of the Nipmuck Trail and then back down the other side of Breakneck Pond before tackling this shortest of Bigelow Hollow loop trails. The parking area was fairly busy as other Juneteenth families were picnicking and boating around and on the ponds. It was a beautiful day. 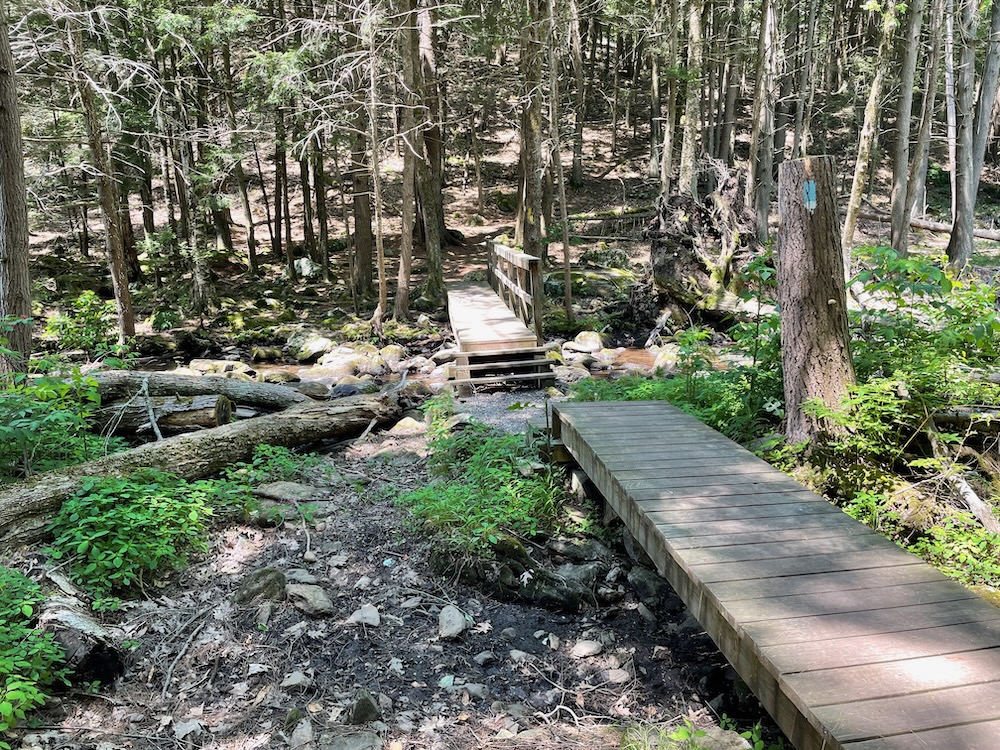 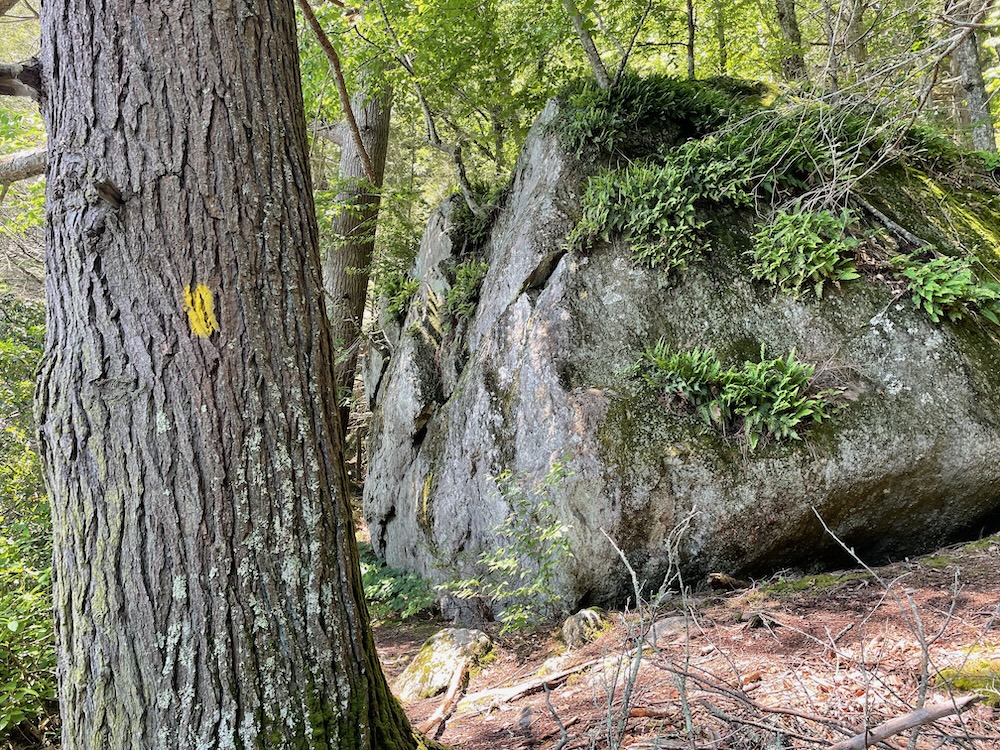 I walked the familiar first short bit that shares real estate with the Mashapaug Pond View Trail before turning south to follow the yellow blazes. This is the “beginner” trail here, so I was quite surprised when I was immediately confronted with some seriously rocky terrain and even some baby-bouldering right alongside the water’s edge.

I imagine quite a few picnickers reach this in short order in their flip-flops and head right back to their Doritos and potato salad. This loop would not be fun or easy in flip-flops – fair warning. 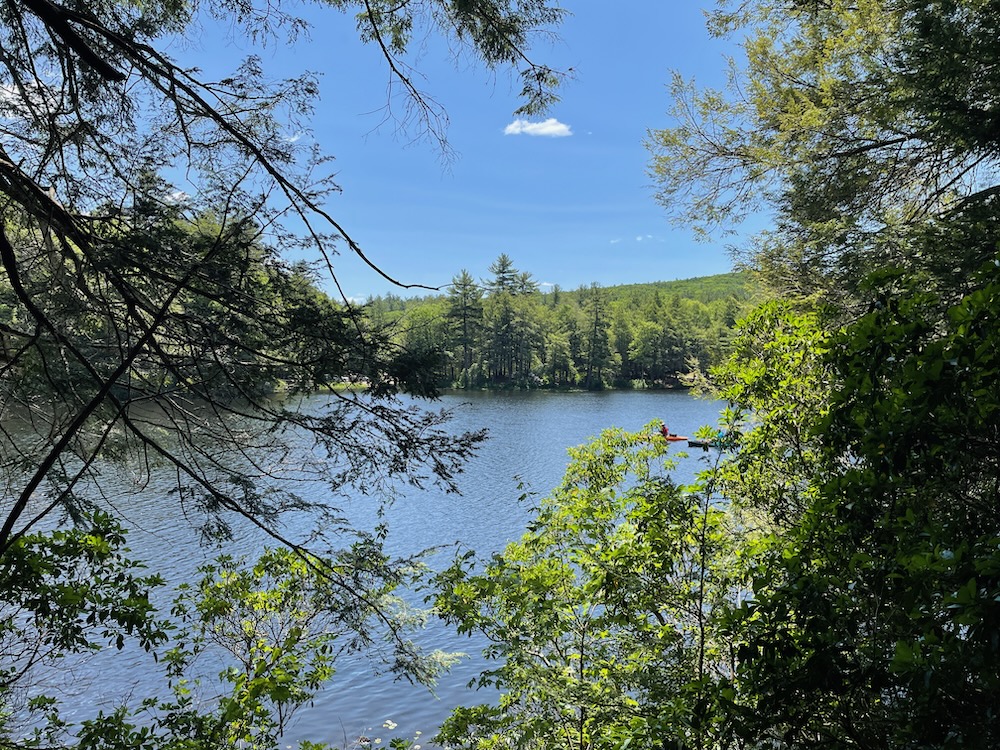 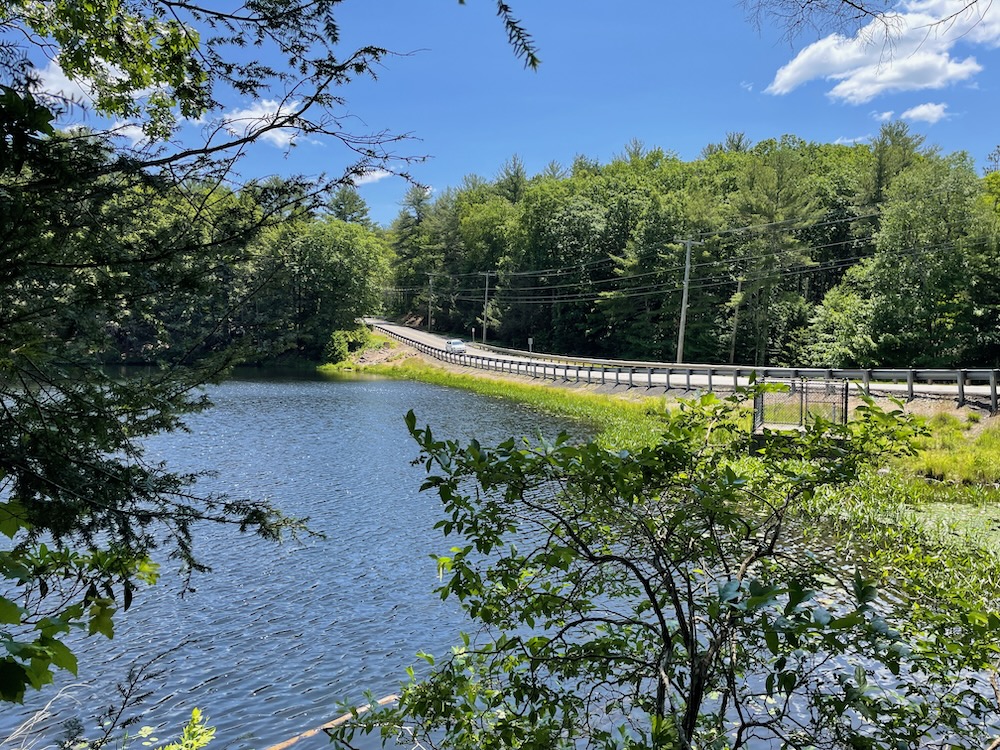 And at one point, the trail almost goes underwater (this was not a particularly wet spring either) and the blazes kind of peter out. Another quit point, I’m sure. But I was all-in; I trudged southward along the small pond dotted with paddleboaters and fishermen on the other, picnic area, side.

The trail smoothed out as I approached Route 171 and crossed the dam next to the road. As SUVs rumbled by, I had that weird feeling again one gets on any long-distance hike wherein after spending a day – or days – in the woods and suddenly walking next to large vehicles when you pop out onto a road. Granted, this was a very, very tiny version of that disorienting feeling, but it was still there. 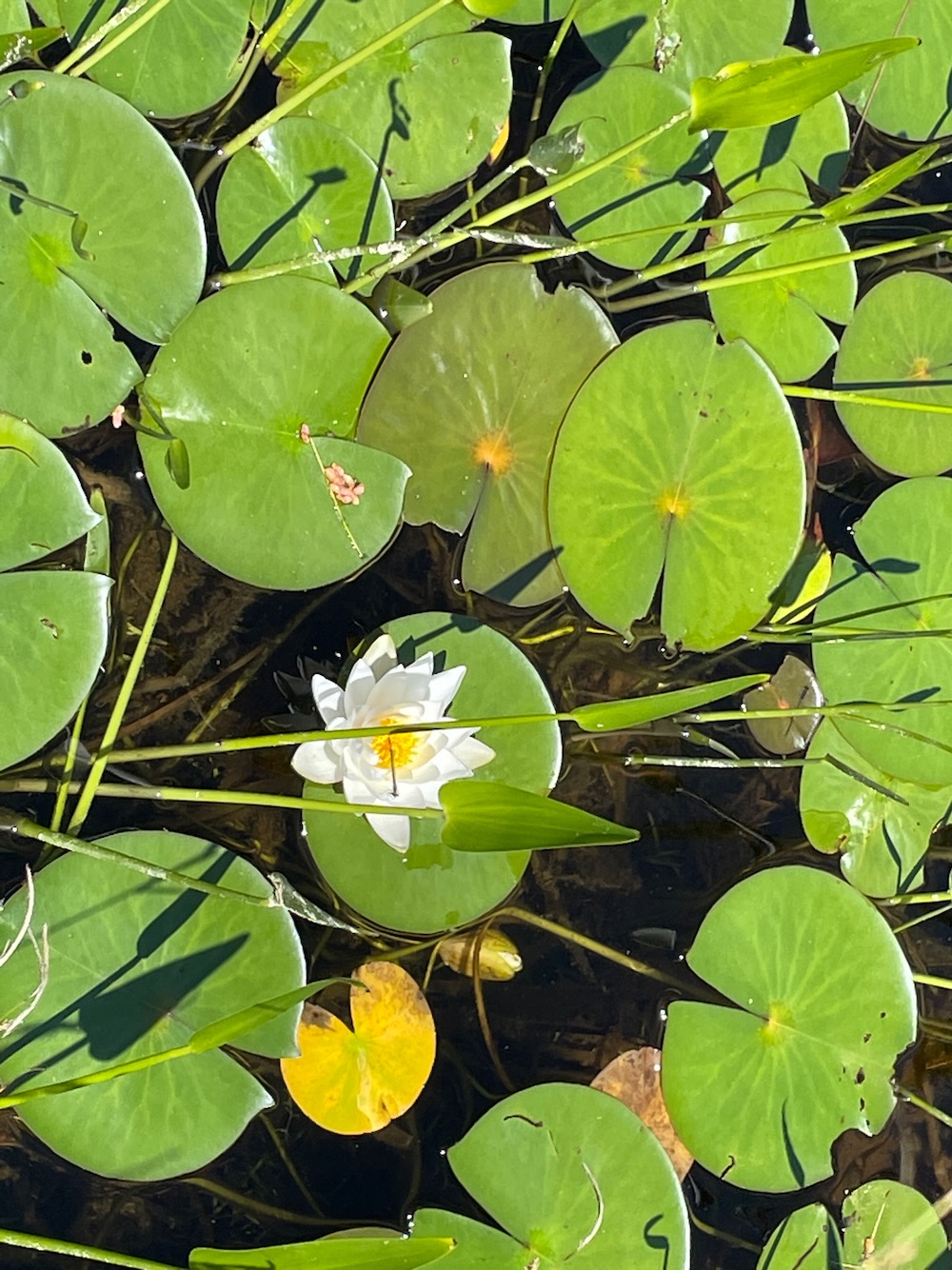 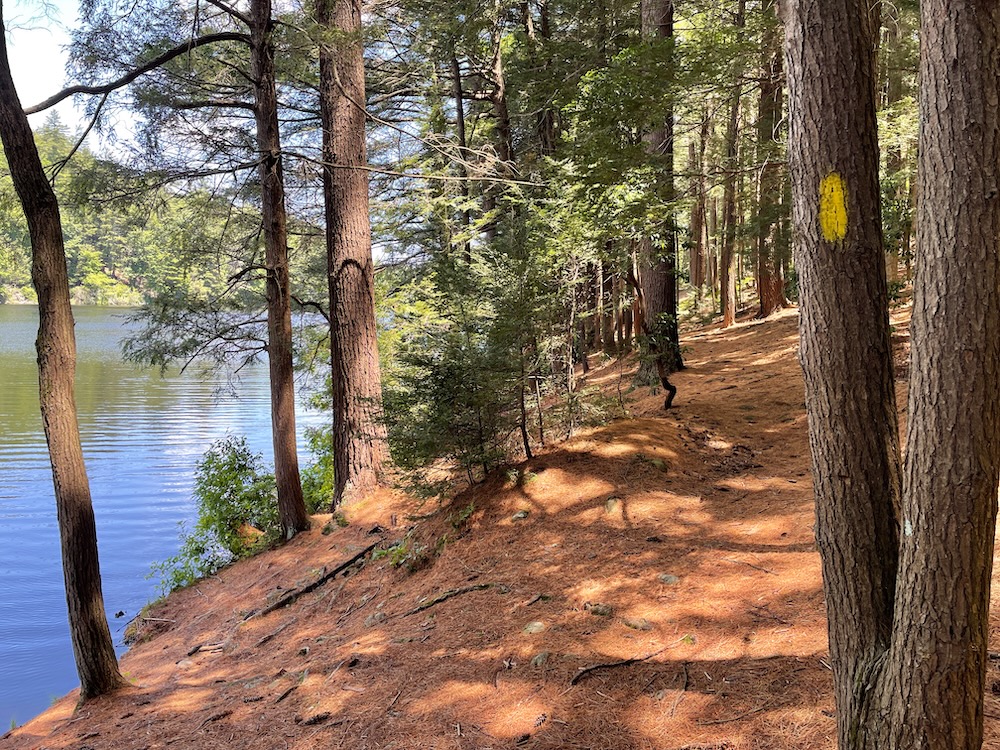 Back into the woods; mostly pine this time, and back up the last stretch towards the people and my car. I imagine this half a mile or so over the pine needles, past the massive boulders, all alongside the pretty pond is traversed by thousands of non-hikers each year. Folks who know how many people get lost up here every year. Folks in flip-flops. Folks who don’t want to lose cell service or be too far away from their car should they twist an ankle.

Folks who very well may think to themselves, “boy, this is nice. I feel good. I want to do more.” And many of those folks will do more, and I encourage them to do more. Keep walking! Go all the way around Bigelow Pond! Come back and take in one of the longer hikes up here! Camp overnight at one of the lakeside sites! It doesn’t get much better than this place in Connecticut!

I love Bigelow Hollow State Park (and the Nipmuck State Forest that surrounds it). Our state parks are free now and who knows how long that program will last. So go for it. Seriously. You’ll be okay. 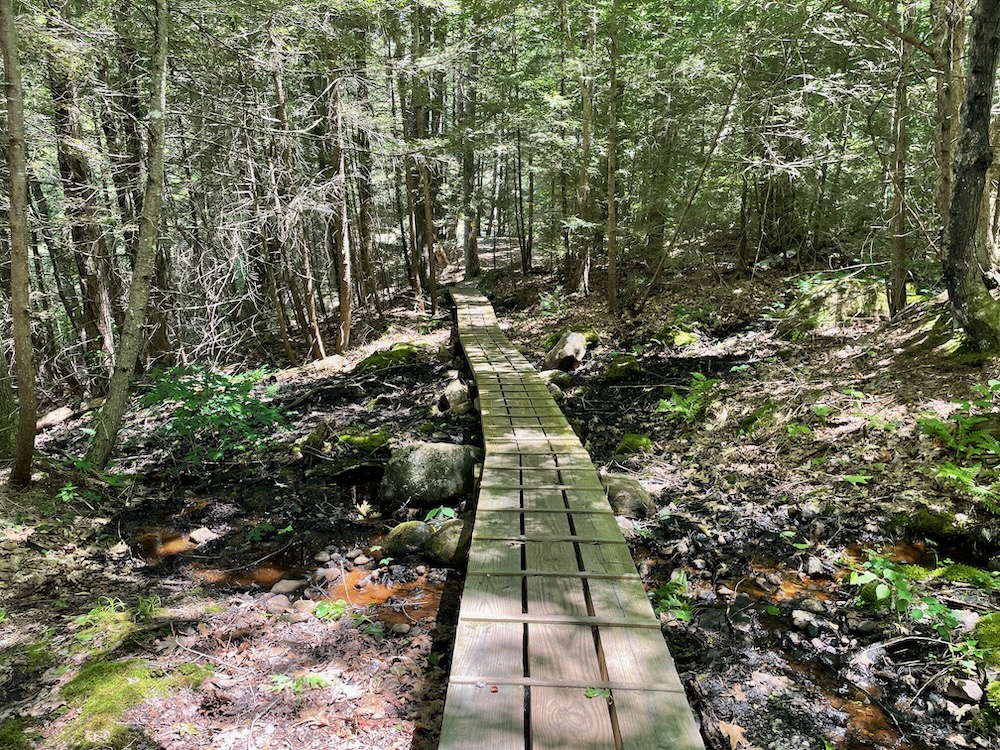 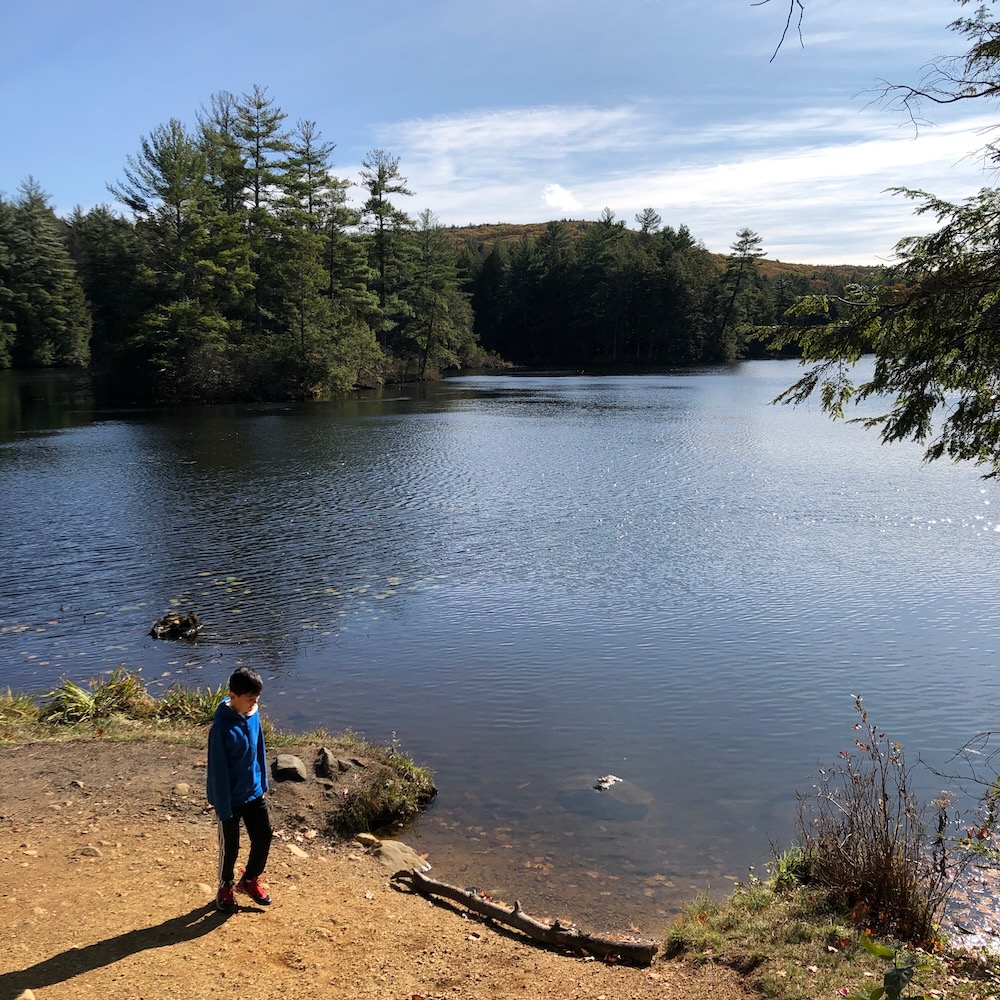