This is a fairly rugged seven or so miles, but the kicker is that no matter who you are or how you hike it, you must hike several more miles to get back to a car. I suppose you could have a kayak left at the northern terminus at the top of Breakneck Pond and a car spotted at Bigelow Hollow State Park, but… that’s ridiculous. 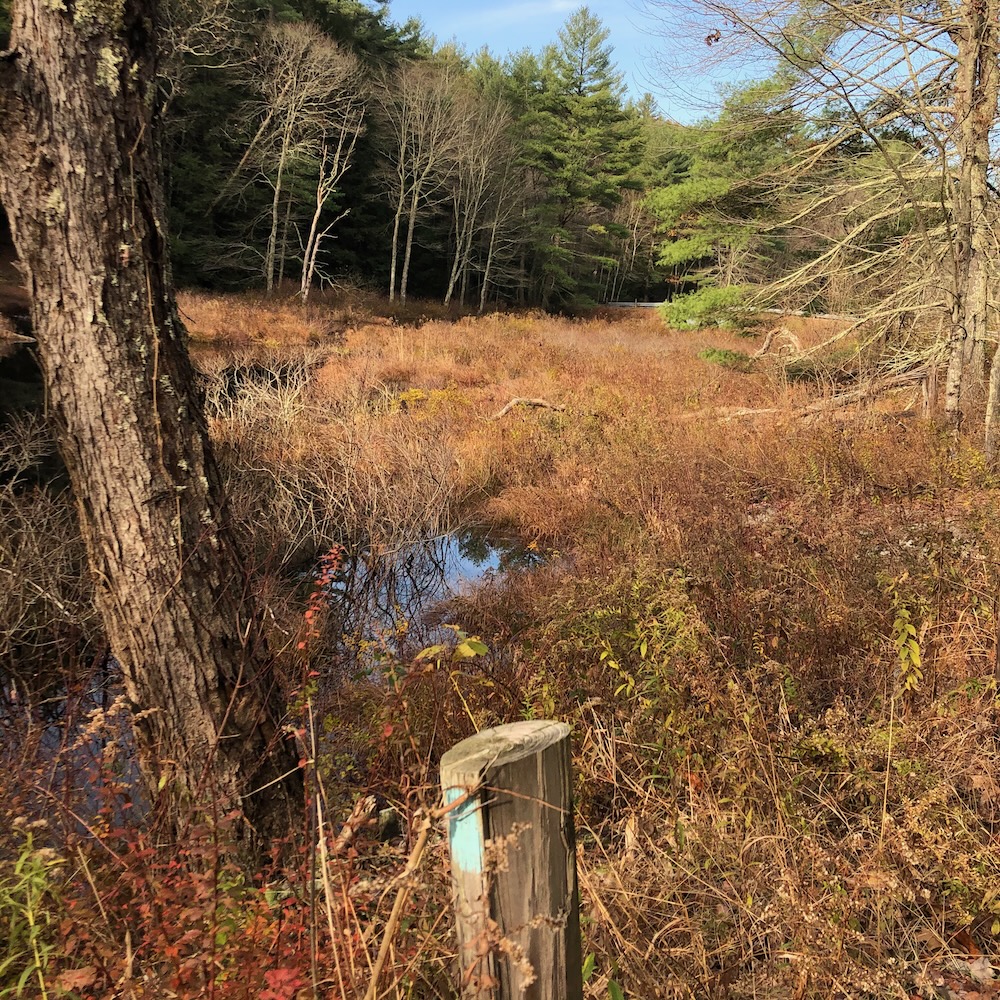 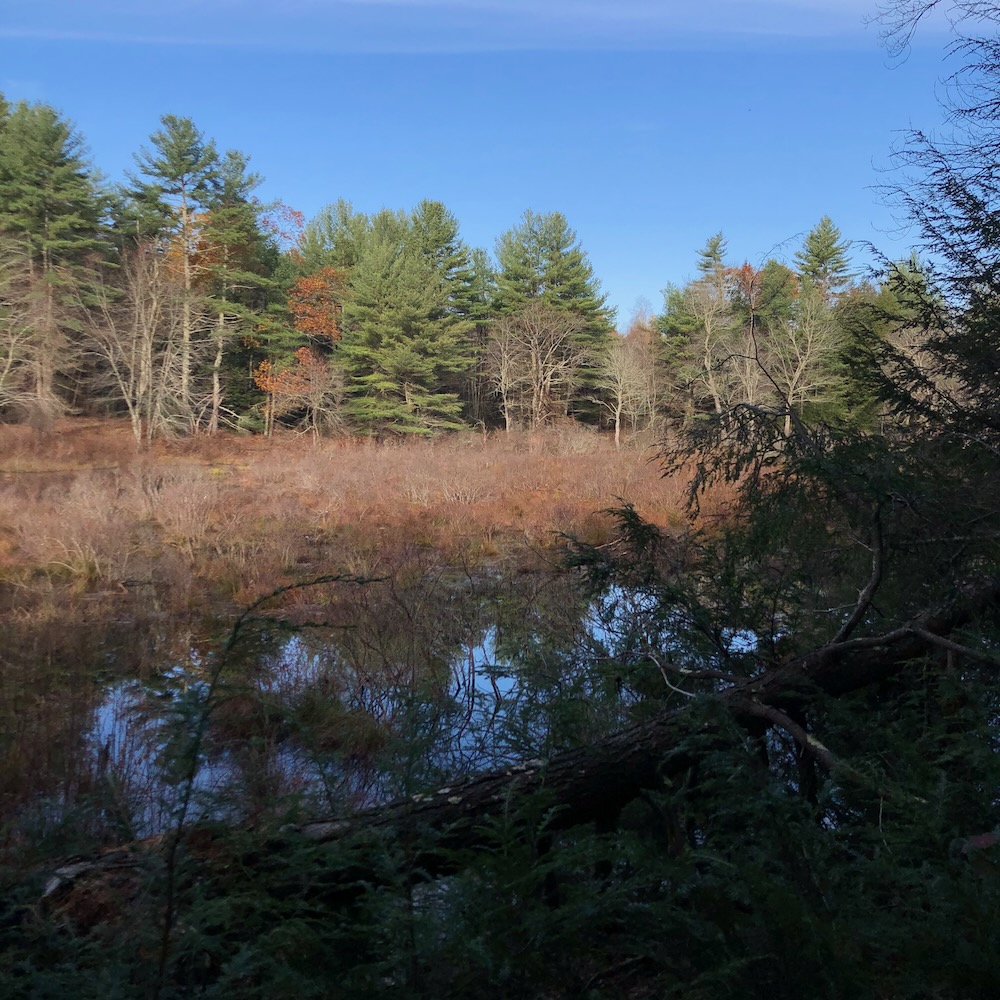 The point is that once you reach the northern end of the Nipmuck, you must walk several miles back to your car. But! But those miles are beautiful and remote and frankly, exemplify why we love hiking, right?

I had stopped my northward march up the Nipmuck at the Barlow Mill Road crossing at the border of Eastford and Ashford. There’s room for a few cars here, but if you’ve never driven the forest backroads of northern Ashford, be prepared to feel like you’re driving to your doom: 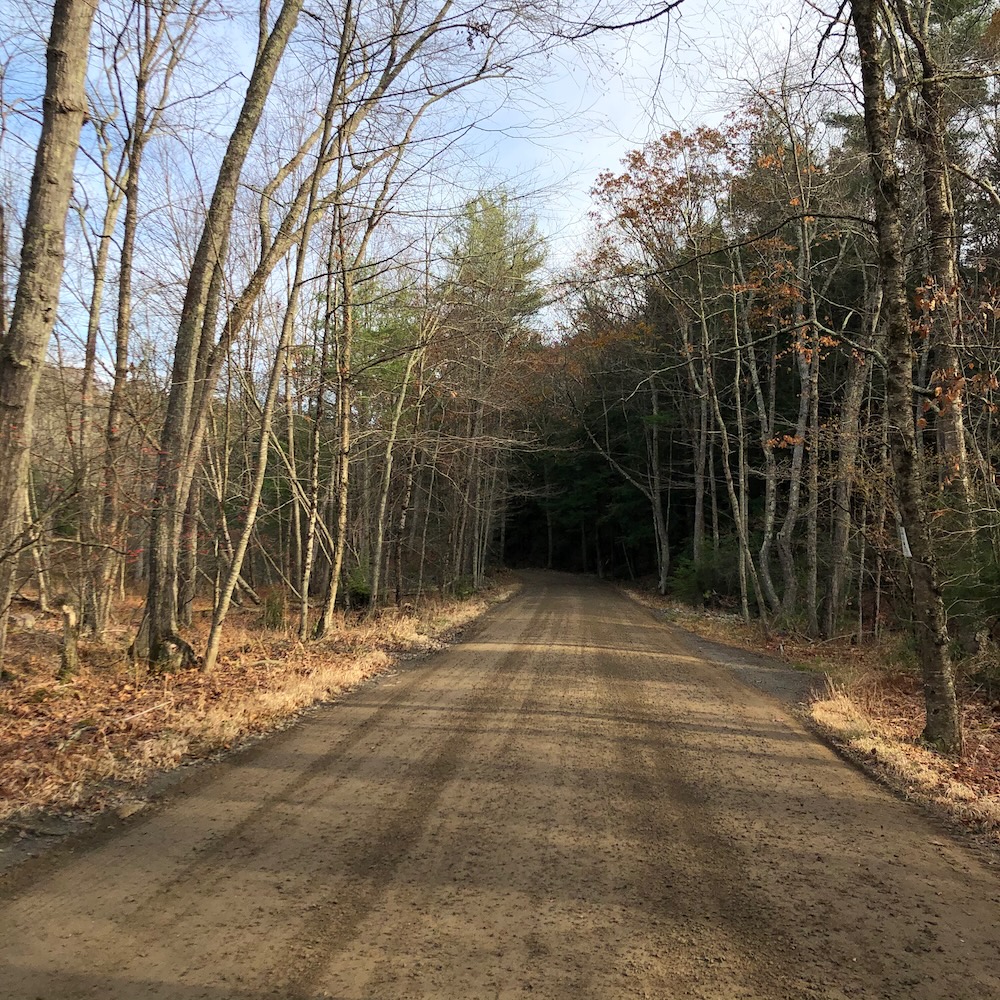 I promise, you’re not. There’s lots of beauty in these here woods – woods that are owned by Hull Forest Products, Yale University, and the state. In other words, this is a large unbroken tract of forest and I appreciate that.

I hiked the first half of this section out-and-back to Route 171 in 2020. It would be almost two years later that I would tackle the northernmost miles, but that’s life for me these days. With work and my son’s soccer… and as I get older and therefore less fit, I simply don’t walk as quickly as I used to. 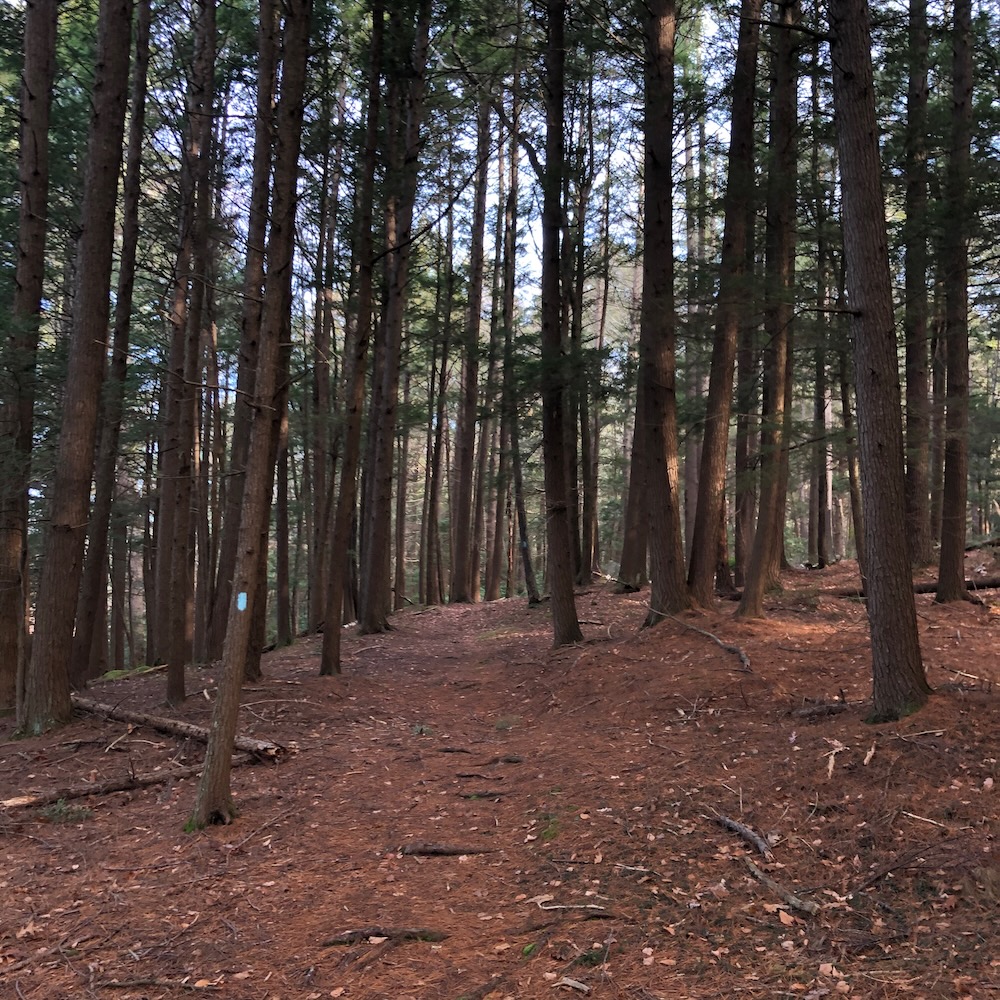 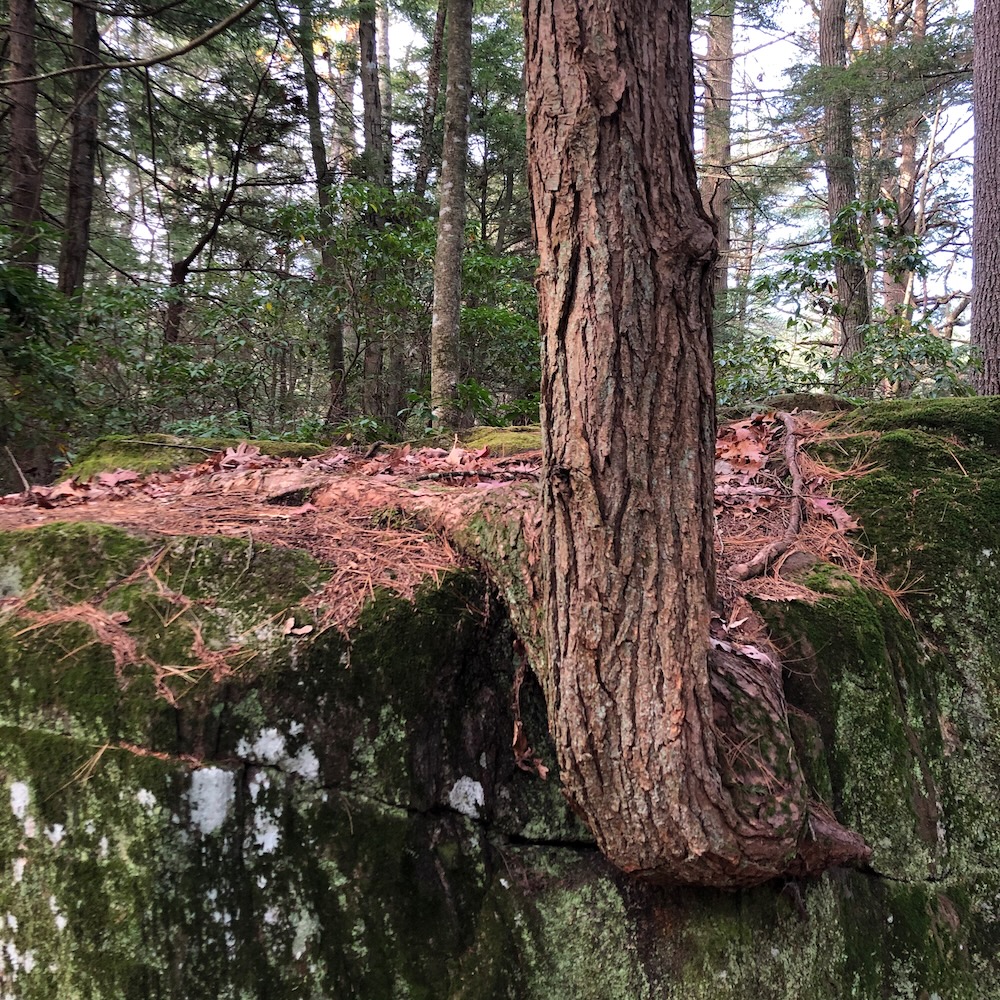 This section begins along Bigelow Brook and it’s very pretty. Huge pines, moss covered rocks, and mountain laurel dominate the first mile or so, but then the trail veers northeast away from the stream, crosses into Union, and the climbing begins.

Walker Mountain? Never heard of it. The climb is fairly long and steep but doesn’t summit the small mountain. There’s a spur trail to take if you really need to climb to the top of an unremarkable lump… I chose not to, as there is no view up there. I continued onward to Coye Hill and an outdoor classroom for Yale forestry students. 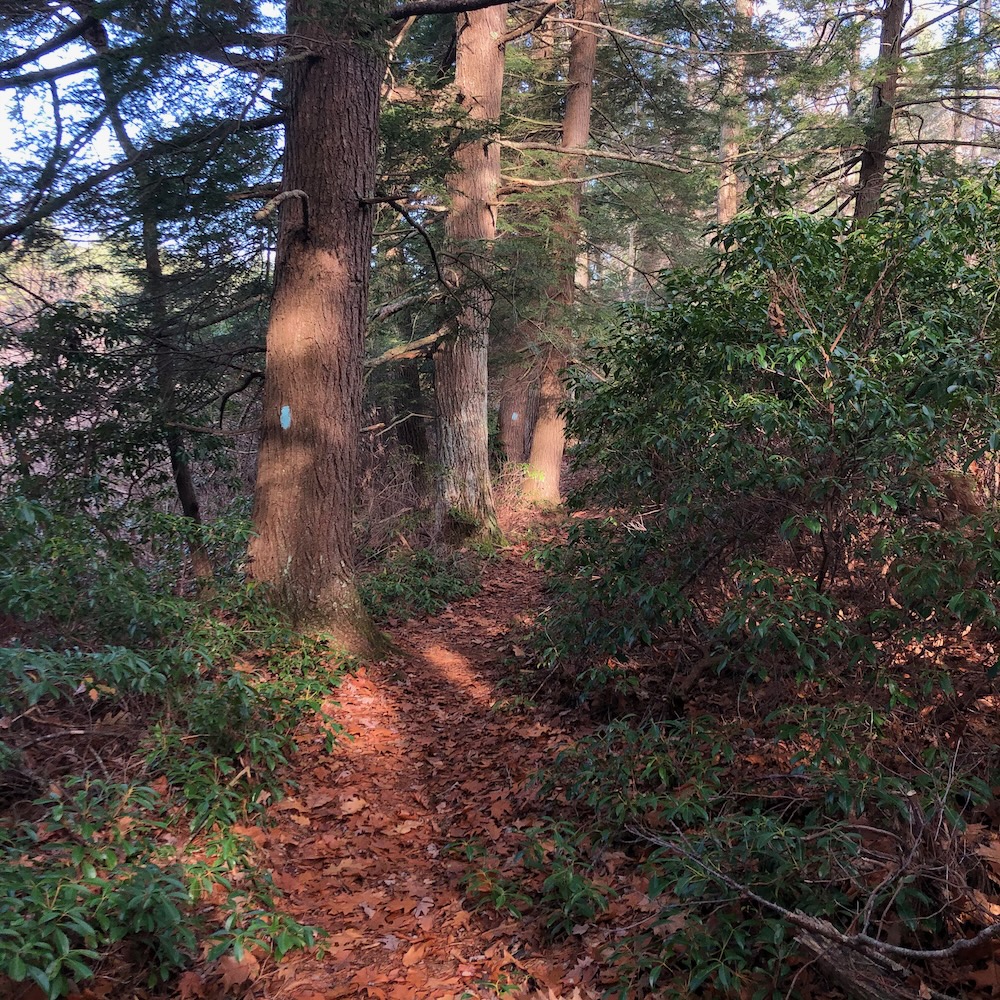 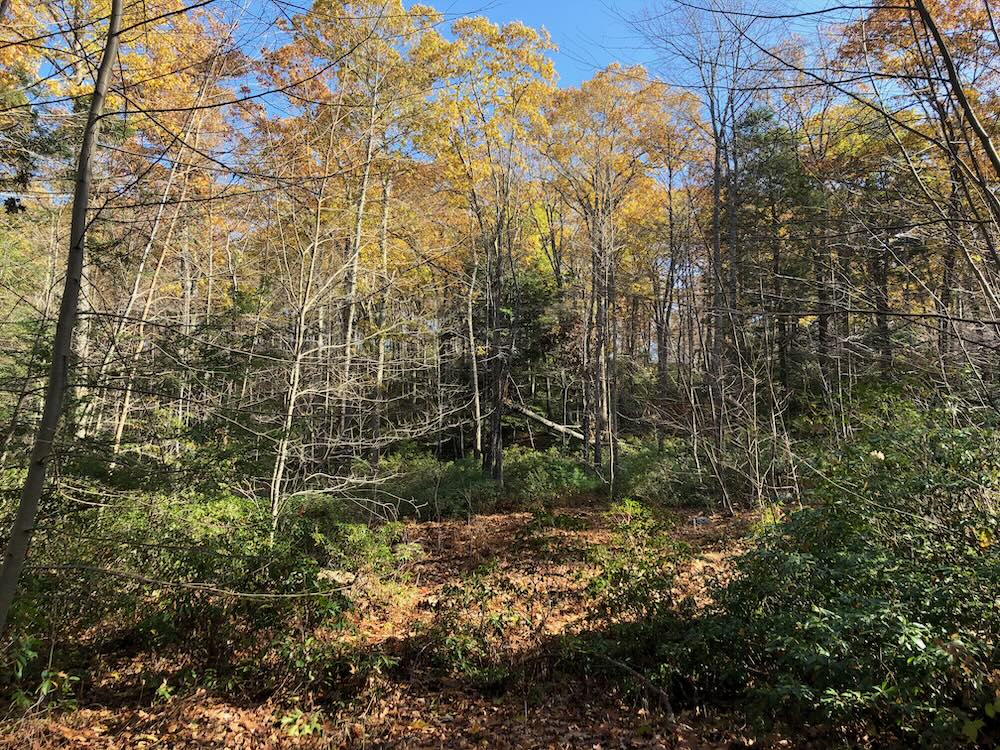 There’s a bunch of signs educating us non-Yalie hikers as to what’s going on, but I saw nothing I haven’t seen a hundreds times in Connecticut’s woods before. (There’s also a weird proliferation of graffiti which struck me as really odd way up here away from any human settlement.) I continued down the steep north side of Coye Hill – which does have some limited seasonal views thanks to the aforementioned culling – and eventually made it to Route 171 and Bigelow Hollow State Park. 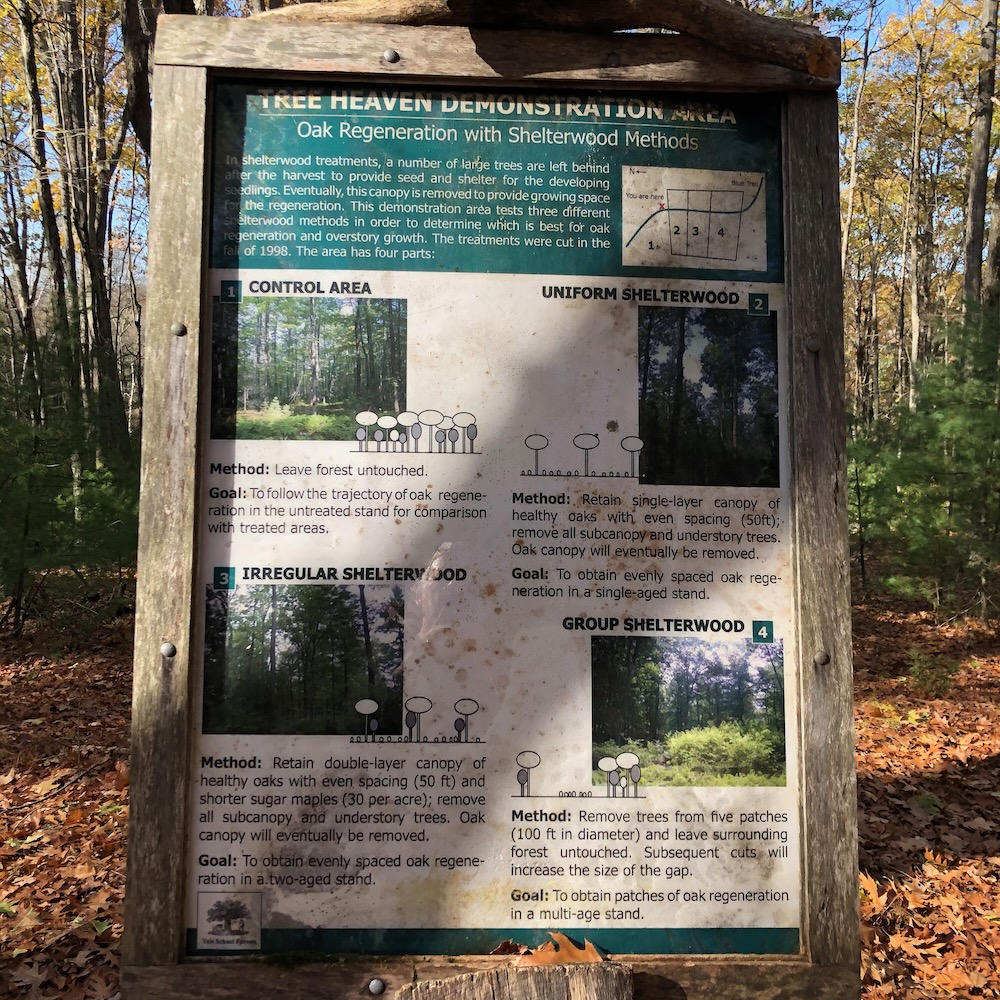 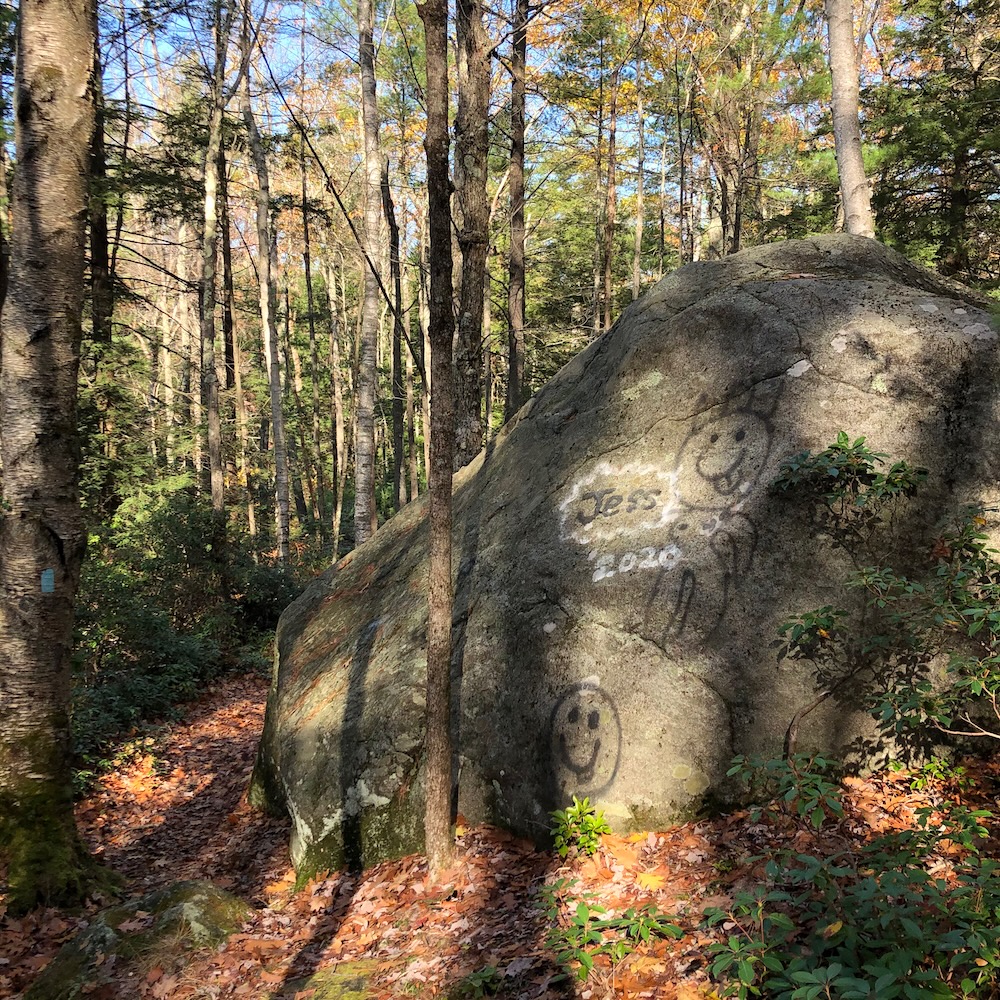 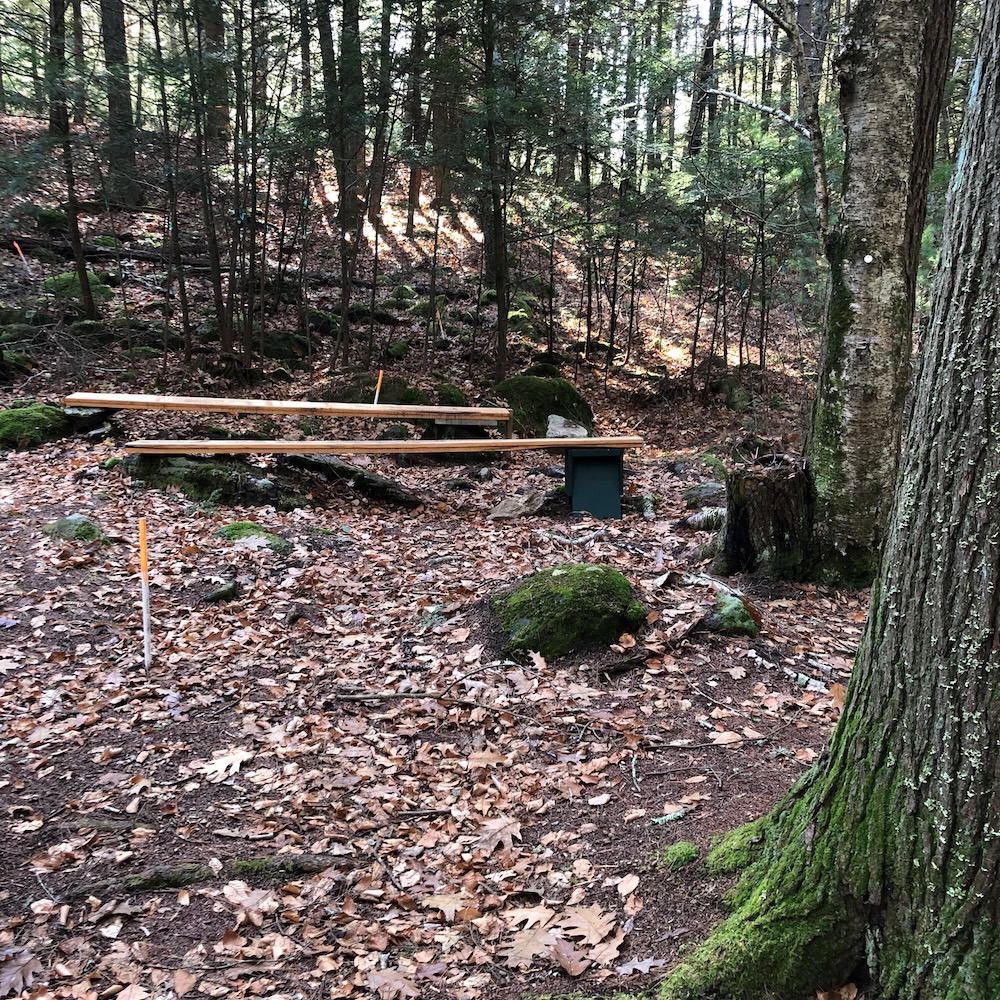 And that’s where I picked up the trail in the summer of 2022.

Most people consider Bigelow Hollow State Park to be the giant swath of land surrounding Bigelow, Mashapaug, and Breakneck Ponds. In reality, the state park is a pretty small parcel near the entrance and the rest is Nipmuck State Forest. But with over 20 miles of maintained trails – and 20 more of forest roads and snowmobile paths, it’s all considered one property by everyone. 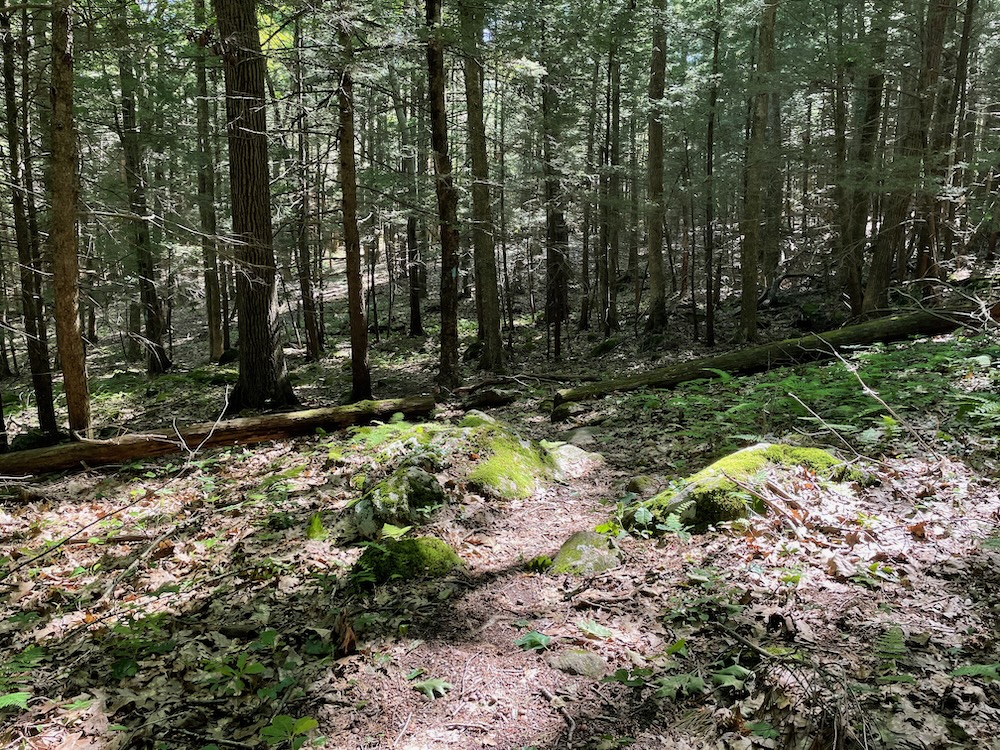 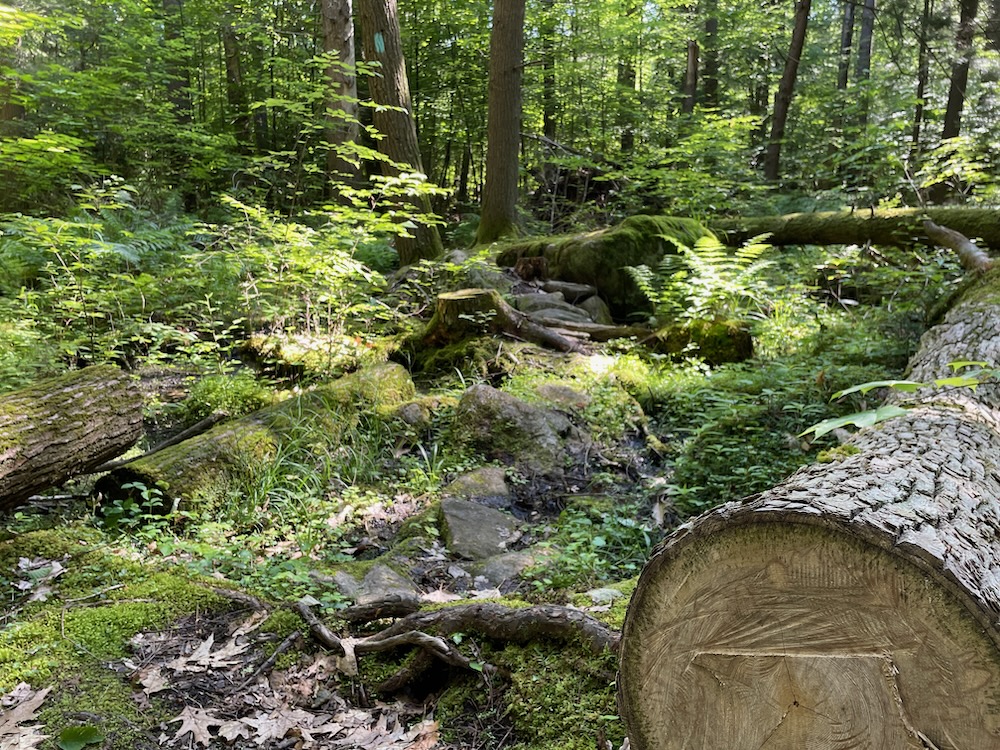 The Nipmuck Trail crosses Route 171 and enters the state park for all of five minutes, before continuing north to the Massachusetts border for 3.5 miles – all in the state forest. These woods are deep woods. I’m not going to say the trees here are old growth forest, but some of those I walked underneath could pretend to be. This is a beautiful patch of Connecticut.

And people get lost up here all the dang time. There are several versions of trail maps in existence, and I can see how people get turned around pretty easily. As I walked north, I came upon a fellow hiker heading south. He asked me how far it was to “the pond.” I politely let him know he was quite a ways south of the pond and heading in the wrong direction. 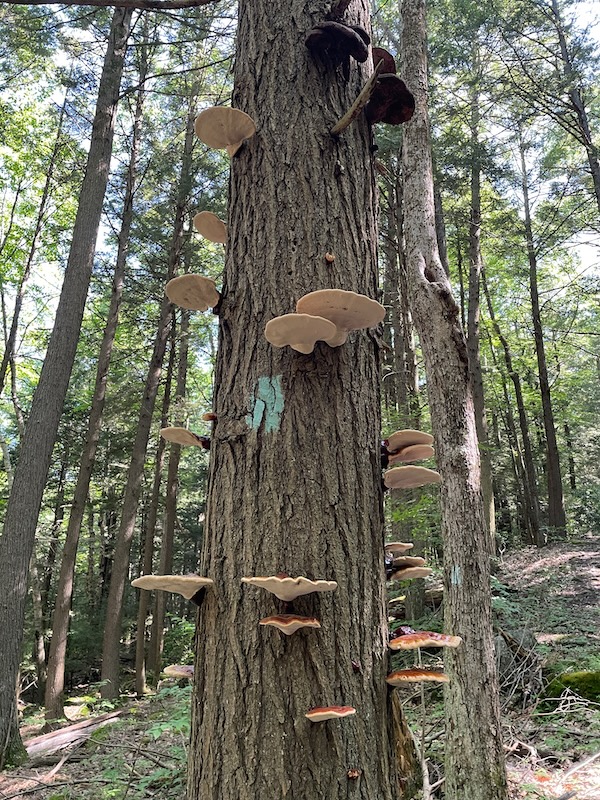 This was not news he was happy to hear. He seemed to disbelieve me at first, but once I helpfully pointed out that the sun rises in the east and had been to his left for the last mile, he was clearly walking south. I apologized for being patronizing, but at least I saved him from walking too many miles out of his way.

Now I had a hiking partner.

I don’t usually enjoy random hiking partners, but I felt responsible for my new friend’s success. He was on a recon mission north to find the pondside camping sites to determine if they were suitable for his future camping needs. He walked with a jangling bell (“to keep the bears away”), long sleeves, giant hat, and bug netting. My man was prepared… 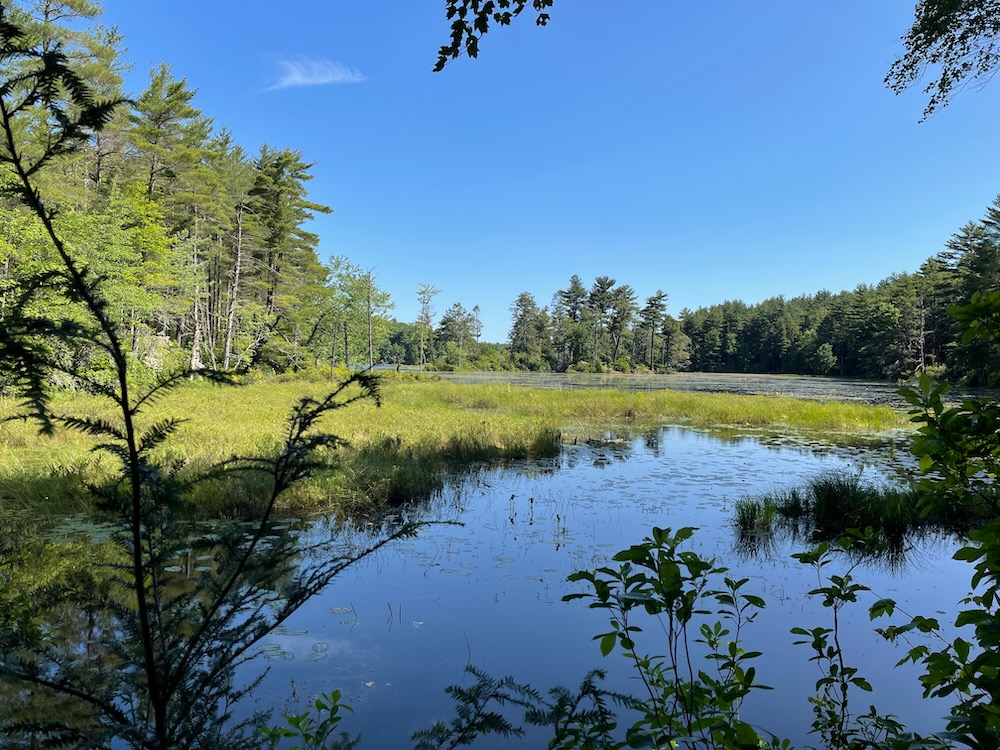 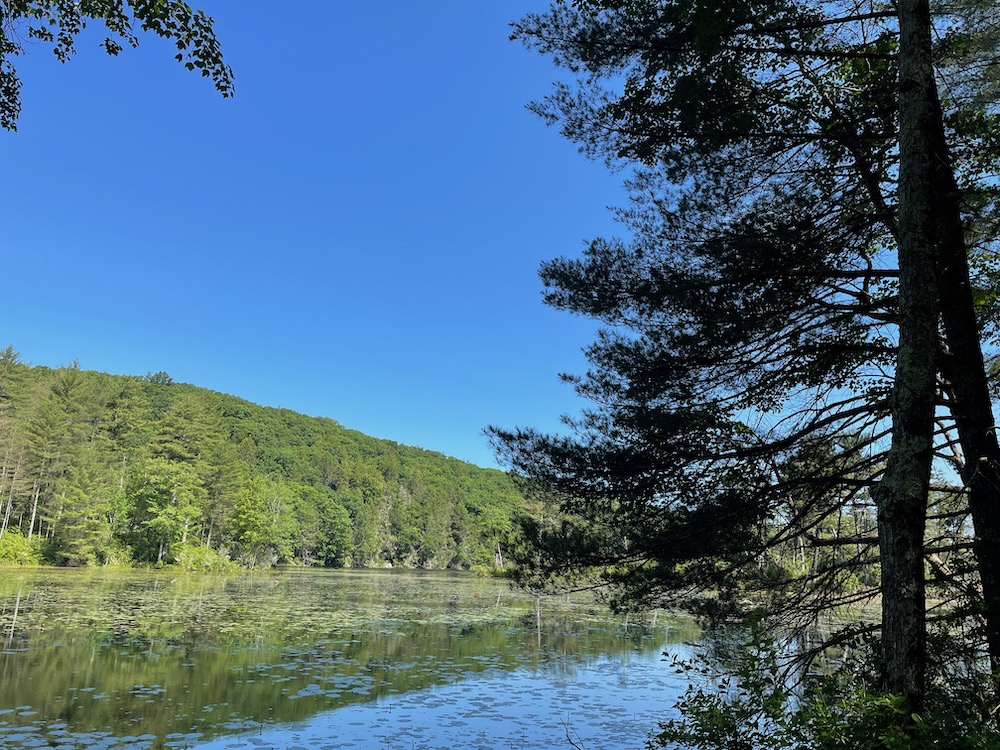 Except he was going in the completely wrong direction. So we walked together a mile or so up the trail, making small talk through his labored breathing on the inclines. I assured him that once he made it to Breakneck Pond, the trail hugged the shoreline for the most part and therefore there would be no more major ups and downs.

Once we reached a big trail intersection, I gave my map away and my partner headed west to the other side and I continued north up the Nipmuck. It took me a little longer than I’d anticipated to reach the pond, but once I did, hoo boy… it did not disappoint. If you’re looking for a beautiful camping spot, go here. (Just know that there’s no cell service up here.) 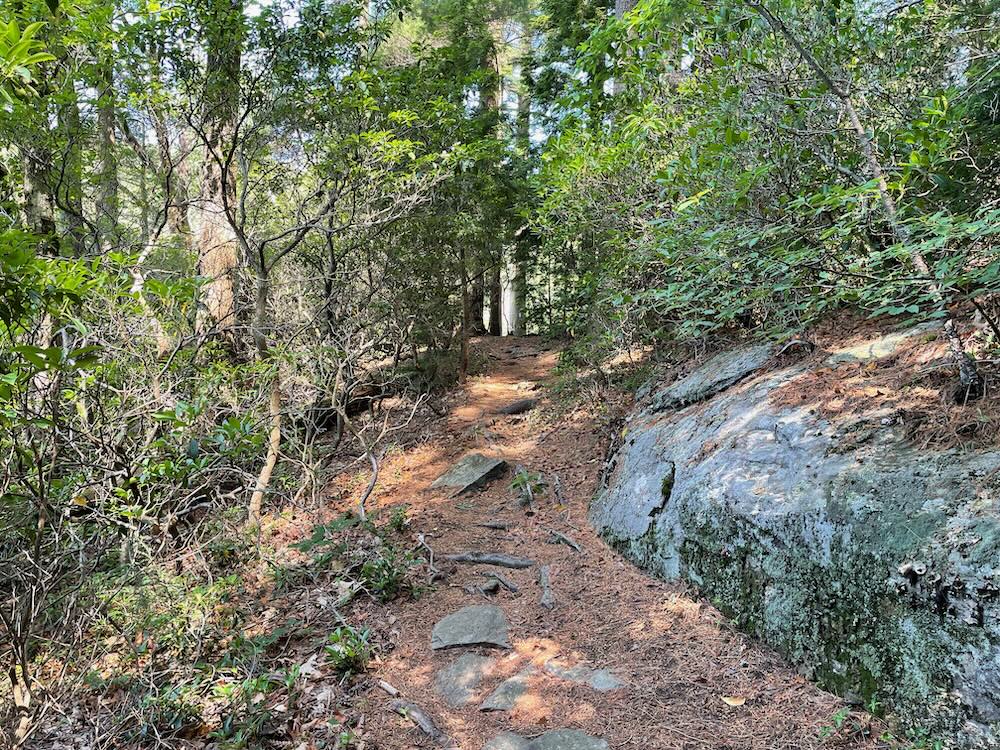 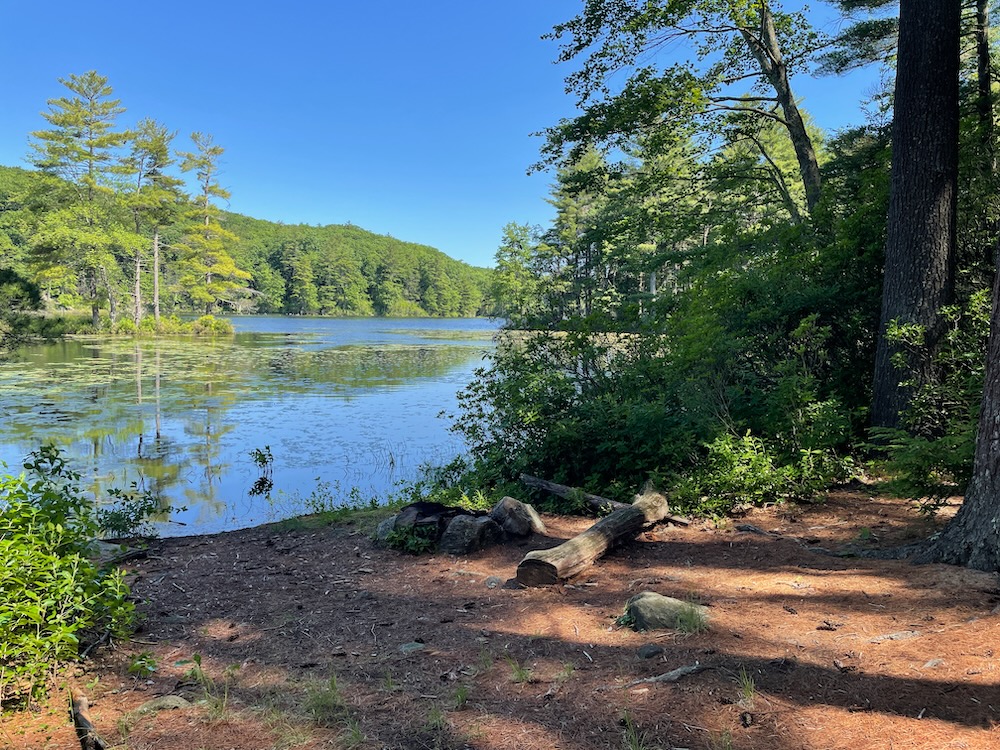 The state has created a few permitted primitive campsites next to the pond and since this is in Union, you’re going to find solitude. And you have to hike several miles to get to these sites (or several times two if you get turned around like my friend earlier), so because no one knows Union exists and only a fraction of those that do are willing to hoof it to camp out, you’ll likely have the woods to yourself.

I imagine these sites are perfect on moonlit autumn nights. There’s at least one lean-to shelter along the way here as well. 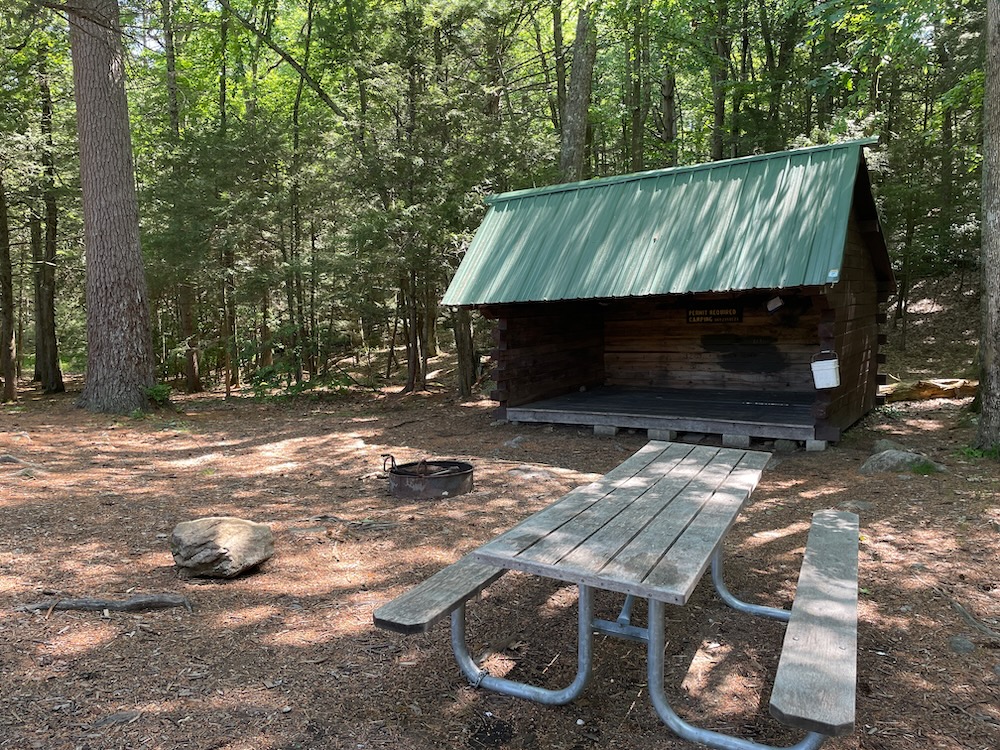 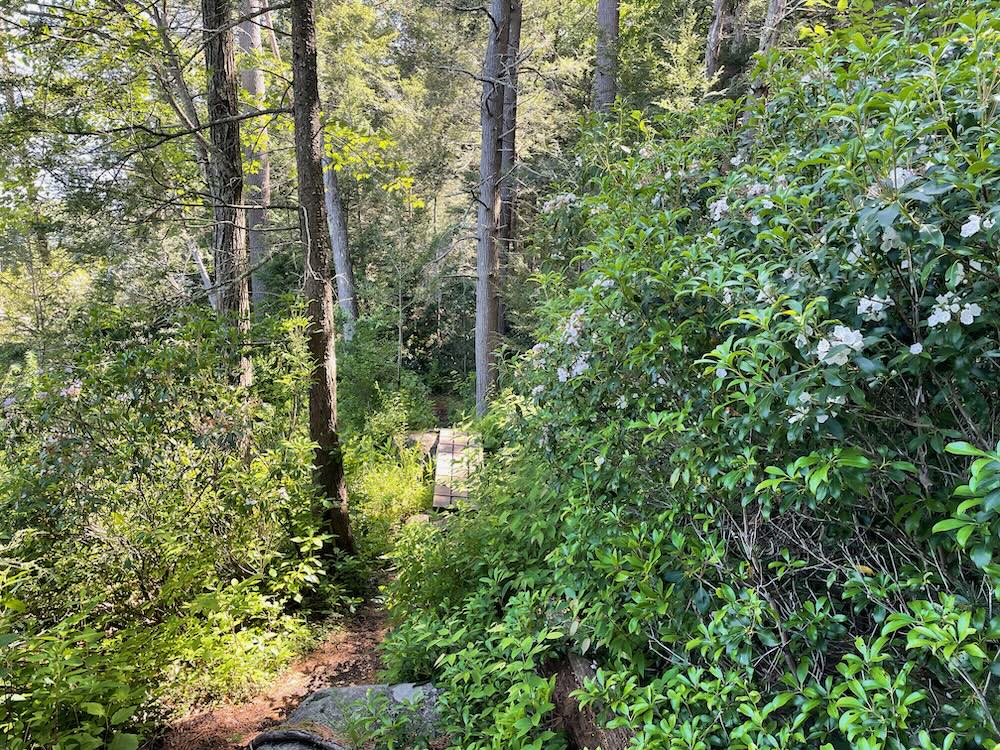 The Nipmuck hugs the shoreline for almost the entire final two miles to the state border. Pines, laurel, cool rock features, dozens of pretty viewpoints across the water. I love it up here.

The final few hundred yards of the trail are flat and straight up an old woods road. Sort of a tease after scrambling over rocks and roots for the past seven miles. And then, as trails often do, it… just officially ends. No fanfare and heck, there’s not even a sign. Just this: 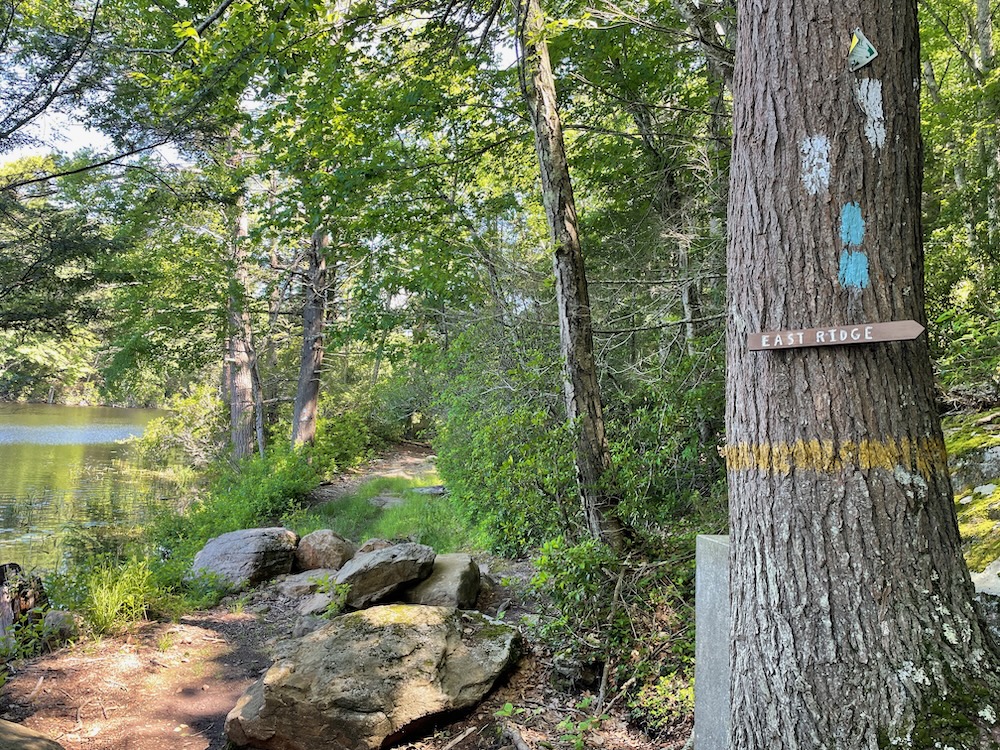 The double stacked blaze signifying the end of the blue Nipmuck trail. White blazes at the start of The East Ridge side trail. A yellow stripe signifying the northern border of the Nipmuck State Forest. And there, behind the tree, one of the hundred or so stone obelisk CT/MA border stones.

Now, as I checked out the monument I hardly felt “complete” in any way. I still had two southern sections of the Nipmuck to hike to complete the full Nipmuck trail, but more immediately, I still had several miles to hike to get back to my car. Even so, I felt a mild sense of future accomplishment… I guess? Is that a thing? Sure, that’s a thing.

Bigelow Hollow State Park and the Nipmuck State Forest up here are wonderful. Remote, rugged, and as pristine as you’re going to find in Connecticut. That is the state of the Union, and I love it. 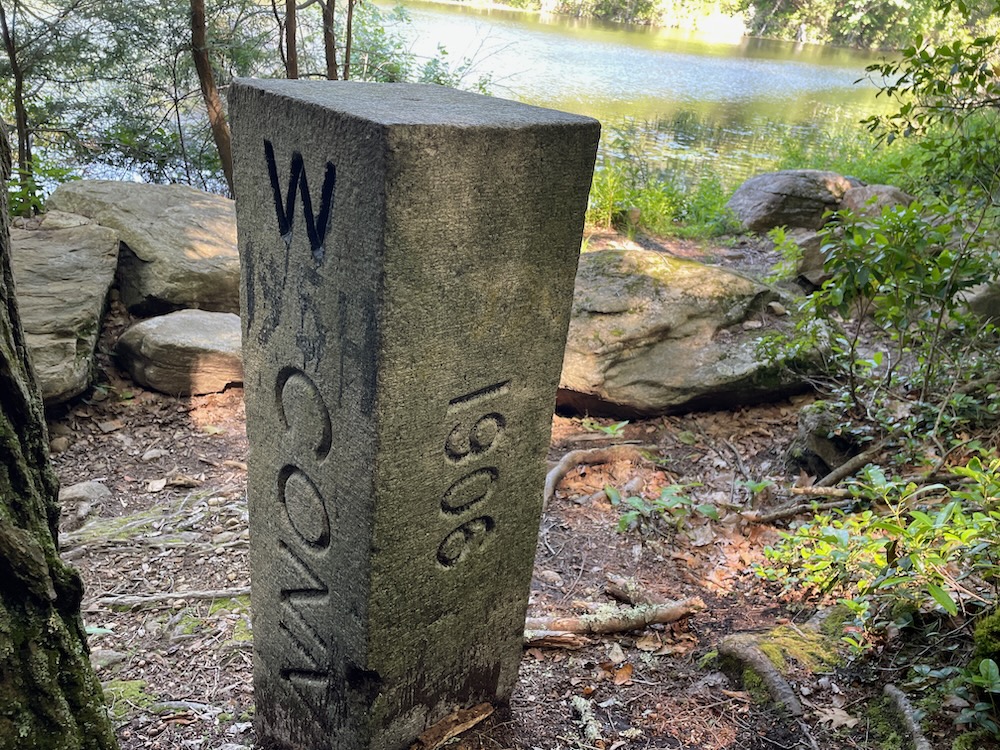 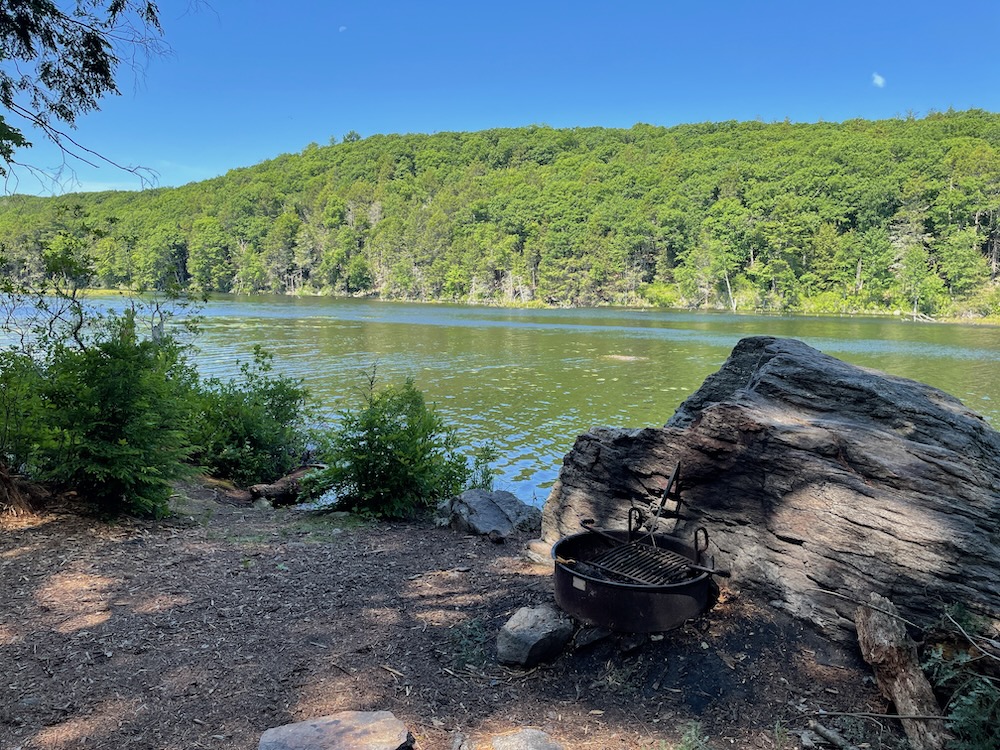