This place is also called Brownstone Adventure Park which is a much better name.

I’ll say it: Brownstone Exploration & Discovery Park is probably the most fun place in Connecticut on a hot and sunny summer day. As long as you know how to swim, aren’t afraid of heights, have a modicum of athleticism… and don’t get tired. 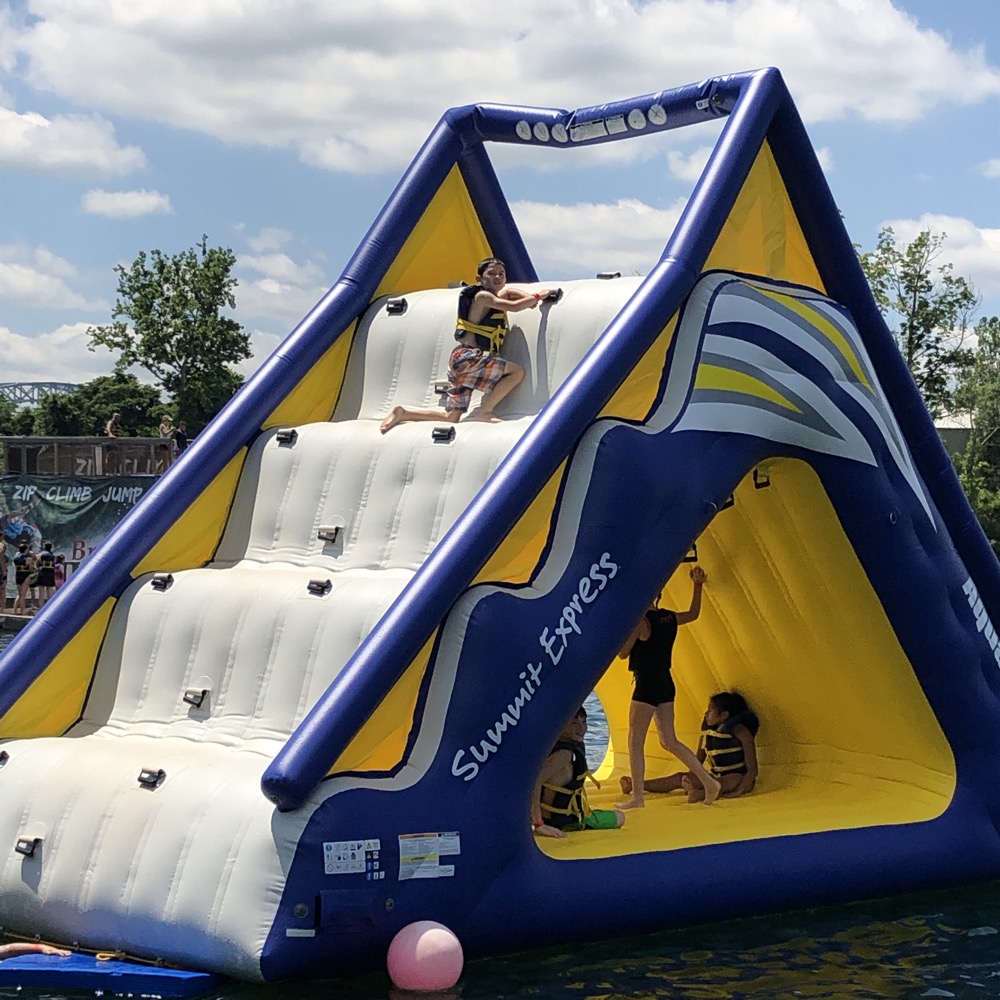 I’m struggling to order my thoughts for this page. The brownstone quarry is stunning in its size and massive cubic walls. The history of Portland brownstone is vast and storied. The quarry is a National Historic Landmark and rumor has it that the family behind the water park is opening a small museum here as well. 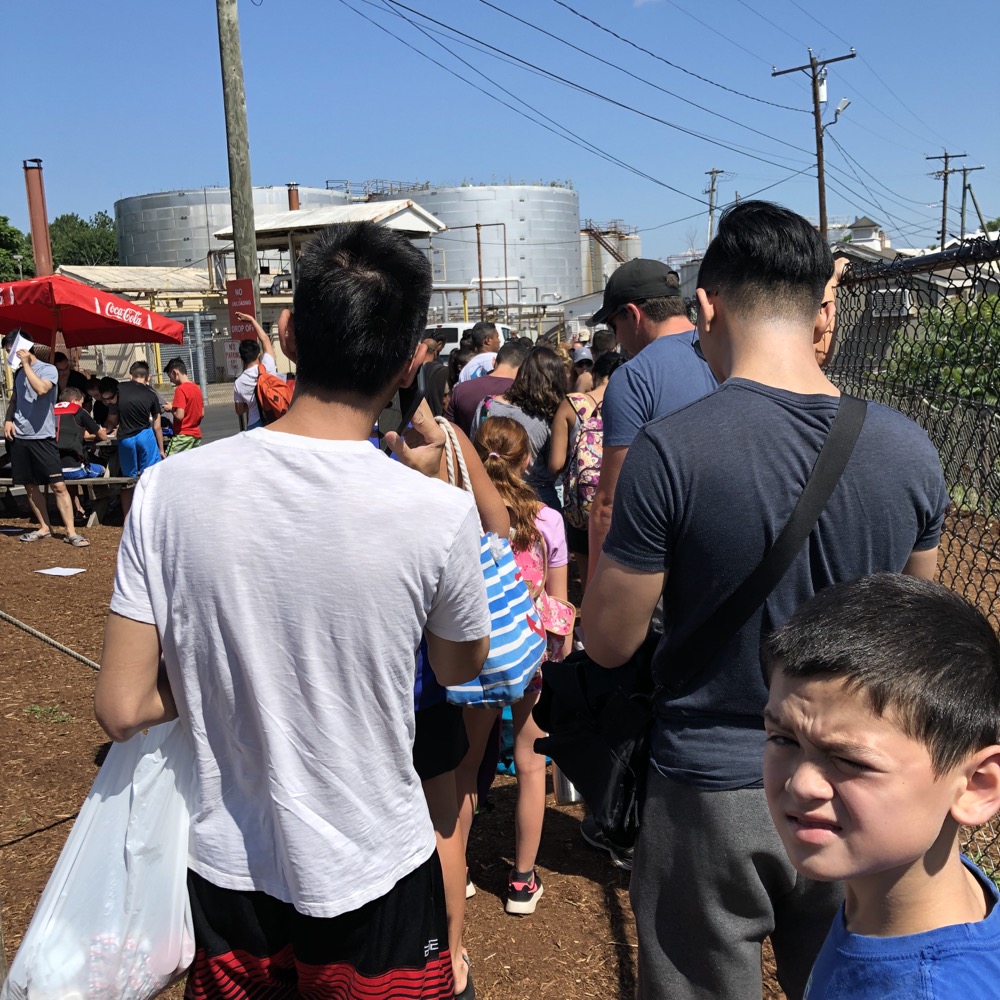 The entry line was not super fun

I’ll leave the history of the quarrying for another page and just stick to the park here. In a word, it’s great. It’s also wet.

And because I was in the water for many hours, I was not able to take many pictures at all. I had all of our snacks and belongings in a locker, and to go back to it over and over would have been annoying. Not to mention the fact that one must swim to get to many of the attractions here. 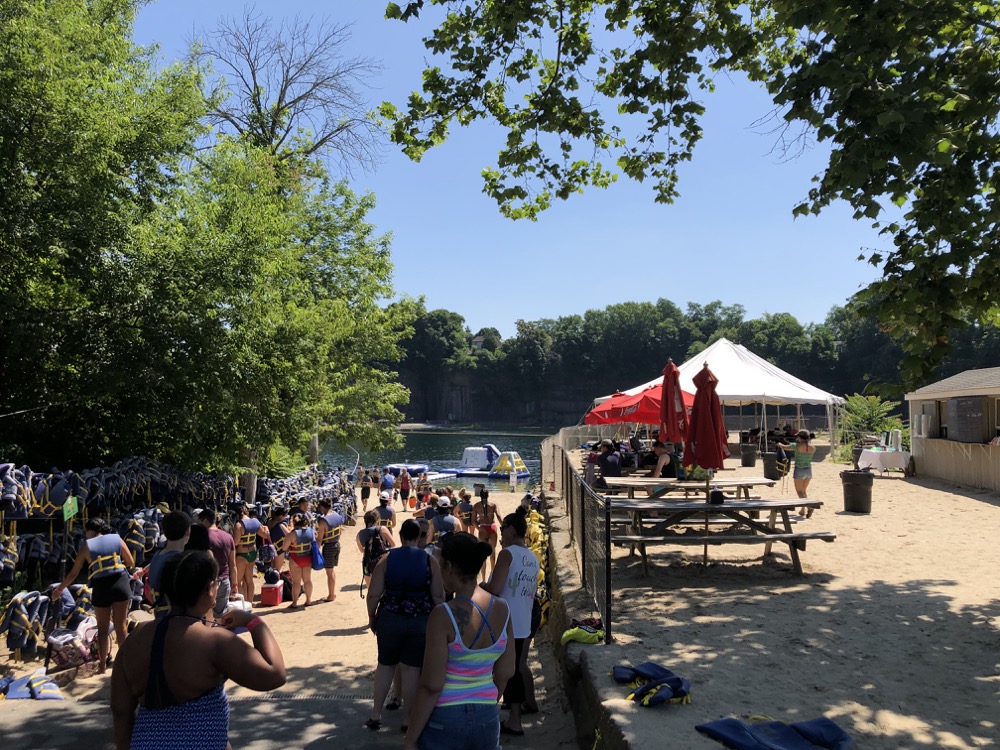 And I loved that – you have to work to get to a lot of the more thrilling things here. And we worked. Over and over, we worked.

Calvin is a huge fan of ziplines and Brownstone has five. Only one would be considered “short,” and it’s 450-feet long. Some drop riders into the water, some into cargo nets. A couple start on top of very, very high cliffs. Like this one: 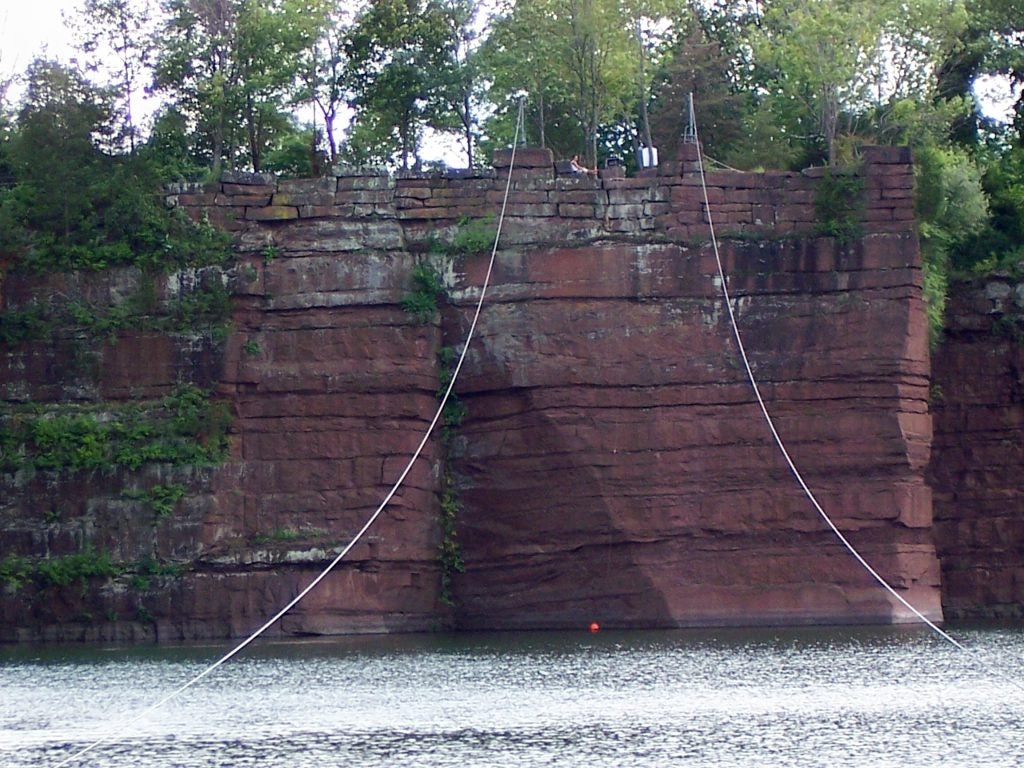 One set of ziplines is only accessible by rock climbing an 80-foot wall… and there was an age requirement there, so we didn’t do that one.

I’m not sure if Brownstone caps ticket sales per day, but it was not overly crowded during our visit – on a hot, sunny, summer Saturday. We had to wait in short lines for the ziplines and the like, but nothing too crazy at all. 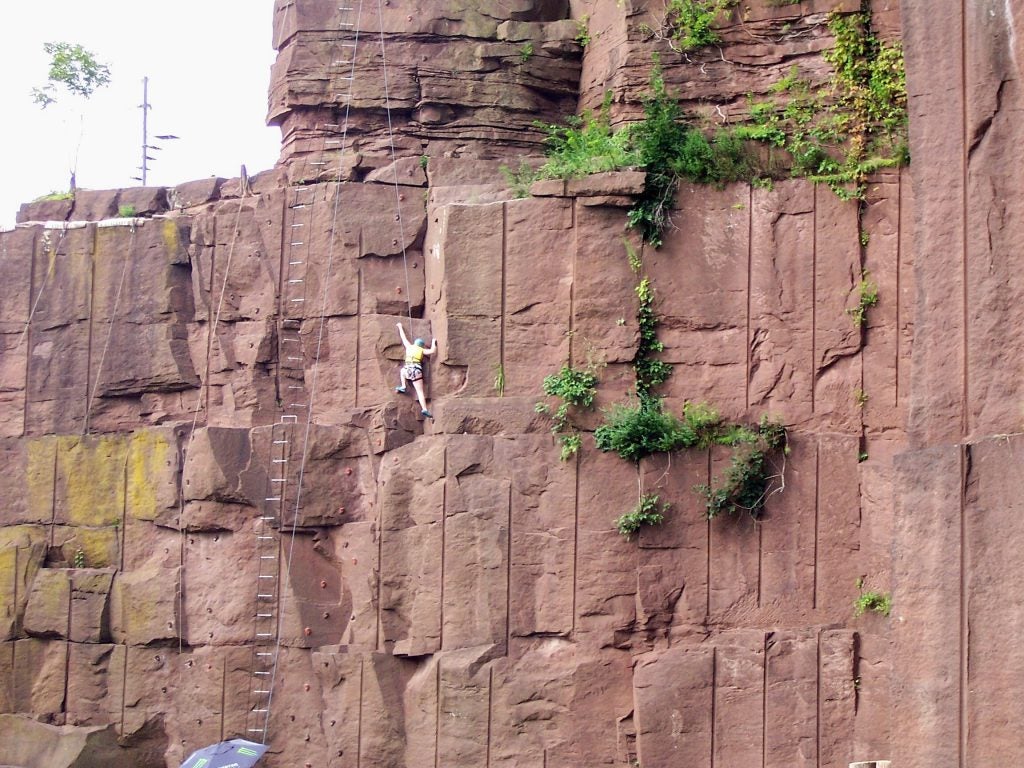 And speaking of crazy… my son is crazy. While there are cliffs here that reach 80 to 100-feet, there are designated cliff-jumping cliffs that are a bit safer. There’s an 18-foot jump and a 30-foot jump. One must be 18 to do that latter.

On our first pass, Calvin walked right past the “little” 18-foot jump and straight to the 30-foot one. He was, of course, turned away but the mere fact that he confidently walked up there was hilarious to me. And trust me, 18-feet is plenty high. 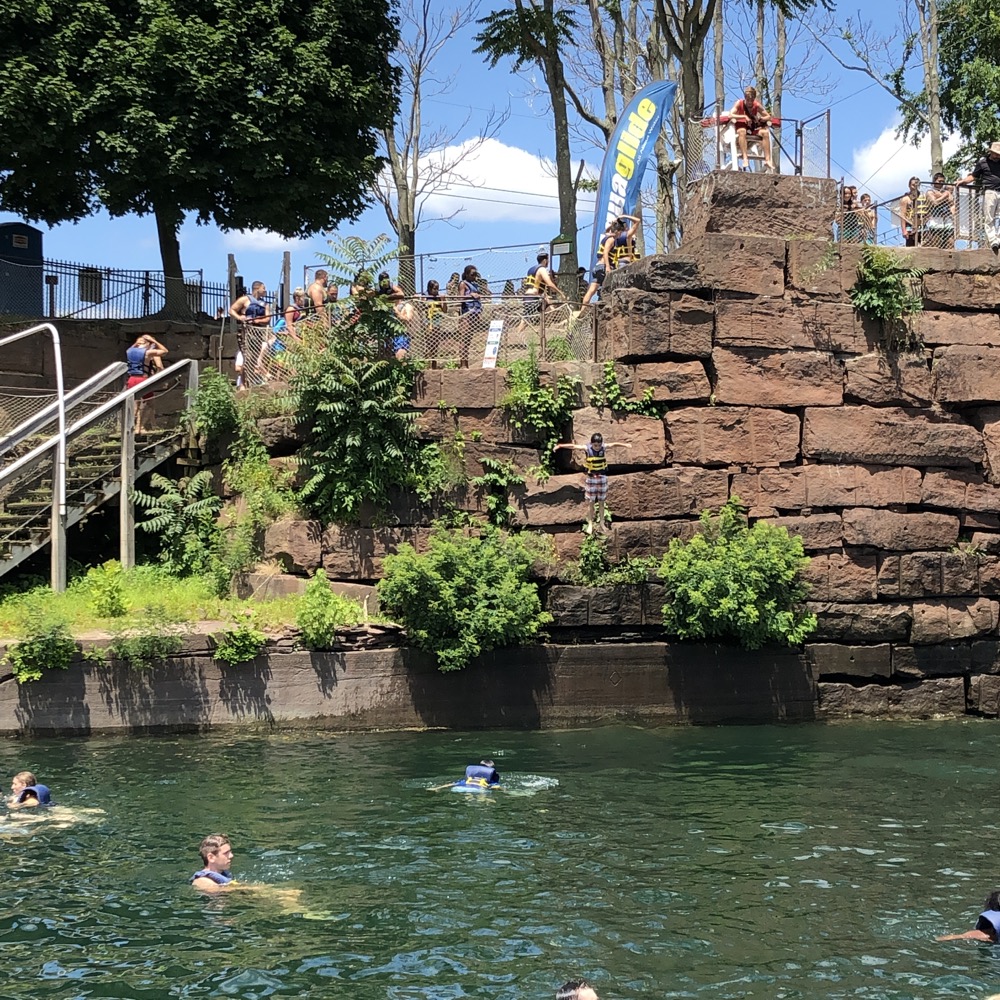 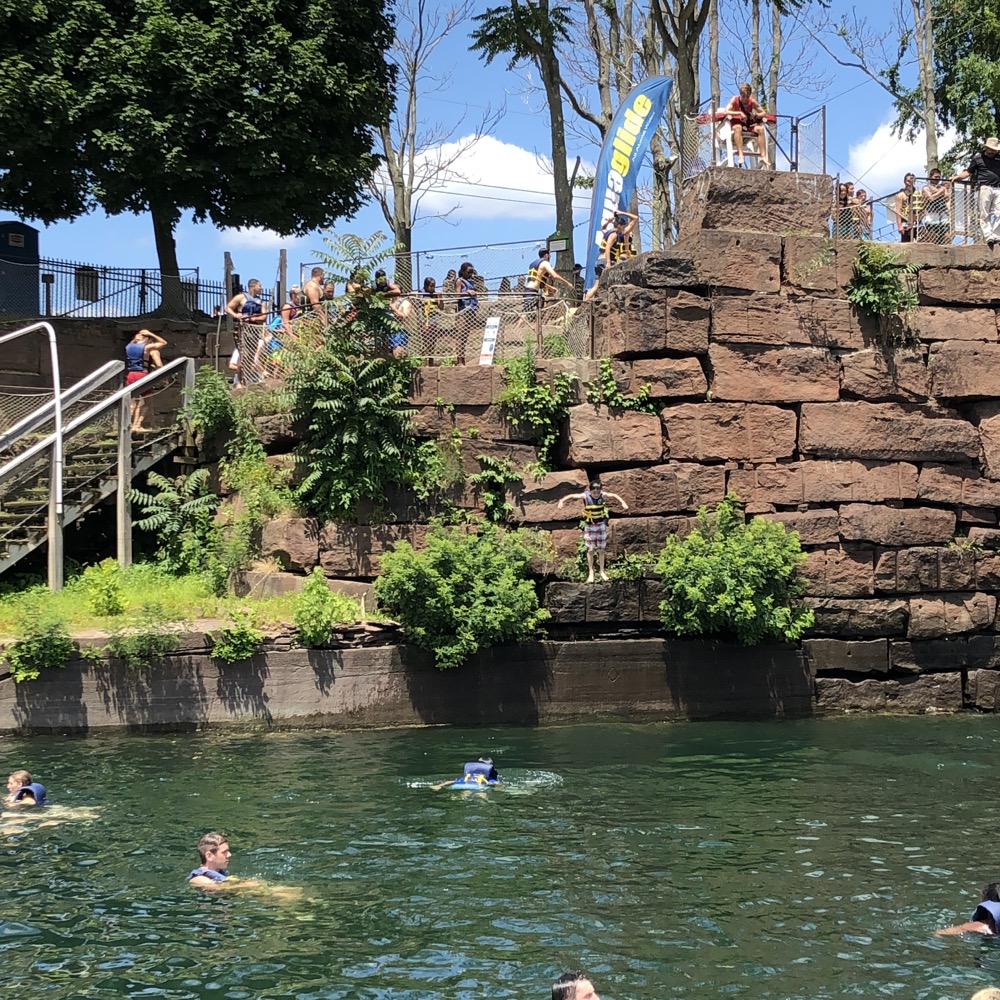 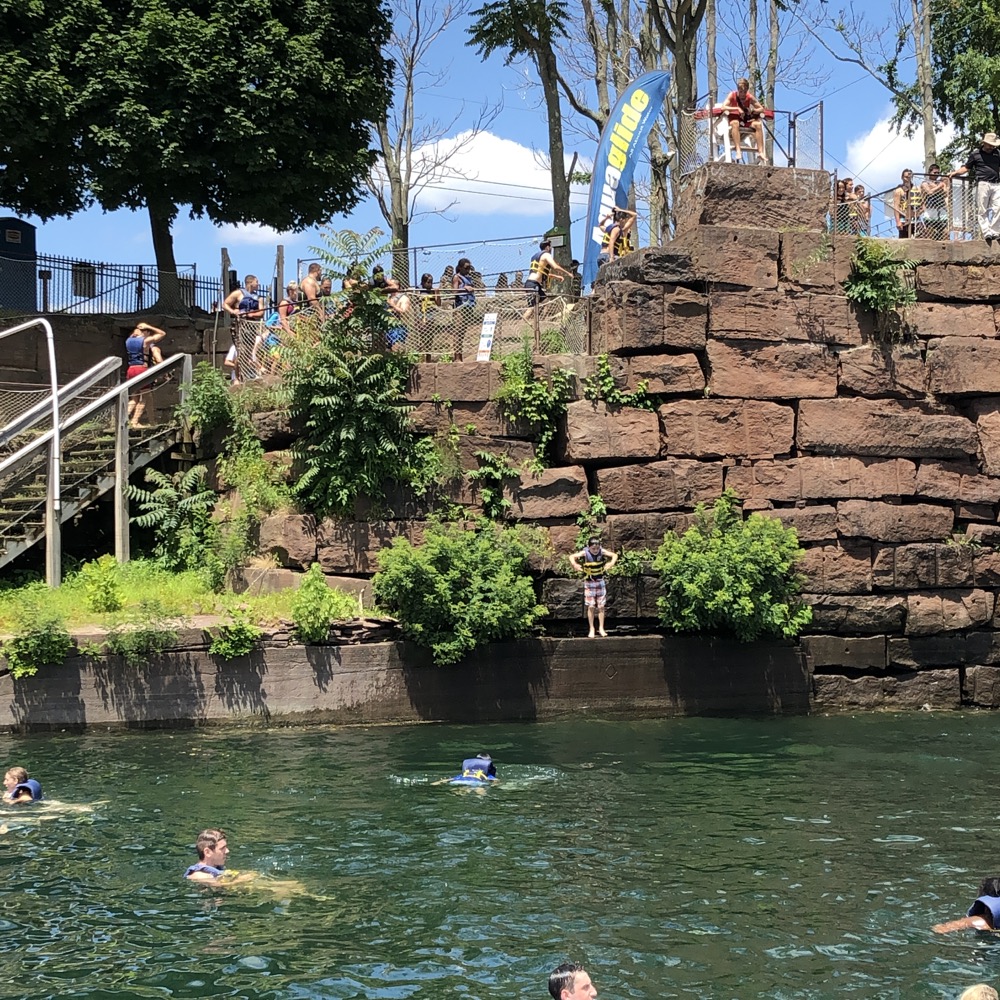 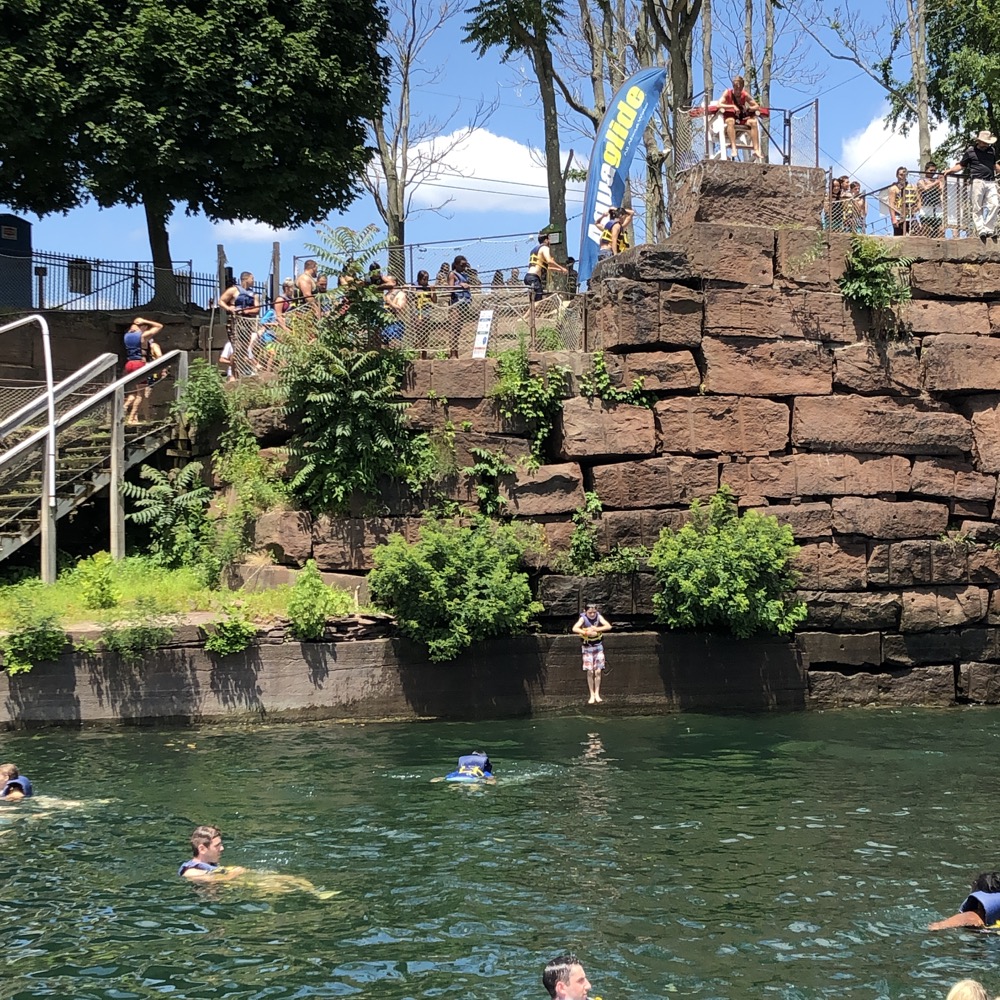 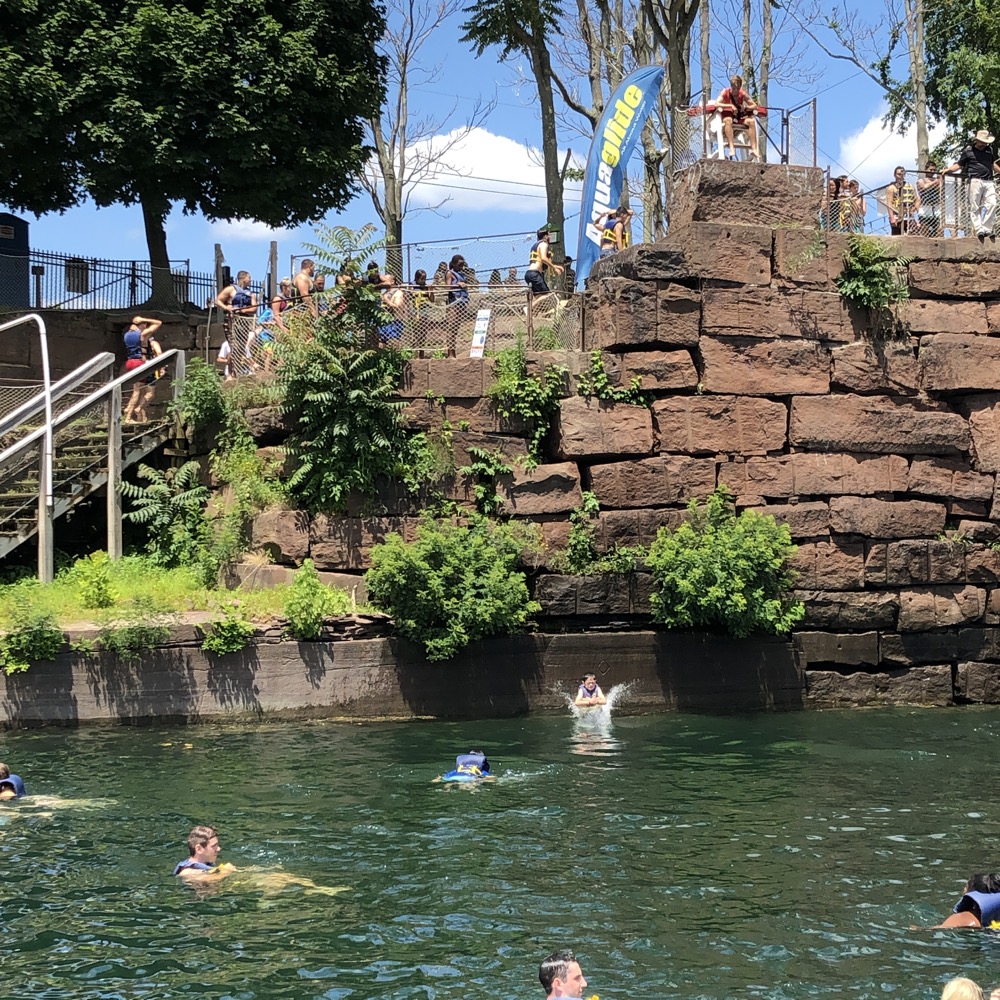 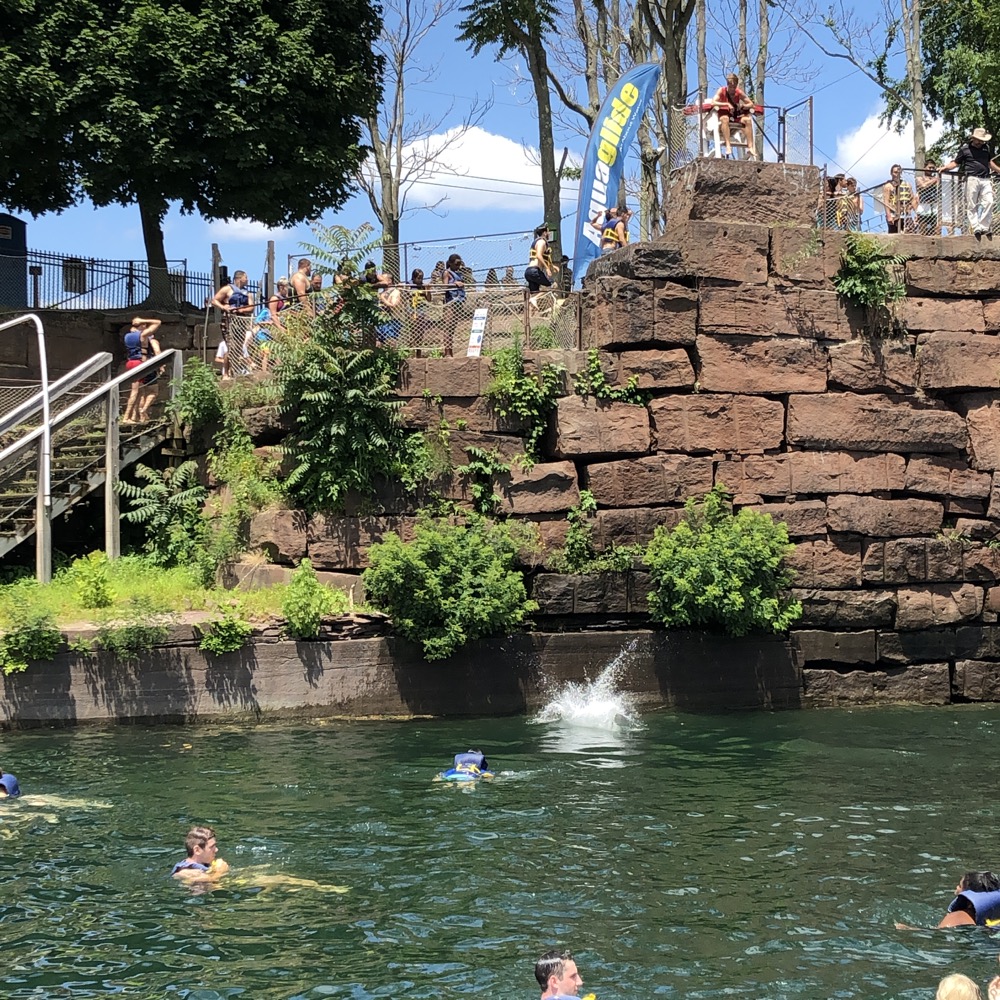 After that jump (or maybe the third time), Calvin swam over to me and I showed him how to take the same series of pictures of me doing the big jump. We practiced and he did pretty well, so I swam over, climbed up, waited my turn – which wasn’t too long, as not too many people do this – waited to see Calvin hold my phone up… and jumped.

He got a lovely series of pictures after I had hit the water and began swimming back.

30-feet is pretty high, man. I leaned back off my vertical axis a little bit and hit more of my butt than I’d have liked. It didn’t feel great. I imagine people get pretty bruised up from this jump. 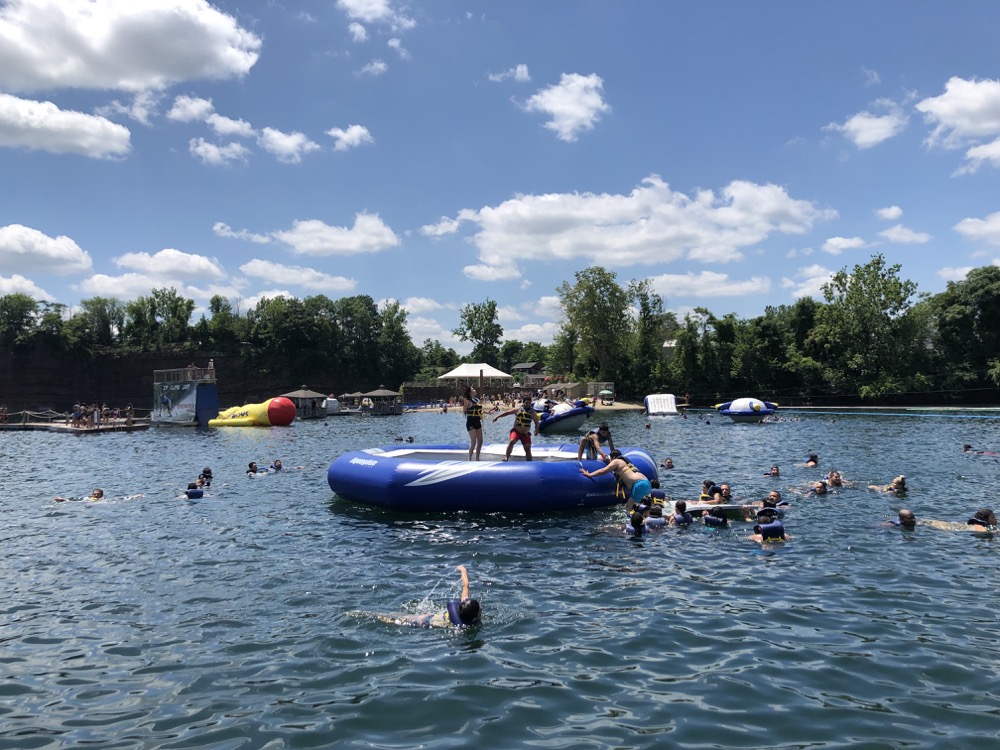 There are a bunch of safer and “easier” bouncy things in the swimming areas. There’s one of those launchers which is pretty nuts, and a bunch of climbing and jumping things. Calvin couldn’t get enough of them, spending literally two hours swimming back and forth, climbing and conquering, making friends, leaving friends, launching friends, dunking friends… it was all pretty great.

At one point we made our way to a rope swing at the far end of the park. You know, the kind of thing that requires upper body strength and coordination? The swing was high up as well… probably 20 feet or so. Calvin was actually hesitant with this one, but once you’re in line here, backing out is a pain because you have to complete obstacles to get in line in the first place. 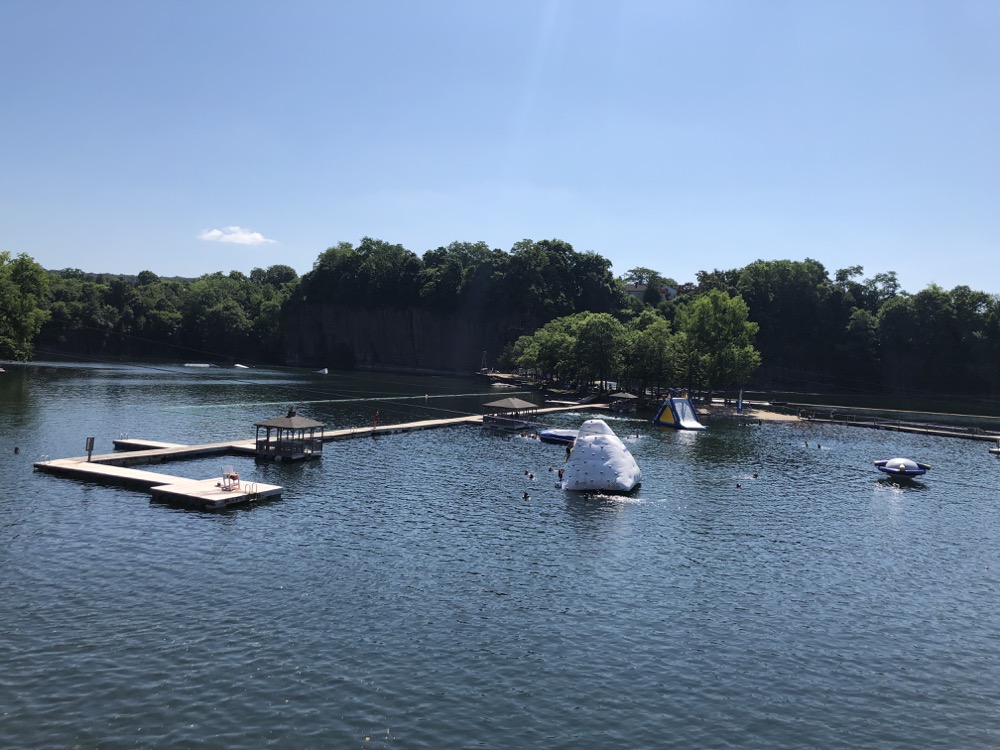 So he went for it and did great. Weighing only 55 pounds or whatever makes these things easy. Weighing over 200 does not. I did not do great and ended up losing my grip and falling prematurely into the water… which, tradition here dictates, garnered me a round of boos and laughs.

I deserved it, but Calvin was sad for me. Oh well. Nothing another 1,000-foot zipline or giant waterslide wouldn’t cure. In the northern part of the cove, Brownstone offers other activities like scuba diving, snorkeling, wakeboarding, canoeing and kayaking but we didn’t do any of that. Hey, after six or so hours, my body couldn’t have done that stuff anyway. 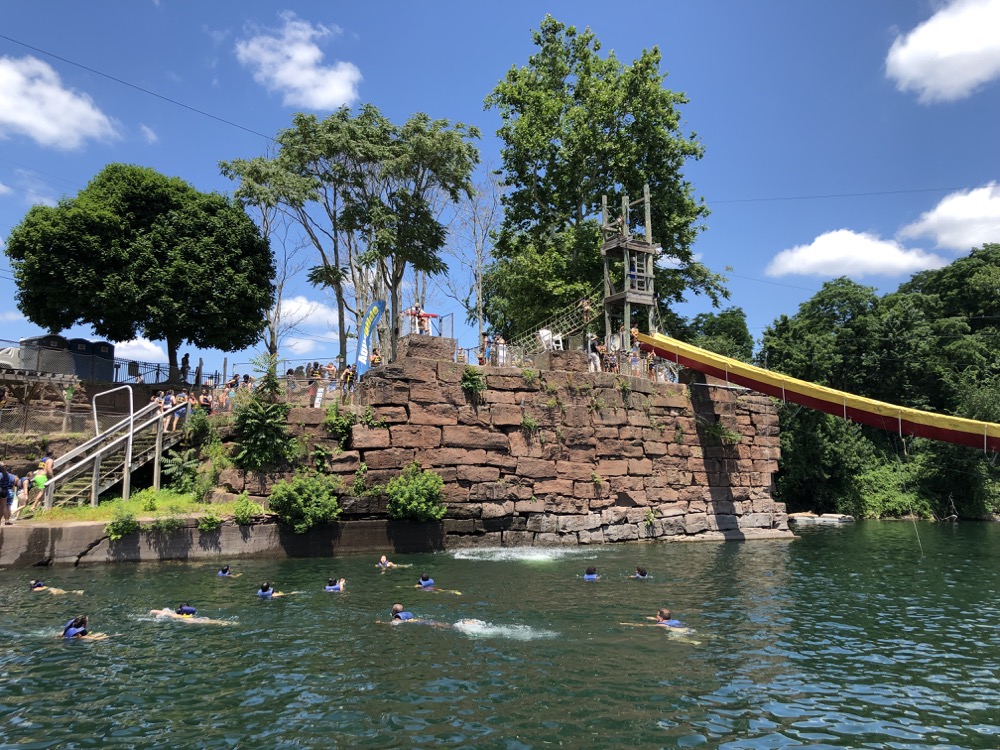 During our day at the quarry, I spared Calvin the history lessons, but they are important and interesting. The stone from these quarries was used in a number of landmark buildings in Chicago, Boston, New York City, Philadelphia, Baltimore, Washington, D.C., New Haven, Connecticut, and Hartford.

I’m too tired even after thinking about all the climbing and swimming we did at the park, so I won’t get into the history of Portland brownstone right now. If you’re wondering, I felt that the park does a good job with safety. Of course anyone can get wrecked here in a variety of ways, but if you’re not an idiot, you’ll be fine. 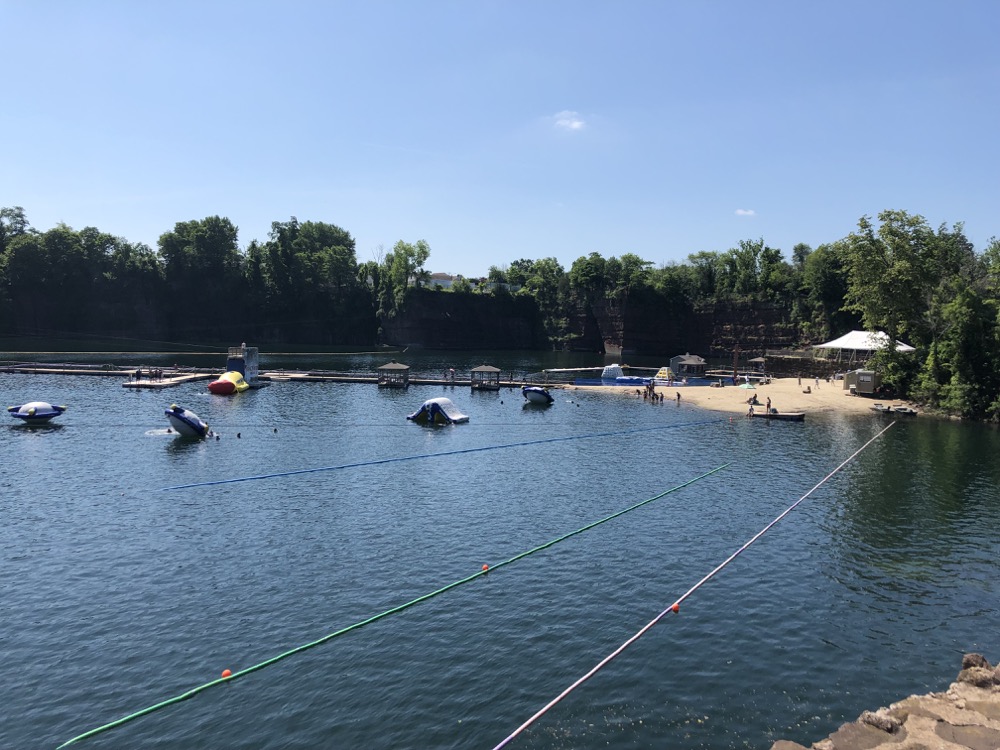