I Got My Thrill, at Cedar Hill
Cedar Hill Cemetery, Hartford & Wethersfield
June 9, 2007

This page does not do Cedar Hill justice. There are so many luminaries buried here and so many stunning monuments, but in 2007 I just didn’t have the ability to capture it properly. Still, it’s worth reading. 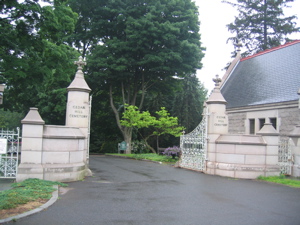 The day dawned gray, gloomy, quiet, and foggy. Drizzle fell intermittently and the clouds touched the ground. It was the kind of morning where the few birds that were chirping, seemed to chirp in a loud, lonely and discontented way. In short, it was the perfect morning to visit the historic Cedar Hill Cemetery in Hartford’s extreme south end. I really don’t have much interest in cemeteries and visiting all the so-called important ones throughout the state would only serve to bog down my CTMQ mission. But Cedar Hill is different… Very different. And well worth the visit to say the least.

“I have never seen the spot that has so many advantages as this or so splendid a landscape…
— Adoph Strauch, noted landscape architect in reference to Cedar Hill Cemetery

In fact, I’ll go so far as to say that any sight-seeing visit to Hartford should include this tour. The guide was a lovely older lady who clearly loved the cemetery and was a wealth of knowledge about it. Cedar Hill is a true “rural cemetery” in the sense that it was built away from the city and once inside, you’d have no inkling as to how close any urbanization actually is. It was purposely designed in 1864 to be romantic and park-like, rather than your rudimentary cemetery. In a word, it’s beautiful. The landscape designer, Jacob Weidenmann, went on to write Modern Cemeteries wherein he explained that his cemeteries were designed for the living and not the dead. Fun facts: Weidenmann is buried here AND he also designed the gardens over at the Butler-McCook House, which EdHill and I visited back in December 2006. 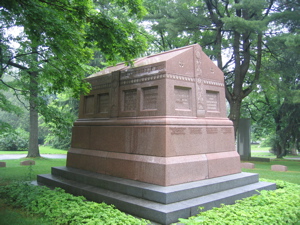 I think the most striking difference between Cedar Hill and some other cemeteries you may be more familiar with is that they disallow any fences or copings around grave sites; this allows for a much more open space and better flow while you walk about. The superintendent is entirely responsible for the flora and he does a great job. Also, there are no roads anywhere near the grave sites – in fact, 65 acres separate the cemetery from the busy Wethersfield Avenue.

The large stone archway out at the entrance was designed by a George Keller; the same George Keller who designed the Memorial Arch near Bushnell Park – also in Hartford. Fun Fact # 2: Keller hated cemeteries so he was cremated and his ashes are within the arch. I could spend all day with these types of facts – there are a million here at Cedar Hill, trust me. I’ll try to limit them. 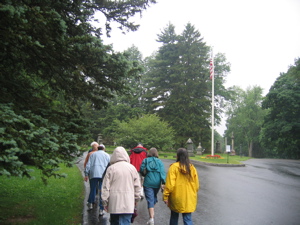 Every once in a while the Cemetery Foundation offers free tours to cheapskates like me so I waited until one popped up for me to attend. Despite the weather (the air was so wet with humidity, the drizzle didn’t really matter), there were several others that showed up for the tour. June 9th was CT’s “Open House” day and there were literally hundreds of free and discounted museums and events around the state. I had planned a full day of MQ’ing and this was my first stop – I was full of vim and vigor. Granted, cemeteries aren’t typical places for vim nor vigor, but I can’t help it sometimes.

I arrived right on time (of course, that’s how I roll) and we walked from the gathering place up a slight incline to the first stop of the tour. Why, it was none other than good ol’ Horace Wells! You remember Horace – the first dentist to use Nitrous Oxide before performing surgery? Hartford native who became a drug addict and creepy nutcase chasing prostitutes around New York? If you forgot, then you should reread our visit to the Menczer Museum of Medicine & Dentistry which has a nice display about Mr. Wells.

Wells’s grave is really quite amazing… Especially in light of his infamous drug addiction – he is rumored to be Robert Lewis Stevenson’s inspiration for Dr. Jekyll and Mr. Hyde. 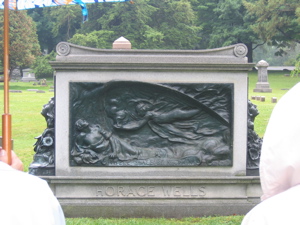 Quite lovely, yes? Here is one end of the monument: 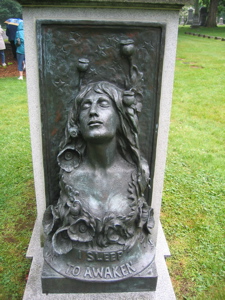 Yes folks, those are heroin poppies with the hippy trippy line, “I sleep to awaken.” What about the other end? 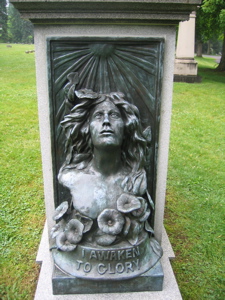 “I awaken to glory” with a bunch of morning glory flowers. (If you didn’t know, eating morning glory seeds causes hallucinations.) I was digging this tour already; this was some dark stuff.

We walked a little further up a hill and came upon a massive cross bearing the name of Terry. Terryville, CT (part of Plymouth) is named after this guy (Eli Terry, Sr., the famous clockmaker) but what’s cool about his monument was that it is one giant piece of granite stuck on top of a block. It is so perfectly balanced, carved, and heavy that it rests without danger. We hope. 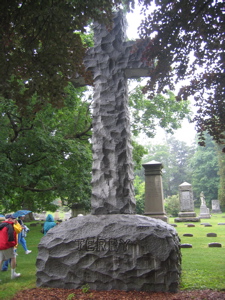 When I took the picture below, I thought two things: One, it was Thomas Hooker who founded Hartford and two, wouldn’t it be funny to have a picture of a large monument to a Hooker? 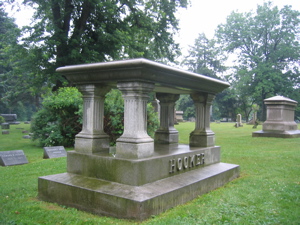 Now, writing this two months later, I realize that this was merely a descendant of Thomas Hooker and with so many “Hooker” things in and around Hartford, it’s really not remotely funny. But there you are; there’s a dead Hooker or two at Cedar Hill.

Up next was my favorite monument I saw. I know nothing of the man other than what you can see – his name was Russell. But it takes a special person to immortalize himself in perpetuity with a gigantic full body self-sculpture. I hereby state I would like the same. This is just awesome: 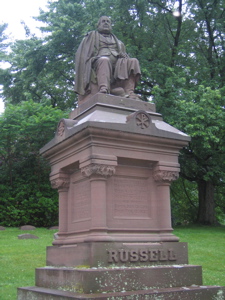 Finally up to the top of the hill is the striking pink Scottish granite monument for Samuel Colt, inventor of the revolver. One of Hartford’s most famous son’s, his wife Elizabeth bought one of the first large plots at Cedar Hill and designed his monument herself. This in turn led all of Hartford’s society to follow suit which is a big reason why Cedar Hill contains so many works of art rather than just boring gravestones. 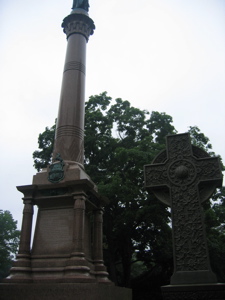 The monument for the guy who invented the “Gun that won the West.”

Then we came upon the absolutely beautiful monument for a fallen Civil War soldier, General Griffin A. Stedman. My photo below does not do the carving any justice as it was smooth as butter and really quite stirring. General Stedman was only 26 when he died at the battle at Petersburg. I hung back from the group for a few minutes just appreciating the artistic skill it took to carve this monument. But then it was on to yet another Hartford VIP: Morgan Bulkeley. 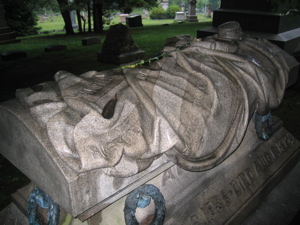 Before Bulkeley died in 1922, he was president of a little company named Aetna, governor of Connecticut, and Major League Baseball’s first commissioner. In addition to being memorialized here at Cedar Hill, he’s also in the Baseball Hall of Fame in Cooperstown. And has a bridge. On the way to the next stop, we passed Cynthia’s grave. It freaked me out: 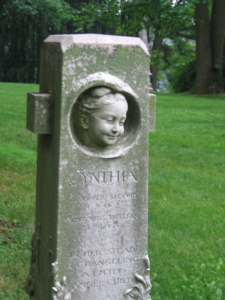 We saw a pink granite pyramid for a guy named Mark Howard and yet another super famous Hartfordite’s gravesite: JP Morgan. Morgan was so rich that at one point, he personally saved the US from bankruptcy. As opposed to those greedy Rockefellers, Morgan was more into philanthropy. He had guards at his monument site for many years after his death. Who could upstage Colt and Morgan? I’ll raise you with none other than Katherine Hepburn! Yes, she’s buried here in a small hidden away shaded little plot that I found quite tasteful. Good for her I say, good for her. 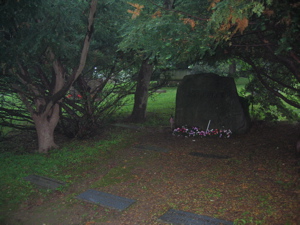 “I have many regrets, and I’m sure everyone does. The stupid things you do, you regret if you have any sense, and if you don’t regret them, maybe you’re stupid.” – K. Hepburn

Before I get to the last monument that I found interesting, I should mention that some other dignitaries buried here include Thomas Gallaudet (founder of the first school for the deaf in the US), Gideon Welles (lots of stuff but notably buried a slave he freed at Cedar Hill, opening it up to minorities), Charles Hamilton (first night flight among other things), and Gilbert Heublein who founded the company that brought us the wonders of Smirnoff vodka, A1 steak sauce, and lots and lots of different boozes.

The last monument I enjoyed was for a guy named Yung Wing. It’s okay if you’ve never heard of him – unless you’re from China. Because apparently the Chinese idolize Wing. Wing came to the US in 1872 and attended (and graduated from) Yale. After that, groups of 30 Chinese boys attended school here and learned the latest in technology and engineering. They took their knowledge back to China and spread the word. This went on for years until Yung Wing married a rich white girl from Avon named Mary Kellogg. This freaked out China who immediately stopped the student program for fear of their boys getting too Westernized. To this day, large groups of Chinese actually come to this gravesite to burn incense and to give offerings out of respect. I thought the whole story was pretty cool. 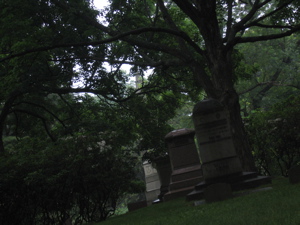 The terrible off-kilter picture here was my attempt at the “thumbs up” picture in front of Wing’s monument. For some reason the timer wouldn’t work right and my little set up wasn’t the best – and it was raining fairly steadily so I didn’t keep trying. Something tells me the Chinese technology and engineering students would have been able to set up a much better shot; perhaps one that I appear in at least.