I know you’re eyeing these pictures warily and wondering if I’ve lost my mind. Or, more accurately, if the author of Connecticut Waterfalls has, since it’s his list I’m following.

And, on the surface, you’d be right to question us. After all, this “waterfall” looks as though it bursts forth from a culvert under Main Street with existential graffiti emblazoned on it. 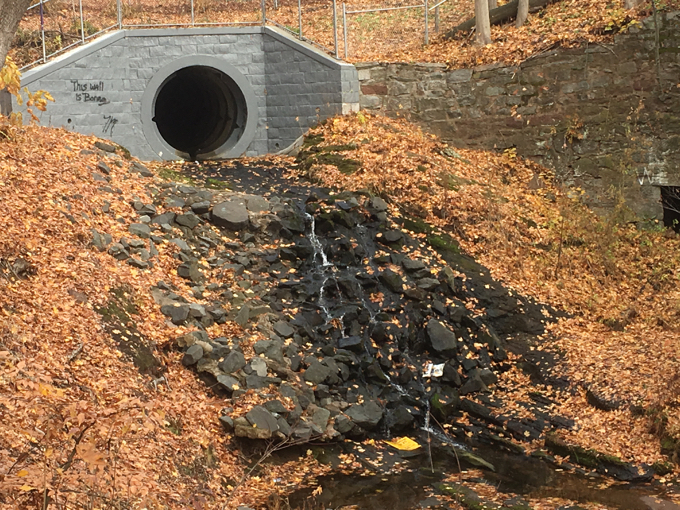 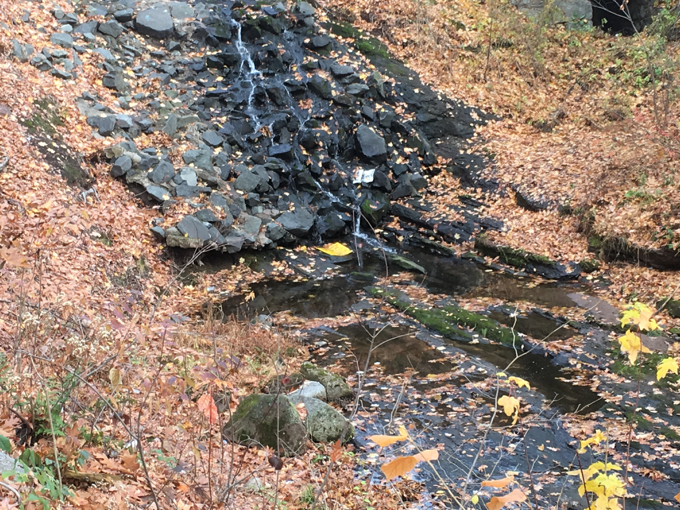 But look closer: the falls are true falls, tumbling down black rocks and into a stream below.

I brought Calvin here after checking out two much more waterfally waterfalls in town – Wyllys and Case Falls. He was thoroughly unimpressed with this one, but then again, I can’t expect a five-year-old boy to fully grasp the historic import of this place. 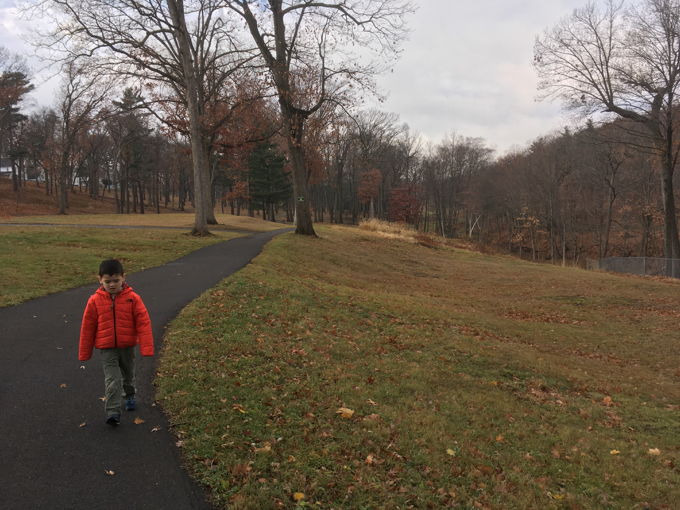 Center Springs Park is an urban oasis, with a disc golf course, a nice pavilion, and grassy knolls upon which one can take in the dammed lake. I lived in Manchester for a few years and never knew this park existed. 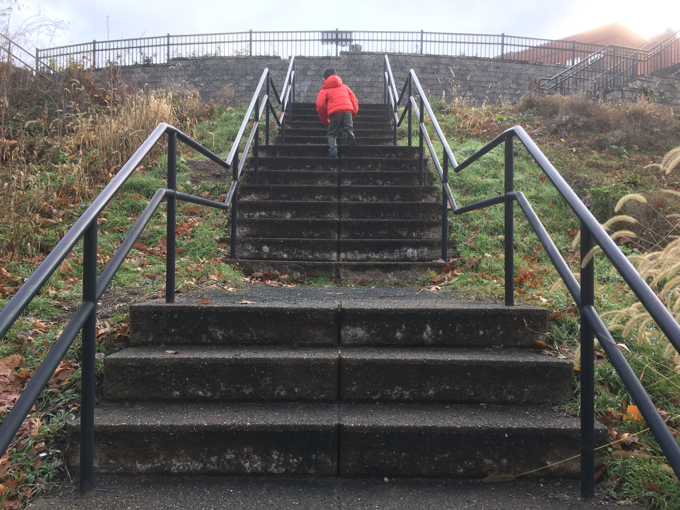 We parked and made our way down the handsome staircase into the park. The paved trail took us around the top of the falls, past a butterfly garden, and over to the other side with better views of the falls. 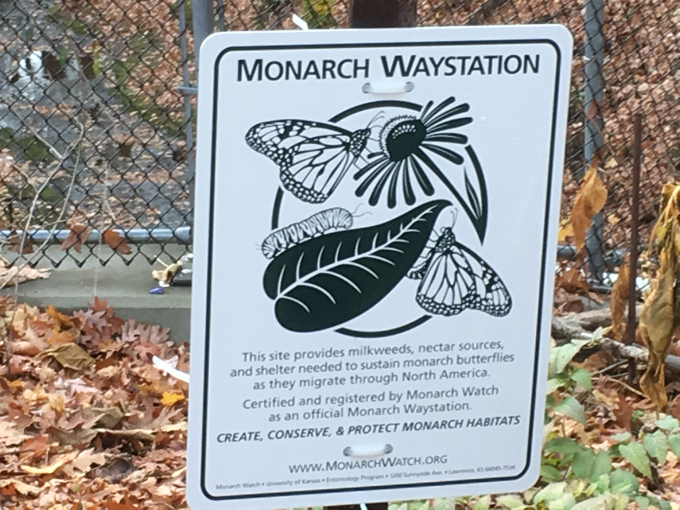 Yeah, they look pretty lame in 2016. But back in the day, this park was far more wild than urban and Bigelow Brook and the gorge it has forged were a very popular place for weddings and sightseeing and such. And way back in the day, Center Springs Falls was a gathering place for Native Americans to catch fish and hangout. 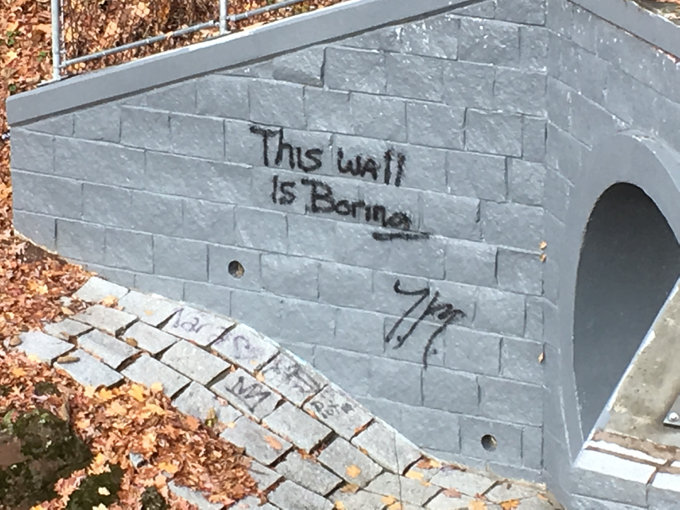 The graffiti I’ve been talking about

“…The great trail [now Center Street] passed the second-best fishing place of the Podunks, the falls at Center Springs Park. Here the Indians caught the lamprey eels, and…divided and dressed them under an oak tree. The oak tree stood about where the Center Church now stands…” 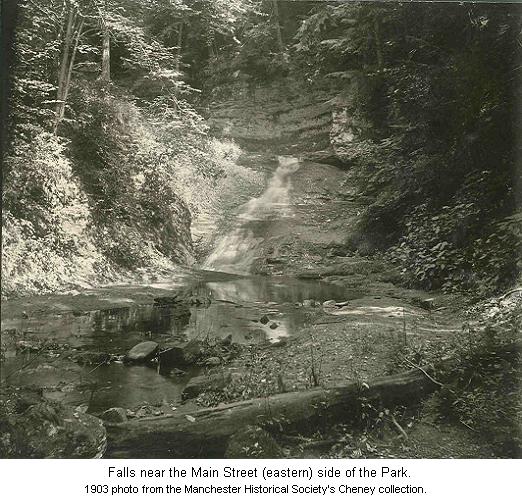 1903 photo from the Manchester Historical Society

”… the heyday of the Park was during the 1930s and 1940s. ‘Back then, a full-time person worked just at Center Springs Park, supported by other Park Department maintenance staff.’ This worker maintained the water garden, the remains of which can still be seen along the brook, as well as the trails in the park and the skating lodge.” 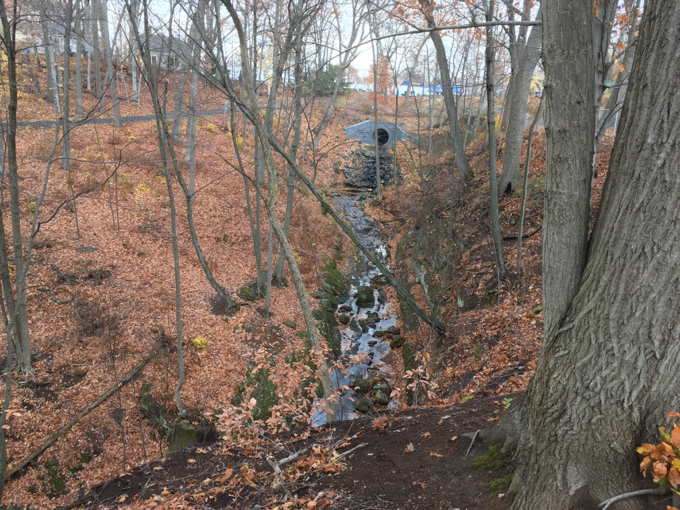 Manchester restored the park after it became polluted and blighted in the 60’s and 70’s. They’ve done a great job of it (can’t stay on top of every bit of existential graffiti) and I was sort of upset with myself that I’d never visited before.

The falls are not the grandest, and the park isn’t the fanciest, but both are pretty cool in the context of downtown Manchester. 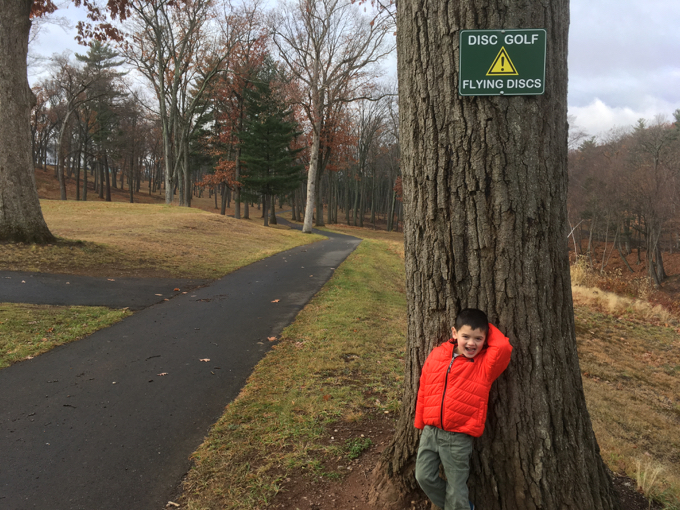 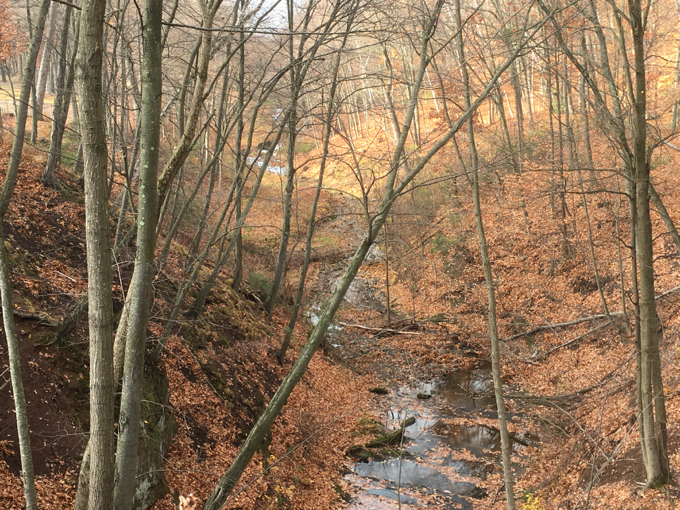