I view this page two ways. One, it’s ridiculous. I can’t be driving around the state every June taking drive-by pictures of every house with nice landscaping. C’mon now.

Or… it’s awesome. Surely I’m highlighting the immense labor and cost put into this place on West Avon Road because there simply can’t be too many other private homes with gardens like this place. Moreover, Ms. D’Esopo has raised hundreds of thousands of dollars for charity through tours of her property. So here we are. 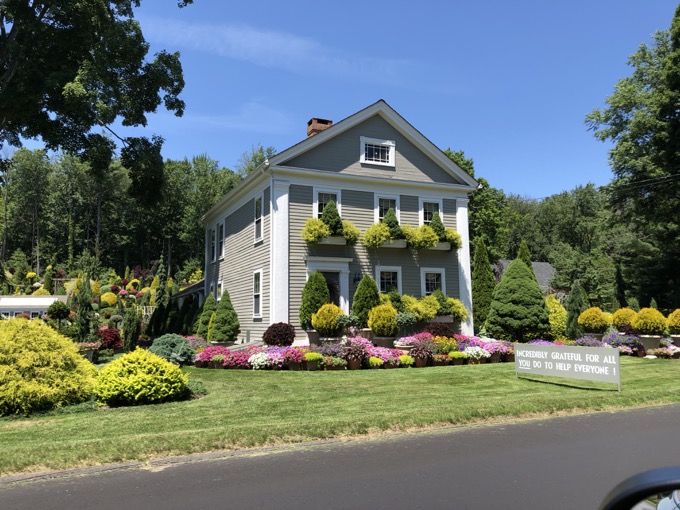 And the house is beautiful. Just stunning. In fact, when I went over there to take my pictures, someone else had pulled off to the side of the road to gawk. (West Avon Road is a fairly busy road and I can’t decide if it’s good that more people see it as a result, or bad because it affects traffic flow.)

It’s near the intersection with Arch Road. Not picturing it? How about… it’s kitty corner to The Church of Satan – errr, Saint Anne.

Now that everyone knows where it is, let’s talk about what it is. Ms. D’Esopo is some sort of interior designer from August to April or something, and then works 12 hours a day in her yard. She’s been doing it for almost 30 years now. 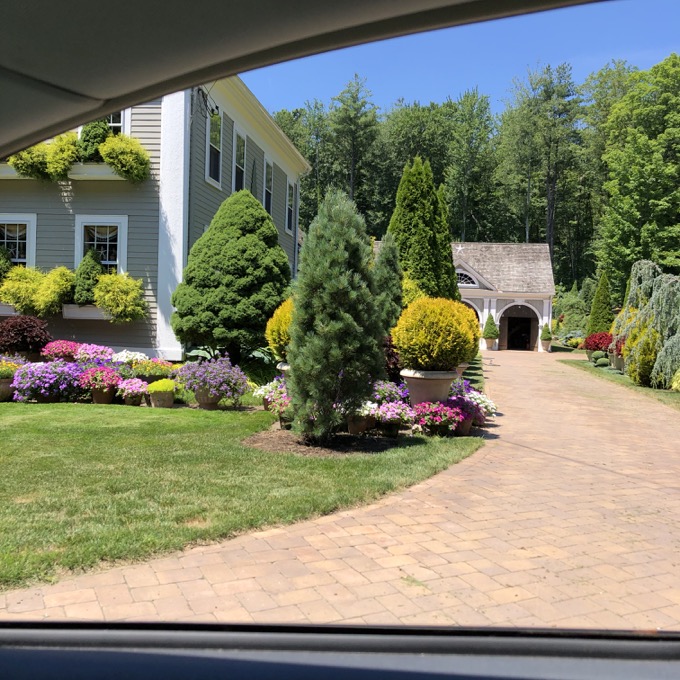 For years she opened her grounds up to the community for tours; charging guests and donating a healthy chunk to various charities that were chosen each year. All was well and it was all pretty much an Avon and nearby towns thing. Then in 2012, everything changed.

And I hate this story so much. A guest – a local Avon resident! – were touring the gardens when she turned her ankle on a brick walkway. The woman filed an insurance claim against D’Esopo and the two nonprofits benefiting from that day’s tour. The Hartford Courant said at the time:

Despite the insurance companies’ willingness to cover all the medical expenses for the woman, her husband, who wasn’t on the tour, has threatened to sue for his own “pain and suffering” linked to his wife’s hurt ankle, D’Esopo said.

Stop. Think about this scenario. Awful, right? Now let’s learn a bit more about all the good that D’Esopo has done…

“This is a sad day for people who love flowers and for a person who wants to volunteer their time,” says Diane Paige’Blondet, executive director of My Sister’s Place, a Hartford shelter for women and children that has benefited from fundraisers at D’Esopo’s home. 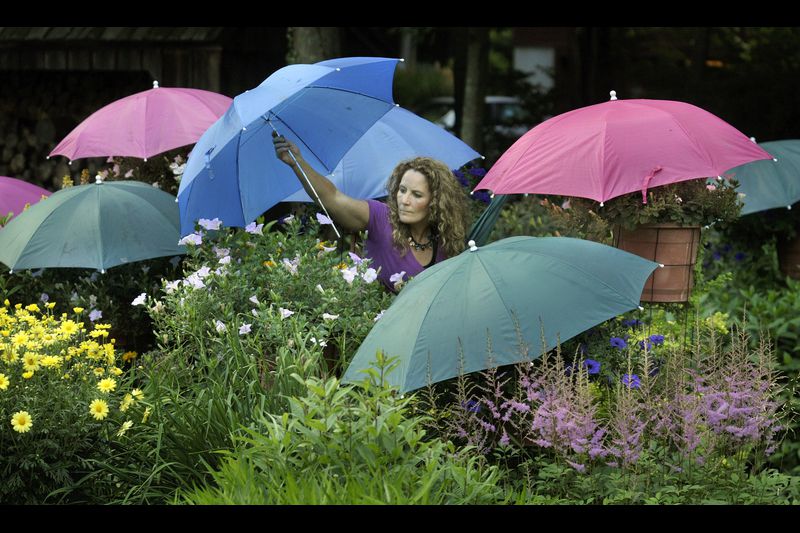 Chrissie D’Esopo (Picture from The Courant)

Besides giving garden tours, D’Esopo has cooked gourmet dinners for strangers; allowed four couples to hold their wedding ceremonies in her yard; and welcomed countless bridal parties, prom-goers and high school seniors who posed for pictures amid the petunias. Convalescent homes brought residents to tour; plein air painting groups set up easels; a camera club shot photos. Strangers routinely pull into her driveway and walk around the yard.

“Chrissie’s funding became part of our budget; she was so dependable,” said Paige’Blondet, noting that the money raised was used for necessities like diapers and to pay part of a youth coordinator’s salary. “I’m sickened by the fact that people will not benefit.”

Gifts of Love, an Avon-based nonprofit that serves basic human needs, received $7,500 through two dinner parties at Chrissie and John D’Esopo’s home last winter, where people paid $100 per plate. The D’Esopos cover the cost of the food, so 100 percent goes to charity.

“People really want to go in” their house, said Diana Goode, executive director of Gifts of Love. “To go inside is just amazing.” (D’Esopo, an artist, has adorned interior cabinets with starfish and shells and walls with antique tools.)

“She’s just unbelievable about opening her home to people,” Goode said. “To see this happen to her is just awful.”

That was all in 2012. Even though Connecticut has a recreational immunity statute that covers private property owners who open their land to the public for tours as long as the owners do not profit, D’Esopo ended her large-scale tours for seven years. Because a woman twisted her ankle and that made her husband sad. 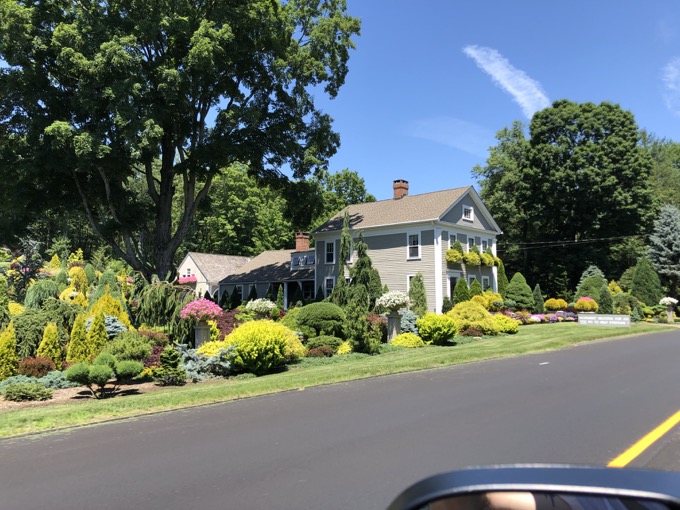 D’Esopo kept gardening and planting and tilling and mulching though. She just couldn’t stop. She’s been featured in “Better Homes & Gardens”, “Fine Gardening”, and “Country Living.” Finally, in 2019, she opened her property up for tours again and one of the nonprofits she donated to was “Save Nod Road” which, if you don’t live in Avon you don’t care, but it was the rare effort that staved off new housing development.

So now the golf course on Nod Road doesn’t have giant houses next to it. Yay! Anyway, it’s awesome that the gardens are open again and you can go and – oh. The Pandemic hit and there were no tours again in 2020. Sigh.

Check this out. Imagine being the neighbors? 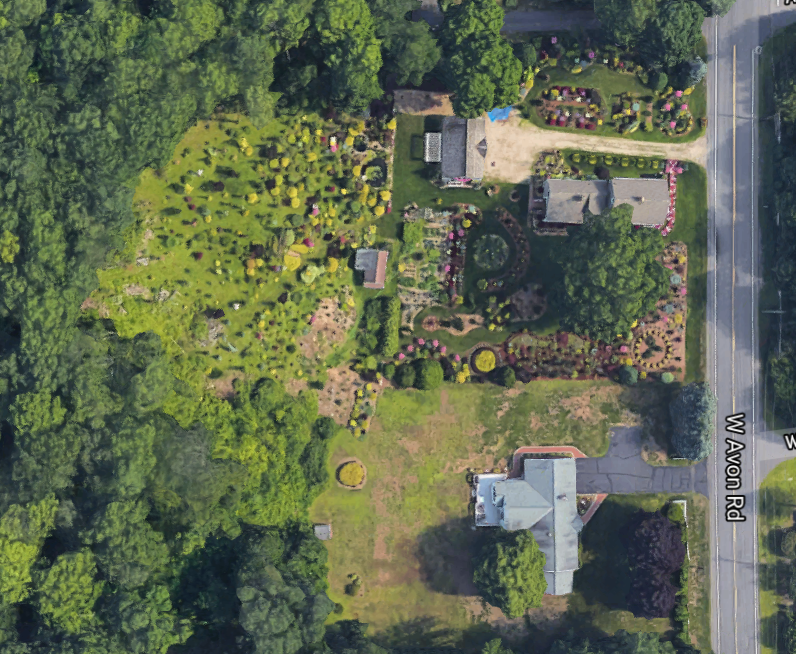 Cracked up driveway, brown patches in the yard… that would totally be me. Maybe they spend their time helping out next door? It wouldn’t matter who lived there; their yard would look terrible in that setting no matter what. I want to talk to those people as much as I want to talk to Chrissie D’Esopo.

I only know of this place and its caretaker through a few articles. Clearly the gardens are awesome, and I can’t imagine the owner is anything but awesome. Keep an eye out for future tours and for the love of all that is holy at The Church of Satan – errr, Saint Ann – be appreciative of it and don’t sue them. Grrr.