The Tour de France is massive. It’s the Super Bowl on wheels for three weeks across 2,000 miles. It’s insane. Planning to see some stages, notably mountaintop finish stages, requires a lot of planning, a lot of effort and a even more patience. About 8 months before the Tour’s route is announced, strong rumors swirl about the gist of the route. This comes from moles in the know who are privy to huge upticks in traditional tour town hotel reservations and other such clues.

Using that, for potential Tour days I selected a couple hotels and the moment the route was announced, I tried to get reservations. I scored every one I tried – though I wasn’t exactly staying in the finish towns, but close enough. For this day, the finish was on the Col de Tourmalet, one of cycling’s most famous climbs in all the world.

We stayed in Cauterets, maybe 30 miles from the finishing resort of La Mongie. We’d been told that the road over the mountain would be closed 24 hours in advance of the Tour, but whatever, we’d go see how far up we could get. We awoke around 5AM, drove up and over the Tourmalet with no one stopping us. At the top, I met Levi Leipheimer’s brother (see below) and we just absorbed the Pyreneen beauty. It’s ridiculous.

I was able to drive down to about 3/4 of a mile above the finish line and then we walked into town. Even at 8 AM, it was mad. Mad with drinking, partying and crowds. For the next 8 hours, we pretty much waited for the riders after staking out a primo spot on the fence at about 100 meters to go. At one point, we sat through a massive hailing downpour with temps dropping into the upper 40’s. Ahhh, it was fun.

Alas, about 20 minutes before the riders arrived, a bunch of crazy Basque fans muscled their way in and pushed Hoang all about. I almost started punching some idiot, but cooler heads prevailed. I think Ivan Basso won the day and then we fast-walked back up the mountain to our car and slotted in behind the US Postal Service bus. Let me tell you, I thought I was a good and fast driver? This guy was flying down these skinny mountain roads at maybe 65 mph. It was the thrill of a lifetime to stay on his tail. 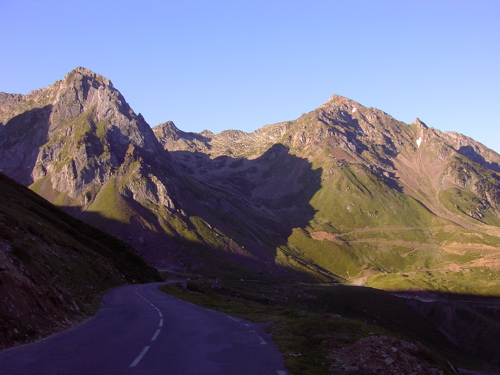 This is the backside of the Tourmalet that we drove up 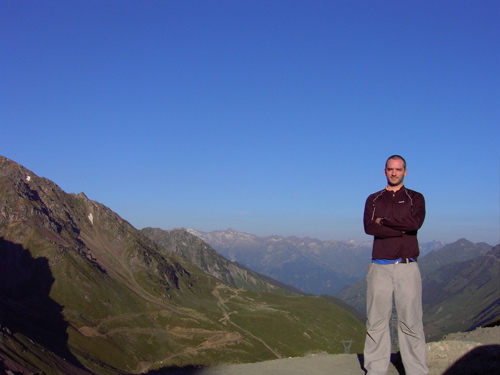 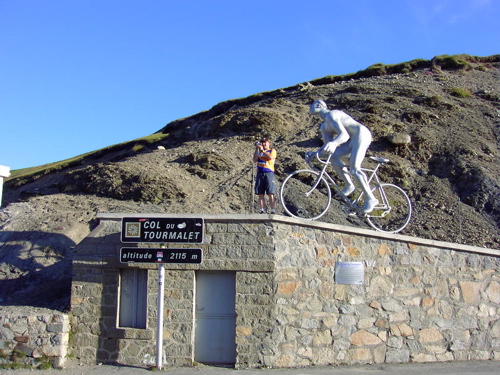 That’s Leipheimer’s brother from Montana up there. Seriously. We talked for a while. 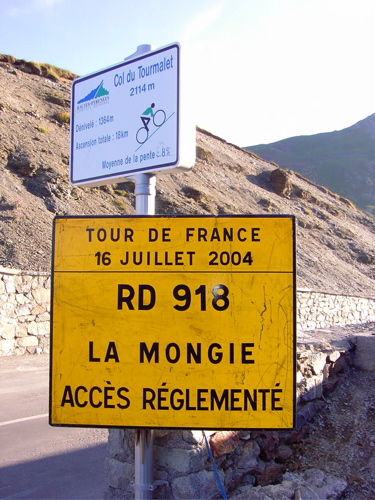 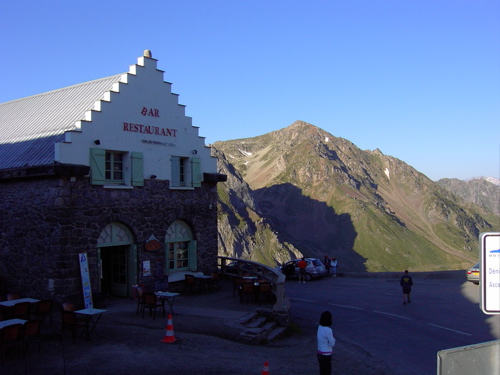 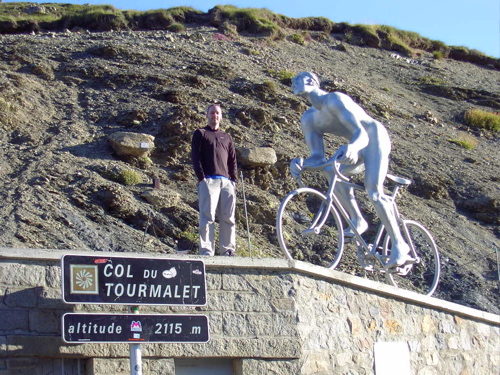 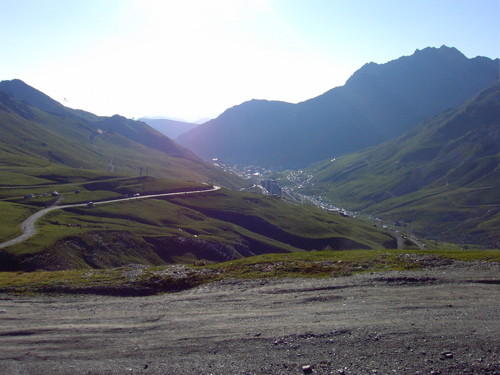 After cresting the Tourmalet, this was the view down towards the finish 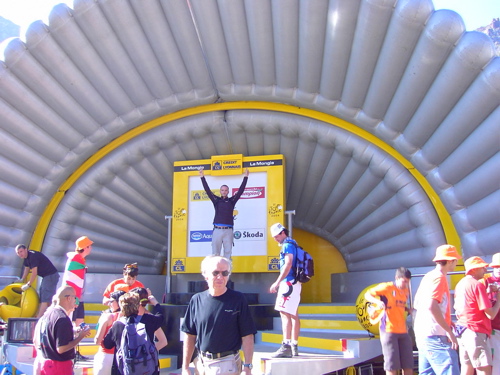 There I am, on the official winners podium on the Tourmalet… 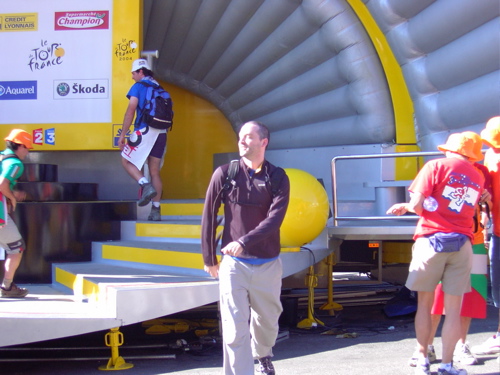 Thrill of a lifetime! 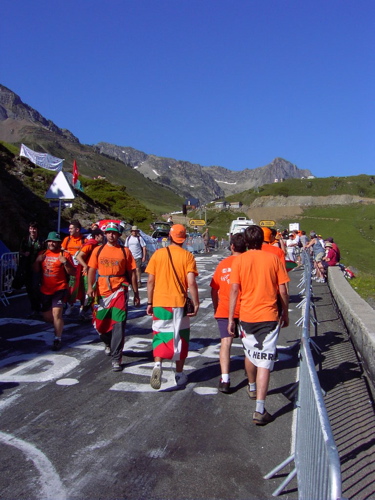 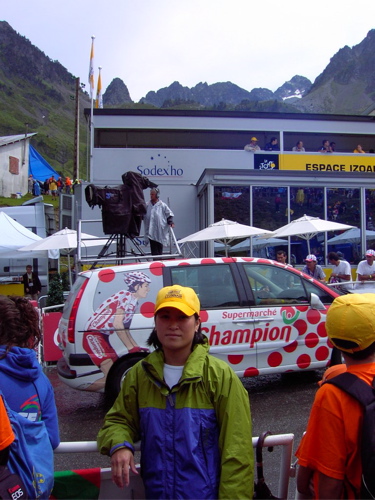 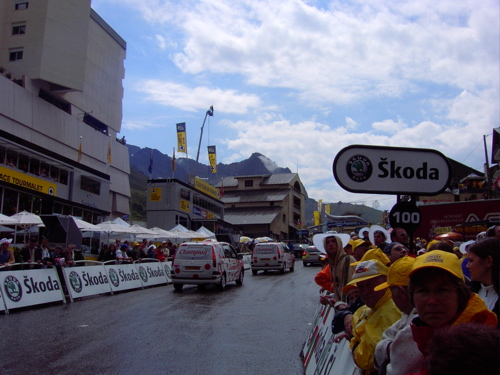 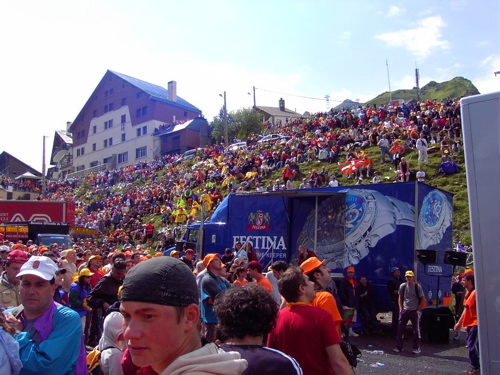 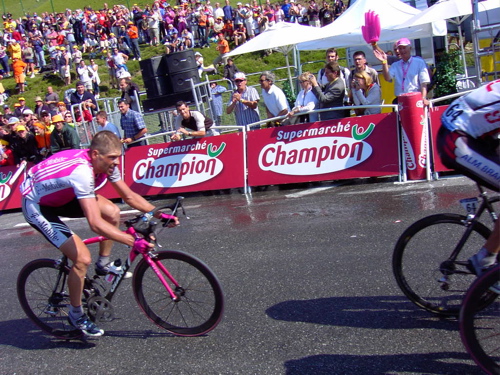 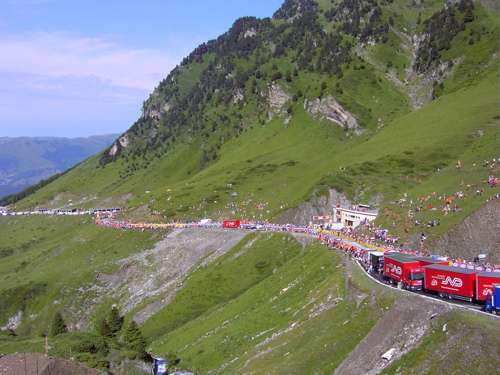 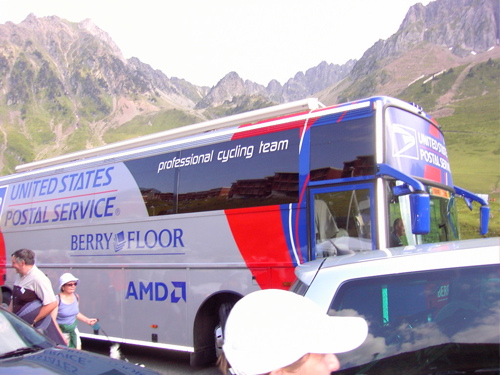