While tooling down Route 165 into Preston City, Hoang noted how cute this painted rock was. Hoang likes dogs. Her family Chihuahua had just died a couple days ago. Don’t feel too badly; BeauBeau was N-I-N-E-T-E-E-N years old and quite frankly, looked a fright. And his name really was BeauBeau and it really was apparently spelled like that. 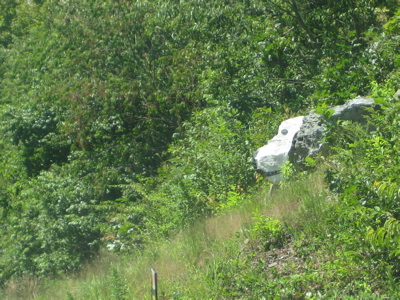 After a stop at a winery and some lunch, we passed the dog rock again and I took a picture. I can’t imagine you’ll ever have any reason to be on Route 165 in Preston, but this dog has lasted way longer than BeauBeau:

There’s a plaque near it that says: “Stanley Zictorac original painter of Spotty May 1935.”