Another cold and dreary spring weekend here in Connecticut with a bored special needs five-year-old, who NEEDS to get out and about or we ALL go crazy. What to do, what to do… Oh I know, we’ll go see some doggies! Damian loves dogs! 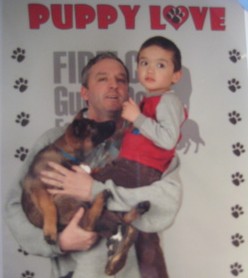 And, truth be told, I figured this would be a great way to work in a CTMQ page about one of the most interesting men in Connecticut history: Chalres H. Kaman. He had just recently died in January 2011, and this is really the only way I could pay homage to the man. And if you’re familiar with the Dos Equis “Most Interesting Man in the World,” I think you’ll find Kaman worthy of the distinction.

Plus, he probably drank better beer than Dos Equis.

The main Kaman campus in Bloomfield proves my point. Here, Kaman engineered helicopter parts are tested, Kaman’s Ovation Guitars are headquartered and the Fidelco Guide Dogs are raised and trained at their headquarters. Sorta crazy. Especially when one note all three are the top of their class. 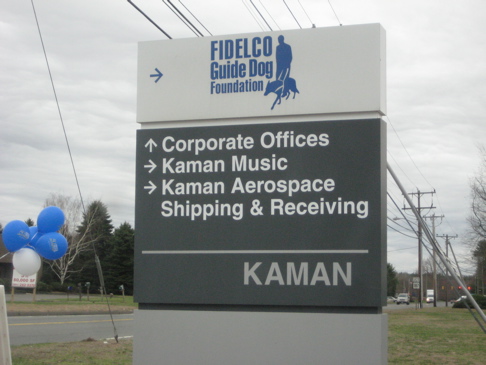 How could one guy excel and produce in three such divergent areas? Who knows, but the world is much richer for Mr. Kaman’s contributions. Let’s start with the Fidelco Guide Dogs. Charles (and his wife Robbie) Kaman’s intuitive knowledge of how German shepherd dogs could help people who are legally blind live more normal lives was the genesis of the Fidelco Guide Dog Foundation. 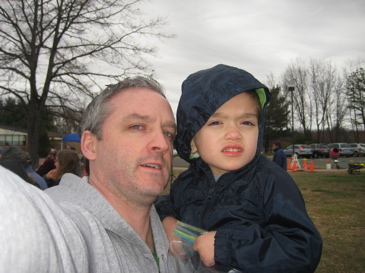 The Fidelco German shepherd was created from Bavarian stock. It is an outstanding and exclusive product of selective breeding from strong working lines and has evolved to be truly a breed within a breed. Our dogs possess the characteristics of the ideal working guide; intelligence, temperament, stamina and stability. 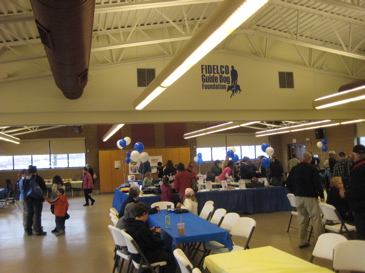 They are responsible for our clients’ safety at all times. This formidable task requires us to have an uncompromising focus on the quality of the breed, which is a hallmark of the Fidelco shepherd.

Beginning in 1960, the work done by this innovative couple and ever-growing group of dedicated and tireless staff, volunteers and supporters have reached out and touched thousands of clients’ and family members’ lives. Today, Fidelco is an internationally-recognized leader in the guide dog industry. I was surprised when I asked my parents if they’d ever heard of Fidelco and they both said no. I guess they don’t know any blind people or something. Because even though Fidelco is headquartered in the town next to where I live, I think I’d heard of them many years before I moved to West Hartford. Since 1981, Fidelco has placed 1,300 guide dogs in 35 states and four Canadian provinces – for blind people and to police departments. 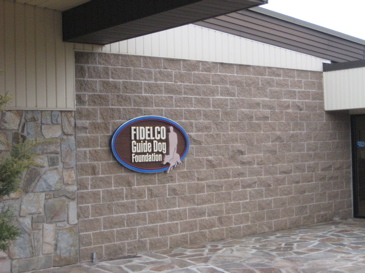 The Open House event is a (I think) once per year thing when Fidelco opens up their doors to allow the community in to learn a bit about the groundbreaking program. There were tours offered, which I tried to attend, but Damian had other plans. So we went back into the main exhibit area and learned about all the organizations who benefit from these amazing dogs. Fidelco breeds, trains and places German shepherd guide dogs with individuals who are visually impaired. Fidelco exclusively uses In-community Placement whereby individuals are trained one-on-one in their hometown. Damian and I had our picture taken (for a small donation) with a German shepherd puppy. 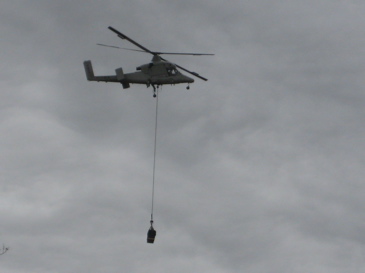 Then we went outside to watch the West Hartford police K-9 unit get attacked by a their police dog – which was all very exciting, but it was cold and windy and in Damian-world, the hovering helicopter across the way was somehow more interesting than a dog eating a guy’s arm off. So we moved along and watched the helicopter carry some giant sled of boxes for a while. 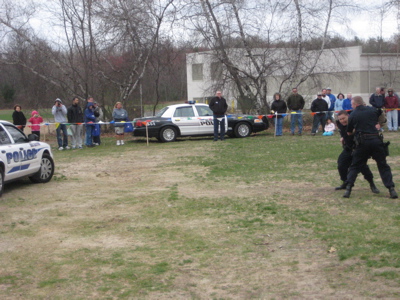 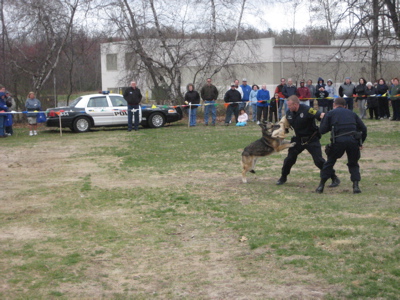 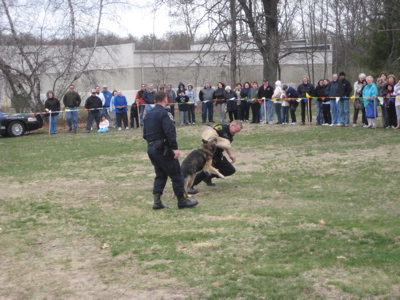 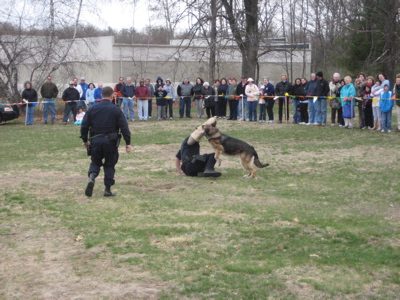 Kaman was one of a small group of mid-20th-century inventors, including Igor Sikorsky and H. Joseph Gerber, who shaped Connecticut industry through a combination of technological advancements and business acumen. Among Kaman’s numerous awards was the National Aeronautic Association’s Wright Brothers Memorial Trophy, the nation’s most prestigious aviation award. In 1996, three years before Kaman retired, President Bill Clinton awarded him the National Medal of Technology.

I told you, the guy was pretty amazing. Let’s learn a little more about the man from the New York Times obituary by a Motoko Rich:

Mr. Kaman was a 26-year-old aeronautical engineer when he founded the Kaman Aircraft Company in 1945 in the garage of his mother’s home in West Hartford, Conn. By the time he retired as chairman in 2001, he had built the Kaman Corporation into a billion-dollar concern that distributes motors, pumps, bearings and other products as well as making helicopters and their parts.

Within the aerospace industry, Mr. Kaman is best known for inventing dual intermeshing helicopter rotors, which move in opposite directions, and for introducing the gas turbine jet engine to helicopters. The company’s HH-43 Huskie was a workhorse in rescue missions in the Vietnam War.

Mr. Kaman, a guitar enthusiast, also invented the Ovation guitar, effectively reversing the vibration-reducing technology of helicopters to create a generously vibrating instrument that incorporated aerospace materials into its rounded back. In the mid-1960s he created Ovation Instruments, a division of his company, to manufacture it. 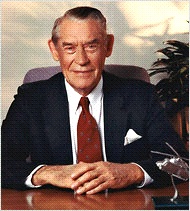 The Ovation allows musicians to amplify their sound without generating the feedback that often comes from using microphones. It was popularized in the late 1960s by the pop and country star Glen Campbell, who played it on his television show, “The Glen Campbell Good Time Hour,” and who appeared in advertisements for the company. A long roster of rock and folk music guitarists began using it as well.

Born on June 15, 1919, in Washington, Charles Huron Kaman was the only child of Charles William Kaman and Mabel Davis Kaman. As a teenager, he loved building model airplanes from balsa wood and tissue paper and flying them in indoor competitions. He had once hoped to be a professional pilot but abandoned that ambition because he was deaf in his right ear.

He received his bachelor’s degree in aeronautical engineering from the Catholic University of America in 1940. After graduating, he went to work at Hamilton Standard Propeller Corporation, a unit of United Aircraft. He soon met Igor Sikorsky, another pioneer in helicopter design, who ran United’s helicopter division and who inspired Mr. Kaman to begin developing his own parts.

One of his first inventions was the “servo-flap,” which could be added to the edges of a rotor blade to help stabilize a helicopter. But one of his greatest contributions was to introduce jet engines to helicopters.

“It gave them more power,” said Walter J. Boyne, chairman of the National Aeronautic Association and the author of numerous books on aviation. “Helicopters really moved into their own.” 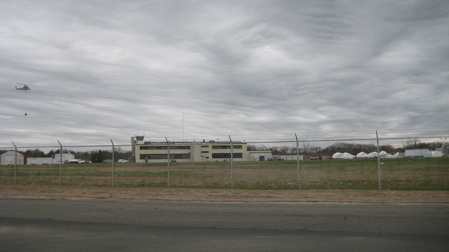 Terry Fogarty, who worked closely with Mr. Kaman for nearly a decade developing the K-MAX “aerial truck,” said Mr. Kaman, who developed the first remote-control helicopter in 1957, envisioned an unmanned cargo helicopter that would take over the “dull, dirty and dangerous missions.”

The company is developing such a helicopter, based on the K-MAX, and has a contract to deploy it to the Marine Corps for use in Afghanistan.

Seriously, you’d be hard-pressed to find a more impressive guy from 20th century Connecticut. I’ll let his eldest son sum it up, from the NYT piece: “It came down to the helicopters, guitars and dogs.” Which now that I knew more about Kaman, actually sounds kind of normal. 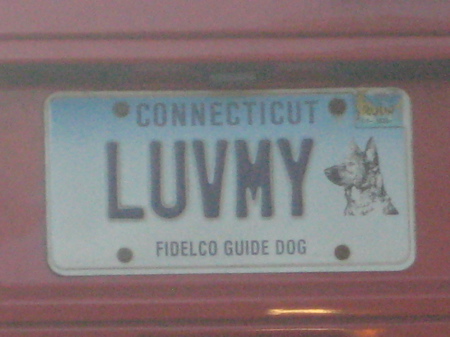 Saw this on Mountain Road in West Hartford. Nice. But wait, does that mean the driver is blind?