My employer’s annual work outing occurs in late June at the Farmington Club. It doesn’t really get going until 10 AM, so after dropping off my son, I had some time to kill before sitting around and actively avoiding team-building exercises and such. 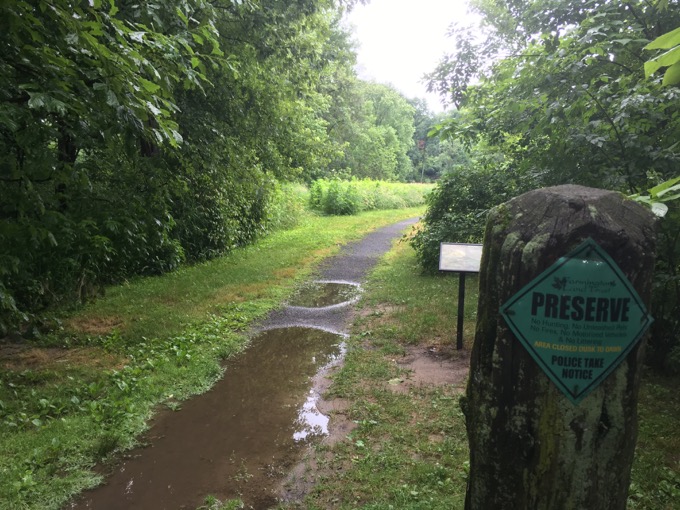 Sure, it was pouring as I drove to the trailhead, but hiking in a downpour is always preferable to Life Insurance Trivia.

The Nancy Conklin Trail is located on the Farmington Land Trust’s Cowles Parcel. Remarkably, as I pulled into the little lot off of Meadow Road, the rain abated. Praise be.

And if I had had more time, I’d have extended my hike and taken in the town’s Farmington Flats Loop Trail which is essentially an extension of the same trail. But that will have to wait for another day. Hopefully sooner than next year’s work outing. 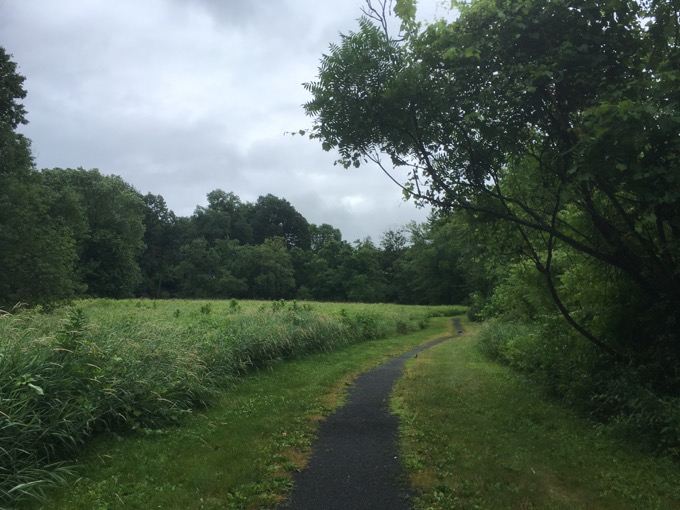 Actually, looking a bit more closely, at 3.4 acres, the land trust’s Cowles parcel is quite small, and this little hike actually did take me to town-owned land. This is all very important stuff. 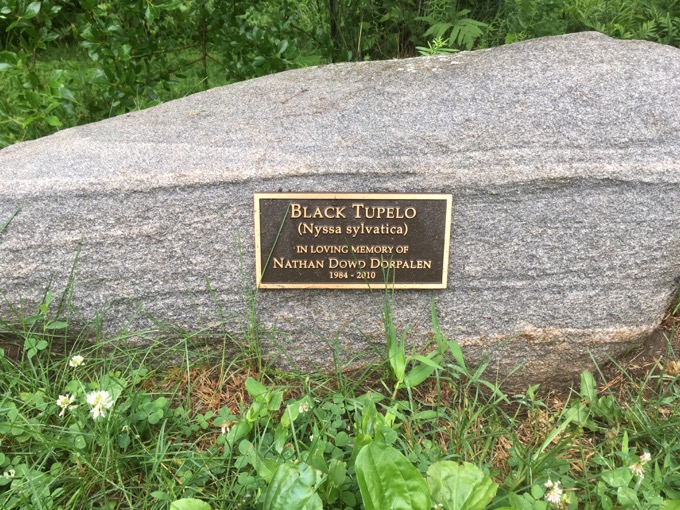 And that pretty much sums it all up. But I know you… you expect more. So here’s more.

I have done you the service of providing pictures of those “best summer views.” It’s a cornfield. And it has successfully made it to “knee-high by July.” Congratulations, corn. 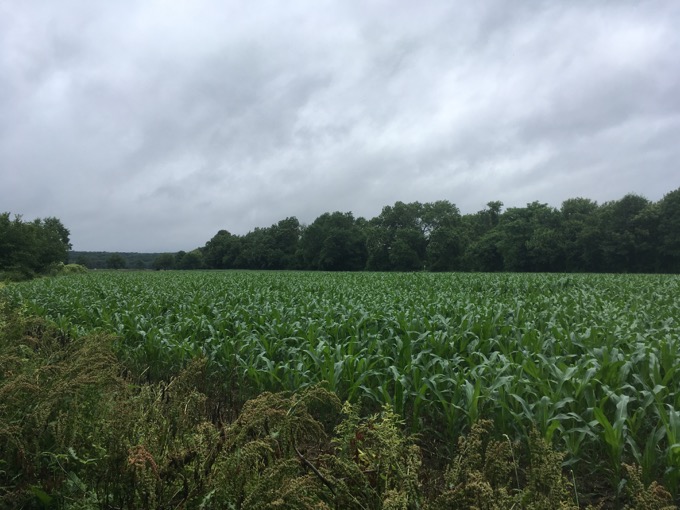 Depite the soggy mess of a trail, I made quick work of it. The confluence of the rivers was really something. (Not really.) Hey, did you know that Farmington was named Farmington because it was a farming town? And that the best farming in Farmington is here, in the Farmington flats?

For centuries, Farmington people drove their cows down to the river and into the fields for pasturage – either bringing them back at evening for milking or keeping them in “summer quarters” for the season. One could cross by bridge, or ford the river near the gristmill to reach Indian Neck; or cross the old stone bridge over the Pequabuck to reach fields south of the river.

The land was the gift of Mr. and Mrs. Sheffield Cowles. They purchased it from the Root family, who were evidently successors to colonial-era Cowleses. It adjoins land originally granted to Farmington’s first minister Roger Newton and later passed down through Hooker and Cowles families. The small home of one of Farmington’s early Italian [Lenolese] immigrants stands adjacent to the ancient bed of the Farmington Canal a few yards to the east. 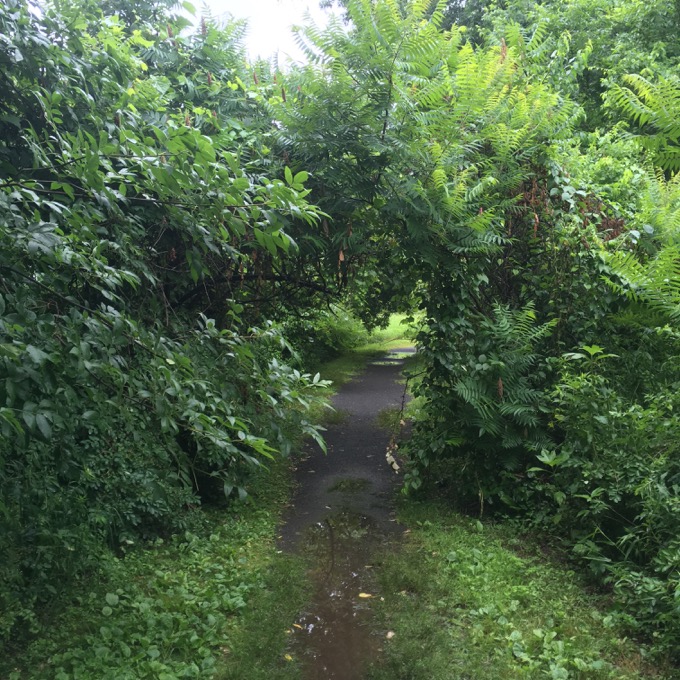 Bored? Don’t be… because this page is about to BLOW. YOUR. MIND.

The Pequabuck River wraps around the northern boundary beneath the ample Georgian mansion of playwright Winchell Smith. The setting thus reflects many aspects of our history: early settlement, immigration, industry, dairying, our literary past, and 365 years of farming. It was probably also a campsite of Compte de Rochambeau and his troops on their way through to or from Yorktown in 1781/82. The field will be kept open by twice-a-year cuttings, avoiding nesting times of resident birds. The parcel positively reeks of history – one has only to amble along the Conklin Nature Trail look around and breathe the air!

The air during my hike was grossly humid and thick. So let’s forget about that and go back to the Winchell Smith thing. 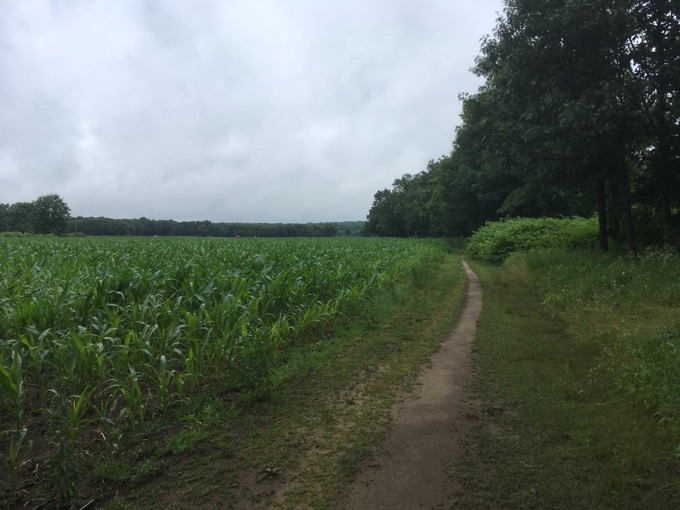 Winchell Smith was an American playwright, known for big hit works such as Brewster’s Millions and Lightnin’. Many of his plays were made into movies. He spent freely but left a large fortune at his death.

Smith was born in Hartford, Connecticut in 1871 and was the nephew of William Gillette of Gillette Castle fame. He was an actor too, but then moved on to be a playwright. He adapted Brewster’s Million’s to the stage in the face of many naysayers. As of today, that play has been made into TWELVE films, including the 1985 Richard Pryor version you probably know. 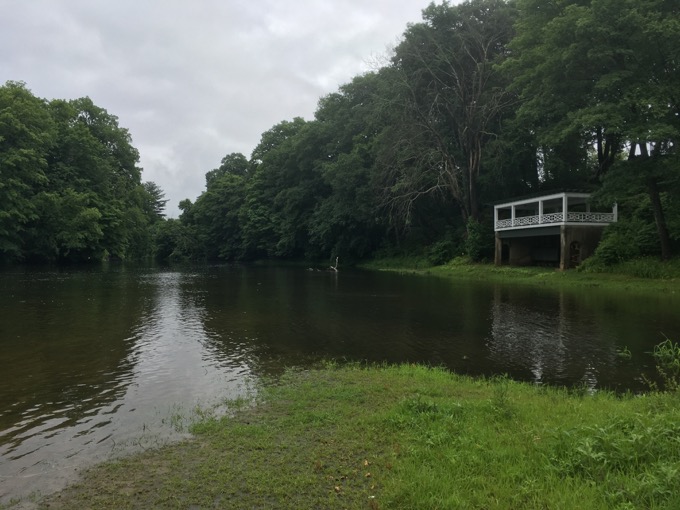 I noticed the estate across the river, but there was no opportunity to get a good picture of anything other than a sort of deck thing overlooking the confluence of the rivers. Smith is buried in Farmington at Riverside Cemetery near Foone. And while his plays are his most well-known legacy, Smith also left behind a lasting tribute: the Winchell Smith Fund, which among other things, provides funds for a New York City social club’s members unable to pay their dues or bar bill. 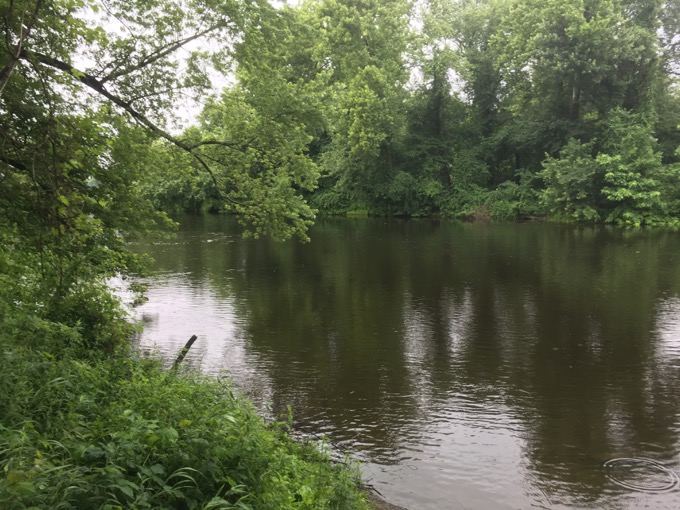 All hail Winchell Smith. And the Cowleses. And Nancy Conklin of course. 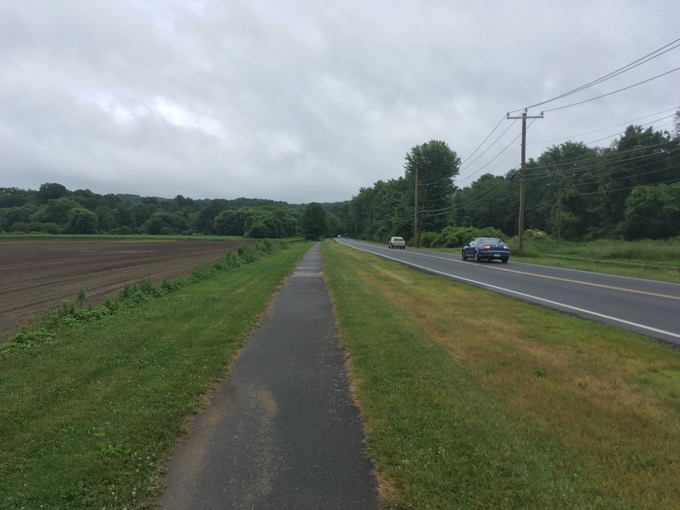