Having Your Cake (House) and Saying Eat It Too
Gaylordsville Section of New Milford
November 12, 2011

2018 Update: See comments below – October 2018 I just was given a tour of the house that is being renovated by a local mason worker who now owns it. What a fabulous house, He installed high end new windows and I would live there in a heart beat, he best looking dwelling in the neighborhood!

Some things in Connecticut are deservedly world-renowned. The Twain House, high taxes, CTMQ and our fall foliage to name a few. Some other things are world-renowned that you most likely don’t even know about – even if you live in the state. One of these things is, of course, the Gaylordsville Spite House (aka the “Cake House”). 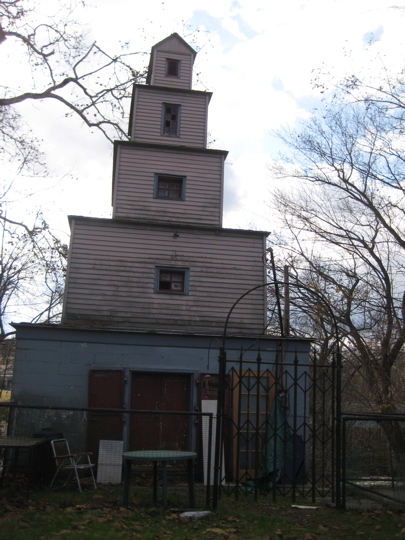 Since this is one our state’s two spite houses (I’ve visited the other one in Mystic as well), allow me a minute to explain such a rare thing. Turning to Wikipedia, “A spite house is a building constructed or modified to irritate neighbors or other parties with land stakes. Spite houses often serve as obstructions, blocking out light or access to neighboring buildings, or as flamboyant symbols of defiance. Because long-term occupation is at best a secondary consideration, spite houses frequently sport strange and impractical structures.”

Excellent. Here’s a nice pictorial of 8 Spite Houses around the country. Most of them – and most spite houses in general – involve either unliked neighbors or perceived unfair town ordinances. Our Gaylordsville Spite House has a somewhat different, rather unique story – one which, as you might expect, contains some iffy details.

First, the facts: I knew about the house but when I spent a night and a day camping and hiking along the Appalachian Trail from Sherman to Kent, I didn’t have it on my ancillary itinerary. But midway through my yo-yo solo hike, I was moving my car up the trail along route 7 and saw it just east of the road. My brain quickly realized what I was looking at and I turned off the major road to get a closer look.

According to accounts, a Warsaw expatriate named Jan Pol (born in 1894) built it as a “monument to injustice.” He had adopted an unwanted baby girl somewhat unofficially (those were the times) and despite loving her, giving her a good life and family, the state came and took her away because the proper paperwork hadn’t been done. So, out of rage, he built what was considered an eyesore in the bucolic New England countryside. Pol even had a plaque installed on the house to remind people that she was – as the plaque said, “kidnapped away from freedom to the godlessness of Hitlerism.”

These days, it’s not occupied, but from time to time (usually on a Saturday morning in the spring) some guy named Johnny Flynn sells some of his antiques and things in the ground-floor room. During my visit, the grounds around the building looked a bit of a mess.

Now, on to the “iffy” parts of the story. The adopted girl was said to be “disreputable” (and perhaps not a baby at all). This girl, Pol’s adopted daughter, got pregnant while still a minor and had a baby girl. This brought the situation to the state’s attention who swooped in and took both girls away from Pol. Connecting the dots, it was assumed that the baby was Pol’s. I have no idea if he denied this or if any legal action was ever executed.

I do know the baby’s name was Catherine. I do not know if the rumor that “her cradle resides in the top-most tier to this very day” is true. And of course it’s indisputable that Pol built this mess and that it has somehow withstood the test of time.

To me, the “house” really isn’t so awful. Route 7 have been built up through New Milford and while the drive north is one of the best in Connecticut, it has its share of crap already. At least this crap is more interesting than the more recent crap. 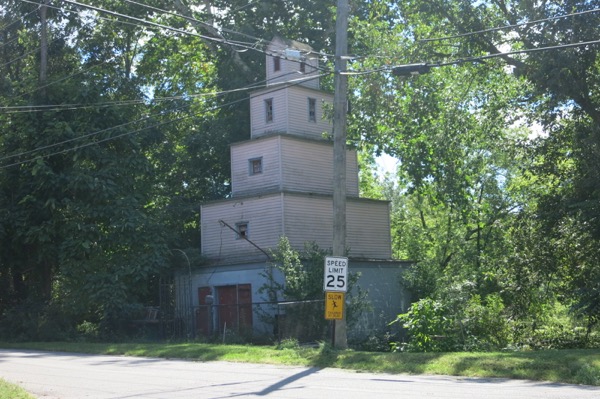