CTMQ > Everything Else > Geography > Geographic Center of Hartford

I promise this will be the only “geographic center of” any of Connecticut’s 169 towns. I had to do one since it’s been impossible getting good data on the geographical center of the state so far. (I’m getting warmer though.) And also because Hartford – or rather the Aetna insurance company – does a cool job of marking the spot. 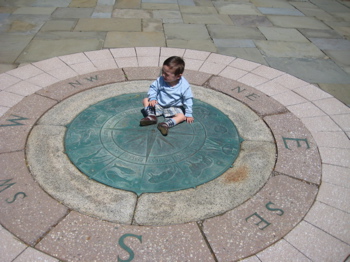 As is tradition for most families I suspect, this Mother’s Day took us to this important spot in downtown Hartford. While we didn’t see any other families celebrating motherhood at the cool inlaid display on the steps up to the massive brick building, I figured we were just early, that’s all.

The spot is denoted with a large brass directional compass embedded into the stone. This center of the compass marks the exact geographic center of the city of Hartford.

Cool, right? There’s more! In poking around the Aetna site, I came across this – mere feet from the center: 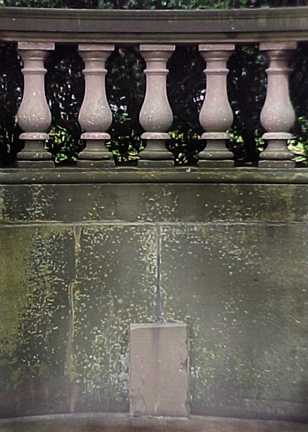 What’s that? Two centuries ago, Farmington Avenue was an unpaved road leading west over Avon Mountain and into the wilds of the Farmington Valley and beyond. The distance traveled was marked in miles by stone pillars, one of which is embedded in the brownstone wall on the west side of the esplanade. Over the years, the markings on this pillar have become faint, but the inscription reads “H 1m.” — the distance from the Old State House to this point is exactly one mile.

Furthermore, the Aetna building is also the World’s Largest colonial building! which is pretty incredible.