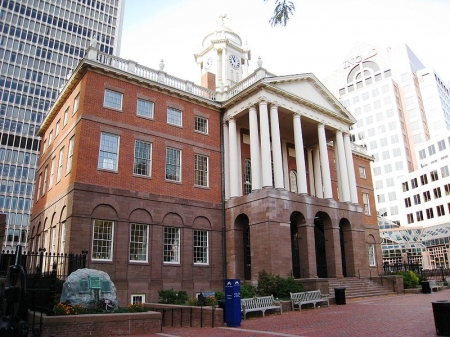 I would guess confidently that the other 49 states in our Union all have a state history museum in their capital cities. I would also confidently guess they explain the birth of their state, the history of their governance, as well as other important items about that state. Connecticut’s Old State House in Hartford certainly has all of that. But it also has a two-headed calf and a two-headed fetal pig. And I darn well know that none of the other 49 states have that in their state history museums. So let’s give it up for Connecticut. Seriously. 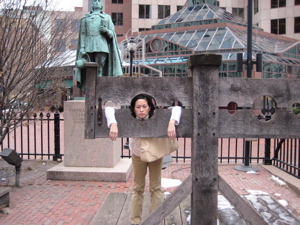 For example, Arkansas’ Old State House museum has a permanent collection of quilts and Arkansas pottery. We have a massive alligator and a monkey paw.

We went on (yet another) dreary Saturday this winter and were initially shocked by the admission – I think it was $6 each. (I’m just used to free museums.) The State House is more like three distinct museums in one: A “History of Connecticut” museum, a “Boring old Legislative Stuff” museum, and the Museum of Curiosities. We began below ground level and raced through a history of Connecticut. 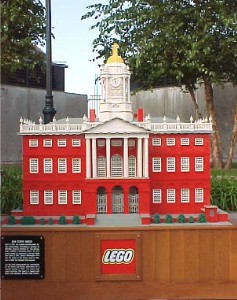 It was more a Hartford history rather than the whole state; and while it was well-presented and educational, it was sort of a mish-mash of stuff I’d seen (or yet will see) at other, more focused, museums. I do not feel compelled to launch into long-winded ruminations on the origins of the Hartford fire department or well-documented insurance industry. But now is as good as time as any to explain our state quarter (the one with the tree) and our fascination with “The Charter Oak.” 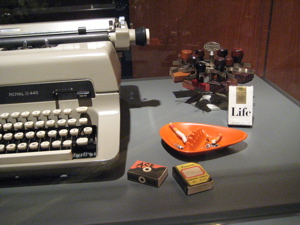 In 1662, Connecticut received its Royal Charter from England’s Charles II. A quarter century later, James II’s royal representatives attempted to seize the charter. Well, our Connecticut forebears were not about to take that lying down, even though the Brits threatened to split the state and divide its lands between Massachusetts and New York. 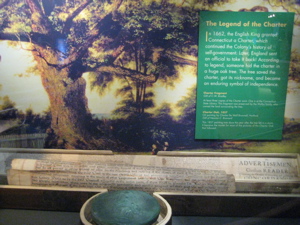 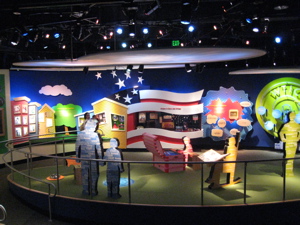 Was it an accident, or a crafty maneuver carefully plotted by the feisty defenders of Connecticut’s rights? We may never know, but what we do know is that one passionate Nutmegger, Captain Joseph Wadsworth, who was positioned outside the tavern, found himself in possession of the Charter during the ensuing chaos in the darkness. 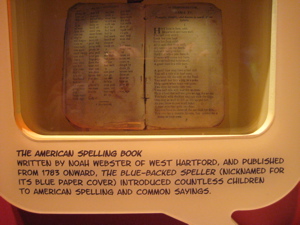 Wadsworth took it upon himself to hide the charter safely inside a majestic white oak tree on the Wyllys estate in Hartford. The stately tree was already more than 500 years old when it served its spectacular role as a hiding spot for the precious document. Wadsworth’s bold move served to preserve not only the document but the rights of the colonists. 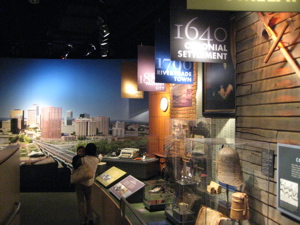 Thus, the tree earned its nickname–the “Charter Oak.” The venerable tree stood as a proud Connecticut symbol for another 150 years until it was toppled during a storm on August 21, 1856. Today, as I travel to the towns around Connecticut, I’ve found that each town seems to have a piece of the Charter Oak. Also, each town planted an oak tree from a charter oak acorn; some of which survive today. I also visited the site of the original Charter Oak. 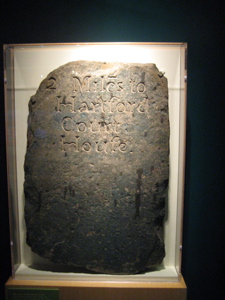 Since I’ve decided to not describe all the displays in this portion of the museum (the Noah Webster stuff will be covered at the Noah Webster House museum, the Twain stuff at the Mark Twain House museum, the Pratt & Whitney stuff at The Pratt & Whitney Hangar Museum, etc) I will just pick on little things. Like the sign telling us that ever since the 17th century people have come downtown to shop. 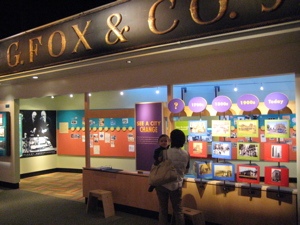 This was under a large G. Fox sign and a little story about G. Fox. That would be the G. Fox department store that was a fixture for 150 years in Hartford… until people decided they no longer wanted to go downtown to shop. It just smacked of absurdity; in a display supposedly showing us how exciting and vibrant downtown Hartford is – to frame it with a huge example of why downtown Hartford is struggling.

Then there was the Hartford Whaler gear to dress up in to celebrate another infamous local failure: 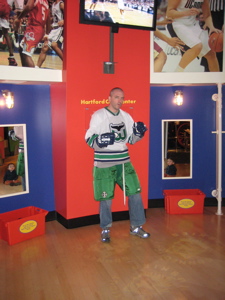 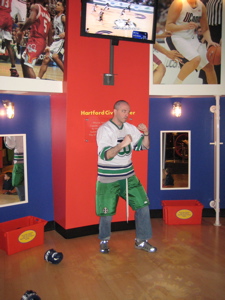 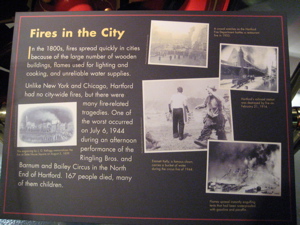 Oh Hartford, you always knew how to woo me. The coolest thing I learned was that Allen wrenches were invented and manufactured in Hartford back in 1910 and although all hex-socket head screws are called Allen wrenches these days, the true Allen wrenches are still only made here (now in West Hartford). 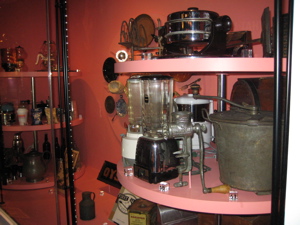 Damian and Hoang spent some time in the HUGE kid’s area playing while I explored the actual statehouse portion of the statehouse. Hoang and I attended a good friend’s wedding here just a couple months prior – which was really cool and unique, especially the flutes of champagne during the ceremony part. 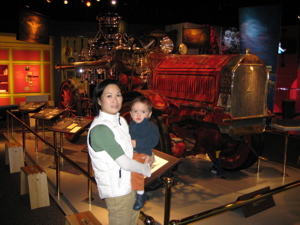 The floor is a very well preserved look at what the Old State House looked like a couple hundred years ago. Again, I could really bore the heck out of you like I usually do, with all sorts of historical anecdotes, but feel like sparing you this time. Because really, all anyone cares about is the Museum of Curiosities up on the third floor.

But first, the required pictures… 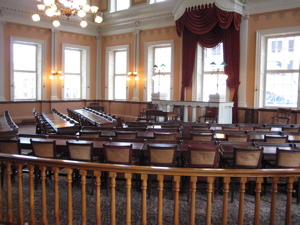 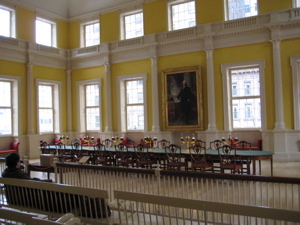 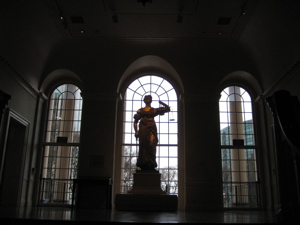 The Statue of Justice!

The original Museum of Curiosities was actually one of the first museums in the country and the whole thing today is a recreation of what the curators think most closely resembles the museum of 200 years ago. The State House is to be commended for its tenacity in tracking down some of the specific items known to be part of the collection. 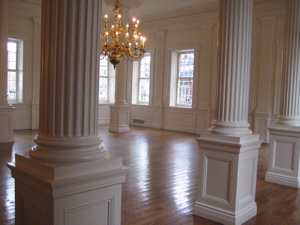 When the Old State House opened in 1796, Joseph Steward, a deacon in the Congregational Church in Hartford and a portrait painter asked Governor Wolcott if he could open a painting studio on the top floor of the building, in rooms set aside for legislative committees. The Governor agreed, and Mr. Steward was soon turning out portraits of notable citizens from Connecticut and elsewhere. Mr. Steward’s portraits hung throughout the building where they could be seen during legislative sessions. 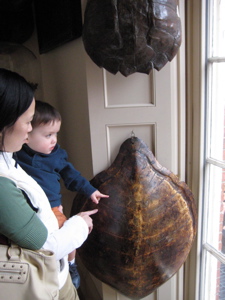 It would appear that Mr. Steward, like others of his day, was fascinated by the exotic specimens of flora and fauna, cultural artifacts and new technical devices that were becoming available in the eighteenth century. He began collecting items in his studio at the State House and discovered that his patrons were often more interested in his curiosities than they were in his paintings. 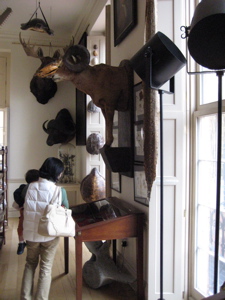 On June 5, 1797, Joseph Steward announced in the Connecticut Courant (known today as the Hartford Courant) that he was opening a Museum of Natural and Other Curiosities. Visitors who were sufficiently motivated to climb the three floors to his museum could view his growing collection for 25 cents. 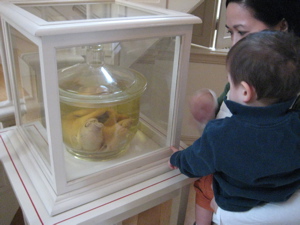 Where and how did Mr. Steward acquire his collection? It is not clear in all cases. Some items were contributed by local supporters of his museum. Others appear to have come from the farthest corners of the known world. Hartford was a busy seaport at the time. When they arrived in port, hungry for cash, seaman were more than happy to sell items which they claimed to have found in distant lands.

Mr. Steward’s advertisements in the Courant provide a good inventory of the items known to have been in his museum. From these advertisements, it would seem that Mr. Steward was something of a showman, a predecessor of P.T. Barnum. He claims, for example, to have acquired the “the God Bacchus’ shoes.” Whatever might these have been? 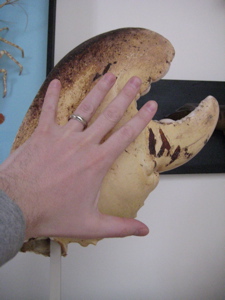 Eventually, Mr. Steward’s collection became so large that he found it necessary to move to other quarters in Hartford–first north up Main Street, then across from the State House on Central Row. Joseph Steward’s collection continued to grow until his death in 1822. Where items in his collection finally ended up remains largely a mystery. 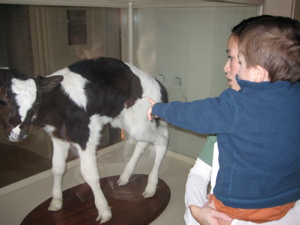 Steward’s Museum has been carefully researched from diaries of the day and local newspaper advertisements. The Old State House Museum of Natural and Other Curiosities has been assembled in the very building where Steward’s museum opened over two hundred years ago. It reflects the spirit of the museum collections that became popular during the seventeenth and eighteenth centuries.

The two-headed calf is one of the most enduring items in the collection. The Connecticut Historical Society felt they needed to locate another one to call their recreated museum a success. They combed the world for a couple years and then, on February 23rd, 1996, the State House received a fax from Michigan. The Midland Daily News reported that “a calf with two fully formed heads” had been still born at the Golden River Dairy Farm in Cheboygan. 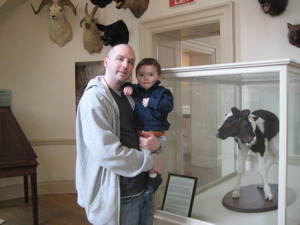 “Hi”
“Hello”
“I’m the executive director of a Museum here in Connecticut about our state’s history and… oh what the heck, I want your dead two-headed calf.”
*click* 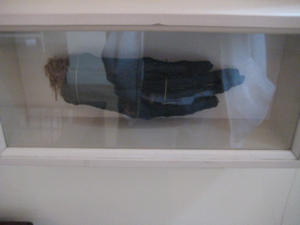 We enjoyed our day at the Old State House and especially at the Museum of Curiosities. Damian caused us to rush it a bit, but we were fine with that. Because how much of “The offices of the comptroller and the treasurer were divided into four rooms on the south side of the open arcade. The treasurer’s rooms were on the west end and those of the comptroller on the east. Each set of offices had an inner room and one that was accessible from the hall. The walls were probably plastered and whitewashed” can you take?

On our way back to the car, we paid tribute to Hartford’s founder, Thomas Hooker. Yeah, I used to think that was funny fifteen years ago too, so it’s okay to chuckle. 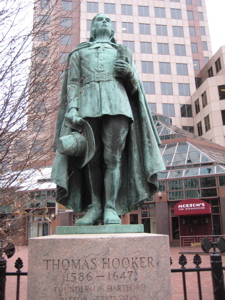