When people talk Washington, they either talk “Gilmore Girls” or they talk Steep Rock Preserves. There’s no denying the town has that “Newhart” New England charm and has some incredibly beauty spots. (If you’re confused, the creator of “Gilmore Girls” cites Washington as her inspiration for whatever town that show takes place in. 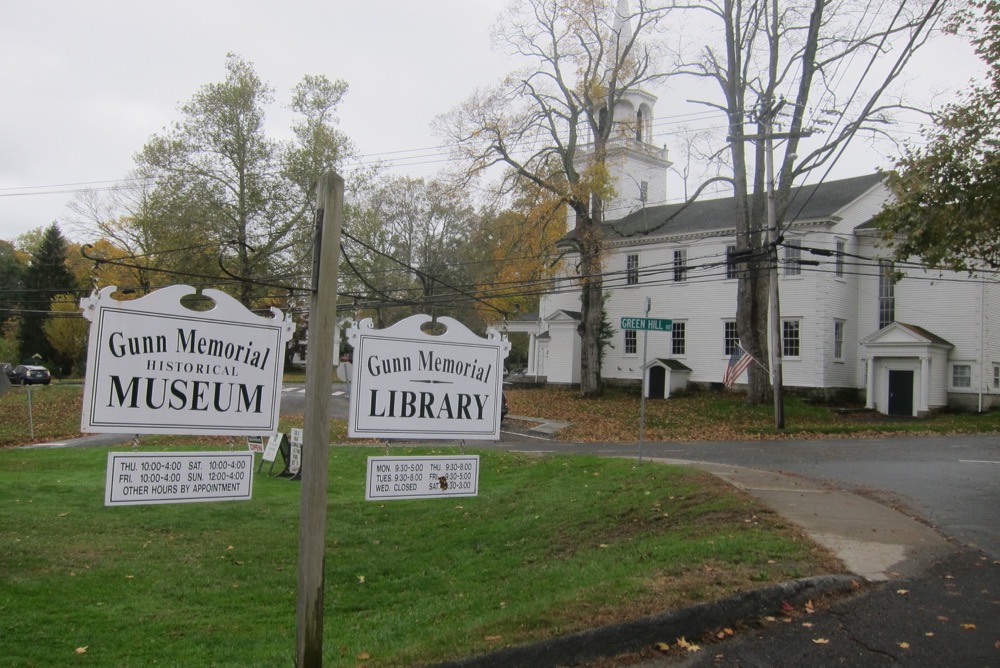 But people shouldn’t forget that Washington has history! It’s supposedly the first town named after George Washington for one thing. And it has the Gunn Memorial Historical Museum for another!

I first need to talk about the Gunn name. The museum, which is located next to the Gunn Memorial Library, is near the grounds of a private boarding school called The Gunnery. Actually, it was called the Gunnery for 150 years, but changed its name to Frederick Gunn School in 2021. 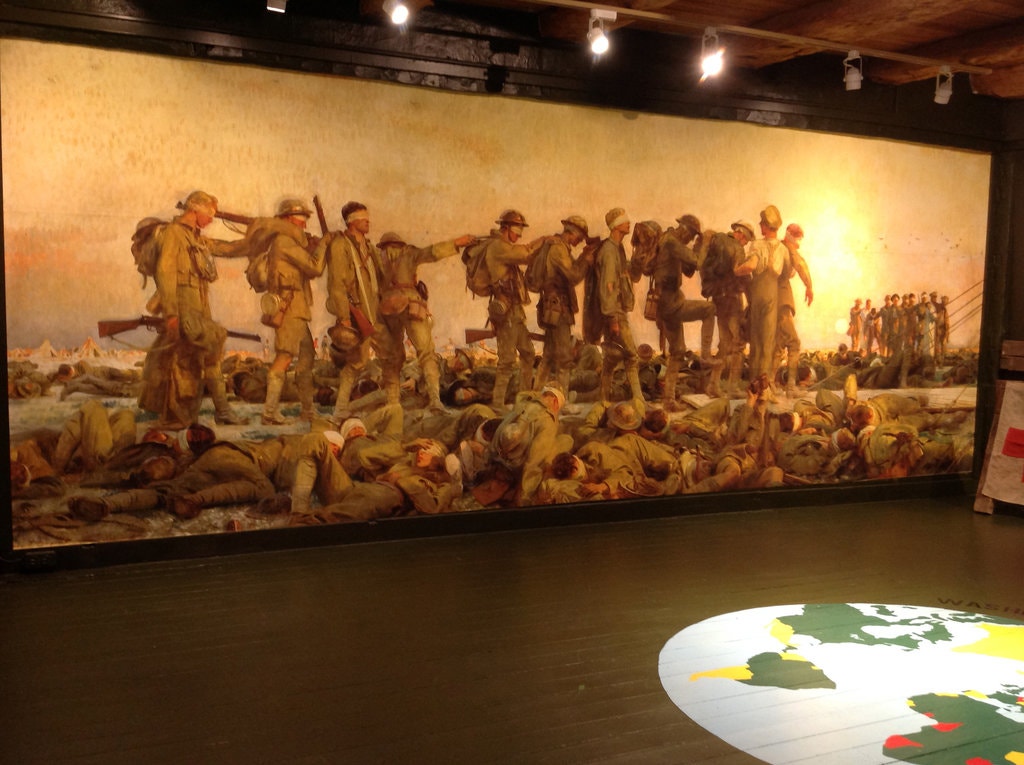 A reproduction of the painting “Gassed,” by John Singer Sargent, depicting the aftermath of a mustard gas attack.

The school is another of those storybook beautiful campuses where tuition and boarding will run you about $70,000 per year. Frederick Gunn himself was a teacher, abolitionist, and father of recreational camping in America, based on his belief that strength of character was the goal of education. “The Gunnery” was a name started by the students in the 19th century, and it made sense for a while because military prep and service was a big part of the school’s tradition.

But in 2021 I guess the whole gun thing at high schools got to be a bit much. And besides, Frederick Gunn deserves the honor. He seemed like a pretty good guy from all accounts. But what about this museum? 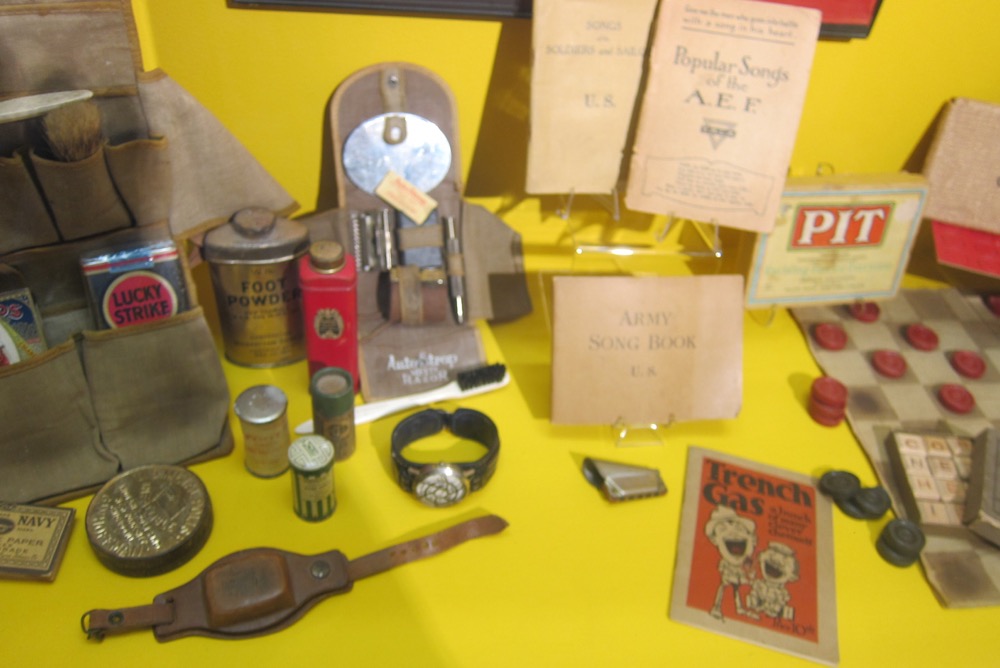 The mission of the Gunn Historical Museum is to collect, preserve, and share the objects and stories which illuminate the history of Washington. Our beginnings date back to 1899 when the local chapter of the Daughters of the American Revolution opened the Judea Historical Room in a house on the Green. When the Gunn Memorial Library was built in 1908 the collection was moved across the street into the lower level of the library. In 1965 June Willis bequeathed her house to the library and the museum moved next door.

It’s an interesting museum because while it serves as the de facto history museum of Washington, it’s somehow different. It operates on a higher level somehow. I mean that The Gunn seems to go all out on exhibits; focusing on one major topic at a time rather than the usual mish-mash of old milk bottles and quilts I usually see. 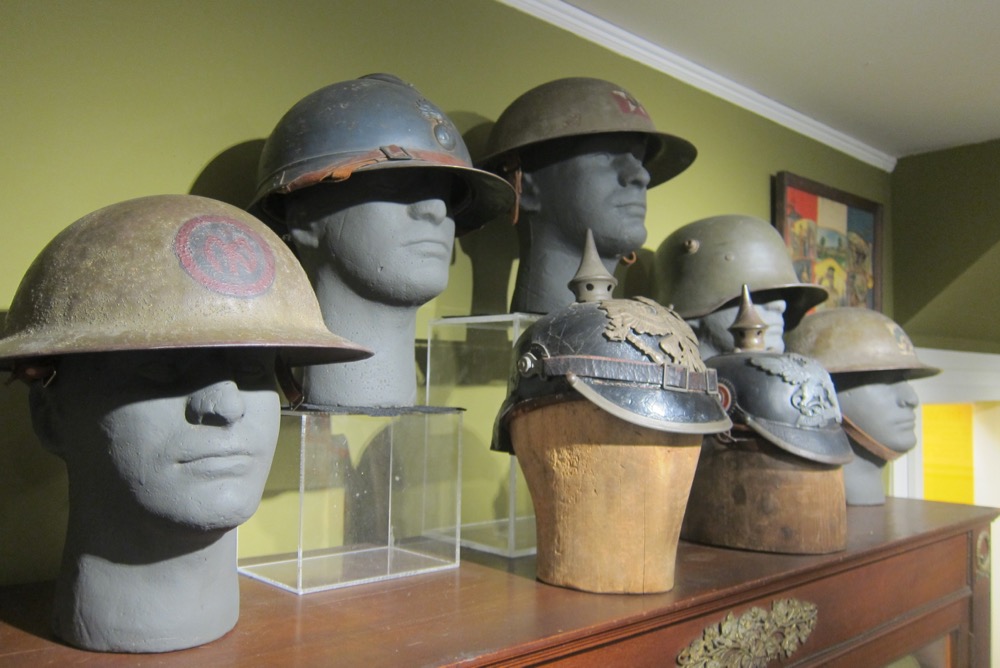 Hoang and I visited during an exhibit called “Over There: Washington and the Great War” and right out of the gate, very few of the 168 other town museums could have pulled off what this place did. And yes, the affiliation with the school certainly helps. Holy cow, this was immersive.

The exhibition commemorated the 100th anniversary of World War One, one of the largest and bloodiest conflicts in history, where over 70 million military personnel were mobilized around the world and more than 10 million combatants and 7 million civilians were killed, including several from Washington. Over 100 men and women from Washington, and more than 150 alumni and faculty from The Gunnery (as it was known at the time) served in The Great War. 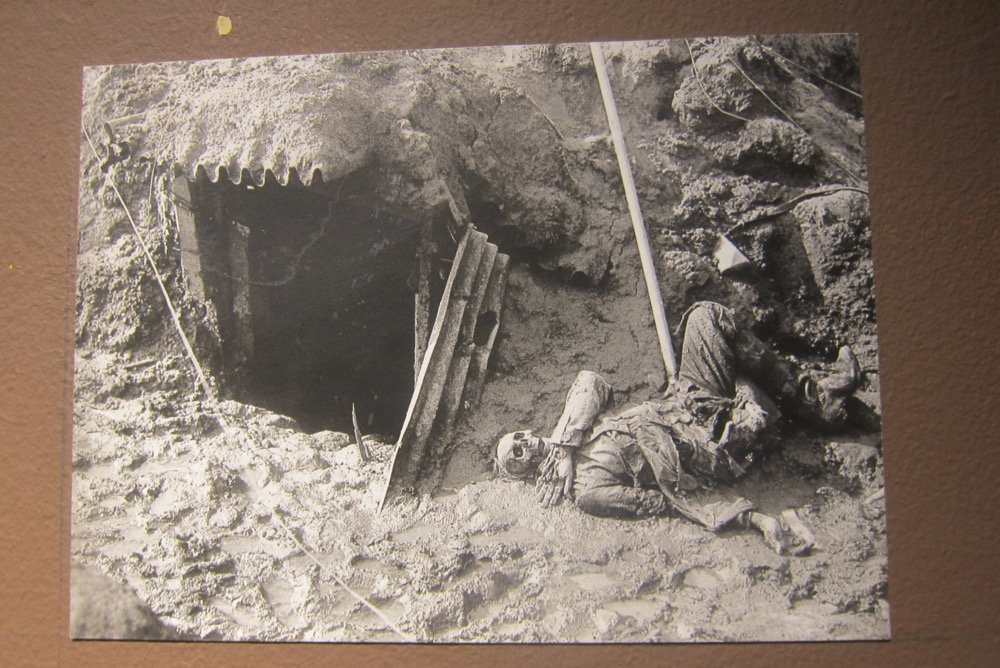 Students from The Gunn School conducted research and their findings became a section of the exhibit. If I had one complaint about the overall presentation, it would be that it was too wordy. Now, I’m not a proponent of digitizing and gamifying museums – not at all. And information is great! But there were entire walls of text here and, well, it was a bit much.

But man, this was still really well done. And very personal. Letters, pictures, and an array of period artifacts from the museum and local families were used to explore the dramatic experiences of Washington’s soldiers, along with the extensive support efforts that were happening on the home front in Washington through such organizations as the Sister Susie Society, the Red Cross, the Women’s Land Army, and the Home Guard. The artifacts were real and the emotions came through in the letters and pictures. 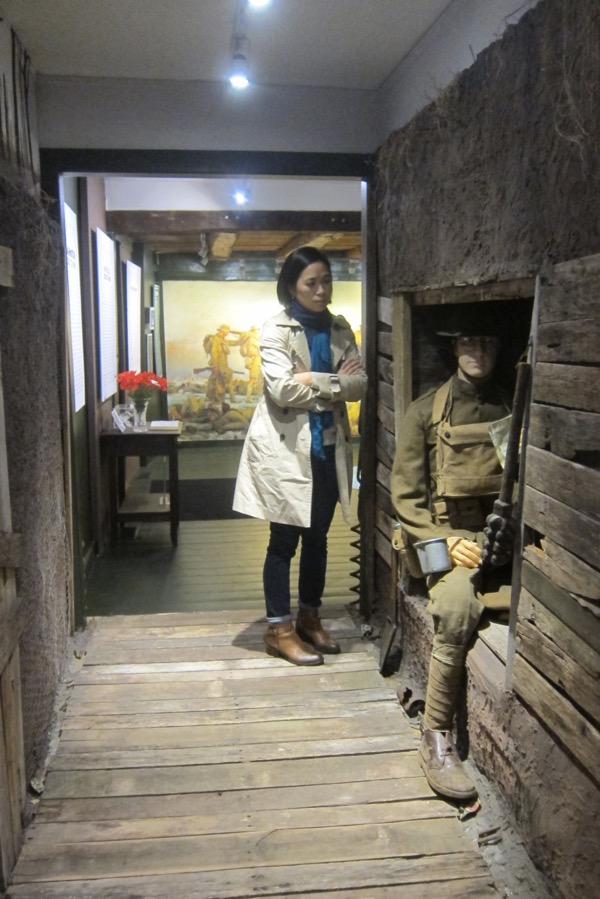 An hallway was transformed into a WWI bunker! Complete with barbed wire, artillery shells, rubber rats, an empty pack of Lucky Strike cigarettes and walls of what looks like mud held back by chicken wire. At a local history museum!

It wasn’t quite Smithsonian quality, but it was astonishingly well done. I was surprised at how grizzly they decided to portray the trenches which were, of course, awful. (Side note: The movie “1917” is incredible in its depiction of trench warfare.) 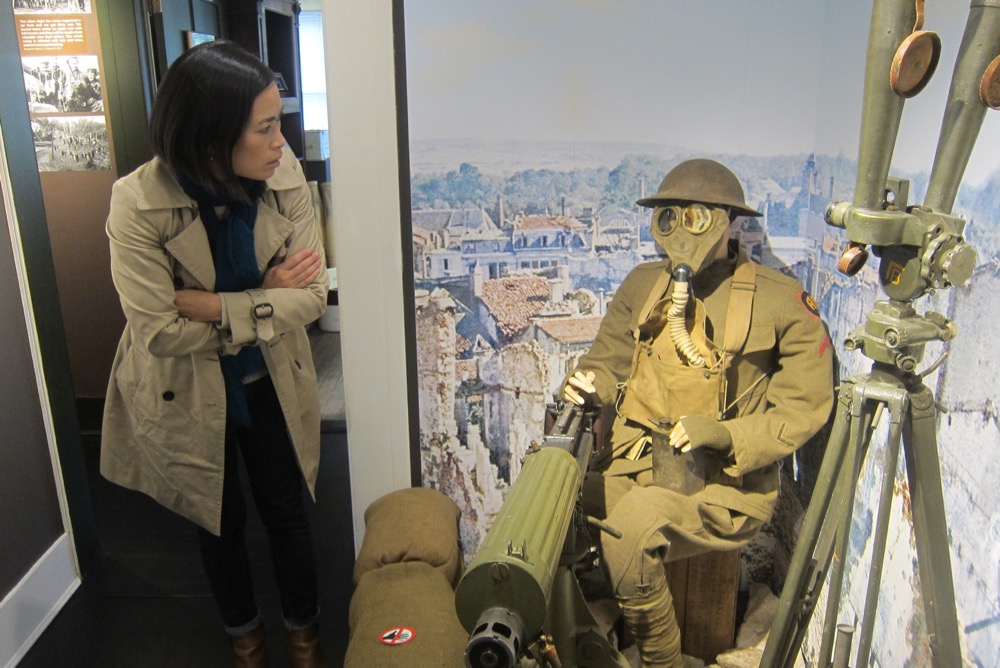 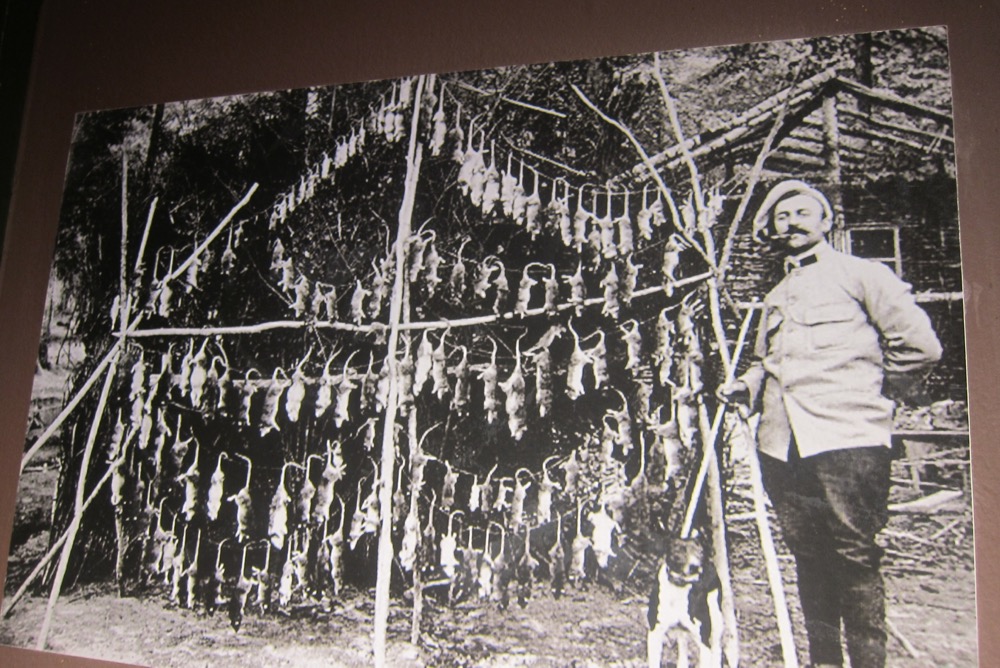 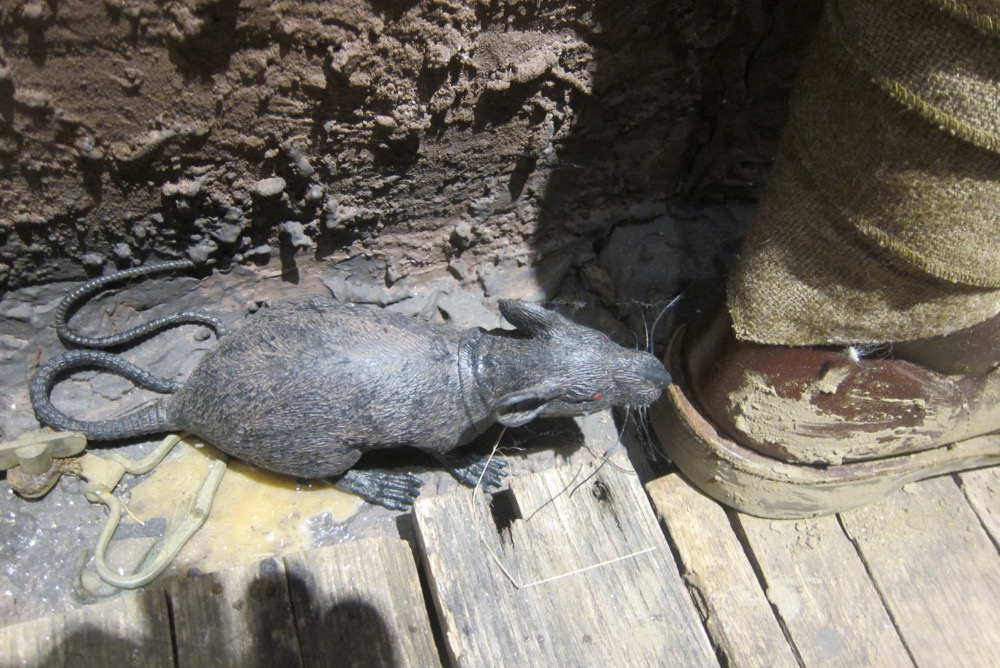 The Gunn Museum consists of five rooms and all five were filled with WWI stuff – and I read that this was all done with a budget of $3,500 which is bonkers. But when the call went out to locals for donations, the items came flooding in.

The museum also had copies of letters written by a music teacher at the Gunnery who went to France to help soldiers at the battlefront. One Washingtonian, Frances Hickox, was 53 in 1917 when she volunteered to go overseas and work to help the troops as a secretary with the YMCA. Town residents raised $1,000 to pay for her voyage. 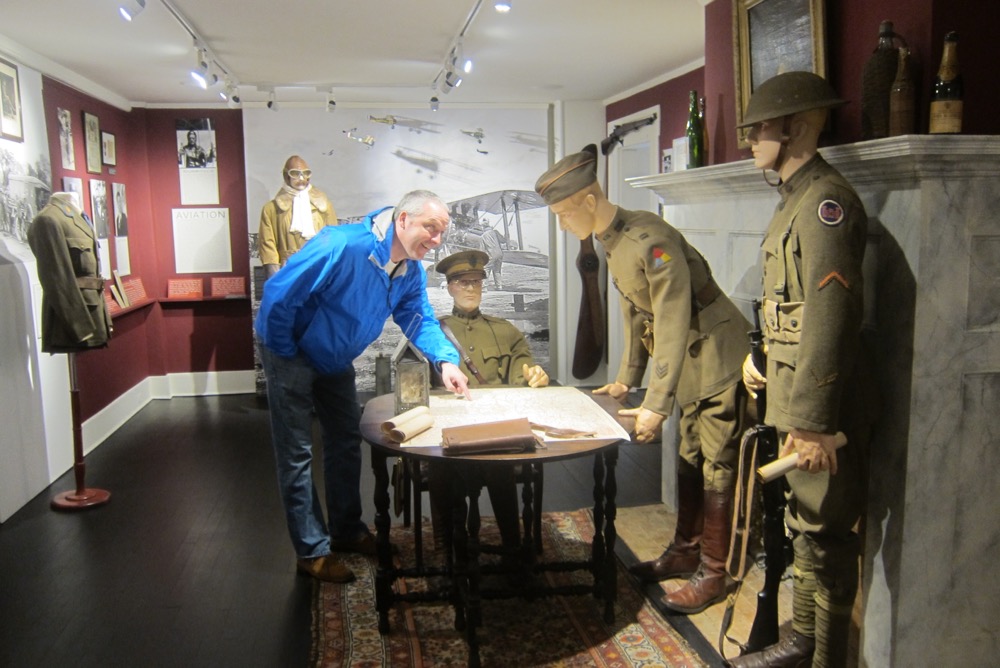 She mothered many soldiers and wrote letters home to parents of the deceased. In one such note, Miss Hickox said, “If you could have seen this and heard the roll of the drums and the funeral march so beautifully played by the band and then the solemn military ceremony of firing a salute and having the bugler play the last ‘taps,’ I am sure that you would have forgotten some of your grief in a burst of pride.” 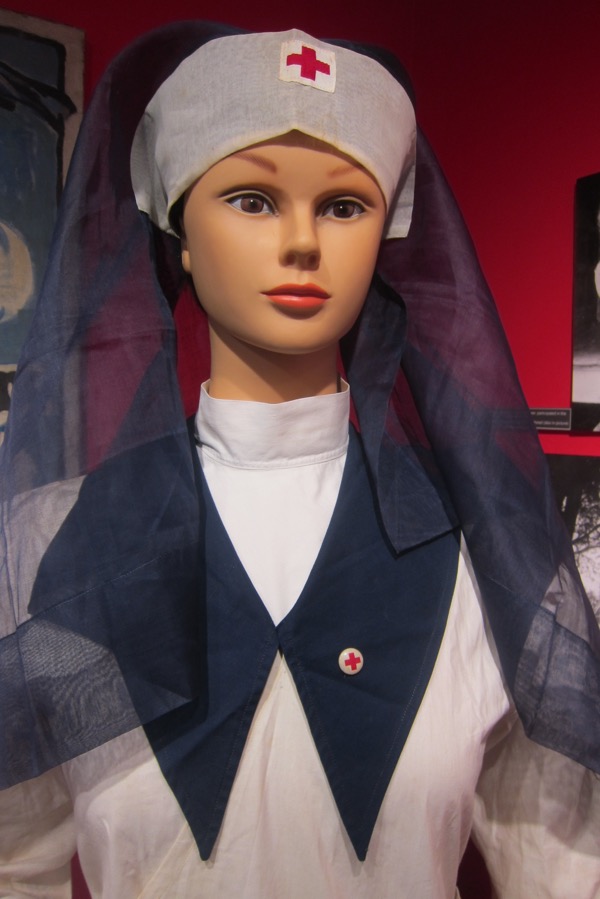 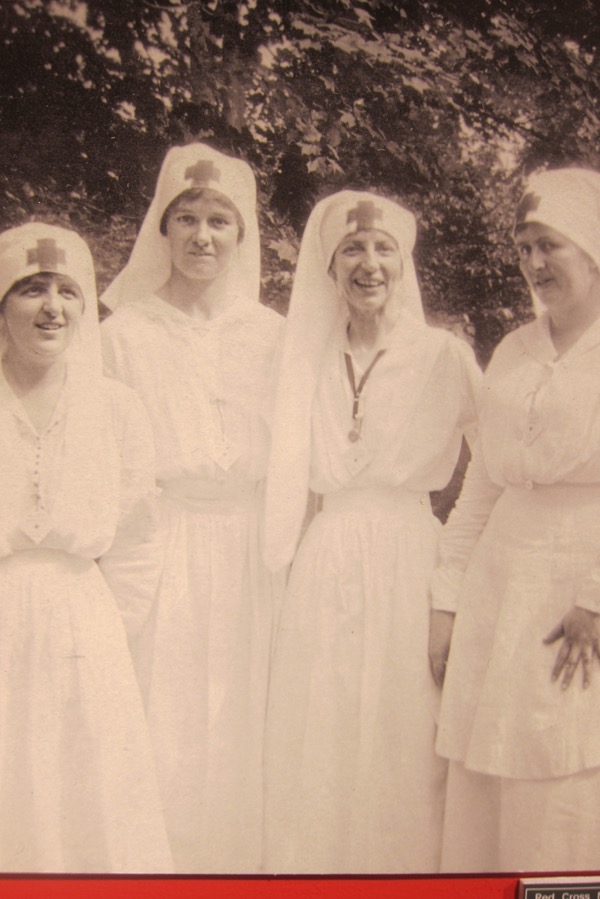 Moving stuff. And remember I said that town history museums always have quilts? This one did as well, but they were topical for once. Two World War I-era quilts hung in the center of a room. One of them had blue embroidered signatures of soldiers’ family members, some with a gold star to indicate a loved one killed in the war.

Another display was devoted to a group of wealthy women from New York who came to Litchfield County on the weekends and were part of a reading group. When the war began in 1914, they called themselves the Sister Susie Society after the chorus of a popular war song and got the whole town involved in sewing bandages, knitting clothing for the Allies and raising funds for the Red Cross and other relief groups. 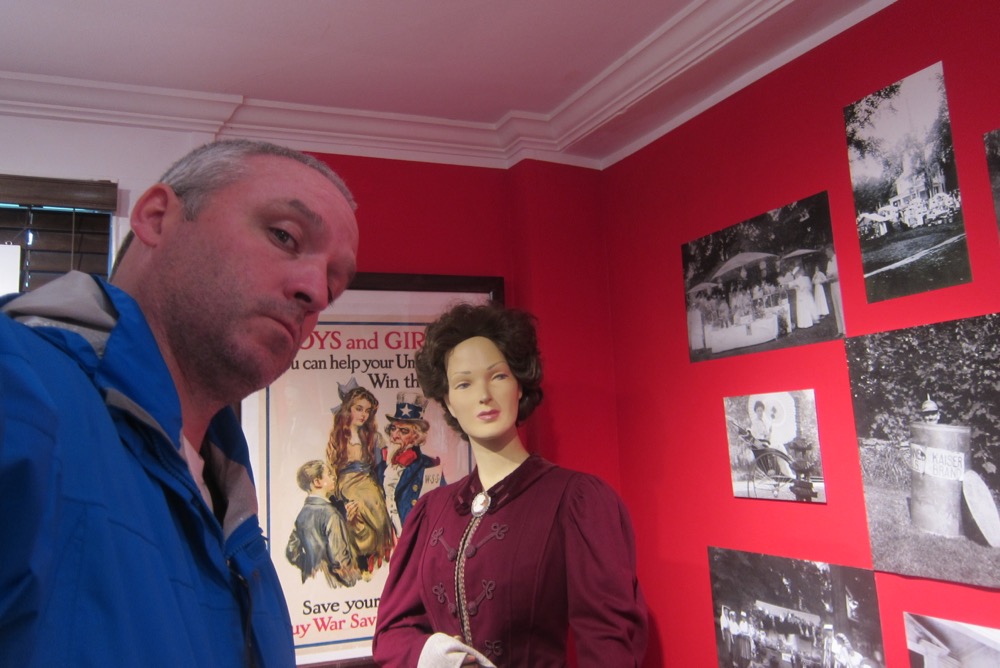 I’m not exaggerating when I say that this was one of the best small museum exhibits I’ve ever seen. Just really, really well done and focused and was educational with an emotional impact. And for a war in which the United States lost more than 320,000 soldiers (only six from Washington), it’s important to strike the right tone. 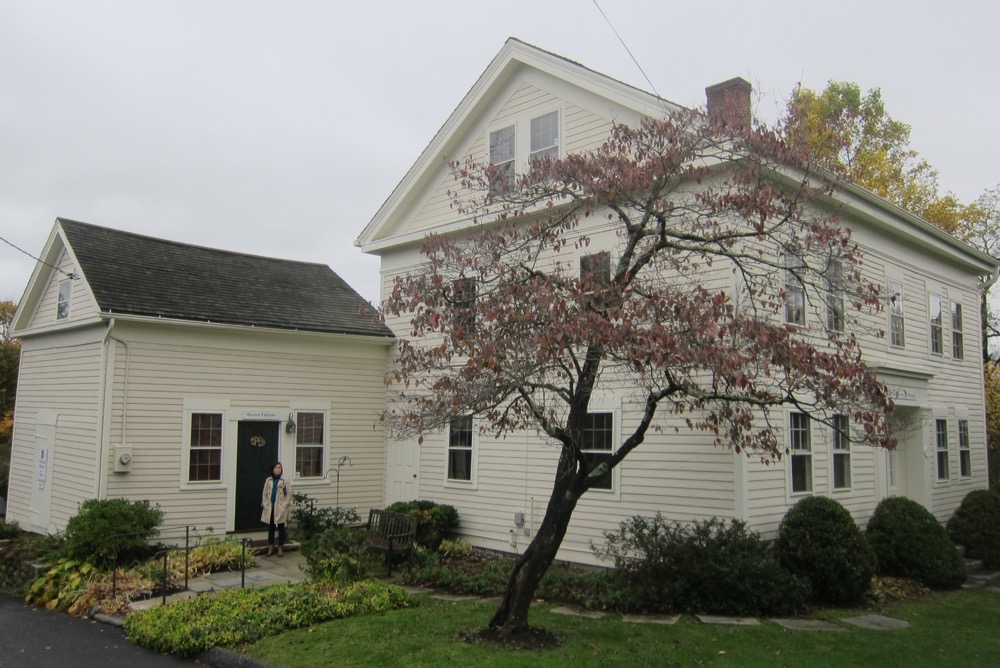