I don’t go to church and I will never go to church, other than for weddings and funerals for people who have such things in churches. I am fortunate to have married an incredible woman who also has no need or want for attending churches. However, we both certainly appreciate the beauty of many, many (almost always) old churches. The Calvary Church in Stonington is an great example of a ridiculously beautiful church. I love the look of this place. It helps that it’s on Church Street deep in Stonington Borough too. 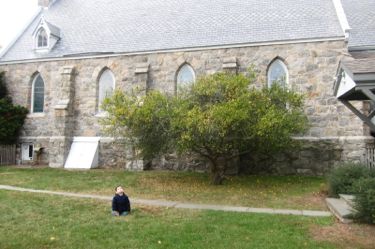 However, I will readily go to any and all churches with national champion trees on their grounds. (And, I suppose, I will go inside churches with CTMQ worthy things in them – and there are certainly a few.) I had dragged my poor family all the way to Stonington with the idea that we’d hike a little hike, grab some lunch at the trusty Dog Watch Café on the waterfront, bask in the glory of the largest hardy orange tree in the entire country and then celebrate nearby at the wonderful Beer’d Brewing Company.

This plan more or less went off without a hitch. 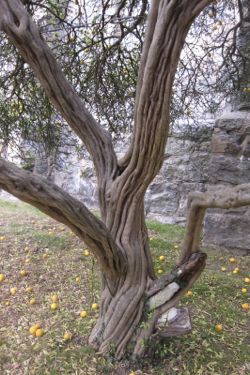 Other than Damian refusing to go check out the tree and Hoang having to stay back in the car with him, that is. Their loss.

Calvin and I found our way to an unlocked gate and found the tree easily. It was the one with all the little oranges on it. I was enamored with this messy looking rather squat little tree. My first thought upon seeing it was that this was another of our “national champions” which are national champions only because no one else has claimed a bigger one in another state. I mean… come on.

But then I poked around online and could not find one that looked bigger. Despite Wikipedia stating that Poncirus trifoliate is “a large shrub or small tree 4–8 m tall,” which translates to over 26 feet tall. Our little hero tree is only 17 feet tall. So who knows… I do know this has been a recognized national champion for at least 4 years, so maybe hey, this thing is legit. (Update: Still national champion in June 2020, so we’re over a decade now!) 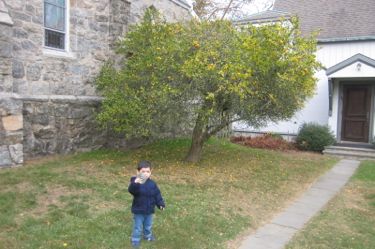 It certainly is fruitful. There were a million of the little bitter oranges on the tree and on the ground. They are not edible fresh (way too bitter) but can be made into a delicious marmalade. Apparently, the church used to (still may?) make marmalade from this tree, which is darn cool. The fruits have a downy fur on them like a peach. I took a couple home and did taste it and yeah, don’t eat these things.

I took my terrible pictures and returned to the car with the fruits. Hoang asked how it was and smiling ear to ear I exclaimed, “it was awesome! You should have seen this thing!”

At that, she grabbed the camera and looked at the pictures. Her little 2 year old standing next to this national champion could not hide the fact that it is a small tree. She was speechless.

Speechless at what a doofus her husband is for trying to pretend this tree was awesome. Sigh. 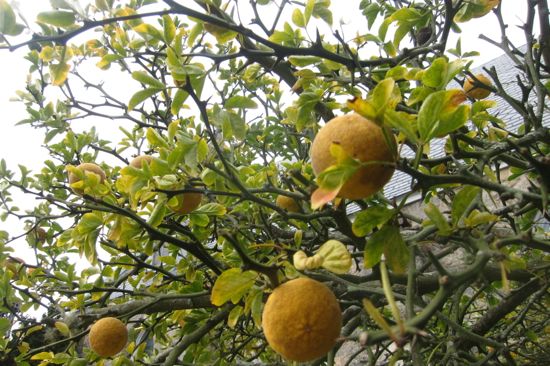 A little later at the brewery while chatting it up with Aaren the owner and brewmaster, Hoang was sure to make fun of me and my tree, calling it a “bush,” if you can believe that. I defended it though, with valor. “Dude, there is a national champion tree 4 minutes from here in the middle of Stonington Borough – and It’s an orange tree!” (It’s not really an orange tree like an orange orange tree, but whatever. I had a tree to defend.) Aaren looked skeptical. I pressed forward. “We have a bunch of national champion trees in Connecticut and yeah, some are small, but no one else has claimed a bigger one. There are a couple guys completely devoted to this stuff. And I appreciate them and do my best to find each and every one.”

Aaren, swayed by my enthusiam, promised to check out the little hardy orange tree behind the pretty church on Church Street. Then I drank his delicious beer.

My work here is done. 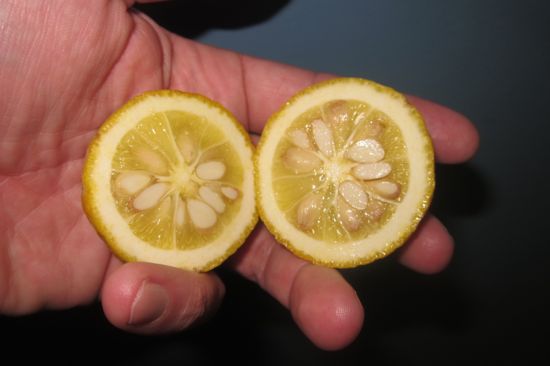