I’m going to do a rare thing here in Harwinton. I hiked all seven currently trailed properties on one (rainy) morning, so I’m going to sort of serialize the write-ups. If for some reason you want to start at the beginning, go here, to the Kalmia Sanctuary down the road. 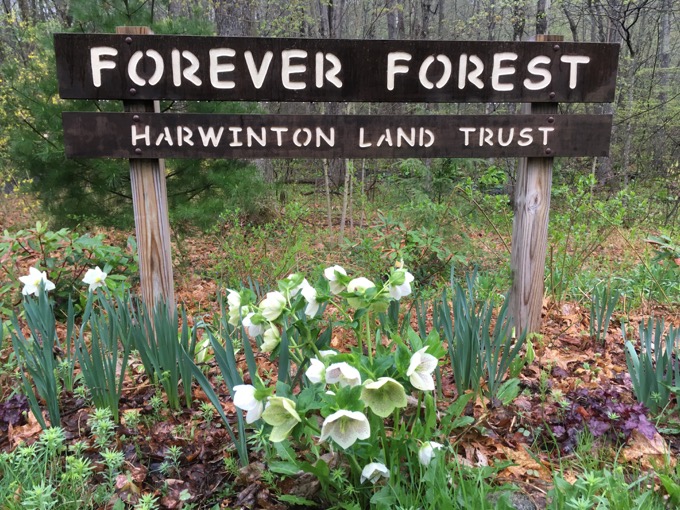 The rain picked up a bit as I made the short drive from Roraback to Forever Forest. There was no way I was going to quit my “Hike Harwinton” morning though. I was here and I was going to finish.

As i began the walk down the trail here I was again amazed at how well-kept the Harwinton Land Trust trails are. Look at this! The first 100 yards or so of Forever Forest is a graded, graveled trail! 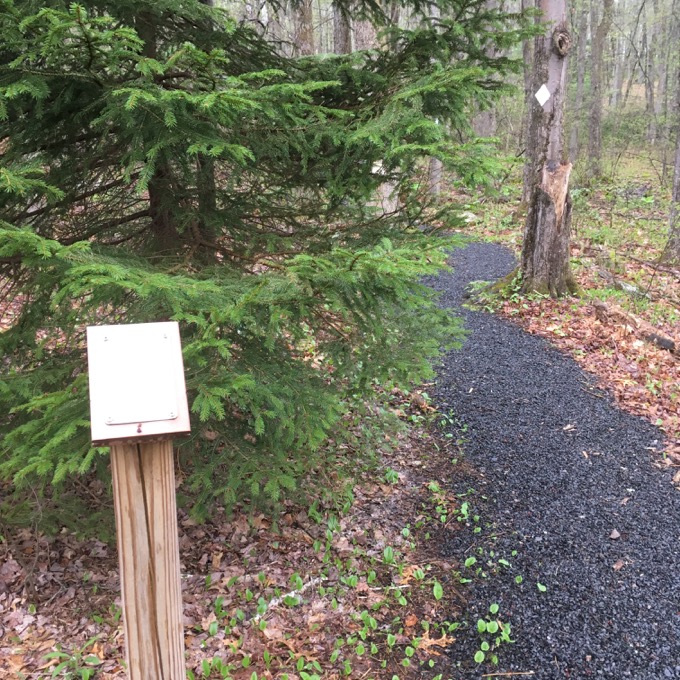 The HLT has packed a lot of trail into a small space. And yet, it doesn’t often feel as though that’s the case. I imagine that if there were 25 people walking around here at the same time, it would be rather ridiculous, but… I’m fairly confident that’s never the case. 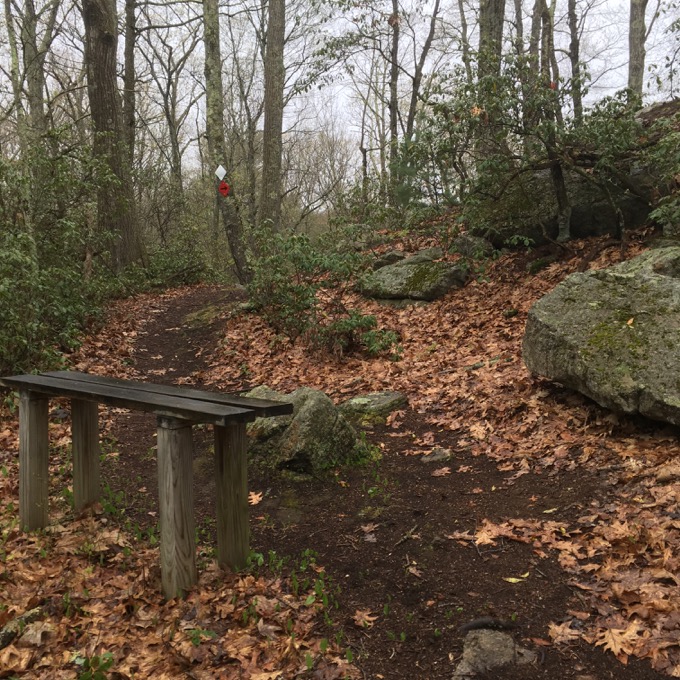 Although Forever Forest is only 12 acres, visitors will be surprised by how much it has to offer. The area has a scenic and interesting trail system that leads hikers along pretty marshes, over ledge promontories, and through distinct stands of hardwood trees and mountain laurel.

There are a total of 26 species of trees present at Forever Forest. This represents a high diversity of trees for such a relatively small piece of land. Because of the high diversity of trees, the Harwinton Land Trust saw that the area could be used for educational purposes. We have used the trail system to serve as a tree identification walk. A representative specimen for each species of tree was located along the trails. Sign posts were placed at each of the specimen trees. 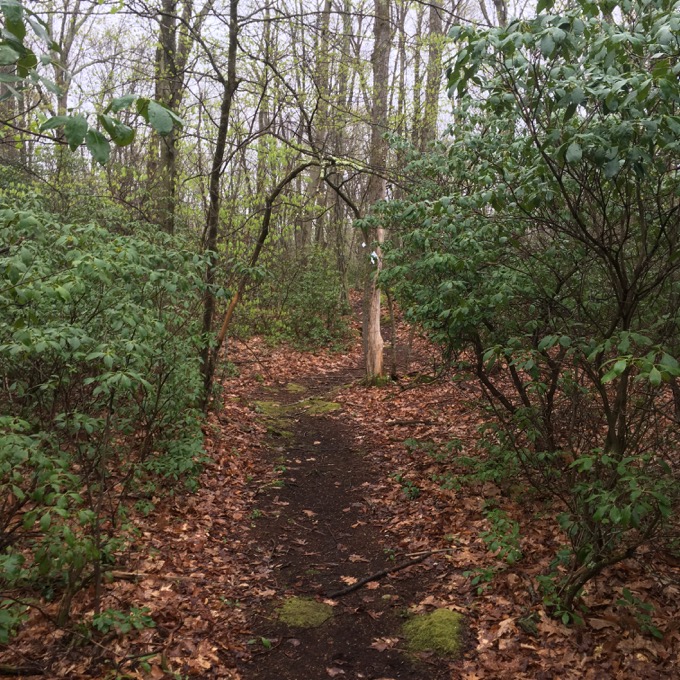 Excellent. Yes, there are informational signs along the main (white) trail to the “back” of the property regarding those trees. It gets a little crowded with the signage at times, but hey, people need to learn their pignut from their shagbark hickories. 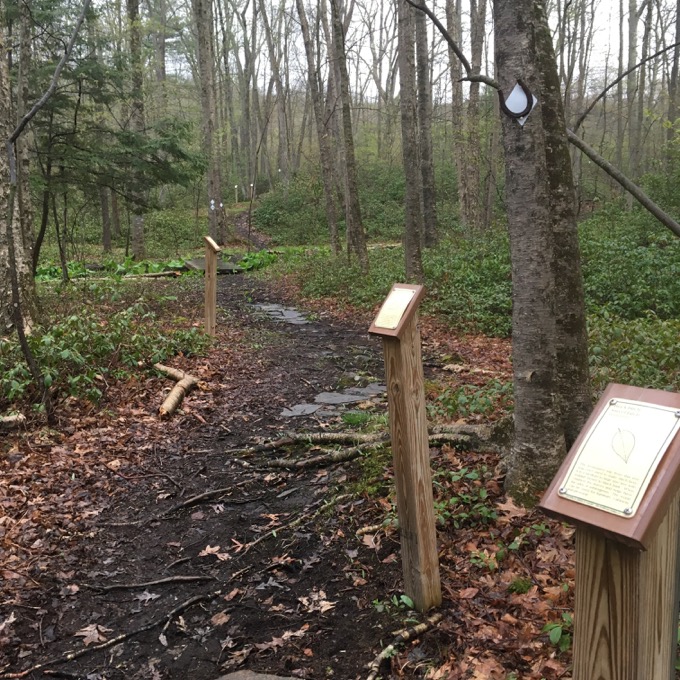 I can’t really think of too many places in the woods in Connecticut that affords visitors the opportunity to see so many different species of trees in such a compact little area – with a guide and signage. Good job, HLT. 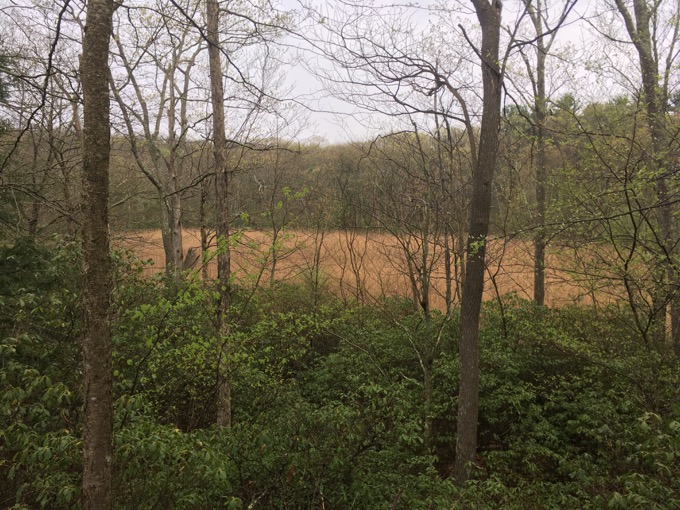 The trails here are obviously short, but still fun to walk. They are sure to ascend each little hump on the property. I went up one short spur trail which afforded a partial view of a marsh, but I also stumbled upon a geocache.

I didn’t know the HLT had a Geocache series, but if you’re into that, here’s another reason to Hike Harwinton! 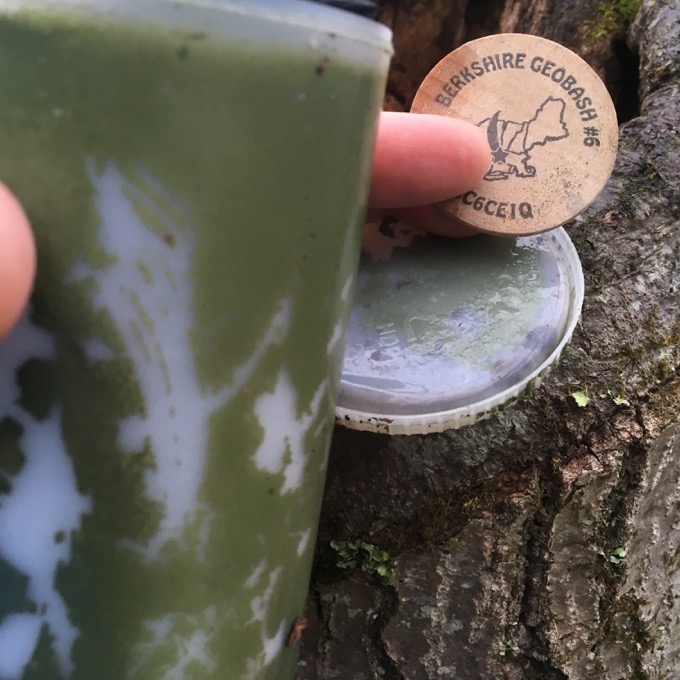 Since it was raining rather steadily, I’ll let the HLT explain some more about this property:

As you walk over the footbridge of the small stream (Kelly Pond Brook) flowing out of the large marsh, you’ll notice that the bottom of the stream is covered with flat rocks. The rocks are probably the smooth sand stone that was once used to manufacture whetstones (stones used to sharpen knives). These rocks were exposed by the erosive action of the stream, and are a sign of the sand stone deposit buried below the ground’s surface. The area was noted for its manufacture of whetstones in the past. 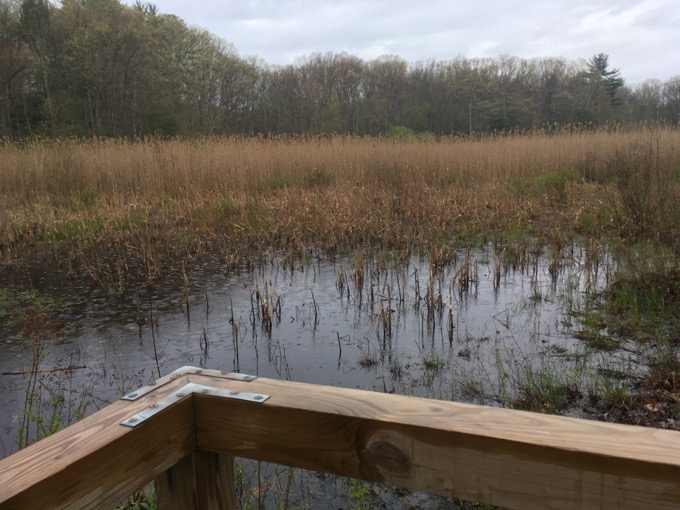 Yeah, I missed that on my walk. But I did make it “all the way” to the far end and did walk every trail. There is a lot of laurel here, so when it blooms in June, I imagine that this place will be even nicer – and will also bolster the illusion that each trail isn’t actually right next to another trail.

Which is probably the coolest aspect of this property. 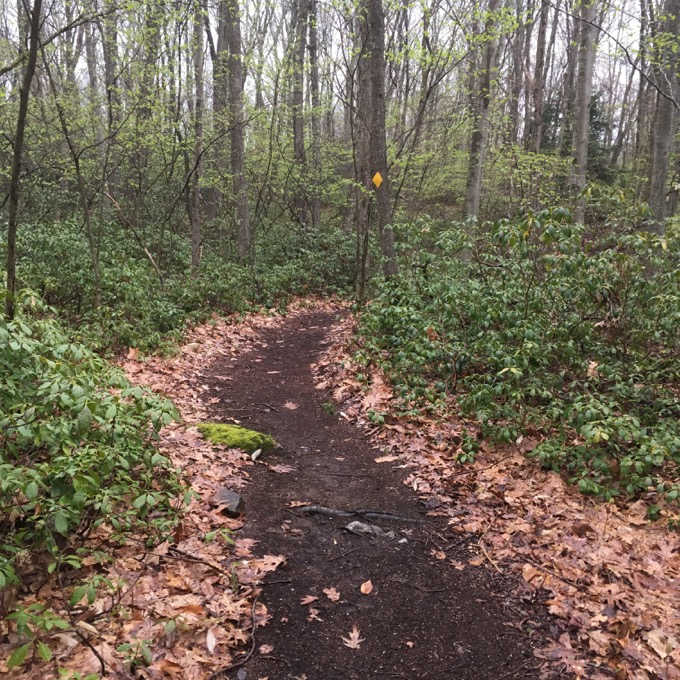 It’s so cool that I revisited in 2020 upon learning that the HLT had extended one of the trails. I didn’t bother re-reading this page before heading out on the trails. I was under the mistaken impression that the entire blue trail was new. So I parked and hoofed it out to the “new” trail to keep my “completist OCD” in check.

Now, a few days later as I write this sentence, I’ve skimmed the above and learned that the new trail extension is a mere blip. 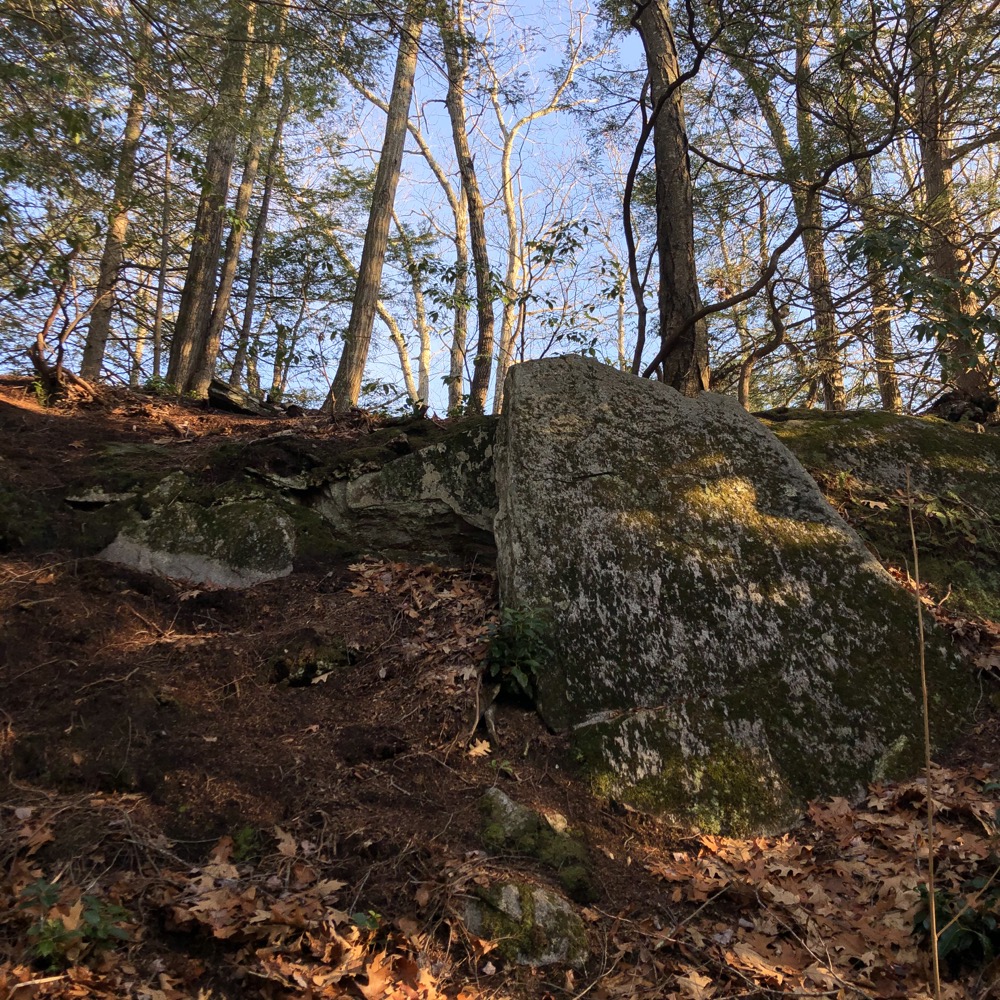 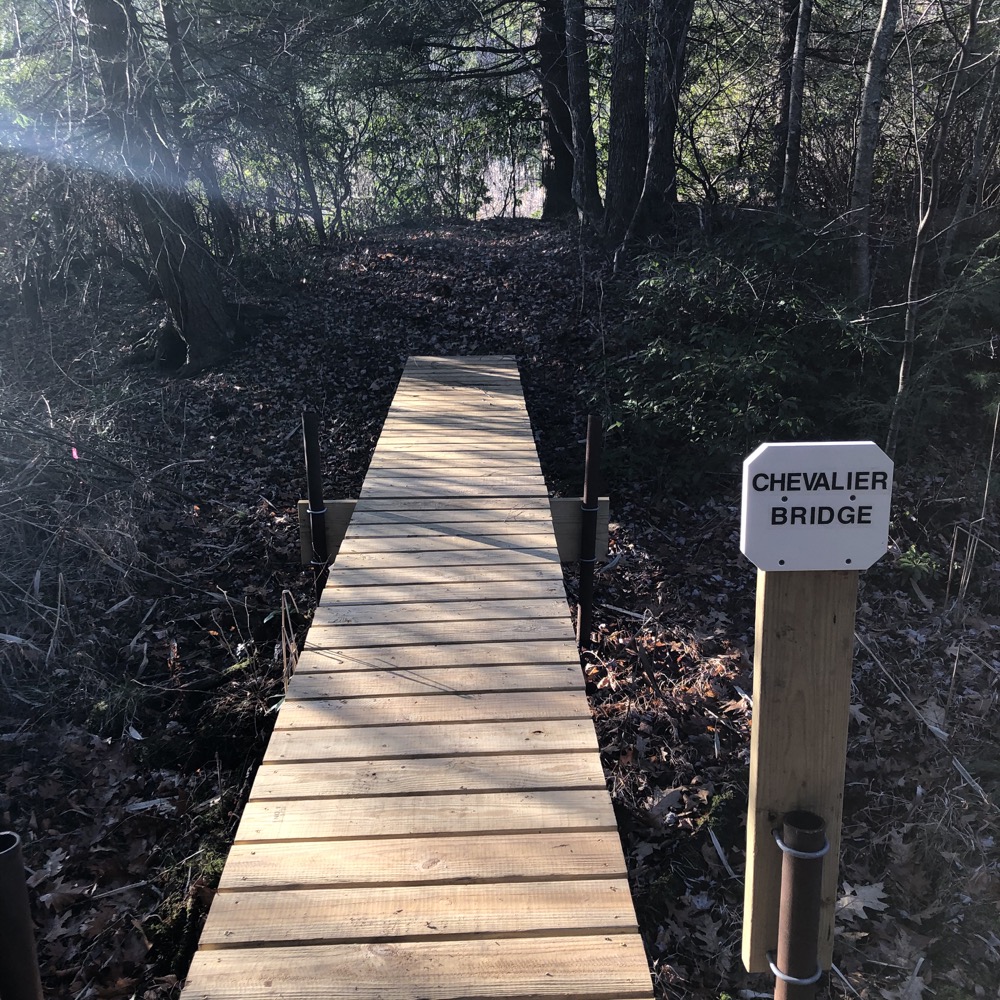 Last fall (2019), a new trail trail was cut through our newly acquired area of Forever Forest. The trail is blue blazed and extends beyond what’s know as “Bernie’s Overlook” to the tip of the promontory. The new trail then loops back to the white trail, exiting at the bridge over the outlet stream of the marsh. The trust is in the process of building bridges and boardwalks from the tip of the promontory to the two “islands” in the surrounding marsh. 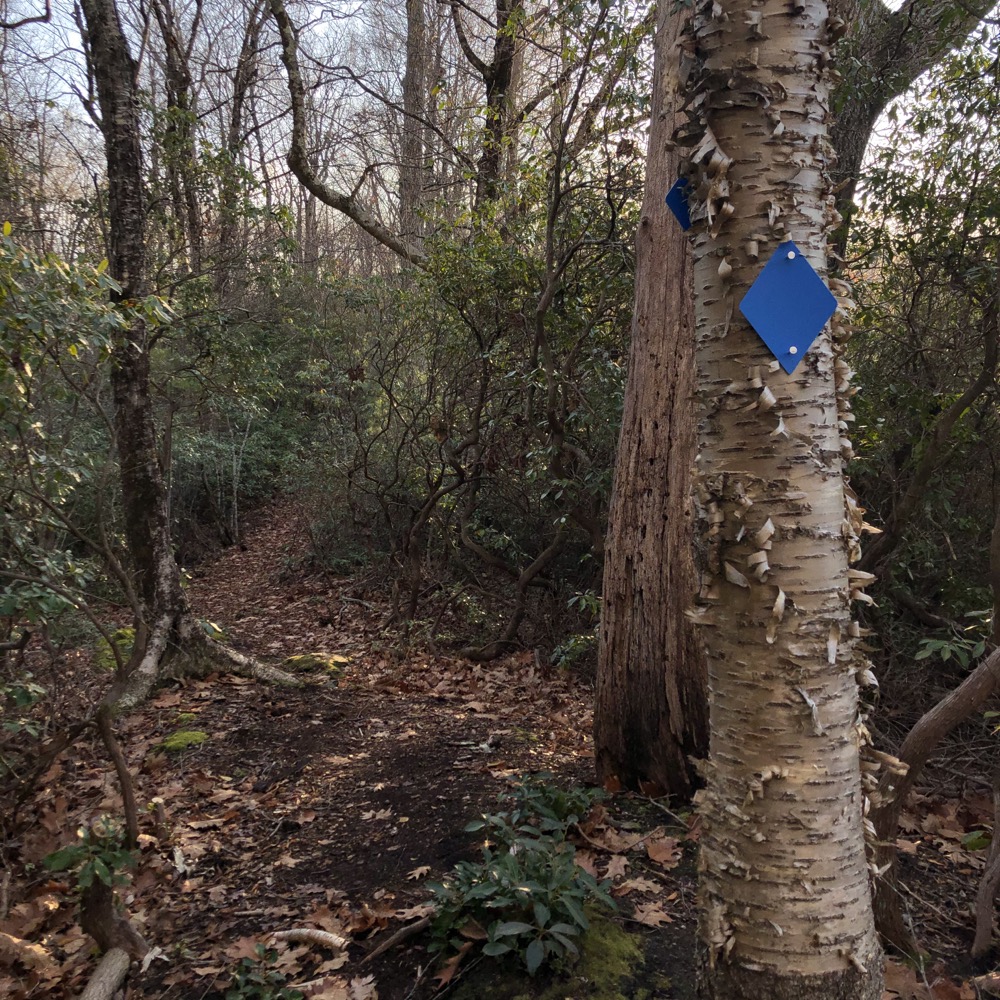 I reached the “promontory” and must admit… I didn’t remember being there two-and-a-half years prior. I’m losing it, folks. The new trail, while incredibly short, took a couple switchbacks down to the new bridge over to the marshy island.

At that point, it sort of faded a bit, but was easily followable back around to where the next bridge will be built and then looped back around to the “promontory.” The trail had been cleared, but not blazed. But I’ve hiked it and just for ha-ha’s, if the HLT keep adding steps at Forever Forest, I’ll forever keep coming back. 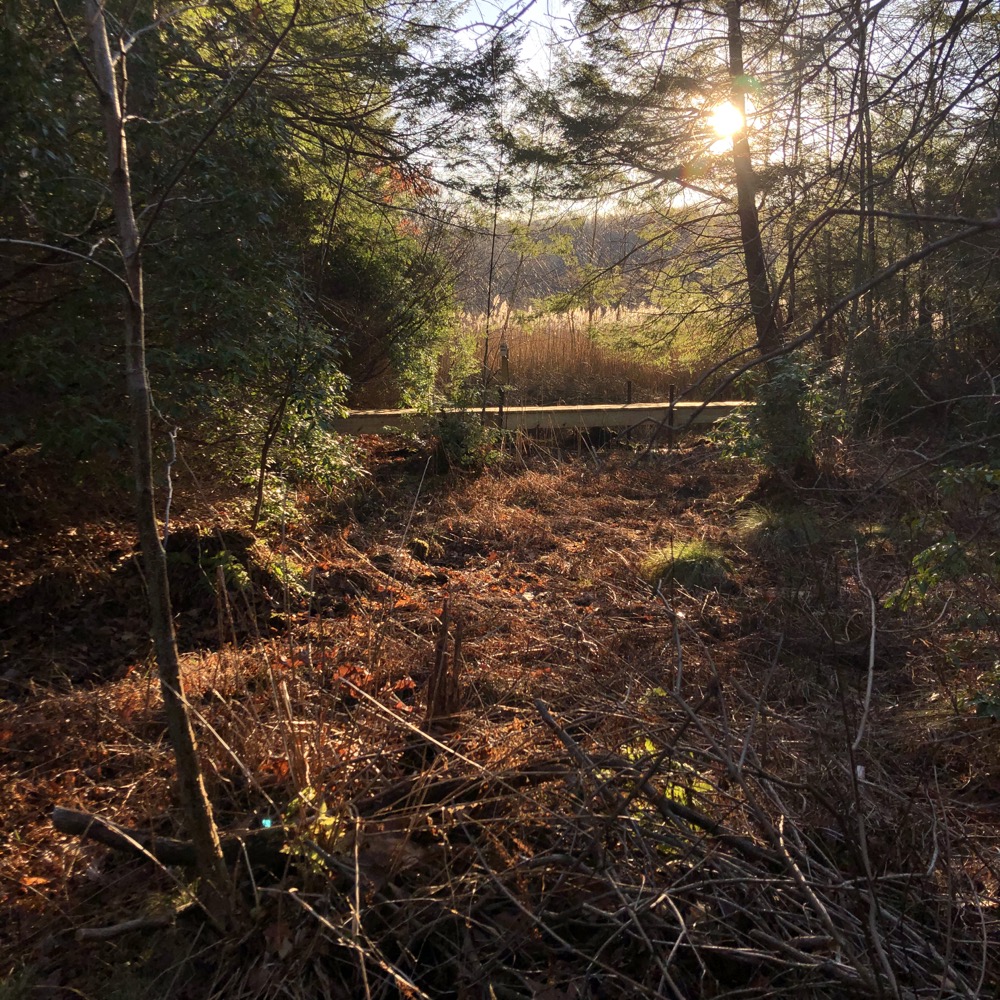