If you are reading my thru-hike of the Hockanum River Trail in order (generally south to north), you have already read the Pitkin Trail page. If you haven’t, it’s a fun one and you should. Better yet, start at the beginning with the introduction and catch up. 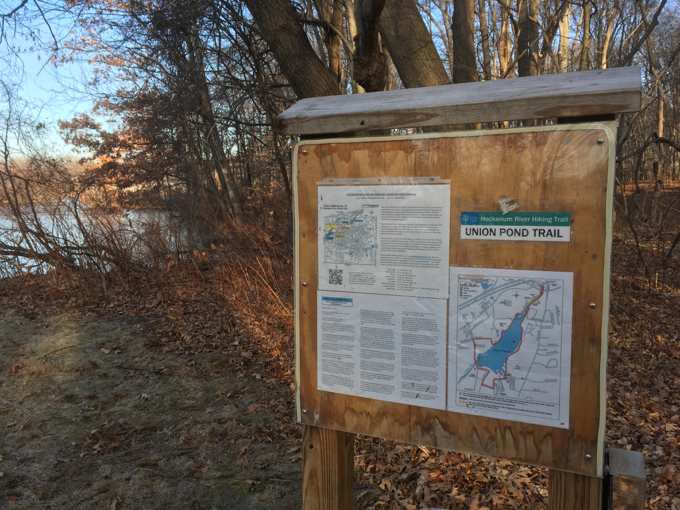 With only two segments of the Hockanum River Trail to complete in Manchester, I think I have a pretty good feel for them now… They are well-maintained, well-marked, weird, and wonderful. 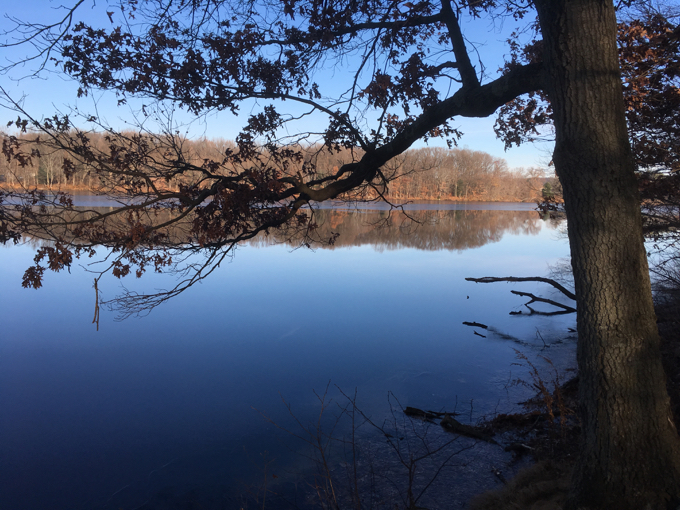 Knowing that, I wasn’t too surprised by the Union Pond Trail despite a healthy dose of “weird.” Ok, maybe not “weird” in the usual sense, but weird in the hiking sense. 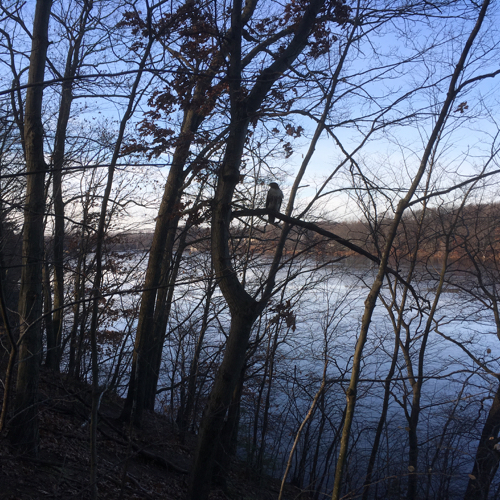 I began the trail at the Union Park lot on School Street and headed around the pond counter-clockwise. I should point out that a portion of the trail is officially closed due to my favorite reason of all:

… due to the deteriorating condition of the buildings, which could rain debris on hikers at any time.

Know before you go. But we’ll get to that later.

The first section of the trail is quite nice. It takes hikers up and down some bumps and past a cemetery and then very close to the Oakland Heights Apartments. 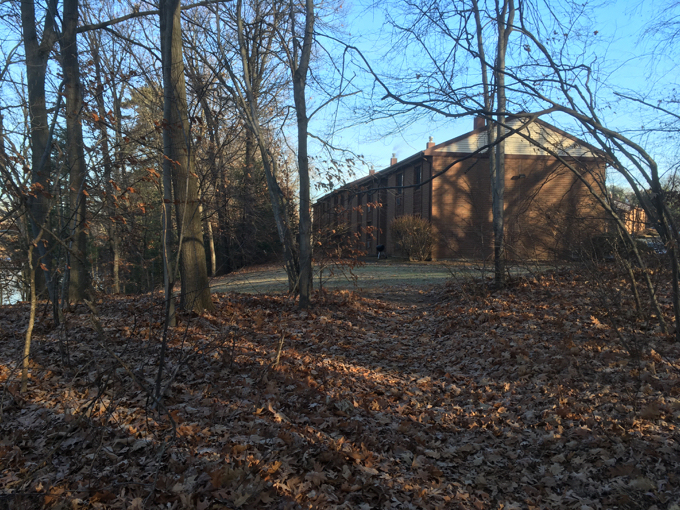 Like, close enough to see people beginning their mornings through their windows. You can see that the trail goes right into their backyard in the above picture.

I told you these trails are bananas. 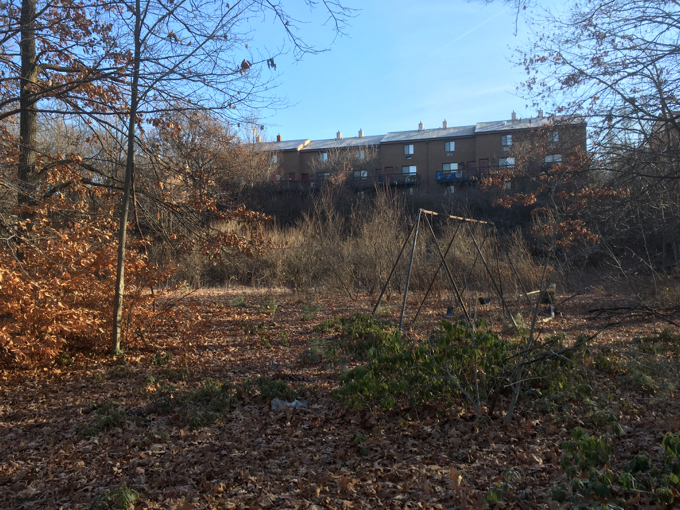 After that uncomfortable passage and some time right along the shore, the trail passes directly behind the Forest Pond Condominiums. Urban trails gotta urban trail, y’know? The condos are further away than the apartments were… I guess they get a smidge more trail privacy for the condo rate. 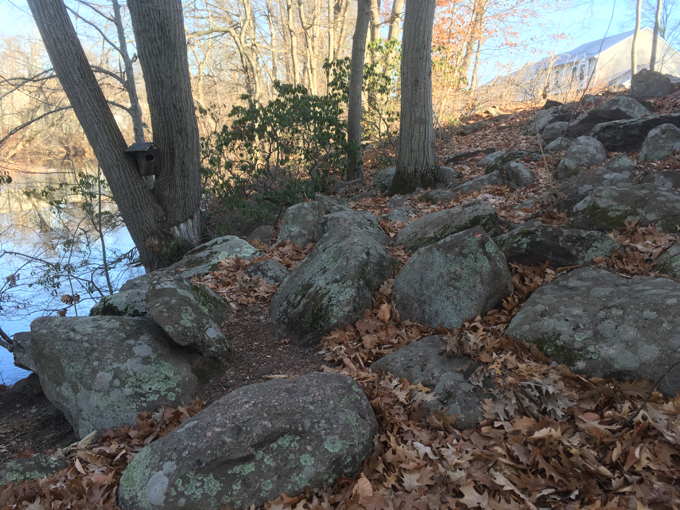 The next mile of the Union Pond Trail is one of the most interesting miles of trail in the entire state.

First, I walked right behind some parking lots for a martial arts studio and a lighting company. There’s an old, mostly destroyed bridge across the Hockanum here that leads over to some crumbling buildings.

I was treated to a series of different types of stepping stones: 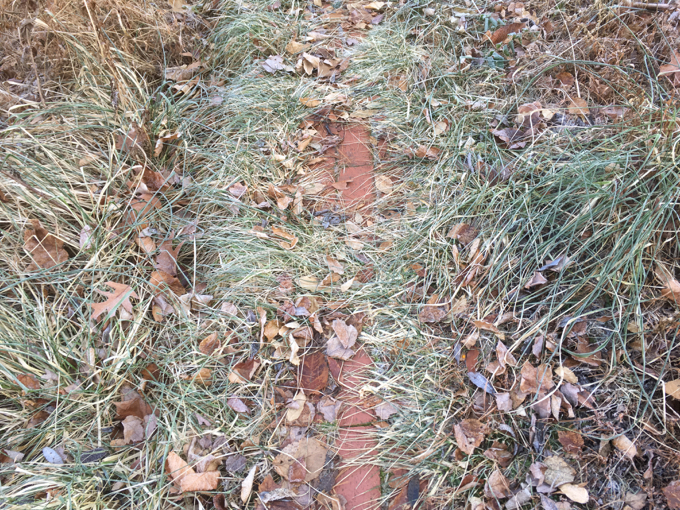 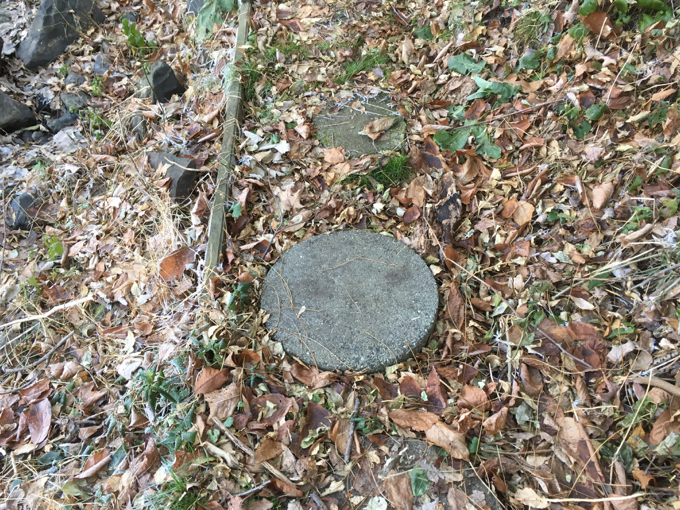 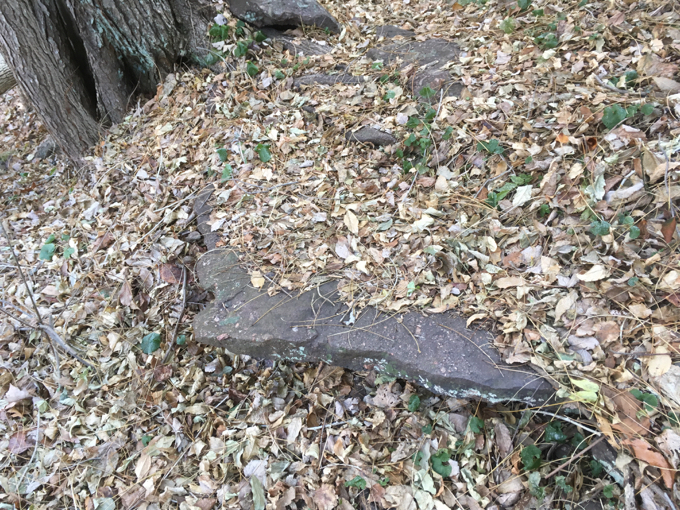 The trail here was fancified for one reason and one reason only: It leads right up to Very Intimate Pleasures – the adult superstore. (And yes, if you hike the entire Hockanum River Trail from East Hartford, you have already hiked through a former nudie bar’s parking lot.) 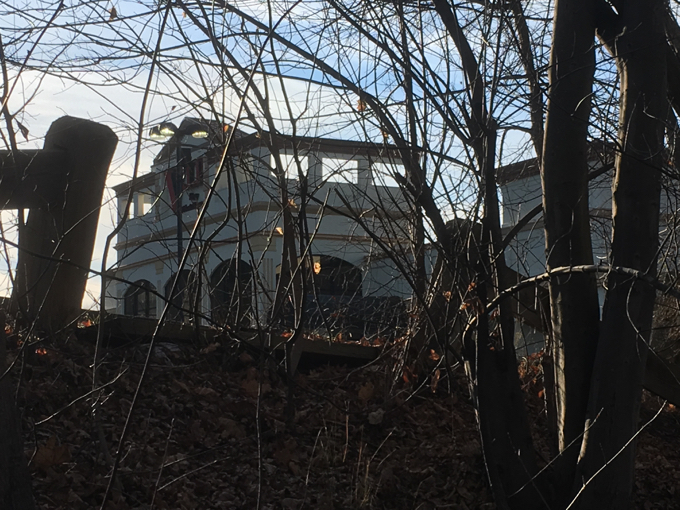 As is often the case along the HRT, this section took me under a large road: 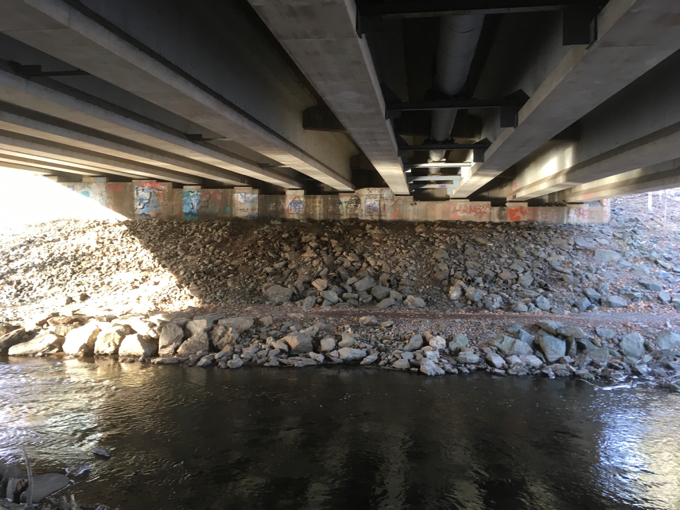 After that, at least in late 2016, I then walked through a construction site. The beauty of the trail here is that it is still blazed, still cleared, and still respected. There’s a whole bunch of construction junk here; piles of this and piles of that. And yet, amazingly, someone has seen to it that the Union Pond Trail remained clear. 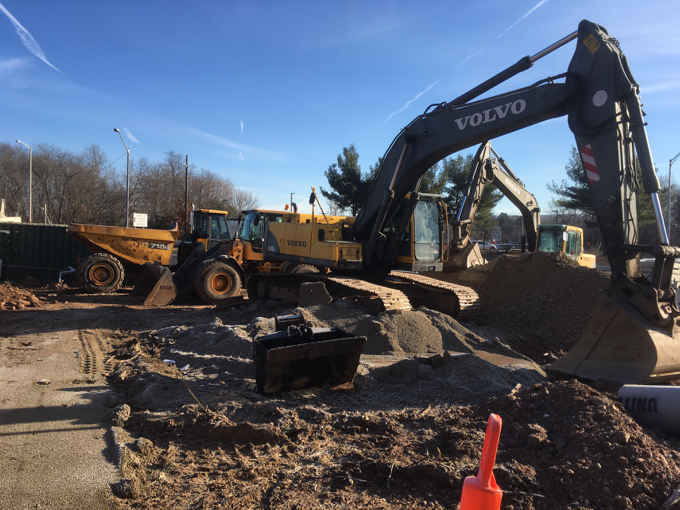 Then there’s this great bridge across the river. 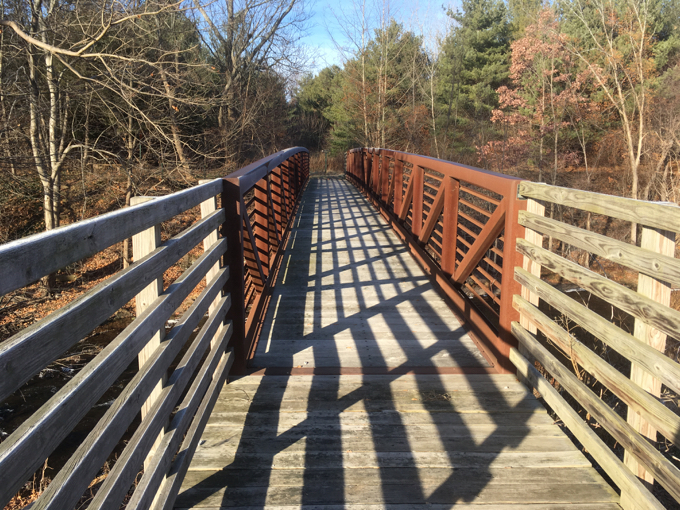 One of the better trail bridges in the state. Right here. Next to a construction site at on I-84 off-ramp across the street from an adult store. It doesn’t get any better than this.

(This messy area is also the southern end of the Oakland Trail.) 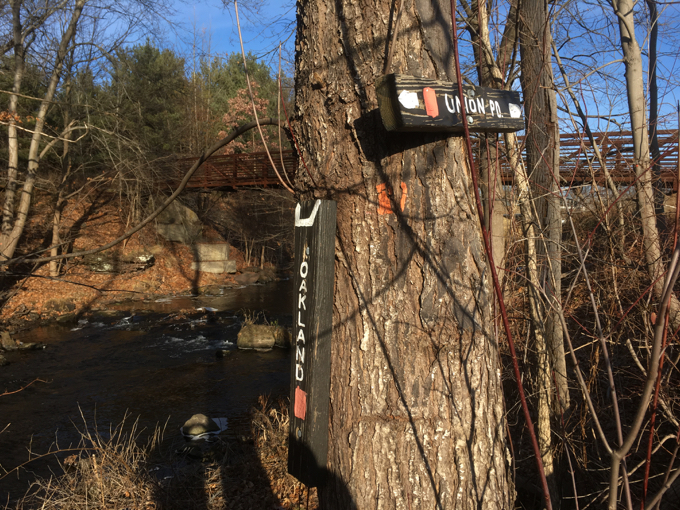 Now on the other side of the Hockanum River and officially heading back towards my car, it was time to wrestle with the moral dilemma. 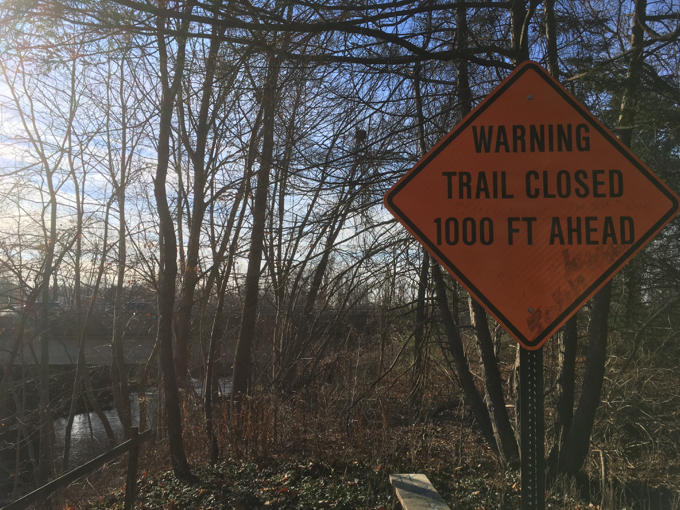 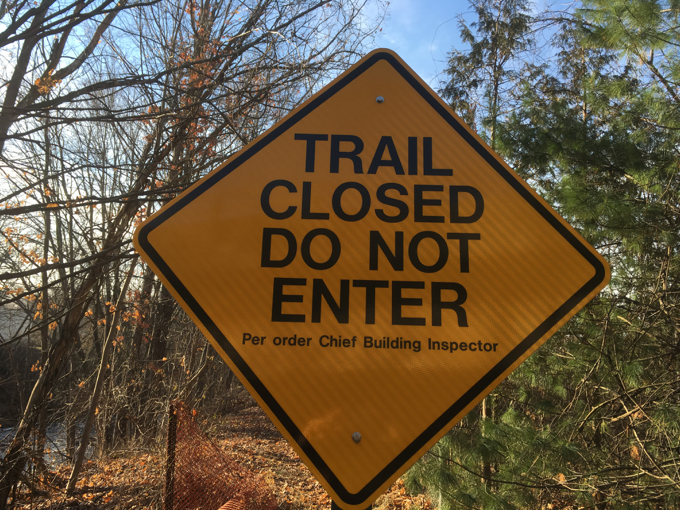 The trail is still cleared and easy to follow here, but as the trail description says, bricks could rain down on my head and kill me at any moment. And there are piles of fallen bricks and debris along the trail as if to prove a point. 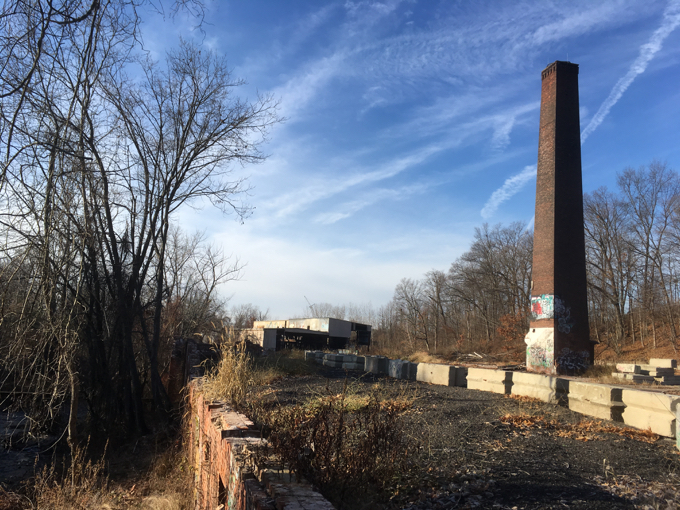 As I continued onward through the closed portion of trail, I thought that dying here would be pretty lame. 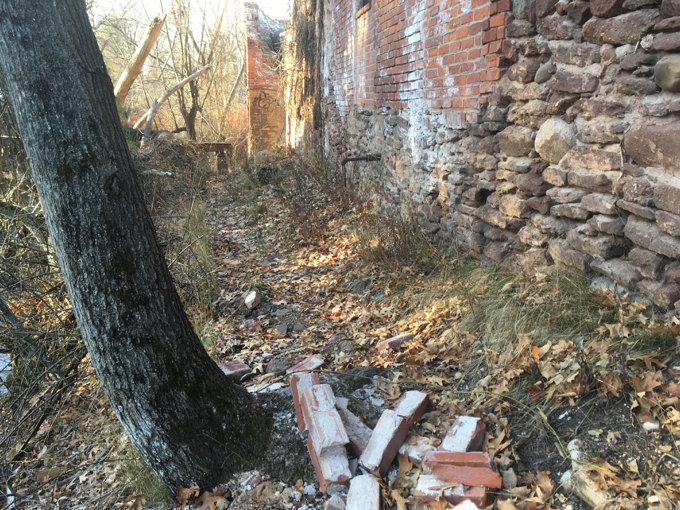 “Such passion for the finer things in life…” 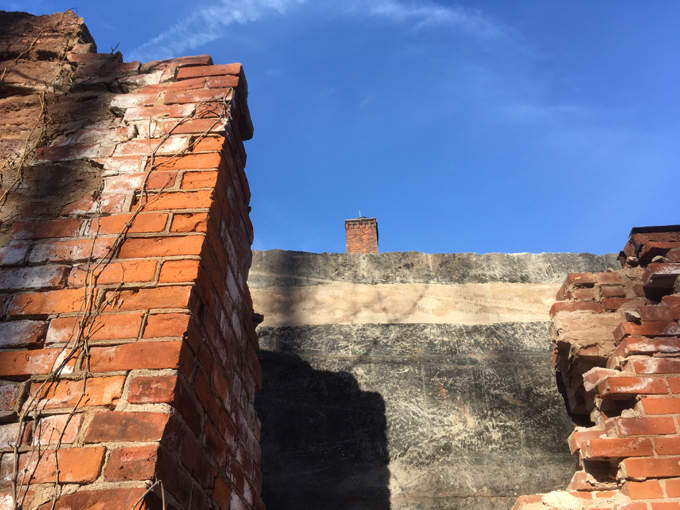 What’s funny is that if I had chosen to hike clockwise, I could have pretended to not know the trail was closed, as the sign is unreadable: 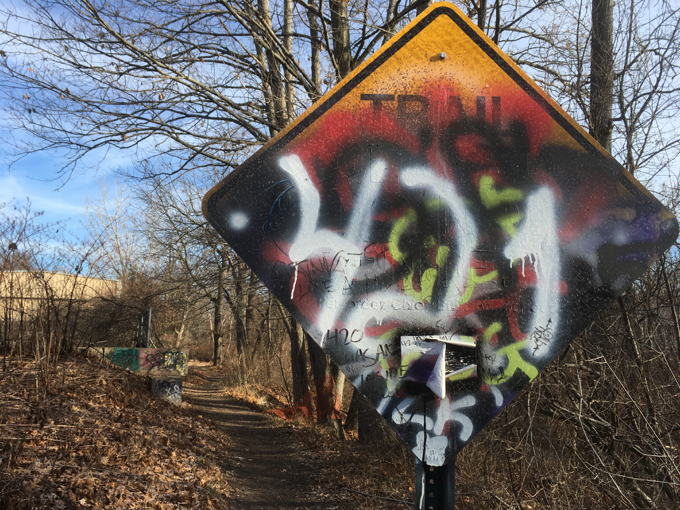 This is not the nicest part of Manchester, but perhaps they’re cleaning it up. I have no idea. Oddly enough, just a few minutes past that mess is Manchester’s quite nice Northwest Park. 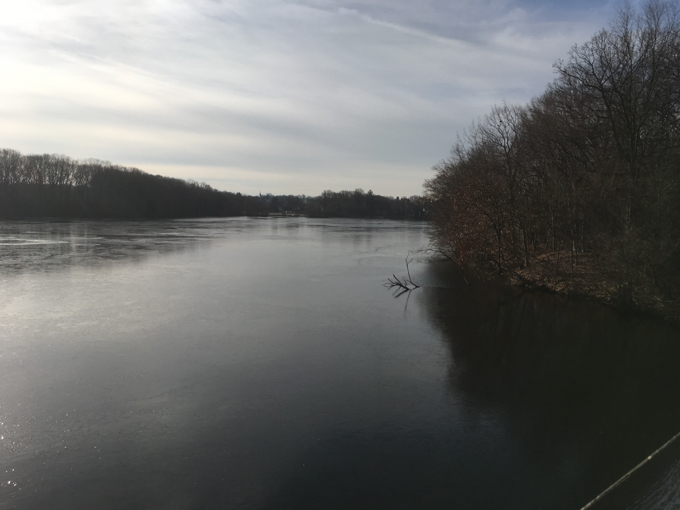 The trail suddenly becomes very pretty; stands of white pine, pacific pondside views… even a lookout deck above the trail. 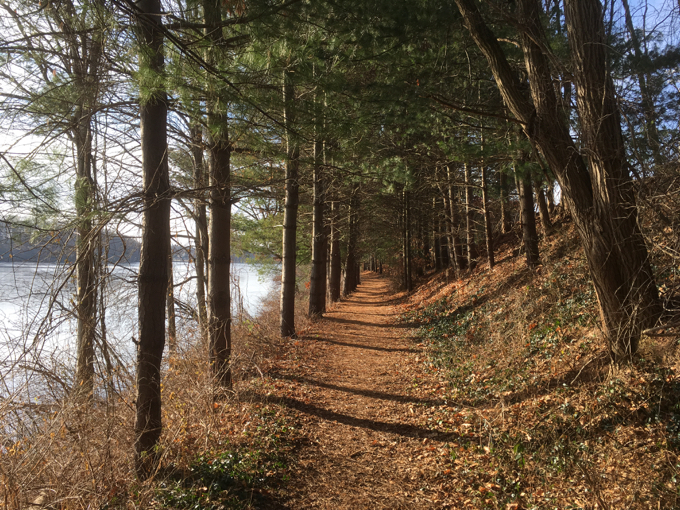 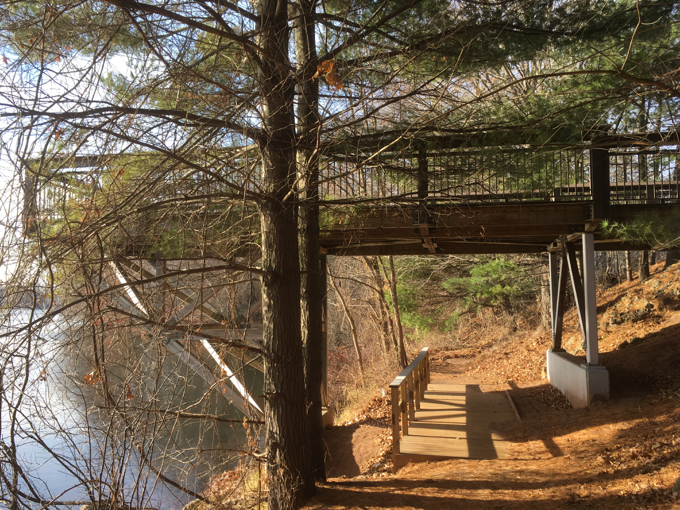 And that’s why I still love these places. The Union Pond Trail has a little bit of everything!

Including a fairly long road walk back to my car. 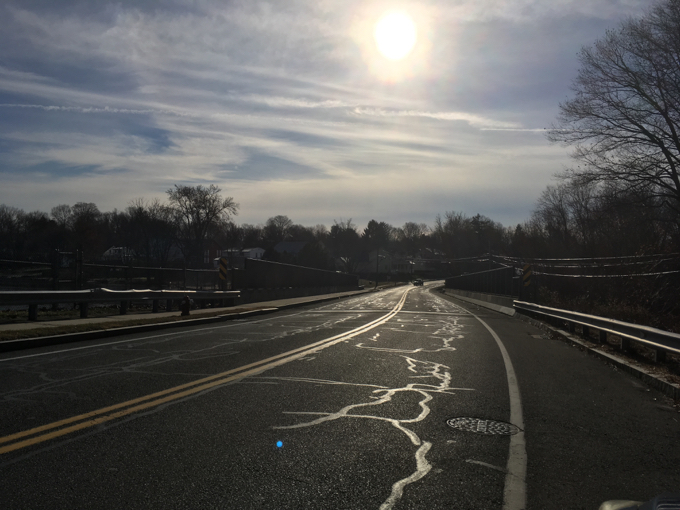 With only one more HRT trail segment in Manchester, I became somewhat wistful as I walked past the Polish church in the middle of the neighborhood. Churchgoers looked at me askance as I bumbled by on the cold winter’s day with a doofy look on my face. 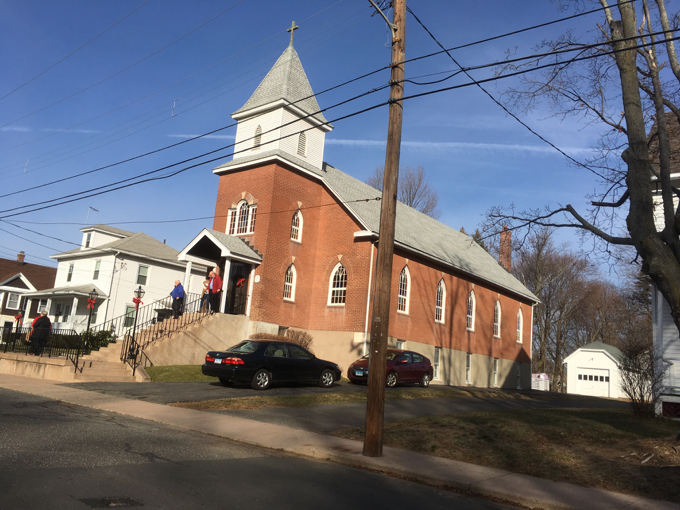 Hey man, how many people have not only hiked all of the HRLPC trails in town, but have also taken the time to write about them?

As imaginary grieving widow Hoang said, “Yeah. What a legacy.” 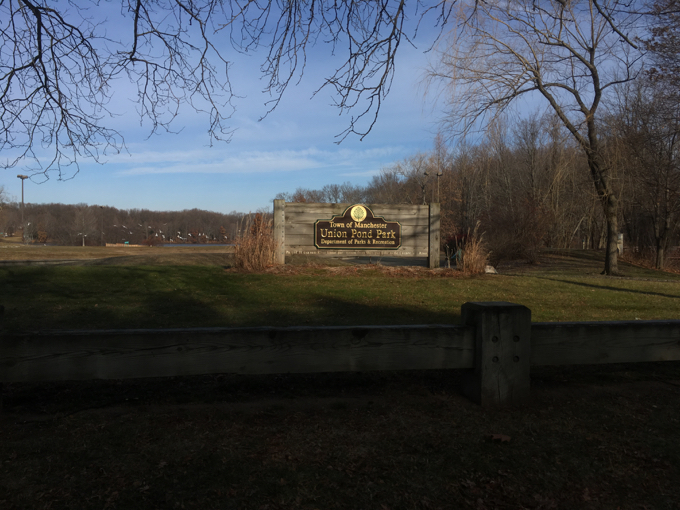 Continue on to Section 17, Oakland Trail