I’m Mulling This One Over
Hogans Cider Mill, Burlington
October 31, 2010

I’m conflicted. You know I love long-lasting local businesses who use local goods. And who wouldn’t love a century-old cider mill on a perfect fall day in north central Connecticut? Apparently, that would be me. 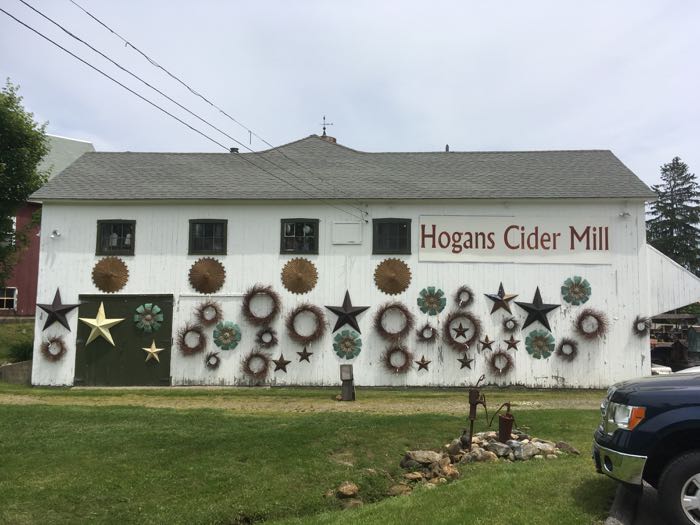 Back when I put together my Connecticut Wine Trail page and then my Connecticut breweries page, I sort of wondered where to put the historic cider mills in the blog hierarchy. There are several and they sort of slot in between being wineries and breweries. (You’ll note I list them along with the breweries, even though Hogans has the word “winery” on the side of the building.) And up to this point, I had really enjoyed them all. 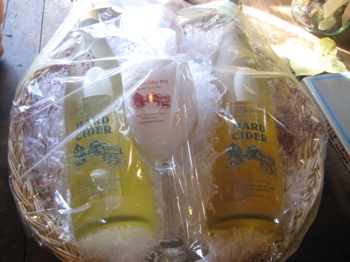 As far as I know, there are only a few places that make wine-like hard cider in Connecticut. And as the years go by, a few carbonated like beer hard cider places will be popping up around the state.

I was rather excited to hit up another purveyor of homemade hard cider in the state – excited enough to ignore the lack of possessive apostrophe in the business name. We parked and on our way into the quaint old barn, some dude with a pumpkin head jumped out from behind a flower stand to scare the ever livin’ crap out of me (Note that it was Halloween). Thank goodness Hoang was messing about with Damian 20 feet behind me, because that would not have gone over too well with my child. Not. At. All.

Anyway, we entered and the main sales floor was abuzz with shoppers. Hogans sells a lot more than just hard (and soft) cider. In fact, it’s 3 floors of… stuff. Lots of knick-knacky stuff that my mom would probably enjoy. Blankets and dolls and needlework and throws and chair cushions and a whole bunch of Christmas related kitsch. Basically, all the stuff Hoang and I usually avoid like the plague. 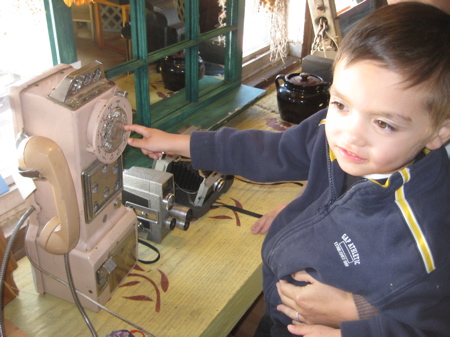 But there were some gems hidden among the country kitchen leftovers. A random old phone! Some books of interest (to me)! And some really cool old photos of Burlington, a town that still revels in its agrarian roots. We wandered back down to the main floor where there was a friendly chocolate lab for Damian and a friendly cider tasting for me. (Hoang was off looking at their historic cider press in action.) 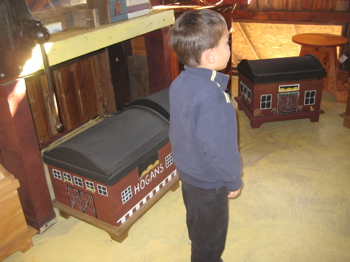 Before I sampled, I reflected on this venerable business…

The Hogan family started the Cider Mill in 1912 when busy Route 4 was just a dusty country road. The Hogan brothers Morris and Richard were a vital part of Burlington life. Their farm put food on the tables of many during the great depression. All through WWI and WWII their dairy herd and farm goods kept the home front sustained. After WWII Morris Hogan served as a a voice for the rural interests of Connecticut as a state representative for twenty two years.

Impressive. And the fact that I was in the original barn made this experience all the cooler.

Okay, let’s get to the New England tradition: Hard cider!

Hogans offers up three varieties. The plain/traditional hard cider which continues a tradition that dates back to 16th century colonial New England. Hogans tells me that the average per capita consumption of hard cider per year in New England in 1750 was 50 gallons. Then there’s the Hogans Honey Hard Cider which “starts with the season’s finest local apples blended and pressed into a heady mixture and aged to perfection. Just before bottling just the right touch of native honey is introduced to create a truly memorable taste experience.” 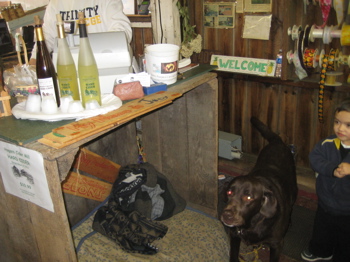 I don’t know what it was, but I really didn’t enjoy either. Maybe because Hogans sticks to old school traditional recipes and the other joints don’t? They tasted very medicinal to me and had a cloying aftertaste that turned me off.

The last variety is Mackie’s Mulled hard cider. This is a “ blend the season’s finest local apples mixed with the right touch of cinnamon, cardamom, rosehips and lemon peel, guaranteed to evoke thoughts of cozy fires and frosted landscapes.” 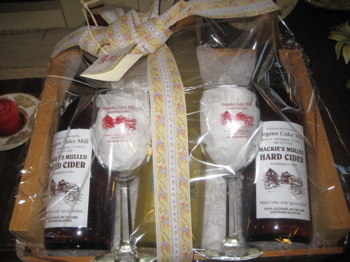 Unfortunately for me, it evoked visions of putting my wallet back in my pocket and hitting the road. I was so bummed out, because I almost always leave these types of places I write about with a purchase. But I’m sorry, none of these varieties appealed to me in the least.

Now, Hoang didn’t try any because she was only a few months pregnant and was being hyper-careful about any alcohol intake. She very well may have loved these ciders, I don’t know. And it’s evident that many people do – just not me.

2018 Update: I revisited Hogans in 2018 and found that they’ve expanded their flavor universe quite a bit. Holy cow, they now offer tons of flavored ciders; all starting from the same two base ciders. 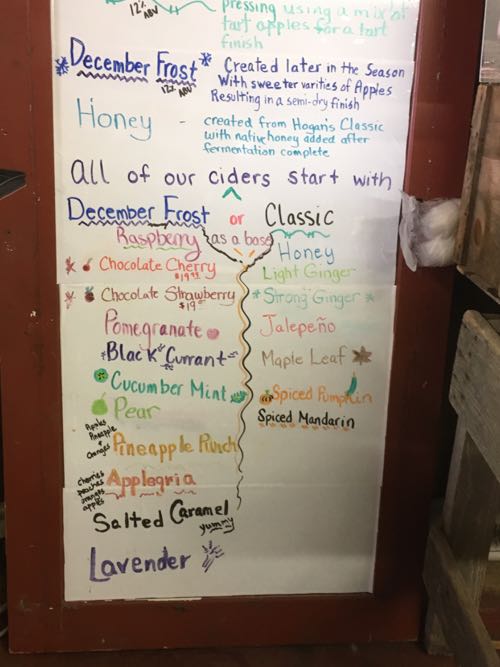 Eight years later, this is still not my thing. Again, I’m sure people come in and lap up “salted caramel cider” and “chocolate cherry cider” and “spiced mandarin cider” but… not me. While poking around, I was offered a tasting and I politely declined.

The purveyor seemed hurt by my denial and pushed a bit more. I assured her I was “all set” and… I felt bad. 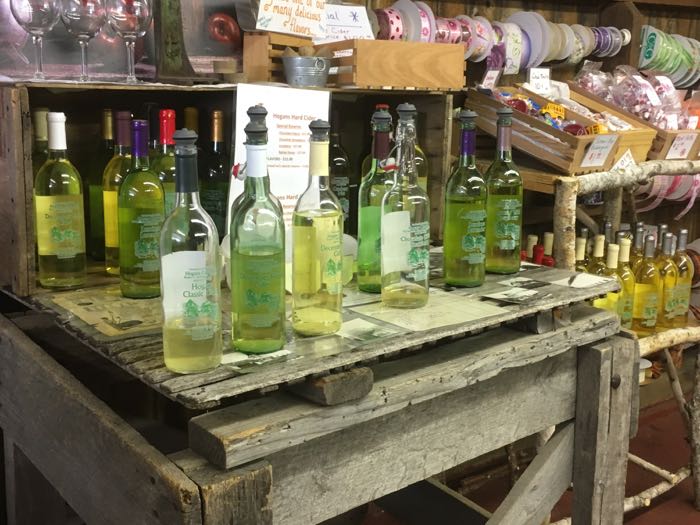 As you can see above, they still retain the country decor and aren’t too keen on sprucing it up. (That’s not to say it isn’t clean – it is! Just that it’s not fancy.) I’m not sure what caused Hogans to move to crazy flavorings (it’s happened to the beer and coffee industry too, of course), and I hope it has increased sales and profits for them.

Maybe you’ll love it! Visit for yourself next fall and let me know. 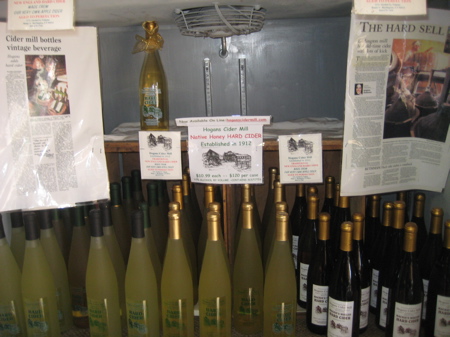