“Soccer is gonna be the next big thing in the US! I swear! For real this time!”

We’ve all been hearing this for decades. It’s never going to happen to the degree some people wish, but at least a legitimate professional soccer league has been fairly successful now for quite some time. And some MLS franchises in some cities have been doing incredibly well. 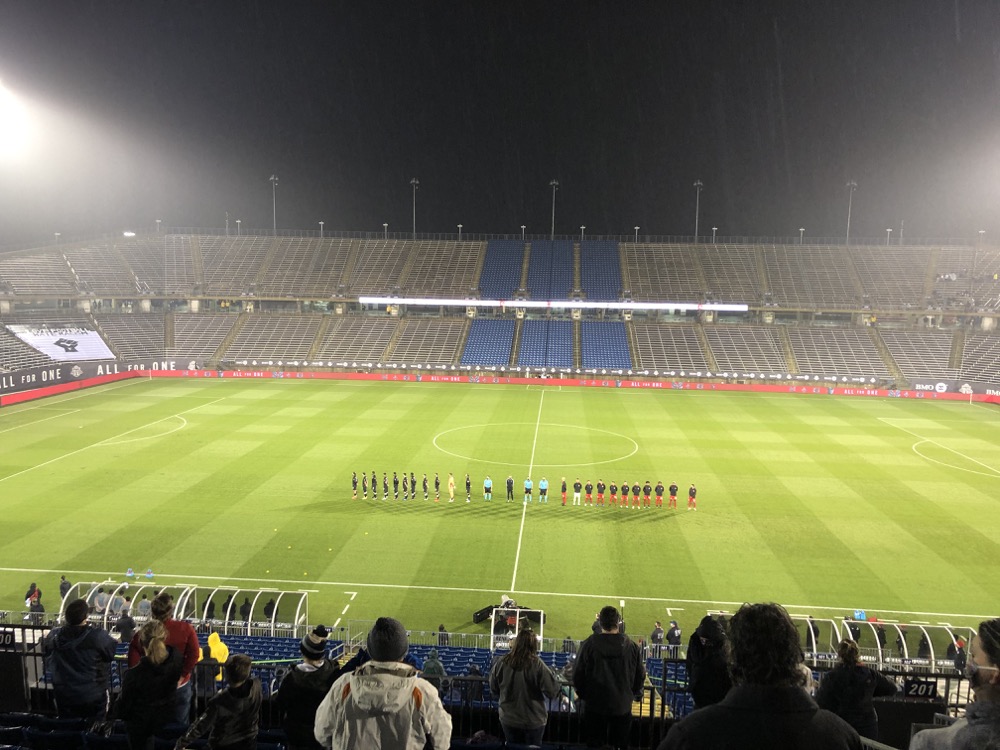 Columbus, Seattle, Portland, Atlanta… to name a few. A key piece is to build a soccer-only stadium. Which takes money – which soccer generally doesn’t have. If you’re an elite men’s soccer player, you ship off to Europe in your teens and never think about playing in the MLS until you’re a few years short of retirement.

The US Men’s National Team starting 11 at next year’s World Cup* will consist of 11 players currently earning a living in Europe. Heck, the team’s top players are not only European top-league professionals, they’re under 23. 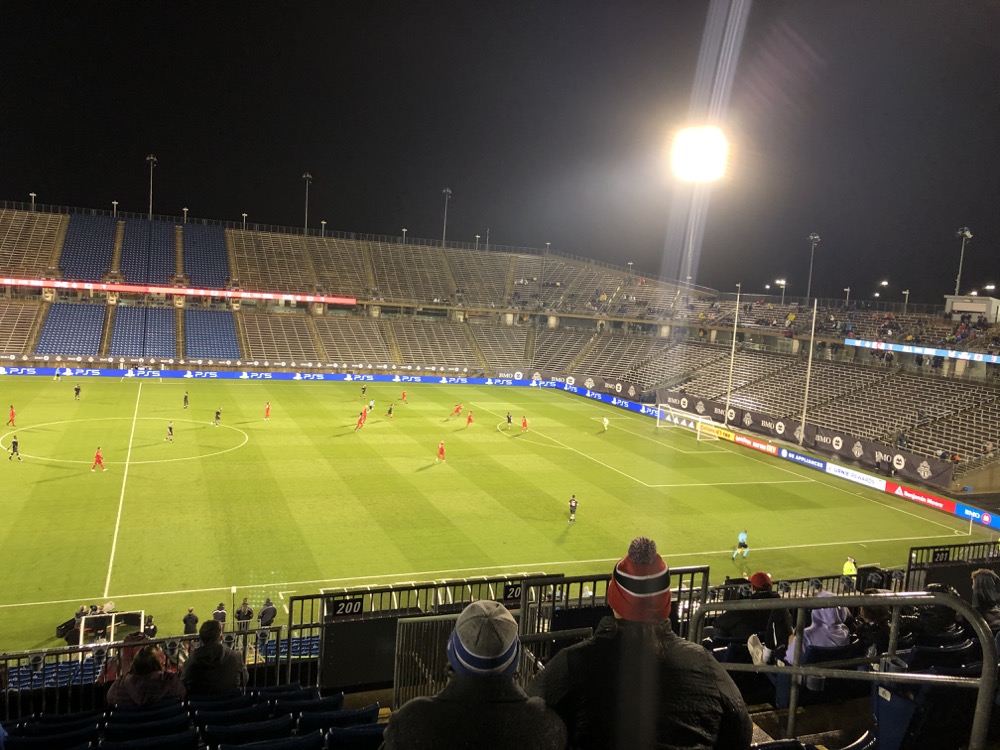 *Okay, there may be one or two MLS players and assuming they make the finals in 2022 is a slight leap on my part. But they are young and hungry and after 2018’s embarrassing failure, I expect them to do so. Of course, the pandemic is playing havoc with all of this.

And it played havoc with the 2020 MLS season. So much so that the Canadian teams had to find “homefields” in the US because they weren’t allowed to cross the border. One such team was Toronto FC who wound up playing at Rentschler Field for their “home” games for the 2020 season. And those games were played with no fans.

Except for one late season tilt with Miami CF. 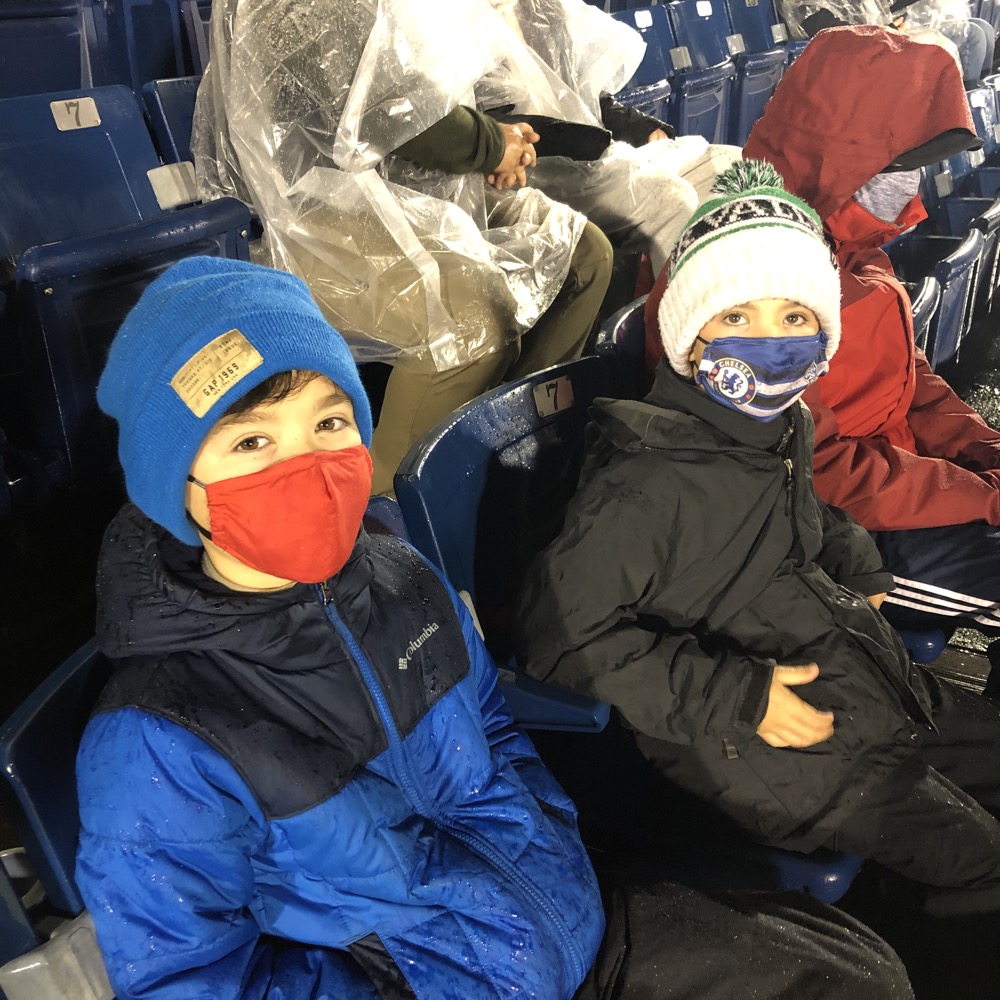 MLS is coming to East Hartford! First place Toronto FC returns to their home away from home to take on Inter Miami CF right here in Connecticut! On November 1st, witness world class soccer as these star studded sides battle it out at Pratt & Whitney Stadium at Rentschler Field at 7:30 PM. Don’t miss all the action and lets show Toronto that we too are, ALL FOR ONE.

“We look forward to having some fans in the stands for our final regular season game in East Hartford,” said Toronto FC President Bill Manning. “Our players feel the support already and having some fans will make it even better.” 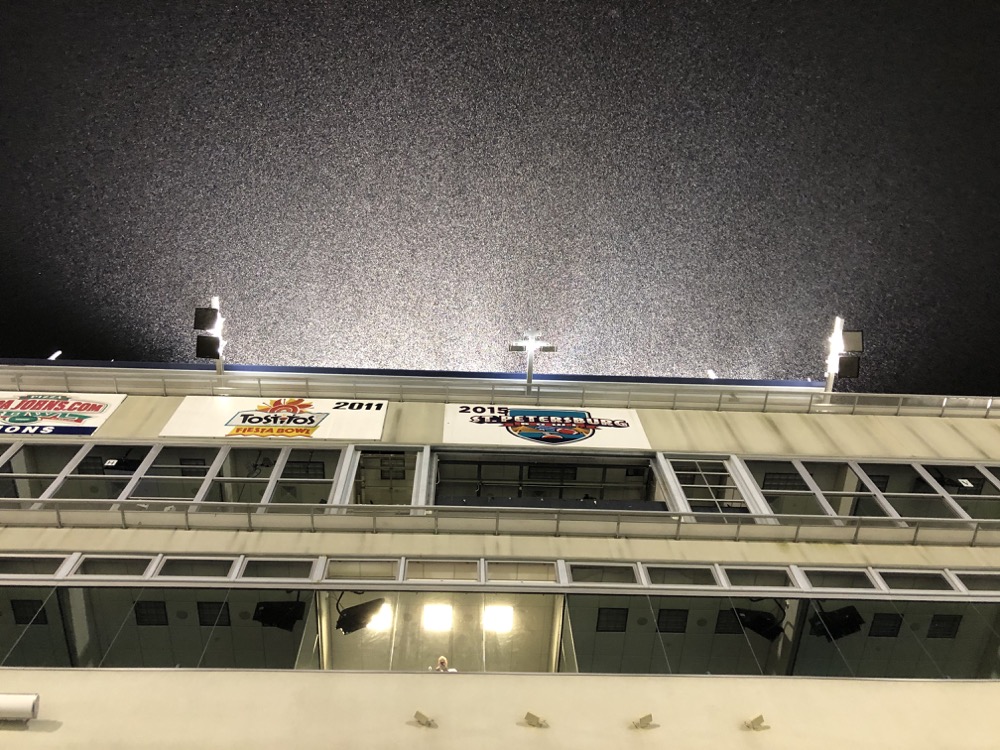 Yeah. No one could have known what the weather would be like on November 1st in East Hartford. Sales were pandemic capped at 5,000 tickets and I have no idea how many were actually sold. I mean… two teams no one around here knows or cares about playing soccer during a pandemic?

At least Toronto was in first place at the time and featured Michael Bradley, the favored whipping boy of the US national team. And I have a soccer mad son with soccer mad friend and I’m friends with his dad and there we were, checking weather reports and layering up with every warm piece of clothing we could find. 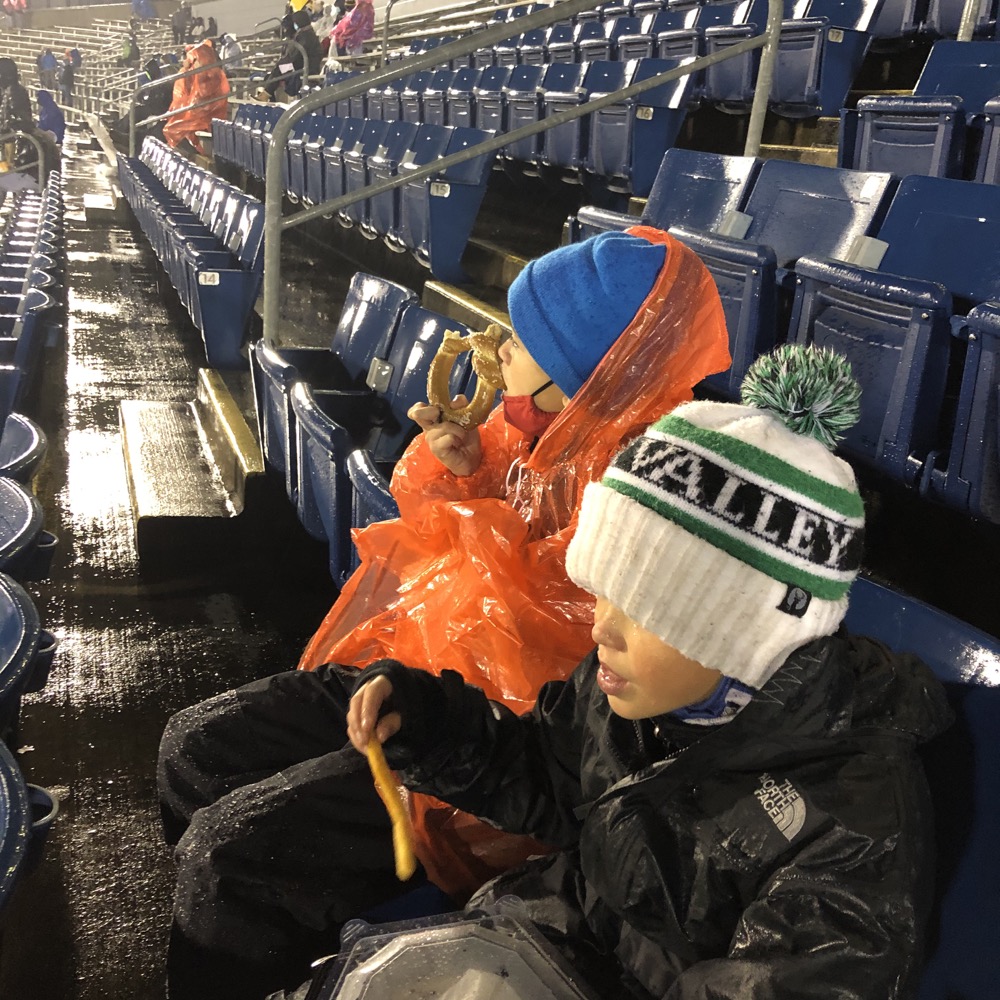 Game time temp: 40 degrees. Whipping gusts up to 50 mph. Oh, and 100% chance of downpour. Sigh. Calvin grumbled as I layered him up but listen kid, I know what I’m doing.

No one showed up for the game. There were maybe 1,000 at kick-off. And the first half wasn’t too bad. Some light rain and a bit chilly, but not awful. Calvin and his buddy Owen were into it, got some digs in on Michael Bradley as expected, and were enjoying themselves. Yes, this is the same friend who joined us in much better conditions a couple months prior at a Hartford Athletic game.

(The Athletic play in a league a rung or two below the MLS.)

Then halftime came and… wow. Apocalyptic isn’t a strong enough word. The front came through as promised and winds tore through the Rent. Blinding rain came down is sideways sheets. Everyone left.

When I say everyone left, I mean everyone. The “crowd” of 1,000 dwindled rapidly to about 100. Left watching two teams play that no one in attendance cared about.

Except two little boys and their ding-dong dads. Boys being boys, Calvin argued that he didn’t need to don the plastic poncho I’d brought simply because it wasn’t cool. Dude. It’s pouring. I’d brought two so I put one one as well which was the only way Calvin would do the same. (Not that he really had a choice, but I’m cool like that.)

Yeah, vertical video. Deal with it. This video cracks me up though – just unhappily eating their unappetizing cold stadium pretzels during a maelstrom.

It was miserable. I’ve done a lot of things in terrible weather in my life – notably stuck it out at the Whale Bowl in sub-zero wind chills at this very same stadium. That game went to overtime and a shoot-out. We agreed we’d not be staying for the same with nine-year-olds, should it come to that. 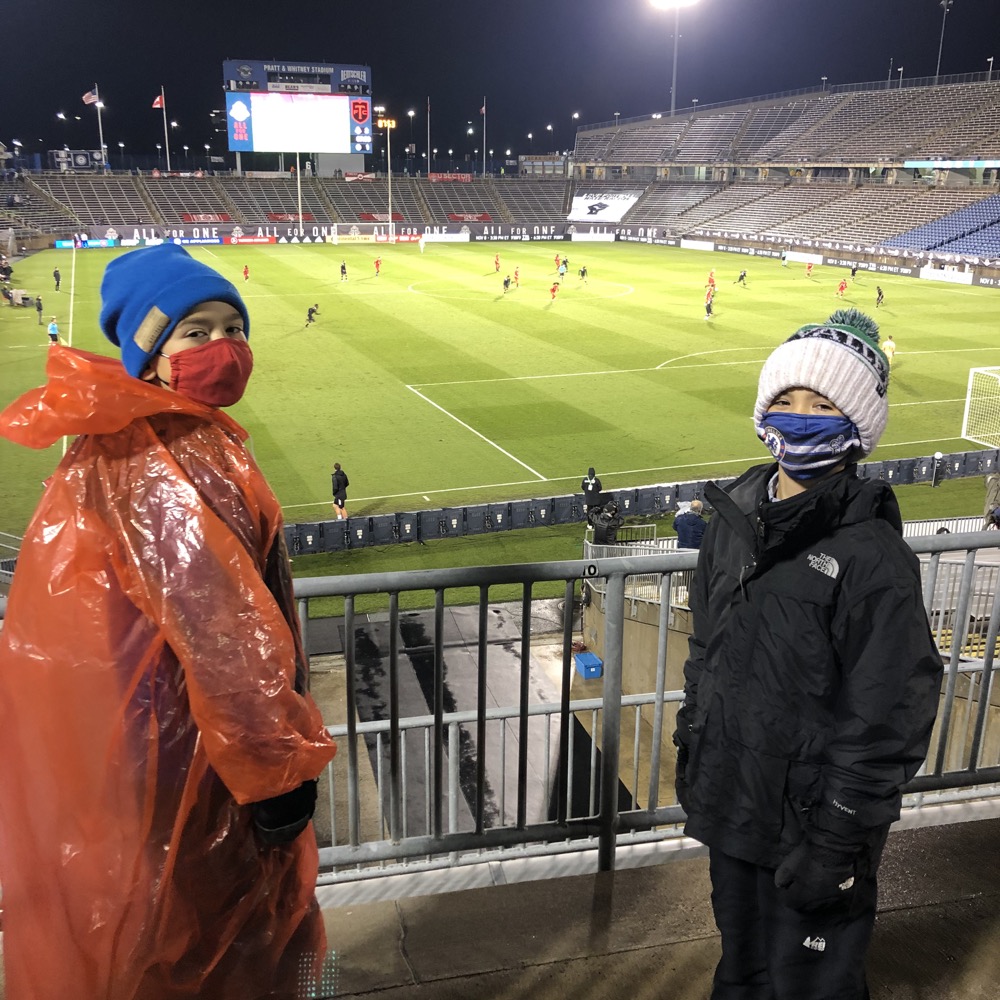 Fortunately it did not come to that, and the “home team” Toronto won 2-1. But we did stay to the bitter end. Calvin and Owen now had a story of an epic event for the rest of their lives! I had a more interesting story to tell on this website about the one time fans could see a regular season MLS game in East Hartford!

And no one got hypothermia (or COVID-19 for that matter.) Hooray for us all. And looking back now, neither the frigid hockey game nor the drenching cold soccer game were as miserable as watching UConn football at The Rent in perfect weather. Zing! 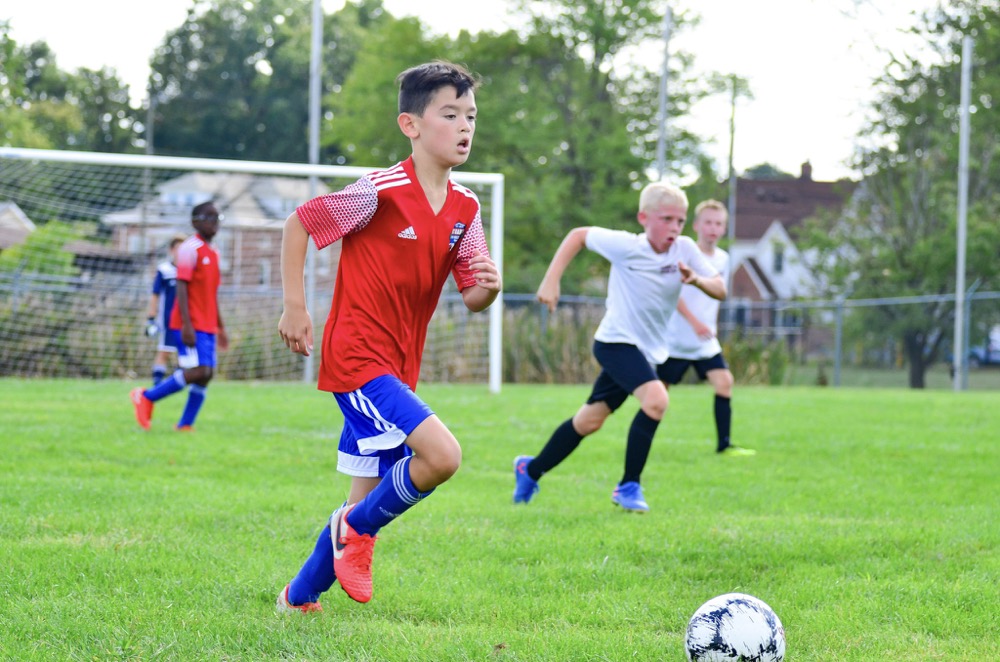