Has it really been almost a year since our last Metacomet section hike? Yes. But I don’t care. This day may have been the first opportunity to hike with Hoang in that intervening 11 months! And I’m glad we took it. 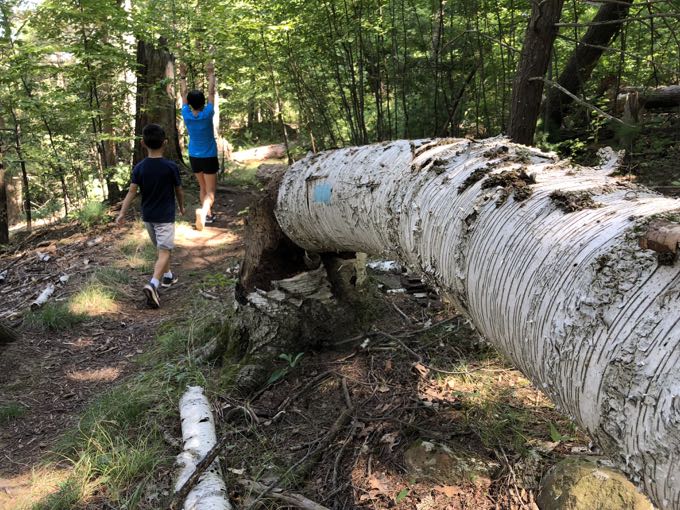 [Some history: In April of 2007, when Damian was 1, I began the Metacomet with Hoang. CTMQ was just 7 months old itself. We decided that we’d complete the Metacomet together. After the hike you’re reading about on this page, there are only 7 miles to go in Connecticut. Re-routes, major upgrade to National Scenic Trail status, extension down to Long Island Sound… a lot has happened in the time since we began hiking this 63-mile trail in our backyard!]

Like, we had another son. And Damian was diagnosed with Smith-Magenis Syndrome. We both worked at Aetna back then. Neither of us do now. et cetera. 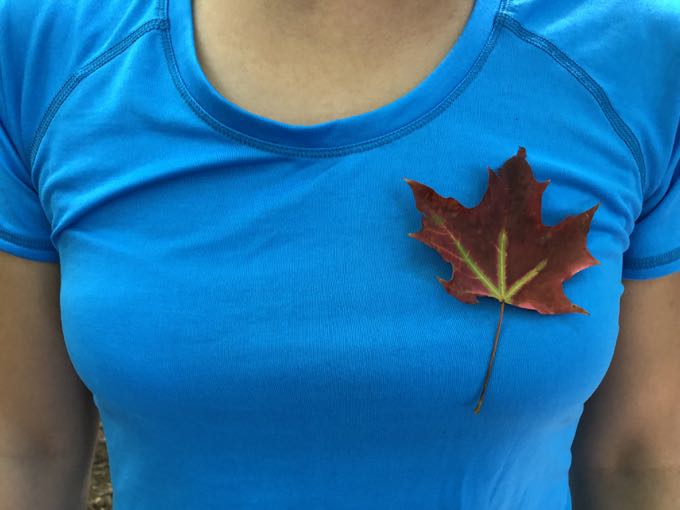 Another autumn is just around the corner!

If you read this site at all, you’ve probably stumbled on a hike page with Damian. He presents some rather difficult challenges on the trail. But today! Today we had the exceedingly rare opportunity to hike with Calvin while Damian was being cared for.

I’m not sure we’ve ever hiked in this family formation before. 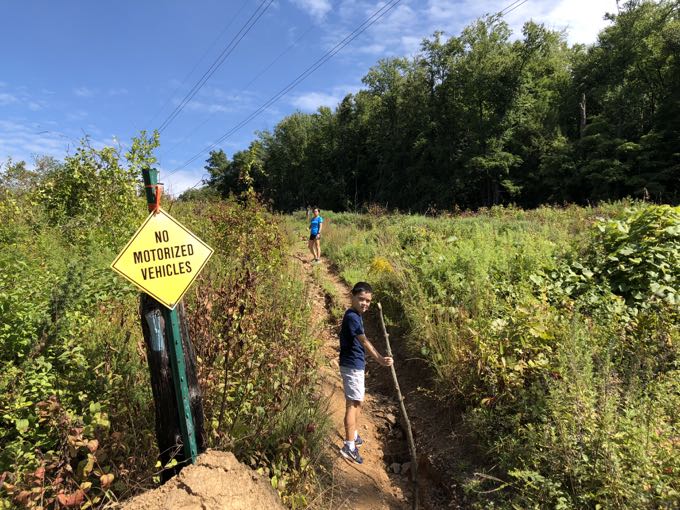 This “section” is incredibly short and downright easy. I had planned it thinking Damian would be with us, sure, but also to take down two more miles of the Metacomet; meaning that our final hike would be two miles shorter. Whenever that happens.

From Hatchett Hill Road, we climbed Hatchett Hill. This begins with a steep little slog up a powerline cut, before turning off into the woods. Hoang got a cut on her ankle from a thorn within one minute of leaving the car. 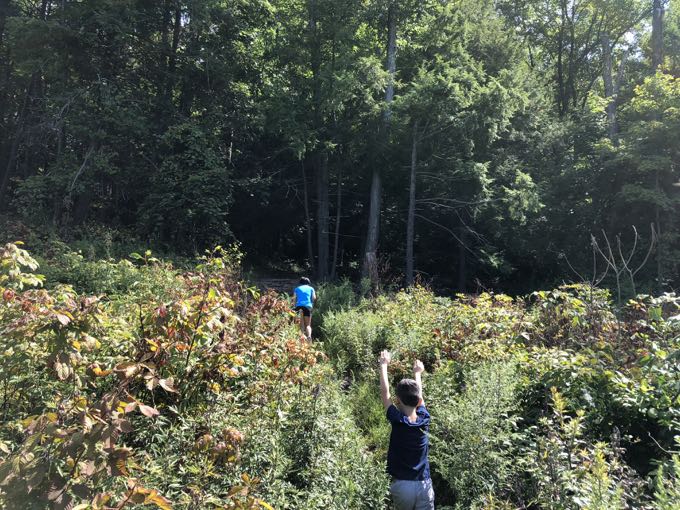 Undeterred, Hoang and Calvin began trail running. With glee. What was happening? If I had known this, I’d have signed them up for the full 9 miles to the Massachusetts border! 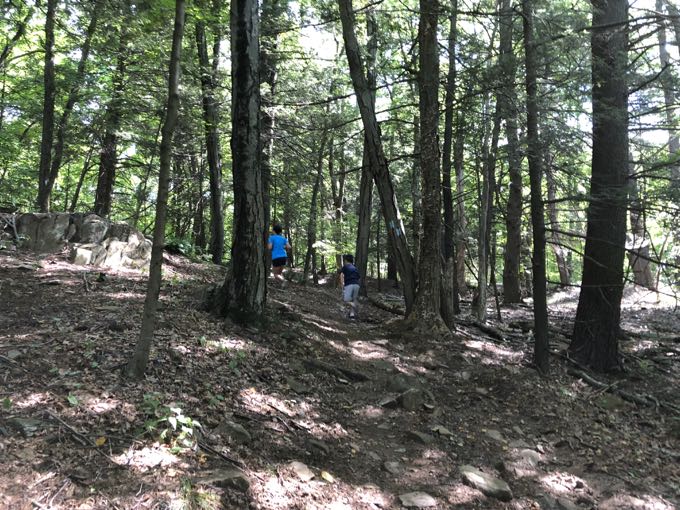 Here’s the thing. These two (Calvin and Hoang) are best friends. This is usually an awesome thing, except when it’s not. They have the same personality, the same independence, and the same stubbornness. So when they argue, hoo boy, it’s ugly. 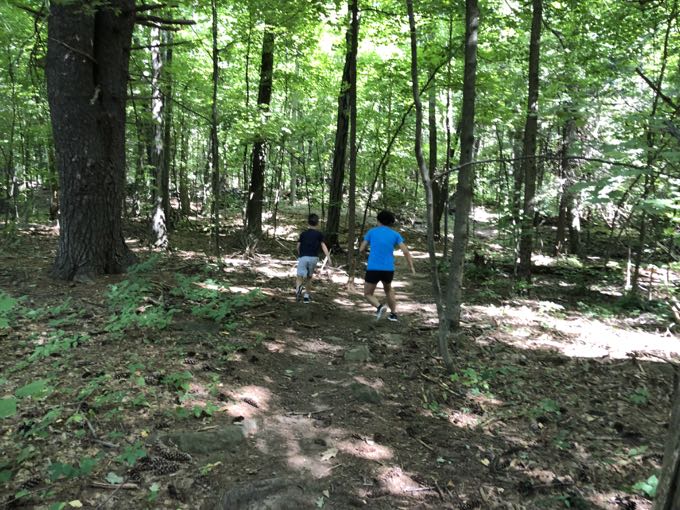 They also have the same goofiness. Oh, and they love to make fun of me together. Lots of this dynamic is sort of hard to explain, but I think some of the pictures will help.

But early on our hike we ran into a sobering scene. A tiny little cemetery in the woods along a stone wall. 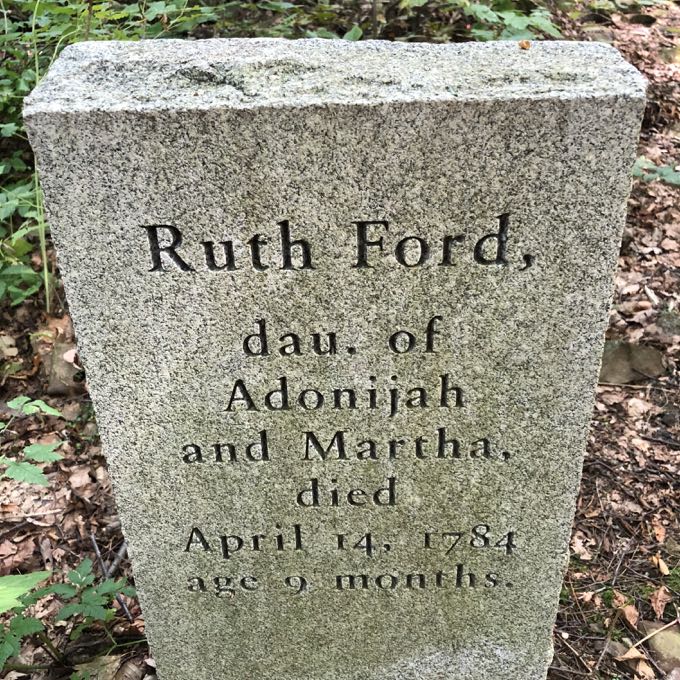 This was a bit disorienting, but we figured it out fairly quickly. The brand new headstones belie the fact that the deceased family died centuries ago. This is a restored smallpox cemetery that a historian worked on for several years. This Courant article is from 1997, though I’ve changed the dates and timeframes to make it read better today: 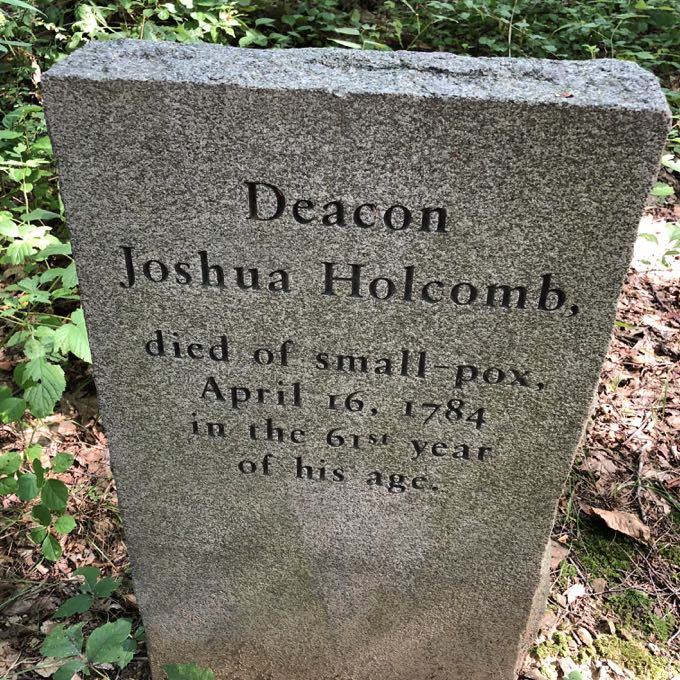 A retired Suffield High School history teacher, local historian and genealogist, Tom Howard replicated the headstones and restored the smallpox cemetery to the way it stood in the late 1700s: when the land, now dominated by evergreens and broken tree limbs, was a cow pasture. He has been intrigued with the stories about the cemetery since fellow historians told him of it more than 40 years ago.

What he has learned from his research and visits to the Bloomfield home now owned by Carol and William Teasdale is that Deacon Joshua Holcomb is buried on the crest of Hatchet Hill a few feet east of the Metacomet trail. His headstone attests to his death from smallpox on April 16, 1784, two days after his 10- month-old granddaughter, Ruth Ford, buried a few feet away. Though Ruth’s cause of death isn’t noted, Howard surmises that the smallpox epidemic raging at that time claimed both their lives.

Also in the graveyard are the bodies of Ruth’s cousins, 2-year-old Caleb Holcomb, who died on April 6, 1788, and his 1-year-old twin sisters Amarilla and Boadica who died in March 1793. Caleb and his sisters shared one headstone. 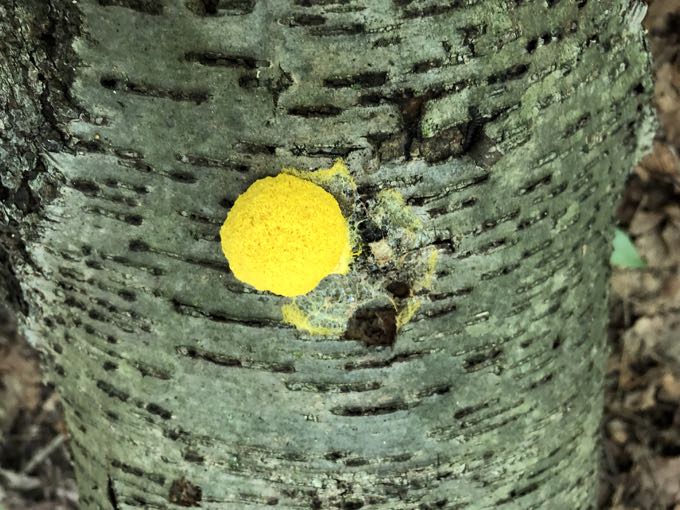 Well that’s fun. At some point in the first half of the 20th century, the original headstones disappeared. Apparently some Bloomfield guy liked to collect such things, and back then it wasn’t the worst thing in the world to “collect” historic headstones.

Calvin paid his respects and then it was back to the trail.

The few views along the ridge here were obscured by the late summer vegetation. That’s okay; if we’d been hiking this “normally,” we’d have seen a million views from Bloomfield northward… and I believe there are plenty more as we head into Suffield on our next outing. 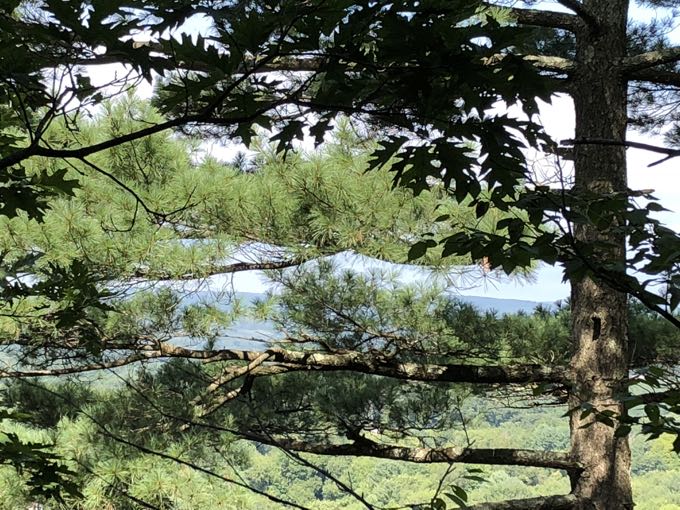 Calvin found another (probable) gravesite off the trail in the woods for a Charles Julian Kaiser who died in 1952. I don’t think it was smallpox then, but I know nothing more either.

The Metacomet follows the ridgeline here, as it so often does. A few side trails split off here and there, but the blazing is sufficient. Here is one of the more amazing things about this section: 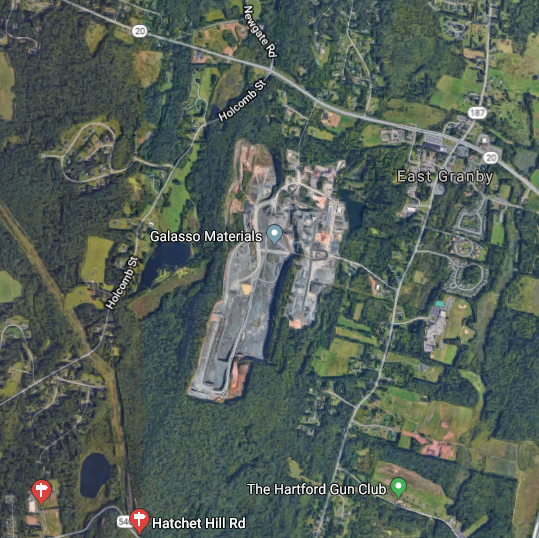 That giant gray scar on the map here is a quarry owned by Galasso Materials. Galasso is sure to tell us at the trailheads that the land is owned by them. So… thanks. I guess. Sure. Thanks. Their website shows the quarry in action. 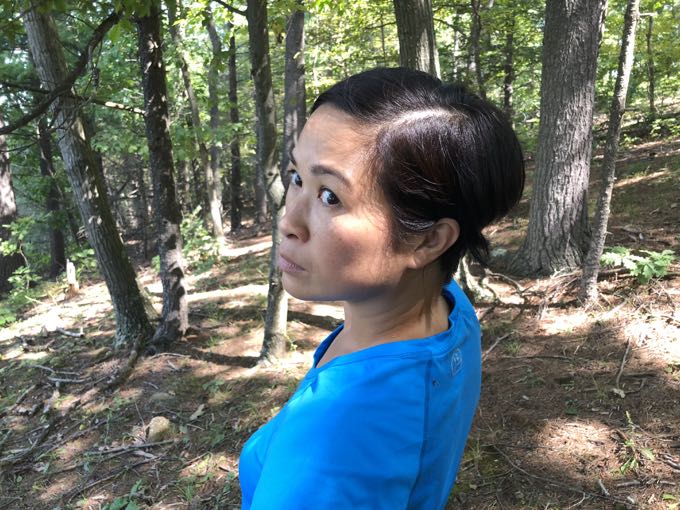 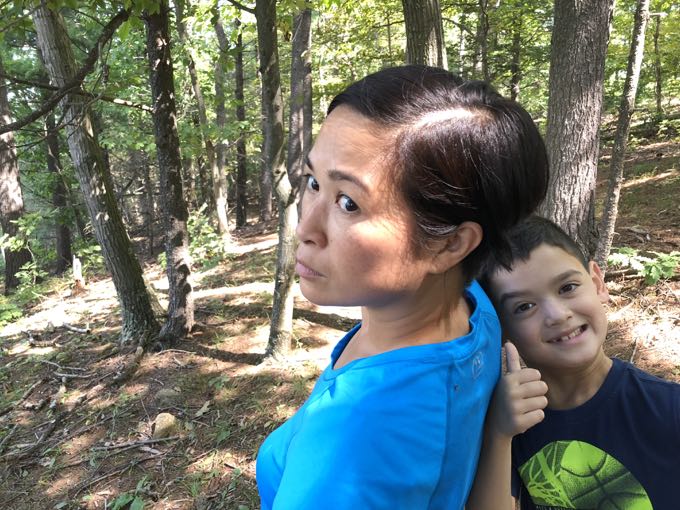 Anyway, in the late summer anyway, you can barely see the quarry. Which is amazing, considering it’s nearly a mile long and literally right next to the trail, which squeezes in that strip of green between it and the housing. I’m sure it’s far more noticeable in the winter, but it’s still a miracle of trail routing.

You can hear it when the trucks are driving around, but that may be drowned out by the gun range shooting at the Hartford Gun Club which is nearby as well. Such is hiking in central Connecticut. 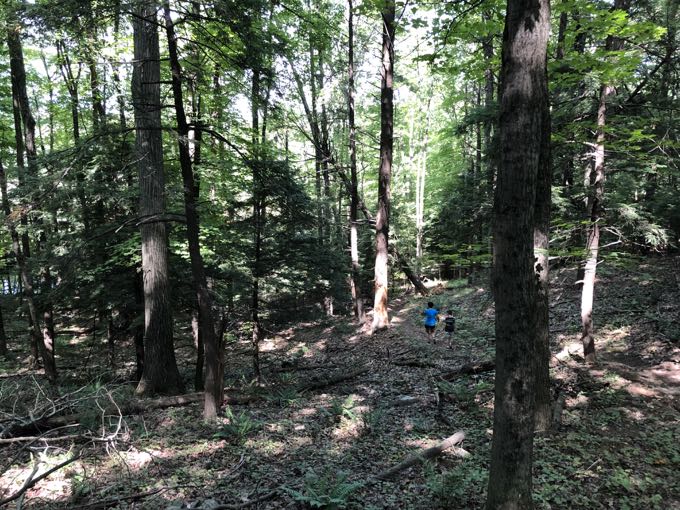 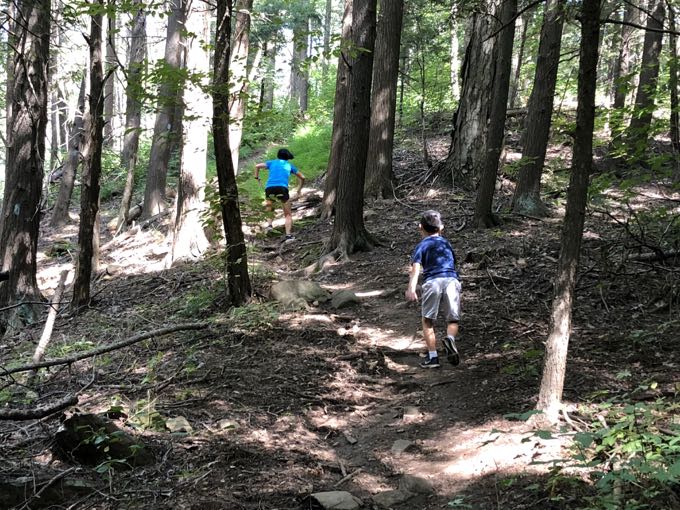 There is a sharp descent and then ascent up to a massive white oak. A true wolf tree for sure. I’m glad that trails like the Metacomet often try to take hikers past things like that that would otherwise be hidden in the woods.

It’s a beautiful tree and in some ways, is the highlight of this section. 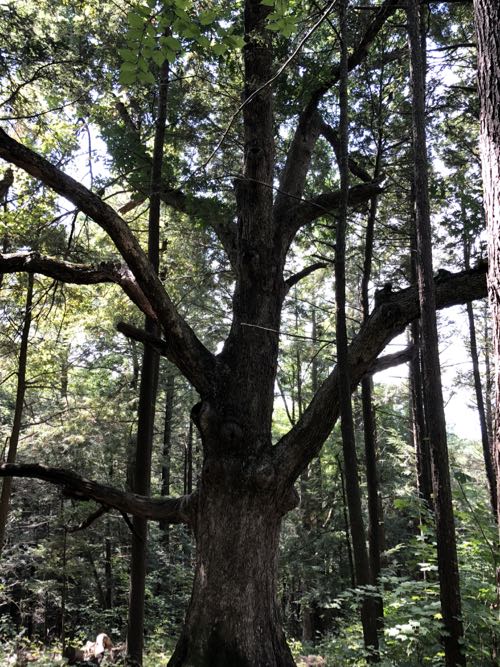 Just before a final very steep descent off the ridge, Calvin found a puffball. Longtime fans of Calvin may remember his “forting mushrooms” video from a hike in Burlington in 2015. A true classic.

This was quite the puffing mushroom! 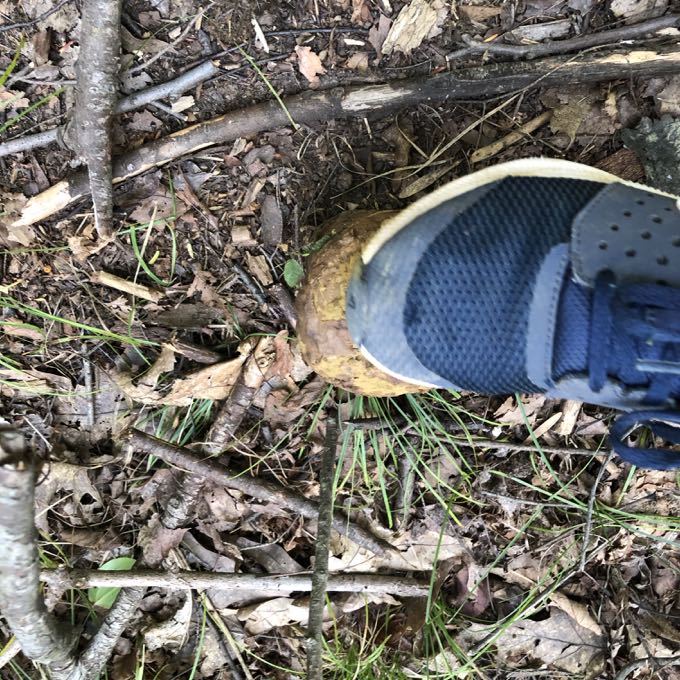 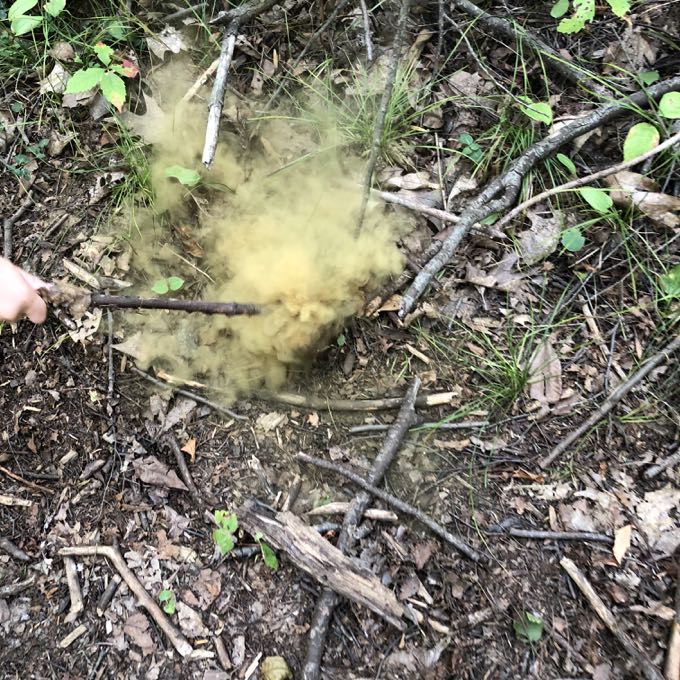 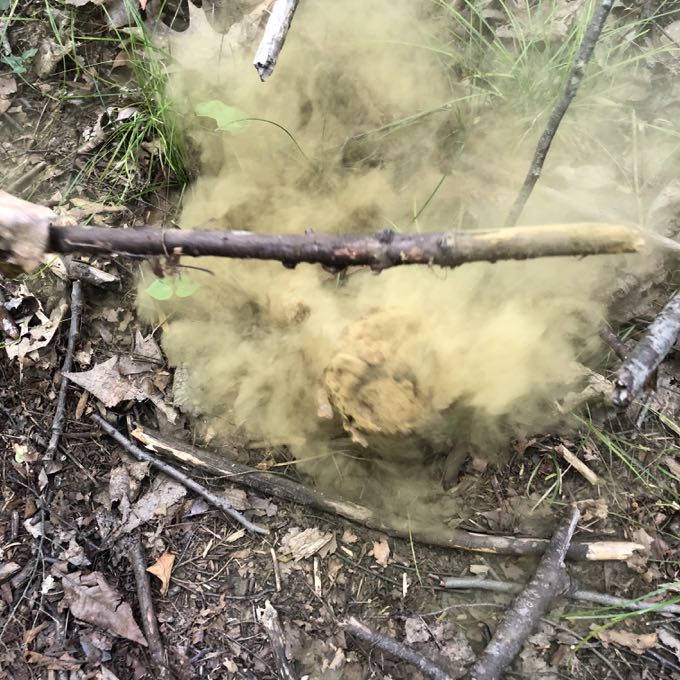 Down the hill and out to the road and up to our car. And we were done! Hoang called this “the easiest hike ever” and Calvin lamented its end. I did too, but I hadn’t planned on all of the running and general merriment.

I loved hiking with these two. The miles, few as they were, flew by. I had the vision in my head of completing the trail with only my wife, but now I’m thinking that maybe Calvin should join us. We’ll see. 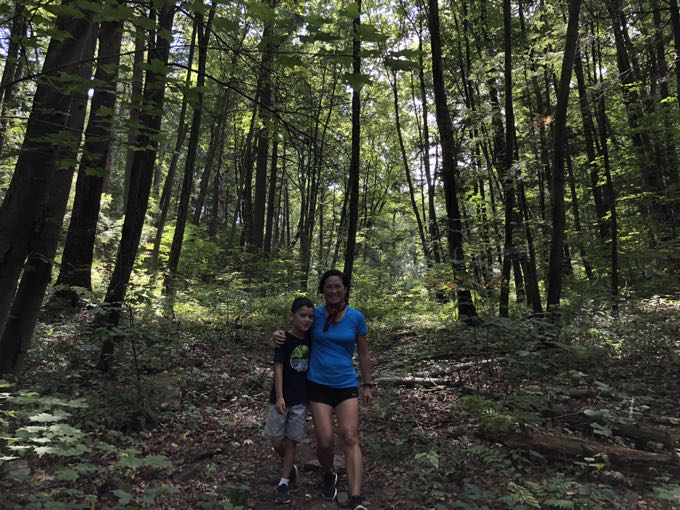 It’s always nice when people look like this upon finishing a hike! 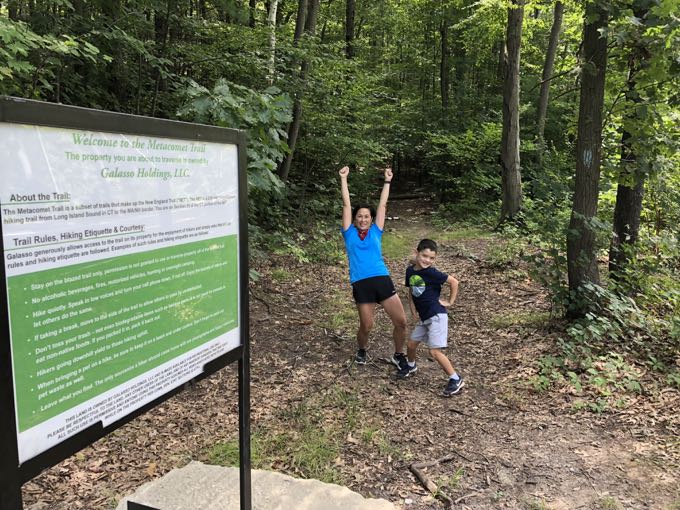 Continue on to Section 14: Another Notch in Our Belts