In a Bush League of Our Own
Bush Hill Farm, Glastonbury & Manchester
January 2017

As I scan through my (way too many) pictures from our day out at Bush Hill Farm, I’m most inspired by Calvin’s red coat. It makes many of my hastily taken iPhone photos just… just look better. I recommend you buy red coats for your children for this express purpose. 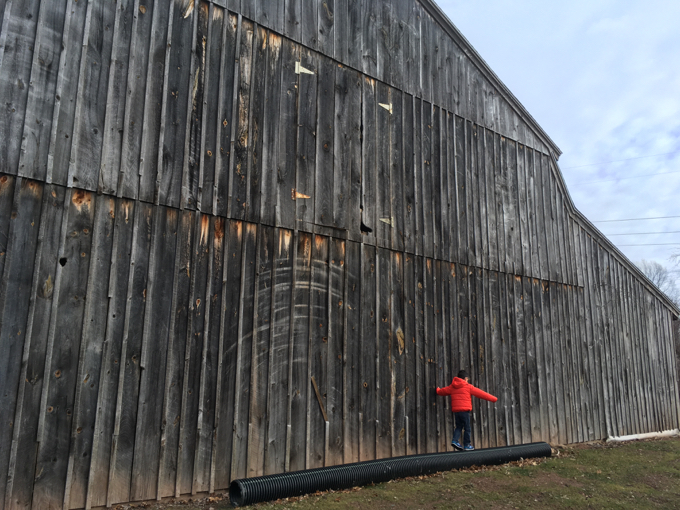 This property is one of the Manchester Land Conservation Trust’s newest acquisitions. It is 62 acres of former farmland in extreme southwest Manchester – in fact, it’s so southwest that it bleeds over into Glastonbury. Here’s a little history courtesy of the MLCT:

The Botti family farmed this acreage starting about 1912 – growing apples, peaches, cherries, and blueberries as well as vegetables – but the orchards are no longer productive. The Land Trust plans include restoration of the orchards and community farming in addition to the 2+ miles of hiking trails. Some of the old fruit trees still grow on the property, and there are quaint barns and a farm pond. Bush Hill itself is on this property – the highest point in the southwest section of Manchester. 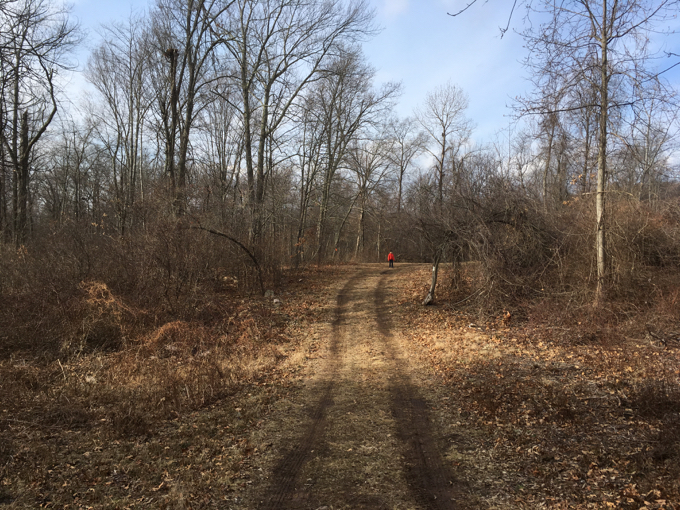 Well folks, my sons and I have climbed the highest point in southwestern Manchester, Connecticut. I can’t wait to tell them tonight. 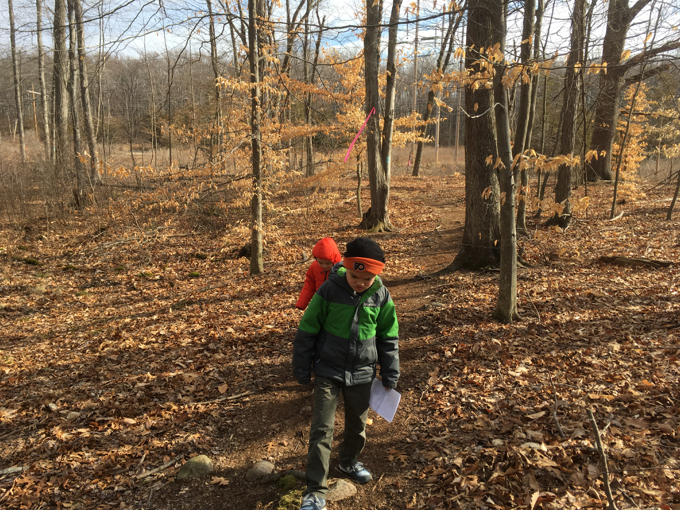 Have you ever wondered what maintaining open space costs? Here’s a little peek into this world:

… at a purchase price of $915,000. The State of Connecticut DEEP granted $594,750 and the Town of Manchester granted $98,000, both through open-space-purchase programs. Stipulations of the State grant include razing the existing farmhouse which, with other expenses, may cost the Land Trust several hundred thousand dollars. The Conservation Fund, a non-profit environmental organization in Arlington, VA www.conservationfund.org has provided a $210,000 loan as “bridge financing,” and the Land Trust is undertaking a $500,000 fund-raising campaign.

As an avid land trust hiker, I want to say thank you to the tireless efforts made to make these places happen. Grant writing, surveying, lobbying, etc. Well done to the MLCT! 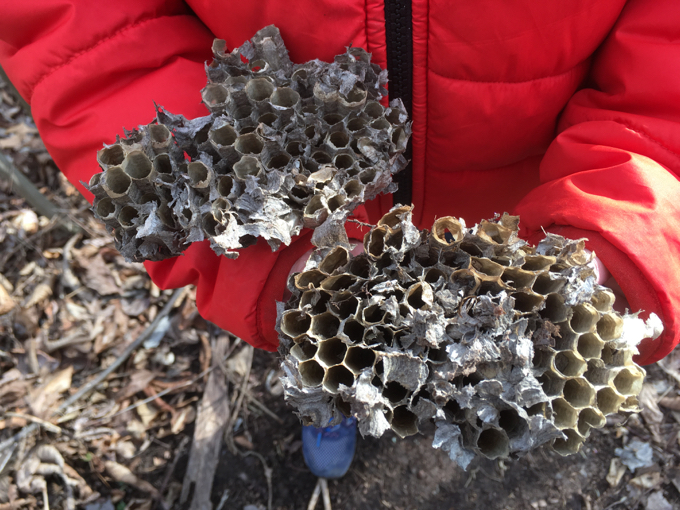 And the property itself is quirky, fun, and interesting.

Damian started this one off on the wrong foot and it took him a while to get going. We hiked the property counter-clockwise – saving the highest point in southwestern Manchester until the end. No-brainer.

From the parking area, the trail seeks to find its own path and wonders across and off of old woods roads and powerline cuts. The trail here was brand new in late 2016, as it was evident that many saplings and even smaller trees were cut to clear the path. 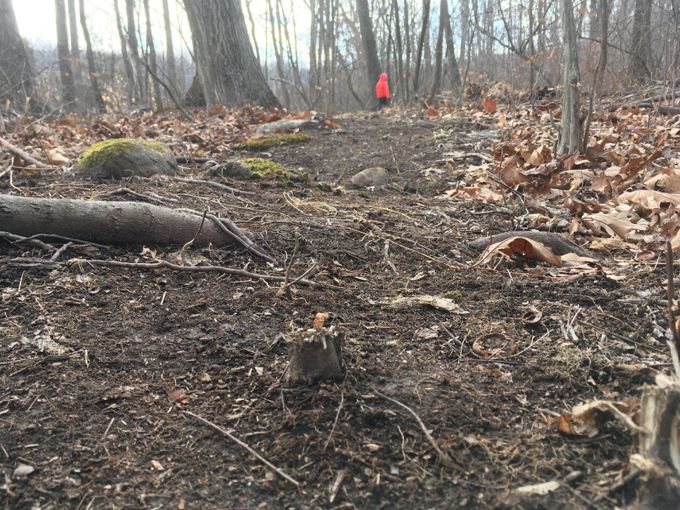 For whatever reason, Calvin was fascinated with the little tree stumps and felt the need to point each one out to me. It had something to do with his desire to be a Trail Ninja. And Trail Ninjas are hyper aware of anything that could bring misery upon a hiker. So by avoiding the endless pitfalls that can come with little mid-trail stumps, he was attaining his lofty title of Trail Ninja.

We also found the remnants of what must have been a rather large paper wasp nest. Calvin, as any 5-year-old should, wanted to bring it home to show Mama. She loved it. 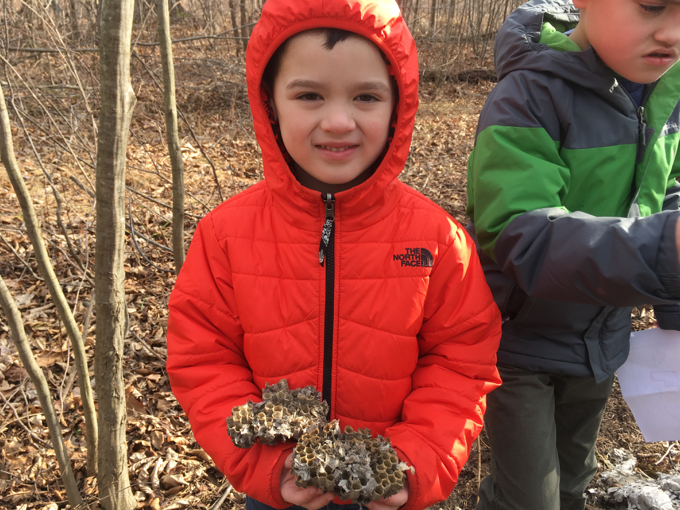 The trail wound its way towards some houses and then crossed a brand new bridge as it neared the Glastonbury border. How do I know this? Because the MLCT (I assume) cleared a short little spur trail up to an old border stone. Huge props to the MCLT for doing this, as literally everyone who ever makes their way to the extreme southern reaches of Bush Hill Farm will surely appreciate this little detail. Calvin did: 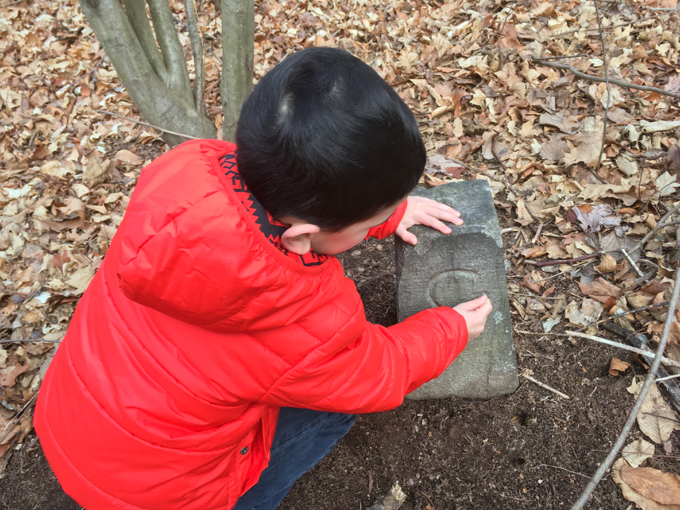 That’s a G for Glastonbury

(Although, can I call attention to something the MCLT did that drives me bananas? Their map of this property is oriented to the south. Grrrrr.)

We cut a corner and made our way up to a place that I’m not so sure we’re supposed to see quite yet. Surely the farm dump will be cleaned up over the course of 2017-18 or so, but for now, there are a bunch of rusted out shells of farm trucks and tractors and such. 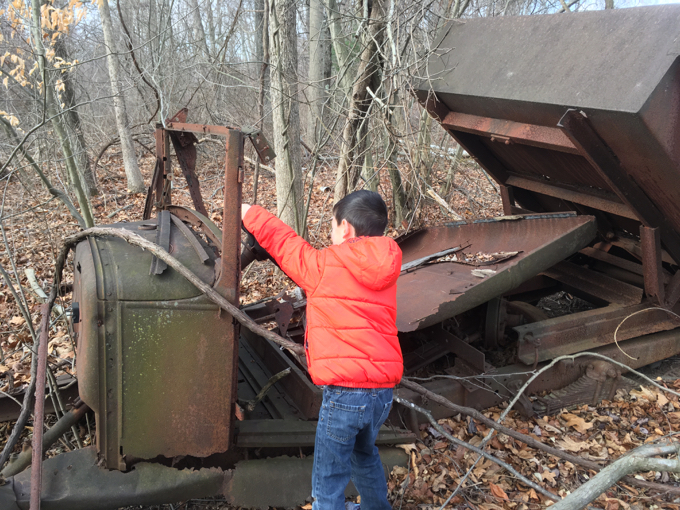 What’s a little tetanus among family?

I cut the corner in order to check out “Frog Corner.”

I have no clue what Frog Corner is. Or why it is. I can, however, confirm that it is. And here it is: 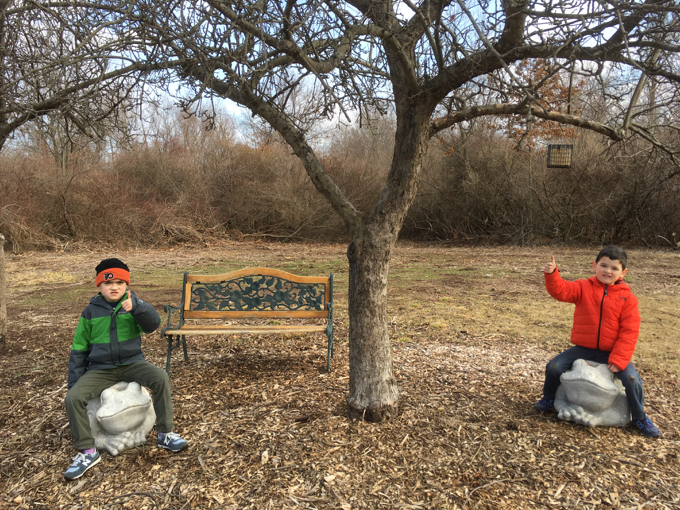 That’s right. There’s a bench. And two large stone frog statues that my children are sitting upon underneath a bird feeder on an abandoned farm in extreme southwestern Manchester. 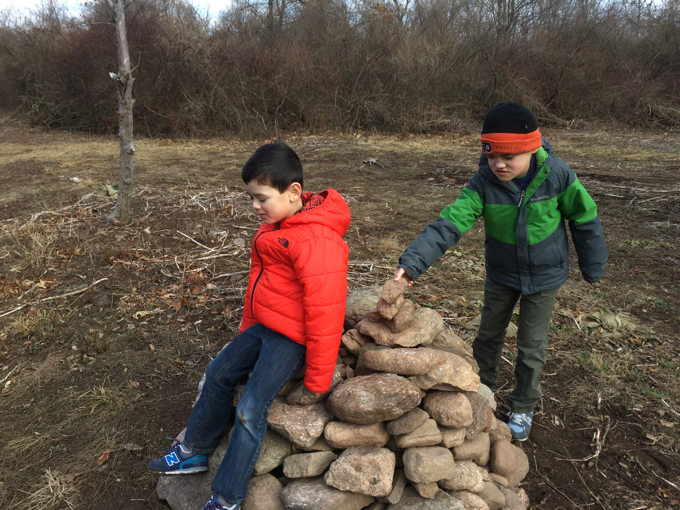 And a “Frog’s Corner” sign that has seen better days. 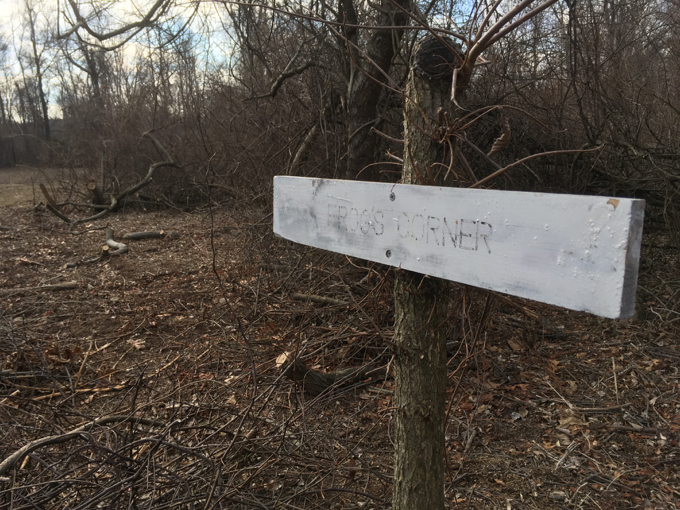 And it’s surrounded by farm junk and scraps and brush piles and old tires. 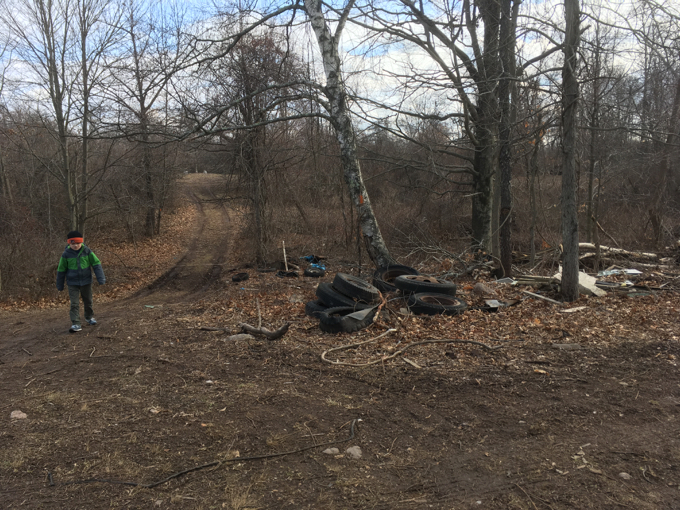 And a hunter’s stand. 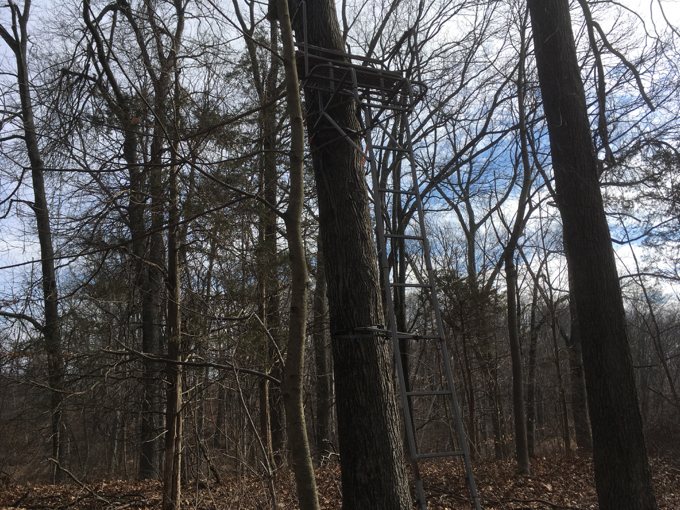 We moved on along a farm road; down into a little swale. I saw a herd of deer over yonder and excitedly told the boys to “look over there! In that field! So many deer!”

Calvin, who hasn’t yet seen Stand By Me and its iconic deer scene decided to say hello. 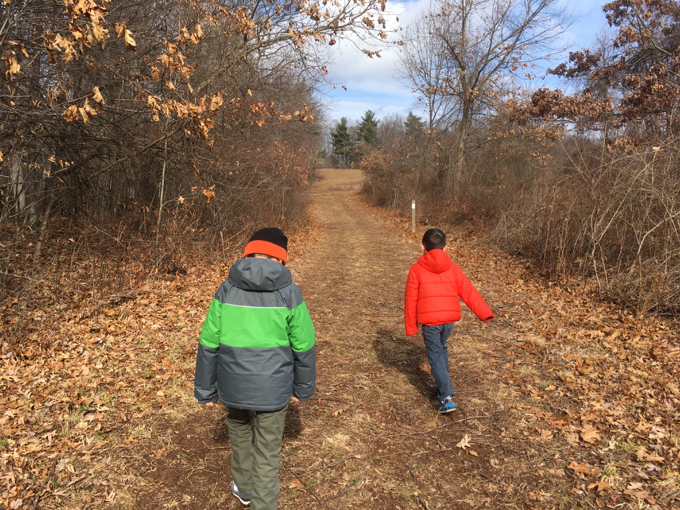 From there, we scampered up… what must be THE Bush Hill.

It’s… a hill. And there are some old farm buildings. 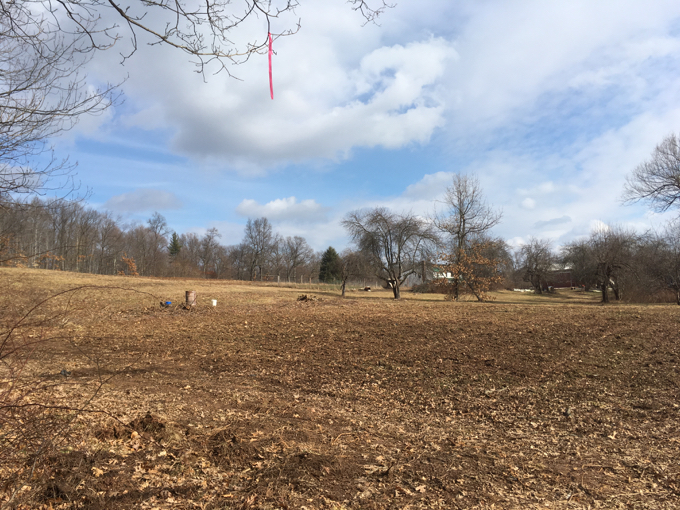 There are a few trails in this part of the property; some offer short cuts but they are so similar to the “outer” trail that I don’t really understand the point of them. They all meet up atop the hill and take hikers down an old road towards some houses where people still live.

Not just people… but also goats and chickens! 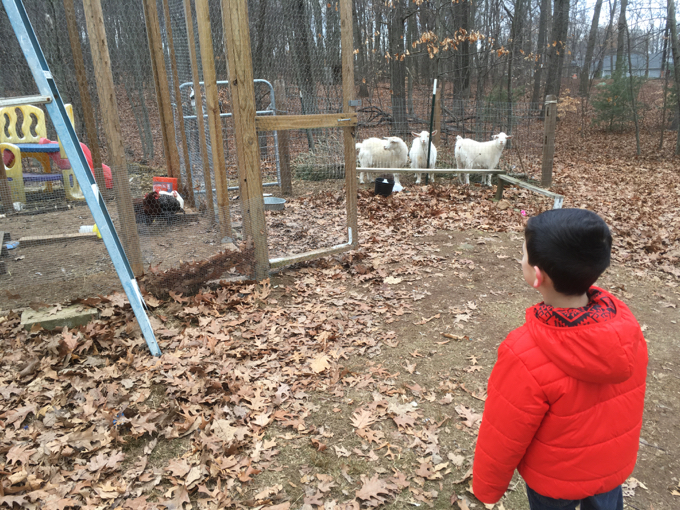 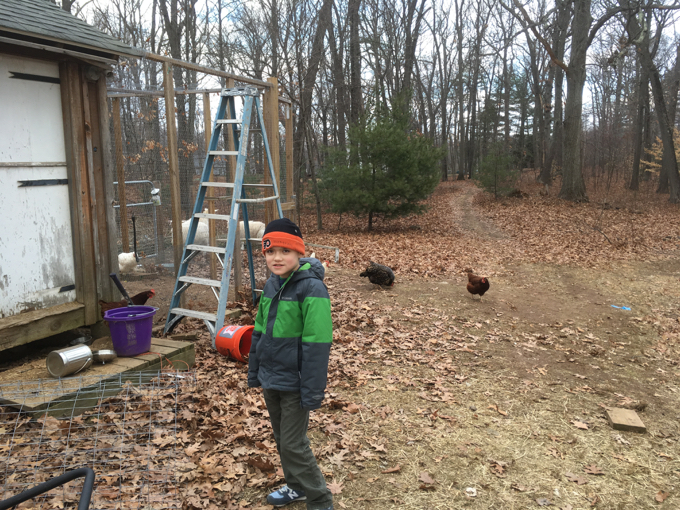 The boys loved the animals, but we were slightly off the trail and quite literally in someone’s backyard. I’m not a fan of that, so I hurried them along back to the trail.

The true trail, which I’m sure no one ever follows, turns away from the houses and back onto the old farm property as it approaches the hiker’s lot. People SHOULD follow this as continuing straight on the old farm road brings you fairly close to backyards. 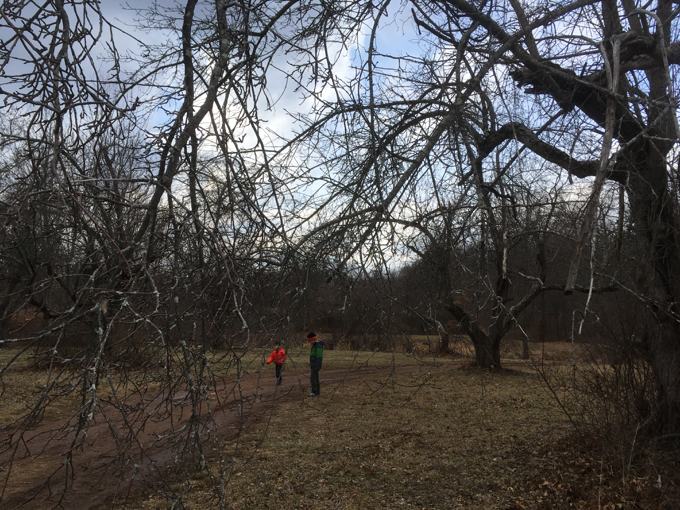 Once my sons caught sight of the car, there was no way they were going to take a ten minute detour back into the old orchards and stuff. Sorry.

If I had the time and wherewithal, I think it would be really cool to rehike Bush Hill every year for the next 30 years. I’m sure it will undergo some pretty significant changes and that will be fun to see.

Just keep me updated and make sure no one takes the stone frogs. 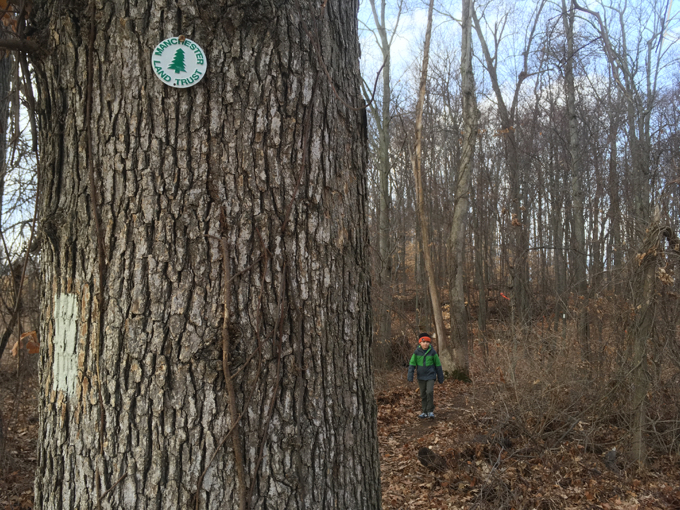