This isn’t a typical CTMQ page in that a) it contains no puns or satirical quips, b) I didn’t write most of it, and c) the photography is phenomenal. 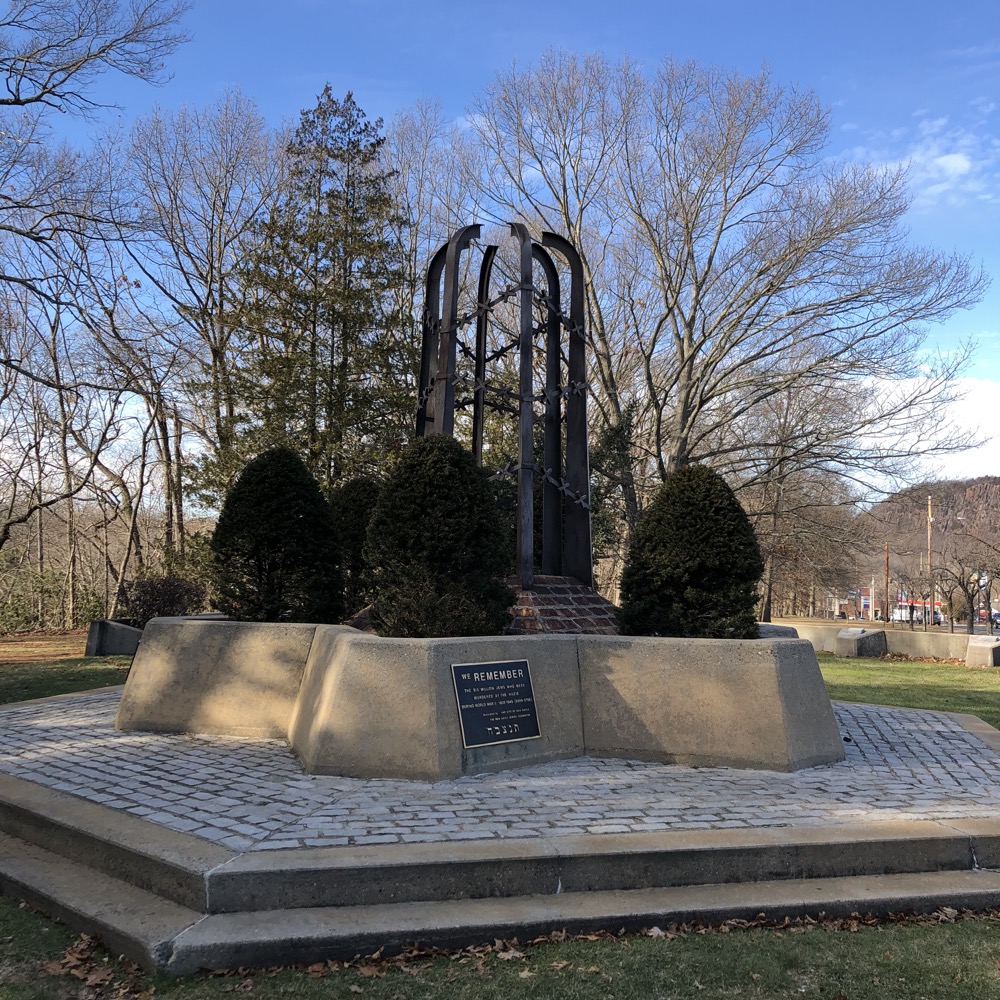 Okay, c) above is not true and it could be categorized as a satirical quip. I guess I simply can’t control myself. Sigh. I visited this sobering memorial, located in Edgewood Park on Whalley Avenue in New Haven, after a fun hike and before a trip to Ikea. But I made time for it. It’s starkly beautiful and intensely powerful. The plaques are direct and to the point: The Nazis murdered over six million Jews simply because they were Jewish.

I visited at the very end of the Trump regime debacle; a period of time when actual American Nazis have committed anti semitic and racist attacks because the white supremacist president gave them license to do so. I walked around the memorial and read the signs, looked off into Edgewood Park at the dog walkers and joggers just thinking about what’s wrong with humans.

My conclusion? A lot. I had Calvin with me and we had a(nother) long talk about racism and hatred and what the Holocaust was and how people just sort of went along with it in Germany and Poland and elsewhere. I don’t think a nine-year-old can wrap his head around a number like six million, but I think he got the point. 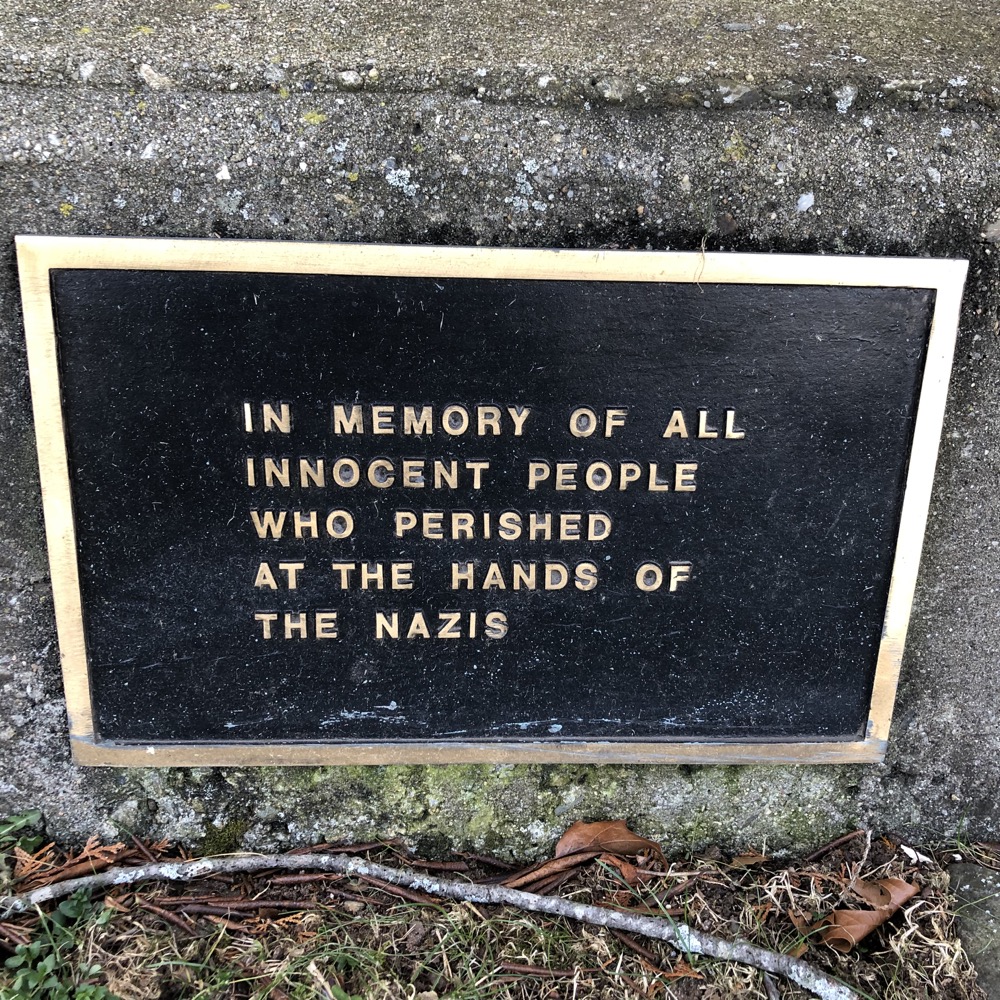 This memorial lands on CTMQ because it is a US First (and oldest). I’m happy for that because I feel this is an important memorial, but also because it gives me license to write the sentences two paragraphs above on a website on which I usually try to bottle my politics a bit. The following is from an article by the Jewish Federation of New Haven. People, be better to each other. Thanks.

The New Haven Holocaust Memorial was the first such Holocaust memorial built on public land in the United States when it was dedicated in 1977.

In 1967, about 70 families from the New Haven area met and decided to construct a memorial for the loved ones they lost in the Holocaust. Each week, each family donated $1 to purchase materials for the memorial.

In 1977, then-Mayor Frank Logue appointed a committee, which included those families, to erect a memorial to the six million Jews murdered by the Nazis in the Holocaust.

It was the first time a municipality, in cooperation with the local Jewish Federation, erected a monument on city land in memory of the six million Jews.

The committee included a diverse cross section of the community, including Christian and Jewish leaders, clergymen, business and civic leaders as well as Holocaust survivors.

The Jewish Federation was looking at many different park areas in the city to plant a grove of six trees in memory of the six million who perished. The Federation worked with a landscaper named Marvin Cohen, the owner of Cheshire Nursery. Cohen then consulted with his friend, a young, gifted architect, Augustus “Gus” Joseph Franzoni, on an appropriate marker for the site.

Franzoni spoke at length with Cohen about the Holocaust and then contacted the Jewish Federation to look at some published materials about Nazis and the Holocaust.

After looking at these materials and reflecting on what he learned, Franzoni poured out his anger and sorrow into an architectural rendering of a simple, yet stark, memorial that captured the essence of the most catastrophic event in Jewish history. At the Mayor’s first committee meeting, Franzoni’s stunning design was approved immediately without any changes.

The group decided to build the memorial at the corner of Edgewood Park on Whalley Avenue, a spot where thousands of New Haven residents and others would pass daily. Thanks to the strong leadership and support of Logue, the proposal passed quickly through several necessary city committees.

While New Haven’s monument was the first Holocaust memorial to be built on public land, not a dollar of public funds was used to build it. Franzoni donated his time and the plans for the project. The project’s contractor, George Skolnick, provided the building crew and supervision of the project at below cost and volunteers from a wide cross section of the city covered the cost of the entire memorial by raising money and going door to door for funds.

On April 15, 1977, ground was broken for the memorial as part of the city’s annual memorial service, which was sponsored by the New Haven Jewish Federation. The memorial’s construction proceeded in the summer of 1977. The memorial was formally dedicated in ceremonies on Oct. 30, 1977. More than 1,000 people attended the ribbon-cutting ceremony. The event received state-wide media coverage.

Mayor Logue with then-Jewish Federation President Herbert D. Setlow unveiled the plaque which reads, “We remember the six million Jews who were killed by the Nazis during World War II – 1939-1945 (5699-5705). Erected by the City of New Haven and the New Haven Jewish Federation.” 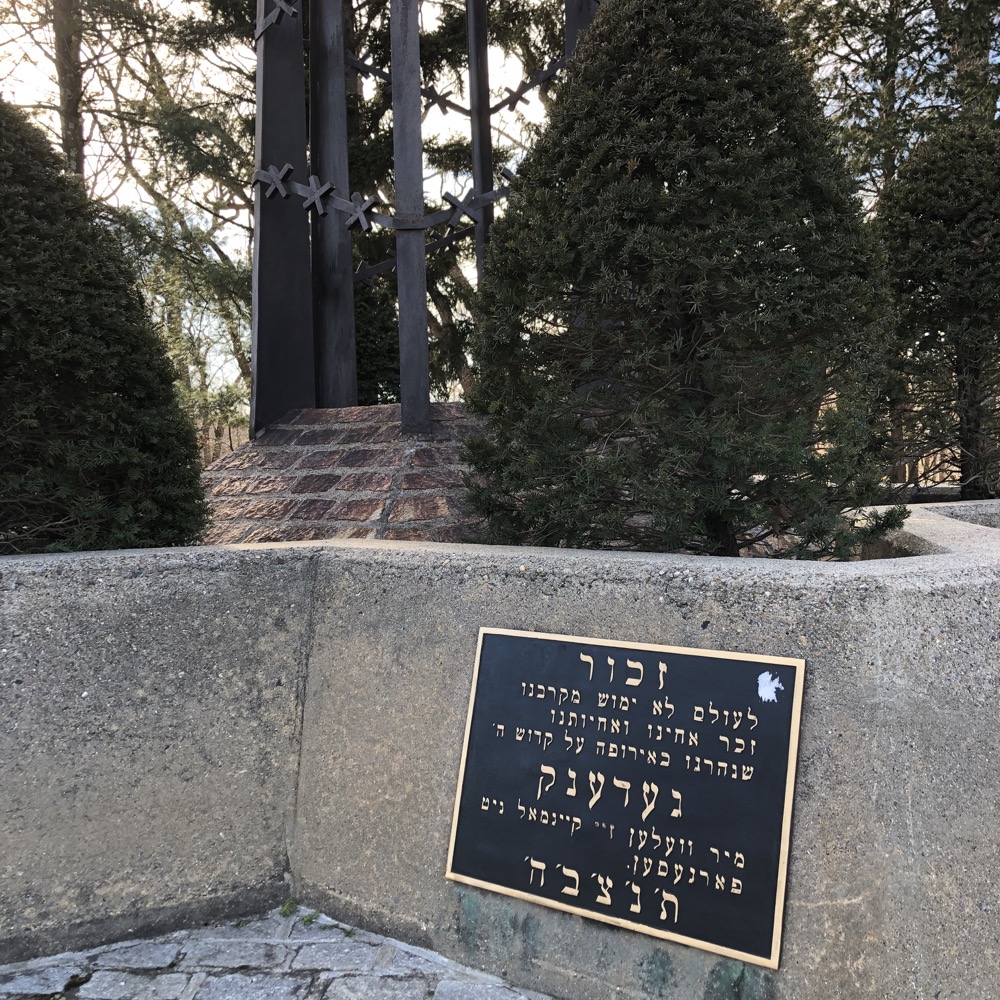 Buried at the center of New Haven’s Holocaust Memorial is a shoebox of ashes collected from Auschwitz Birkenau. The shoebox is surrounded by a concrete Star of David that forms the base of the memorial. Surrounding the center are curved, metal beams with symbolic barbed wire that represent Jewish imprisonment. Six center yew trees memorialize the six million Jews who were murdered. Eighteen plaques, symbolizing the 18 different concentration camps, surround the memorial. Two bushes, whose planters are adorned with plaques, sit close to the memorial to honor the rescuers and others who died at the hands of the Nazis.

In 2007, the group enlisted the help of New Haven architect Eric Epstein, who volunteered his time to oversee the refurbishment and to design a traveling exhibition about the memorial entitled “Memory and Legacy.”

For the last 10 years, the educational and emotionally moving audio-visual display of archival photographs and oral histories has been used as part of the New Haven Public School’s curriculum and shown at 35 locations across the state, including the Jewish Community Center of Greater New Haven, colleges, houses of worship, government buildings and private businesses. A documentary film on the evolution and aftermath of the New Haven Holocaust Memorial was released in 2015. 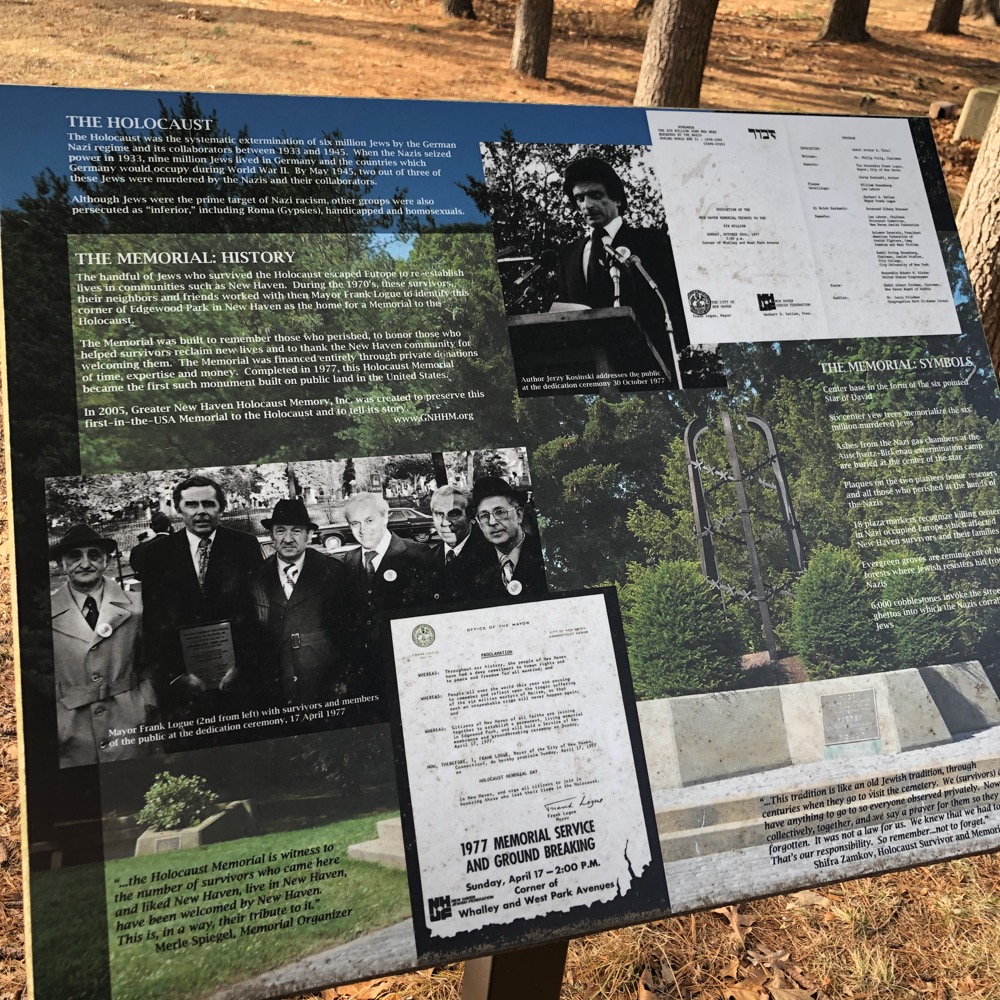