I hike a lot. I don’t necessarily mean miles upon miles, but rather, lots of different little trails. Many would suppose that they all run together and become repetitive after a while. Many would be wrong. 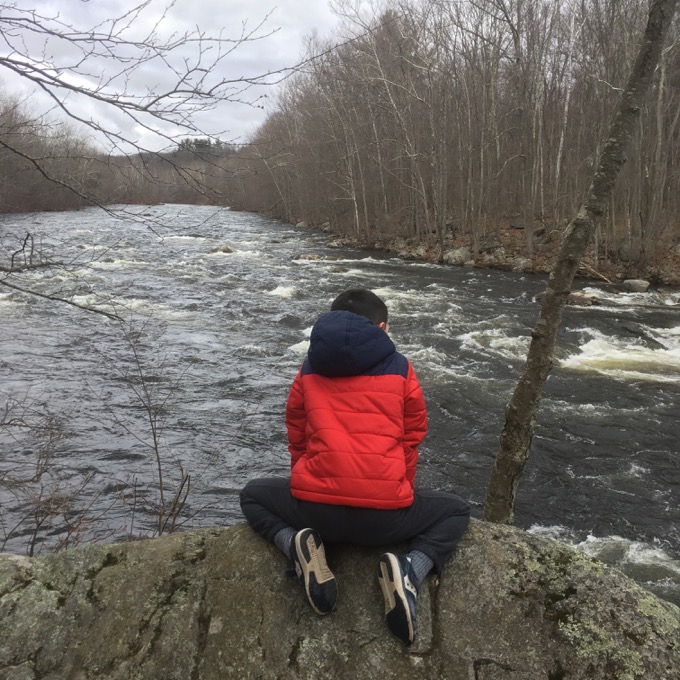 It’s not just that each trail has something unique and/or interesting, it’s often who I’m with. And that almost always means one or both of my sons. As you may know, my older son has significant special needs. “Globally disabled,” as they say. Getting him into the woods has been very important to me over the years, even though it’s often quite a struggle.

So the times I hike with only Calvin, my younger son, I experience an entirely different dynamic. My time isn’t consumed with keeping Damian focused and safe. It’s a nice change of pace and I love spending time in the woods with Calvin sans the Damian stress. 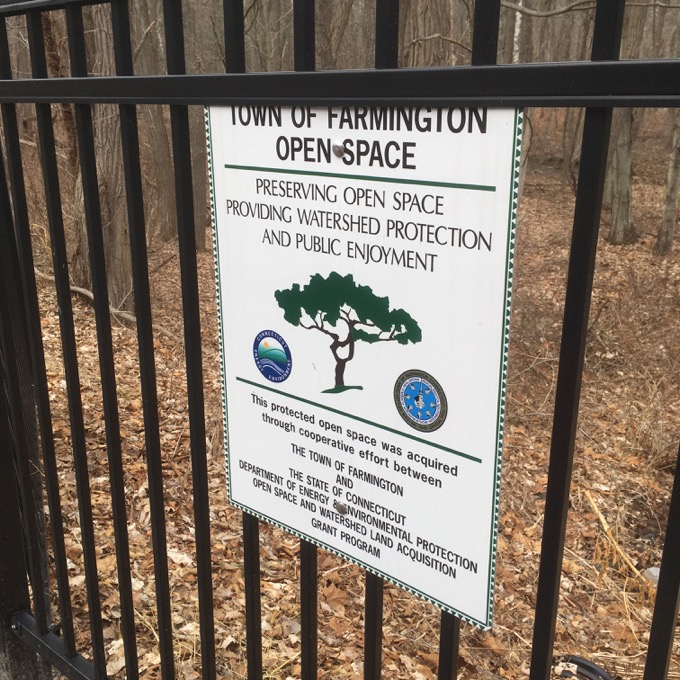 And yet… and yet I always come home sort of bummed out. Bummed out for Calvin that he has an incredibly difficult brother. Bummed out that Damian’s brain disallows him to simply enjoy the goofy silliness his brother is wonderfully capable of. Oh well.

To access the Power Dams trail, you must spend some time on the paved Farmington River Trail. I had warned Calvin that we were going on a “boring hike” (incorrectly, as it turned out) and he rightly wondered, “why do we have to go on boring hikes?”

“Because I hike every trail.” 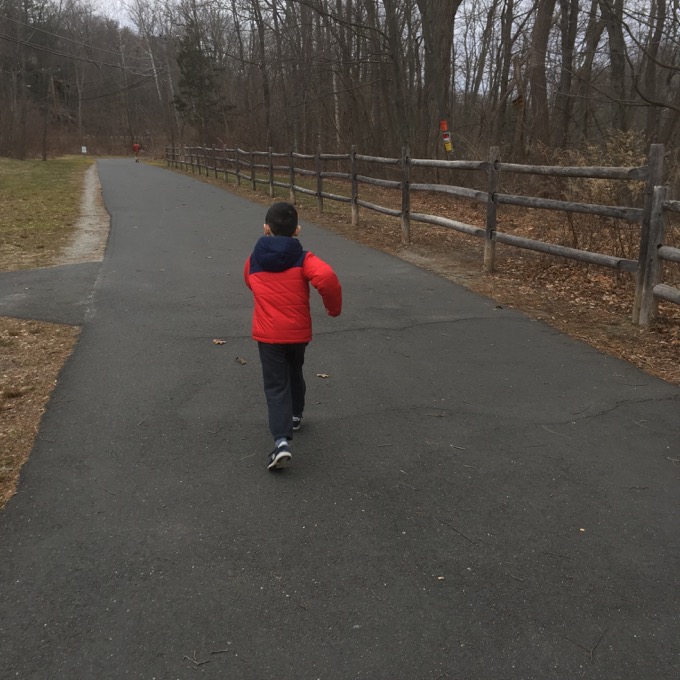 Oddly, Calvin seemed to accept that without further question. We parked and began walking north on the paved path. This was, of course, the “boring” part I had warned him about. And yet, I got to enjoy his many impressions of how his friends run. Or various inhabitants of the Marvel Universe. His eye for subtle differences and rather developed gift for physical comedy are always amazing to me.

If Damian were with us, not only would be going at less than half our pace, but any of this “out of the norm” walking is “not allowed” in Damian-World. Throw in the fact that were are lots of other people along this trail, and this short, flat walk would have been disastrous. I know that doesn’t make sense to y’all, but nothing about Smith-Magenis Syndrome makes sense.

As it was, Calvin was free to flourish. 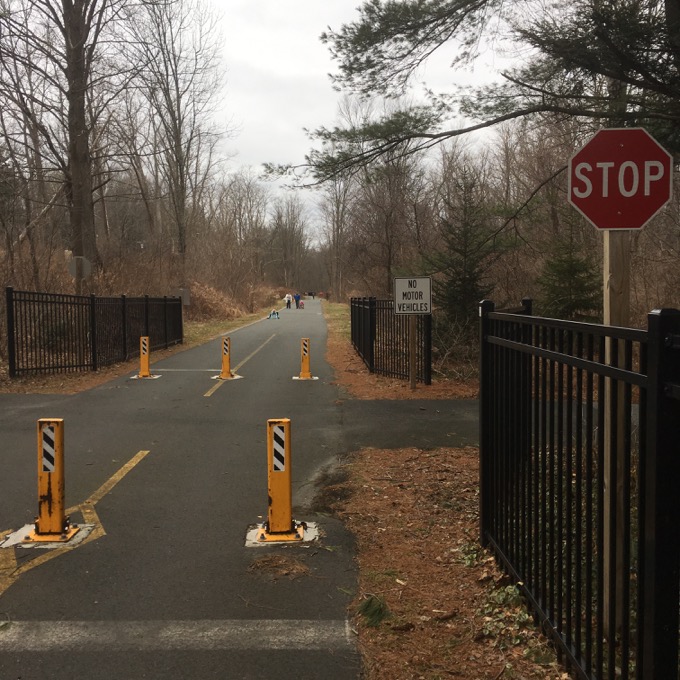 The most interesting thing on this first stretch is that someone lives between the paved trail and the Farmington River. The care and expense paid to give their driveway a safe crossing is impressive. In fact, the fencing, stonework, and general condition of the trail is also impressive.

But we were looking to get to the path into the woods. We both much prefer being away from the crowds and amongst the trees. That way, my young Jedi can “fight” all sorts of “enemies” without exposing his secret training to passersby. 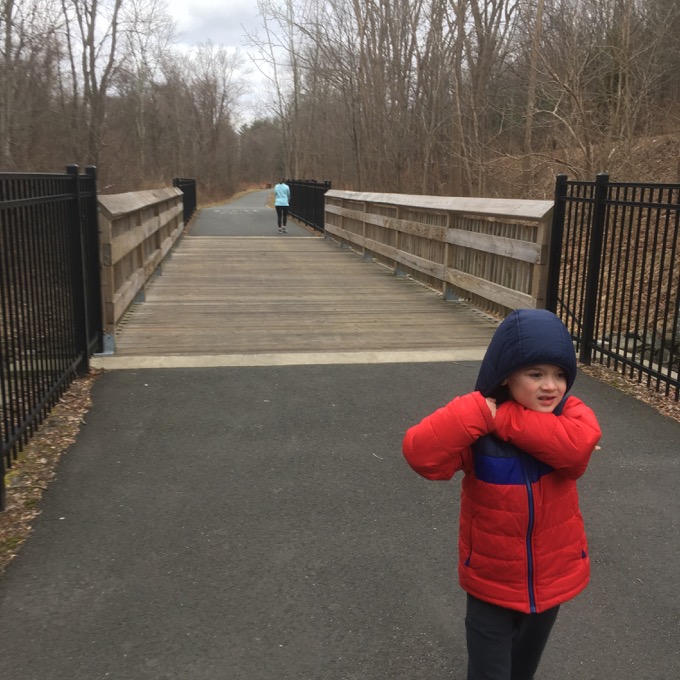 There are several (seven in total, I think) wooden obelisks along the trail. I took a picture of each one thinking that they meant something. It turns out that they don’t mean anything at all. They are simply waymarkers telling hikers to “turn left and keep following the trail” which I find really odd. (It’s an unblazed trail, but very easy to follow.) 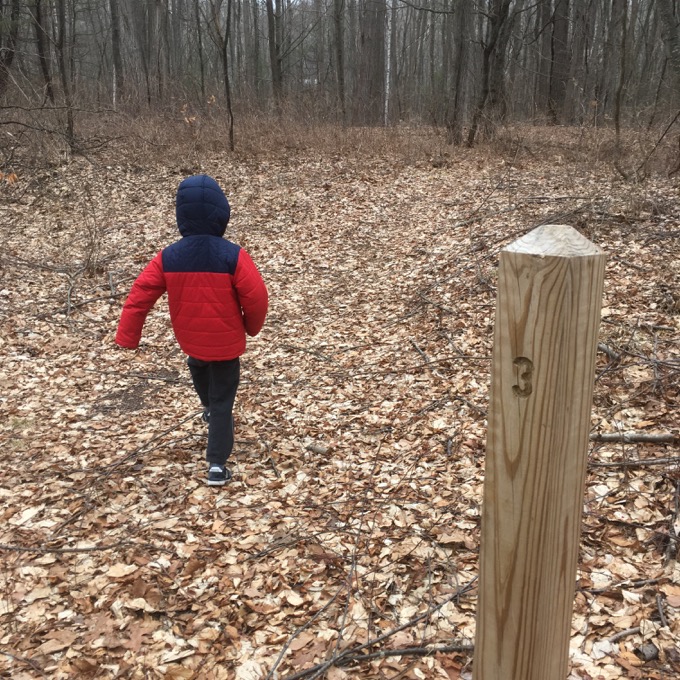 We checked out the river at the outset, but it wasn’t too exciting there. The rest of the trail meanders parallel to the river to the left and the paved path to the right. We were near the section of Farmington known as Unionville. Let’s learn a bit about Unionville and why this trail exists.

Unionville became the industrial section of Farmington starting in 1832 because it had the two important requirements: water power and access to a modern transportation system. Transportation arrived in 1828 when Unionville?s Feeder Canal provided the water for the Farmington Canal, connecting Unionville to the seaport located in New Haven. Trade developed and a dam was completed in 1832 to harness the water power of Unionville. 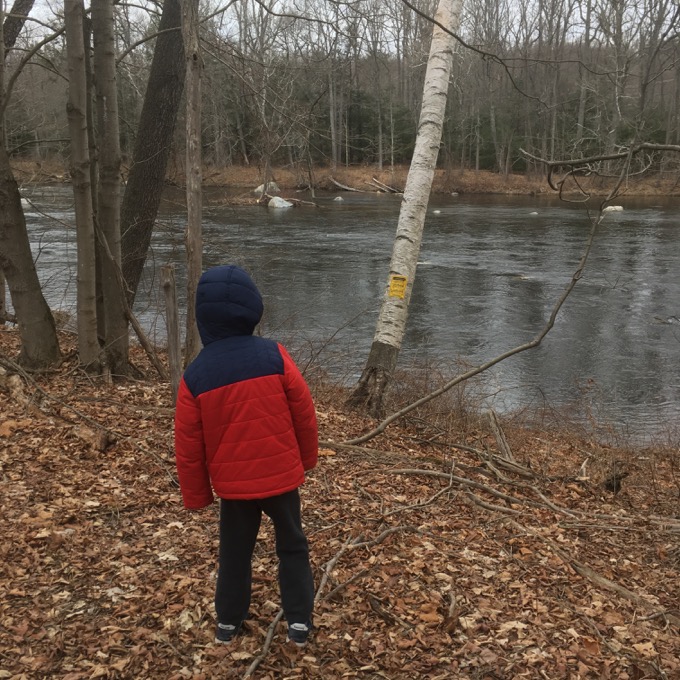 That would be the second “power dam” of the trails name. We’ll get to where it was in a minute. The first power dam was built circa 1780 pretty much where the second one was later built.

Along with the dam, they built a canal with a storage basin with 8 head-race canals for factories. These canals emptied into a lower canal that had 4 additional head-race canals. In 1832 an advertisement was placed in the Hartford Courant selling and leasing water privileges on these head-race canals of Unionville… “a very low price, if you apply soon”. 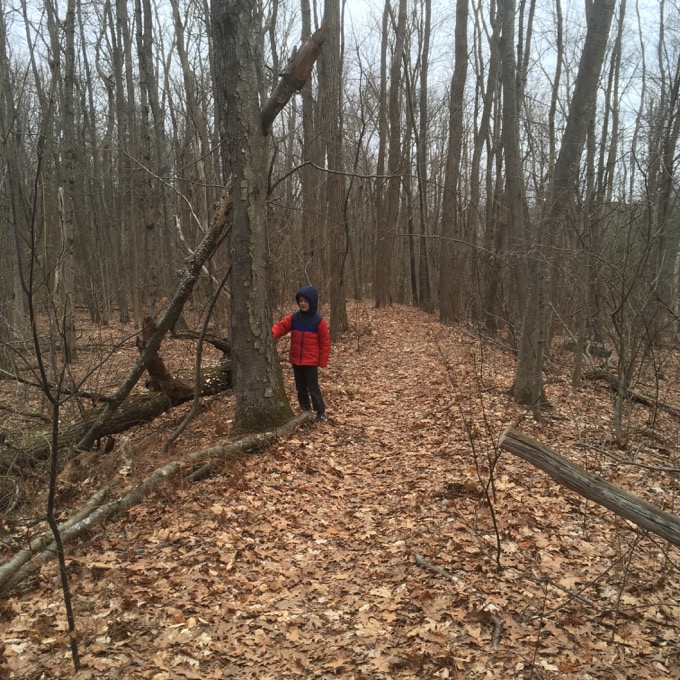 The railroads came and the canals went. Industrialization went bananas and more power was needed.

In 1856 James Cowles built a new dam upstream from the old one to increase the power capacity in Unionville. The new dam raised the level of the water higher than the railroad tracks that followed the river. As a result, they needed to also build an earthen dam between the river and railroad.

And that earthen dam still exists. In fact, the Power Dams trail takes hikers along the top of it for a good stretch, which you can kind of see in a few of my photos. After walking the length of the earthen dam, which was needed after building the “real” dam, we came to the remains of the third and largest dam. Damn. 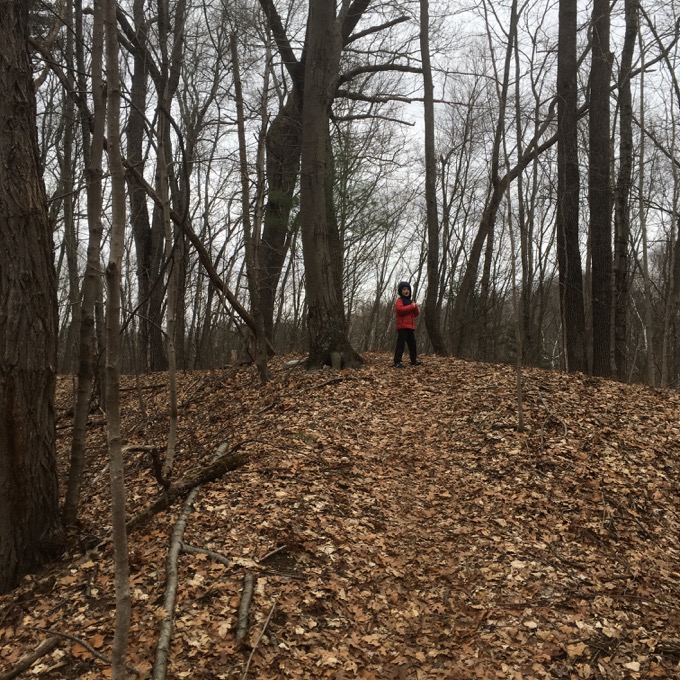 This trail is (yet another) Eagle Scout project I have benefitted from. This time its hats off to Mr. Satchel Moll of Unionville’s Troop 170. When he created it, the numbered posts were at trail junctions that I’m guessing were difficult to discern or something. Young Satchel is also responsible for an informational sign in the woods, which explains all about the industrial and dam history of this area. 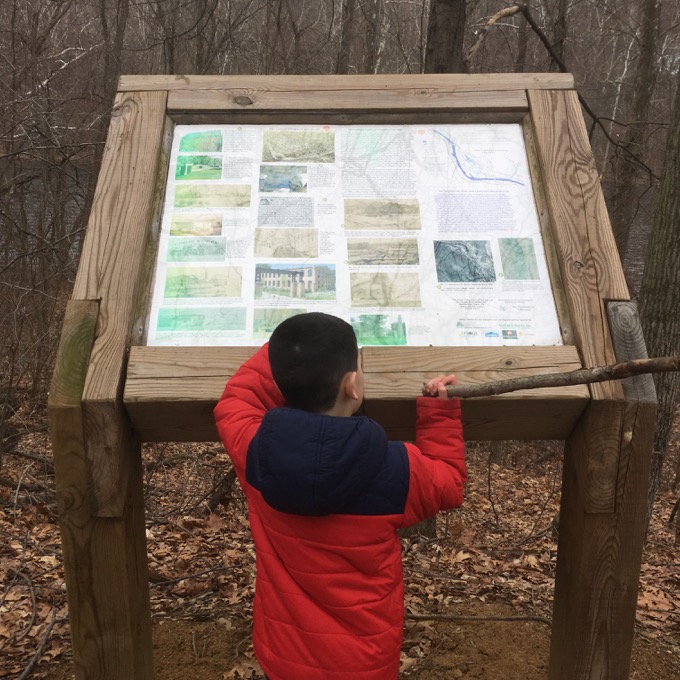 I guess he didn’t expect six-year-olds to want to read it though.

We picked our way down to the river and looked at the abutments of the old dam. Calvin threw a rock. Getting back out to the paved path wasn’t too difficult in March, but man… this has to be a mess come summer. Tons of multiflora rose and Japanese knotweed choke this area. Good luck to whomever is in charge of maintaining this year-round. 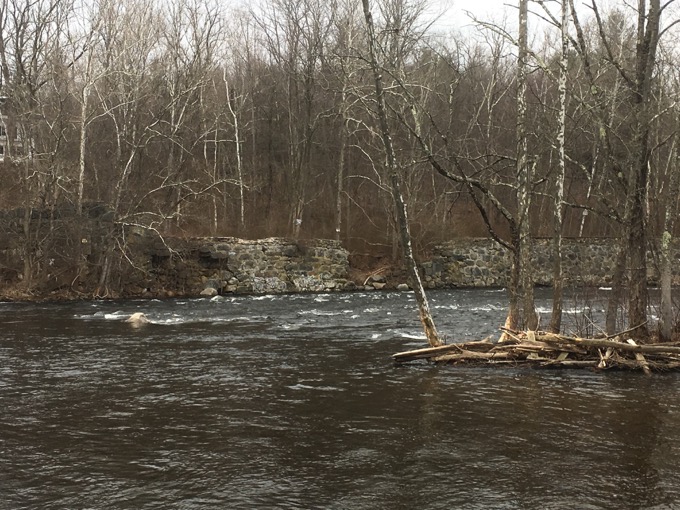 We finally made it back to the site of the first power dams at the rocky shore of the river. Suddenly, the “boring hike” became not at all boring. This is Calvin’s playground. The sudden and surprisingly rugged little outcropping is both beautiful and dangerous. They poke out over the river’s rapids omninously; offering a stark contrast to the bucolic suburban framework that is Unionville and greater Farmington. 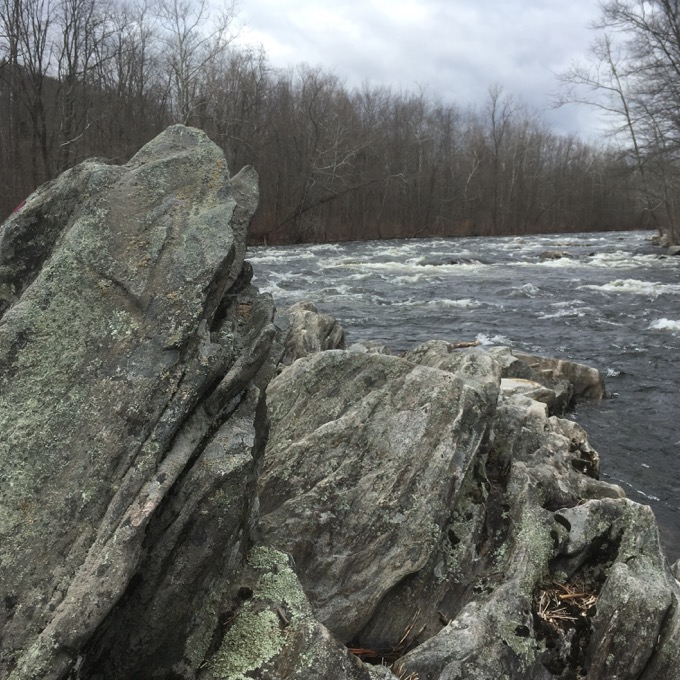 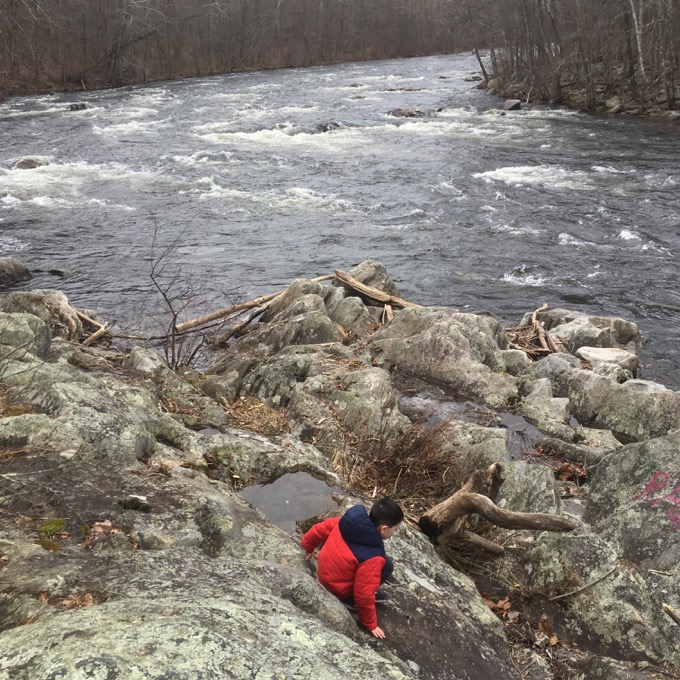 Calvin found a little hut that someone recently (maybe) slept in. It was well-made, safe, and in a pretty cool spot above the rocks. Calvin walked right in and found it interesting, but didn’t share any desire to actually live here. 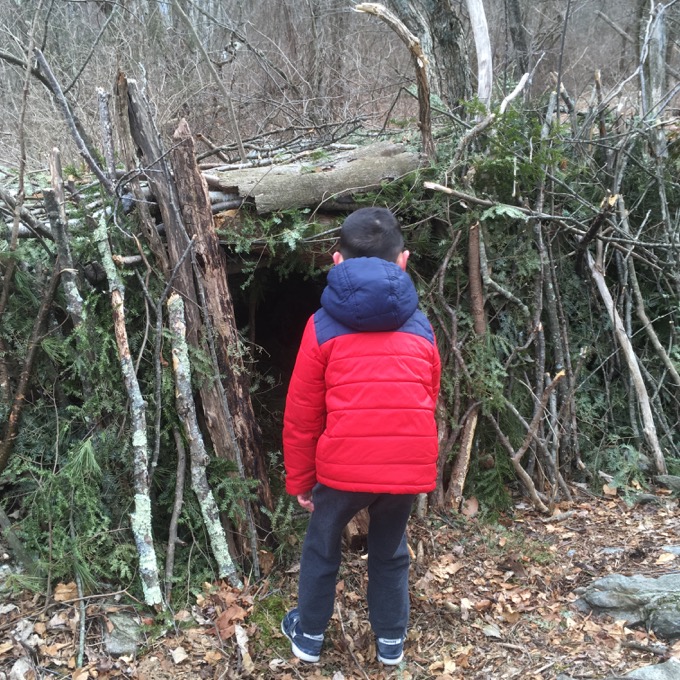 Damian would have hated this. Too loud. The rushing water below is hard for him to adjust to. He’d have been tired after the two miles it took to reach this point. So on the one had, I’m happy he wasn’t with us; probably ruining Calvin’s adventurous exploration. On the other, it kills me that these simple childhood experiences are so rare for me and Calvin to enjoy on our own. 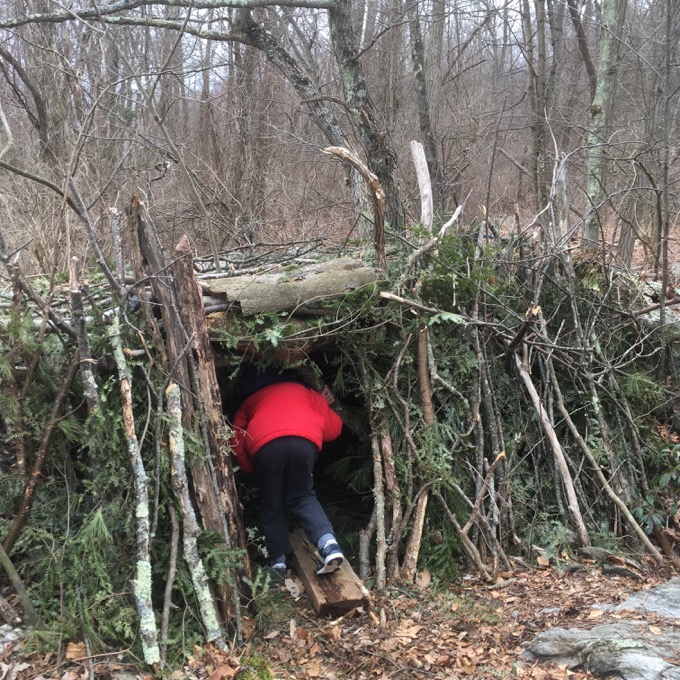 Because I want to have Damian with us. Except when I don’t.

From the same parking lot, you can continue through the Art Tunnel and on to the Taine Mountain Trails if you’d like.